Aging is one of the most fundamental biological processes. It results in a decline in physiological function and an increased risk for pernicious diseases such as cancer. Oxidative stress has been proposed as a major cause of aging, but experimental tests of this hypothesis have been discouraging. Calorie restriction (CR) prevents age-related decline, but there are still gaps in our knowledge of the exact mechanisms underlying this feat. Finally, a tenuous balance exists between aging and cancer, calling for a search for interventions that prevent both aging and cancer. Recent work on the mammalian sirtuin SIRT3 has shed light on these long-standing issues and suggested new approaches to ameliorate the ravages of aging.

How does aging occur? Can we delay the aging process? These are questions that have been asked for hundreds if not thousands of years. Many hypotheses have been proposed, but the majority of them have failed to stand up to further scrutiny. In 1956, Harman proposed the oxidative stress theory of aging, which has gained great popularity among aging researchers [1]. It postulates that the production of reactive oxygen species (ROS) is the major determinant of lifespan. ROS can be produced in multiple compartments within cells, but mitochondria account for over 90% of ROS generation [2]. Counteracting cellular ROS are antioxidant enzymes such as superoxide dismutases (SODs). The level of cellular ROS is determined by the balance between the generation of ROS and its detoxification.

A potential explanation for this controversy has emerged from recent studies on the mammalian mitochondrial deacetylase SIRT3. Endogenous SOD2 is modified by acetylation. By deacetylating specific lysine residues on SOD2, SIRT3 improves the ability of SOD2 to scavenge for ROS [5,6]. Interestingly, increasing SOD2 expression alone only modestly reduces cellular ROS. However, when SOD2 overexpression is combined with SIRT3 overexpression, the reduction in cellular ROS is much greater. These observations suggest that only altering SOD2 expression is insufficient to significantly reduce cellular oxidative stress, and that it needs to be modified by deacetylation to operate at peak activity. In addition to SOD2, a number of antioxidants such as SOD1 and glutathione peroxidase have been shown to be acetylated [7]. It is possible that these antioxidants are also regulated via deacetylation.

SIRT3: a Missing Link between Calorie Restriction and the Oxidative Stress Response

CR is one of the most robust interventions to consistently extend lifespan across species [8-10]. In mammals, this dietary regimen also results in salutary physiological changes and ameliorates a wide spectrum of diseases associated with aging. CR substantially reduces the steady state levels of oxidative stress and damage. Ostensibly, CR could slow the metabolic rate and reduce the production of ROS. However, despite the attractive simplicity of this hypothesis, it does not stand up to experimental scrutiny. Increasing evidence suggests that metabolic rate does not decrease during CR, and in some cases, even increases [11,12]. How is CR able to reduce oxidative stress without lowering metabolic rate? Does CR accomplish this feat by regulating defined molecular pathways? And, importantly, is lowered oxidative stress essential for the beneficial effects of CR? The recent work in SIRT3 has led to great strides in answering these questions.

Sirtuins have long been associated with CR in model organisms, so it is not surprising that this family of proteins was found to play a pivotal role in addressing the questions [13]. Previously, it had been found that the mammalian sirtuin SIRT1 is required to mediate aspects of the CR response in mice [14,15]. However, it is only with the work of Qiu et al. (2010) and Someya et al. (2010) that a solid connection between oxidative stress and sirtuins in the CR response was made [5,16]. Taking the spotlight away from SIRT1, SIRT3 was found to be essential for CR-mediated reduction in oxidative stress. Qiu et al. (2010) showed that the reduction in oxidative stress during CR was abolished in SIRT3-/- mice. As mentioned above, one mechanism through which SIRT3 reduces oxidative stress is by increasing the activity of SOD2 through deacetylation [5,6]. In addition to regulating SOD2, SIRT3 also reduces oxidative stress by modulating the activity of isocitrate dehydrogenase 2 (IDH2), a mitochondrial enzyme that generates the reducing agent NADPH [16]. Thus, instead of passively slowing metabolic rate, CR induces an active defense program to increase the rate at which destructive oxidizing agents are scavenged, with SIRT3 playing an essential role (Figure 1). 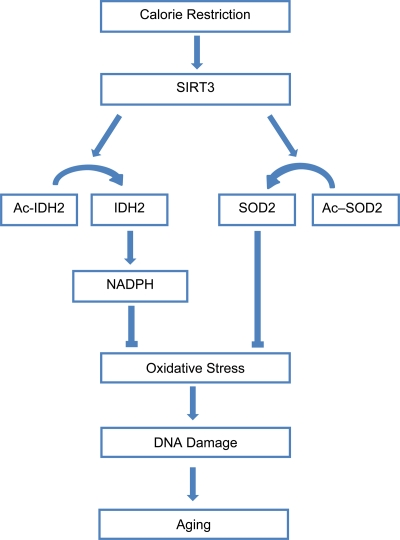 Aging is a multifaceted degenerative process leading to tissue functional decline and increased incidence of cancer. One important mechanism central to aging is cumulative cellular damage, prominently DNA damage [18]. In response to DNA damage, gate-keeping tumor suppressor proteins such as p53 are activated to ensure that potentially dangerous lesions do not lead to tumorigenesis. Although the activation of gate-keeping tumor suppressor pathways has protective effects, under certain circumstances, they may contribute to the loss of tissue maintenance and drive organismal aging through the induction of apoptosis or senescence. Thus, a tenuous balance exists between aging and cancer [19-23]. Interventions that target the gate-keeping tumor suppressor pathways may slow aging at the cost of cancer or vice versa (Figure 2).