Oxytocin (Oxt) is a well known neurohypophysial hormone, playing an essential role in mammalian labor and lactation [1], via its peripheral action. Recent reports have documented the effects of Oxt in the central nervous systems, including maternal nurturing, social attachment [2, 3], and promotion of learning and memory [4]. Moreover, the physiological role of Oxt in the energy metabolism has recently been reported. Fasting decreases and refeeding increases Oxt mRNA in PVN [5]. Intracerebroventricularly (ICV) injection of Oxt reduces food intake [6], while ICV injection of Oxt antagonist increases food intake [6, 7]. The central Oxt-induced anorexia requires the melanocortin pathway [8]. Furthermore, therapeutic potential was suggested by the finding that ICV injection of Oxt suppresses food intake in Zucker fatty rats, a leptin-resistant obese model [8], indicative of the ability of Oxt to evoke its anorectic neural pathway independently of leptin.

A report by Arletti et al. (1989) [6] first documented anorexia induced by peripheral Oxt. The very recent publications have also reported that intraperitoneal (ip) injection of Oxt suppresses food intake [7, 9]. In an apparent discrepancy, mice deficient of Oxt or Oxt receptor developed late-onset obesity without changing food intake [10, 11]. These reports taken together suggest that Oxt is a catabolic, as well as anorectic, peptide, and that Oxt could exert one or both of these effects depending upon the route and/or period of Oxt treatment or deficiency. Mechanisms underlying anorectic and catabolic effects of peripheral Oxt are largely unknown. In this study, we aimed to clarify the acute vs. subchronic effects of peripheral Oxt on food intake and energy balance and the dependency of these effects on the route and method of treatment, and to identify the brain regions stimulated by peripheral Oxt. 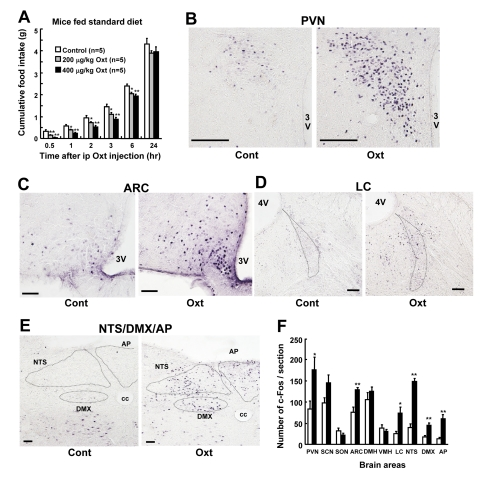 Single subcutaneous (sc) injection of Oxt at 1,600 μg/kg suppressed food intake in mice fed standard diet (Figure 2A) and high fat diet (HFD) (Figure 2B). Repetitive sc injection of Oxt (1,600 μg/kg) once a day for 17 days in HFD-induced obese mice decreased daily food intake for up to day 6 (Figure 2C). At day 7 and later, there was no significant difference between control and Oxt groups in food intake. BW gain also decreased sharply until day 9 after beginning of Oxt injection, followed by a stable period without rebound increase (Figure 2D). At day 17 when Oxt injection was terminated, BW gain was −1.6 ± 0.4 g, which corresponded to −3.6% of the BW of day 0. BW gain didn't recover to the level of control during the period of Oxt injection. Following the switch from Oxt sc injection to vehicle sc injection at day 17, the reduced BW gain in Oxt group continued to be significantly observed for 9 days until day 26 in the absence of Oxt, suggesting a legacy effect (Figure 2D). 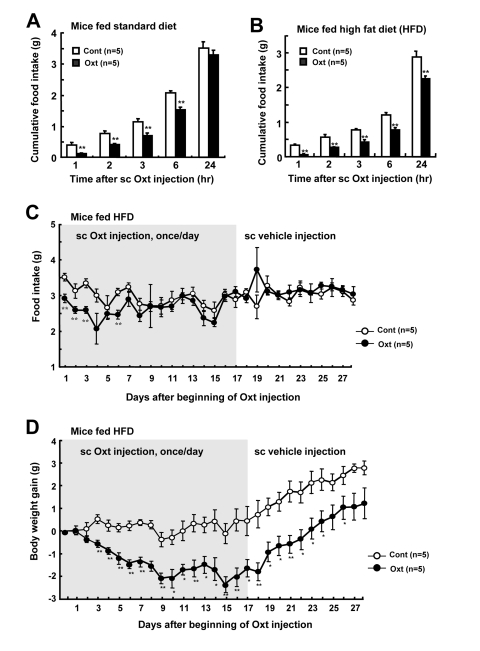 Chronic Oxt infusion (1,600 μg/kg/day) by osmotic minipumps significantly decreased BW gain (Figure 3A) in HFD-induced obese mice. BW decreased rapidly for the first 2 days, followed by a stable reduction (Figure 3A). BW gain was -4.6 ± 1.2 g at the end of Oxt infusion, which corresponded to −13% of the BW of day 0. Food intake decreased for the first 6 days, with statistically significant difference obtained at days 3 and 4 (Figures 3B and C). 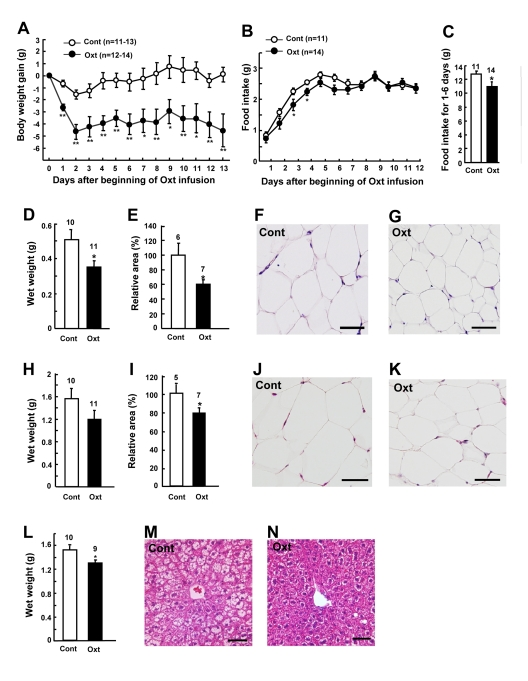 In order to identify the effect of Oxt on different components of energy balance, respiratory quotient (RQ) (Figures 4A and B), energy expenditure (EE) (Figures 4C and D) and locomotor activity (Figures 4E and F) were measured. Oxt infusion decreased RQ specifically in the light phase (Figures 4A and B). EE was slightly increased at several time points in Oxt infusion group (Figure 4C) compared to control group, although no significant difference was observed between two groups when averaged for light and dark phases (Figure 4D). Locomotor activity did not differ between control and Oxt infusion groups (Figures 4E and F). 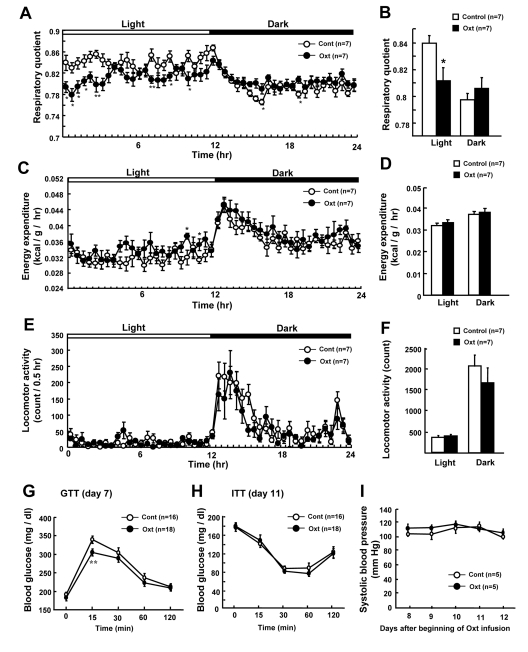 Chronic Oxt infusion by osmotic minipump decreased food intake, BW, and abdominal fat mass, in consistent with the very recent report on rats [17]. Oxt treatment decreased RQ specifically in the light phase (Figures 4A and B), without significantly altering locomotor activity (Figures 4E and F). Food intake in the light phase was not different between control and Oxt infusion groups (data not shown), suggesting that the reduction of RQ does not result from change in food intake. These results indicate that Oxt promotes use of fat as energy substrate in the light phase. Oxt receptors are expressed in adipocytes [18]. It has recently been reported that Oxt induces lipolysis and β-oxidation of fatty acids, and that Oxt reduces fat mass via its direct effect on adipocytes [17]. Taken together, it appears that peripheral Oxt reduces fat mass by multiple mechanisms, including central anorectic action, centrally-mediated activation of sympathetic nerve innervating fat tissue, and its direct peripheral effect on adipocytes, although the action mechanism of peripheral Oxt remain to be further studied.

This is the first report that Oxt improves fatty liver. Fatty liver impairs glucose and lipid metabolism, thereby promoting type 2 diabetes, metabolic syndrome and cardiovascular disease, and also increases the risk of cirrhosis and hepatic cancer [19]. Inhibition of accumulation of fat in liver contributes to prevention of these diseases. Regarding the mechanisms through which peripherally administered Oxt acts on the liver, it has been reported that Oxt directly affects the glycogen synthesis in hepatocytes [20] and that Oxt evokes central regulation of hepatic cholesterol metabolism [21], suggesting possible involvement of direct effect of Oxt and/or indirect action of Oxt mediated by the central nervous system. The fatty liver-correcting effect provides peripherally administrated Oxt with an advantage as a potential agent to treat obesity and metabolic syndrome, although the underlying mechanisms remain to be clarified.

Oxt improved glucose tolerance in GTT, without significantly altering insulin sensitivity in ITT and fasting glucose levels. These results suggest that Oxt could stimulate insulin secretion in response to glucose. In fact, it was reported that Oxt promotes insulin secretion via vagal cholinergic neurons innervating β-cells [22] and that Oxt directly stimulates insulin release from mice islets via phosphoinositide turnover and activation of protein kinase C [23].

We found that chronic sc Oxt infusion by osmotic minipump for 13 days reduced BW of HFD-induced obese mice by -13%, which is greater than the expected level for anti-obesity agents (−10%). Furthermore, the BW-reducing effect by daily sc injection of Oxt lasted for 9 days after termination of Oxt injection, suggesting a legacy effect. Sc injection is an useful route for drug delivery. In the present study, infusion of Oxt at 1,600 μg/day, which elicited anti-obesity effect, was without effect on the normal level of systolic blood pressure, as an indication of safety. It was previously reported that Oxt increased sympathetic tone [10, 24], an effect which could be linked to an increase in blood pressure [24]. However, Oxt at the concentration used in our experiment had no significant effect on the levels of urinary catecholamines (data not shown), suggesting the lack of effect on sympathetic tone.

This study demonstrated that chronic peripheral Oxt infusion ameliorates obesity in the HFD-induced obese mice by reducing food intake and visceral fat mass and possibly by promoting fat usage as the energy substrate, and that these changes are associated with correction of fatty liver and amelioration of glucose intolerance, without altering the normal blood pressure level of this model. Thus, hyperphagia, visceral obesity, fatty liver and hyperglycemia were all ameliorated by Oxt. This study has revealed a profound and stable anti-obesity action of chronic peripheral Oxt infusion, providing the basis for its application to treat human subjects with obesity, hyperphagia and type 2 diabetes.

Male C57BL/6J mice aged 6 weeks were obtained from Japan SLC (Japan). Animals were maintained on a 12-hr light/dark cycle and allowed ad libtum access to water and to either a standard diet (CE-2; Clea, Osaka, Japan) or a high fat diet (HFD) containing 32% kcal from fat (HFD32; Clea, Osaka, Japan) for 8 weeks. Experimental procedures and care of animals were carried out according to the Jichi Medical University Institute of Animal Care and Use Committee.

Following deprivation of food for 2 hr before the dark phase, animals were intraperitoneally (ip) injected with 200 or 400 μg/10ml/kg Oxy (Peptide Institute, Osaka, Japan) or subcutaneously (sc) injected with 1,600 μg/5ml/kg Oxy at the beginning of dark phase. Then cumulative food intake for the following 0.5, 1, 2, 3, 6 and 24 hr was measured. Control mice were injected with vehicle, sterile saline (0.9% NaCl).

HFD-induced obese mice (43.9 ± 0.8 g BW) were sc injected once a day with 1,600 μg/5 ml/kg Oxt or vehicle for 17 days, followed by vehicle injection for 10 days in both test and control groups. Injection was executed at 2 hr before the dark phase, when BW and food intake were measured.

Oxygen consumption (VO2) and carbon dioxide production (VCO2) were measured by using indirect calorimetry system (Oxymax; Colombus Instrument, OH), as previously described [25]. Briefly, HFD-induce obese mice, at day 9-14 after beginning of Oxt infusion, were placed in individual small acryl calorimeter chambers for mouse, with free access to HFD and water. After 20-24 hr of adaptation, VO2 and VCO2 were measured in individual mouse for 1 min at 5 min intervals over a 24 hr period with an air flow at 0.6 l/min. The respiratory quotient (RQ) was calculated as the volume of VCO2 per volume of VO2, in ml/min. Energy expenditure (EE) was calculated as EE = (3.85 + 1.232 × RQ) × VO2. Locomotor activity was estimated by the number of infrared beams broken in both X and Y directions using an activity monitoring system (ACTIMO-100; Shinfactory, Fukuoka, Japan) combined with individual calorimeter chambers.

All data were presented mean ± SEM. The statistical analysis of experimental data for two groups was carried out with unpaired t-test. One-way ANOVA followed by Bonferroni's Multiple Range tests were used to compare multiple test groups.