Oxidative stress is thought to be a pivotal mechanism leading to skin aging [29]. Skin functions as a protective barrier that is essential to life, but the barrier and wound-healing functions decline with age [30]. Because of its high proliferative capacity and susceptibility to carcinogenesis, the skin makes an ideal model of mitochondrially driven cellular senescence in vivo.

We have previously shown an age-dependent increase in the number of senescent cells in human skin [6]. To verify that there is a similar increase in mouse skin, we used senescence-associated beta-galactosidase (SA-βgal) activity to identify senescent cells in the skin of young (4 mos old), middle-aged (8 mos old), and old (24 mos old) mice. Senescent cells stain blue when incubated with the substrate X-gal (pH 6.0) [6] due to increased expression of an endogenous beta-galactosidase activity [31]. SA-βgal activity (+) increased significantly in several areas of the stratum corneum (outermost layer of the epidermis, also referred as the cornified layer) as a function of age. A majority (78%) of skin sections from old mice had SA-βgal activity staining (+), while only 50% of skin sections from middle-aged mice and 17% of skin sections from young mice showed SA-βgal positivity (Figure 1A and B). 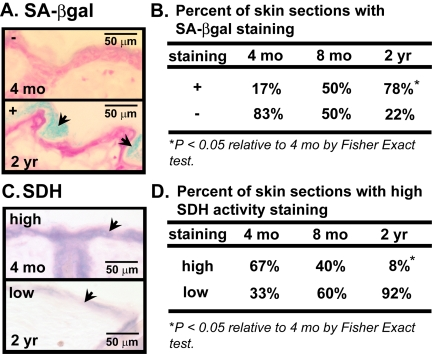 Elevated intracellular ROS is thought to both establish the senescent state and drive a positive feedback loop to maintain senescence [32, 33]. The nuclearly encoded and mitochondrially localized protein SOD2 reduces mitochondrial superoxide levels, and hence, decreases mitochondrial oxidative damage [21]. We previously showed that Sod2−/− MEFs had higher superoxide levels than WT MEFs [26]., and Sod2−/− mice had impaired mitochondrial activity in brain, heart, liver, and skeletal muscle tissues [23, 34]. To determine the relationship between mitochondrial dysfunction and cellular senescence in the skin, we used Sod2−/− mice as a model. These mice lack a functional Sod2 gene owing to a recombinational insertion that deletes exon 3 [23]. 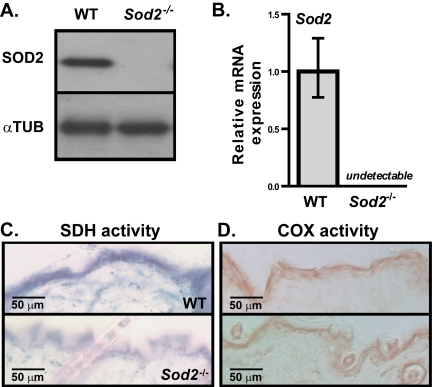 ROS can also damage DNA [35], and DNA damage response (DDR) signaling is an important initiator and sustainer of the senescent state [1, 36-43]. To determine whether Sod2 deficiency induces DNA damage in the skin, we scored cells for nuclear DNA double-strand breaks using the well-established marker phospho-rylated histone H2AX (γH2AX) [44,45]. Western analysis showed that γH2AX was essentially undetectable in skin from WT mice. By contrast, skin from Sod2−/− mice had clearly detectable γH2AX levels (Figure 3A). In addition γH2AX-positive nuclei were rare in WT, but relatively abundant in Sod2−/− epidermis and hair follicles by immunofluorescence (Figure 3B). These data suggest that Sod2 deficiency can induce DNA double-strand breaks in the skin in vivo. 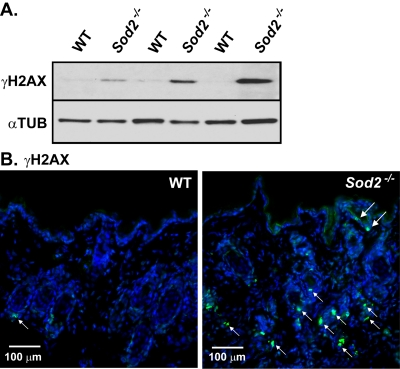 To determine whether the mitochondrial dysfunction and DNA damage in Sod2−/− skin resulted in cellular senescence, we assayed WT and Sod2−/− skin for SA-βgal activity. SA-βgal activity was detectable in several areas of the stratum corneum of all Sod2−/− mice examined (n=9), but only minimal (only in 1 of 8 animals) activity was detected in the stratum corneum of WT mice (Figure 4A). Interestingly, no SA-βgal activity staining was observed in age-matched heterozygous (Sod2+/−) mice, which appear to have a gross skin phenotype similar to WT mice (not shown). 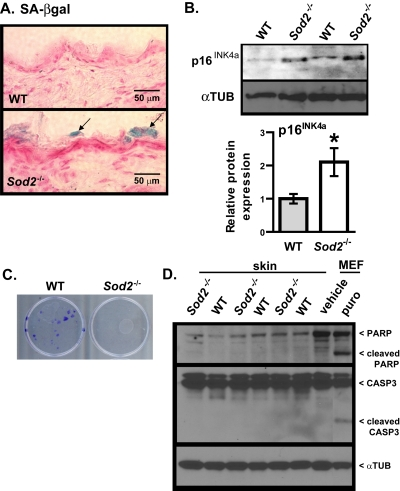 The p16INK4a tumor suppressor protein is a key mediator of cellular senescence [1, 2, 46] and also a robust biomarker of aging in mice and humans, including skin [ii,47]. We therefore measured p16INK4a expression in WT and Sod2−/− mouse skin by Western analysis. p16INK4a protein levels were two-fold higher in Sod2−/− relative to WT skin (Figure 4B).

Consistent with increased cellular senescence in Sod2−/− mouse skin, keratinocytes isolated from dorsal skin of these mice failed to form colonies in culture, in sharp contrast to keratinocytes isolated from WT mice (Figure 4C). Because apoptosis can also prevent the clonal expansion of cells, we measured the extent of poly-ADP-ribose polymerase (PARP) and caspase-3 (CASP3) cleavage, markers of apoptosis. WT and Sod2−/− skin had similar levels of full length PARP and CASP-3, with little or no evidence of cleavage (Figure 4D). As a positive control, we treated WT MEFs with the pro-apoptotic drug puromycin. This showed increased PARP and CASP3 cleavage in these but not untreated MEFs (Figure 4D). These results suggest that Sod2 deficiency in mouse skin promotes cellular senescence but not apoptosis.

To determine the effect of Sod2 deficiency on skin phenotype, we analyzed the histology of WT and Sod2−/− skin. Sod2−/− mice had a thinner epidermis (containing nucleated cells) relative to WT mice (Figure 5A and B). This thinning appeared to be due to fewer cells in the epidermis (Figure 5A), consistent with less proliferation due to senescence. Interestingly, Sod2−/− skin also had a thicker stratum corneum (Figure 5A and B). This layer is composed of terminally differentiated anucleated cells that originate from the basal layer of the epidermis [50]. 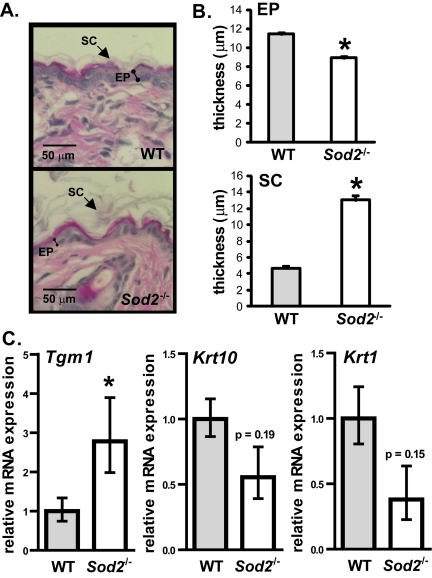 The presence of senescent cells in Sod2-deficient skin is associated with increased nuclear DNA damage, a potent inducer of senescence [1, 36-43]. This damage could result from the increase in ROS that occurs in the absence of SOD2. Alternatively, it could result from reduced DNA repair as a consequence of diminished ATP production, or a decrease in the synthesis of heme, which is needed for enzymes that participate in DNA replication and repair. In any case, our data provides evidence that mitochondrial oxidative damage can cause cellular senescence in the skin in vivo.

A recently developed mouse model of conditional Sod2 deficiency in connective tissue [54] had a reduced lifespan, accelerated aging phenotypes (e.g., weight loss, skin atrophy, kyphosis, osteoporosis, muscle degeneration) and increased cellular senescence by postnatal day 150. We found that constitutive Sod2 deficiency accelerated aging phenotypes and cellular senescence in the skin at postnatal days 19-20. The early appearance of senescent cells in the epidermis of constitutive Sod2-deficient mice, as opposed to their later appearance in connective tissues of conditional Sod2-deficient mice might be attributed to the location of epidermal cells at the interface between the body and environment. The epidermis is directly exposed to a highly pro-oxidative environment and may be especially vulnerable to oxidative stress [55]. Interestingly, human keratinocytes were more susceptible to rotenone-induced senescence than human skin fibroblasts. Keratinocytes are thought to preferentially use their mitochondria for ATP production, even at the expense of superoxide production [56]. Moreover, unlike fibroblasts, which proliferate better in 3% oxygen [27], keratinocytes proliferate better in 20% oxygen [57]. Thus, mitochondrial oxidative damage caused by Sod2 loss may be more significant in keratinocytes than fibroblasts, consistent with senescent cells localizing primarily in the epidermis of Sod2−/− mice.

Cells were seeded at 5 × 104 cells/well in six well plates and treated with vehicle (DMSO) or rotenone (Sigma-Aldrich, St. Louis, MO, USA) for 4 d. Media were refreshed every 2 d. Cells were trypsinized and counted using a Beckman Coulter counter.

Animal studies were conducted in compliance with protocols approved by our Institutional Animal Care and Use Committee. CD1 WT and Sod2−/− mice were bred as previously described [23]. Offsprings were generated from heterozygous matings. Because Sod2−/− mice die soon after birth, all mice were treated with 1mg/kg of EUK-189 per day starting at postnatal day 3, as described [25]. Skin samples from 17-20 day old postnatal mice were collected. For aging studies, C57BL/6J mice were purchased from the Jackson Laboratory. Males and females were combined according to age to increase statistical power.

Keratinocytes were isolated and cultured as described with some modification [66]. Briefly, shaved dorsal skin of 17-20 d old WT and Sod2−/− mice were dissected, washed with PBS, Hibiclens (Fisher Scientific), and calcium/magnesium-free HBSS (HBSS-cmf, Invitrogen) containing 5x penicillin-streptomycin, and floated [dermis side down] on 1 ml dispase (25 U/mL; BD Biosciences, Bedford, MA, USA) and 0.05 mg/mL of gentamicin (Invitrogen) in HBSS-cmf] at 4°C overnight. The epidermis was scraped from the dermis and incubated with TrypLE (Invitrogen) for 8 min at 37°C. TrypLE was neutralized with HBSS containing 1% chelexed-FBS (BioRad). After filtering through a 70 μm cell strainer, cells were seeded at 5 × 104 cells in 35-mm plates and cultured in keratinocyte-specific growth medium (refreshed every 2 d). After 20 days, cells were fixed in 10% buffered formalin for 20 min and stained with crystal violet (0.5% crystal violet, 20% methanol in 1x PBS). Stained cells were scanned with a hpscanjet 4700c.

OCT-embedded samples were cut into 10 μm sections. Sections were fixed in 10% buffered formalin, permeabilized with 0.5% triton-X, blocked with 4% donkey serum/1% BSA in PBS solution and incubated with anti-γH2AX (NB100-79967, Novus Biologicals, 1:500) overnight at 4°C, followed by incubi-tion with Alexa 555 donkey anti-rabbit (Invitrogen, 1:750) for 1 h at room temperature. Sections were mounted with Prolong Gold with DAPI (Invitrogen).

Cells were processed for SA-βgal staining using Senescence Detection Kit (BioVision, Mountain View, CA, USA) and bright field and phase contrast microscopy. Percent SA-βgal positivity was computed as the number of blue cells over the number of total cells. For skin, tissues were cut into 10 μm sections and processed using the same kit. Tissues were counterstained with nuclear fast red and visualized by brightfield microscopy. Four fields were taken at 40X magnification for each skin section and three sections per animal were analyzed. Skin samples with several SA-βgal staining (blue staining in at least two out of four fields) were considered as SA-βgal positive for that tissue.

Cellular senescence in human keratinocytes and skin fibroblasts treated with rotenone All measurements were done in quadruplicates.

We thank Pierre-Yves Desprez for critically reading the manuscript, Marco Demaria for providing normal primary MEFs, and Hannah Tierney for help in organizing figures. This work was funded by research (P01-AG025901) and training (T32-AG000266) grants from the National Institutes of Health, National Institute on Aging. The authors declare no competing interests.