The giant panda (Ailuropoda melanoleuca), an endangered species endemic to western China, has long been threatened with extinction that is exacerbated by highly contagious and fatal diseases. Aging is the most well-defined risk factor for diseases and is associated with a decline in immune function leading to increased susceptibility to infection and reduced response to vaccination. Therefore, this study aimed to determine which genes and pathways show differential expression with age in blood tissues. We obtained 210 differentially expressed genes by RNA-seq, including 146 up-regulated and 64 down-regulated genes in old pandas (18-21yrs) compared to young pandas (2-6yrs). We identified ISG15, STAT1, IRF7 and DDX58 as the hub genes in the protein-protein interaction network. All of these genes were up-regulated with age and played important roles in response to pathogen invasion. Functional enrichment analysis indicated that up-regulated genes were mainly involved in innate immune response, while the down-regulated genes were mainly related to B cell activation. These may suggest that the innate immunity is relatively well preserved to compensate for the decline in the adaptive immune function. In conclusion, our findings will provide a foundation for future studies on the molecular mechanisms underlying immune changes associated with ageing.

The giant panda (Ailuropoda melanoleuca), an endangered species endemic to western China, has long been threatened with extinction due to human population expansion and habitat destruction [1, 2]. Recent research has shown that giant pandas are well adapted to a specialized bamboo diet via enigmatic gut microbiota and low energy expenditure [3–5]. Contrary to previous studies, the latest genome sequencing and resequencing and genome-wide genetic studies have demonstrated that the giant panda has a relatively high genetic diversity [6–8]. Over the years, extensive research has been conducted on genes of the major histocompatibility complex (MHC) in giant pandas and shown that DRB and DQA genes have low diversity but remain positive selection [9–11]. However, most of these studies focused on the adaptations and genetic diversity of giant pandas and little is known about the gene expression of immune-related genes. Giant pandas are vulnerable to a variety of carnivore-specific and mammalian infectious and parasitic diseases that seriously threaten the giant panda populations [12–16]. For example, Baylisascaris schroederi is the most common parasite in wild and captive giant pandas and was responsible for half of panda deaths between 2001 and 2005 [15]. Likewise, canine distemper virus (CDV) is highly contagious and fatal and affects a wide range of mammals, including the giant panda [17]. In 2014–2015, an outbreak of CDV infection in giant pandas caused the death of five infected animals in two months [18]. The immune system is vulnerable to age-associated alterations, which accumulate to produce a progressive deterioration and lead to an increased incidence of infectious diseases [19]. Although aging is an inevitable biological process and a powerful risk factor for many diseases, the underlying molecular mechanisms that lead to generalized disease susceptibility are largely unknown [20, 21]. Aging has proven difficult to dissect in part due to its interactions with environmental influences, other genetic factors, and a large number of age-related diseases [22]. Immunosenescence, defined as immune changes with ageing, is an unavoidable life process and has been characterized in several species, such as humans [21, 23], mice [24], zebra finches [25] and wolves [26]. A comprehensive meta-analysis of age-related gene expression profiles indicated that signatures of aging most notably involve an overexpression of inflammation and immune response genes and an underexpression of genes associated with energy metabolism [27]. However, the effects of aging on giant panda have not been characterized, especially the age-related changes of immune system. Moreover, understanding the principles of giant panda immune system is vital for the development vaccines that can elicit protective immunity [28]. The aims of this study were to determine which genes and pathways show differential expression with age in giant panda blood tissues and to understand age-related alterations of the immune system. We used RNA-seq technology to identify age-related differentially expressed genes (DEGs) in giant panda blood samples and performed functional enrichment analysis for these DEGs. The collective data generated in this study may represent a valuable resource to enable further advancements in immunological research in giant pandas.

RNA prepared from blood tissues of four giant pandas were subjected to RNA sequencing using Illumina HiSeq™ 2000. Together with the three giant panda transcriptomes from our previous study, we totally acquired approximately 187 million raw paired-end reads and 162 million remained after removing adaptor sequences and discarding low quality reads. The total length of the reads was about 35.8 gigabases (Gb). We aligned each of the seven short-read libraries onto the giant panda Ensembl reference genome (ailMel1) separately and found that an average of 19.86 million high-quality reads (85.68%) could be successfully mapped to the genome per sample. This included a mean of 19.31 million uniquely mapped reads (97.23%) per sample, indicating that the majority of the paired reads aligned correctly (Table 1). These high-quality reads were assembled into 56,543 genes, giving rise to 88,071 transcripts containing 46,091 (52.33%) transcripts that had more than one exon (Supplementary Figure 1). The comparison of similarities between the assembled transcripts and the Ensembl transcripts showed that only 2943 (3.34%) matched exactly with annotated intron chain and a total of 33,600 (38.15%) were identified as potentially novel isoforms of a predicted Ensembl transcript with at least one splice junction shared. The majority of transcripts (34,660, 39.35%) were annotated as intergenic transcripts and a small proportion of transcripts (7824, 8.88%) entirely fell into reference intron (Supplementary Table 1).

Table 1. Summary of sequencing and assembly of transcriptome

The samples were categorized by giant panda age into a young group (i.e. 2, 5, 6 years) and an old group (i.e. 18, 19, 21 years) according to an earlier study [29]. The giant panda aged 12 years (i.e. a middle-aged adult) was not used to identify DEGs due to a lack of biological replicates. In total, 210 genes were found to show significant differential expression in giant panda blood samples between the young group and old group, after adjusting for confounding factors such as sex and library (Figure 1A, Supplementary Table 2). Among those DEGs, 146 genes were up-regulated while 64 genes were down-regulated in the old group compared to young group, and the annotated up- and down-regulated genes were 113 and 49, respectively (Figure 1B). In addition, we conducted a hierarchical clustering of DEGs across six samples. Genes that were up-regulated clustered into one group and the genes that were down-regulated clustered into another group. Similarly, young samples were clustered into one group and old samples were clustered into another group (Figure 1C), which also highlights the expression level of DEGs in the old group compared to the young group. To determine the relationship of these DEGs with age, we compared all the detected DEGs to age-related genes in purified human immune cells, human peripheral blood and wolf leukocytes. We found that 23 DEGs were presented in human studies [21] and only one DEG was presented in wolf study [26]. The 20 most significantly up- and down-regulated genes are shown in Tables 2 and 3. We also found that 2 MHC class I genes (LOC105855951, LOC102746195) and 3 MHC class II genes (LOC100464025, LOC101370503, LOC100464780) were both up-regulated in the old group. 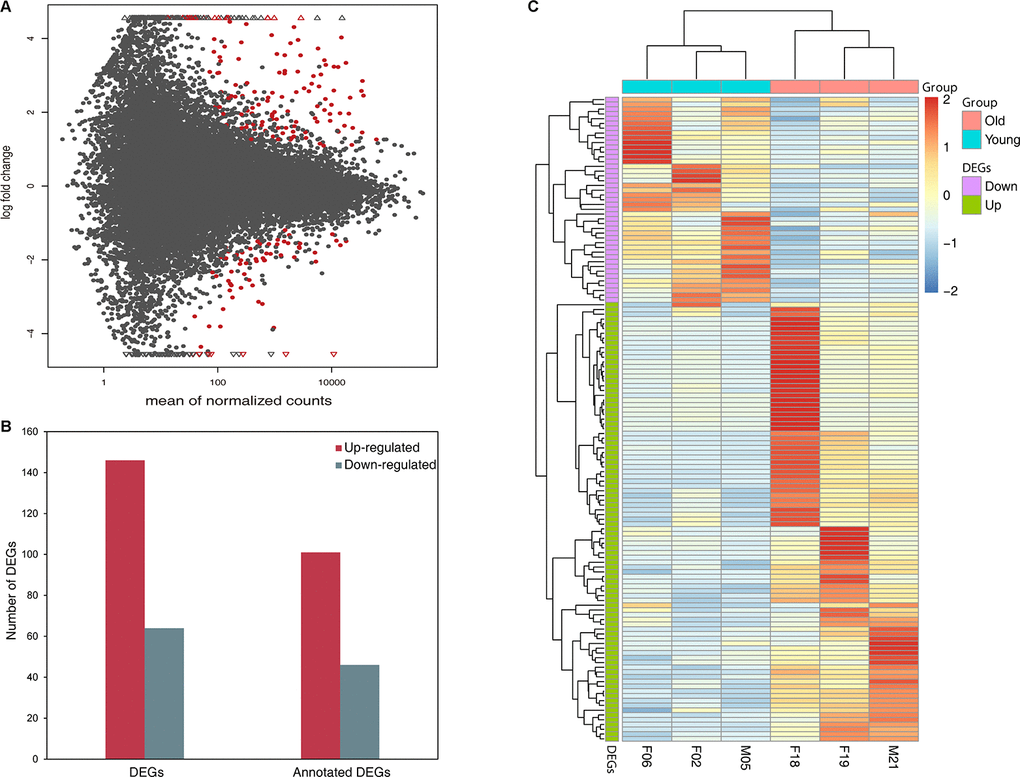 Figure 1. Differentially expressed genes in old group compared to young group. (A) MA plot showing the distribution of gene expression plotted against log2 fold change for each gene. Red dots indicate differentially expressed genes (FDR ≤ 0.05), black dots indicate non-differentially expressed genes. (B) Number of up- and down-regulated DEGs and annotated DEGs. (C) Heat map plot of DEGs using TPM expression value of genes by adopting hierarchical clustering method. The expression values of six individual are presented after being centered and scaled in the row direction. Each column represents a specimen and each row represents a gene. Red color indicates genes that were up-regulated and blue color indicates genes that were down-regulated.

Table 2. The top 20 most significantly up-regulated DEGs with annotation in old group compared with young group

Table 3. The top 20 most significantly down-regulated DEGs with annotation in old group compared with young group

To gain insights into the biological roles of the DEGs, we performed a GO categories enrichment analysis. Only the annotated DEGs were selected and tested against the background set of all genes with GO annotation. We examined the GO categories separately. We found that for up-regulated genes with age, almost all the significantly enriched GO terms in biological process category were associated with the immune system, such as, immune response (GO:0006955), negative regulation of viral genome replication (GO:0045071), and defense response to virus (GO:0051607). MHC class II protein complex (GO:0042613) and GTP binding (GO:0005525) were the most significantly enriched GO term in the cellular component and molecular function categories, respectively (Figure 2, Supplementary Table 3). For down-regulated genes with age, the most significantly enriched biological process GO terms were complement activation, classical pathway (GO:0006958), B cell receptor signaling pathway (GO:0050853) and Fc-epsilon receptor signaling pathway (GO:0038095) (Figure 3, Supplementary Table 4). Interestingly, several up-regulated genes were enriched in retina homeostasis (GO:0001895) and regulation of blood pressure (GO:0008217), which might be related to age. 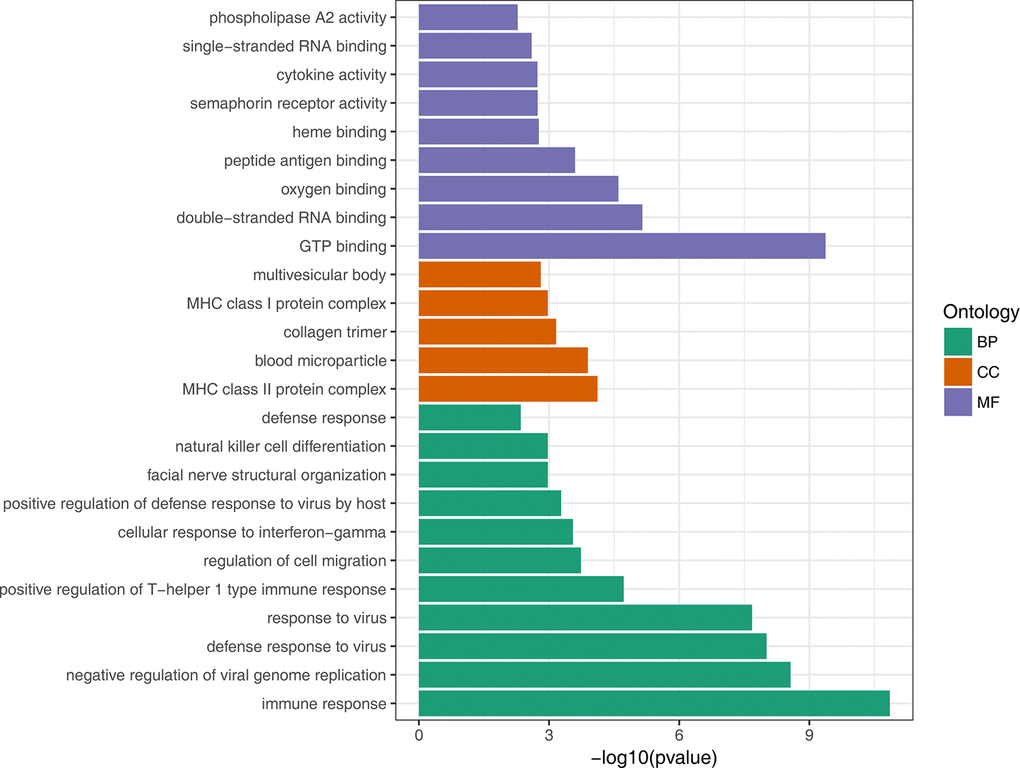 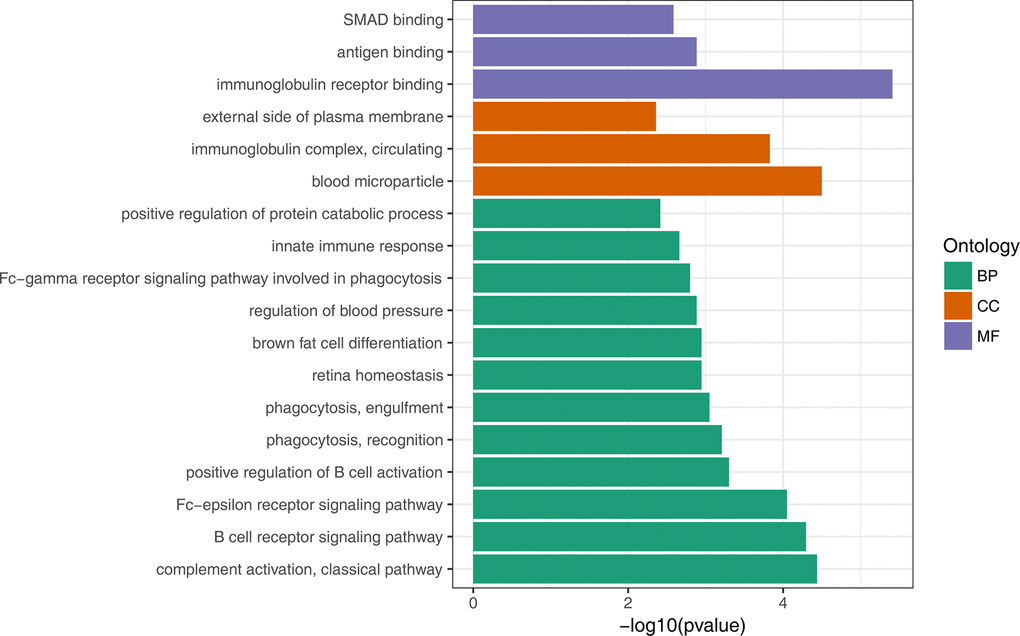 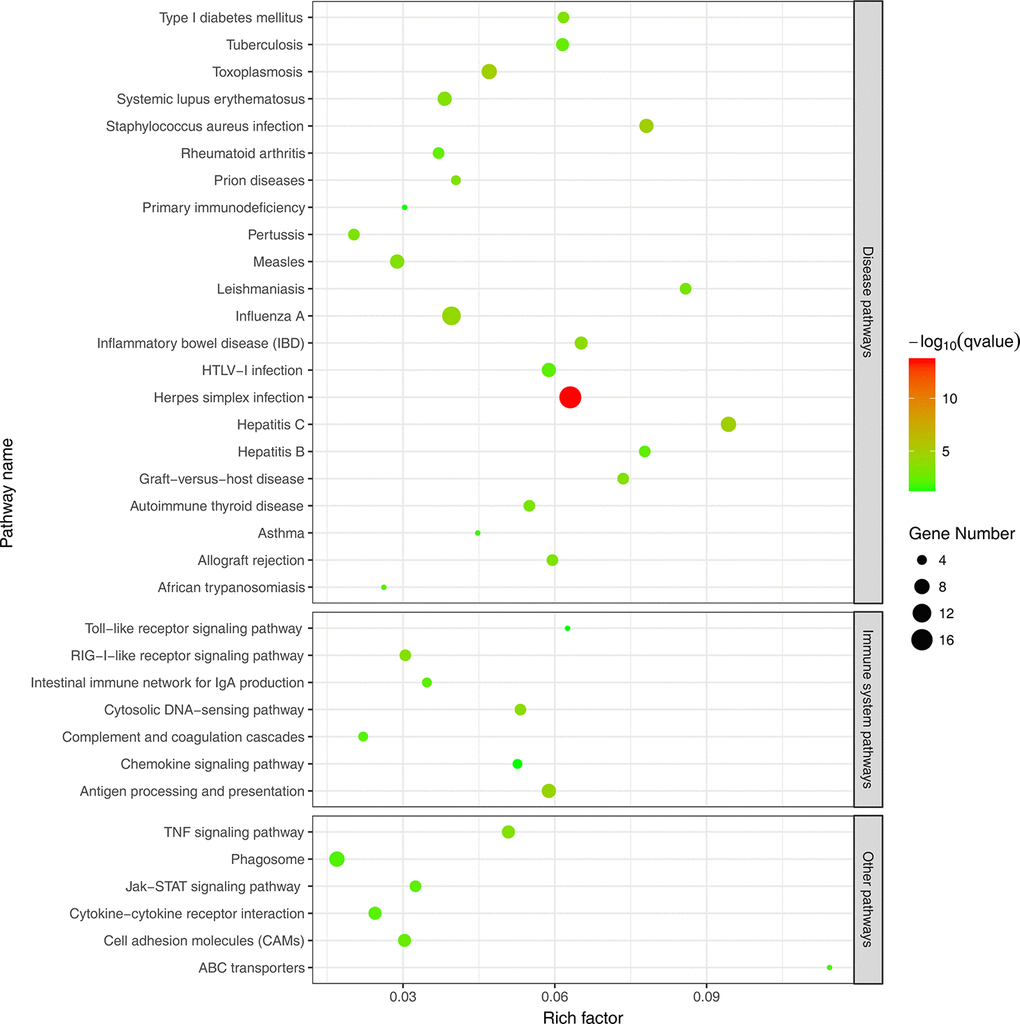 We have performed a protein-protein interaction analysis of all DEGs. A total of 122 interactions between 36 DEGs were extracted from the STRING database. Interferon-stimulated gene 15 (ISG15), signal transducer and activator of transcription 1 (STAT1), interferon regulatory factor 7 (IRF7) and DExD/H-Box Helicase 58 (DDX58) that play important roles in response to pathogen invasion were at key position of the interaction network (Figure 5). 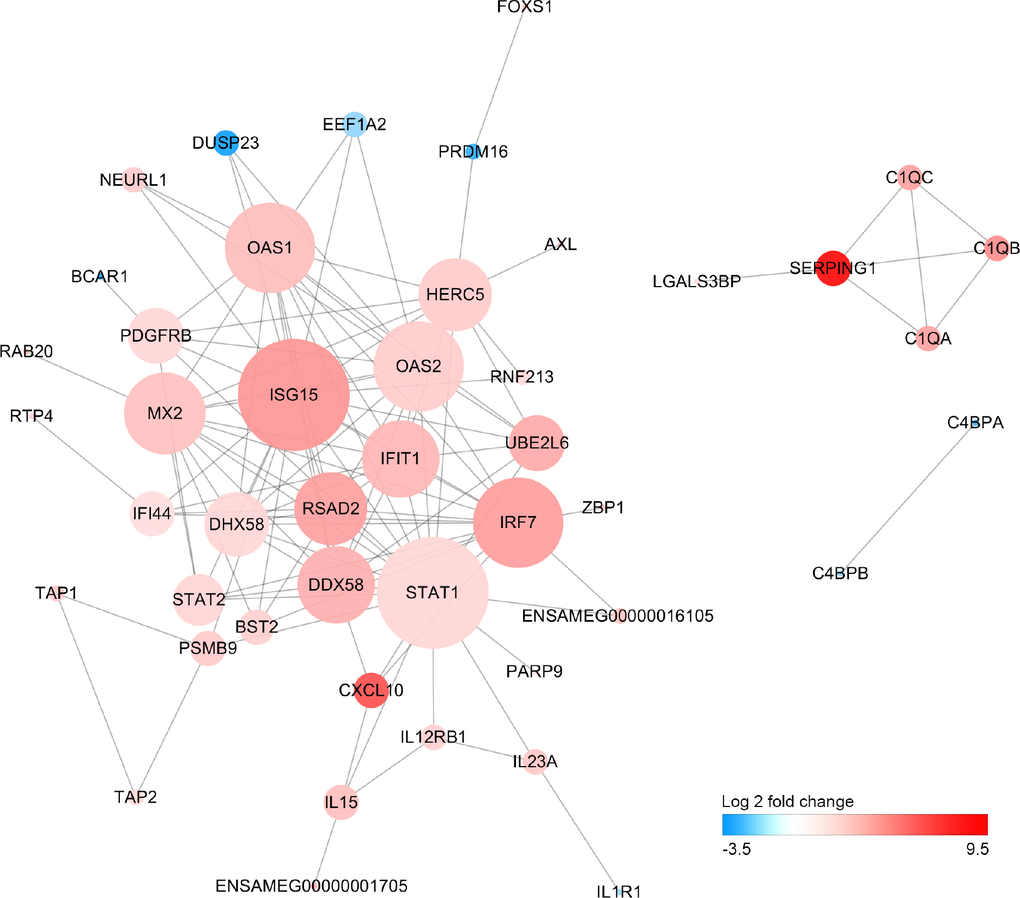 Figure 5. Protein-protein interaction network of differentially expressed genes. Size of the node is proportional to the number of DEGs interacted with it, and color of node represents Log2FoldChange in expression levels of DEGs between old and young giant pandas.

Blood samples were collected during a routine examination from four captive giant pandas at the Chengdu Research Base of Giant Panda Breeding in Chengdu, China. The other three giant panda blood transcriptomes were obtained from our previous study in NCBI SRA (project Accession no. SRP041998). Samples collection and utility protocols were approved by the Chengdu Institute of Biology Animal Use Ethics, which is responsible for the Chengdu Research Base of Giant Panda Breeding. The fresh blood samples were immediately stored in RNAlater (Ambion Inc., Austin, TX, USA). Total RNA was extracted using TRIzol reagent (Invitrogen, Carlsbad, CA, USA) following the manufacturer’s protocol and treated with RNase-free DNase I.

The merged assemblies were compared using the Cufflinks [62] inclusive utility Cuffcompare with the Ensembl annotations to find known and novel genes and isoforms, as well as transcripts expressed from intergenic regions. Only the genes with “=” and “j” class code were considered to be known genes. The GO annotations of these genes were extracted from Ensembl BioMart (http://www.ensembl.org/biomart/martview). The unknown gene sequences were searched against Swiss-Prot and NCBI non-redundant (NR) database using BLASTX [63] with a typical cutoff E-value of 1E-5. Gene ontology (GO) was applied with the Blast2GO [64] to obtain annotation of unknown genes.

We used the merged GTF file as the reference annotation file to guide the assembly process. StringTie was performed to estimate the genes expression level with -G, -b and -e options. The expression value of TPM (transcripts per million) and raw read counts for each gene were extracted from above result. Differential expression analysis was performed using DESeq2 [65] that takes the raw read count as the input. The results of all statistical tests were corrected for multiple testing with the Benjamini-Hochberg false discovery rate (FDR ≤ 0.05) and an absolute value of log 2 fold change ≥ 1 was used to determine significant differences in gene expression.

We thank the Chengdu Research Base of Giant Panda Breeding for their help in collecting the samples for this study. We also appreciate Dr. Megan Price for critical reading and English editing on the manuscript.

The authors disclose no potential conflicts of interest.

This work was supported by the National Natural Science Foundation of China (31570534) and Chengdu Panda Breeding Research Foundation (CPF2017-22).