Copyright: © 2020 Feng et al. This is an open access article distributed under the terms of the Creative Commons Attribution License (CC BY 3.0), which permits unrestricted use, distribution, and reproduction in any medium, provided the original author and source are credited.

Gastric cancer (GC) is a common cancer, causing significant human mortalities each year [1]. In the past decades, due to the developments of sanitation, control of Helicobacter pylori infection and GC screenings, its incidence is declined [2, 3]. However, the prognosis for the metastatic, recurrent, and other advanced GCs is not optimistic [1]. Identification of novel therapeutic targets and biomarkers for GC is extremely important [4, 5]. It is the research focus of our group [6, 7].

Long non-coding RNAs (LncRNAs) are a large family of conserved non-coding RNAs (ncRNAs) with over 200-nucleotide long [12–14]. LncRNA can decrease target miRNA expression by acting as their sponges [15]. LncRNAs regulate key cellular activities, including genomic imprinting, cell proliferation and survival, cell cycle control and differentiation as well as apoptosis and transformation [12–14]. Accumulative studies have confirmed that dysregulation of LncRNA plays a pivotal role in the progression of GC [15, 16] and other human cancers [17, 18]. One aim of this study is to identify possible miR-9-targeting LncRNA, regulating LMX1A expression and GC cell functions.

LncRNAKCNQ1OT1, or potassium voltage-gated channel subfamily Q member 1 (Kcnq1) overlapping transcript 1, is an imprinted antisense LncRNA [19, 20]. It is an overlapping transcript of Kcnq1, locating at Kcnq1 loci on chromosome 11p15.5, being exclusively transcribed from the paternal chromosome [19, 20]. Recent studies have shown that KCNQ1OT1 dysregulation participates in carcinogenesis and progression of human cancers [21, 22]. Its expression and potential functions in GC are largely unknown. In the present study, we will show that LncRNAKCNQ1OT1 inhibits GC cell progression possibly via regulating miR-9 and LMX1A expression.

It is possible that miR-9 upregulation in GC (see our previous study [7]) could be due to downregulation of certain LncRNAs. As they could function as the ceRNAs of miR-9. To explore this possibility, the human LncRNA database, LncBase (Predicted v.2), was consulted to identify possible miR-9-targeting LncRNAs. These potential LncRNAs were further verified by other LncRNAs/miR databases, including StarBase and miRbase. The bioinformatic analyses identified that one LncRNA, KCNQ1OT1, putatively targeted miR-9. Its expression in GC tissues was tested next. Total RNA was extracted from fresh GC tissues and the adjacent normal epithelial tissues from twelve (12) primary GC patients [7]. KCNQ1OT1 was determined by qPCR assay, using the previously-described primers [23]. 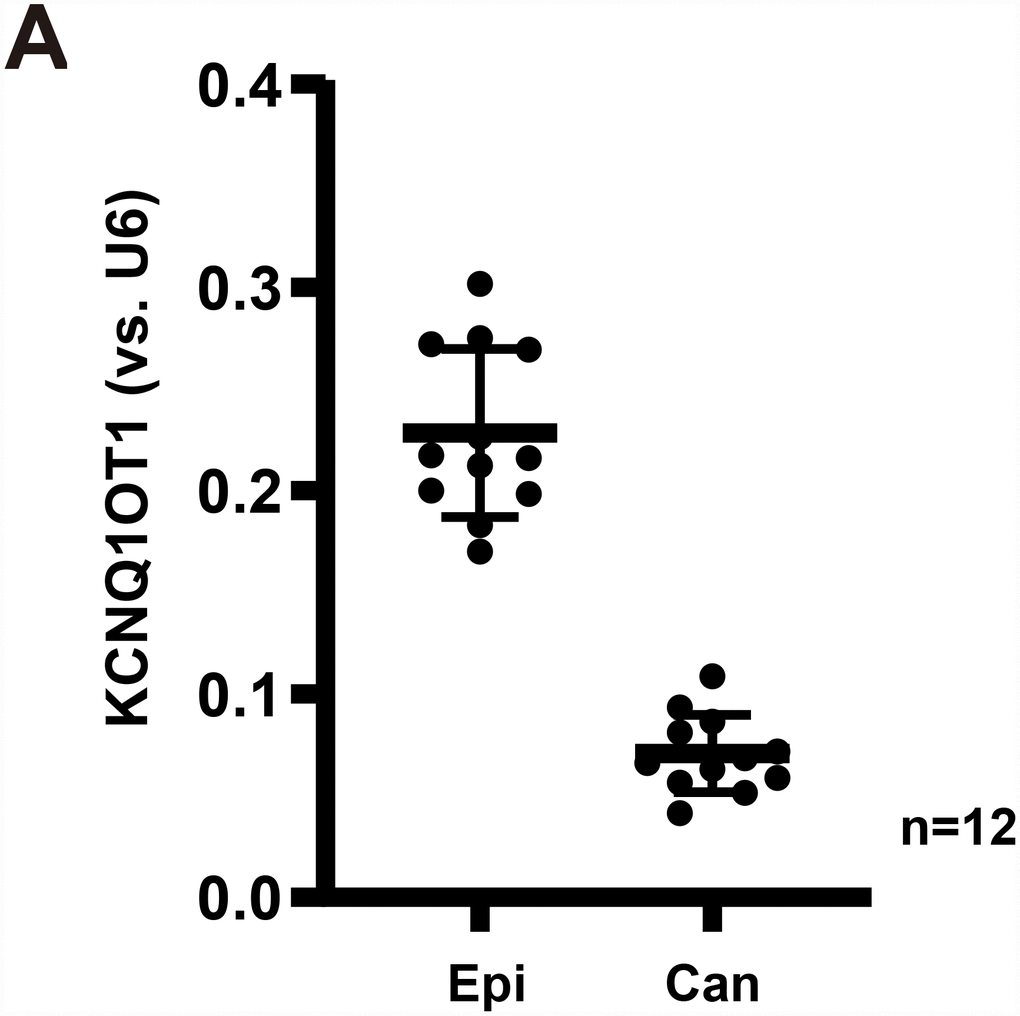 Figure 1. LncRNAKCNQ1OT1 is downregulated in human GC tissues. Expression of LncRNAKCNQ1OT1 (A) in twelve (12) different human gastric cancer (GC) tissues (“Can”) and matched surrounding normal epithelial tissues (“Epi”) was shown, results were normalized to U6 RNA. All values were expressed as the mean ± standard deviation (Same for all Figures). *P <0.05 vs. “Epi” tissues. 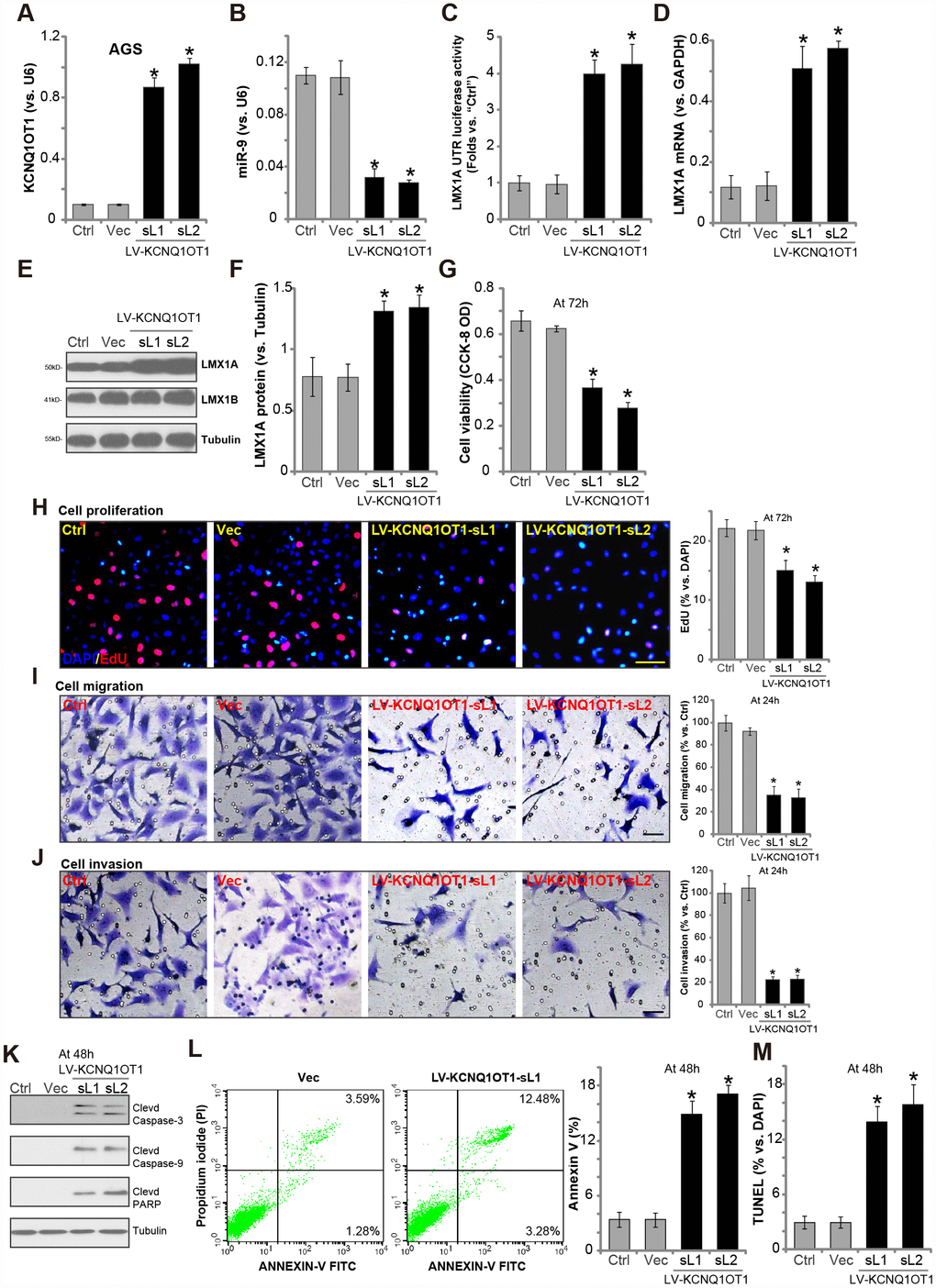 LMX1A regulates a number of physiological and pathological processes [8]. It is considered as a tumor suppressor [8, 9, 11]. LMX1A downregulation is detected in GC and many other cancers [9, 10]. Our previous study has shown that LMX1A overexpression can inhibit AGS cell progression in vitro. We therefore analyzed the functional consequences of KCNQ1OT1 overexpression. 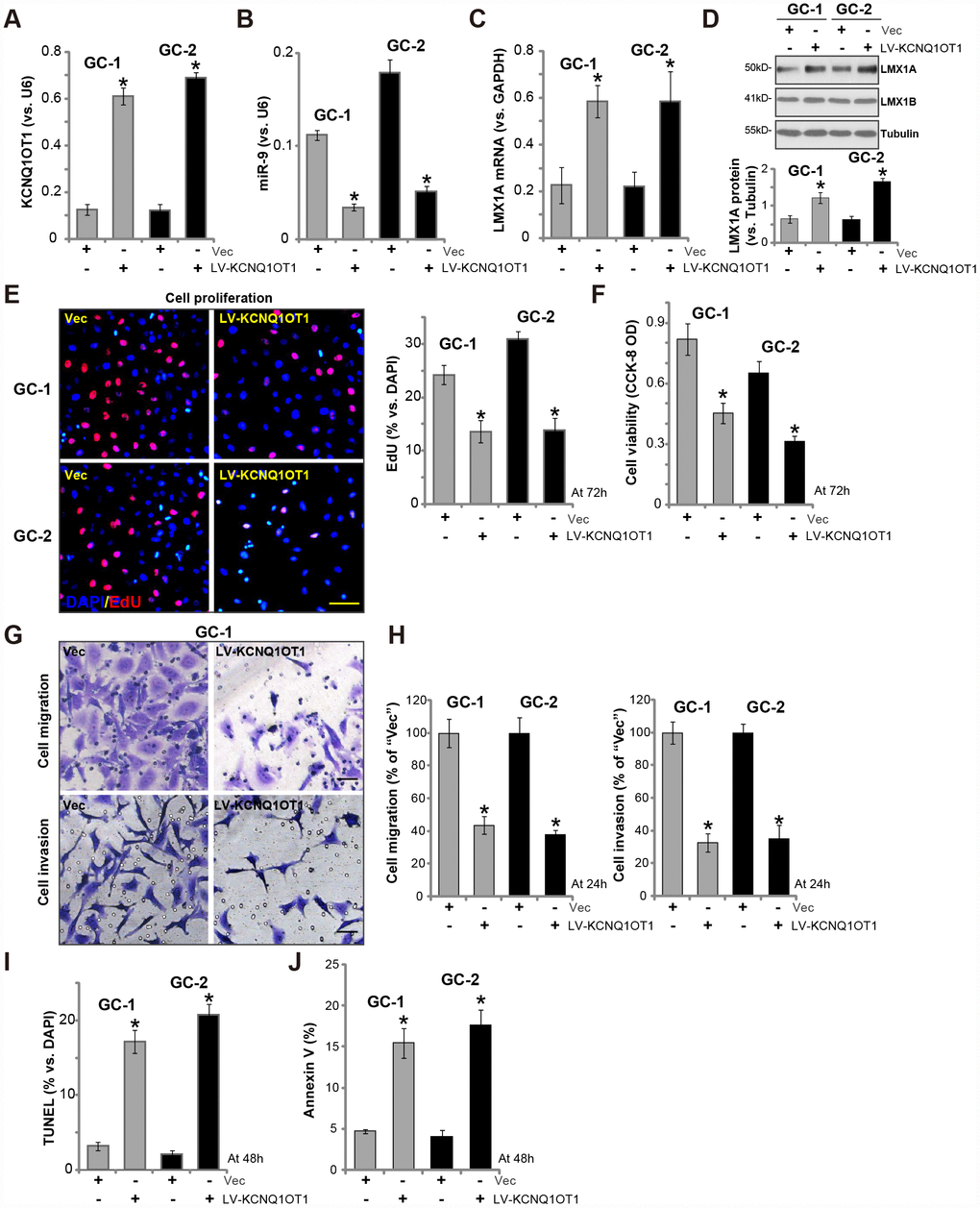 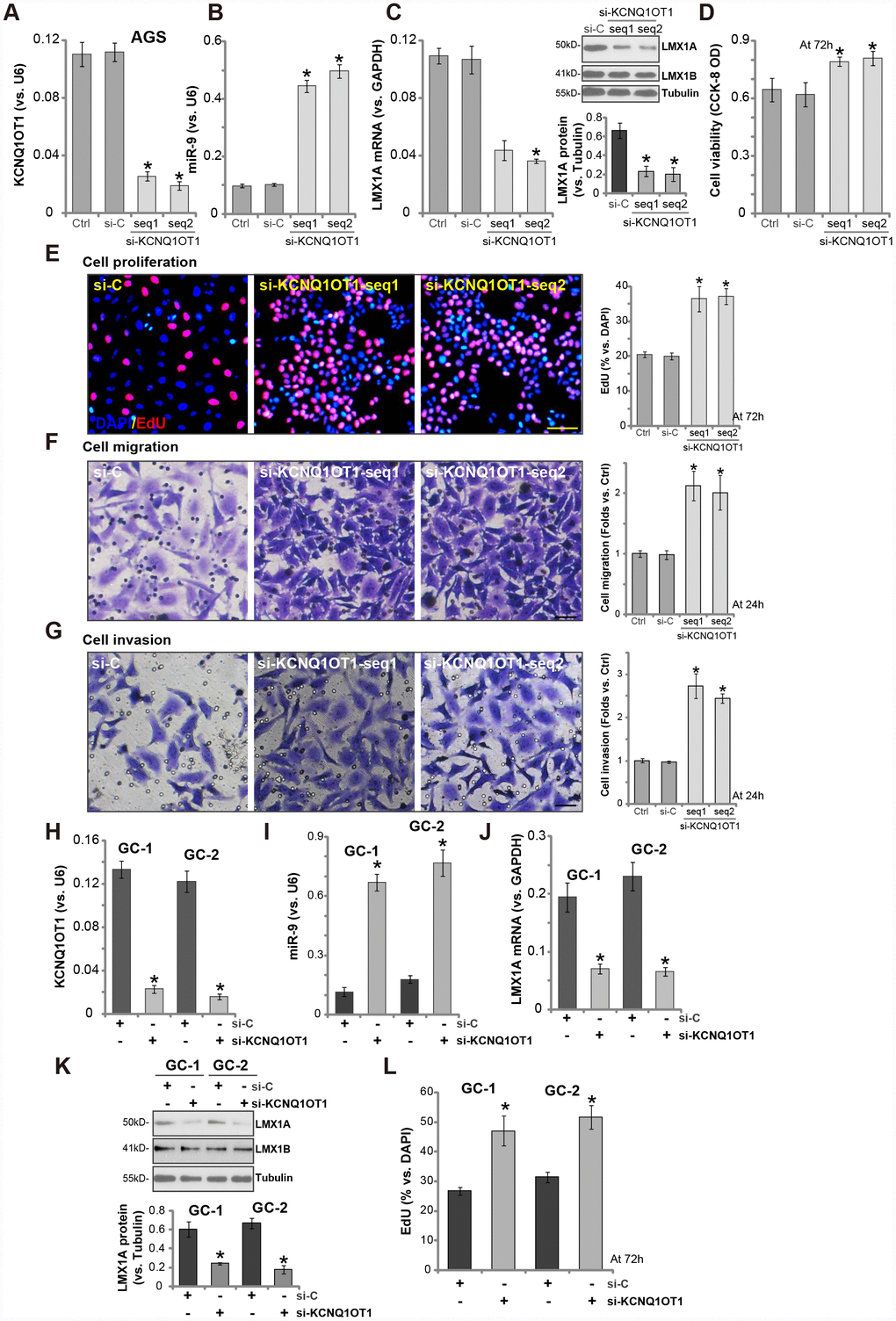 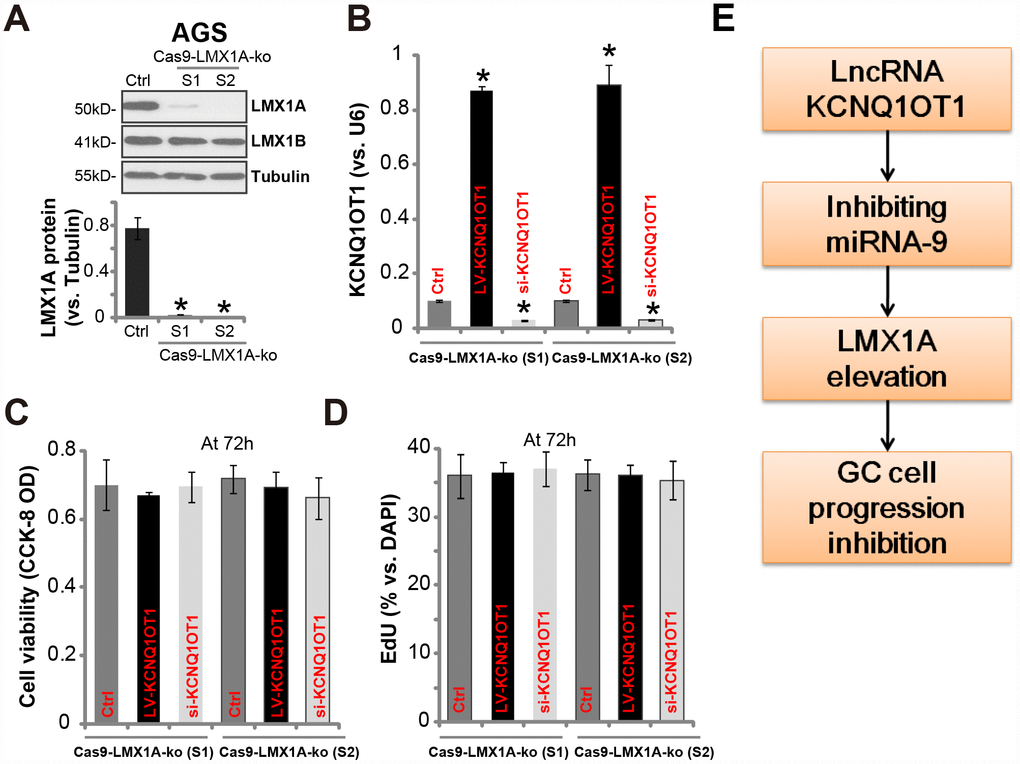 Studies have proposed a possible role of KCNQ1OT1 in carcinogenesis and progression of multiple cancers [21–23]. Recently, a high level of KCNQ1OT1 was detected in lung cancer, promoting proliferation and invasion as well as chemoresistance of lung cancer cells [23, 25]. Similarly, KCNQ1OT1 upregulation and mutation are associated with progression of hepatocellular carcinoma (HCC) and glioma [26, 27]. Feng et al., reported that KCNQ1OT1 upregulation in breast cancer is important for cancer cell growth in vitro and in vivo [21]. Li et al., however demonstrated that KCNQ1OT1 downregulation attenuated myocardial ischemia/reperfusion injury from acute myocardial infarction, possibly by regulating adiponectin receptor 1 (AdipoR1)-p38 /NF-κB signaling cascade [28]. Here, we show that KCNQ1OT1 expression is downregulated in human GC tissues, which correlated with miR-9 upregulation.

AGS cells were cultured as previously described [7]. The primary human GC cells, derived from two independent written informed-consent GC patients (“GC-1” and “GC-2”), were cultured in the described medium [31]. The protocols were approved by the Ethics Board of Minhang Hospital, Fudan University (Ethics number: 2015-052, Principle Investigator, Dr. Feng Li), in according to Declaration of Helsinki.

As described previously [7], fresh GC cancer tissues along with matched surrounding normal gastric epithelial tissues from twelve (12) primary informed-consent GC patients (all male, 41–67 years old, with no prior chemotherapy and radiotherapy) were acquired. Tissues were washed, minced, and homogenized before further analysis.

For each treatment, aliquots of 100 ng total RNAs were reverse transcribed into cDNA with Reverse Transcriptase M-MLV (Promega, Madison, WI). The quantitative reverse transcriptase PCR (qPCR) assay was performed by the previously-described protocol [7], using ΔΔCt method for target mRNA quantification and GAPDH as the internal control. KCNQ1OT1 and miR-9 expression was normalized to U6 RNA. Primers for miR-9, LMX1A, GAPDH and U6 were reported previously [7]. The primers for KCNQ1OT1, forward, 5′-CTTTGCAGCAACCTCCTTGT; reverse, 5′-TGGGGTGAGGGATCTGAA, were also reported early [32].

The PCR primer sets, 5′-GGGGTACCCCAGGTGACAAGGTGCAGGCGC and reverse primer: 5′-ACAGAGTTCCTCGTTGGGAGCTTGAAGATCTTC [32], were applied to amplify the upstream KCNQ1OT1 promoter region from GC cells, inserted into the hU6-MCS-Ubiquitin-EGFP-IRES-puromycin vector (GV248, Genechem). The construct, along with the lentiviral packaging constructs [7], were transfected to HEK-293 cells to generate KCNQ1OT1 expression lentivirus (“LV-KCNQ1OT1”). The lentivirus was filtered, enriched and added to GC cells. When necessary, stable cells were selected by puromycin (5.0 μg/mL) for a total of 4-5 passages. Control cells were infected with control lentivirus with empty vector.

GC cells were seeded at 50% confluence. Two different siRNAs (designed and verified by RIBOBIO, Guangzhou, China [24]) against non-overlapping sequence of KCNQ1OT1 were individually transfected (siRNA concentration at 500 nM) by Lipofectamine 2000 reagent for 24h, repeated for a second round for another 24h (total 48h). KCNQ1OT1 knockdown was confirmed by qPCR assay. Control cells were transfected with the scramble non-sense control siRNA (“si-C”).

As reported [7], the human LMX1A 3’-UTR with the putative binding sites of miR-9 (see the sites at [7]) was amplified by PCR and then inserted into the firefly luciferase reporter vector, pGL4.13 (luc2/SV40) (Promega), at the XbaI site and downstream from the stop codon of the luciferase gene. AGS cells were plated at 1 × 105 cells per well into six-well plates (60% confluence), transfected with pGL4.13 construct along with the Renilla luciferase reporter vector and pRL-SV40 (Promega). Following the indicated genetic treatments, LMX1A 3’-UTR luciferase activity value was tested, and results were normalized to that in the control cells.

As described [33], GC cells were seeded on “Transwell” upper chamber (at 3 × 4000 cells per chamber, BD Biosciences). The complete medium (with 10% FBS) was added to the lower compartments. After 24h the migrated cells on the lower surface were stained. Matrigel (Sigma) was added in the chamber surface when analyzing cell invasion. Five repeated views in each condition were included to calculate the average number of migrated/invasive cells.

EdU (5-ethynyl-20-deoxyuridine) Apollo-567 Kit (RIBOBIO, Shanghai, China) was employed to test cell proliferation. Briefly, cells were seeded onto the twelve-well plates. Following treatment, EdU and DAPI dyes were added, and cells were incubated for additional 8h. Cell nuclei were then visualized under a fluorescent microscope. For each condition at least 500 cells in five random views were included to calculate EdU ratio (EdU/DAPI×100%).

Testing cell apoptosis, by the Annexin V FACS and TUNEL staining assay, was described in detail in our previous study [7].

Total cellular lysates were resolved by SDS-PAGE (10%) gels, transferred to a PVDF membrane. The latter was incubated with blocking buffer and following primary and secondary antibodies. ECL method was applied to detect the immuno-reactive bands.

The GraphPad Prism software was employed for statistical analyses. All values were expressed as the mean ± standard deviation (SD). Repeated-measures analysis of variance (RMANOVA) followed by Dunnett’s post hoc test for multiple comparisons were applied to evaluate statistical significance. All differences were considered significant at P < 0.05. To determine significance between two treatment groups, the two-tailed t tests were carried out.

All listed authors designed the study, performed the experiments and the statistical analysis, and wrote the manuscript. All authors have read the manuscript and approved the final version.

The authors declare that they have no conflicts of interests.

This project was supported by Minhang District University Building Project (2017MWDXK03). The funders had no role in the study design, data collection and analysis, decision to publish, or preparation of the manuscript.