Copyright © 2020 Liu et al. This is an open-access article distributed under the terms of the Creative Commons Attribution License (CC BY 3.0), which permits unrestricted use, distribution, and reproduction in any medium, provided the original author and source are credited.

Previous Mendelian randomization (MR) studies have yielded a conflicting causal relationship between sarcopenia and coronary artery disease (CAD), and lack the association of CAD with sarcopenia. We performed a bi-directional MR approach to clarify the causality and causal direction between sarcopenia-related traits and CAD. In stage 1 analysis, estimates of inverse variance weighting (IVW) and several sensitivity analyses were obtained by applying genetic variants that predict sarcopenia-related traits to CAD. Conversely, we also applied genetic variants that predict CAD to sarcopenia-related traits in stage 2 analyses. IVW analysis showed that higher handgrip strength reduces risk for CAD: A 1-kilogram (kg) increase in genetically determined left handgrip strength reduced odds of CAD by 36% [odds ratio (OR) = 0.64, 95% confidence interval (CI) 0.498 - 0.821, p = 4.56E-04], and right handgrip strength reduced odds of CAD by 41.1% (OR = 0.599, 95% CI 0.476 - 0.753, p = 1.10E-05). However, genetically predicted CAD did not show any causal association with handgrip strength, and no significant causal relationship was detected between genetically instrumented body lean mass and CAD. Our results suggest that decreased muscle strength but not decreased muscle mass leads to the increased risk of CAD in sarcopenia.

Sarcopenia is a common clinical condition characterized by reduced muscle mass and muscle strength with aging [1]. Morbidity and mortality from cardiovascular disease (CVD) are increasing worldwide due to aging [2]. Coronary artery disease (CAD) is the most common form of CVD and a major global health problem that imposes a great economic burden [2]. A series of observational studies have examined the association between sarcopenia and CVD; however, no consensus has been reached [3–6]. A recent meta-analysis study illustrated that handgrip strength was an independent predictor of CVD in community-dwelling populations [3], but this association disappeared after adjusting for baseline CVD risk factors in another prospective cohort study [4]. Furthermore, reverse association between muscle mass and CAD has also been observed in traditional studies [5, 6]. A possible mechanism underlying these contradictory results might be the association between both CAD and sarcopenia with high body fat mass [7, 8] and other unmeasured potential confounders. Less muscle mass reduces total energy expenditure, which might lead to higher fat mass and a subsequent increase in risk of CAD. On the other hand, accumulated body fat mass induces chronic inflammation, which further contributes to the development and progression of sarcopenia and CAD [7–9].

Mendelian randomization (MR) analysis has been widely performed to investigate the potential causality between genetically predicted environmental factors and diseases independent of the factors that might confound observational studies [10–12]. MR studies have also yielded a conflicting causal relationship between sarcopenia-related traits (handgrip strength) and CVD [13–16]. A two-sample MR (TSMR) study reported that increased handgrip strength was causally related to lower risk of CAD [13], and similar results were also obtained between handgrip strength and CVD in UK individuals with one-sample MR analysis [15, 16]. However, another TSMR analysis did not find causal evidence between handgrip strength and CAD [14]. To our knowledge, no MR analysis has been conducted between muscle mass and CAD, nor was the MR study focused on the association of CAD on sarcopenia. Therefore, we performed a bi-directional MR approach to clarify the causality and causal direction between sarcopenia-related traits (muscle mass and muscle strength) and CAD.

After removing the proxy IVs and the potential pleiotropic IVs, both left and right handgrip strength were still negatively associated with CAD (Tables 1–3, Supplementary Table 1). However, our standard IVW and sensitivity analysis did not detect a significant association between genetically determined body lean mass and CAD (Tables 1–3).

In total, we obtained 39 LD-independent (r2 < 0.001) IVs that achieved genome-wide significance level (p < 5×10−8) from CAD (Supplementary Table 2). F statistics are presented to demonstrate the strength of the relationship between IVs and sarcopenia-related traits. The F statistics for selected IVs of CAD was larger than 10 (F = 64.17), and variance explained by these IVs is shown in Supplementary Table 3. Further, the negative control analysis results showed that CAD was not related to myopia, indicating the selected IVs of exposure were appropriate (Supplementary Tables 4–6).

As the heterogeneity test showed significant heterogeneity among the selected IVs (p < 0.05, Table 1), IVW in random-effects model was used. We did not detect a relationship between the genetically instrumented CAD and sarcopenia-related traits (body lean mass, left handgrip strength and right handgrip strength) in either IVW analysis or sensitivity analysis, even after removing the proxy IVs (Tables 1–3).

In the current study, by applying bi-directional MR analysis, we successfully confirmed that increased handgrip strength was associated with decreased risk of CAD. However, no significant causal effect of CAD on handgrip strength was observed. Additionally, no significant causal relationship was detected between genetically determined body lean mass and CAD. To our knowledge, this is the first bi-directional MR study conducted on the topic of sarcopenia and CAD, simultaneously considering both muscle mass and muscle strength and the potential causality and reverse causality between sarcopenia and CAD.

The causal relationship of muscle strength with CAD has been discussed in previous TSMR studies [13, 14]. Xu and Hao’s TSMR analysis applied two genetic variants that predict handgrip strength in a European population to CAD in a mixed population of various ethnicities, indicating that increased handgrip reduced the risk of CAD [13]. However, another MR analysis did not find evidence for causality in the associations between handgrip strength (European population) and CAD (mixed population). A total of 20 genetic variants were selected to predict handgrip strength in this study [14]. These inconsistent results may be caused by different ancestry of exposure (handgrip strength) and outcome (CAD), the number of genetic variants selected as IVs, different methods applied, and even potential pleiotropic confounding IVs (body fat mass-related genetics variables). Compared to these two previous TSMR analyses [13, 14], more selected IVs were utilized to increase the interpretation of exposures. Several sensitivity analyses were performed to reduce the potential pleiotropic IVs, and results indicated a decreased causal effect of handgrip strength on risk of CAD. Epidemiological evidence has also suggested that muscle strength is negatively associated with CVD events and mortality [15], and similar results were also obtained between handgrip strength and CVD in UK individuals with one-sample MR analysis [15, 16].

The main strength of this study is the application of bidirectional MR design, which is more robust to confounding and reverse causation and could clarify the causal direction between sarcopenia-related traits (muscle mass and muscle strength) and CAD. Secondly, we included absolute handgrip strength, which might be more appropriate to assess muscle strength than relative handgrip strength (handgrip strength/body weight), as relative grip strength may not only represent a change in muscle strength but also a change in body fat mass and bone mass. Additionally, several sensitivity analyses were performed to ensure the valid estimation of true MR causal effect size. Furthermore, as sarcopenia and CAD are closely related to body fat mass, we also detected and removed the potential pleiotropic effects introduced by those SNPs associated with body fat mass-related traits (body fat mass, body fat distribution and body fat percentage) by obtaining their association effect size from the GWAS Catalog (https://www.ebi.ac.uk/gwas) [18]. Finally, both sarcopenia and CAD unrelated trait (myopia) was used as negative control to demonstrate the validity of selected IVs, further validating our analyses and results.

The genetic variants used as IVs in TSMR analysis must satisfy three assumptions as follows (Figure 1A): 1) IVs are strongly associated with exposure. 2) The IVs are independent of any known confounders. 3) The selected IVs are conditionally independent of outcome, given exposure and potential confounders. The second and third assumptions are known as independence from pleiotropy [23]. In the current study, we performed a bi-directional MR study design to clarify the causal association between sarcopenia-related traits (muscle mass and muscle strength) and CAD with independent GWAS summary-level dataset (Figure 1B). In the first stage, we assessed whether sarcopenia-related traits were causally related to CAD. In the second stage, we also examined whether genetically driven CAD was causally associated with sarcopenia-related traits. 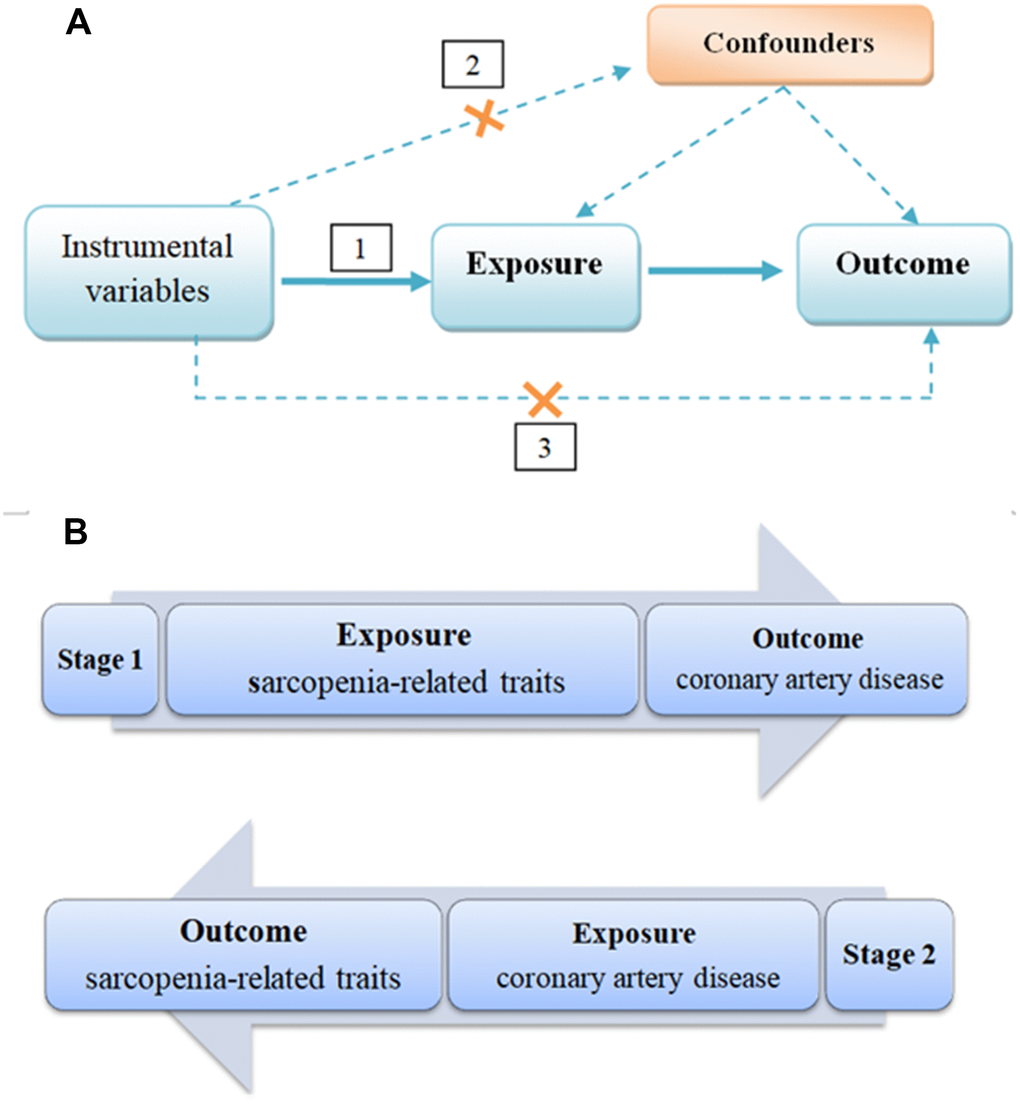 Selection and validation of IVs

To satisfy the three assumptions of MR (Figure 1A), we firstly selected independent (linkage disequilibrium r2 < 0.001) [28] SNPs that were strongly (p < 5 × 10−8) associated with exposure. Then, we obtained the corresponding effect estimates of these SNPs in outcome GWAS summary statistics. For the SNPs that were not available in the outcome, we used proxy SNPs that were highly correlated (r2 > 0.8) with the requested SNPs.

Additionally, MR-Egger regression was applied to assess the horizontal pleiotropy of selected IVs [23], and the intercept that deviates from the origin may provide evidence for potential pleiotropic effects across the IVs. We also performed MR-PRESSO to identify and remove pleiotropic IVs [29]. To further validate the strength of the selected IVs, we computed the F statistic of selected IVs using an online tool (https://sb452.shinyapps.io/overlap) [30]. F statistics greater than 10 are often considered as powerful enough to mitigate any potential bias of the causal IV estimate. Finally, MR-Steiger test was conducted to calculate the pooled variance explained in exposure and outcome by the selected IVs (r2) [31], and to further assess whether the variance explained in the exposure is larger than that in the outcome.

To further ensure the valid estimation of the true MR causal effect, we conducted several sensitivity analyses. Firstly, weighted median estimate was performed because it tends to provide valid estimates when at least 50% of information is derived from valid IVs [35]. Secondly, the MR might fail if the selected IVs are weak instruments. Therefore, we carried out a recently proposed method called Robust Adjusted Profile Score (RAPS), which considers the measurement error in SNP-exposure effects and is unbiased even when there are many (e.g. hundreds of) weak instruments [36]. Also, RAPS is robust to systematic pleiotropy. Thirdly, MR-PRESSO was performed to identify and remove the possible pleiotropic IVs, assuming that at least 50% of the IVs were valid IVs [29]. MR-PRESSO can also identify outlier IVs and provides outlier-adjusted estimates. MR-PRESSO detects pleiotropy by assessing outliers among the selected IVs contributing to the MR estimate and provides adjusted estimates. MR-PRESSO analysis was only carried out for associations with a significant global test p value (p < 0.05). Next, in order to guarantee that the MR estimates were not influenced by the inclusion of proxy SNPs, we repeated the analysis after excluding proxy SNPs. Finally, as muscle mass and CAD were closely related to body fat mass, we intend to exclude the potential pleiotropic effects introduced by those SNPs associated with body fat-related traits (body fat distribution and body fat percentage) by obtaining their association effect size from GWAS Catalog (https://www.ebi.ac.uk/gwas) [18].

To further demonstrate the validity of the selected IVs, we included myopia as negative control in our analysis, as there is little evidence presented that sarcopenia and CAD are associated with myopia. The summary statistics of myopia were derived from UK Biobank imputed genotype data, including 335,700 individuals of European descent [20].

All the analyses were performed using R statistical software (Version 3.4.2) with the R packages “TwosampleMR”, “MendelianRandomization” and “MRPRESSO”.

The authors would like to thank MR-base dataset for providing relevant publicly available summary statistics. Thanks to all the consortiums that provide public data, which have been mentioned in the data sources section in this study.

The authors declare that the research was conducted in the absence of any commercial or financial relationships that could be construed as a potential conflicts of interest.