Copyright: © 2020 Chen and Zhao. This is an open access article distributed under the terms of the Creative Commons Attribution License (CC BY 3.0), which permits unrestricted use, distribution, and reproduction in any medium, provided the original author and source are credited.

Osteosarcoma is the most common type of primary malignant bone tumor in children and young adults [1]. Despite the availability of treatments such as surgery and chemotherapy, the five-year survival rate is less than 70% and has not improved much in the past few decades [2, 3]. In patients with metastatic osteosarcoma, the prognosis is particularly dismal, as the five-year survival rate is less than 30%. About 50% of osteosarcoma patients develop fatal lung metastases in the later stages of the disease [4]. In developed countries, 95% of cancer-related deaths are caused by metastases. Therefore, new diagnostic and therapeutic methods are urgently needed to improve the prognoses of these patients.

Although the study of lung metastasis-specific biomarkers for osteosarcoma has expanded over the years, the clinical applications of this research are still limited. More recently, studies employing next-generation sequencing and other screening technologies have identified a series of promising biomarkers with predictive and diagnostic value for osteosarcoma-associated lung metastasis [5]. However, many studies have demonstrated that cancer growth and metastasis are determined not only by the intrinsic activities of the tumor, but also by the immune cells in the tumor microenvironment [6, 7, 8]. For example, tumor-associated macrophages promote tumor progression to varying degrees by cultivating cancer stem cells, promoting genetic instability, supporting metastasis and suppressing protective adaptive immunity [9]. Additionally, inflammatory cells and tissues guide the formation of the blood vessels that nourish growing tumors [10, 11]. Thus, the immune system is important for both carcinogenesis and tumor angiogenesis [12, 13]. The functional components of tumor-infiltrating immune cells (TIICs) change subtly with changes in the host immune system, and these cells have been reported to be associated with the clinical prognosis of cancer patients [14]. TIICs exhibit complex interactions with malignant cells in the tumor stroma [15]. Because the immune system supports both host defense and tumor progression, it is a key determinant of prognosis.

Osteosarcoma is an immunosensitive tumor type that is infiltrated by macrophages, monocytes, dendritic cells, neutrophils, mast cells and other heterogeneous cell types, which have high prognostic value according to their type, density and location [9, 16, 17]. In previous studies, the immune cell compositions of tumors have been assessed using immunohistochemistry and flow cytometry, but these technologies have limitations. Immunohistochemistry can only be used to evaluate a few immune cell types at the same time, and flow cytometry usually depends on multiple markers to define certain cell types, but the proteins are limited by the number of fluorescent channels. Therefore, no studies have elucidated the prognostic value of different TIIC subgroups in osteosarcoma.

The biological tool CIBERSORT (Cell-type Identification By Estimating Relative Subsets Of RNA Transcripts) extensively deconvolutes gene expression data and uses complex algorithms to quantify many immune cell types in heterogeneous samples [18]. Therefore, this tool can effectively determine the diversity and landscape of TIICs. In this study, we used CIBERSORT to quantify 22 TIIC subsets in osteosarcoma, in order to explore their relationship to metastasis and survival. Our data have revealed the association between intratumoral immune cell heterogeneity and osteosarcoma progression.

Distribution of TIICs in metastatic and non-metastatic osteosarcoma tissues 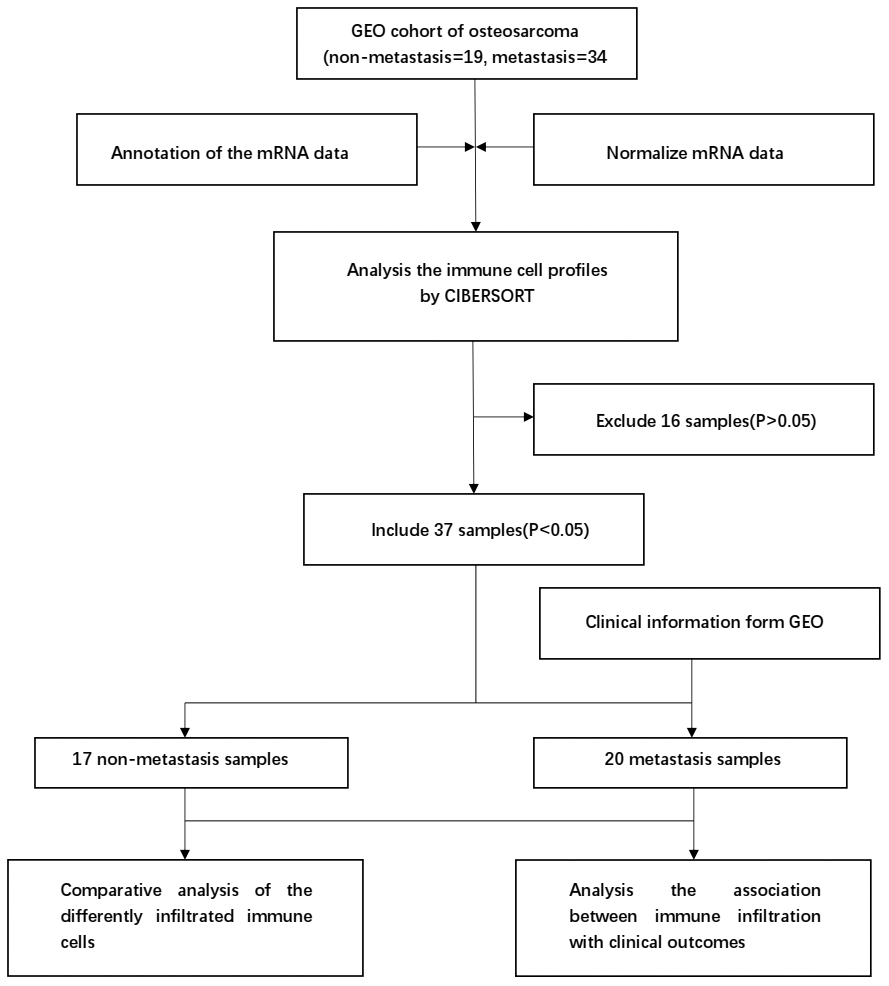 Figure 1. Flowchart detailing the study design and samples at each stage of analysis. 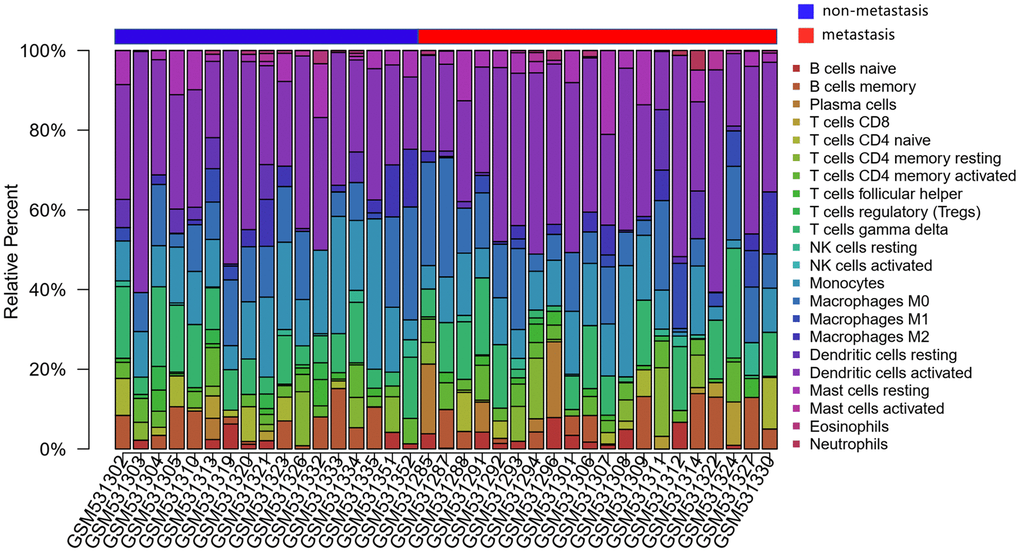 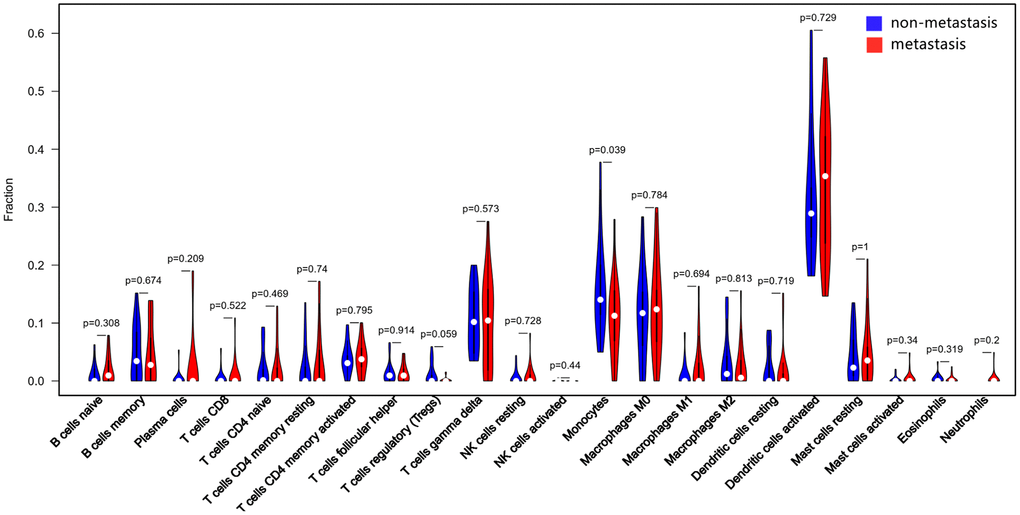 Figure 3. Quantification of the differing TIIC subtype distributions between non-metastatic and metastatic tissues. The results were generated using the R software package vioplot.

Correlations between pairs of immune cells

Association of immune infiltration with prognosis in osteosarcoma patients

As mentioned above, the five-year survival rate of patients with metastatic osteosarcoma is extremely low, so new diagnostic and treatment methods are urgently needed to improve the prognoses of these patients. We analyzed the correlation between immune infiltration and survival time in the enrolled osteosarcoma patients, and found that a higher proportion of monocytes was associated with a better prognosis (P=0.045) (Figure 5). There were no differences in survival time according to the levels of the other TIICs.

Figure 5. Survival plots based on the median proportions of specific immune cell subsets. (A) Kaplan-Meier curves showing the different survival rates in patients with high and low-densities of monocytes. (B, C) There were no differences in patients’ survival times according to the levels of M1 and M2 macrophages. The results were generated using the R software package survival.

Immune clusters associated with the effectiveness of chemotherapy in osteosarcoma patients

Next, we designed a nomogram based on the Huvos necrosis grade and the TIIC density to assess the relationship between TIICs and the effectiveness of chemotherapy. The fractions of resting mast cells (P=0.006), follicular helper T cells (P=0.018) and monocytes (P=0.024) were higher in patients with Huvos necrosis grades of 2, 3 and 4 than in those with a Huvos necrosis grade of 1 (Figure 6). These results indicated that higher fractions of resting mast cells, follicular helper T cells and monocytes were associated with greater chemotherapeutic effectiveness.

Figure 7. The formation of lung metastases. (A) Representative images of micro-CT scans. Metastatic tumors can be seen. (B) Lung photograph from one mouse. Red arrows indicate metastatic nodules. 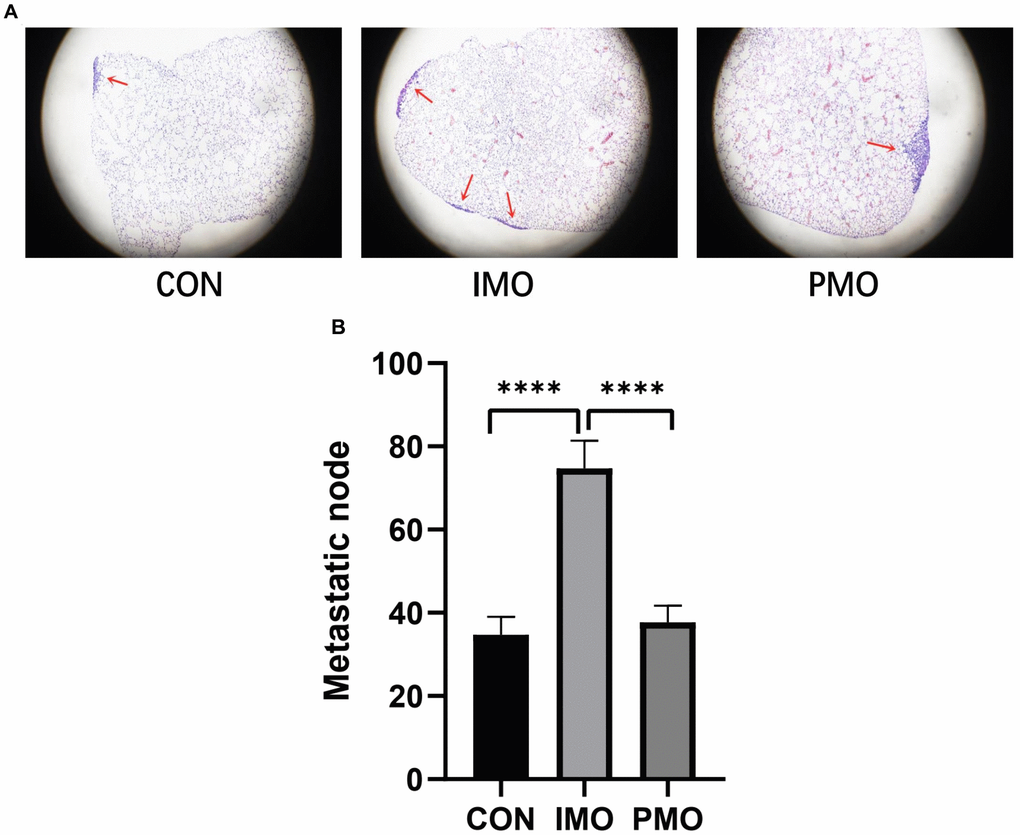 Figure 8. PMOs inhibited the metastasis of osteosarcoma. K7M2 WT cells were injected into the tail veins of mice in the control, IMO and PMO groups, and metastatic nodules in the lungs were quantified. (A) H&E staining of lung tissues from each group. Representative images are shown. (B) The number of metastatic nodules was counted. ****, P<0.0001 in an unpaired two-tailed t test.

Although more and more studies have identified biomarkers to predict osteosarcoma-derived lung metastasis, the clinical applications of these biomarkers have been limited, and screening studies for osteosarcoma patients are still mostly in the experimental stage. TIIC subpopulations such as M1 macrophages, natural killer (NK) cells and memory T cells are usually associated with a good prognosis, while Treg cells and M2 macrophages are associated with a poor prognosis [23–25]. However, due to technical limitations, previous research has had a very narrow view of the immune response, and the distribution and proportion of TIICs has been determined based on too few specific markers.

In this study, we used CIBERSORT to assess whether immune cell infiltration differed between 20 metastatic and 17 non-metastatic osteosarcoma samples. We detected 22 types of TIICs, and found that monocyte levels were higher in non-metastatic than in metastatic samples, suggesting that monocytes may inhibit the metastasis of osteosarcoma. There are at least two types of circulating monocytes in the blood: classical IMOs and nonclassical PMOs. Classical IMOs (CCR2HighLy6C+ in mice; CCR2High CD14+CD16- in humans) promote tumor metastasis upon their recruitment to tumor sites [26, 27]. On the contrary, nonclassical PMOs (CX3CR1HighLy6C- in mice; CX3CR1HighCD14-CD16+ in humans) have been reported to prevent melanoma metastasis to the lungs by recruiting NK cells [28, 29].

When we assessed the association between TIIC levels and the overall survival times of osteosarcoma patients, we found that patients with higher monocyte densities exhibited longer overall survival times. This finding was consistent with our earlier finding that higher monocyte levels inhibited the metastasis of osteosarcoma. We also assessed the efficacy of chemotherapy by histologically analyzing tumor necrosis and grading it according to the Huvos score [33]. We found that higher proportions of resting mast cells, follicular helper T cells and monocytes were associated with better chemotherapeutic effects.

Based on the results of our bioinformatic analysis and previously published studies, we designed animal experiments to determine which subsets of monocytes could inhibit osteosarcoma metastasis. The number of pulmonary metastatic nodules of osteosarcoma was significantly greater in mice lacking PMOs than in those with normal PMO levels. These results demonstrated that PMOs inhibited the pulmonary metastasis of osteosarcoma, consistent with the results of Hanna et al. [11, 29, 34]. However, further research is needed to determine how PMOs recognize tumor cells to prevent their metastasis to the lungs, and whether PMOs directly kill tumor cells.

In conclusion, our analysis of 22 immune cell subsets in osteosarcoma revealed that certain TIICs were significantly associated with clinical outcomes and had the potential to identify patients who could benefit from chemotherapy. We found that PMOs inhibited the pulmonary metastasis of osteosarcoma, and that resting mast cells, follicular helper T cells and monocytes were associated with good chemotherapeutic results.

The expression data were downloaded from the Gene Expression Omnibus (GEO) database (http://www.ncbi.nlm.nih.gov/geo) [19]. GSE21257, a microarray dataset of 53 pre-chemotherapy biopsies from osteosarcoma patients, and these data were analyzed using the CIBERSORT signature. The patients’ clinical characteristics were also retrieved. Metastases occurred in 34 of the 53 osteosarcoma patients within five years, and did not occur in the other 19 patients. The samples from these 53 patients were included in subsequent analyses.

Normalized gene expression data were used to quantify the relative proportions of 22 types of infiltrating immune cells using the analytical tool CIBERSORT. The 22 cell types identified by CIBERSORT include B cells, T cells, monocytes, NK cells, macrophages, mast cells, dendritic cells, neutrophils and so on. CIBERSORT is a gene expression-based deconvolution algorithm that uses a set of reference gene levels (a “signature matrix” of 547 genes) to determine the composition of immune cells in a sample. The proportions of cell types in tumor samples with mixed cell types can be inferred using support vector regression based on this signature matrix. After the CIBERSORT program was used, the distribution of the 22 types of infiltrating immune cells, the correlation coefficients and the P values were determined.

Four- to eight-week-old female BALB/c mice (Changsheng, Liaoning, China) were bred in pathogen free conditions at the Animal Center of China Medical University. All animal studies were performed in accordance with the requirements of the Animal Research Committee at China Medical University. K7M2 WT cells were purchased from the Cell Bank of the Chinese Academy of Sciences (November 2019). The cells were maintained in Dulbecco’s Modified Eagle’s Medium (HyClone) with 10% fetal bovine serum (HyClone), 100 mg/mL penicillin (Invitrogen) and 100 U/mL streptomycin (Invitrogen) at 37 in a 5% CO2 and 95% air incubator.

In vivo depletion of blood monocytes

K7M2 WT cells (1 x 106) were injected into the tail veins of mice, ten days after a single injection, lung tumorigenesis was assessed using micro-CT. After the mice were euthanized, their lungs were dissected and fixed with formalin. In order to evaluate the extent of tumor metastasis more accurately, we fixed the right lung tissues of the mice, embedded them in paraffin and sectioned them at 100-μm intervals. H&E staining was performed so that metastatic nodes could be observed and counted under a microscope.

The levels of the 22 types of infiltrating immune cells in patients’ samples were assessed with the Wilcoxon signed rank test, and a violin plot was constructed using the R package vioplot (CRAN.R-project.org/package=vioplot). The R package corrplot (CRAN.R-project.org/package=corrplot) was used to evaluate the correlations between pairs of immune cell subsets.

All statistical tests were two-sided, and a P value <0.05 was considered statistically significant.

We downloaded the data from a publicly available database: GEO (accession number: GSE21257).

Lin Zhao designed the study and drafted this manuscript. Ting Chen performed the experiments, analyzed the data and reviewed and revised the manuscript. All authors read and approved the final manuscript.

This work was financially supported by grants from the Liaoning Revitalization Talents Program (No. XLYC1807201), Key R&D Guidance Plan Projects in Liaoning Province (2019JH8/10300011) and Shenyang S&T Projects (19-109-4-09). The authors would like to acknowledge the Key Laboratory of Precision Diagnosis and Treatment of Gastrointestinal Tumors, Ministry of Education (China Medical University, Shenyang, China) for providing the space and equipment for conducting the experiments.