Copyright: © 2020 Moreno-Valladares et al. This is an open access article distributed under the terms of the Creative Commons Attribution License (CC BY 3.0), which permits unrestricted use, distribution, and reproduction in any medium, provided the original author and source are credited.

The presence and functional role of T cell infiltration in human brain parenchyma with normal aging and neurodegeneration is still under intense debate. Recently, CD8+ cells have been shown to infiltrate the subventricular zone in humans and mice with a deleterious effect on neural stem cells. However, to which extent T cell infiltration in humans also occurs in other regions such as cortical areas and, especially, white matter (WM) has not yet been addressed. In this work, we report a low-grade infiltration of T cells (CD3+, CD4+ and CD8+) in the WM of aged individuals that is also observed at similar levels in patients with neurodegenerative disorders (Alzheimer´s disease). In particular, CD3+ and CD8+ cells were increased in perivascular and parenchymal WM and cortical regions (enthorinal cortex). These results reveal that T cell infiltration in brain parenchyma occurs with physiological and pathological aging in several regions, but it seems to be lower than in the subventricular zone neurogenic niche.

Aging consists of a progressive loss of functional capacities with age, which has a strong impact on brain-related processes such as cognition or motor abilities [1]. The study of brain´s gray matter has drawn the attention of scientific community in the research of those aging-associated mechanisms underlying brain dysfunction and neurodegenerative disorders. However, the role of white matter (WM) is gaining momentum in this field [2].

The WM represents the portion of the brain composed of myelinated axons and myelin-producing glial cells, among others, and has an essential role in the efficient transmission of electric signals throughout the brain to enhance neuronal connectivity and a rapid information processing. With aging, the WM undergoes structural and functional alterations that can lead to neurological, behavioral and cognitive impairment, which may contribute to the cognitive decline and reduced neurogenesis reported in the elderly [2]. In addition, WM malfunction may influence the development and progression of neurodegenerative disorders such as Alzheimer´s disease (AD) and Parkinson´s disease [2, 3]. Among these age-related changes in WM, loss of volume and integrity, reduction of myelination, changes in the vasculature leading to hypoperfusion, and increased pro-inflammatory environment, have been reported [2].

The role of inflammation in aging and age-related disorders is still under debate, especially in the case of brain. However, it is clear that a chronic neuroinflammation occurs with age and that has a profound impact on normal brain function [4]. Concerning WM, a recent work reported that microglia-mediated inflammation is specifically increased with age and neurodegeneration (AD) in the WM of both humans and mice, with no additive effects, even in middle-age subjects [5]. In addition to microglia, other immune cells have been identified in human brain parenchyma with aging and age-related neurodegenerative diseases. Thus, CD3+ T cells and cytotoxic CD8+ T cells infiltrate the subventricular zone (SVZ) in aged individuals [6, 7], and also the AD brain [7–9].

Despite the increasing evidence that points out a relevant role of WM neuroinflammation in aging brain and neurodegeneration, there are scarce studies in humans that address this issue so far. In this work, we studied the presence of T cell infiltration and activated microglia in human white and gray matter from young and aged individuals, as well as in patients diagnosed with neurodegenerative disorders.

To characterize the populations of T cells in the WM of aged individuals, we performed immunofluorescence analysis to detect CD8, CD4 and CD3 positive cells. Confocal analysis revealed that CD8+ cells were also positive for CD3 in aged individuals and patients with AD (Figure 1A and Supplementary Figure 1). There were, as well, cells co-stained for CD3 and CD4 markers in the same region (Figure 1B and Supplementary Figure 1). Additionally, WM from aged individuals presented enriched staining for CD68 and CD163, markers of microglia (Figure 1C, 1D). These results show the existence of cytotoxic CD8+ T cells in a pro-inflammatory environment in the WM of elderly individuals. 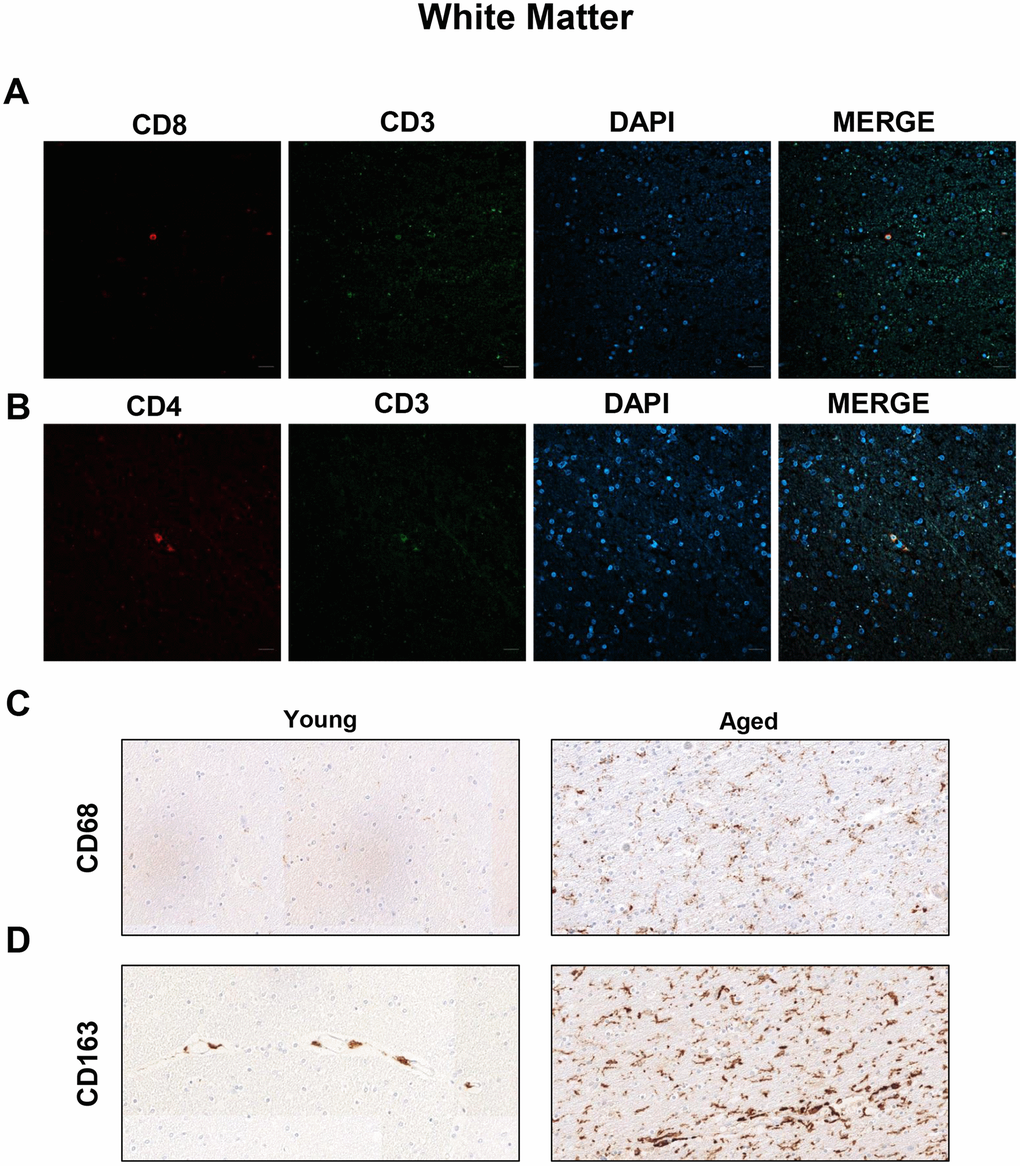 Figure 1. Presence of cytotoxic CD8+ T cells in the white matter of aged individuals. (A) Co-immunofluorescence of CD8 with CD3 marker (n=4). (B) Co-immunofluorescence of CD3 with CD4 marker (n=4). Cell nuclei were counterstained with DAPI. Scale bar: 20 μm. (C, D) Representative images of CD68 and CD163 microglia markers in young and aged individuals (n=3). Images appear to be spliced likely consequence of scanning and were obtained using the 20× objective. 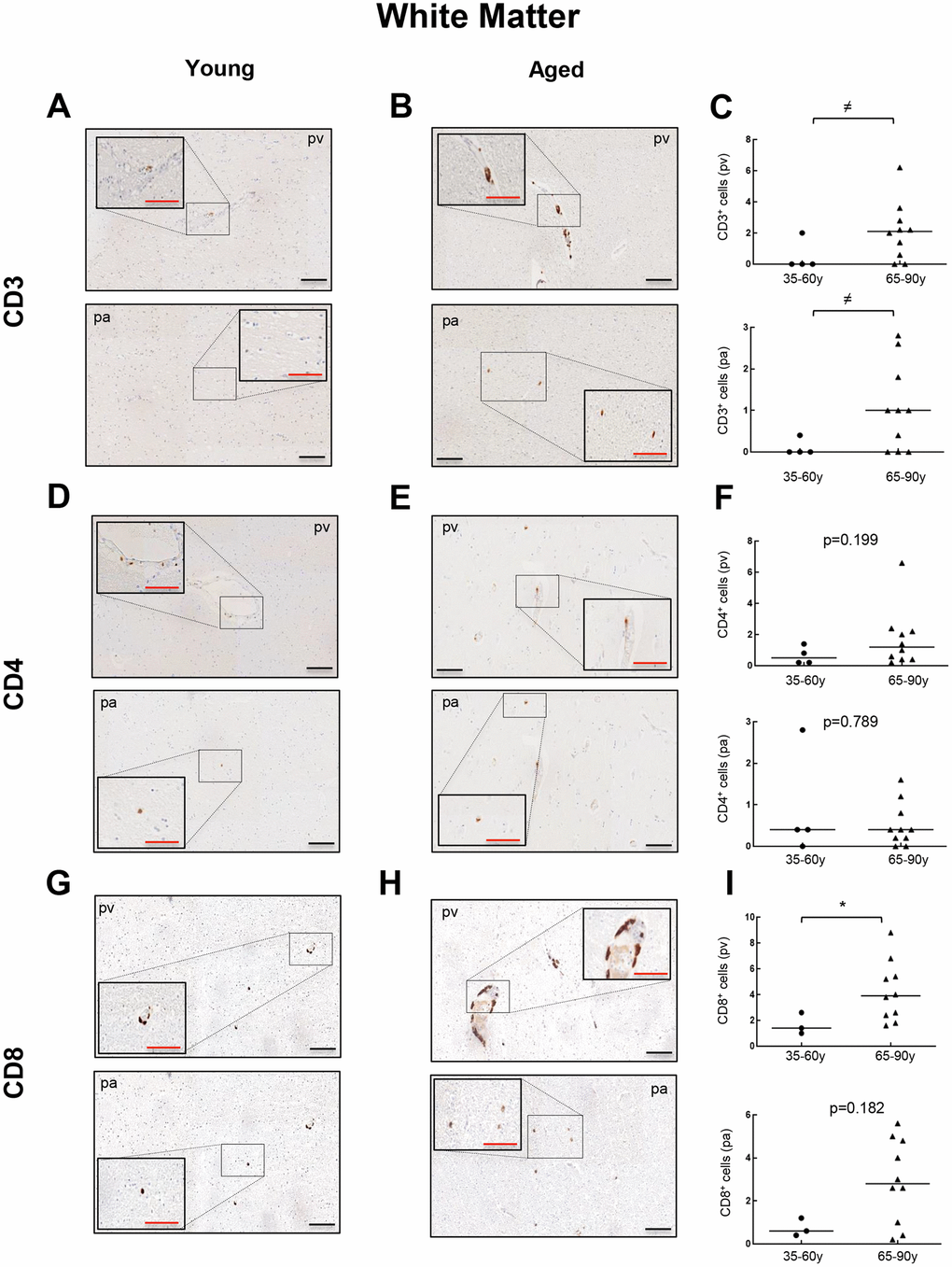 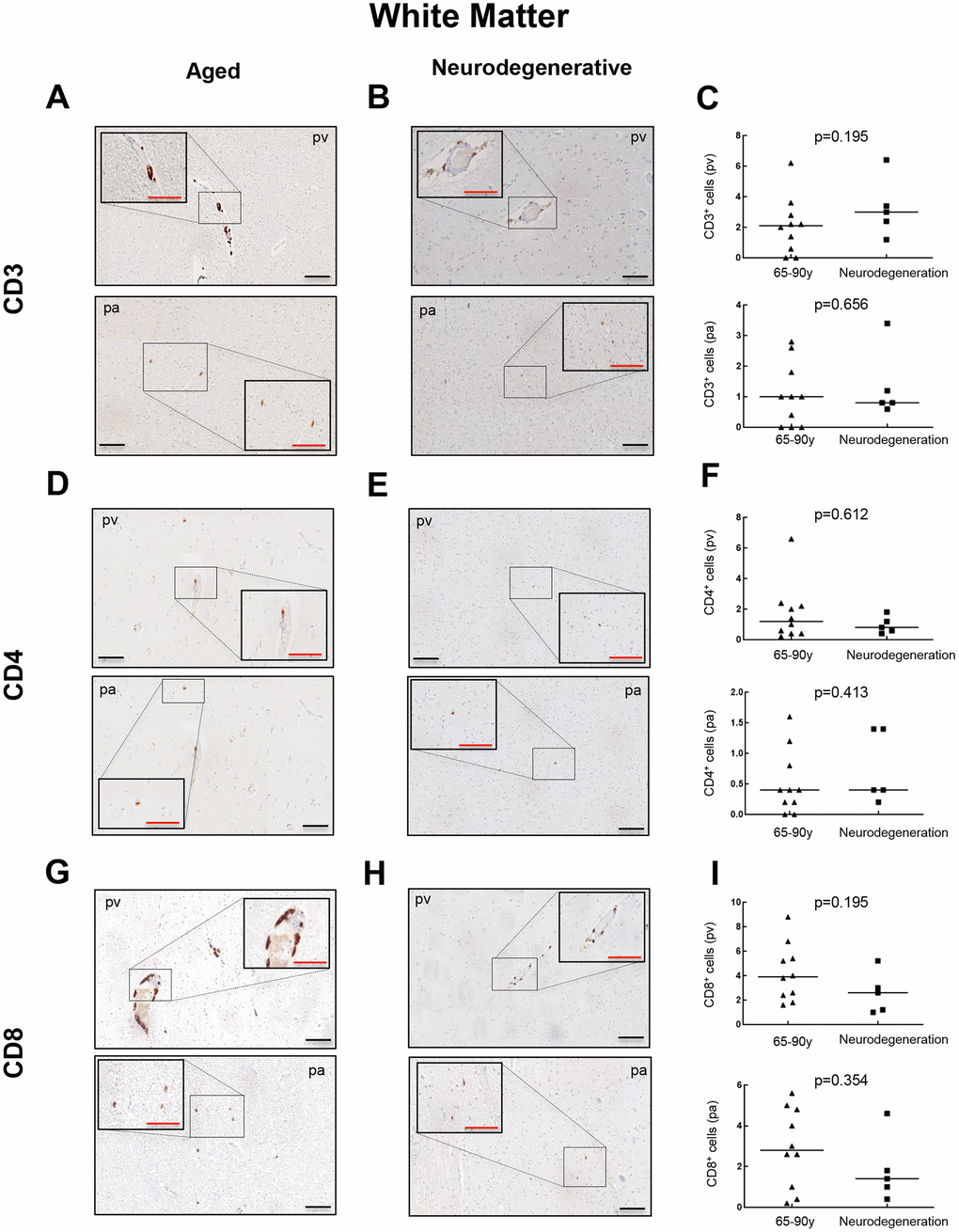 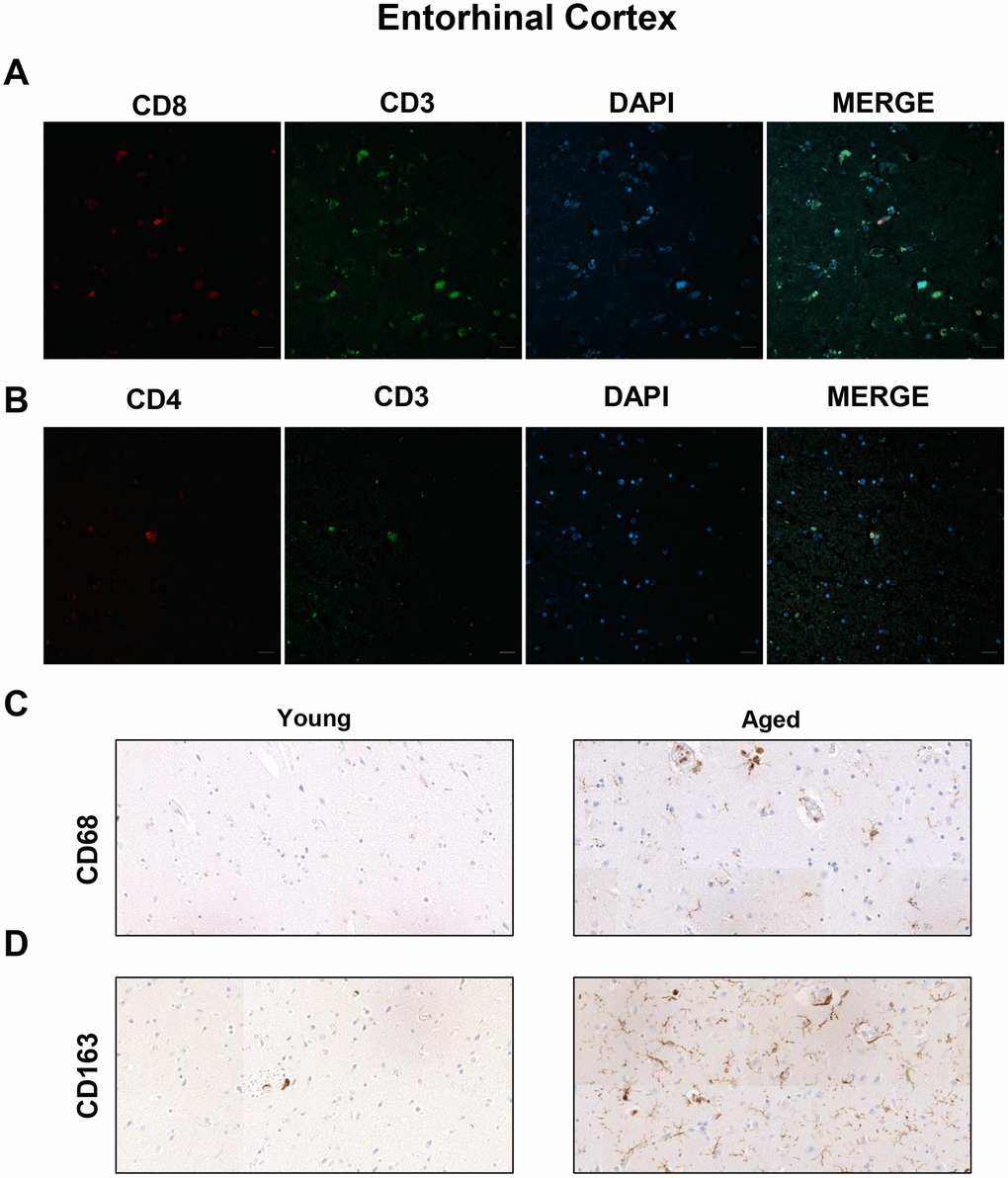 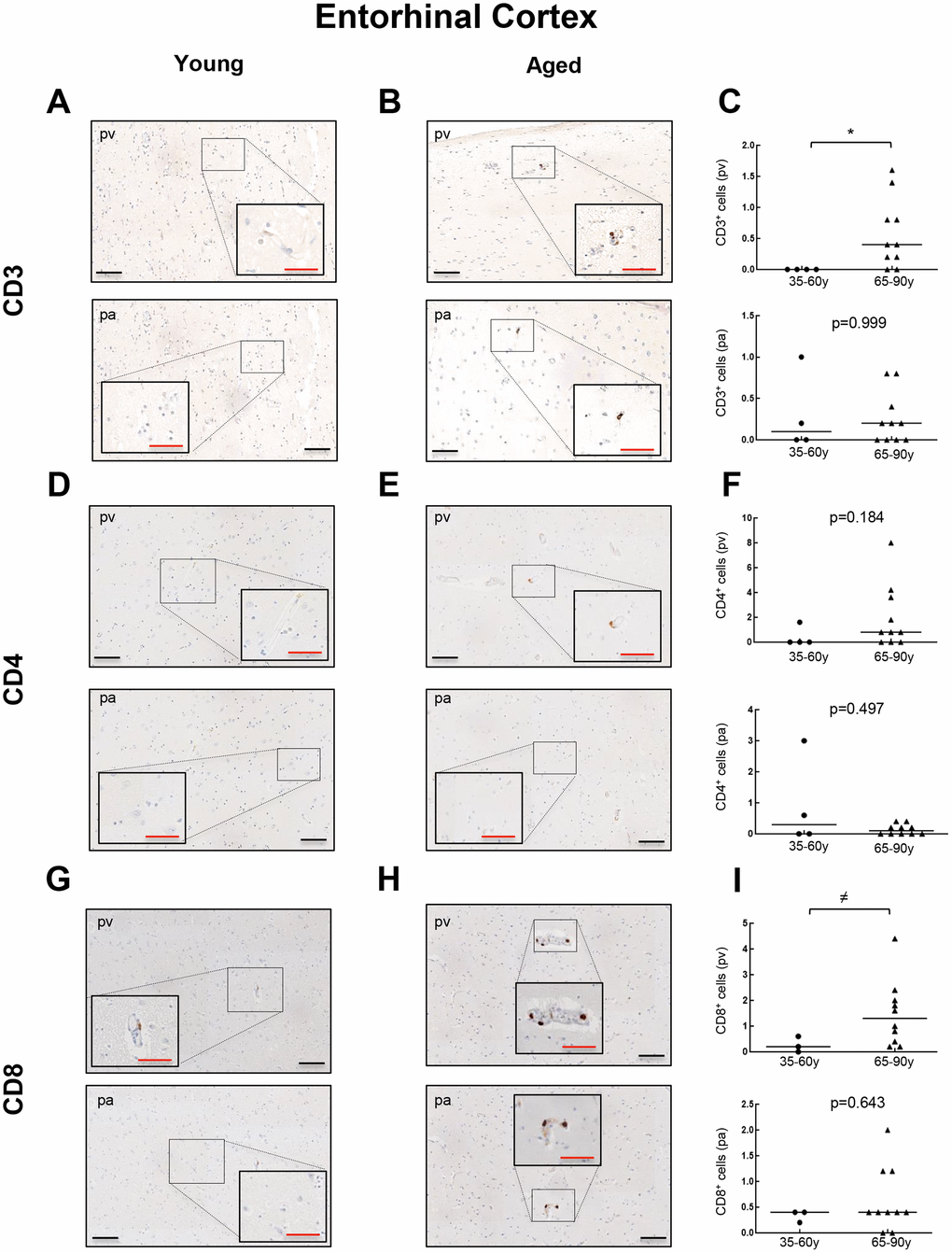 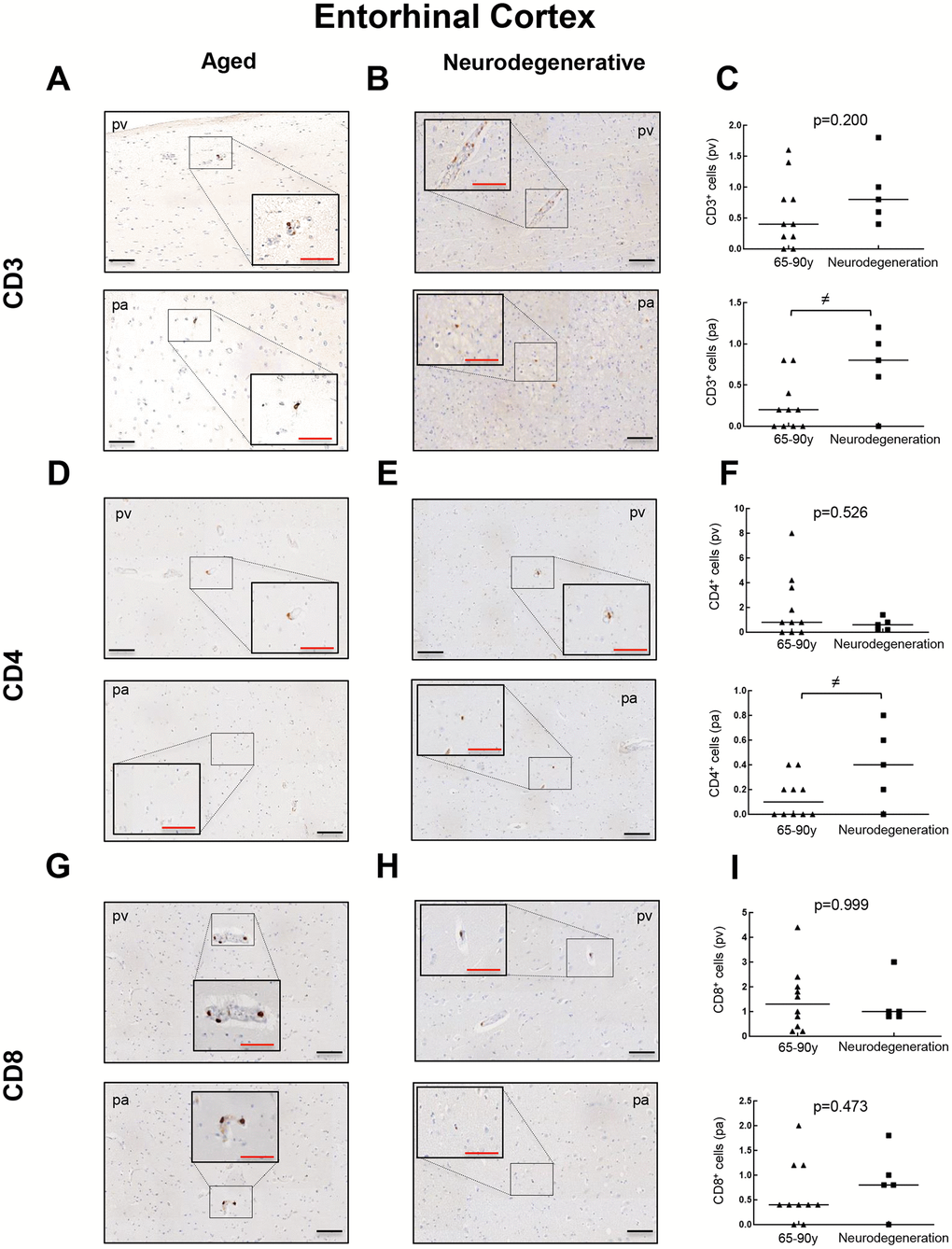 T cell infiltration in human brain parenchyma with normal aging remains a largely unexplored field, despite the well-known development of a chronic, pro-inflammatory environment in the aged brain that impact its normal function [10]. These data are especially scarce in WM, to which little attention has been paid. Trying to provide new insight in this field, we report a low-grade infiltration of CD3+ and CD8+ cells in the WM and EC of aged individuals, also with neurodegenerative disorders. Intriguingly, we detected a higher proportion of CD8+ cells than CD3+ cells, which might suggest some methodological limitations or the presence of at least one CD8+ cell subpopulation different from cytotoxic CD3+/CD8+ T cells. In this sense, some natural killer cells carry CD8 but not CD3 [11]. Despite the low levels, we show an increase of CD3+ and CD8+ cells in the WM of aged individuals and neurodegenerative patients compared to young ones, in both perivascular and parenchymal regions. Conversely, lower level of T infiltration is observed in the EC, where less than 2 cells per mm2 for all markers were found to infiltrate the parenchyma in the vast majority of patients. The number of positive cells is lower than the increase of CD3+ cells, and especially CD8+ cells, in the SVZ of old individuals [6, 7], and in those individuals who displayed neurodegeneration in our cohort and others [7, 8]. However, T cell infiltration seems to be widespread in the WM of aged mice, where CD3+ T cells are predominantly accumulated with aging [12]. In this sense, infiltration of CD3+, CD4+ and CD8+ cells into the brain parenchyma and perivascular regions is also more frequent in aged mice compared to young ones after cytokine stimulation [13]. It is therefore tempting to suggest that T cell infiltration in humans with aging is mostly associated with stem regions such as SVZ, where it would have a stronger impact mainly through the cytotoxic activity of CD8+ cells, rather than EC or WM. We also report an increased expression of CD68 and CD163 microglia markers, which suggests a pro-inflammatory environment in the aged WM and cortex. Elevation of microglia, measured by CD68 and IBA1, was also observed in the SVZ neurogenic niche of the same cohort used in this study [7]. It does seem that neuroinflammation mediated by microglia activation is predominant in the WM with aging and neurodegeneration [5], which could indirectly reinforce a role of T cell infiltration in the SVZ with physiological and pathological aging.

Interestingly, we found an increase for CD3+ and CD8+ cells in neurodegenerative patients (all of them with diagnosis of AD) compared to young ones in all regions analyzed excluding EC parenchyma, which is in line with our results in aged patients without neuropathological lesions. Additional works have reported a marked increment of CD8+ cells in AD brains compared to healthy aged brains [8, 14, 15], including hippocampal and cortical regions. Although differences in antibodies, IHC protocols, the anatomical regions explored and also different criteria for T cell quantification (e.g., we excluded those T cells inside blood vessels) might explain these controversial results, our data highlight that T cell infiltration seems not to be elevated in AD pathogenesis from a previous non-neuropathological state, but also it might be contributing to a yet established pathological context.

In summary, we report a low degree of T cell infiltration in human white and gray matter, at similar levels in both aged individuals with no neuropathological injuries and neurodegeneration, being especially remarkable in the case of WM. T cell infiltration also correlates with the presence of a pro-inflammatory state. These results reinforce the role of T cells in brain during physiological and pathological aging, but also point out a more relevant role of T cell-related inflammation in critical areas for neurogenesis such as the SVZ rather than WM or cortical regions such as the EC.

Human brain samples (n=19) were collected from autopsies conducted at Donostia University Hospital (Spain). Postmortem interval (PMI) was limited to 12 hours due to its effects on brain proteins. Brains were kept in a fixative solution (4% paraformaldehyde) for a period of not less than 24 h. Samples were divided in three groups: “young” (n=4; individuals ranged from 36 to 58 years old), “old” (n=10; individuals aged 65-87 years old) and “neurodegenerative” (n=5; individuals between 60-90 years old). Inclusion criteria for selection of “young” and “old” patients included the absence of diagnosis of neurodegenerative disorders as well as the lack of neuropathological injuries in the regions analyzed. Patient´s information is described in Table 1. This study was approved by the Clinical Research Ethics Committee of the Donostia University Hospital (AMM-MHP-2019-1) and adhered to the tenets of the Declaration of Helsinki by the World Medical Association regarding human experimentation.

Table 1. Clinical information of individuals included in this study.

Immunofluorescence was performed in formalin fixed brain samples. Paraffin embedded tissue sections were deparaffinized in xylene and rehydrated in a series of graded alcohols and then heated in citrate buffer for 30 min for antigen retrieval. Tissues were permeabilized with 0.5% Triton X-100 (PBS-T) and blocked for 1 h with 1% bovine serum albumin and 5% goat-serum in PBS-T. Sections were incubated at 4ºC overnight with the following primary antibodies: anti-CD3 (ab5690, Abcam), CD4 (ab133616, Abcam) and CD8 (ab4055, Abcam). The sections were washed 3 times for 5 min with PBS 0.1% tween-20 and incubated for 1 h at room temperature in darkness with Alexa Fluor 488 goat anti-rabbit (Invitrogen) and Alexa Fluor 555 goat anti-rabbit (Invitrogen) secondary antibodies. Nuclear DNA was stained with DAPI (Sigma-Aldrich). The preparation was mounted with Fluoro-Gel mounting media and immunofluorescence was evaluated with the Zeiss LSM 900 confocal microscope.

The quantification of T cells positive for the different markers was manually performed in entire coronal sections from previously scanned images. Two brain regions were checked: EC and the WM associated. We randomly selected five areas per region and defined a visual field of 1 mm2 each, within which all T cells were considered. We counted all parenchyma-infiltrating positive cells (pa) and also those located in the vascular walls (pv). T cells were identified as CD3+ cells, helper T cells as CD4+ and cytotoxic T cells as CD8+.

The number of T cells was expressed as average number of positive cells per unit area (mm2) for each marker. Two-tailed Mann-Whitney U test was performed to compare CD3, CD4 and CD8 positive cell counts between groups. Asterisks (≠, *, ** and ***) indicate statistically significant differences (p<0.1, p<0.05, p<0.01 and p<0.001, respectively).

M.A-S obtained a Sara Borrell (CD19/00154) postdoctoral fellowship. L.M-C and A.S-A were recipients of a predoctoral fellowship from the Department of Education of the Basque Government and Instituto Salud Carlos III (FI17/00250), respectively.

The authors declare no conflicts of interests.