Copyright: © 2020 Fu et al. This is an open access article distributed under the terms of the Creative Commons Attribution License (CC BY 3.0), which permits unrestricted use, distribution, and reproduction in any medium, provided the original author and source are credited.

With a rapidly increasing prevalence worldwide, abdominal obesity has become a significant public health problem [1–5]. Compared to subcutaneous fat, abdominal fat is more pro-inflammatory; it was shown for instance that the synthesis of components of the complement system, a key mediator of inflammatory responses and innate immunity, is exacerbated in abdominal fat depots of obese individuals [6, 7]. In turn, excessive accumulation of abdominal fat is linked to the development of metabolic syndrome and a range of chronic health conditions including diabetes, cardiovascular disease, and cancer. Not surprisingly, studies have shown that obesity is associated with reduced life expectancy [8, 9]. As a hallmark of human aging, the accrual of abdominal fat is likely to have, also in non-obese people, a significant impact on longevity. Periumbilical fat is measured by noninvasive ultrasound and represents a useful tool in determining abdominal obesity. Whereas limited data on the association between periumbilical fat and antibody and complement systems are currently available from studies carried out in the United States and European countries, studies addressing these aspects in Chinese oldest-old population are still lacking [10, 11]. Asians are predisposed to have a higher ratio of abdominal obesity to overall obesity than Westerners, suggesting that the adverse impact of abdominal obesity on longevity may be more pronounced in the Asian population [12, 13]. So far, no studies have analyzed the potential association between periumbilical fat and longevity in relation to antibody and complement systems.

Centenarians have been suggested to have delayed or escaped onset and interaction of age-related abnormalities, and are thus considered a prototype of successful aging [17, 18]. Therefore, studies analyzing associations between genetic, physical, and metabolic factors influencing centenarians will provide valuable information to formulate strategies promoting successful aging and longevity [10, 19]. To our knowledge, few studies have specifically discussed these associations in Chinese oldest-old population, including centenarians. The China Hainan Centenarian Cohort Study (CHCCS) was launched to establish a multidimensional database of longevity-related information. Based on demographic data from Hainan, the area with the highest population density of centenarians in China, the CHCCS constitutes a significant population-based sample of Chinese centenarians. Based on CHCCS data, the current study was designed to test the hypothetical association between periumbilical fat and longevity mediated by the antibody-complement systems and cardiac structure and function in a Chinese oldest-old population (Figure 1A). 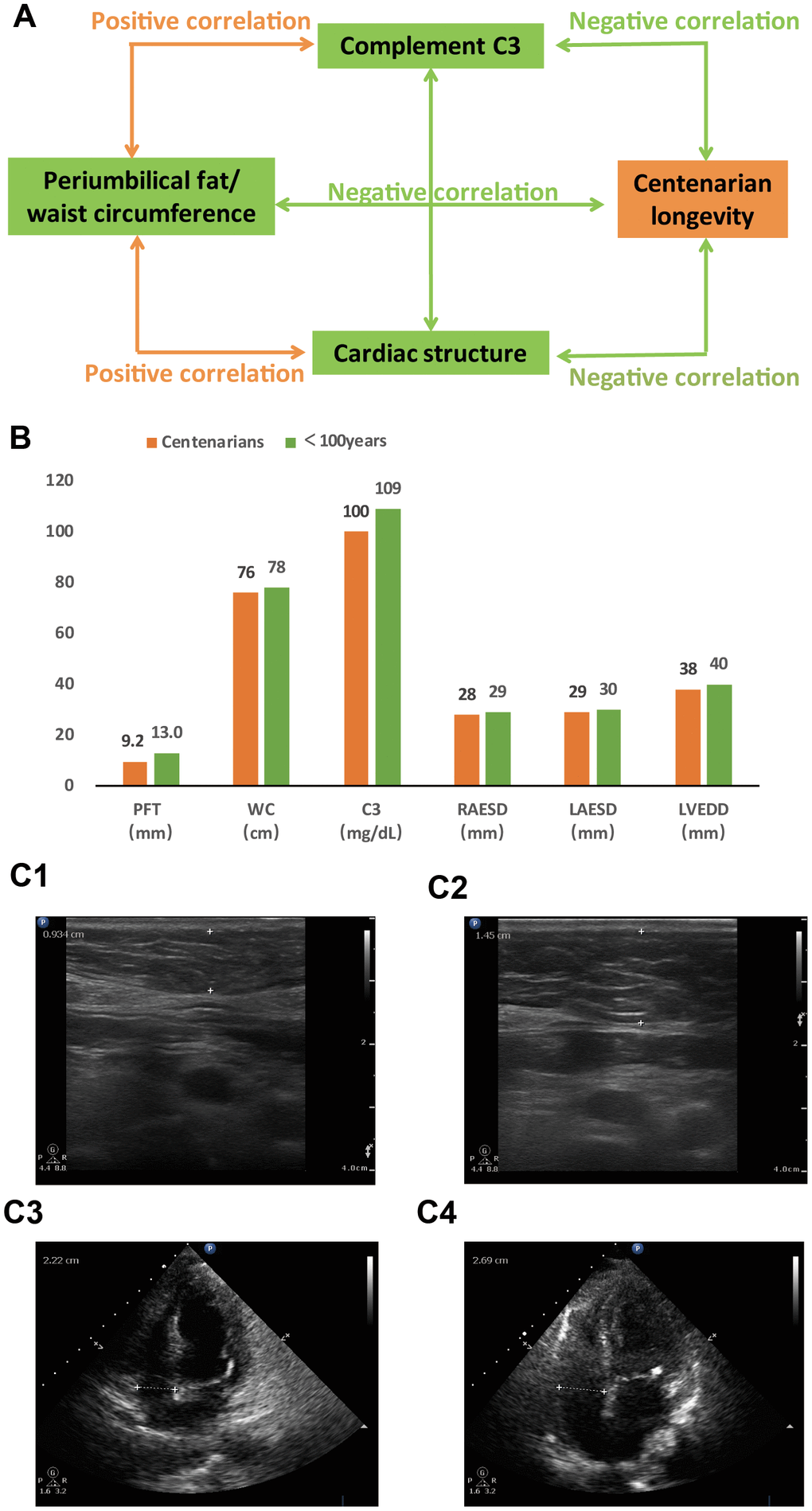 Associations of abdominal fat and obesity, antibody and complement systems, and cardiac structure and function with centenarians

As shown in Table 3, complement C3 level, RVEDD, PAD, LAESD, LVEDD, IVST, and AOD were all positively associated with both PFT and WC (P<0.05 for all variables). IgM and RAESD were inversely and positively associated, respectively, with WC (P<0.05) but not PFT (P>0.05). In contrast, no association with either PFT or WC was detected for complement C4 level, IgA level, IgG level, IgE level, immunoglobulin kappa level, immunoglobulin lambda level, and LVEF (P>0.05 for all variables).

Table 3. Associations of abdominal fat and obesity with antibody and complement systems and cardiac structure and function in linear regression analyses.

Associations between antibody and complement systems and cardiac structure and function

Table 4. Associations of antibody and complement systems with cardiac structure and function in linear regression analyses.

We have witnessed over the last decades an alarming increase in abdominal obesity in virtually every country, irrespective of economic status and cultural background [1–4]. Our previous study indicated that abdominal obesity is associated with both arterial stiffness and impaired hemodynamics in Chinese adults [20]. Since abdominal obesity triggers chronic inflammation of adipose tissue and compromises immune function, we speculated that periumbilical fat may adversely influence longevity by altering the expression or the activity of the antibody-complement system. Although a few studies indicated an association between periumbilical fat and changes in antibody and complement profiles in Western populations [10, 11], it has not yet been determined whether such association impacts longevity, in either Western or Asian populations. The current study demonstrated that Chinese centenarians had less periumbilical fat and a weaker complement system compared with non-centenarian oldest-old population. Moreover, periumbilical fat was negatively associated with longevity mediated by complement C3 in the study’s total oldest-old population. These data indicate that abdominal obesity is an obstacle to successful aging and longevity in China.

Excess periumbilical fat can trigger innate immunity by producing cytokines that stimulate hepatic production of complement C3, an acute phase protein [21, 22]. Complement C3 is also synthesized by activated adipocytes and macrophages and functions as both a cytokine and an adipokine [23]. Complement C3 and other adipokines may promote insulin resistance (IR) by increasing phosphorylation and proteosomal degradation of insulin receptor substrates or by disturbing insulin receptor-substrate interaction [24]. As the main degradation product and active fragment of C3, acylation stimulating protein (ASP, C3a desArg) has insulin-like properties and favors lipid synthesis in adipocytes [25]. In the same way that IR determines increased insulin secretion, an increase in ASP precursor (C3) levels may be triggered by ASP resistance [26]. Since ASP is a potent stimulator of lipogenesis in adipocytes, increased complement C3 levels have the potential to disturb lipid metabolism and aggravate abdominal obesity [27]. Therefore, periumbilical fat may be partly responsible for increased mortality rate and reduced life expectancy mediated by complement C3 [28].

The effects of immune activation on cardiac structure are time-dependent. After an acute injury event, like myocardial infarction, the innate immune system is activated as a prerequisite for adequate healing [34]. However, long-term innate immune activation is detrimental, resulting in adverse cardiac remodeling and structural and functional compromise of the organ [35]. C3 seems to be not only a good indicator of overall complement activation but may also be of pathophysiological relevance in the cardiovascular system. Experimental evidence from animal studies suggests that complement activation is mechanistically involved in adverse cardiac healing and remodeling [36]. For instance, it was shown that elevated C3 levels lead to abnormal left ventricular structure and contractile failure in isolated guinea pig hearts [37]. C3 is an effector protein that can efficiently attract inflammatory cells and directly destroy cells by the complement membrane attack complex. To our knowledge, this is the first study detecting an inverse association between complement C3 and cardiac structure in Chinese oldest-old population, including centenarians.

Based on CHCCS data, the current study demonstrated a complex association network between periumbilical fat and longevity mediated by complement C3 and cardiac structure in Chinese oldest-old population, including centenarians. By highlighting the associations of both complement C3 and cardiac structure with centenarian status, our study suggests that preventing abdominal obesity represents a key strategy to promote successful aging. Nevertheless, molecular studies are required to explore the specific mechanisms underlying the associations identified in the current study.

The population-based CHCCS was carried out in 18 cities and counties of Hainan Province, China. It started in July 2014 and ended in December 2016, and its cohort profile has been described previously [38]. There were 910 oldest-old participants (at least 80 years of age) identified from the National Civil Registry from Hainan Civil Affairs Bureau. Age was ascertained from national identification cards. The current study was carried out after approval of the Ethics Committee of Hainan Hospital of Chinese People’s Liberation Army General Hospital (Sanya, Hainan; Number: 301hn11201601). All participants provided written informed consent prior to the start of the study.

Based on a standardized protocol, face interviews, physical examinations, and blood analyses were administered by a well-trained research team from the Chinese People’s Liberation Army General Hospital using a home-visiting model. This interdisciplinary research team included internists, geriatricians, cardiologists, endocrinologists, nephrologists, and nurses. Based on the recommendations of the World Health Organization, waist circumference (WC) was measured in standing subjects using a flexible tape, midway between the lowest rib and the iliac crest. Blood pressure was measured on the participants’ right arms with a calibrated desktop sphygmomanometer (Yuwell medical equipment and supply Co., Ltd., Jiangsu, China). Appropriate cuff sizes were determined based on arm circumference. Participants sat in a chair for five minutes with their feet on the floor and the right arm supported at heart level. Systolic blood pressure (SBP) and diastolic blood pressure (DBP) were recorded at the first and fifth Korotkoff sounds, respectively, and reported as the average of two separate measurements at an interval of more than one minute.

SF, YY and YZ participated in the study design, data analysis and manuscript draft. SW, JD and FL helped with data acquirement and interpretation. JD, FL and YZ helped with manuscript revision. All authors read and approved the final manuscript.

We are grateful to all the staff of the CHCCS for their continued cooperation and field work contributions.