Copyright: © 2020 Wu et al. This is an open access article distributed under the terms of the Creative Commons Attribution License (CC BY 3.0), which permits unrestricted use, distribution, and reproduction in any medium, provided the original author and source are credited.

β2-Microglobulin (β2M) is the light chain of the class I major histocompatibility complex (MHC I) protein that plays an important role in innate and adaptive immunity, and is involved in the pathogenesis of respiratory diseases [1, 2]. Some studies have suggested that β2M may function as an inflammatory cytokine, aging-promoting factor, and fibrosis-related factor [3–8]. In addition, β2M is involved in the development of fibrosis in kidney, heart, and liver [9–12]. For example, under pressure overload, β2M promotes myocardial fibrosis and activation of myocardial fibroblasts [13]. Furthermore, β2M plasma levels are increased in patients with chronic hepatitis B cirrhosis [14]. These studies indicate that β2M may play a similar role in other organs, but its role in the development and progression of pulmonary fibrosis is not clear. Pulmonary fibrosis is a pathological change characterized by chronic nonspecific inflammation of pulmonary interstitial and large amounts of collagen deposition. In clinical practice, it is assessed by chest computed tomography (CT) and pulmonary diffusing capacity (DLCO) [15, 16]. Chronic obstructive pulmonary disease (COPD) is a complicated pulmonary and systemic inflammatory disease. Its pathogenesis involves pro-inflammatory cells and mediators that may lead to alveolar wall destruction and epithelial-mesenchymal transition (EMT), i.e. emphysema and fibrosis [17–20]. A recent study has shown that COPD patients with emphysema have increased β2M levels in plasma and lungs, suggesting a potential involvement of lung macrophages [21]. Significantly, patients with moderate and severe COPD often have a decreased diffusion capacity and pulmonary fibrosis that might be mediated by an inflammatory factor, such as β2M. In this study, we tested the hypothesis that β2M promotes lung fibrosis in COPD patients, and that it may serve as a novel biomarker of pulmonary fibrosis development in COPD patients.

The COPD patients were divided into four groups according to their DLCO values. The β2M levels gradually increased from DLCO I group to DLCO IV group (Table 2). Since there might be a β2M cut-off point, the COPD patients were divided into two groups – a “better DLCO group” (DLCO I and DLCO II) and a “worse DLCO group” (DLCO III and DLCO IV). Using Mann-Whitney U test, we found that the baseline characteristics were unmatched. The serum β2M values were 2.10±1.22 mg/L in the better DLCO group, and 2.24±0.89 mg/L in the worse DLCO group (Table 3). Using propensity score matching (PSM) to match the baseline, the β2M differences between the two groups were still significant (Table 3).

In secondary analysis using the differences in β2M levels in the two DLCO groups, a cut-off point was set as 2.20 mg/L. Patients’ data were divided into a higher β2M group (serum β2M ≥2.20 mg/L) and a lower β2M group (serum β2M <2.20 mg/L). There were differences in age, CRP levels, and DLCO values between the two groups. COPD patients with emphysema represented less than 50% cases. Emphysema and RV/TLC % showed no differences between the two groups (Table 4). 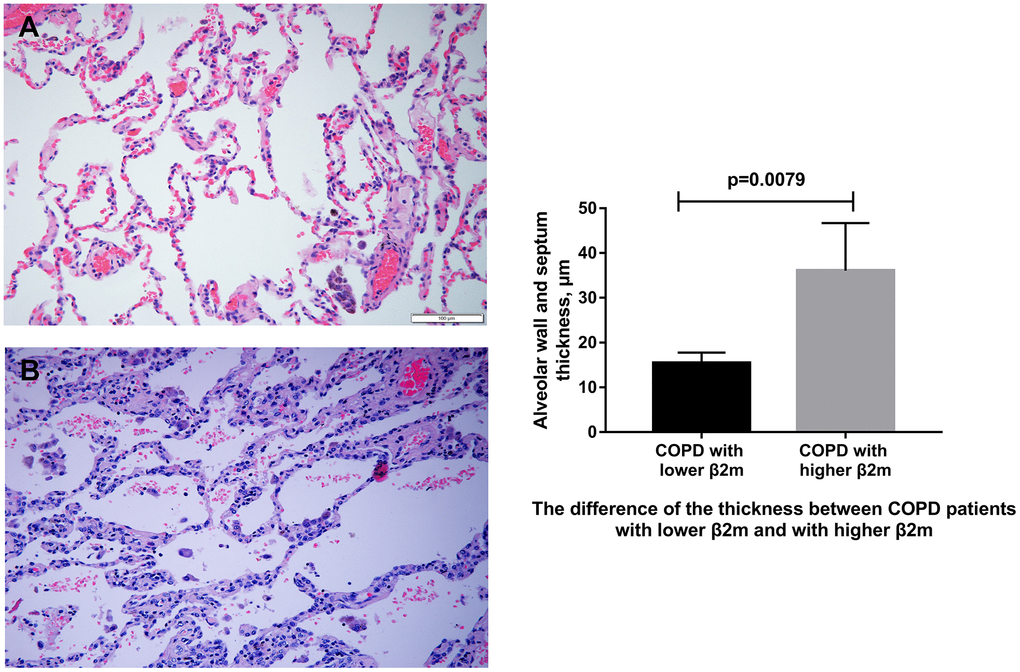 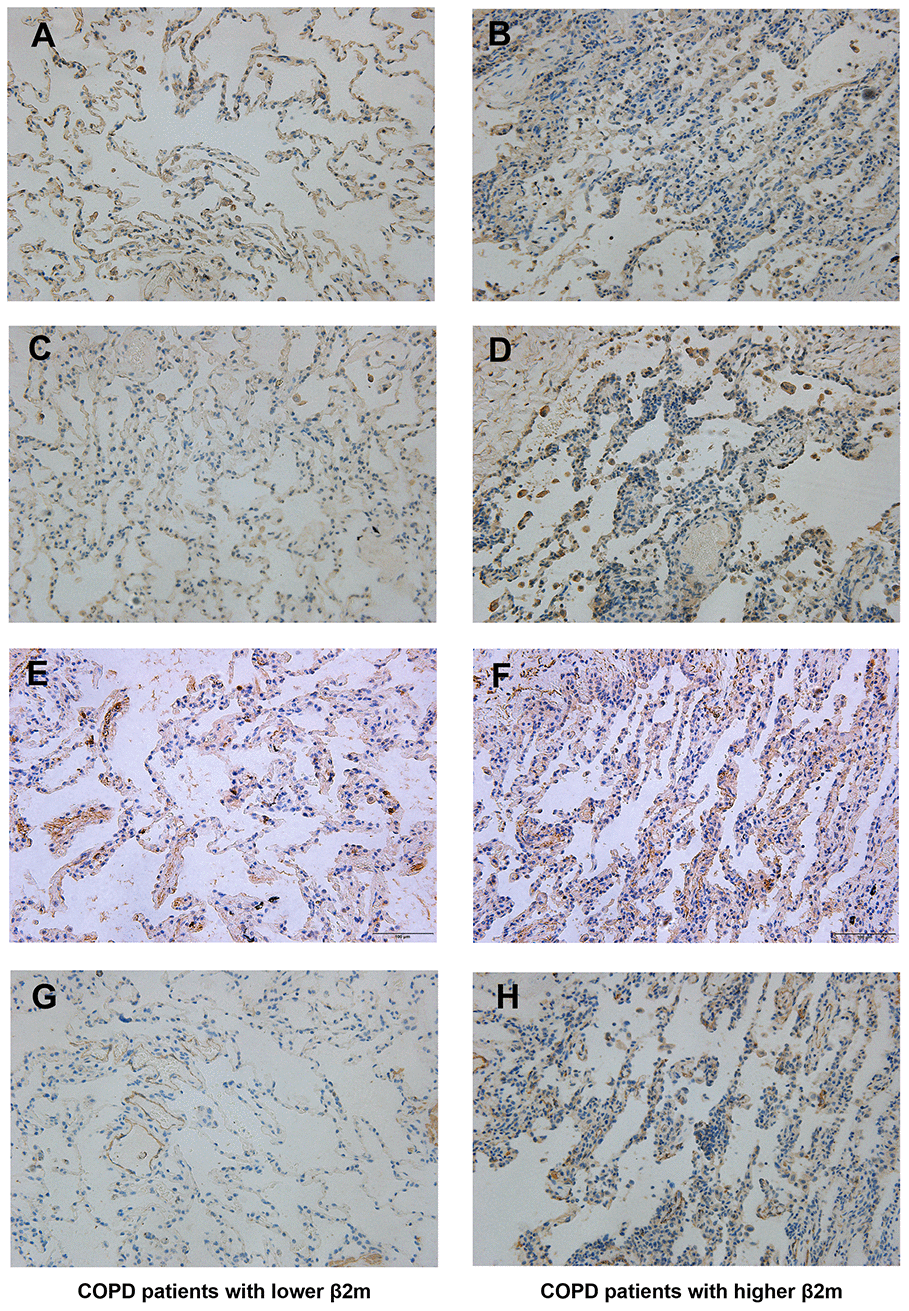 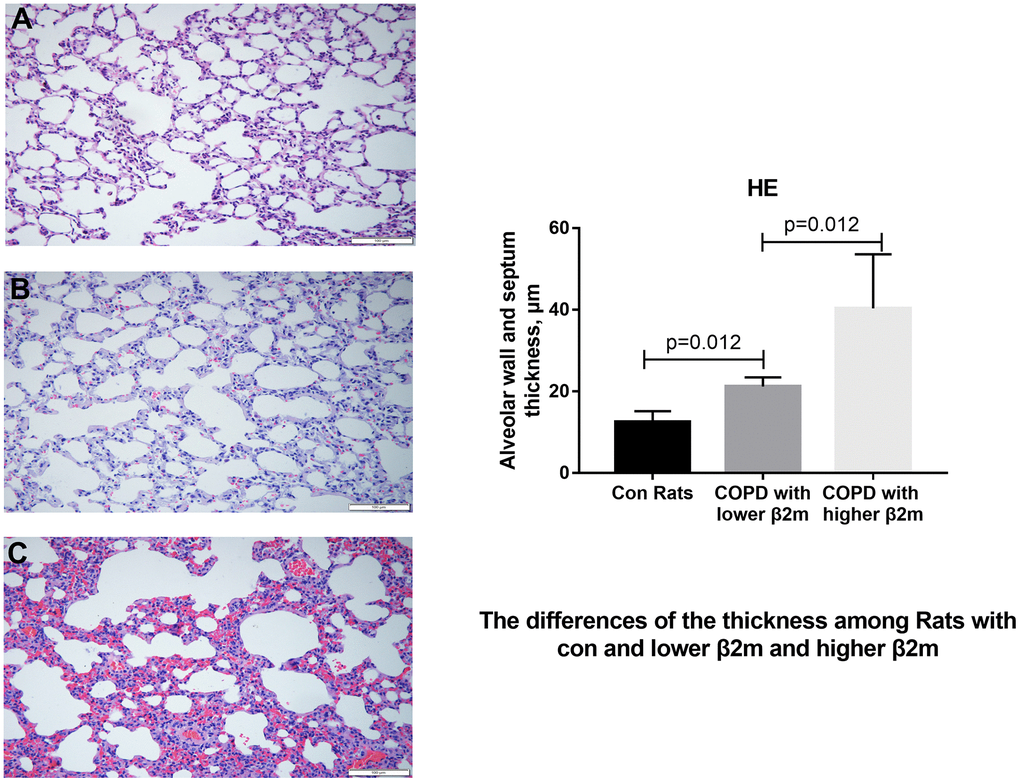 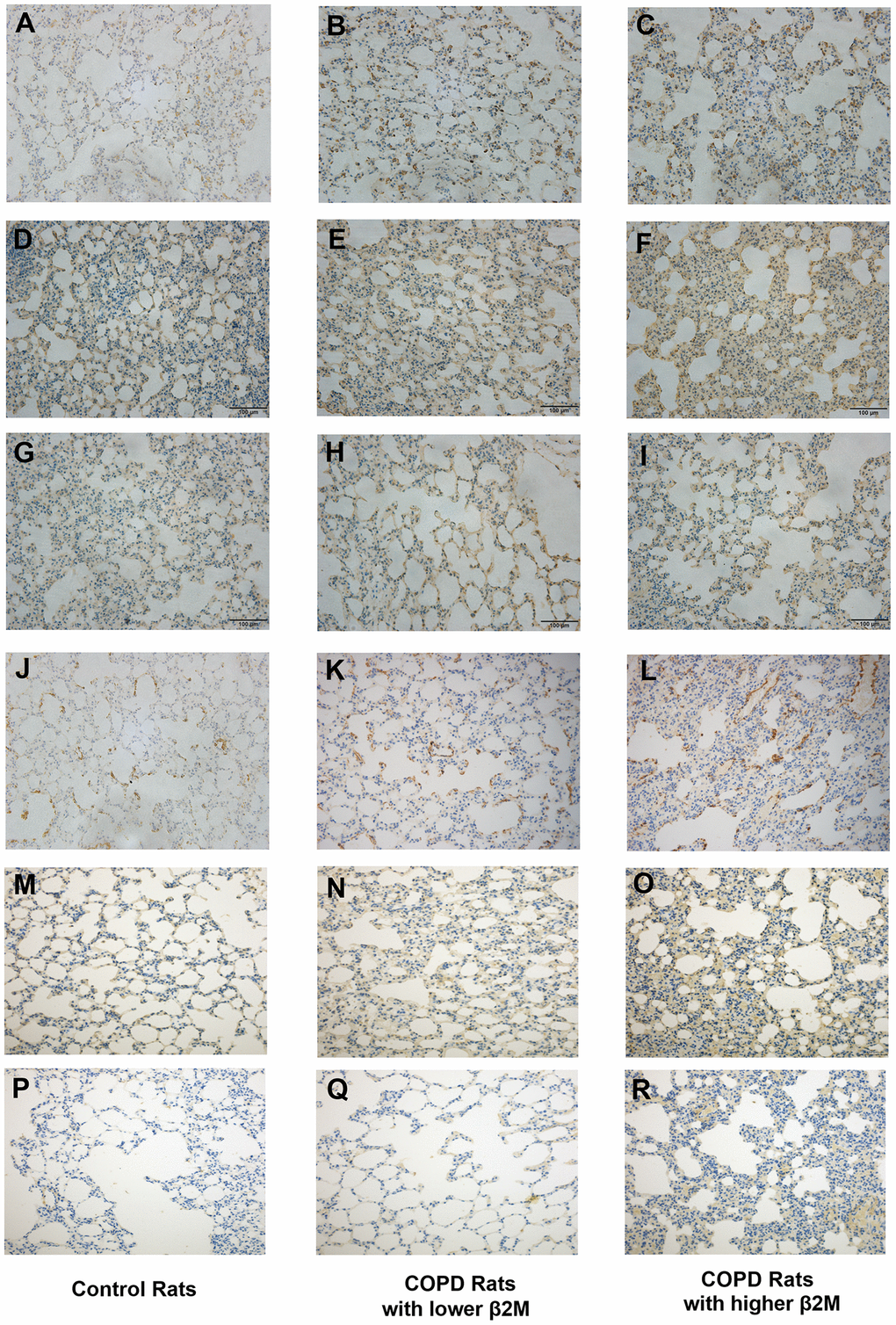 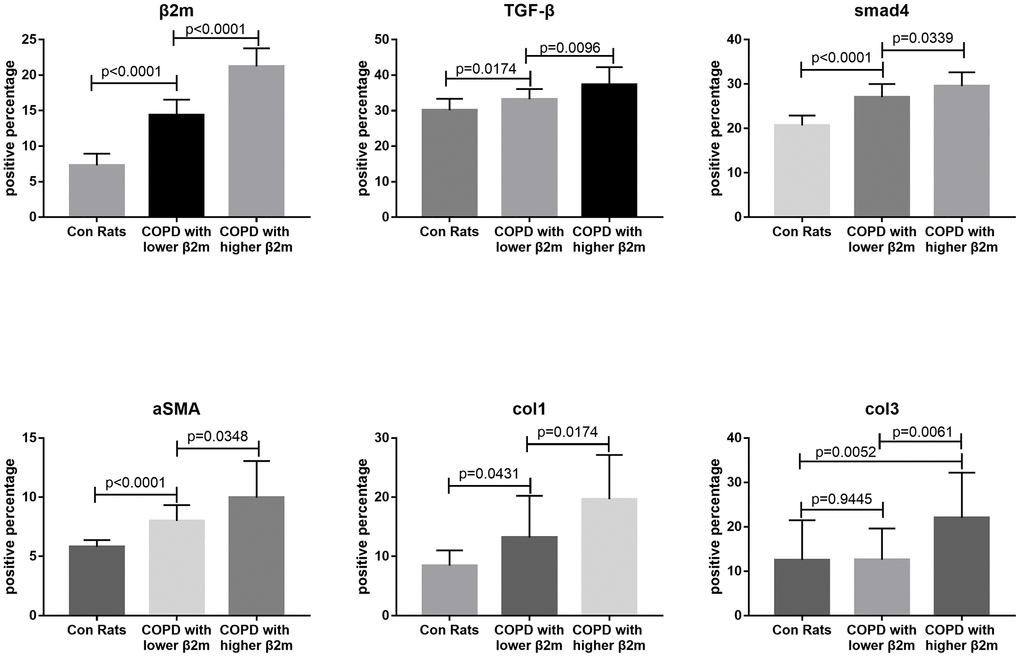 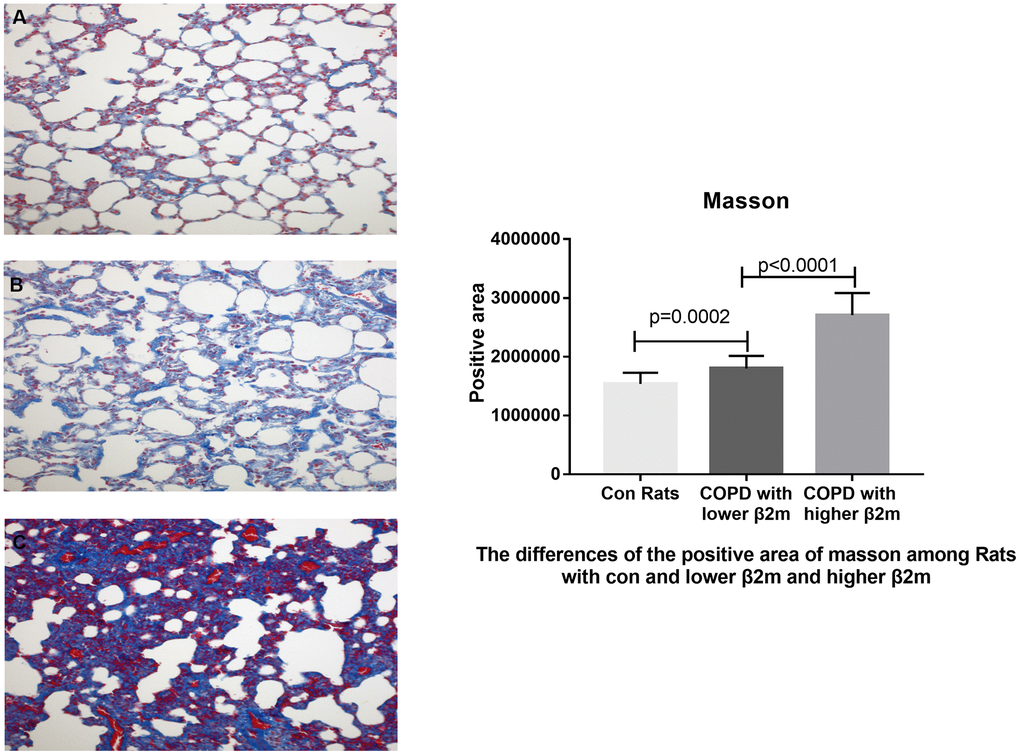 Due to β2M structural characteristics, this amyloid protein can be distributed by blood to all parts of the body, deposit in various tissues and organs, and cause varying degrees of destruction [22]. β2M has been used as a biomarker of fibrosis progression in several organs, including kidney, heart, and liver [6, 7, 9, 12]. However, its role in the lungs has been insufficiently studied. COPD is a complicated pulmonary and systematic disease whose mechanisms involve inflammation, autophagy, aging, and EMT/fibrosis [23]. Moderate and severe COPD patients often have a lung diffusion impairment that is characterized by alveolar epithelial cells EMT, alveolar wall/septal thickening, and alveoli capillary membrane damage detected by pulmonary function test (DLCO and/or DLCO/VA) [24–30]. A recent study has indicated that β2M expression is increased in alveolar epithelial cells, suggesting that β2M might be involved in COPD progression [21]. In this retrospective study, we tested the hypothesis that increased β2M serum and lung levels lead to diffusion dysfunction and pulmonary fibrosis development (DLCO decreasing, alveolar-related EMT, lung tissue fibrosis) in COPD patients.

To our knowledge, our study is the first to demonstrate that COPD patients with decreased DLCO values have increased serum β2M levels. Analysis of clinical data indicated that increased serum β2M is a harmful factor for DLCO in COPD patients, while BMI is a protective one. The observed positive effect of BMI on DLCO is in line with our previous study [31]. In addition, our results showed that increased serum and lung levels of β2M correlated with increased alveolar wall/septal thickening (fibrosis changes) in COPD patients. The TGF-β/Smad pathway is a classical EMT mechanism, and a-SMA, col1, and col3 levels are reliable indicators of EMT/fibrosis progression [18, 32–35]. We investigated the mechanisms that contribute to EMT and fibrosis progression in COPD, and hypothesized that high β2M expression could stimulate TGF-β1 expression, resulting in increased Smad4 and a-SMA levels and collagen expression. Analysis of clinical samples demonstrated that COPD patients with increased serum and lung β2M levels had increased expression of TGF-β1, Smad4, and a-SMA, and increased alveolar wall/septal thickness, resulting in lower DLCO values and fibrosis changes. Animal experiments showed alveolar wall/septal thickening, and increased levels of β2M, TGF-β1, Smad4, a-SMA, col1, and col3 in a rat COPD model. In addition, COPD rats exhibited a significant Masson staining in lung tissues, suggesting leukocyte-mediated pulmonary inflammatory response and then pulmonary fibrosis development.

Future studies should investigate the specific stimuli and mechanisms that induce the increased β2M expression in the lungs and in serum, and elucidate the potential involvement of lung inflammatory cells. It will be important to determine the mechanisms regulating the β2M expression, its relationship with pulmonary fibrosis, as well as the potential of β2M protein structure to contribute to fibrosis.

In conclusion, our study demonstrates the novel relationship between β2M levels, and EMT and lung fibrosis in COPD patients. Our data show that the increased β2M expression is mediated by the TGF-β1/Smad4/a-SMA pathway, resulting in alveolar epithelial cell EMT, alveolar wall/septal thickening, pulmonary fibrosis, and decreased DLCO values. These findings indicate that serum β2M levels may serve as a new indicator to assess pulmonary diffusion function and pulmonary fibrosis severity in clinical practice, and suggest that β2M may serve as a novel potential intervention target for the treatment of pulmonary fibrosis.

In addition, lung tissue specimens were obtained from 6 COPD patients (3 with higher serum β2M values and 3 with lower serum β2M), who were diagnosed with solitary lung nodule and needed resection. Then specimens were fixed by 10% formalin and embedded with paraffin for hematoxylin-eosin (HE) and immunohistochemical (IHC) staining. All procedures adhered to the Helsinki Declaration. This study was approved by Shandong Provincial Hospital Medical Ethics Committee (Ethical Review of Medical Research on Human Being No. 2016-23; LCYJ: NO. 2019-019).

Adult male Wistar rats weighing above 200 g were used for all experiments. Rats were fed in SPF animal facility (temperature 22±2° C, humidity 55±5%), with normal day and night cycle, and free access to common diet and water. Rats were randomly divided into 2 groups: control (n=6) and COPD/CSE (n=13). All experimental procedures followed the Guidelines of the Institutional Animal Care and Use Committee, Chinese Academy of Sciences.

Rat model of COPD was exposed to cigarette smoke (10/time, Huangshan Brand, China Tobacco Anhui Industrial Co., Ltd.) for 4 times each day in a special device, with more than 3-hour breaks in between. The exposure was performed for 5 days per week, and lasted for 12 weeks before final measurements of lung function. The non-COPD groups were put in the same case with free access to fresh air. After exposure, all rats were fed in the room and had access to fresh air. After lung function was measured and COPD model was established, rats were sacrificed and the lung tissues were obtained. The study was approved by Shandong Provincial Hospital Animal Experiment Ethics Committee (Ethical Review of Animal Experiment No. 2019-001).

The lung tissues were fixed in 4% paraformaldehyde, embedded in paraffin, and cut into 4.5 μm-thick sections. The sections were stained with hematoxylin and eosin (HE). The measurement of distal airspace wall thickness was analyzed by using the Image Pro-Plus. In brief, the slides were observed at 200× magnification. The measurement was performed by drawing lines horizontally across the field of view. Bronchioles were intentionally ignored in the field. The thickness of each septum crossing the given horizontal line was measured perpendicular to its course at that crossing point. Three separate horizontal lines were drawn and analyzed for each field, and the average septal thickness was calculated for each grid. There were three lung specimens per group for analyses of distal airspace wall thickness.

All data were collected from Hospital electronic records and recorded by EpiData CRF (Version 3.1). Statistical analysis was performed by SPSS Version 23.0 (SPSS Inc.; Chicago, Illinois) and figures were made by GraphPad Prism7 (GraphPad, San Diego, CA) and ImageJ (National Institutes of Health, USA). Correlation between β2M and DLCO, DLCO/VA was analyzed by Spearman bivariate analysis. In the primary analysis, parametric data were presented as mean ± standard deviation or mean (range). Non-parametric data were presented as median (interquartile range, IQR). Kruskal-Wallis test was used to compare differences among multi-groups and Mann-Whitney U test was used to compare data between pairs. Propensity score matching (PSM) test was performed between DLCO better and DLCO worse groups to exclude the effect of unmatched baseline. Then logistic regression was used to analyze multivariable parameters. In the secondary analysis, analyzing the cut-off point to divide COPD patients into high β2M groups and normal β2M groups, the differences between β2M groups were analyzed by Mann-Whitney U test. P<0.05 was considered significant for all statistical analyses.

This study adhered to the Helsinki Declaration protocol, and was approved by Shandong Provincial Hospital Medical Ethics Committee (Ethical Review of Medical Research on Human Being No. 2016-23; LCYJ: NO. 2019-019). Animal experiments were approved by Shandong Provincial Hospital Animal Experiment Ethics Committee (Ethical Review of Animal Experiment No. 2019-001).

The authors have declared no conflicts of interest in this work.