Estradiol is significantly associated with prognosis in non-surgical liver cancer patients: from bench to bedside

A total of 12,312 non-surgical liver cancer patients were enrolled in this study. Age, race, sex, grade, tumor TNM stage, marital status, tumor size, and histological type were independent risk factors in liver cancer and were confirmed in the validation cohort. Before menopause, females demonstrated a better mean survival probability than males (39.4±1.4 vs. 32.7±0.8 months, respectively; p<0.001), and continued in post-menopause. The results of differentially expressed genes (DEGs) and KEGG pathway analysis showed that there were significant differences in steroid hormone biosynthesis between male and female liver cancer patients. In vitro experiments revealed that estradiol inhibited the proliferation of hepatocellular cancer cell lines and increased apoptosis, but estrone exerted no effect.

In conclusion, gender differences in prognosis among non-surgical liver cancer patients were confirmed and attributable primarily to estradiol.

Liver cancer is the sixth most common cancer, and the fourth most common cause of cancer-related death reported in CA: A Cancer Journal for Clinicians [1], with an annual incidence of 841,080 patients [1]. It is estimated that about 42,810 individuals will be diagnosed with liver cancer in the United States in 2020, of whom 30,160 will die [2]. In virtually all countries, males exhibit incidence and mortality rates 2 to 3 times higher than women [1, 3]. As such, addressing the high mortality and poor prognosis associated with liver cancer remains an urgent priority.

To reveal the real-world situation, our study focused on factors affecting prognosis in patients with liver cancer who had not undergone surgery and, in addition, we also performed related in vitro experiments. The results revealed a significant difference between males and females in terms of survival among those with liver cancer. The results of in vitro experiments revealed that, although estrone did not have a significant effect on liver cancer cells, estradiol played a central role.

The literature search retrieved 424 unique citations. After screening of titles and abstracts, 87 full-text articles remained for assessment, reporting that females had longer survival than males in different type cancer (pooled HR 0.86 [95% CI: 0.83–0.89]; p < 0.001; I2 = 98%) (Supplementary Figure 1). Finally, 6 studies including 98,010 individuals were reviewed to appraise the effect of gender on the OS of liver cancer patients. The forest plot of gender for the efficacy in reducing the risk for prognosis in liver cancer patients is shown in Supplementary Figure 2. Among patients with liver cancer, females demonstrated better prognosis than males (pooled HR 0.93 [95% CI: 0.91–0.94]; p < 0.001; I2 = 0%), and homogeneity performed well.

Characteristics of liver cancer patients from the SEER database 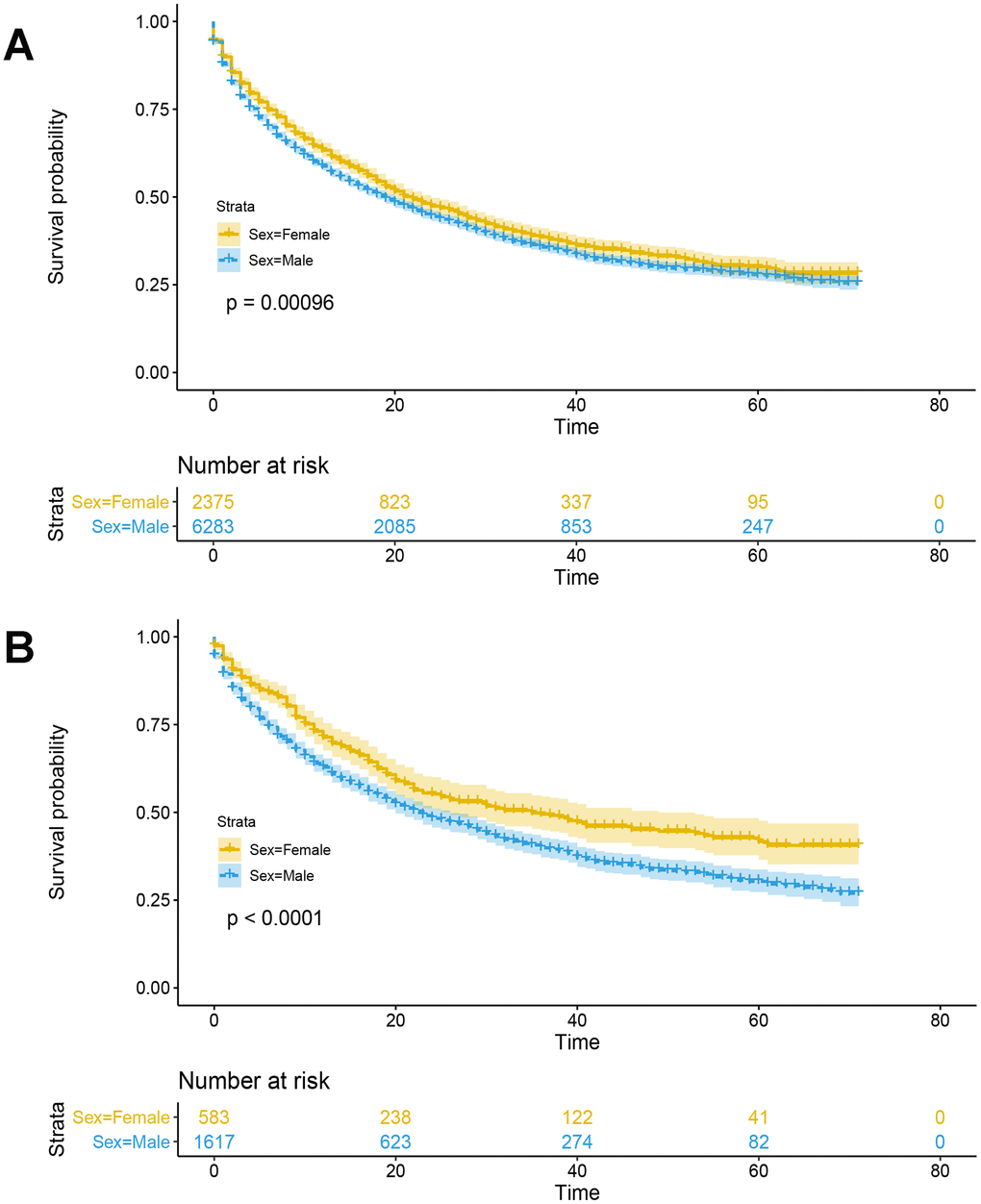 Prognostic nomogram for OS and ROC of the model

Based on independent prognostic factors identified in the multivariate Cox regression analysis, a prognostic nomogram was developed for liver cancer patients to predict 3-and 5-year survival probabilities (Figure 2). In primary cohorts, the area under the ROC curves (AUROCs) of the model was 0.730 (p < 0.001) (Figure 3A), the consistency index of the model was 71.56 (95%CI: 71.17-71.96), and the internal calibration curve for the probability of survival at 3-and 5-years showed a good agreement between the nomogram-predicted probability of OS and actual survival (Figure 3B, 3C). In the validation cohort, AUROCs were 0.734 (p < 0.001) (Figure 3D), the consistency index was 70.74 (95%CI: 70.13-71.35), there was also a well-performed calibration curve for survival prediction (Figure 3E, 3F). Therefore, the nomogram could reliably predict the 3- and 5-year OS probabilities. Furthermore, independent nomograms were developed for patients ≤ 55 and > 55 years of age (Supplementary Figures 3, 4). 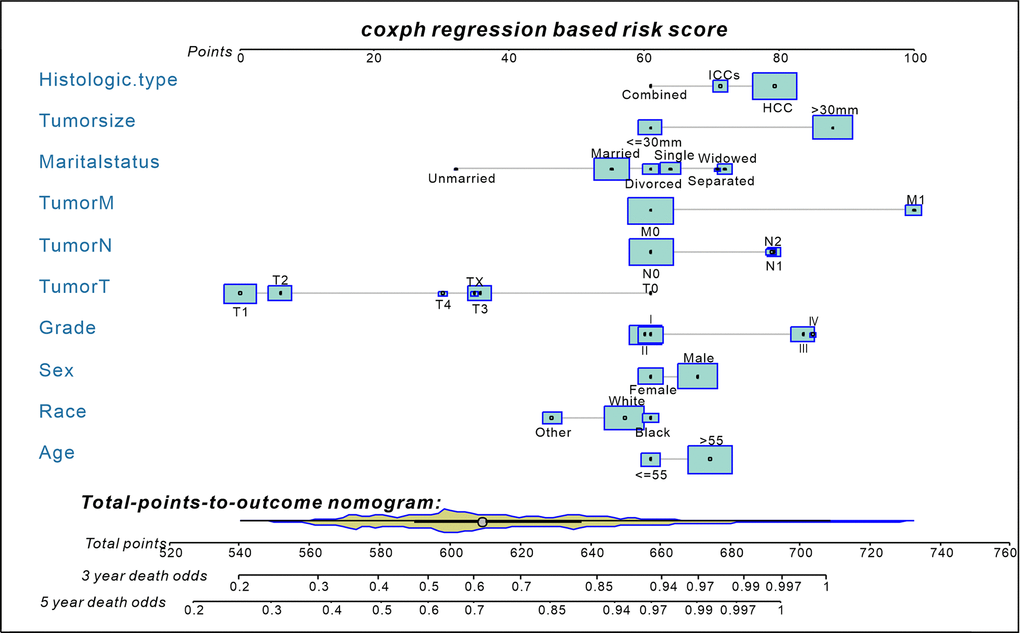 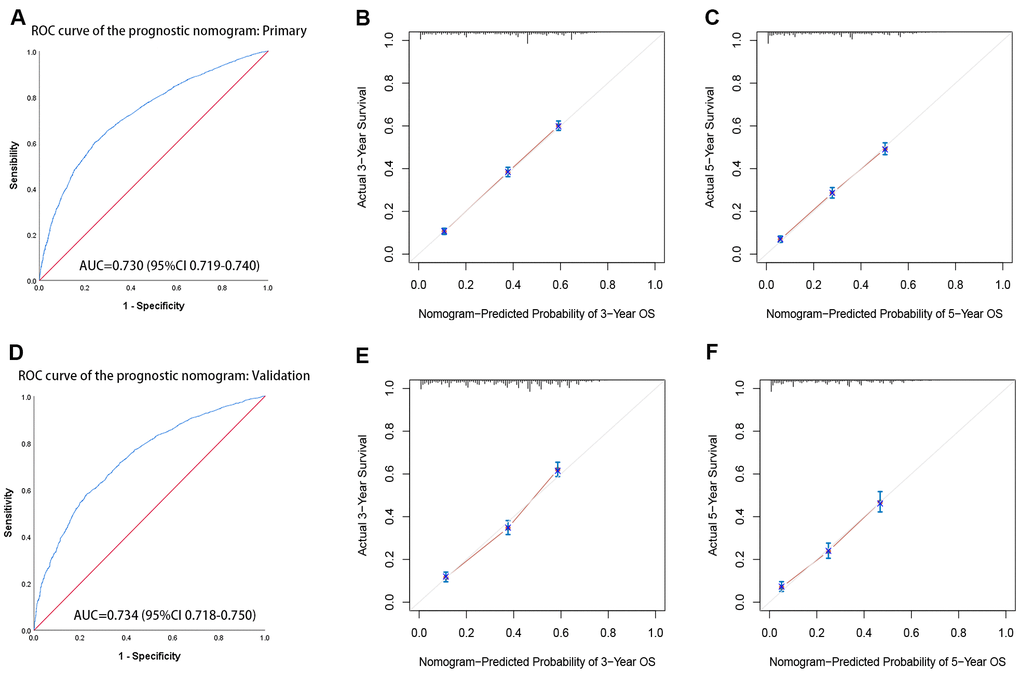 Survival differences according to sex and sex hormones: from bench to bedside

The primary hypothesis, that female liver cancer patients have a better prognosis than males is attributable to different estrogen levels, was investigated. Based on previous studies [5, 14, 15], 55 years of age was defined as a surrogate for menopause. As shown in Figure 1B, before menopause (i.e., ≤ 55 years of age), there was an extreme gap between females and males in survival probability (39.4 ± 1.4 vs. 32.7 ± 0.8 months, respectively; p < 0.001). While this gap will be smaller after menopause (i.e., age > 55 years), the difference between females and males (30.5 ± 0.6 vs. 29.3 ± 0.4 months, respectively; p = 0.022) (Supplementary Figure 5) persisted. For further exploration, we obtained 265 male and 139 female liver cancer patients from the TCGA database, differentially expressed genes (DEGs) and KEGG pathway analysis results showed that there were significant differences in steroid hormone biosynthesis between male and female liver cancer patients (Figure 4). 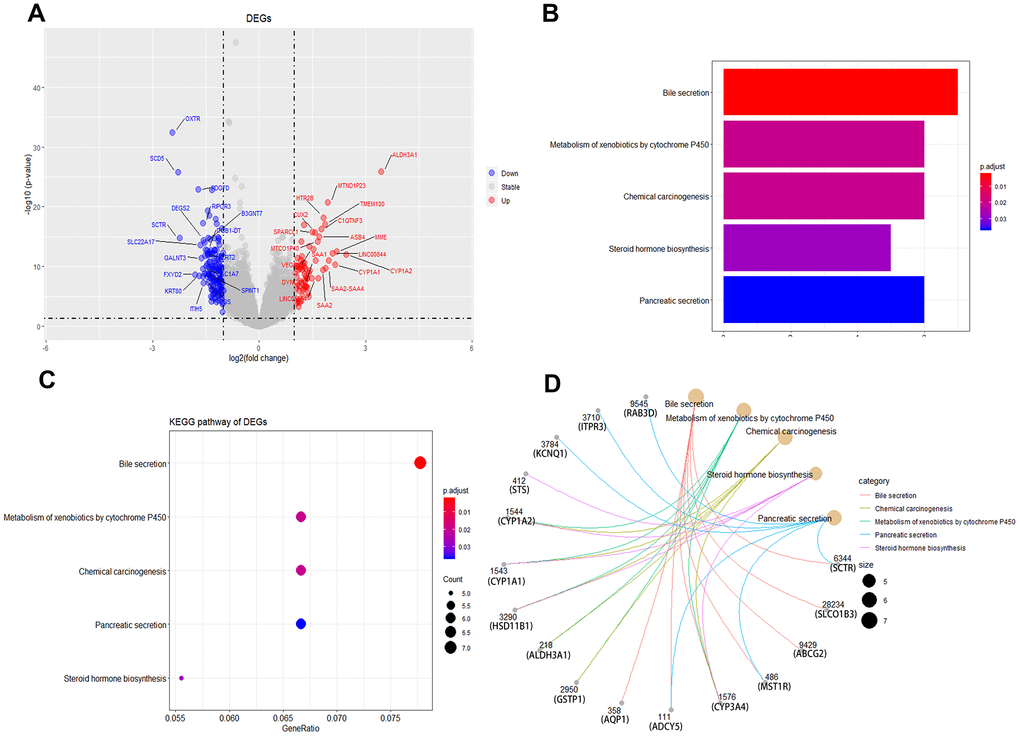 According to a previous study [16], estradiol may be the main source of endogenous estrogen in postmenopausal women. This indicates that gender differences in patient prognosis may be primarily attributable to estrogen in patients with non-surgical liver cancer. To confirm the effect of estrogen on liver cancer, different concentrations of estrone and estradiol were used to stimulate HCC cell lines, including Hep 3B, BEL-7402, and Huh7. The results demonstrated that estradiol inhibited the proliferation of HCC cell lines and increased apoptosis; however, estrone exerted no effect (Figure 5). The most obvious effect was obtained when the concentration of estradiol is 5μmol/L. This result suggests that the difference in prognosis between men and women among liver cancer patients may be mainly attributed to estradiol. 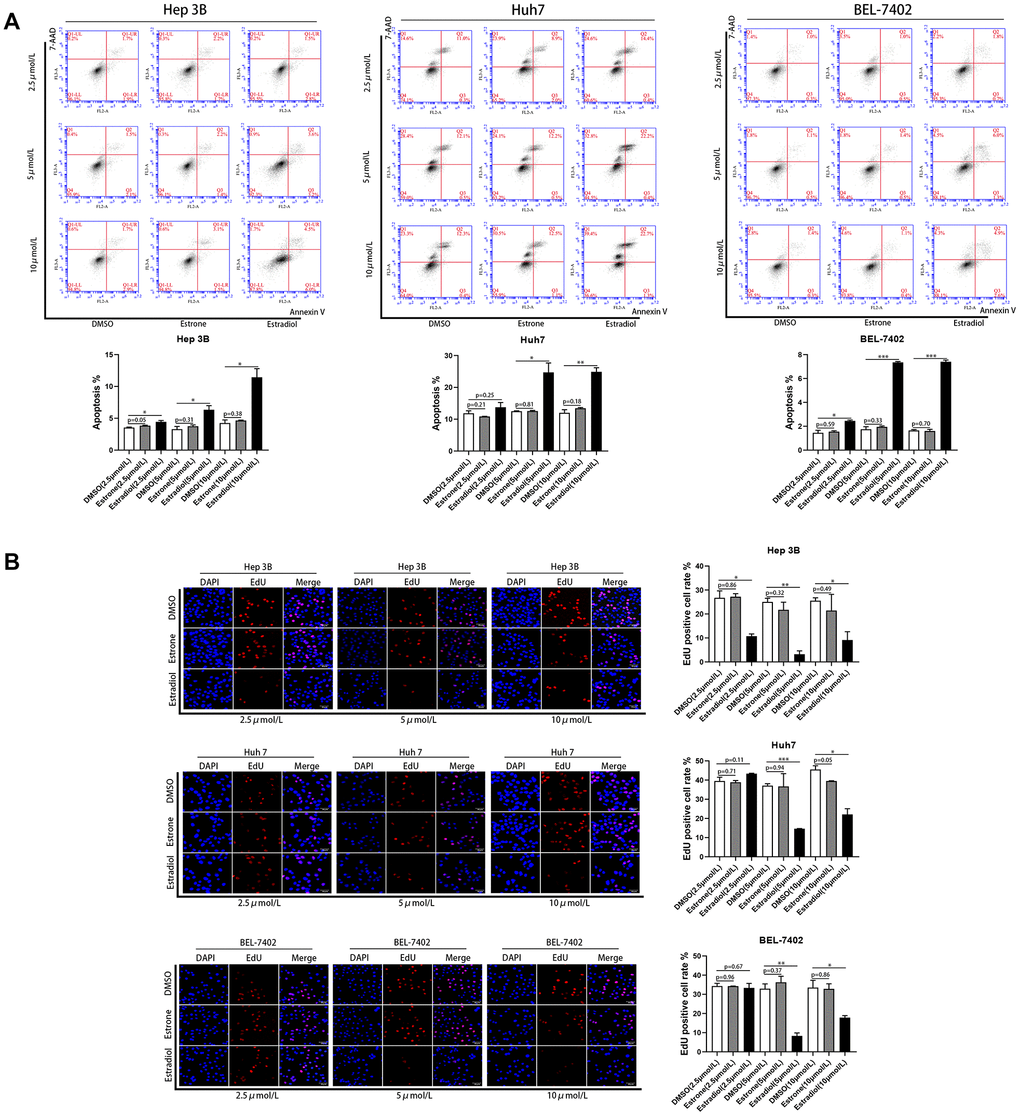 Although hepatic resection or liver transplantation is the optimal treatment for liver cancer [17], most patients with liver cancer are diagnosed at an intermediate-to-advanced stage when surgery is not suitable [18]. The proportion of surgical candidates is 5–10% due to multi-centric tumors, portal hypertension, vascular invasion, and dissemination [17]. Therefore, it is particularly important to design treatment plans for patients with liver cancer who cannot undergo surgery. Previous studies have hypothesized that women will benefit from estrones in liver cancer pathogenesis [11], epidemiological studies show that oophorectomy can increase the risk of liver cancer risk [19]. Interestingly, our study found that the gender differences in the prognosis of liver cancer patients always existed regardless of whether they were pre-menopausal (age ≤ 55 years) or post-menopausal (age > 55 years). Especially before menopause, there was a huge difference in survival between men and women but narrowed after menopause. Previous researches have shown that postmenopausal hormone replacement therapy is a protective factor in liver cancer [20, 21], and consistent with animal studies [20]. It means that as estrogen levels dropped, women’s benefits from hormones decreased and the dropped estrogen levels made the survival difference between men and women narrowed, and the benefits can be rescued by use postmenopausal hormone replacement therapy [20]. It reminds us that gender differences in the prognosis of liver cancer patients may be primarily attributable to estrogen [22].

In this study, meta-analysis revealed that females with liver cancer would live longer than males, which was consistent with the multivariate Cox regression analyses of the SEER database. The SEER database reported that age ≤ 55 years, white race, female sex, clinical grade 1, married status, and tumor size ≤ 30 mm were factors for a good prognosis in non-surgical liver cancer patients. We developed a prognostic nomogram for non-surgical liver cancer patients to predict 3-and 5-year OS rates, the AUROCs for this model was 0.730, and calibration curve performed well. Also, we found an extreme gap between males and females in terms of survival probability before menopause (age ≤ 55 years), and this gap persisted after menopause (age > 55 years). And we found that there was a significant difference in steroid hormone biosynthesis between male and female liver cancer patients. More importantly, we demonstrated that gender difference in the prognosis of liver cancer patients may be attributable to estradiol, but not estrone.

We found that higher TNM stage and clinical-grade were associated with poor survival in liver cancer patients, as reported previously [24]. Tumor size remains an independent prognostic factor for liver cancer, and these results confirmed that patients with small HCC are essentially a heterogeneous group [25]. Among patients with liver cancer, those with white race have a better prognosis, consistent with the study by Zhang et al. [25]. Age, marital status, and histological type were all independent risk factors.

Nomograms have been widely used for cancer prognosis and displayed more accurate than conventional staging systems in the aspect of predicting prognosis in some cancers [26, 27]. Therefore, we conducted a prognostic nomogram for patients who had not undergone surgery. It is worth noting that this model had the most comprehensive index to predict the survival probability of non-surgical liver cancer patients at 3 and 5 years. The nomogram performed well, and its prediction was supported by the AUROCs (0.730 and 0.734 for the primary and validation cohorts, respectively). It was consistent with the observations by Zhang et al. [8], but they had too little data to find more valuable information.

Previous study supposed that estradiol is the main source of endogenous estrogen in postmenopausal women [16]. Whether the gender differences in the prognosis of liver cancer are attributable to estrogen still has not been resolved clearly. Unfortunately, previous studies focused only on the superficial aspects of retrospective research. But in our study, we used meta-analysis, cohort research, in vitro experiments, etc. to confirm our results. We proved that estradiol may, in large part, explain gender differences in the prognosis of liver cancer patients, and demonstrated that estradiol—but not estrone—inhibited the development of liver cancer, from bench to bedside. Because estradiol can inhibit tumor growth and increase tumor cell apoptosis rate, so as a protective factor, women may benefit from estradiol [28] and got longer survival than men. Our research provides the possibility of using hormone replacement therapy for liver cancer patients, which is supported by Zhong et al. [10] and McGlynn KA et. al [29].

In conclusion, we determined that gender differences in prognosis of liver cancer patients and the effect of sex hormones on the disease by used meta-analysis, retrospective analysis, and in vitro experiments. More importantly, we demonstrated that estradiol inhibited the proliferation of HCC cell lines and increased apoptosis, but estrone exerted no effect. This may explain why there was a gender difference in the prognosis of liver cancer patients. Future investigations should aim to elucidate the mechanisms of action of estradiol in those with liver cancer.

A literature search of the PubMed database, performed using a combination of the keywords ((gender OR sex) AND “Marital status” AND race AND (cancer OR tumor)), retrieved a total of 424 relevant studies. After reviewing abstracts, 337 articles were excluded, and 87 tumor-related articles were used to verify the relationship between gender and tumor prognosis. Among these, 7 studies investigating liver cancer were retained, and one addressed liver transplantation. Ultimately, 6 studies were used to identify and appraise the effect of sex on overall survival (OS) in patients with liver cancer.

Meta-analysis was performed using the package meta in R. The 95% confidence intervals (CI) reported in the available articles were extracted and pooled after calculating TE, seTE, and log transformed. Study heterogeneity was assessed using the I2 statistic [32]. Survival curves for both the genders were plotted using the Kaplan-Meier method by R. Univariate and multivariate Cox regression analyses were used to estimate independent risk factors in non-surgical liver cancer patients on OS and to generate hazard ratios (HR) and corresponding 95% CI in SPSS version 25. All results were verified in the validation cohort. A prognostic nomogram was developed based on multivariate Cox regression analyses. The receiver operating characteristic (ROC) curve was plotted using SPSS version 25. All statistical tests were two-tailed and differences with p < 0.05 were considered as statistically significant.