Copyright: © 2021 Sun et al. This is an open access article distributed under the terms of the Creative Commons Attribution License (CC BY 3.0), which permits unrestricted use, distribution, and reproduction in any medium, provided the original author and source are credited.

Several reports suggest that hydrogen sulfide (H2S) exerts multiple biological and physiological effects on the pathogenesis of traumatic brain injury (TBI). However, the exact molecular mechanism involved in this effect is not yet fully known. In this study, we found that H2S alleviated TBI-induced motor and spatial memory deficits, brain pathology, and brain edema. Moreover, sodium hydrosulfide (NaHS), an H2S donor, treatment markedly increased the expression of Bcl-2, while inhibited the expression of Bax and Cleaved caspase-3 in TBI-challenged rats. Tunnel staining also demonstrated these results. Treatment with NaHS significantly reduced the glutamate and glutaminase 2 (GLS-2) protein levels, and glutamate-mediated oxidative stress in TBI-challenged rats. Furthermore, we demonstrated that H2S treatment inhibited glutamate-mediated oxidative stress through the p53/GLS-2 pathway. Therefore, our results suggested that H2S protects brain injury induced by TBI through modulation of the glutamate-mediated oxidative stress in the p53/GLS-2 pathway-dependent manner.

Traumatic brain injury (TBI), which contributes to subsequent damage of associated neurons, has imposed a significant burden on family and society in the world [1, 2]. Although great improvements have been made in medical intervention, many approaches or neuroprotective agents for TBI failed during clinical trials [3–5].

Glutamate has been reported to play an important role in the excitement of nerve activity during TBI [6, 7]. Garzón et al showed that NeuroEPO protected cortical neurons from glutamate-induced apoptosis via the upregulation of Bcl-2 and inhibit glutamate-induced activation of caspase-3 [8]. Glutathione depletion, perhaps triggered by early glutamate-mediated excitotoxicity, led to late post-repetitive mild TBI loss of parvalbumin-positive interneuron-dependent cortical inhibitory tone [9]. Also, zolpidem prevented glutamate-induced toxicity in differentiated P19 neurons via the PI3K/Akt pathway [10]. Therefore, searching for neuroprotective agents, which can inhibit glutamate-induced toxicity, may be a promising therapeutic strategy for TBI treatment.

As an important gasotransmitter and endogenous neuromodulator, hydrogen sulfide (H2S) has been reported to exert multiple biological and physiological effects on the pathogenesis of numerous diseases, such as stroke, Alzheimer’s disease, and TBI [11–13]. Sodium hydrosulfide (NaHS), an H2S donor, improved spatial memory impairment of rats with TBI [14]. H2S could prevent scratch-induced cellular injury, alteration of mitochondrial membrane potential, intracellular accumulation of reactive oxygen species, and cell death in PC12 cells through modulation of the PI3K/Akt/Nrf2 pathway [15]. Besides, NaHS treatment increased endogenous antioxidant enzymatic activities and decreased oxidative product levels in the brain tissue of TBI-challenged rats [16]. However, the biological role of H2S in regulating glutamate-induced apoptosis and oxidative stress during TBI remains unclear. In the present study, we used the TBI rat model to determine the protective effects of H2S on the motor and spatial memory deficits and brain edema. Furthermore, we explored its potential neuroprotective mechanism through glutamate-induced apoptosis and oxidative stress.

To determine the effect of H2S on TBI-induced motor deficits, a wire-grip test and a rota-rod test were performed. Compared with the sham group, TBI lead to a significant decline in motor performance at 0 to 7 days post-injury. NaHS, an H2S donor, treatment significantly improve the motor function on days 0 to 7 after TBI compared to TBI and TBI+ vehicle groups (Figure 1A, 1B). 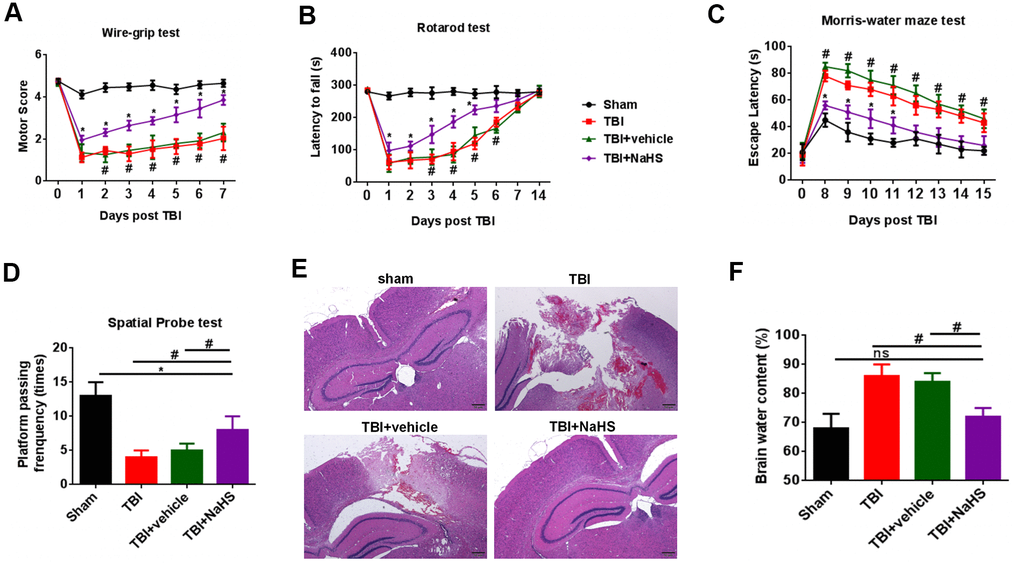 We then performed a Morris water maze test to analyze spatial memory ability on days 8 to 15. Compared with the sham group, rats from TBI and TBI+ vehicle groups showed increased latencies to find the hidden platform. We observed a significant decrease in the latencies in the TBI+ NaHS group (Figure 1C). The data of a spatial probe test also showed that H2S improved the spatial memory ability of TBI rats (Figure 1D).

To determine the effect of H2S on TBI-induced cerebral injury, we analyzed brain pathology and brain edema. As shown in Figure 1E, compared with the sham group on day 7, rats from TBI and TBI+ vehicle groups showed serious pathological changes. Treatment with NaHS significantly improved the pathological changes. In addition, TBI led to a significant increase in the percentage of brain water content compared to the sham group (Figure 1F). Treatment with NaHS markedly reduced the percentage of brain water content. 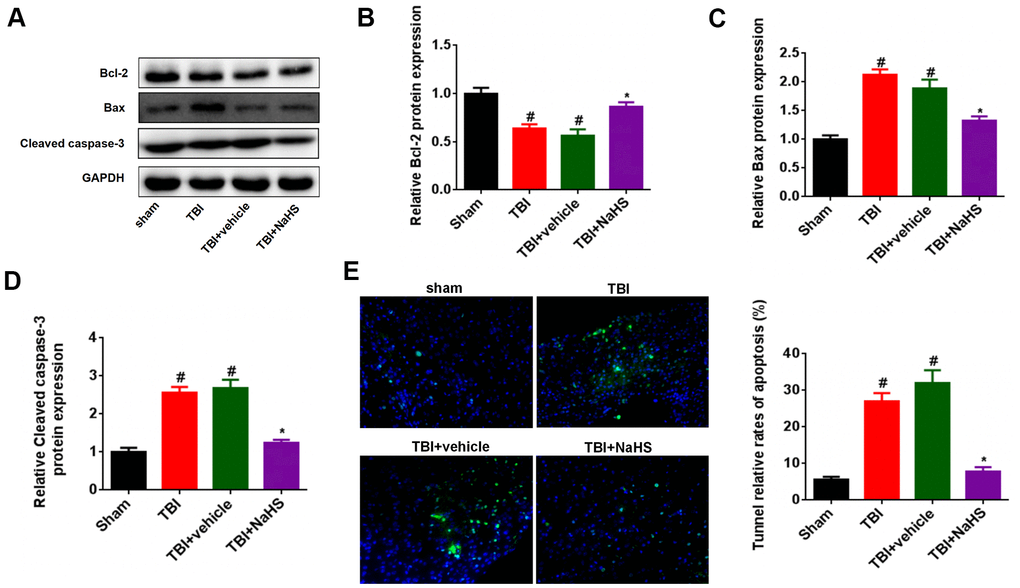 Figure 2. Treatment with H2S inhibited TBI-induced apoptosis. (A) Western blot was performed to analyze the protein level of Bcl-2, Bax, and Cleaved caspase-3 in TBI-challenged rats after treatment with NaHS. (B–D) The band density of Bcl-2 (B), Bax (C), and Cleaved caspase-3 (D) was analyzed using Image J. (E) The apoptosis rate of cerebral cortex in TBI rats was analyzed by Tunnel staining. * P<0.05, vs. TBI and TBI+ vehicle groups. #P<0.05 vs. sham group.

H2S inhibited the levels of glutamate after TBI

We then investigated the effect of H2S on glutamate levels after TBI. As shown in Figure 3A, the glutamate level was significantly increased after TBI. Treatment with NaHS markedly reduced the glutamate level in TBI-challenged rats. Given that the GLS2 level was regulated by glutaminase, we also determined the effect of H2S on GLS2 expression after TBI. The protein expression of GLS2 in TBI-challenged rats was higher than that in the sham group rats. Moreover, the GLS2 protein level was significantly decreased in the TBI+ NaHS group compared to TBI and TBI+ vehicle groups (Figure 3B, 3C). 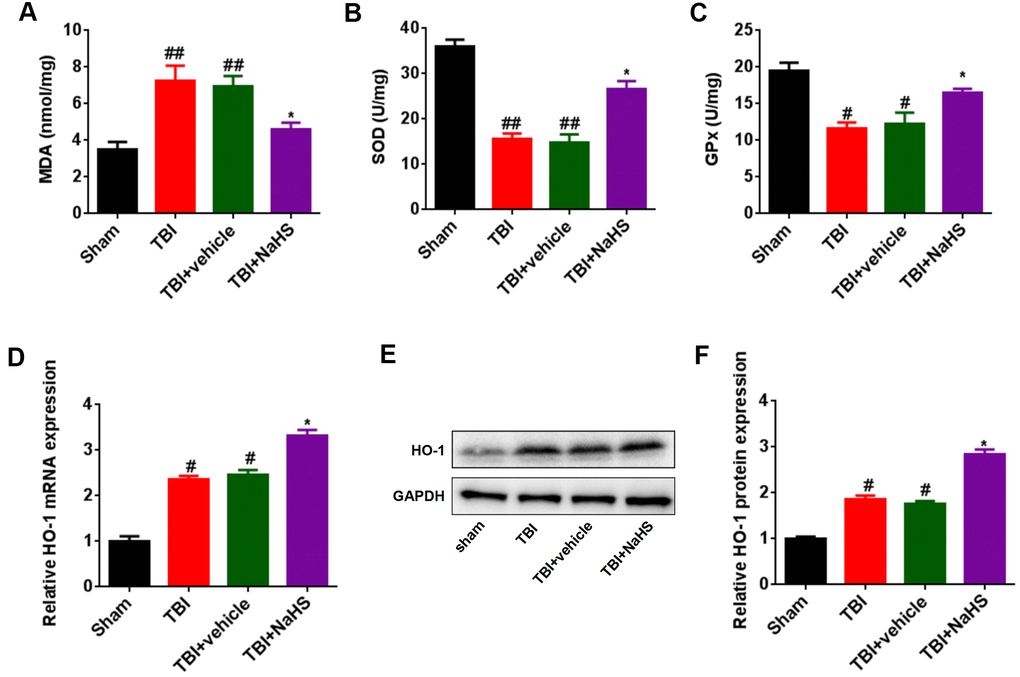 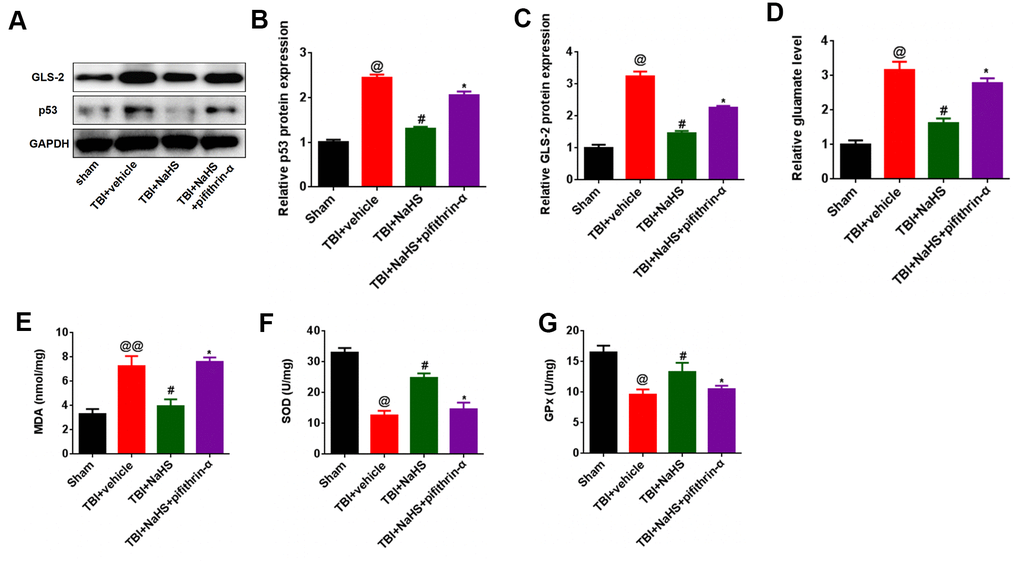 Previous studies have shown the neuroprotective roles of H2S on TBI [13, 15]. Mingyang et al. reported that H2S pretreatment had reduced brain edema, improved motor performance, and ameliorated performance in the Morris water maze test after TBI [17]. Karimi et al. showed that NaHS has a neuroprotective effect on TBI-induced memory impairment in rats [14]. Also, NaHS treatment ameliorated brain injuries, characterized by an increase of blood-brain barrier permeability, brain edema, and lesion volume, as well as neurologic dysfunction in TBI-challenged rats [16]. In this study, our data also demonstrated that H2S alleviated TBI-induced motor and spatial memory deficits, brain pathology, and brain edema. Moreover, we also found that NaHS treatment markedly increased the expression of Bcl-2, while inhibited the expression of Bax and Cleaved caspase-3 in TBI-challenged rats. Tunnel staining also demonstrated this results. These results were similar to the results of previous studies [17, 18], and suggested that H2S played the protective effect against TBI by regulating apoptosis.

In addition, we investigated the molecular mechanisms that H2S regulated the glutamate-mediated oxidative stress. A previous study showed that the p53 pathway was involved in the progression of TBI. Hong et al. reported that JNK-mediated p53 expression could regulate neuron autophagy following TBI in rats [25]. The p53 inactivator pifithrin-α oxygen analogue could inhibit glutamate-induced excitotoxicity and improve histological and functional outcomes after experimental TBI [26]. Since GLS-2 was a p53 target gene [27], we hypothesized that the inhibited glutamate and oxidative stress effect was induced by the p53/GLS-2 signaling pathways. Our results showed that pifithrin-α treatment reversed the inhibitory effect of H2S on p53, GLS-2, and glutamate expression in TBI-challenged rats. Moreover, pifithrin-α treatment abolished the effect of H2S on MDA content, SOD activities, and GPx activities in TBI-challenged rats. These results suggested that H2S inhibited glutamate-mediated oxidative stress via the p53/GLS-2 pathway.

Sprague-Dawley (SD) rats, weighing 250-300 g, were obtained from the Animal Center of the Hebei Medical University (Shijiazhuang, China). All mouse experiments were approved by the Ethics Committee of The Second Hospital of Hebei Medical University. The mouse TBI model was established as previously described [28]. Briefly, the rats were anesthetized with 4% chloral hydrate. The following surgery was performed under aseptic conditions and mounted in a stereotaxic system (David Kopf Instruments, Tujunga, California). A midline incision was made to expose the skull, and the bone flap was carefully removed by a manual trephine (Roboz Surgical Instrument Co., Gaithersburg, MD). We then used a weight-drop device to perform the TBI in the left part of the brain as described previously [29, 30]. For the sham operation group, rats underwent the same procedure as TBI rats except for the impact.

We also used a rota-rod test to evaluate the motor function as described previously [32]. Before surgery, all rats were pre-trained for balancing on an automated rota-rod (Ugo Basile, Comerio, Italy) at a constant speed of 40 rpm. The average latency to fall from the rod was recorded, and the maximum cutoff time was 180 s.

We performed a Morris water maze test to evaluate spatial learning and memory performance as described previously [28, 33]. Briefly, the water was added into an experimental apparatus, and colored by white non-toxic food pigment. A clear plexiglass goal platform was placed 0.5 cm under the water surface. We allowed rats to find the submerged platform at a maximum of 90 s on days 8 to 15, and remain on the platform for an additional 10 s if the mouse reached the submerged platform. Then, we used a video/compute system to recorded and analyzed the escape latency that a mouse reached the visible platform. For the spatial probe test, we removed the submerged platform and allowed rats to explore the pool within 90 s on day 16. A video tracking system was used to monitor the frequency of passing through the target quadrant.

Pathological analysis of the brain tissues

For H&E staining, the 5 μm slides from brains of rats in sham, TBI, TBI+vehicle, or TBI+NaHS group were stained by H&E staining kit (Solarbio, China) according to the manufacturer’s instructions. Briefly, the slides were deparaffinized using xylene and ethanol. After permeabilized, the slides were stained with hematoxylin and eosin. Finally, imajes were obtained from an optical microscope.

A wet-dry weight method was used to measure the brain water content as described previously [28, 33]. Briefly, the whole brains were removed from anesthetized rats and immediately weighed to determine wet weight. The brain tissues were completely dried in an oven at 100° C. After 24h, the dry weight was measured. Brain water content was calculated as (wet weight−dry weight)/wet weight×100%.

The activities of MDA, SOD, and GPx in brain tissue were analyzed using using a commercial kits (Jiangcheng, Nangjing, China, #A003-1-2 for MDA, #A001-4-1 for SOD; #A005-1-2 for GPx) according to the manufacturer’s instructions.

The total protein from cortical was lysed in RIPA lysis with PMSF and protease inhibitor (Thermo Fisher Scientific, USA). The protein concentration was detected using a BCA assay kit (Beyotime, Shanghai China). Equal proteins (30 μg) were resolved by SDS-PAGE and transferred to a polyvinylidene difluoride membrane (Millipore, MA, USA). The membranes were blocked with 5% BSA and were incubated with primary antibodies to anti-Bcl-2 (Abcam), anti-Bax (Abcam), anti-Cleaved caspase-3 (CST), anti-GLS2 (Abcam), anti-HO-1 (CST), anti-p-AKT (CST), anti-t-AKT (CST) and anti-GAPDH (Abcam) overnight at 4° C. Then the membranes were incubated with secondary antibody and visualized using an enhanced chemiluminescence system (Pierce Biotech, IL, USA). The densitometry of each band was quantified by ImageJ software.

For Tunnel apoptosis staining, the 5 μm slides from brains of rats in sham, TBI, TBI+vehicle, or TBI+NaHS group were stained by the Tunnel staining kit (Roche, USA) according to the manufacturer’s instructions. Briefly, the slides from brains of rats were dewaxed and rehydrated. Then, the slides were incubated with TUNEL reaction mixture at 37° C for 1 h. The nuclei were stained with DAPI.

This work was supported by grants from the Key research project of Health Commission of Hebei Province of China (No. 20200892).