Copyright: © 2021 Hang et al. This is an open access article distributed under the terms of the Creative Commons Attribution License (CC BY 3.0), which permits unrestricted use, distribution, and reproduction in any medium, provided the original author and source are credited.

Recently, long noncoding RNAs (lncRNAs) were to participate in gastric cancer progression [3–5]. LncRNAs are noncoding RNAs with more than 200 nucleotides, and most lncRNAs lack protein-coding ability [6]. LncRNAs regulate various biological processes by modulating gene expression at different levels, including the transcriptional, pre-transcriptional and post-transcriptional levels [7–9]. Linc00641 has been reported to play both an oncogenic role and a tumor suppressive function in different types of human cancers. Several studies have revealed an antitumor role of linc00641 in human cancers [10, 11]. For example, linc00641 inhibited bladder cancer progression by targeting the miR-197-3p/KLF10/PTEN/PI3K/Akt cascade [11]. Downregulation of linc00641 was found in bladder cancer tissues, and it was associated with a poor prognosis. The upregulation of linc00641 suppressed the proliferation, migration and invasion of bladder cancer cells and blocked tumor growth in vivo by interacting with miR-197-3p and targeting KLF10, leading to the inactivation of the PTEN/PI3K/Akt pathway [11]. Linc00641 repressed cell proliferation and induced apoptosis in non-small cell lung cancer (NSCLC) cells by sponging miR-424-5p to increase the expression of phospholipid scramblase (PLSCR4) [10]. Linc00641 overexpression hindered the proliferation, migration and invasion of breast cancer cells by sponging miR-194-5p [12]. In addition, linc00641 suppressed cervical cancer progression by modulating the miR-378a-3p/CPEB3 axis [13]. In support of the tumor inhibition role of linc00641, another study showed that linc00641 suppressed the proliferation of glioma cells by targeting miR-4262 and upregulating NRGN [14].

Linc00641 has also exhibited a tumor promotion function in some human cancers. For instance, one study demonstrated that silencing linc00641 reduced cell proliferation, migration and invasion, and it induced the apoptosis of acute myeloid leukemia cells by modulating miR-378a and ZBTB20 [15]. Linc00641 was correlated with better patient survival in renal cell carcinoma by sponging miR-942 and regulating SALL1, METAP1 and DCAF11 [16]. In another study, the inhibition of linc00641 blocked cell proliferation and migration in gastric adenocarcinoma [17]. Because the role of linc00641 in gastric cancer is currently unclear, in the present investigation, we explored the underlying mechanism of linc00641 in gastric cancer. We found that linc00641 promoted the malignant progression of gastric cancer cells by targeting miR-429 and increasing the expression of Notch-1. We concluded that targeting linc00641 may be a therapeutic strategy for gastric cancer. 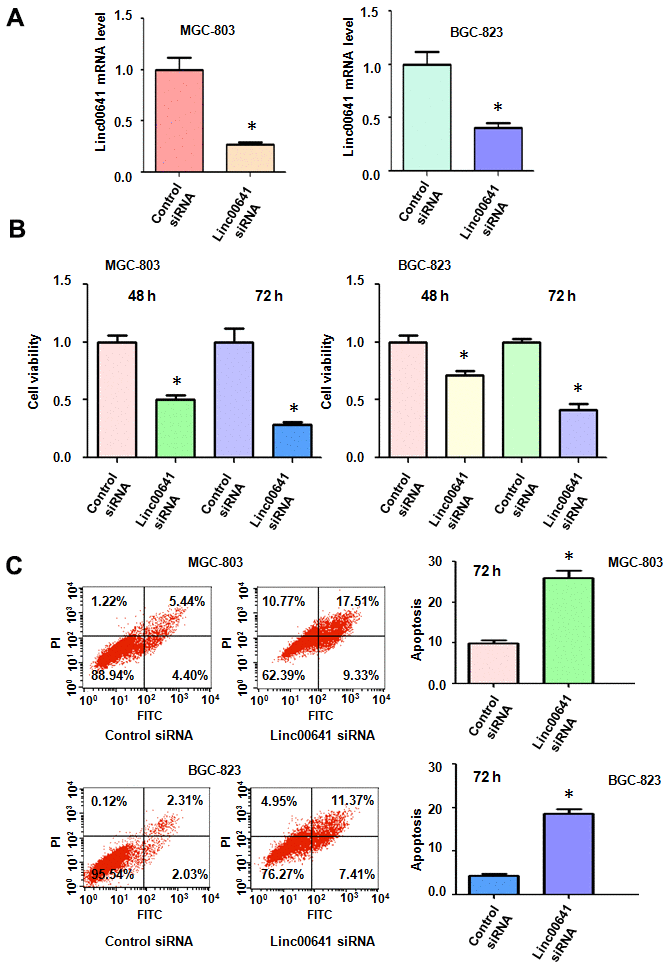 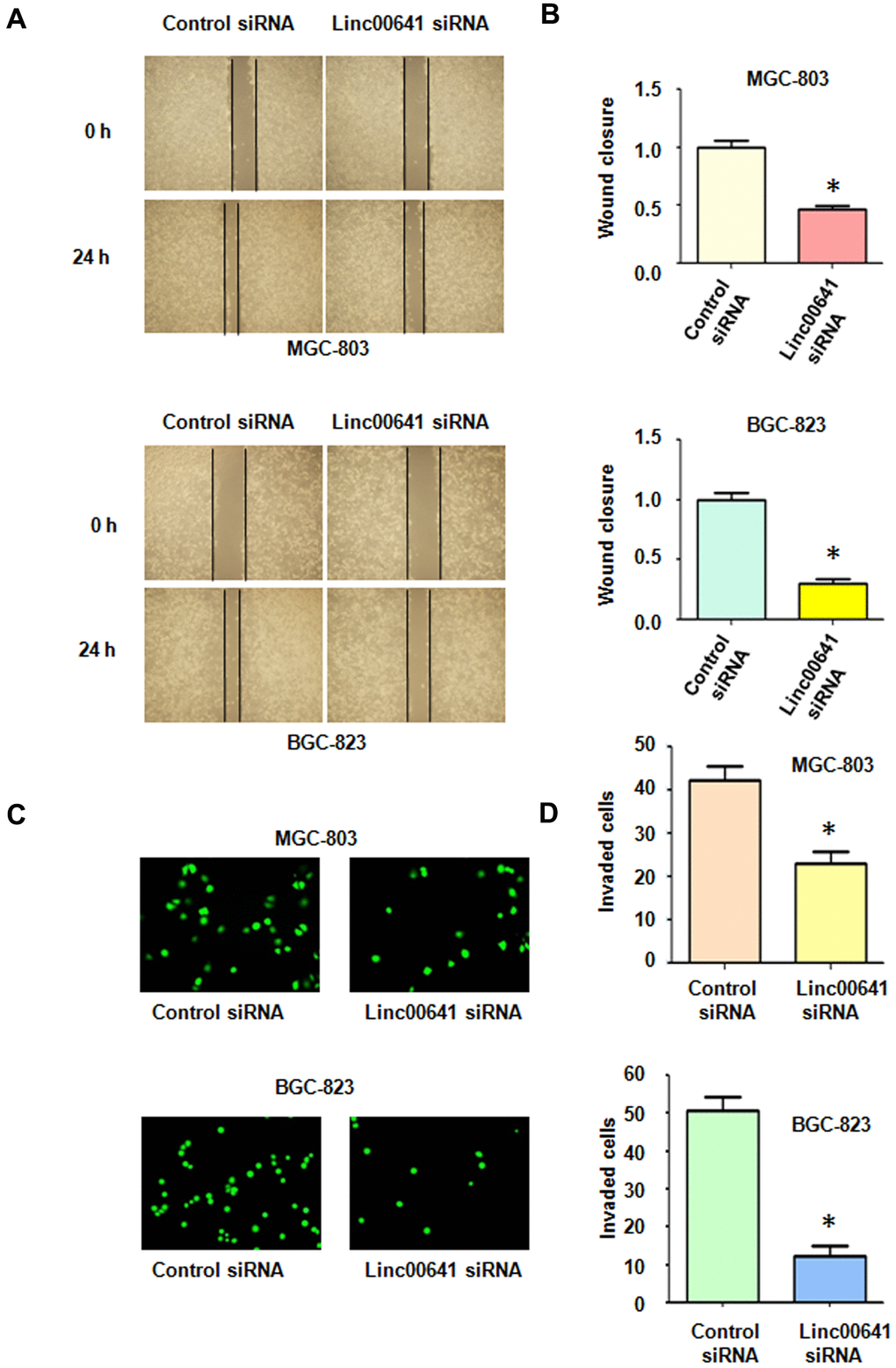 Figure 2. Effects of linc00641 silencing on migration and invasion. (A) Wound healing assays were carried out to test the effects of linc00641 silencing in gastric cancer cells. (B) Quantification of the migratory results.*P < 0.05 compared with the control siRNA. (C) Invasive ability was measured by Transwell invasion assays. (D) Quantification of the invasiveness results.*P < 0.05 compared with the control siRNA. 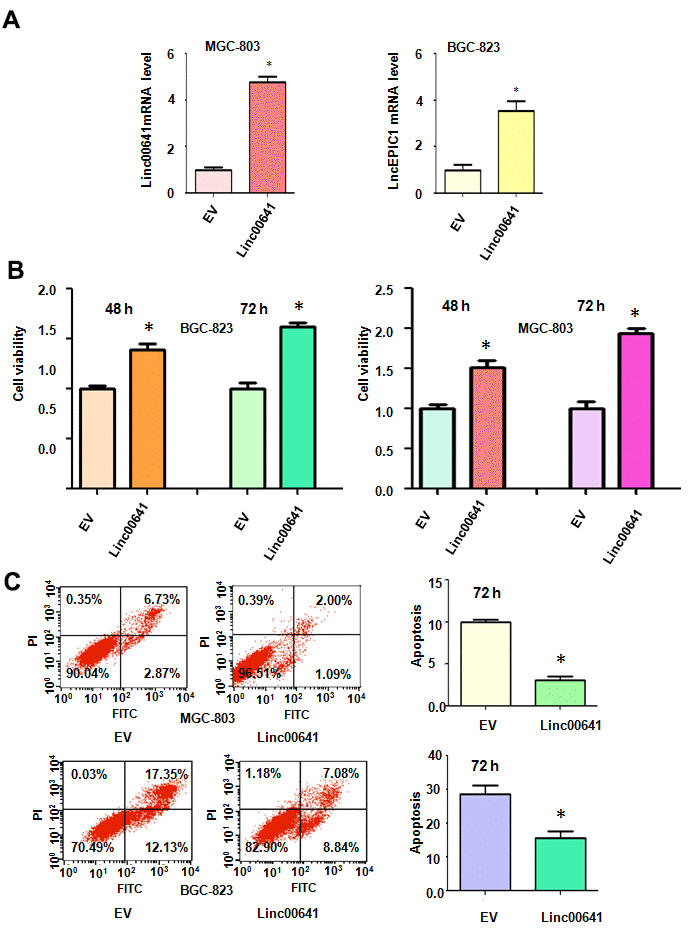 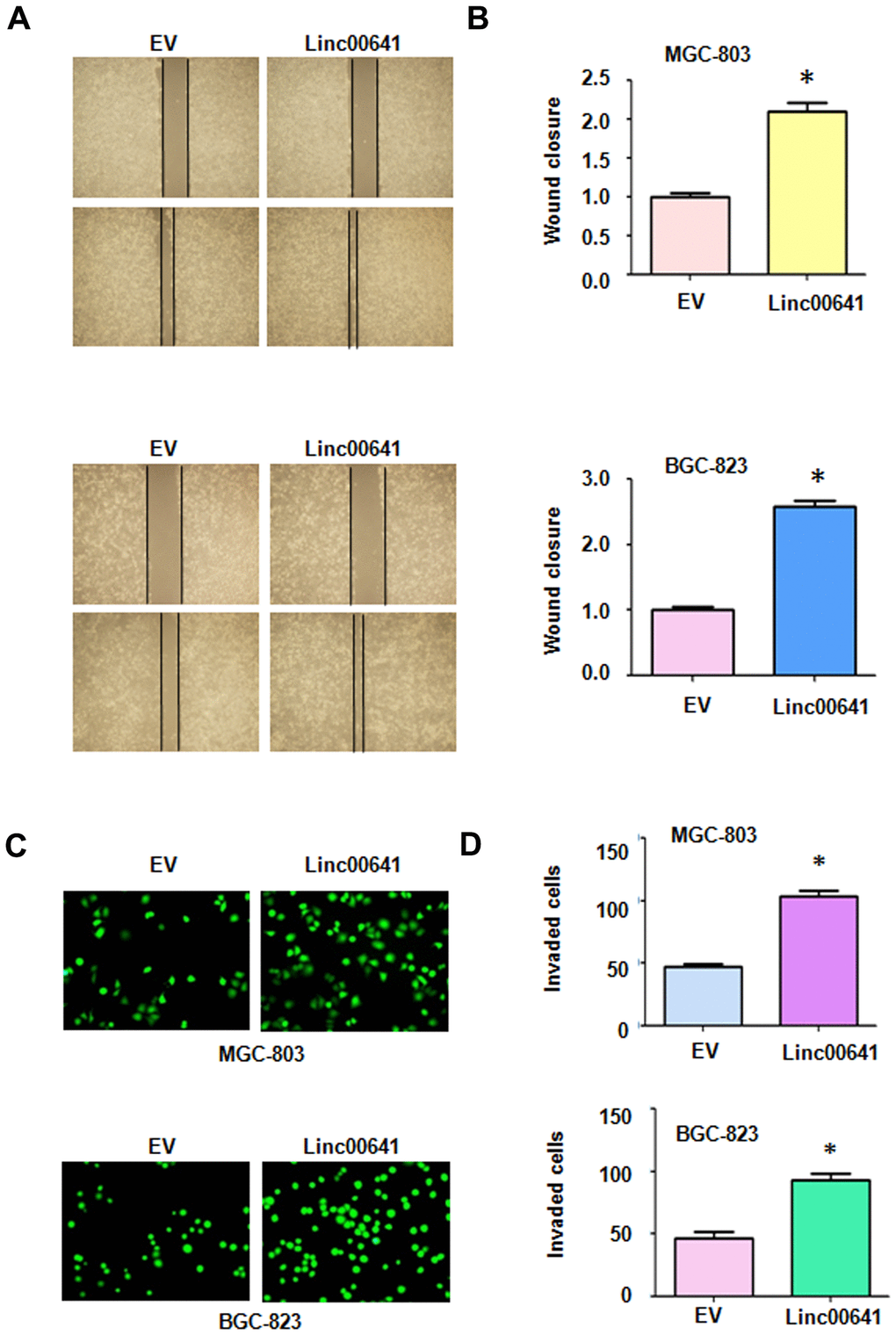 Figure 4. Effects of linc00641 overexpression on migration and invasion. (A) Wound healing assays were carried out to test the effects of linc00641 overexpression in gastric cancer cells. (B) Quantification of the migratory results.*P < 0.05 compared with EV. (C) Invasive ability was measured by Transwell invasion assays. (D) Quantification of the invasiveness results.*P < 0.05 compared with EV. 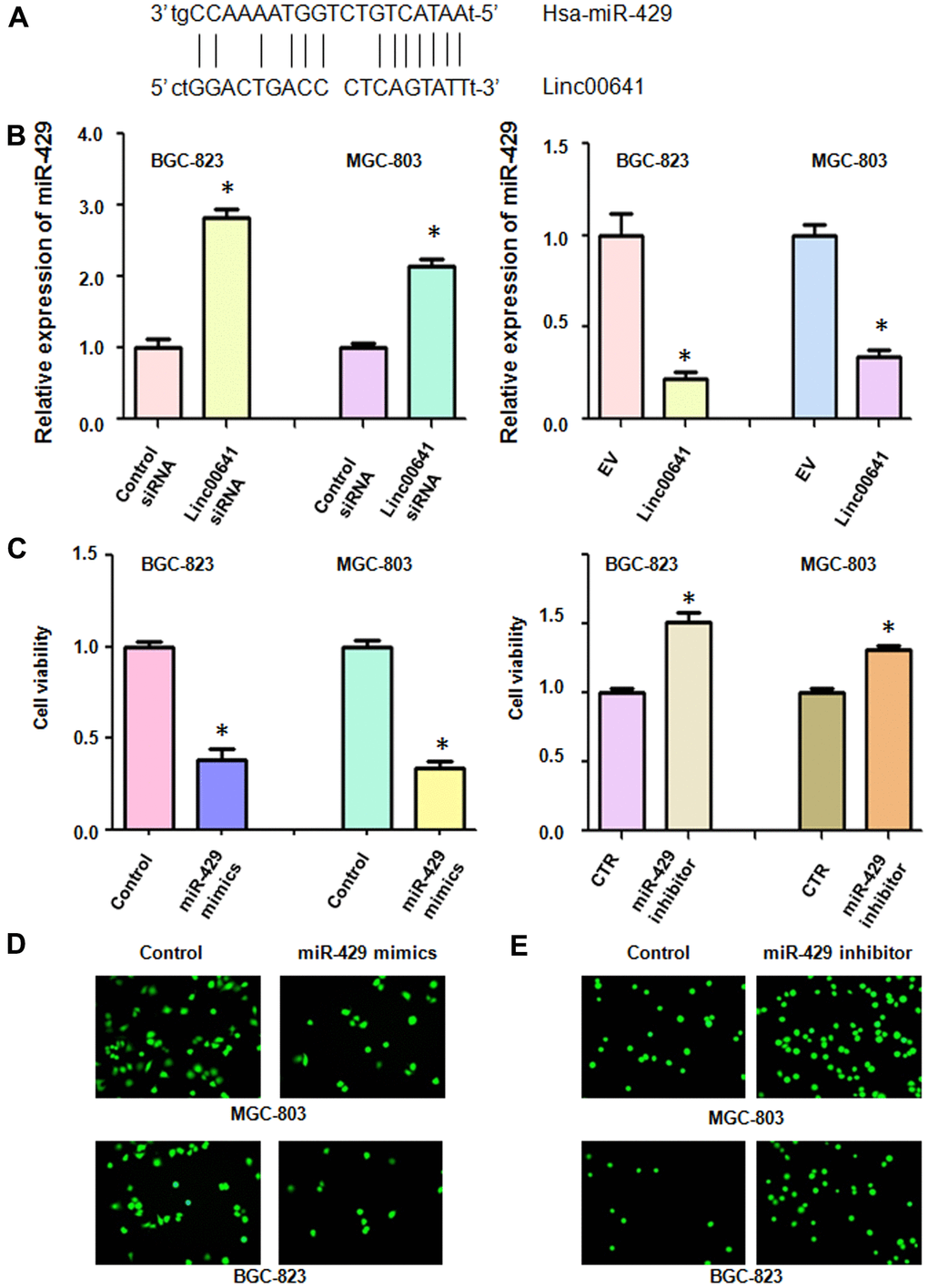 MiR-429 regulates the viability and invasion of gastric cancer cells 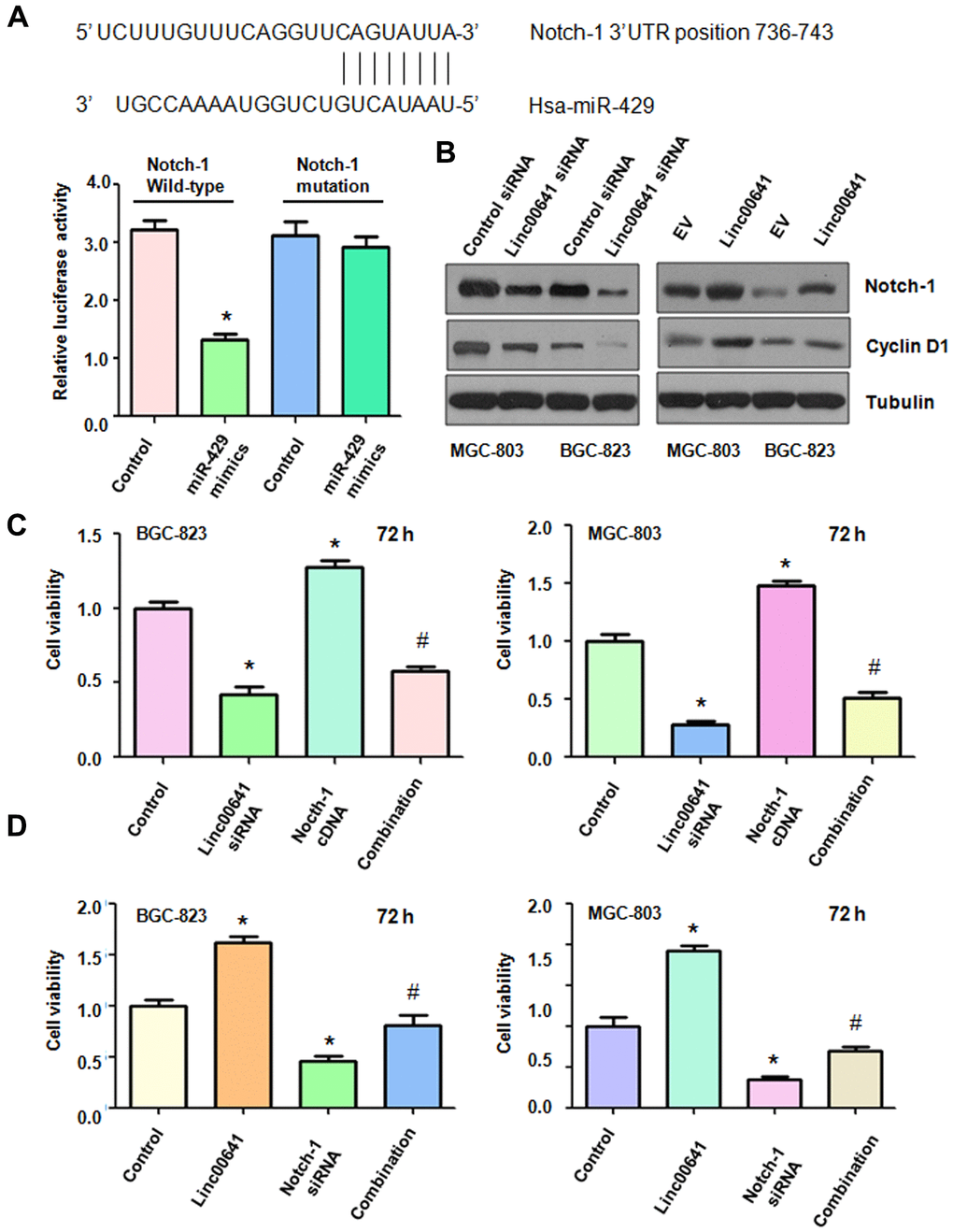 Linc00641 is involved in gastric tumorigenesis and progression. Linc00641 downregulation inhibits cell proliferation and migration in gastric adenocarcinoma [17]. High expression of linc00641 was observed in gastric cancer specimens and was correlated with patient prognosis. Moreover, linc00641 mediated the chemoresistance of oxaliplatin via the induction of autophagy by sponging miR-582-5p in gastric cancer [17]. Furthermore, gastric cancer patients with oxaliplatin resistance have higher levels of linc00641 expression [17]. In line with these findings, we found that linc00641 upregulation promoted cell viability, cell migration and invasion, while linc00641 silencing had the opposite effects. Linc00641 plays a different role in gastric cancer cells than it does in other primary tumors. This difference may be due to lncRNAs acquiring various additional activities that can make mutation-driven inactivation more deleterious. The eventual decay of the transcription that overlaps the gene promoter and the subsequent reliance on the transcript itself to maintain gene regulation may produce a new cis-acting functional lncRNA [18].

Several signaling pathways have been found to participate in gastric tumorigenesis. For example, FGF18-FGFR2 signaling induces the c-Jun-YAP1 axis and enhances gastric carcinogenesis [27]. The role of Notch-1 in gastric cancer has been characterized in recent years. Notch-1 mRNA levels are associated with the overall survival of gastric cancer patients [28]. Overexpression of Notch-1 prevents gastric cancer cells from undergoing TNFα-mediated apoptosis [29]. Notch-1 increases the cisplatin resistance of gastric carcinoma cells via the upregulation of the lncRNA AK022798 [30]. Notch-1 is also involved in the regulation of gastric cancer stem self-renewal activity and 5-FU resistance [31]. Indeed, we observed that Notch-1 overexpression promoted the viability of gastric cancer cells, while silencing Notch-1 had the opposite effect, suggesting that Notch-1 is a pivotal factor in the regulation of gastric cancer cell viability. Notably, linc00641 can act on many miRNAs and miR-429 targets multiple genes. Therefore, screening and quantification of linc00641 targets and miR-429 downstream genes are very important endeavors. It is necessary to mention that circular RNAs have been identified to play an essential role in gastric carcinogenesis and progression. Therefore, it is important to investigate the role of circular RNAs in gastric oncogenesis. In summary, linc00641 exerts its functions partly by targeting the miR-429/Notch-1 axis in gastric cancer (Figure 7). Because of the oncogenic functions of linc00641, targeting linc00641 could be useful to treat gastric cancer in clinical application in the future.

Linc00641 siRNA, Notch-1 siRNA, or control siRNA, miR-429 inhibitors, miR-429 mimics, and Notch-1 cDNA plasmid were transfected with Lipofectamine 3000 according to the manufacture’s protocols. The lentiviruses containing full-length linc00641 were used to infect the gastric cancer cells for the overexpression of linc00641.

The transfected MGC-803 and BGC-823 cells were placed in 96-well plates. The viability of gastric cancer cells was determined at 48 or 72 hours by the MTT assays.

The transfected gastric cancer cells were cultured for 48 or 72 hours and then were collected and washed with PBS. Then, the cells were resuspended in PBS and labeled with propidium iodide and Annexin V-FITC for 30 minutes in the dark. The apoptotic cell death was measured by flow cytometry.

The transfected gastric cancer cells in serum-free medium were placed in the upper chambers of a Transwell inserts pre-coated with Matrigel. The lower chamber contained 10% FBS. After 24 hours, the invading cells were stained with calcein AM for 40 minutes and then were photographed under a microscope.

The transfected gastric cancer cells were plated in six-well plates. After the cells reached 90% or greater confluency, we created a wound with a pipette tip. We washed the plates with PBS to remove any debris and filled the plates with 3 ml of medium. After 20 hours incubation in a tissue culture incubator, the wound fields were photographed under a microscope.

GraphPad Prism 5.0 was employed for analyzing the measurement data. ANOVE was performed to analyze the difference among the different groups. A p < 0.05 was considered to be statistically significant.

QH and ML designed the study. QH, JL and LZ performed the experiments and data interpretation. QH wrote the manuscript and ML edited the paper. All authors approved the manuscript.

This work is supported by a project of Bengbu Medical College Technology Development (BYKF1743).