Genetic effect of MTHFR C677T, A1298C, and A1793G polymorphisms on the age at onset, plasma homocysteine, and white matter lesions in Alzheimer's disease in the Chinese population

Copyright: © 2021 Jiang et al. This is an open access article distributed under the terms of the Creative Commons Attribution License (CC BY 3.0), which permits unrestricted use, distribution, and reproduction in any medium, provided the original author and source are credited.

Background: Three polymorphisms in the Methylenetetrahydrofolate reductase (MTHFR) gene (C677T, A1298C, and A1793G) were reported associated with AD. However, their genotype distributions and associations with age at onset (AAO), homocysteine, and white matter lesions (WML) were unclear in the Chinese AD population.

Conclusions: The genotype distributions of C677T and A1298C polymorphisms are associated with AD in the Chinese population. Moreover, AD patients with C677T polymorphism are prone to present an earlier onset, higher homocysteine level, and more severe WML.

Alzheimer's disease (AD) is a progressive neurodegenerative disease. It is the most common form of dementia in the elderly, mainly characterized by the progressive decline in memory and cognitive function. AD can be classified as early-onset AD (EOAD, age at onset (AAO)<65 years) and late-onset AD (LOAD, AAO≥65 years). The etiology of AD is multifactorial and complex. Mutations in the amyloid precursor protein gene (APP), presenilin1 gene (PSEN1), and presenilin2 gene (PSEN2) are the leading causes for familial EOAD. Simultaneously, the convergence of genetic and environmental factors in aging is the primary drive for sporadic LOAD. Among multiple genetic factors associated with sporadic LOAD, apolipoprotein E (APOE) is the most critical risk factor [1, 2]. To date, genome-wide association studies have identified more than 50 AD-related genes/loci, shedding new light on the pathogenesis of AD [3].

It is well established that the Methylenetetrahydrofolate reductase (MTHFR) gene is critical for the folate cycle and homocysteine metabolism. Reduction and loss of MTHFR function lead to an elevated homocysteine level, which is considered a risk factor for AD. In addition, Hyperhomocysteinemia has also been linked to white matter signal abnormalities (WMSA) in magnetic resonance imaging (MRI), which is also recognized as a risk factor for AD [4, 5]. Recently, Hoffman et al. [6] proposed a novel mechanism leading to AD. The genetic MTHFR deficiency could enhance phosphorylation of amyloid-β protein precursor (AβPP) at Thr668, correlating with enhanced accumulation of demethylated protein phosphatase 2A (PP2A) and activation of glycogen synthase kinase-3β (GSK-3β), which was known to critically influence neuronal AβPP function and pathological amyloidogenic processing [6].

So far, three polymorphisms (C677T (rs1801133), A1298C (rs1801131), and A1793G (rs2274976)) of the MTHFR gene have been reported to be associated with AD. Among them, the C677T is the most significant polymorphism with most investigations in the clinic. The T allele prevalence (C677T) varied across ethnic groups and regions, with a range from 12% to 57% in European, Asian, American, and African populations [7, 8]. It should be pointed out that the C677T polymorphism was associated with increased susceptibility of AD in Asian and Caucasian populations [9–12]. However, there is still controversy over whether A1298C is related to the risk of AD. Previous studies have proposed that the A1298C polymorphism might play a protective role in developing AD in Indian and Japanese populations [13, 14], which was inconsistent with the Tunisian population's results reported by Mansouri et al. [15]. As for A1793G polymorphism, the protective effect was only confirmed in Japanese AD patients [13]. In the present study, we aimed to explore the genotype distributions of three polymorphisms and their associations with age at onset (AAO), homocysteine, and white matter lesions (WML) in the Chinese AD population.

A total of 721 patients with AD and 365 cognitively unimpaired control subjects were involved in the study (Table 1). AD patients were recruited from the Department of Neurology, Xiangya Hospital, Central South University (Hunan, China). All patients were clinically diagnosed by two experienced neurologists and met the National Institute of Neurological and Communicative Disorders and Stroke and Alzheimer's Disease and Related Disorders Association criteria [16] for probable or definite AD. Among them, 121 AD patients performed homocysteine examinations and brain MRI scanning. Besides, 365 unaffected community-dwelling individuals without AD symptoms were recruited as healthy controls and matched for ethnicity and area of residence. The study was approved by the Ethics Committee of Xiangya Hospital, Central South University (institutional review board equivalent). Written informed consent was obtained from all participants involved in the study.

Blood samples (10 mL per subject) were obtained by venipuncture from each subject and transferred to ethylenediaminetetraacetic acid (EDTA) tubes. Genomic DNA was isolated from peripheral blood leukocytes using a standard protocol [17]. All isolated DNA samples were measured for quality and quantity by a fluorometer and normalized to 50 ng/μL. Polymerase chain reaction (PCR) was performed on MTHFR (NM_001330358) C677T, A1298C, and A1793G polymorphisms. Primers for MTHFR and APOE genotypes amplification were shown in Supplementary Table 1. All PCR products were sequenced with Big Dye terminator v3.1 sequencing chemistry on an ABI 3730xl DNA analyzer (Applied Biosystems). DNA sequences were analyzed using the sequencing software of Mutation Surveyor (Softgenetics). Variants were checked against established databases (Genome Aggregation Database (gnomAD) and dbSNP v.150).

Distributions of MTHFR C677T, A1298C, and A1793G polymorphisms in AD patients and controls

The allele and genotype distributions of MTHFR C677T, A1298C, and A1793G polymorphisms of all participants were presented in Table 2. Allele T of the C677T polymorphism was significantly more frequent in the AD group (29.7%) than the control group (25.5%, P = 0.040). Moreover, the genotype distribution showed a significantly higher TT genotype in AD patients (6.1%) compared with controls (2.5%, P < 0.05). In terms of the A1298C polymorphism, allele C was more common in the AD group (19.0%) than the control group (16.7%), but no statistical difference was determined (P > 0.05). Furthermore, the distribution of genotypes showed a significantly higher percentage of CC genotype in the AD group (2.4%) compared with the control group (0.0%, P < 0.05). However, as for the A1793G polymorphism, no statistical difference was observed in the allele and genotype distributions between AD patients and controls (P > 0.05) (Table 2).

Table 2. Allele and genotype distributions of MTHFR polymorphisms in AD patients and controls.

The genotype distribution of the MTHFR gene in AD patients and controls was also determined after stratification of all samples by APOE4 status. In APOE4 carriers, the frequency for the T allele (C677T) was prominent in cases compared with controls (P = 0.039), and the distribution of the C677T genotypes was also significantly different (P = 0.047). At the same time, no statistical difference was determined in the A1298C and A1793G polymorphisms (P > 0.05). In APOE4 non-carriers, allele and genotype distributions of the A1298C polymorphism were significantly different between AD patients and controls (P = 0.044, P = 0.003, separately). Still, no statistical difference was found in C677T and A1793G polymorphisms (P > 0.05) (Table 3).

Table 3. Allele and genotype distributions of MTHFR polymorphisms in APOE4 carriers and non-carriers. 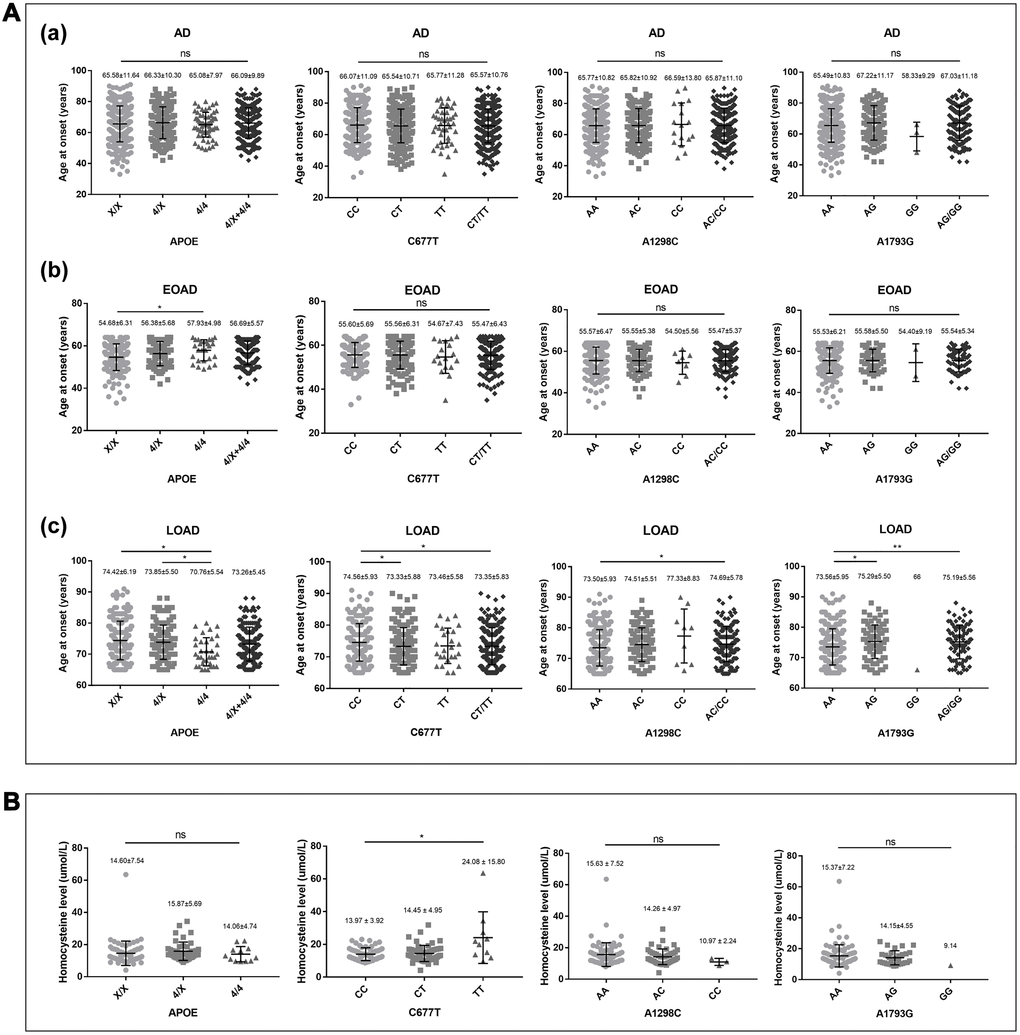 Correlations of homocysteine with MTHFR polymorphisms in AD patients

The Fazekas scale is a widely used method to visually assess white matter lesions (WML) in MRI data. The Fazekas score was significantly higher in AD patients carrying the MTHFR T allele (C677T) (P = 0.006), as well as TT (C677T) genotype (P = 0.024). In terms of the A1793G polymorphism, the Fazekas score was significantly lower in patients with AG/GG genotypes (P = 0.013). However, no statistical difference was determined in AD patients with A1298C polymorphism (P > 0.05). (Table 4)

Gene-gene interactions of MTHFR and APOE in AD patients

To our best knowledge, this is the first study to systematically analyze the genotype distribution of three MTHFR polymorphisms (C677T, A1298C, and A1793G) and their associations with AAO, homocysteine, and WML in the Chinese AD cohort. We found two polymorphisms, including C677T and A1298C, were associated with AD in Chinese populations. Moreover, in APOE4 carriers, the frequency of the allele T (C677T) was prominent in AD patients compared to controls, indicating that C677T might depend on the presence of APOE4.

Interestingly, the C677T polymorphism was associated with AAO, homocysteine, and WML, suggesting it may be a risk factor in developing AD. Several studies have documented that C677T resulted in a mildly dysfunctional thermolabile MTHFR enzyme, leading to reduced enzymatic activity and elevated blood homocysteine levels [19–21], suggesting it may play an important role in AD. In our results, we confirmed a significantly lower AAO in LOAD patients carrying CT/TT (C677T) genotypes, suggesting that C677T polymorphism was associated with susceptibility to LOAD. In contrast, AAO was significantly higher in LOAD patients carrying AC/CC (A1298C) and AG/GG (A1793G) genotypes, indicating A1298C and A1793G polymorphism may delay the onset of AD. Sutovsky et al. [22] reported that AAO in APOE4 non-carriers was higher than APOE4 carriers in AD patients (higher by 3.4 years), which was similar to our results (higher by 3.7 years in LOAD). Moreover, AAO in group of ‘APOE X/X + CC (C677T) + AA (A1298C)’ in AD patients was higher than group of ‘APOE 4/X + 4/4 + TT (C677T)’ or group of ‘APOE 4/X + 4/4 + CC (A1298C)’ (higher by 5.3 years and 2.9 years, separately). Combining the above two results, the single effect of TT (C677T) increased the difference in AAO (1.9 years), while CC (A1298C) decreased the difference in AAO (0.5 years), which was similar to our results (both 1.2 years in LOAD).

There was a lack of association of the epistatic interaction between APOE4 and MTHFR C677T polymorphism, either in LOAD or EOAD (P > 0.05), which was inconsistent with previously reported results [22, 26]. These may depend on diverse characteristics of the study population, including ethnicity and geographical location. The APOE4 proportion was varied in different regions from 14.1% (lowest, Asia and Southern Europe) to 61.3% (highest, Northern Europe) [27]. The prevalence of APOE4 alleles in our AD patients was 43.3% compared with 75.2% in the reported positive study (75.2%) [22], which may explain the difference. However, a significantly higher frequency of MTHFR CC genotype (A1298C) was observed in APOE4 non-carriers in AD (p < 0.05), indicating that there may be an epistatic interaction between APOE4 and MTHFR A1298C polymorphism.

The MTHFR enzyme is a dimer where each monomer is composed of a catalytic domain that binds the FAD cofactor and folate, and a regulatory domain that binds S-adenosylmethionine. The 222 position in the polypeptide (corresponding to 677 in cDNA) resides in the catalytic domain, and the 429 position (1298 in cDNA) resides in the regulatory domain [20]. Vraneković et al. [28] reported that the 'C configuration' (formed by genotypes of 677CC and 1298CC) of the MTHFR enzyme was more stable than the 'E configuration' (formed by genotypes of 677TT and 1298AA). Our various results of the C667T and A1298C may be explained by the destabilization of the enzyme dimer, which could be caused by the altered polypeptide conformations, including the movement of polypeptide domains induced by the variants [28, 29]. Inspired by the model of C667T and A1298C discussed above, we speculated that A1793G might function in a similar way, which requires further investigation. Moreover, the N5-methyltetrahydrofolate could spontaneously release formaldehyde (FA) after a series of actions [30]. Several studies provided evidence that endogenous formaldehyde was closely related to AD, such as essential for Aβ self-aggregation [31–33]. And scavenging FA could be an effective strategy for treating AD [31]. Therefore, polymorphisms of the MTHFR gene may affect the development of AD by affecting the release of FA.

The genotype distributions of MTHFR C677T and A1298C polymorphisms are associated with AD in the Chinese population. Moreover, AD patients with C677T polymorphism are prone to present an earlier onset, higher homocysteine level, and more severe WML.