Ovarian cancer (OC) is a very malignant cancer derived from the ovary [1]. Over 20,000 new patients with OC were diagnosed and about 14,000 OC resulted in deaths every year only in USA [2]. Although the approaches for OC treatment have been improved in the past years, the five year survival rate in OC patients remains less than 40% [3]. Thus, illustrating the mechanism of OC development and progression is quite important for developing novel effective therapeutic targets.

Circular RNAs (circRNAs) are another member of noncoding RNAs (ncRNAs), which are characterized by a closed loop structure [4]. CircRNA is resistant to exonuclease and very stable [5]. Hence, circRNAs may be potential biomarkers for diagnosis or prognosis. Recent evidence has demonstrated that circRNAs are extensively expressed in tumor tissues [6]. Aberrant expression of circRNAs may cause tumorigenesis. Moreover, circRNAs participate in multiple biological processes in cancer cells through regulating proliferation, apoptosis or metastasis [7]. For instance, circSEC31A contributes to lung cancer proliferation and invasion through inhibiting miR-376a [8]. Hsa_circ_0004872 is a tumor suppressor to repress gastric cancer cell proliferation and migration [9]. In addition, circSEMA5A overexpression enhances bladder cancer cell proliferation and migration via facilitating ENO1 expression [10]. Therefore, it is essential to investigate the function of OC-associated circRNAs. 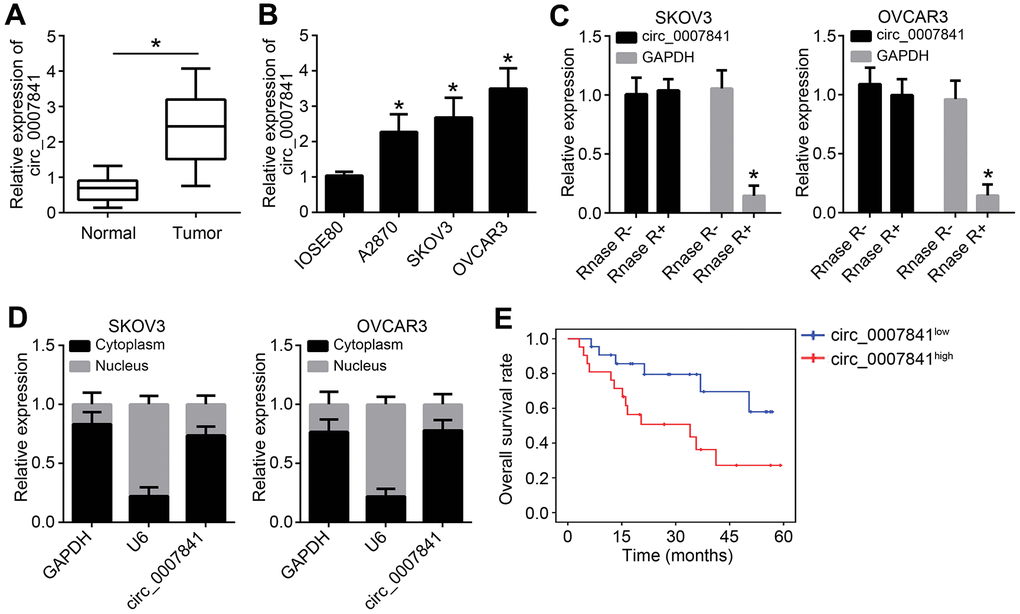 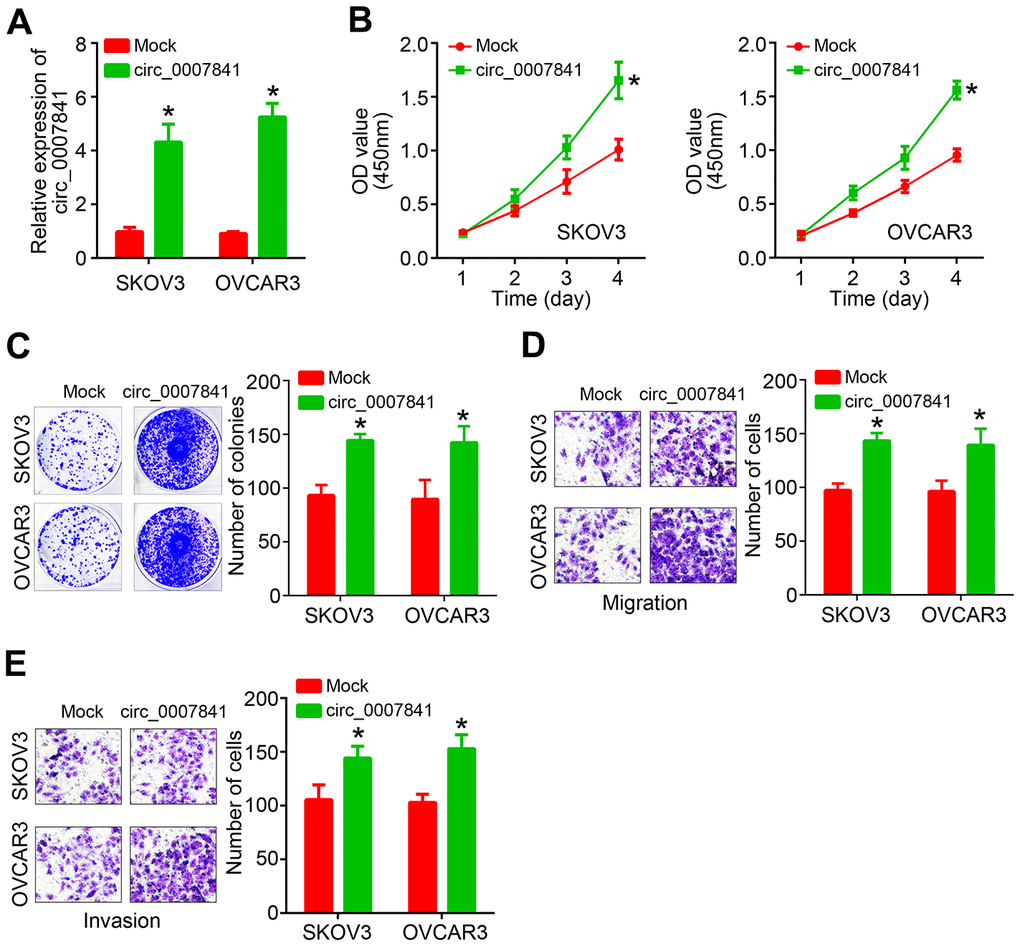 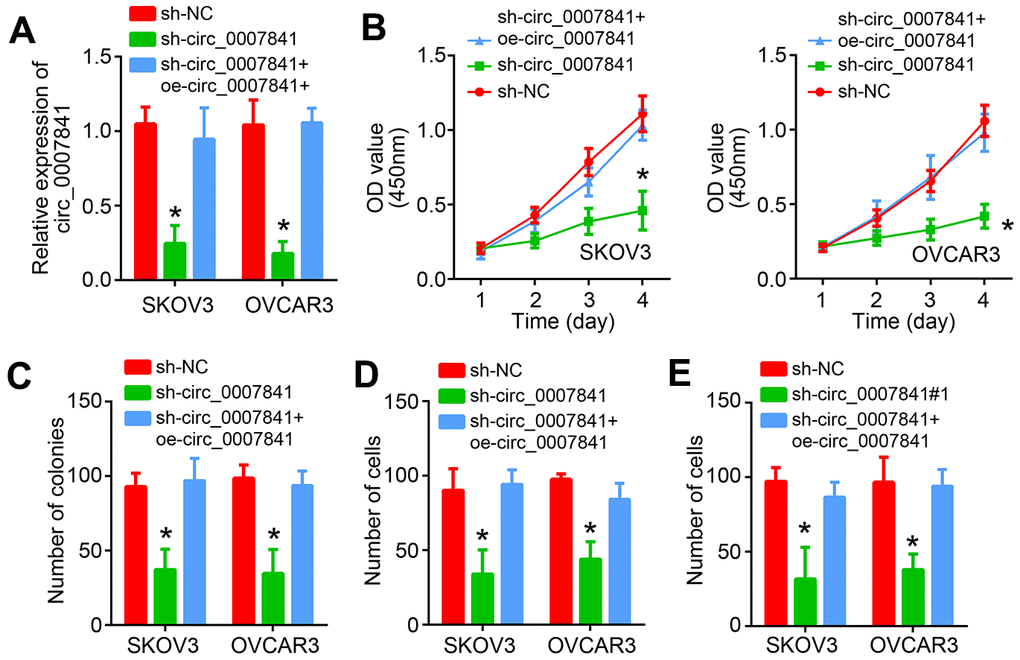 Afterwards, the targets of miR-151-3p were predicted through three online tools and MEX3C was identified (Figure 5A). Similarly, the wide-type and mutant luciferase reporters were constructed (Figure 5A). Luciferase reporter assay indicated that MEX3C-WT reporter activity was suppressed by MEX3C mimics (Figure 5B). RIP assay showed that Ago2 could enrich both MEX3C mRNA and miR-151-3p (Figure 5C). In addition, miR-151-3p mimics inhibited the expression of MEX3C (Figure 5D). We noticed that miR-151-3p level was negatively correlated with MEX3C in OC tissues (Figure 5E). However, MEX3C level was positively correlated with circ_0007841 (Figure 5F). Circ_0007841 knockdown suppressed MEX3C expression whereas miR-151-3p inhibitors reversed it (Figure 5G), indicating that circ_0007841 promotes MEX3C expression via acting as the ceRNA for miR-151-3p. 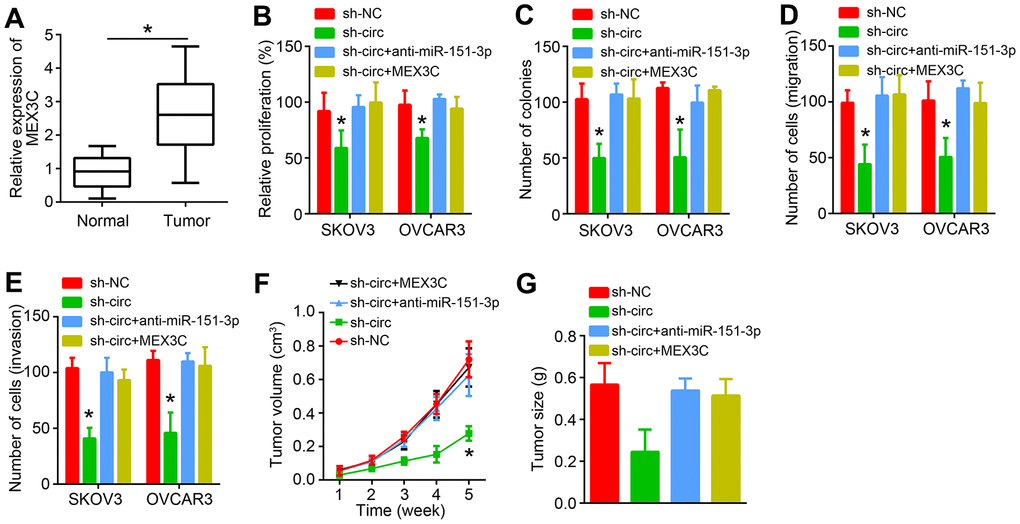 In past few years, more and more works have discovered the functions of circRNA in cancer, including OC. For example, circRNA circEXOC6B suppresses OC proliferation and invasion through inhibiting miR-421 [13]. Circular RNA S-7 is upregulated in OC and promotes EMT by restraining miR-641 [14]. In addition, circRNA ITCH is an anti-cancer gene to inhibit OC growth and metastasis via repressing miR-106a [15]. However, in other types of cancer, there is no similar study about circ_0007841 roles. In our study, we discovered its overexpression in OC tissues and implied that circ_0007841 may be a prognostic biomarker. Finally, we demonstrated that circ_0007841 promotes OC growth in vitro and in vivo. Thus, our data for the first time defined the oncogenic roles of circ_0007841 in OC.

CircRNAs were discovered to exert competing endogenous RNA (ceRNA) for miRNAs in cancer [7]. For instance, circRNA RNF111 is the ceRNA for miR-27b to promote gastric cancer proliferation [16]. Circ-ZNF652 is the ceRNA for miR-29a to enhance liver cancer growth and metastasis [17]. Circ_0007841 has been shown to sponge miR-338 and miR-129 multiple myeloma [12, 18]. In this study, we performed bioinformatics analysis and finally confirmed that circ_0007841 was the ceRNA for miR-151-3p in OC. miR-151-3p is involved in several cancers, such as breast cancer [19], nasopharyngeal carcinoma [20] and colon cancer [21]. Whether miR-151-3p has a similar role in OC is unknown. Our data showed that miR-151-3p expression was inhibited by miR-151-3p. And miR-151-3p inhibition rescued the proliferation, migration and invasion of OC cells, suggesting that it is a tumor suppressor.

Afterwards, bioinformatics was used to search the targets of miR-151-3p. We identified MEX3C. Luciferase reporter assay and RIP assay demonstrated the interaction between miR-151-3p and MEX3C. Besides, we found that circ_0007841 shRNA and miR-151-3p mimics suppressed MEX3C expression. More importantly, MEX3C expression was positively correlated with circ_0007841 and negatively correlated with miR-151-3p in OC tissues. A recent research indicates that MEX3C promotes bladder cancer development by regulating metabolism [22]. Whether MEX3C regulates OC remains unknown. Our study showed that MEX3C was upregulated in OC tissues. MEX3C overexpression promoted OC proliferation, migration and invasion in vitro and in vivo. Therefore, MEX3C is a new oncogene in OC.

Summarily, we confirmed the significant roles of circ_0007841 in OC malignant progression. Our data demonstrated that circ_0007841 worked as the ceRNA for miR-151-3p to facilitate MEX3C expression and promote OC cell proliferation, migration and invasion. However, the downstream signaling of miR-151-3p/MEX3C is still elusive, which requires investigation in the future.

43 OC tissues and adjacent normal tissues were collected from The Second Hospital of Harbin Medical University. Tissues were stored in liquid nitrogen and not treated by chemotherapy or radiotherapy before surgery. Association of circ_0007841 level and clinicopathological parameters in OC patients was presented in Table 1. This study was approved by the Ethics Committee of The Second Hospital of Harbin Medical University. All patients provided written informed consents.

For colony formation assay, cells were plated into 6-well plates and cultured for 14 days. Finally, colonies was fixed with 4 % paraformaldehyde, stained with crystal violet and photographed.

The correlation between miR-151-3p and MEX3C was predicted by using TargetScan, miRDB and starBase tools.

Reporter vectors were obtained through inserting circ_0007841 or MEX3C sequence into the PGL3 vector (Promega, Madison, WI). For luciferase reporter assay, miR-151-3p and reporter vectors were co-transfected into cells using Lipofectamine 3000. After 48 h, the luciferase activity was measured using the dual-Luciferase Reporter Assay System (Promega, Sunnyvale, CA) based on the manufacturer’s protocols.

RIP assay was performed using Magna RIP RNA-binding protein immunoprecipitation kit (Millipore, MA) according to manufacturer’s instructions. Cell lysates were incubated with IgG (as a negative control) and Ago2 antibody. Then precipitated RNA was analyzed by qPCR.

6-week-old BALB/c nude mice were randomly divided into two groups (n=5 for each group). Then SKOV3 cells were inoculated subcutaneously into the flanks of nude mice. Tumor volumes were measured every one week according to the formula: Tumor volume = (length×width2)/2. Animal experiments were approved by the Ethics Committee of The Second Hospital of Harbin Medical University.

Results were analyzed by GraphPad Prism 7.0 software (GraphPad, La Jolla, CA, USA) and expressed as the mean ± SD. All experiments were repeated at least three times. P values were analyzed using Student’s t-test for two group comparison or one-way ANOVA for multiple group comparison. Kaplan Meier survival analysis was used for analysis of survival rate and P-value was calculated by the log-rank test. P<0.05 was considered as statistically significant.

This study was supported by The Second Hospital of Harbin Medical University.