Copyright: © 2021 Bai et al. This is an open access article distributed under the terms of the Creative Commons Attribution License (CC BY 3.0), which permits unrestricted use, distribution, and reproduction in any medium, provided the original author and source are credited.

FOXO3, a member of the forkhead box protein family, induces extracellular matrix breakdown and apoptosis in vascular smooth muscle, endothelial cells, and cardiomyocytes. FOXO3 also suppresses the effects of oxidative stress [12, 13]. HuR, also known as ELAVL1, is a widely expressed RNA-binding protein that stabilizes its mRNA targets and may promote atherosclerosis occurrence and development [14, 15]. We investigated the effects of lncRNA AK136714 on atherosclerosis. AK136714 can directly bind HuR and FOXO3 to inhibit inflammatory factor release and endothelial cell apoptosis.

We first analyzed the differentially expressed lncRNA of mice on a normal diet and mice on a high-fat diet. By analyzing the GEO database, the change of lncRNA expression in atherosclerotic plaques was obtained in a mouse atherosclerosis model, and the heat map showed the expression of lncRNA in each group (Figure 1A). The volcano plot shows the gene distribution (Figure 1B). We found that AK136714 expression was increased in plaques in atherosclerotic mice compared to normal diet mice (Figure 1C). Upregulation of AK136714 expression was also detected in the blood of high-fat diet mice (Figure 1D).

We established an animal model of atherosclerosis using AK136714 knockdown by Adenovirus (Ad-si-AK136714) infection. High-fat feeding was continued for 12 weeks, and the adenovirus was injected into the tail vein once a week for 8-12 weeks. Using qPCR, AK136714 expression was detected in vascular tissues of each group, which showed that Ad-si-AK136714 could effectively decrease AK136714 expression (Figure 2A). When compared to the control group, vascular oil red O staining showed that atherosclerosis-induced plaque formation was diminished by silencing AK136714 (Figure 2B). ELISA testing showed that, compared with the control group, the production and release of inflammatory factors was increased in mice on a high-fat diet. Additionally, silencing AK136714 inhibited the release of inflammatory factors (Figure 2C). The degree of vascular injury detected by oil red O staining showed that compared with the control group, arterial injury was increased in high-fat diet mice, and silencing AK136714 inhibited arterial injury (Figure 2D). Immunofluorescence showed that AK136714 was mainly in endothelial cell cytoplasm and co-localized with endothelial marker CD31 (Figure 2E). High lipids damaged endothelial cells, and AK136714 silencing could reverse the endothelial cell damage (Figure 2F). 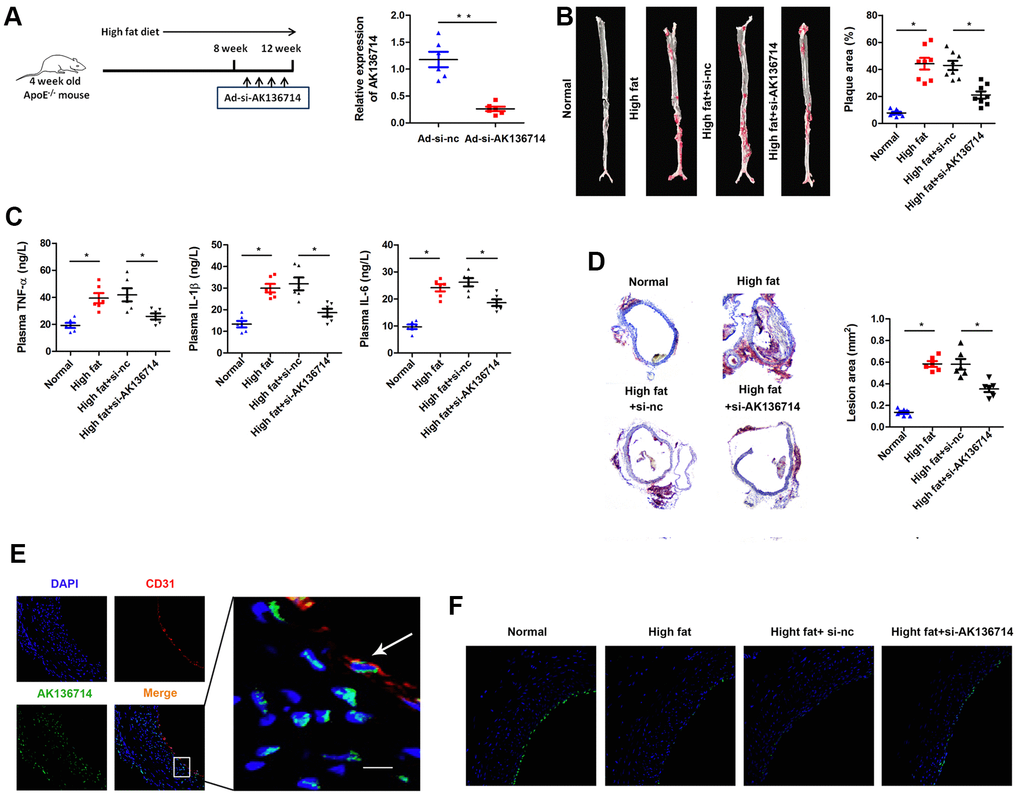 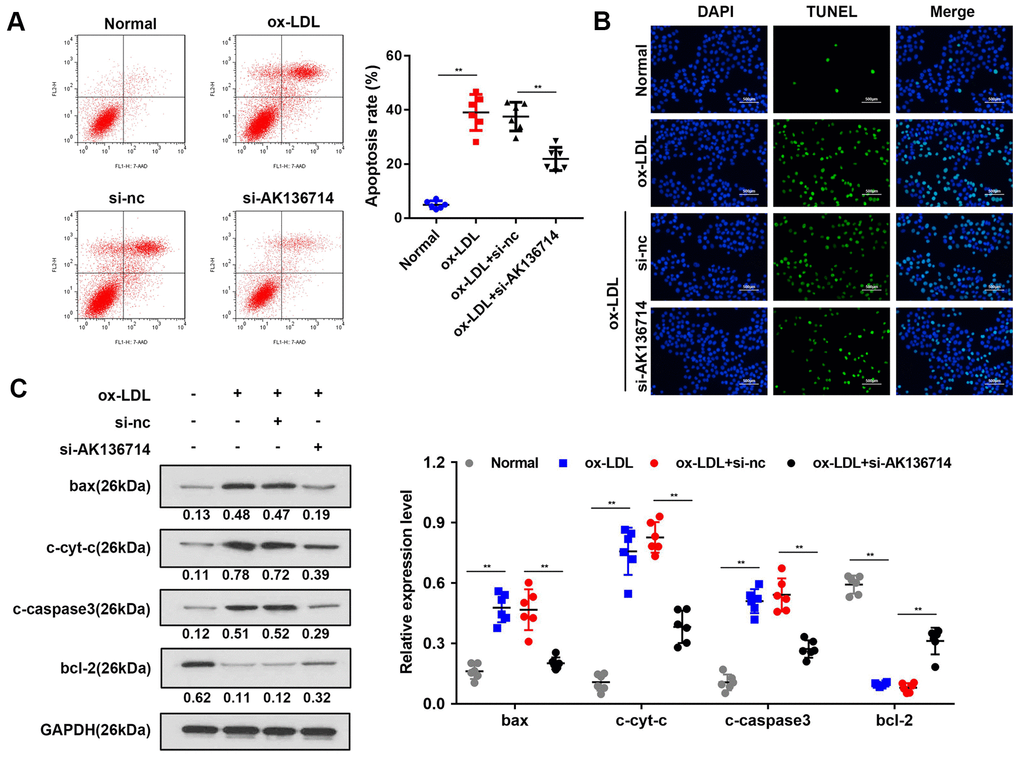 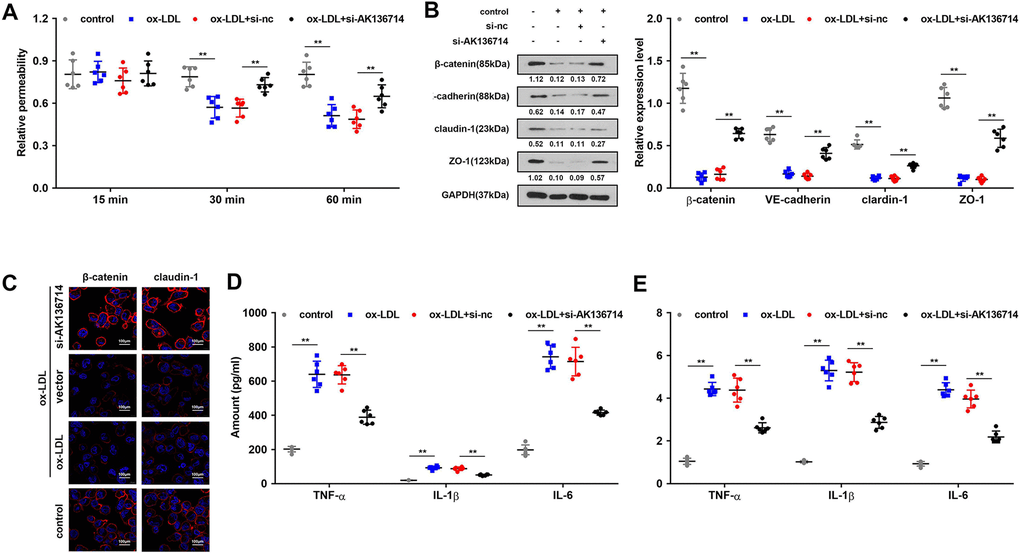 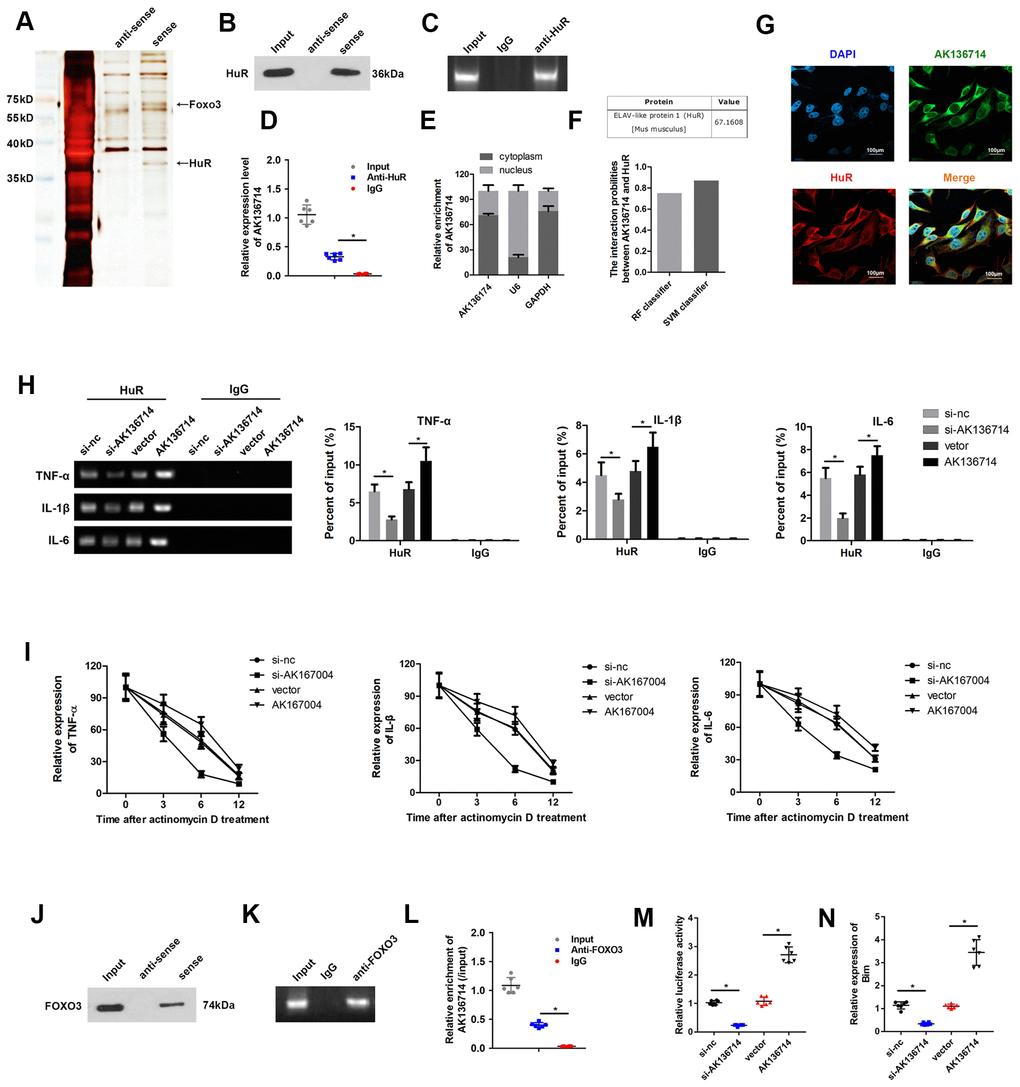 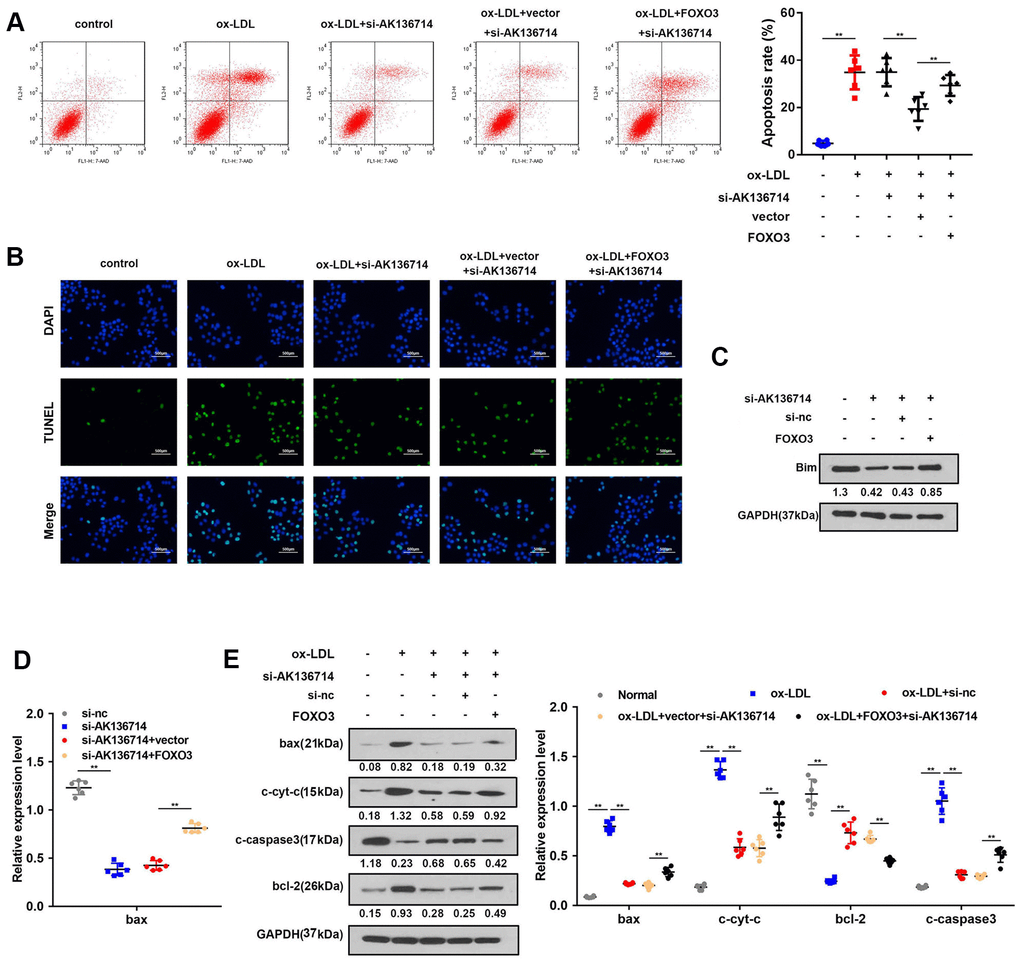 The intima of arterial vessels is an important barrier to regulate the material exchange between tissue and blood. A variety of factors can stimulate endothelial cells to malfunction and exfoliate, thereby diminishing the integrity and permeability of the intima. We found that AK136714 silencing can protect the endothelial barrier, which indicates that AK136714 silencing can protect endothelial cells and further inhibit the formation of atherosclerotic plaques. Atherosclerosis is not a simple lipid deposition disease in the blood vessel wall, but a process of chronic low-grade inflammation and oxidative stress. As atherosclerosis progresses, inflammatory cells and macrophages phagocytosing Ox-LDL increase and produce tumor necrosis factor-α (TNF-α), interleukin-8 (IL-8), interleukin-1 (IL-1), and other important inflammatory factors that further aggravate atherosclerosis. We found that AK136714 silencing can inhibit the release of inflammatory factors TNFα, IL-1β, and IL-6.

FOXO transcription factors can inhibit the proliferation of vascular smooth muscle cells (VSMCs), the migration of endothelial cells, the proliferation and hypertrophy of cardiomyocytes, and antioxidant stress [24–26]. AKT can phosphorylate FOXO3, inhibit VSMCs apoptosis at the plaque sites, protect the stability of the plaque, and reduce the incidence of cardiovascular accidents. The activation of FOXO3 can increase the apoptosis of SMCs and decrease plaque stability [27]. Tsuchiya et al. found that knocking out FOXO transcription factors in endothelial cells can increase NO synthesis, reduce inflammation and oxidative stress, and prevent atherosclerosis in mice with low-density lipoprotein receptor deficiency [28]. FOXO3 has dual effects of protecting and damaging cardiovascular function. We found that AK136714 binds with FOXO3 and activates the transcription of pro-apoptotic gene, Bim. ChIP or EMSA assays could confirm the interaction between FOXO3 and Bim.

We found a novel lncRNA, AK136714, which is increased in the plaque tissue and blood of atherosclerotic mice. Silencing of AK136714 inhibited inflammation and apoptosis of endothelial cells, and increased endothelial cell permeability.

Establishment of an atherosclerotic animal model

The mice were housed in an environment with light and dark (12h: 12h), temperature (22° C), humidity 50%. The ApoE mice in atherosclerosis group were fed high-fat diets (21% fat and 0.15% cholesterol) at 4 weeks of age. C57BL/6J was used as the normal control group and fed an ordinary diet (4% fat and 0% cholesterol). After 12 weeks, the mice were sacrificed and the aortas were removed for experiments.

HUVECs were used after 2-3 passages. After HUVECs were resuscitated, they were cultured in a high-glucose DMEM medium (containing 10% FBS, 1% penicillin) in a 37° C, 5% CO2 incubator. When the cell density reached 80%, the cells were digested and passaged with 0.25% trypsin. HUVECs were stimulated with ox-LDL (50 μg/ml) for subsequent cell experiments.

Adenovirus silencing AK136714 and overexpressing FOXO3 were established by Hanbio (Shanghai, China). Endothelial cells were cultured for 24 hours under stimulation with ox-LDL (50 mg/dL), and an atheroma model of the cells was cultured. After the endothelial cells attained 50% to 70% density, lentiviral stock solution (3.5x107 viral particles) was added, and Pollybrene reagent (Beyotime, Shanghai, China) was added to increase the infection efficiency. After 24 hours, the solution was changed and the new culture medium was added.

Before transfection, HUVECs in the logarithmic growth phase were digested and seeded at 1.0x106 cells per well in 6-well plates. The medium (containing 10% FBS) was added, then the plates were shaken and placed in a 37° C incubator. Cell transfection was performed according to the manufacturer’s instructions (Beyotime, Shanghai, China). The medium was replaced after 3 to 4 hours, and then the cells were cultured in a CO2 incubator for subsequent experiments.

Determination of TNFα, IL-1β and IL-6

The cell culture supernatant was centrifuged in a 4° C centrifuge at 2000 rpm for 5 min, and the supernatant was collected and stored at -80° C for testing. The experiment was performed according to the instructions of the TNF-α, IL-1β and IL-6 detection kit. The absorbance value of the sample was measured, and the corresponding concentration was calculated according to the standard curve.

Total protein was extracted using a commercial kit according to the manufacturer’s instructions (Beyotime, Shanghai, China). The protein concentration was determined in a Nanodrop 2000 system (Thermo Fisher, USA). SDS-PAGE gel was prepared, 40 μg protein was loaded for electrophoresis, then transferred to a PVDF membrane. The blots were then blocked in 5% skim milk at room temperature for 2 hr. The blots incubated with the primary antibody (1: 1000) in a shaker over night at 4° C. The blots were then incubated with secondary antibody (1: 5000) at room temperature for 2 hr. The blots were visualized by ECL chemiluminescence, and the gray value of each band was analyzed with QuantityOne software. GAPDH was used as the internal control.

Pathological and morphological changes of rat aorta detected by HE staining

After being thoroughly anesthetized, the rat’s thorax was exposed. The aorta was quickly excised, starting at the beginning of the aorta, through the bifurcation of the aortic arch to the descending aorta, and 2 to 3 cm of the thoracic aorta. We included the myocardial tissue at the root of the aorta, washed with ice, and then washed the aorta. The root and the aortic arch bifurcation vessels were immediately fixed in a 4% neutral formaldehyde solution, dehydrated by 75% ethanol, placed in xylene and transparent, and then immersed in wax. The embedded wax block was fixed on a microtome and sliced continuously with a thickness of 5 μm. The slices were flattened and dried on a glass slide and stained with HE. The aorta HE stained sections of each group were assessed under the light microscope.

Trizol reagent was used to extract total RNA from serum and brain tissues. The purity and concentration of RNA were detected by UV spectrophotometer. Reverse transcription was performed according to the Ribo™ mRNA/lncRNA qRT-PCR Kit instructions, followed by qPCR. PCR reaction conditions: pre-denaturation at 94° C for 5 min, then 40 cycles of denaturation at 95° C for 10 s, annealing at 60° C for 30 s, and extension at 72° C for 30 s. U6 was used as the internal reference, and the results were analyzed by 2-ΔΔCt method.

After treating the cells according to the requirements of each group, the cells were trypsinized, collected, and then washed twice with pre-chilled PBS at 4° C. After centrifugation, the PBS supernatant was discarded, and the cells were resuspended with buffer. After 5 μl of NanoVin-FITC and 1 μl of 0.1 g/l PI double fluorescent labeling was added, flow cytometry was used to detect cell apoptosis, which were analyzed using the Flowjo software.

The biotinylated probe of AK136714 and the control probe were synthesized by Sangon Biotech (Shanghai, China). Probe-coated beads were generated by co-incubating the probe with streptavidin-coated beads (Invitrogen, CA, USA) at 25° C for 2 h. Cells were lysed to extract total protein. After pretreatment of magnetic beads, RNA and beads were mixed. After separation, western blot and mass spectrometry were used to verify the downstream binding protein of AK136714.

SPSS18.0 software was used for data analysis. Comparison between groups was performed by one-way analysis of variance and t test. The data were expressed by x ± SD, and P < 0.05 indicated a statistically significant difference.

Data are available from the corresponding author with reasonable request.

This work was supported by 2019 Excellent talent team project of Hebei Province.