Background: Stomach adenocarcinoma (STAD) is one of the most prevalent malignances and ranks fifth in incidence and third in cancer-related death among all malignances. The prognosis of STAD is poor. The circadian clock is regulated by interlocked transcriptional-translational feedback loops that orchestrate circadian rhythms in some biological processes, including the immune response and metabolism. However, the association between core circadian clock genes and STAD patient prognosis is unclear.

Materials and Methods: In our study, bioinformatics methods were performed to explore the expression and prognostic value of core circadian clock genes in STAD and their association with immune infiltration.

Results: The mRNA levels of CLOCK, CRY1 and NR1D1 were upregulated, while the mRNA levels of CRY2, PER1, PER3 and RORA were downregulated in STAD tissues compared with normal tissues. Core circadian clock genes exert promoting or inhibiting effects on certain cancer-related hallmark pathways, including the DNA damage response, cell cycle, apoptosis and RAS/MAPK pathways. Moreover, core circadian clock genes were linked to drug sensitivity or drug resistance. Prognosis analysis revealed that high expression of PER1 and NR1D1 was associated with poor overall survival, progression-free survival, and disease-free survival rates in STAD patients. Validation analysis further confirmed our result. Immune infiltration analysis demonstrated that the expression of ICOSLG and CD70 was significantly correlated with immune cells, immune biomarkers, chemokines and their receptors.

Conclusions: Our results suggest that NR1D1 and PER1 are prognostic biomarkers and are associated with immune infiltration in STAD.

Stomach adenocarcinoma (STAD) is a global health problem and ranks fifth in incidence and third in cancer-related death among all malignances [1, 2]. It is thought that there are approximately 1 million new STAD cases diagnosed each year globally [3]. Although some risk factors have been identified, including Helicobacter pylori infection, and targeted therapy drugs, including trastuzumab, have been used for the treatment of STAD, the prognosis of STAD patients is still poor, with an overall survival rate of approximately 12 months in patients with advanced-stage STAD [4]. Thus, it is urgent to explore new marker for the prognosis and therapy for STAD patients.

The circadian clock and circadian rhythms play a vital part in some biological processes, including the immune response and metabolism [5]. Immunotherapy is increasingly suggested as the most promising therapy for STAD, in addition to operative treatment, especially for patients with advanced STAD [6]. A previous study found a close association between the immune system and the circadian clock [7]. Cancer chronotherapy that treats cancer according to a specific time in the circadian rhythm can improve the effectiveness and safety of drugs by optimizing the duration of medication efficacy without increasing the dose or changing the drug type [5]. To date, several core circadian clock genes, including but not limited to CLOCK, BMAL1, CRY1, CRY2, NR1D1, PER1, PER2, PER3, and RORA, have been reported in the literature [5]. However, the potential function of circadian clock in patients’ prognosis and their clinical significance in STAD are still unclear.

Increasing evidence has indicated that genomic research is one of the most reliable methods to accelerate the clinical and translational research and treatment of cancer. Accumulating evidences have elucidated the significance of circadian clock in different types of cancer, including thoracic cancer, bladder cancer and glioma [8, 9]. However, how the circadian clock interacts with the tumor microenvironment and immune infiltrates in STAD is still unclear. Therefore, our research hope to elucidate the expression of circadian clock in STAD and their relationship with prognosis and immune infiltration, and to use a high-throughput sequencing database to propose more suitable strategies for improving the anti-immune performance of STAD.

We downloaded gene-expression data of STAD from The Cancer Genome Atlas (TCGA) (https://portal.gdc.cancer.gov/) on January 12, 2021, and the TCGA STAD dataset (n = 415) was isolated for analysis. Moreover, we also downloaded the clinical information of each STAD patient on January 12, 2021, such as sex, tumor grade and survival status. Gene expression between STAD and gastric tissue was analyzed with Student's t-test. A sanguini diagram was built based on the R software package ggalluvial. R software v4.0.3 was utilized to perform Statistical analyses with a p-value of 0.05 as the threshold value.

The “maftools” package was utilized to analyze and visualize genetic mutation data obtained from the TCGA database. Number of mutated sample/all STAD Sample were defined as the gene SNV percentage. The horizontal histogram showed the genes with higher mutation frequency in STAD patients. Pathway activity module of GSCALite, a TCGA visualization web portal, was used to detect the role in the pathway activity analysis. And the method was described before [10].

The differential expression of mRNAs with |Log (Fold Change)| >3 thresholds was firstly identified by using “limma” package. After that, the "ggplot2" package in R software was used to perform Gene Ontology (GO) analysis, including the biological process (BP), cellular component (CC), and molecular function (MF) categories. Moreover, this package was also utilized to perform Kyoto Encyclopedia of Genes and Genomes (KEGG) analysis.

The median gene expression was set as cut-off value to divide STAD cohort into two groups (high vs low). The survival difference was detected with a Kaplan-Meier analysis using TCGA STAD and GSE62254 dataset. Log-rank test was conducted to calculate the p-values and hazard ratios (HRs) with 95% confidence intervals (CIs). All analytical methods above were conducted with R software. Moreover, univariate and multivariate Cox regression analyses were conducted to find out the appropriate factors to construct a nomogram, which could be utilized to compute the prognostic risk for STAD patients.

After approved by the Ethics Committees of Second Affiliated Hospital of Nanchang University, STAD tissues (n = 46) and the corresponding gastric tissues (located 2 cm away from STAD lesions) were obtained from patients and each patient had received and told the informed consent. None of patients receive treatment before operation. Total RNA of tissues and qRT-PCR were conducted as described of our study before [11]. Supplementary Table 1 presented the primer sequences. The difference of PER1/NR1D1 expression and the prognosis of PER1/NR1D1 in STAD were evaluated with Student's t-test and Kaplan-Meier analysis. 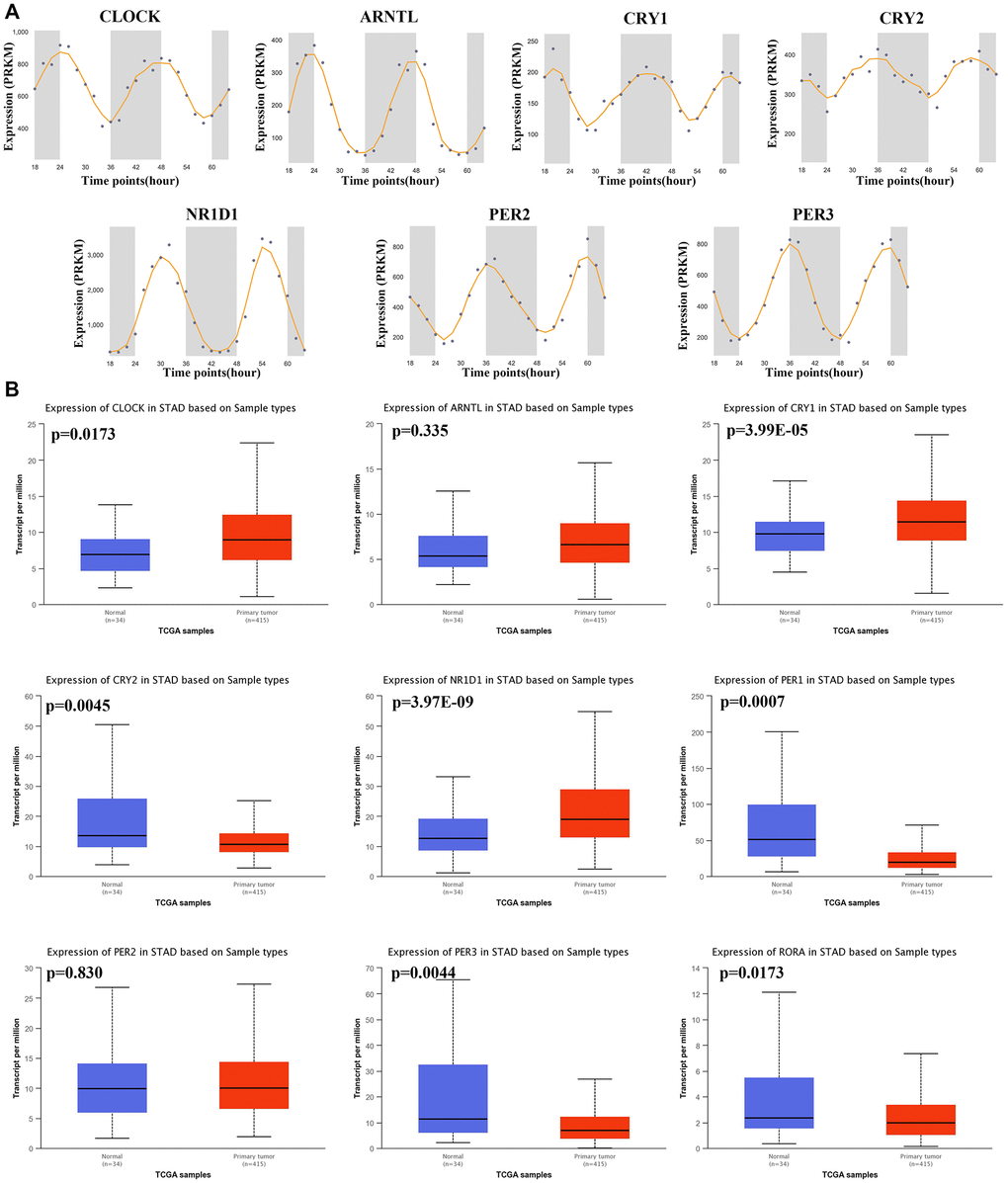 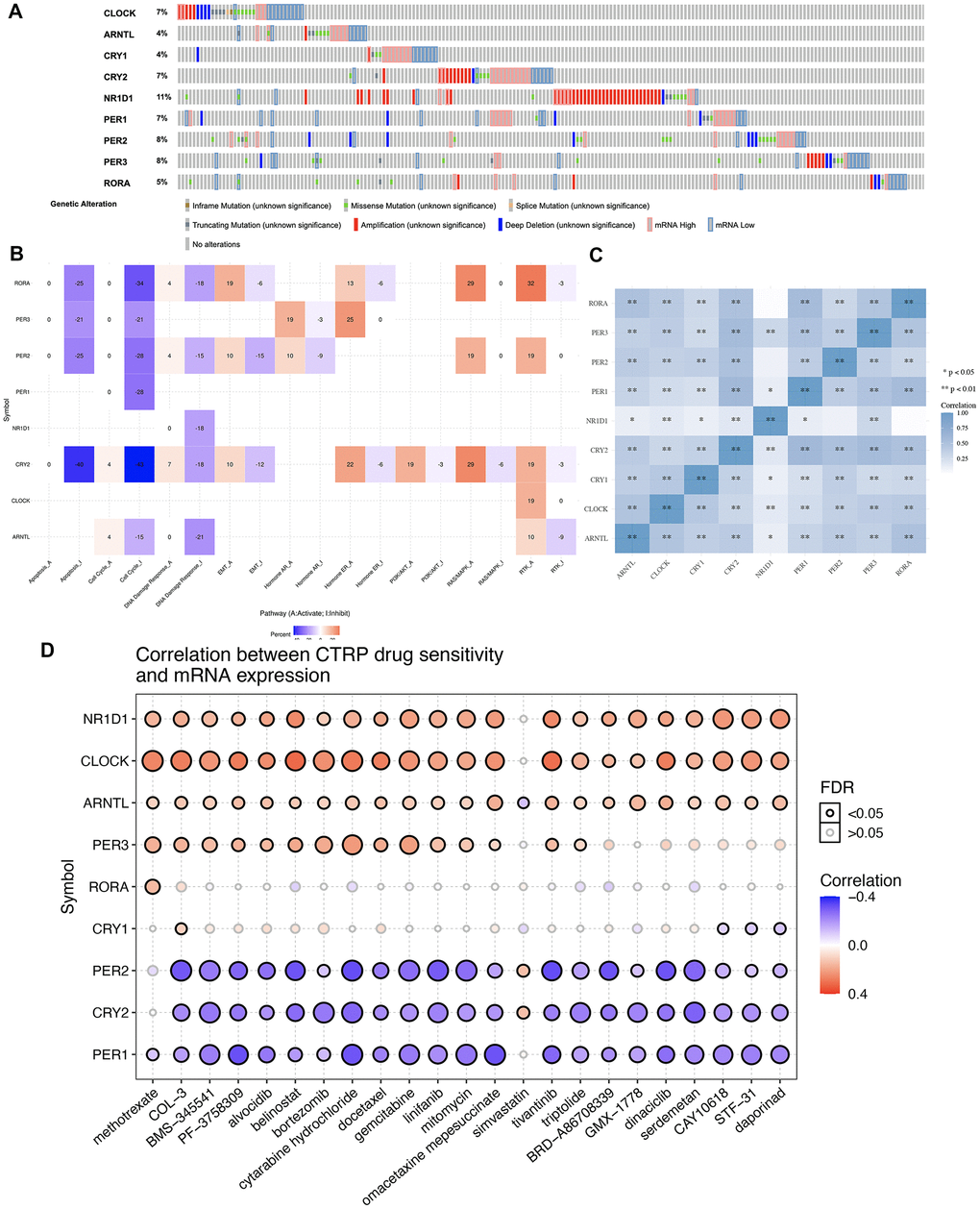 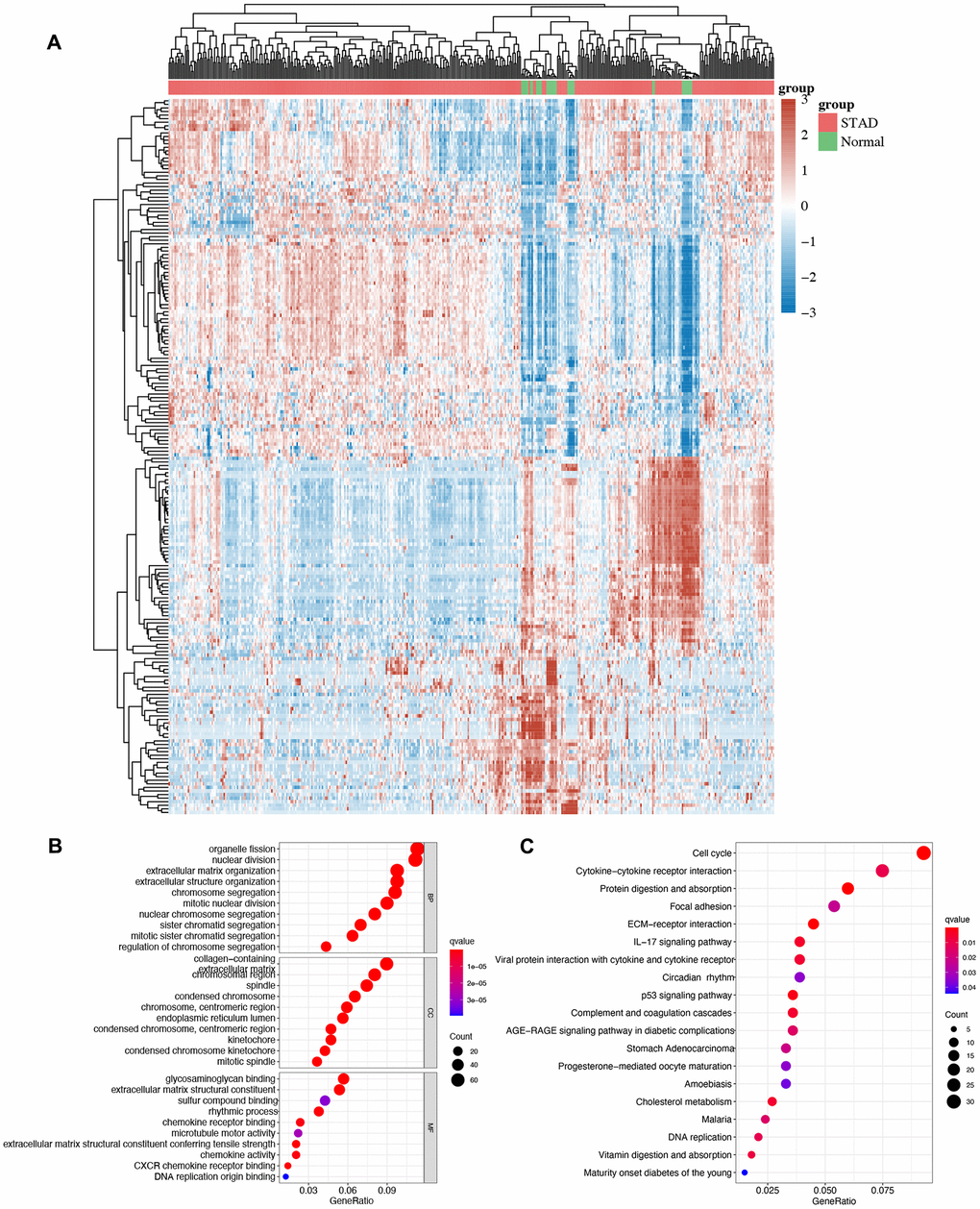 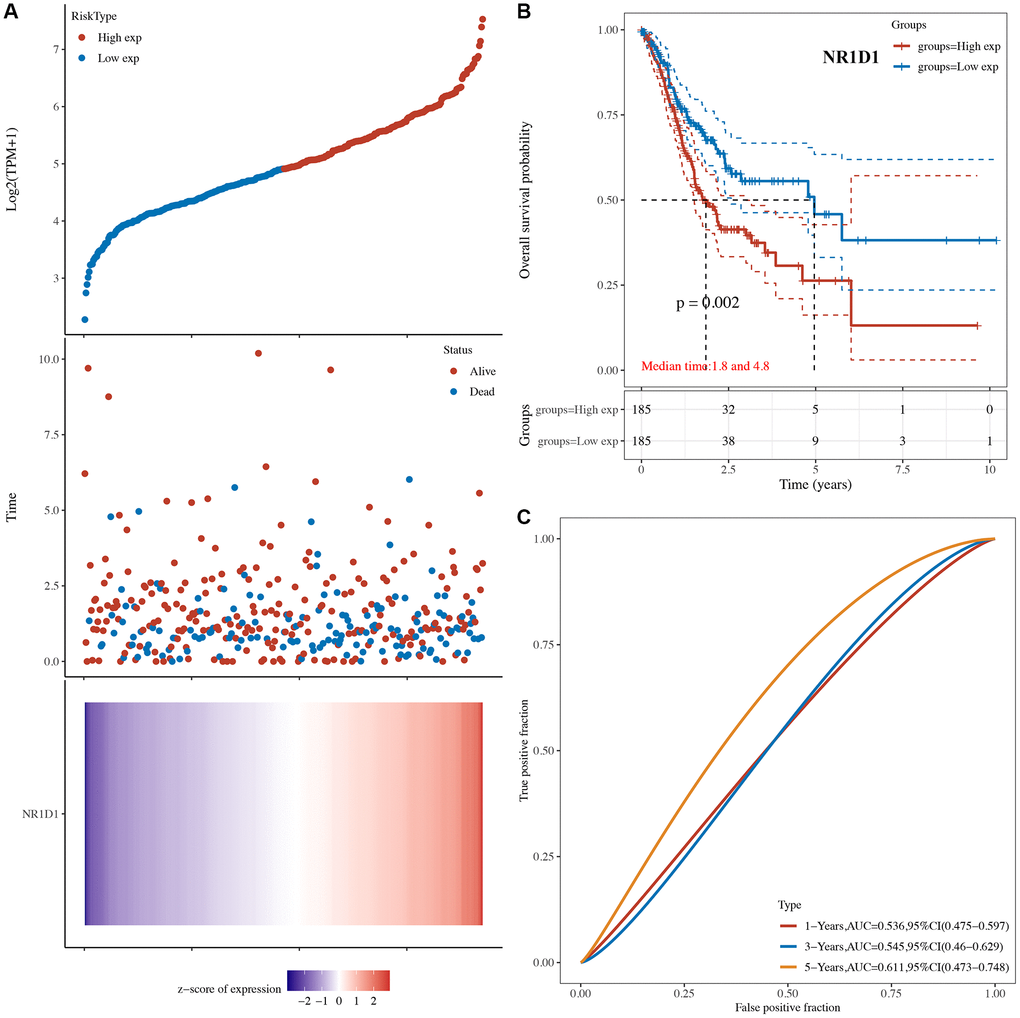 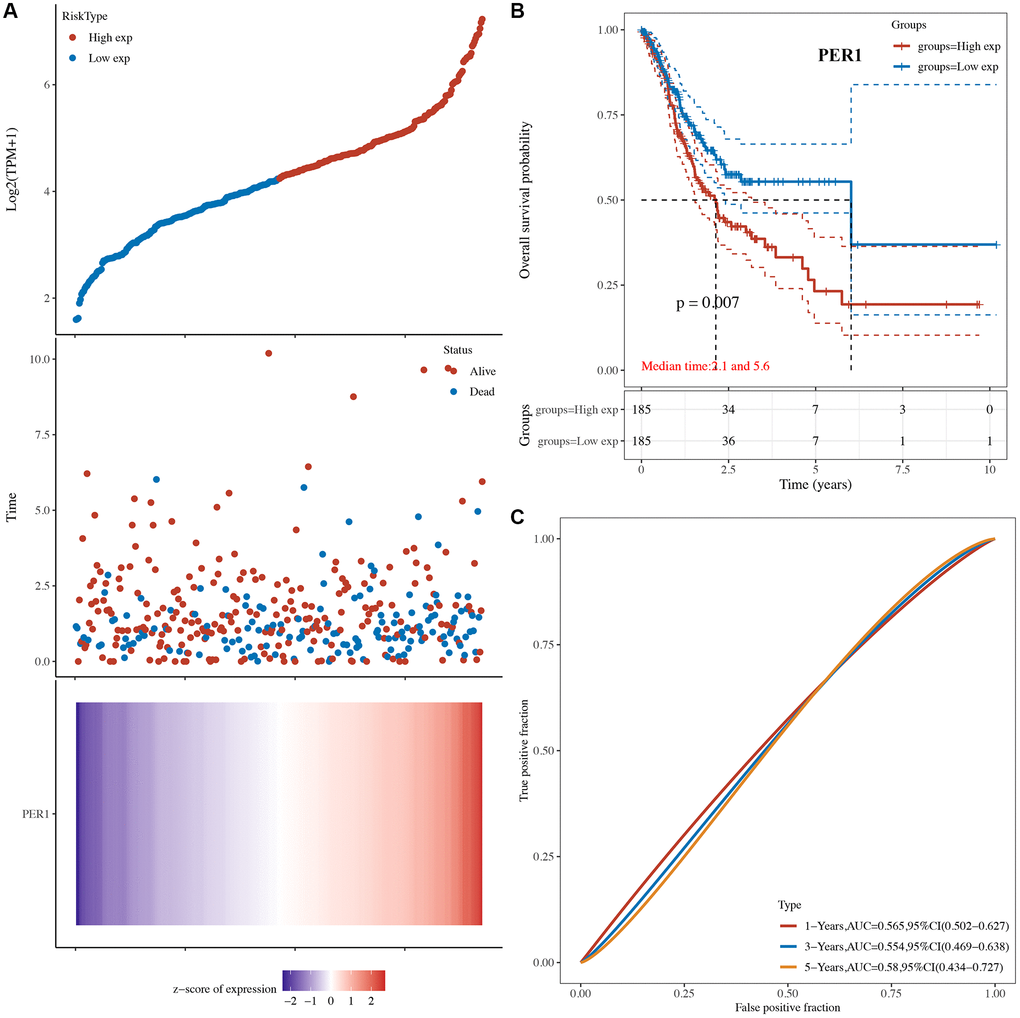 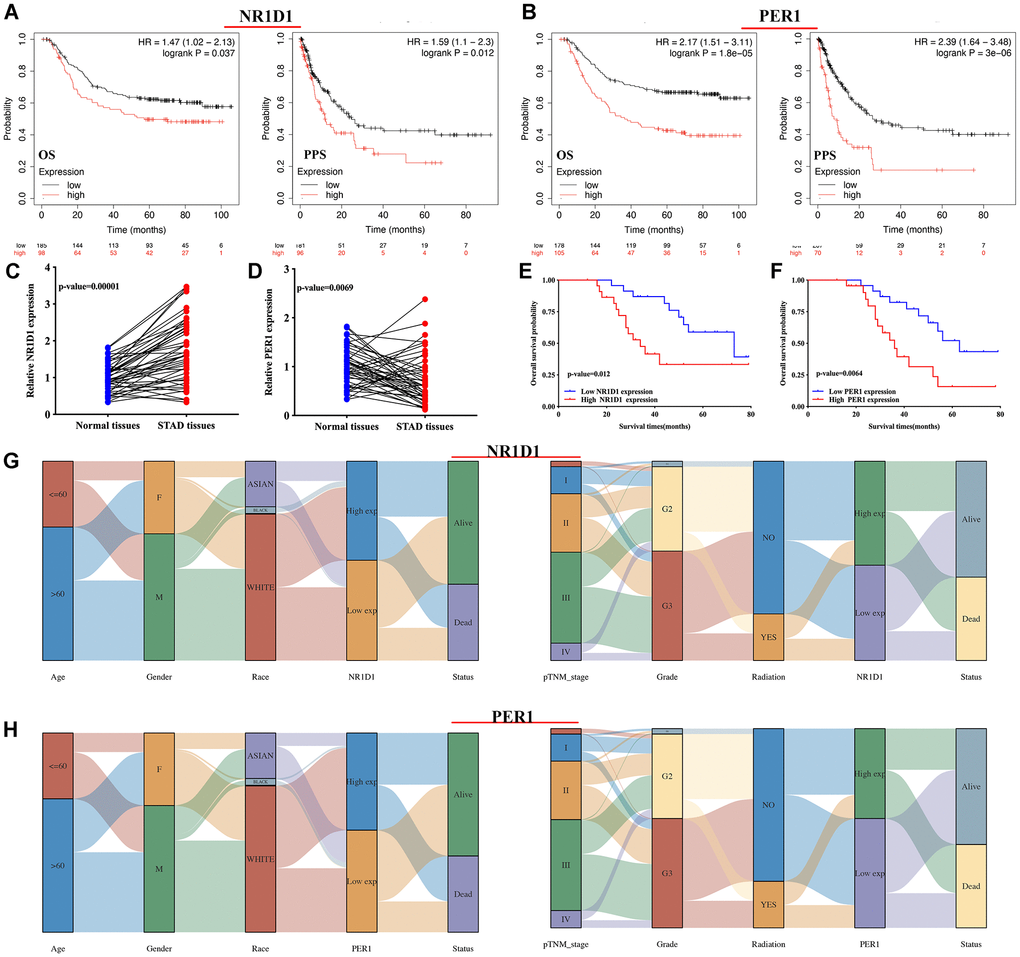 Validation of the expression and prognostic value

Clinical tissues were used to further detect the mRNA level and prognostic significance of PER1/NR1D1 in STAD. Not surprisingly, NR1D1 expression was increased in STAD (Figure 6C, p = 0.00001) while PER1 expression was decreased in STAD tissues (Figure 6D, p = 0.0069) compared with that in normal tissues. Moreover, As shown in Figure 6E and Figure 6F, prognosis analysis suggested a poor overall survival in STAD patients with high NR1D1 expression (p = 0.012) and PER1 expression (p = 0.0064), These data further verified above results.

The expression of NR1D1 and PER1 in STAD patient subtypes

The above results (result 3.4 and result 3.5) revealed that NR1D1 and PER1 may serve as prognostic biomarkers in STAD and are predictors of poor patient prognosis. Thus, NR1D1 and PER1 were selected for further analysis. We then analyzed the association between NR1D1/PER1 expression and clinicopathologic features. As shown in Figure 6G, STAD patients with high pTNM stage and high tumor grade had low NR1D1 expression compared with that of patients with low pTNM and low tumor grade. The PER1 results are presented in Figure 6H. Male STAD patients and patients with high tumor-grade had low PER1 expression.

NR1D1/PER1 were correlated with immune infiltration in STAD 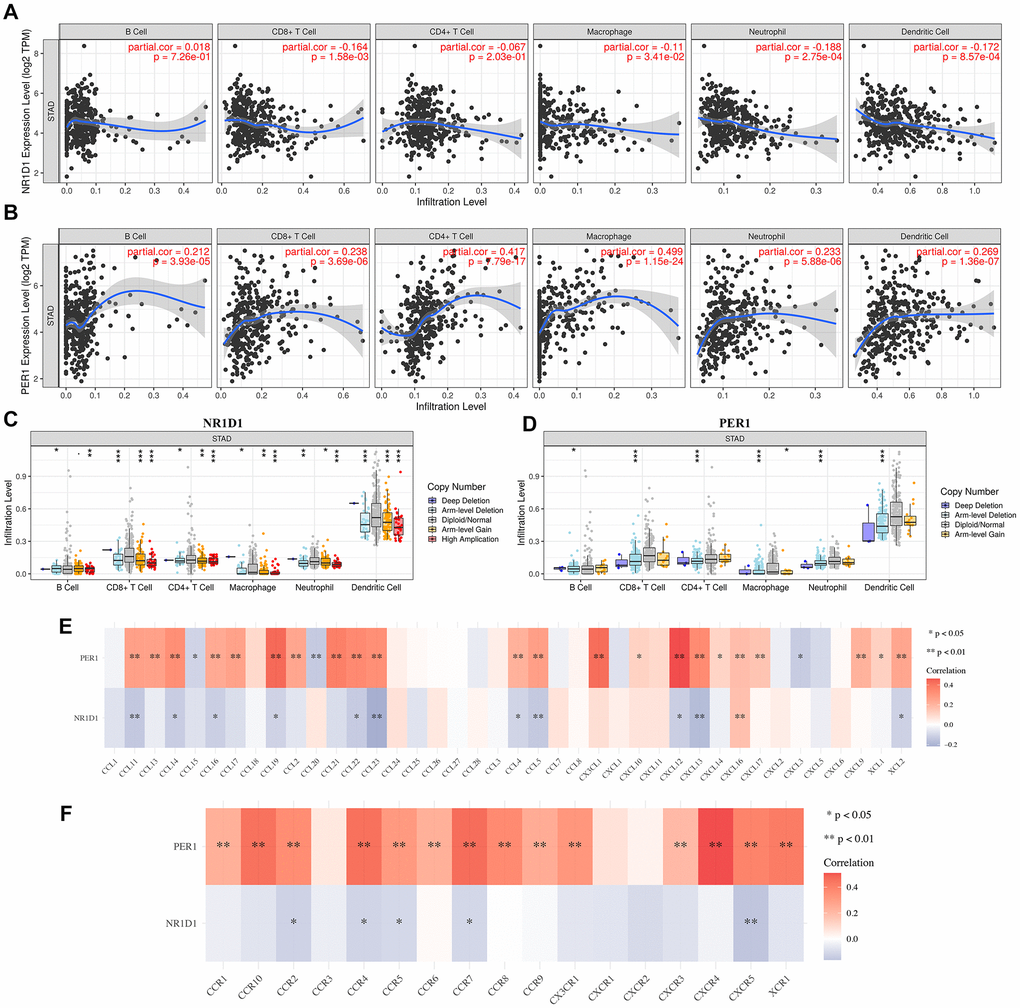 Additionally, we sought to calculate the association between NR1D1/PER1 expression and immune cell markers. As shown in Table 2, NR1D1 expression was correlated with certain biomarkers of these immune cells, while PER1 expression showed a positive correlation with most of the biomarkers of these immune cells (Table 2). Chemokines and their receptors modulate immune surveillance in oncogenesis, metastasis, and response to immunotherapy [15]. In our study, the correlation analysis demonstrated a strong correlation between PER1/NR1D1 and chemokines as well as chemokine receptors (Figure 7E–7F). These data demonstrated the possible correlation between the circadian clock and immune infiltrates in STAD.

Table 2. Correlation analysis between NR1D1/PER1 and gene biomarkers of immune cells in STAD.

As a vital regulator of human physiology, the circadian clock exerted a vital function in the regulation of oscillations in biological processes and behaviors [16]. Increasing data have suggested that circadian disruption is an independent risk factor for cancer [17, 18]. Moreover, previous study indicated certain core circadian clock genes as prognostic biomarkers in cancers [19]. However, the specific functions of circadian clock in the prognosis and therapy of STAD is still unclear. Therefore, the aim of this study was to clarify the role of the circadian clock in STAD using multiomics tools.

Interestingly, our results showed that these genes were linked to the activity of certain oncogenic pathways, including the apoptosis and cell cycle pathway. A previous study revealed cross-talk between the circadian clock and the cell cycle as well as apoptosis in cancer [21]. The results of another study suggested that circadian clock and cell cycle systems are robustly phase-coupled in a bidirectional manner [22]. In our study, core circadian clock genes had an inhibitory effect on the apoptosis pathway, cell cycle pathway, and DNA damage response pathway, which may promote the carcinogenesis and progression of STAD. This finding further confirmed circadian disruption as an independent risk factor for cancer [17].

Another crucial result of the current study was that NR1D1 and PER1 served as potential prognostic markers in STAD and are associated with poor prognosis in STAD patients, including OS, PFS and DFS rates. Univariate and multivariate analyses demonstrated that NR1D1, PER1, pT stage, and pM stage were independent factors affecting the prognosis of STAD patients. In addition to STAD, core circadian clock genes were suggested to be prognostic markers in other malignancies. In breast cancer patients with chemotherapy, NR1D1 is a prognostic marker predicting good prognosis [23]. Moreover, lower mRNA of PER1, PER2 and PER3 are linked to poor overall survival rates in lung cancer patients, indicating that these genes are prognostic markers [24]. Bo et al. suggested that CLOCK is a biomarker in hepatocellular carcinoma that predicts poor prognosis [25].

Interestingly, our study also revealed a conspicuous pertinence between the level of NR1D1/PER1 and immune cells, immune biomarkers, chemokines and chemokine receptors. NR1D1 and PER1 were significantly linked to the immune infiltration level of immune cells. A previous study found that CD4(+) T helper (T(H)17) cell differentiation is regulated by the circadian clock [26]. Our result was also inconsistent with the data of a previous study showing that circadian expression of clock genes was linked to the infiltration level of macrophages, dendritic cells, and B cells [26]. Our study also revealed associations between core circadian clock genes and immune biomarkers, chemokines and chemokine receptors, which play a vital role in the immune response and tumor microenvironment. These data demonstrated the possible association between the circadian clock and immune infiltrates in STAD.

There is no doubt that our study had some limitations. First, STAD-related core circadian clock gene information was only retrieved from the literature, and the information obtained may not be comprehensive. Moreover, it would be beneficial to verify our results with in vitro and in vivo experiments.

Overall, in this study, a comprehensive analysis of the prognostic value and immune-related function of core circadian clock genes in STAD was performed, and our results suggested that NR1D1 and PER1 serve as prognostic biomarkers and are associated with immune infiltration in STAD.

Our research was approved and supported by an ethics committee of the Second Affiliated Hospital of Nanchang University. All patients provided informed consent.

The analyzed data sets generated during the study are available from the corresponding author on reasonable request.