* Equal contribution
# ADNI data used in preparation of this article were obtained from the Alzheimer’s Disease Neuroimaging Initiative (ADNI) database (adni.loni.usc.edu). As such, the investigators within the ADNI contributed to the design and implementation of ADNI and/or provided data but did not participate in analysis or writing of this report. A complete listing of ADNI investigators can be found at: http://adni.loni.usc.edu/wp-content/uploads/how_to_apply/ADNI_Acknowledgement_List.pdf

Copyright: © 2021 Hsieh et al. This is an open access article distributed under the terms of the Creative Commons Attribution License (CC BY 3.0), which permits unrestricted use, distribution, and reproduction in any medium, provided the original author and source are credited.

Recent GWAS have identified more than 20 AD susceptibility loci, including CR1, CLU, PICALM, BIN1, CD2AP, CD33, EPHA1, MS4A6A/MS4A4E, SORL1, GAB2, ABCA7, etc [11–18]. However, most of these studies have conducted in Caucasian population and data about the genetics of AD from other populations has been relatively limited [10]. In Han Chinese or Asian population, common variants in GCH1, KCNJ15 [19], and rare missense variant in the C7 genes [20] were also identified by whole-genome sequencing and whole-exome sequencing studies. In our previous studies, we identified ABCA7 rs3764650 and SORL1 rs1784933 as being associated with the risk of AD in Han Chinese individuals in Taiwan [7, 21], the association between BIN1 rs744373 and AD was reported in Asian populations [8], but the effect of these AD risk genes on the rate of cognitive decline is not clear. In this study, we used a data-driven trajectory analysis to examine the influence of selected AD risk genes on the age for and the rate of cognitive decline in the Han Chinese population.

Table 1. Baseline demographics and genetic characteristics of the study participants.

To assess which variable provided the best fit to the longitudinal data from the MMSE, we then implemented a Bayesian variable selection using the Gibbs variable selection method. The results of model selection among the eight genetic markers are summarized in Table 3. Sex and education variables were included in each model. The results revealed that, compared with other models, the APOE gene and SORL1 rs3737529 in model 1 had the best fit to the data based on posterior model probabilities. We again evaluated these two genetic markers in the Bayesian hierarchical model. Significant associations and estimated directions were consistent with the full model that included all genetic markers (Table 4). Moreover, to check the fitness of a Bayesian model, we then calculated a posterior predictive p-value. The value was 0.937, which indicated that the fitted model was adequate to describe longitudinal data from the MMSE.

Table 3. Model selection among the eight genetic markers after adjusting for sex and education years (n = 299). 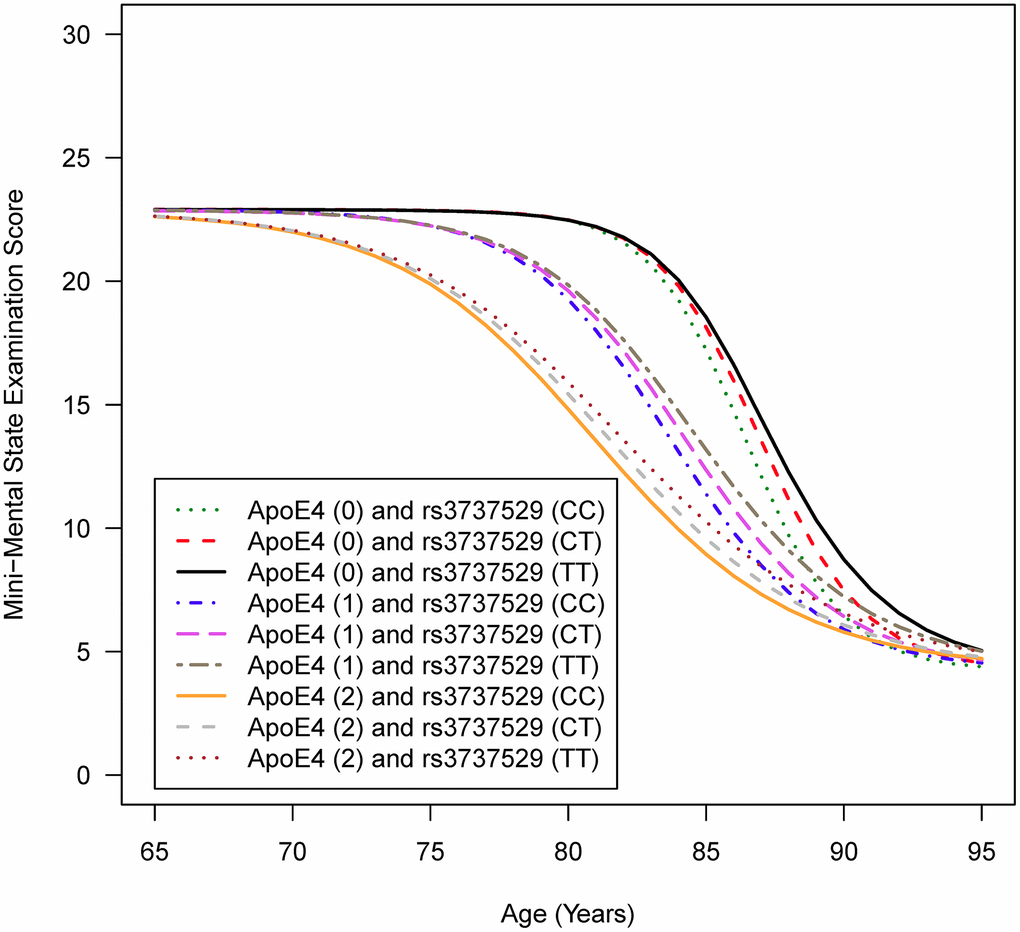 Figure 1. Mean trajectories of cognitive function for individuals carrying specific genotypes in the APOE gene and SORL1 rs3737529 SNPa. AIn the figure legend, ApoE4 (0/1/2) means that individuals are carrying zero, one, or two copies of the ε4 allele in the APOE gene; rs3737529 (CC/CT/TT) means that individuals are carrying the CC, CT, or TT genotypes in SORL1 rs3737529. Note: The full sample of 255 AD and 44 MCI patients at baseline were analyzed.

ABCA7 is an ATP-binding cassette transporter protein mainly expressed in microglia and neurons [29, 30]. The functions of ABCA7 include lipid metabolism, regulation of phagocytosis, and amyloid β (Aβ) production and clearance [31]. The minor allele of rs3764650 in ABCA7 was associated with increased neuritic plaque formation [32] and decreased Aβ levels in cerebrospinal fluid [33]. Clinically, the ABCA7 rs3764650 minor allele was associated with cortical and hippocampal atrophy [34] and with a later age at onset and shorter disease duration [35]. In accordance with these findings in previous studies, our study demonstrated that the minor allele of rs3764650 in ABCA7 was associated with an earlier midpoint of cognitive function decline, which suggested that the ABCA7 gene affects the clinical course of AD from the preclinical stage to the dementia stage.

SORL1 encodes a multidomain-containing, membrane-bound receptor involved in endosomal sorting of proteins between the trans-Golgi network, endosomes and the plasma membrane [36]. In AD, the SORL1 encoded receptor interacts with the amyloid precursor protein (APP) and the Aβ peptide [37], participating in APP trafficking and processing and Aβ destruction [38]. Previous studies have also shown that two SORL1 polymorphisms (rs3824968-A allele and rs2282649-T allele) were related to decreased cerebrospinal fluid (CSF) concentrations of Aβ42 and Aβ40 [39], the rs2070045-G allele was associated with increased CSF tau and more hippocampal atrophy [40], and SORL1 rs11218343 was associated with cognitive performance [41]. In our previous study, SORL1 rs1784933 and rs2298813 were associated with AD and MCI risk in the Han Chinese population in Taiwan [21], and in the present study, SORL1 rs3737529 was associated with the midpoint and the rate of cognitive decline in AD and MCI patients in Han Chinese population. These results suggest that SORL1 plays many different roles in AD pathogenesis that are significantly related to clinical manifestations. The associations between ABCA7 as well as SORL1 and cognitive function decline were found in Han Chinese population, but not in the ADNI data. It might also suggest that these risk genes may act differently in different populations [6–9].

There are some limitations in this study. First, no other cohort can validate our findings in Taiwan currently. Other longitudinal follow-up studies need to be conducted to test these results. Second, the diagnoses of MCI and AD were made according to the clinical criteria without biomarker evidence of Aβ and tau, which may have influenced the diagnostic accuracy. Third, we used the MMSE to evaluate longitudinal cognitive changes, which might underestimate cognitive decline. Forth, we only tested a limited number of SNPs based on the evidence of significant genetic association in some previous studies. Other SNPs may also be associated with the trajectory of cognitive decline, and the genetic effects might be different in different populations. Finally, the sample size of our cohort is relatively small compared to the other longitudinal cohort (such as ADNI cohort). This may limit the generalizability of our findings to general population.

Participants were recruited from two teaching hospitals in the Biosignature Study of Alzheimer’s Disease (BSAD). The BSAD is carried out as a subproject of Taiwan Biobank [42] and has been designed as a prospective longitudinal follow-up study at 1-year intervals since 2012 to identify potential biomarkers for early diagnosis of AD in the Han Chinese population. The collected data included patients’ neuropsychological test outcomes, blood biomarkers, brain magnetic resonance imaging, and related clinical characteristics. Overall, 255 AD patients and 44 mild cognitive impairment (MCI) patients with at least four measurements were selected for modeling trajectories of cognitive function decline. For the 44 MCI patients at baseline, 28 patients (63.6%) would progress to AD during the consecutive follow-up period. An AD diagnosis was made during a multidisciplinary consensus meeting according to the clinical criteria for probable AD described by the National Institute on Aging–Alzheimer’s Association [43]. A diagnosis of MCI was made according to the revised criteria established from the consensus report [44, 45]. The cutoff value for the diagnosis of MCI was set at 1.5 standard deviations below the age-adjusted norm for the logical memory test of the Wechsler Memory Scale III [46]. Other inclusion criteria included an age at onset greater than 60 years and the availability of a caregiver who could provide collateral patient history. The exclusion criteria were significant neurological diseases other than AD that may affect cognition, including Parkinson’s disease, vascular cognitive impairment, normal pressure hydrocephalus, brain tumor, progressive supranuclear palsy, seizure disorder, subdural hematoma, and multiple sclerosis, a history of significant head trauma followed by persistent neurologic deficits, or other known significant structural brain abnormalities. All patients received a standardized evaluation that included a clinical interview, neuropsychological assessment, laboratory tests and brain magnetic resonance imaging. The institutional review boards of each participating hospital approved the protocol and informed consent form for this study. All participants or their legal representatives signed informed consent forms at study participation.

Global cognition was annually assessed using the Mini-Mental State Examination (MMSE) [47], which was carried out to depict the trajectory of cognitive function for each participant. The total scores ranged between 0 and 30, and lower scores revealed poorer cognitive performance. The Clinical Dementia Rating (CDR) [48] was administered to determine the severity of dementia. Additionally, the 12-item memory test, modified 15-item Boston Naming Test, category verbal fluency test, and forward and backward digit span test were used at study entry to assess short-term memory, language, executive function, attention and working memory, respectively. Longitudinal follow-up was performed in AD and MCI patients at one-year intervals with the MMSE and the CDR assessment.

ADNI data used in this study were obtained from the Alzheimer’s Disease Neuroimaging Initiative (ADNI) database (adni.loni.usc.edu) [55, 56]. The ADNI was launched in 2003 as a public-private partnership, led by Principal Investigator Michael W. Weiner, MD. The primary goal of ADNI has been to test whether serial magnetic resonance imaging (MRI), positron emission tomography (PET), other biological markers, and clinical and neuropsychological assessment can be combined to measure the progression of MCI and early AD. For up-to-date information, see http://www.adni-info.org.

To compare with ADNI cohort, a total of 385 ADNI patients in the ADNI-1, ADNI-GO, or ADNI-2 phases—150 with AD and 235 with MCI and then progression to AD—with at least four MMSE measurements and genotypic data were selected to analyze the trajectories of cognitive function decline. Because the three candidate genetic markers—rs3737529 and rs1784933 in SORL1, and rs2373115 in GAB2— were not genotyped in the ADNI-1 and/or ADNI-GO/2 data, we imputed the two datasets separately to the 1000 Genomes Project (1000 Genomes Phase 3 v5 used as the reference panel, SHAPEIT as the phasing, and EUR as the population) using Minimac3 on the Michigan Imputation Server [PMID: 27571263].

For each SNP, Hardy-Weinberg equilibrium was checked using the goodness-of-fit test in AD and MCI subjects. A Bayesian hierarchical model with a four-parameter logistic curve [22] was fitted to depict the trajectories of cognitive function decline for patients with AD or MCI at baseline (n = 299). This model included four major parameters: the asymptotic value of cognitive function at lower ages (A), the asymptotic value of cognitive function at higher ages (B), the age at the midpoint of cognitive function decline (M) between A and B, and the rate of cognitive function decline (R) from A to B. In the model, random effects on parameters A and B were assumed to model the variation between subjects. In addition, to consider the effects of genetic markers, linear combinations of these covariates on parameters M and R were modeled adjusting for sex and education years, and an additive mode of inheritance was assumed to code the number of copies of the minor allele for each genetic marker. The distributions of observed measurements and the prior distributions of model parameters followed the assumption proposed by Sweet et al. [22]. Bayesian inference was based on an initial 2,000 iteration burn-in and a 20,000 iteration run using Gibbs sampling.

To identify an adequate fitting model of genetic markers on trajectories of cognitive function decline, model selection was carried out using Gibbs variable selection [57]. The statistical significance of all tests was evaluated using a 95% credible interval. The adequacy of the fitted Bayesian model to the data was checked by posterior predictive p-value [58]. All Bayesian analyses were performed using the open-source software WinBUGS version 1.4.3 [59]. Besides, not all MCI patients will develop clinically defined AD during the follow-up period. Therefore, we excluded 16 stable MCI patients without progression to AD and used the subset of 283 samples to validate the results obtained from the full samples. In addition, a total of 385 ADNI patients with AD or with MCI and then progression to AD were fitted to validate the trajectories of cognitive function decline obtained from our BSAD patients.

The authors thank the Taiwan Biobank and the Academia Sinica of Taiwan for their technical support for this work.