Chronic intermittent hypoxia (CIH), a hallmark of obstructive sleep apnea (OSA), is associated with various cardiovascular diseases. In the present study, we assessed the effect of the lipid reducing agent atorvastatin on CIH-induced myocardial oxidative stress and apoptosis in a mouse OSA model. Forty-eight C57BL/6J mice were evenly divided among normoxia + vehicle, normoxia + atorvastatin, CIH + vehicle, and CIH + atorvastatin groups. CIH consisted of a hypoxia-reoxygenation cycle in which oxygen concentrations fluctuated from 21% to 6% and back over two minutes for 8 hours each day (30 events/hour). CIH exposure continued for 12 weeks. Atorvastatin (5 mg/kg) was administered from week 6 through the end of the experiment. CIH increased malondialdehyde levels and decreased superoxide dismutase activity, total antioxidant capacity, and nuclear factor erythroid 2-related factor 2 levels in cardiac tissue, indicating a reduction in antioxidant activity. Atorvastatin significantly reversed those effects (p < 0.05). CIH also increased B-cell lymphoma 2-associated protein X and cleaved caspased-3 levels as well as the myocardial apoptotic rate, as indicated by terminal deoxynucleotidyl transferase dUTP nick-end labeling. Atorvastatin had no effect on those changes (p > 0.05). Thus, atorvastatin administration exerts antioxidant but not anti-apoptotic effects after CIH and may therefore have therapeutic potential in OSA patients with cardiovascular comorbidities.

Statins, which inhibit 3-Hydroxy-3-methylglutaryl coenzyme A reductase (HMG-CoA) activity, are widely used in the treatment of dyslipidemia and to decrease the severity of other cardiovascular events in patients with coronary heart disease. More recently, pleiotropic protective effects of statins, including antioxidant, pro-apoptosis, and anti-inflammatory effects in vascular tissue, have been described [1–3]. These findings indicate that statins may have additional therapeutic uses.

Obstructive sleep apnea (OSA), which is characterized by recurrent partial or complete collapse of the upper airway during sleep, is characterized by pathophysiological chronic intermittent hypoxia (CIH) and sleep fragmentation [4]. The overall prevalence of OSA among the general population is about 6–17% [5], and the incidence and mortality of cardio-cerebrovascular diseases is significantly increased among OSA patients. Our previous study confirmed that, independent of obesity, OSA is closely associated with dyslipidemia and hypertension [6]. In another of our previous studies, high renal apoptotic rates were detected after CIH exposure [7], while oxidative stress was increased in CIH-treated mice [8]. Treatments that reduce oxidative stress and apoptosis might therefore be useful therapies for those with OSA. Atorvastatin has been identified as a potential treatment for OSA. Deng and co-workers [9] showed that atorvastatin can reduce CIH-induced hippocampal neuron damage through the toll-like receptor 4 (TLR4) signaling pathway. Atorvastatin was also found to prevent deleterious IH-induced cardiovascular effects, including increased systolic pressure, changes in carotid artery compliance and endothelial function, increased NADPH, and decreased aortic superoxide dismutase activity [10]. Myocardial damage caused by CIH was also ameliorated by administration of atorvastatin [11].

Because OSA is a chronic disease, associated intermittent hypoxia in affected individuals should also be chronic. However, previous studies have used relatively short CIH durations. In this study, we examined the effects of 12 consecutive weeks of CIH on myocardial oxidative stress and apoptosis, as well as the effects of atorvastatin on these physiological changes, in a mouse model to more accurately assess the pathophysiological features of OSA.

As shown in Figure 1, body weights in the CIH group tended to be lower than those of normoxia group mice in the last three weeks of the experiment, but this trend did not reach statistical significance (p > 0.05). There were no significant differences in any lipid profiles between the normoxia + vehicle and CIH + vehicle groups (all p > 0.05, Table 1). Atorvastatin significantly decreased serum TC levels both in the normoxia and CIH conditions (all p < 0.05), but no other lipid profile differences were observed among the groups (Table 1). ALT and AST levels tended to be slightly higher in groups that received atorvastatin (Normoxia + atorvastatin and CIH + atorvastatin) than in those that didn’t (Normoxia + vehicle and CIH + vehicle), but these trends also did not reach statistical significance (p > 0.05, Table 1).

HE staining was performed to observe histopathological changes in myocardial architecture. No abnormal myocardial tissue features were observed in any of the groups under 100× or 400× magnification (Figure 2). 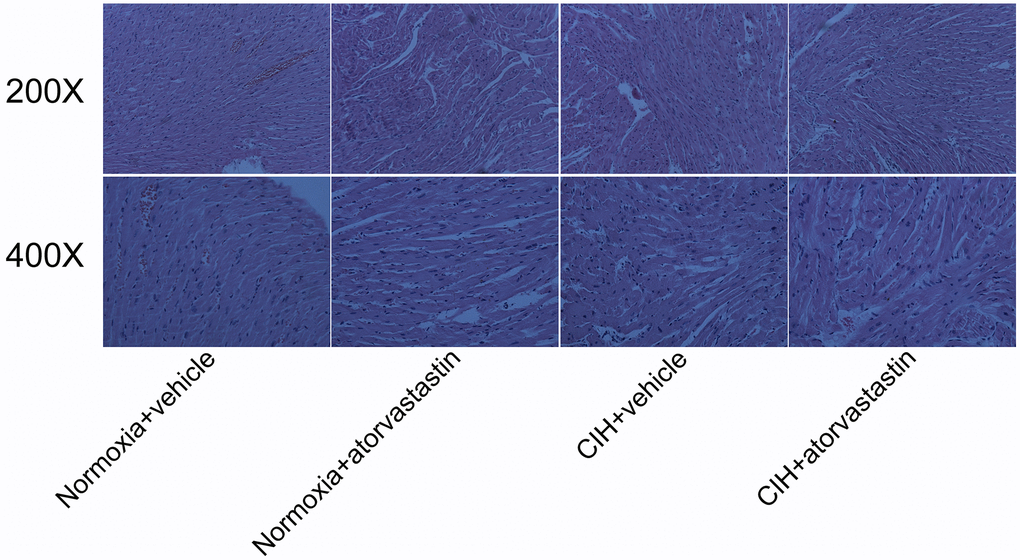 Figure 2. Histopathological examination of myocardial tissue. No abnormal architectural features were observed in myocardial tissue using a microscope at different magnifications in any group.

Table 2. Main and interaction effects of CIH and atorvastatin on oxidative stress parameters. 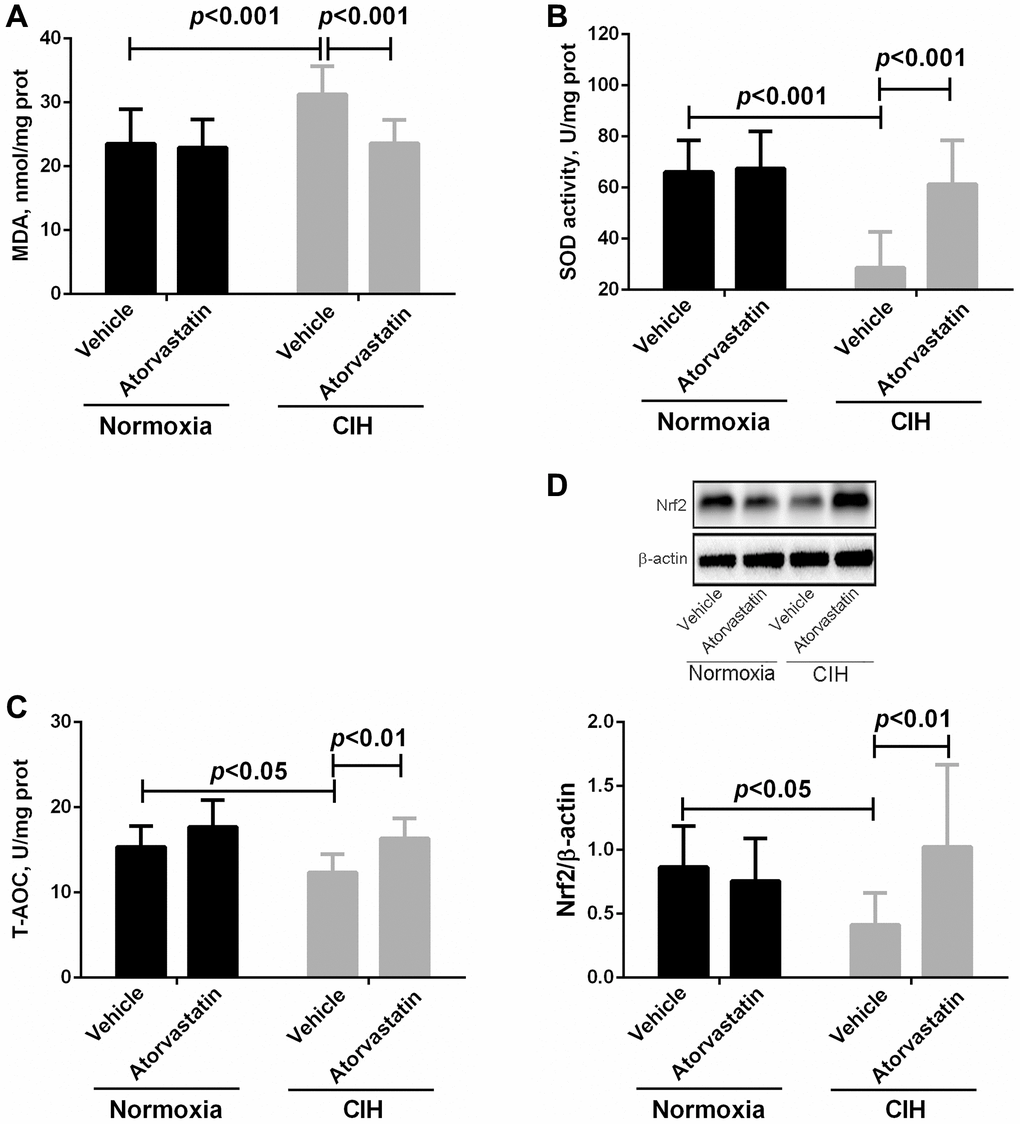 Table 3. Main and interaction effects of CIH and atorvastatin on apoptotic parameters. 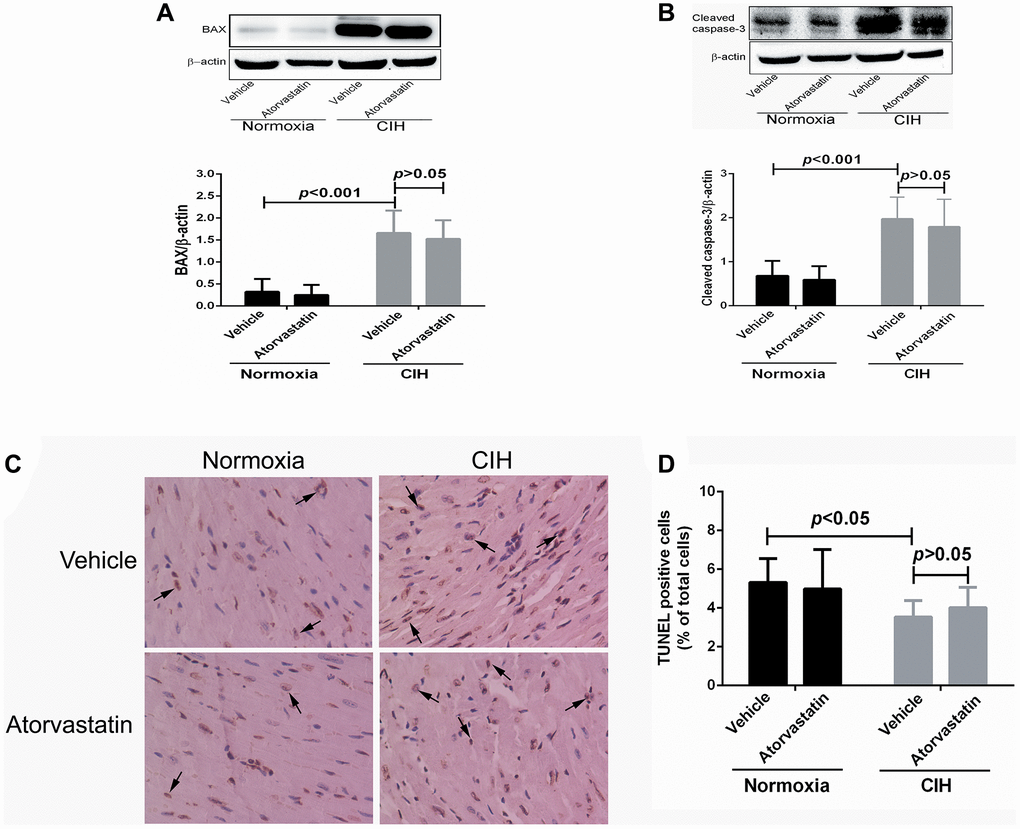 In this study, we created a mouse model that was exposed to 12 consecutive weeks of CIH to mimic pathophysiological changes that accompany OSA. Our results confirmed that CIH promoted myocardial oxidative stress and apoptosis. In addition, atorvastatin attenuated CIH-induced oxidative stress, but had no influence on apoptosis.

Because CIH is closely associated with oxidative stress, inflammation, and apoptosis, the therapeutic effects of atorvastatin on animal models of OSA or CIH have received much attention. In 2013, Totoson et al. [10] reported that atorvastatin (10 mg/kg/d) administration reversed deleterious cardiovascular consequences, such as increased blood pressure, myocardial infarction hypersensitivity, and oxidative stress, and changes in endothelial function and carotid artery wall structure, in a CIH-induced rat model. Yuan and colleagues [11] found that atorvastatin (20 mg/kg/d) can attenuate TLR4/myeloid differentiation primary response protein 88-mediated inflammation and oxidative stress, thereby ameliorating CIH-induced myocardial injury. In a subsequent study, the same team found that atorvastatin (5 mg/kg/d) also reduced CIH-induced hippocampal neuronal injury in part through the TLR4 signaling pathway [9]. Ren and colleagues [20] reported that atorvastatin attenuated CIH-induced myocardial hypertrophy partly via the miR-31/PKC epsilon pathway in vitro. However, a multicenter randomized controlled clinical trial reported that, despite reduced blood pressure and lipid profile levels, 3 months of atorvastatin administration neither improved endothelial function nor reduced signs of atherosclerosis in OSA patients [21]. In the present study, we confirmed that atorvastatin attenuated myocardial oxidative stress after 12 consecutive weeks of CIH exposure. The antioxidant effects of atorvastatin included decreased MDA levels and increased SOD activity, T-AOC, and Nrf2 levels in mice subjected to CIH. However, in contrast to previous findings, atorvastatin did not affect CIH-induced myocardial apoptosis in our current study. Furthermore, the exact mechanisms underlying the effects of atorvastatin on CIH-induced pathophysiological changes remain unclear and require further investigation. Regarding hepatic toxicity of atorvastatin, although we observed slightly higher ALT and AST levels in atorvastatin-treated groups, those differences did not reach statistical significance. This relative lack of hepatic toxicity may be due at least in part to the lower dose we used in this study compared to those used in previous studies [10, 11, 22].

Several limitations of the present study should be considered when interpreting the results. Firstly, echocardiography, which is an important approach for evaluating cardiac structure and function, was not used here. Second, we did not examine potential molecular mechanisms that might explain the relationships between atorvastatin, CIH, and myocardial oxidative stress; additional studies are therefore required. Third, and similarly to previous animal studies [9–11, 23], only one atorvastatin dose was administered here, precluding our ability to examine dose-dependent effects of atorvastatin on IH-induced myocardial oxidative stress and hepatic toxicity.

In conclusion, we established a mouse model exposed to 12 consecutive weeks of CIH to more closely mimic OSA in this study. We found that atorvastatin treatment alleviated CIH-induced myocardial oxidative stress, but not apoptosis. These results provide new insights into the potential therapeutic benefits of atorvastatin treatment in OSA patients, especially those with cardiovascular comorbidities.

Forty-eight 7-week-old male C57BL/6 mice were purchased from the Chinese Academy of Science Laboratory Animals Center in Shanghai, China. All mice were kept in a departmental animal house on a 12:12-hour light-dark cycle with free access to water and food. The experiment was conducted for 12 consecutive weeks to create a more realistic CIH model. The body weight of each mouse was measured and recorded once per week. Mice were randomly assigned to one of four groups (n = 12 in each group): normoxia + vehicle, normoxia + atorvastatin, CIH + vehicle, or CIH + atorvastatin. The experimental procedure was approved (approval number 2018-015) by the Ethics Committee of Zhongshan Hospital, Xiamen University and was conducted according to the Guide for the Care and Use of Laboratory Animals [24].

The CIH exposure protocol was performed as described in our previous studies [25, 26] with some modifications. Briefly, CIH-exposed mice were placed in a plexiglass chamber with one-way valves. Three gases (oxygen, nitrogen, and compressed air) which were controlled by a programmable instrument, flowed into the chamber constantly. The oxygen saturation in the chamber fluctuated from 21% to 6–8% and back in one two-minute hypoxia-reoxygenation cycle, for a total of 30 events per hour. Normoxia-exposed mice were placed in the same chamber but were exposed to the air in the room without manipulation. The CIH protocol was conducted from 09:00 to 17:00 daily for 12 consecutive weeks.

After the final CIH exposure, mice were deeply anesthetized and exsanguinated by cardiac puncture. After blood samples were collected and centrifuged, serum from the supernatant was stored for further analysis. The myocardial tissue of the left ventricle was excised and either stored at –80°C or fixed in buffered 10% formalin for future examination. Fresh myocardial tissues were homogenized with ice-cold radioimmunoprecipitation (RIPA) lysis buffer (Beyotime, Beijing, China). After centrifuging, protein concentrations in the supernatants were measured in a bicinchoninic acid protein assay (Beyotime, Beijing, China).

Malondialdehyde (MDA) levels, superoxide dismutase (SOD) activity, and total antioxidant capacity (T-AOC) were measured to evaluate antioxidant activity. All oxidative stress parameters were assayed in the homogenates of myocardial tissues according to the kit manufacturer’s instructions (Beyotime, Beijing, China). Briefly, MDA was evaluated spectrophotometrically by measuring amounts of thiobarbituric acid-reactive substances. SOD activity was detected using an assay kit which used a thiazole salt that produces a colored product in the presence of superoxide anions. T-AOC was analyzed using a colorimetric method based on the ferric-reducing ability of antioxidants. Absorbance values for MDA, SOD activity, and T-AOC assays were measured at wavelengths of 535 nm, 560 nm, and 593 nm, respectively.

After overnight fixation in formalin, myocardial tissues were dehydrated with alcohol, cleaned with xylene, and then embedded in paraffin. Five μm-thick slices were obtained and stained with HE. The TUNEL assay was carried out using the in-situ Cell Death Detection Kit, AP (Roche Diagnostics, Shanghai, China) according to the manufacturer’s instructions. TUNEL-positive cell numbers in the visual field were counted at ×400 magnification. The apoptotic rate was calculated as follows: TUNEL-positive cell number/total cell number × 100%. A Leica DM2500 microscope was used to visualize staining, and images were photographed at ×200 and ×400 magnification.

SPSS software 23.0 (SPSS Inc., Chicago, IL, USA) and GraphPad Prism 5.0 (GraphPad Software, Inc., La Jolla, CA, USA) were used for statistical analysis and to make figures. Data are expressed as means ± SD. Two-way analysis of variance (ANOVA) followed by Dunnett post hoc tests were conducted for multiple comparisons between groups; main effects and interaction effects of week and CIH on bodyweight, as well as of CIH and atorvastatin on oxidative stress and apoptotic variables, were analyzed. A p value <0.05 was considered statistically significant.

This study was approved by the Ethics Committee of Zhongshan Hospital, Xiamen University (approval number 2018-015).

All data generated or analyzed during this study are included in this published article.