Copyright: © 2021 Cai et al. This is an open access article distributed under the terms of the Creative Commons Attribution License (CC BY 3.0), which permits unrestricted use, distribution, and reproduction in any medium, provided the original author and source are credited.

The contents of AHNAK are decreased in cancers, and AHNAK negatively modulates cell growth, as well as work as a tumor repressor via potentiation of TGFβ signaling [3, 4]. Moreover, studies have recently found that AHNAK is pivotal in cell migration along with infiltration in an extensive range of cancers [5]. The knockdown of AHNAK resulted in reduced the dynamics of actin cytoskeleton and activation of MET (mesenchymal-epithelial transition) [6]. Besides, it is believed that the Canonical Wnt cascade is linked to cancer progress, especially with cell migration along with infiltration [7]. Canonical Wnt is recognized to accelerate EMT. Canonical Wnt is hyper-activated in metastatic breast cancer cells [8]. In colorectal cancer, the Canonical Wnt cascade participates in enhanced EMT, cell migration, and cancer cell metastasis [9]. Nevertheless, the function of AHNAK and Canonical Wnt cascade in ovarian cancer is poorly characterized at present.

Herein, we investigated and verified the content of AHNAK in ovarian cancer tissues and corresponding healthy tissues. We demonstrated that AHNAK content was lower in ovarian cancer in contrast with the non-malignant tissues. Elevated levels of AHNAK dramatically repressed ovarian cancer cell progression and metastasis in vitro as well as in vivo. Moreover, AHNAK suppressed the progress of ovarian cancer partly via inactivating the Canonical Wnt cascade.

AHNAK is downregulated in ovarian cancer 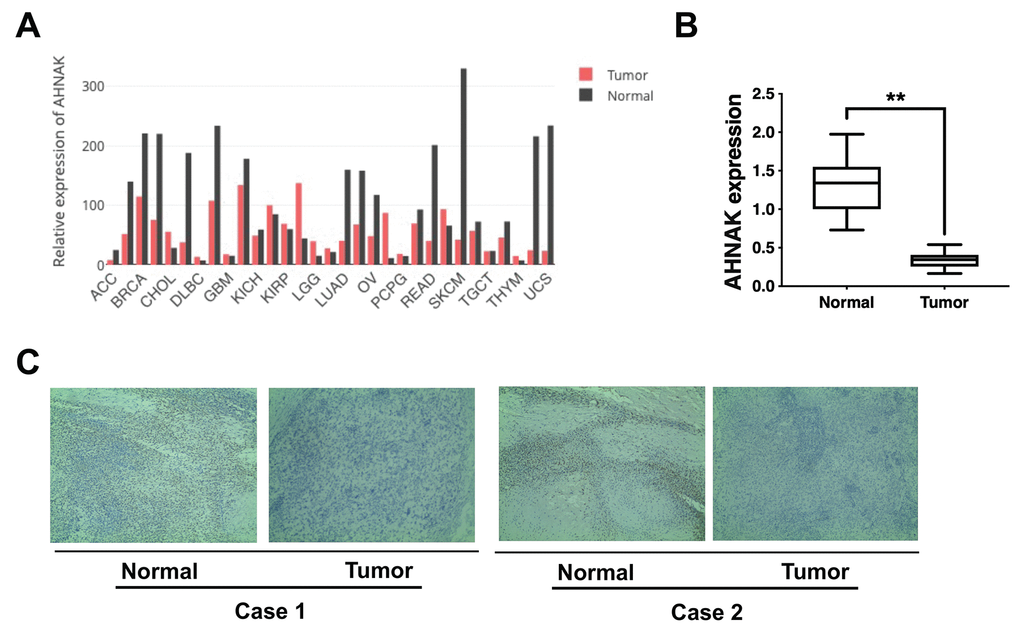 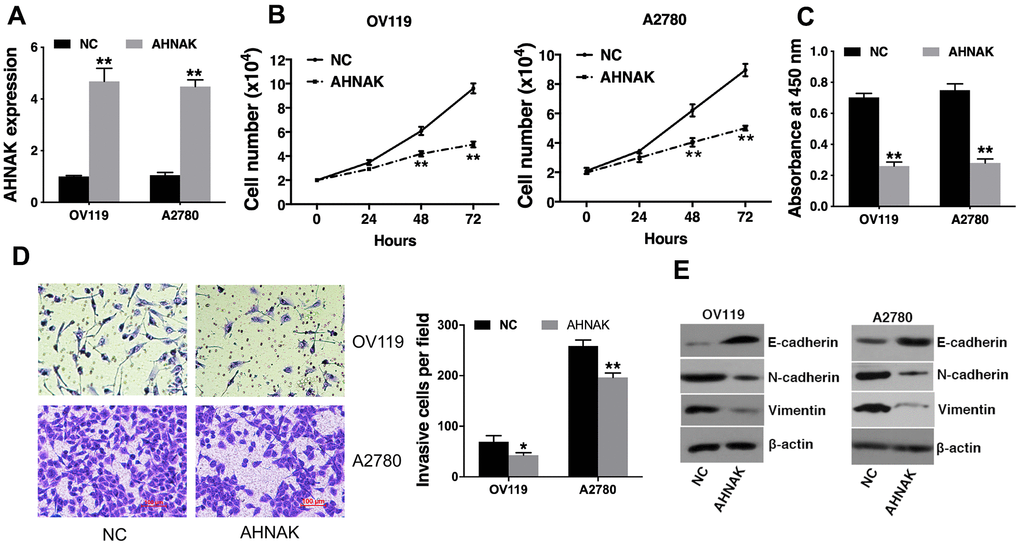 Figure 2. Elevated AHNAK content represses ovarian cancer cell proliferation along with infiltration in vitro. (A) qRT-PCR illustrated that AHNAK was successfully overexpressed. (B) Cell proliferation analysis was performed. Cell numbers were evaluated at 24 h, 48 h, and at 72 h after incubation by Coulter Counter (Beckman Coulter, USA). (C) CCK-8 assay was performed. (D) Transwell assays were performed (left), after which infiltrating cells were quantified by the Image J software (right). (E) Western blotting assessment of the levels of indicated epithelial and mesenchymal markers. Data are presented as the mean ± SD for n=3, *p < 0.05, **p < 0.01. 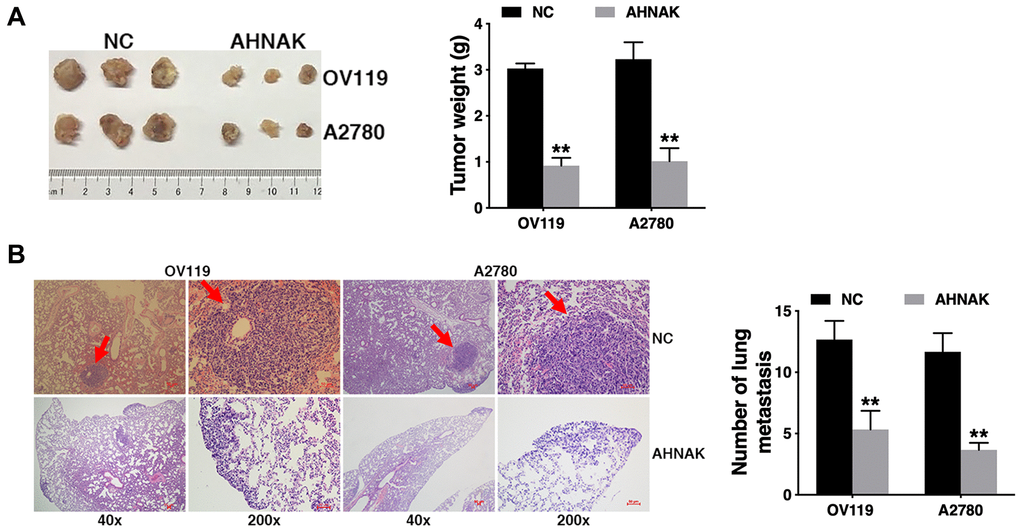 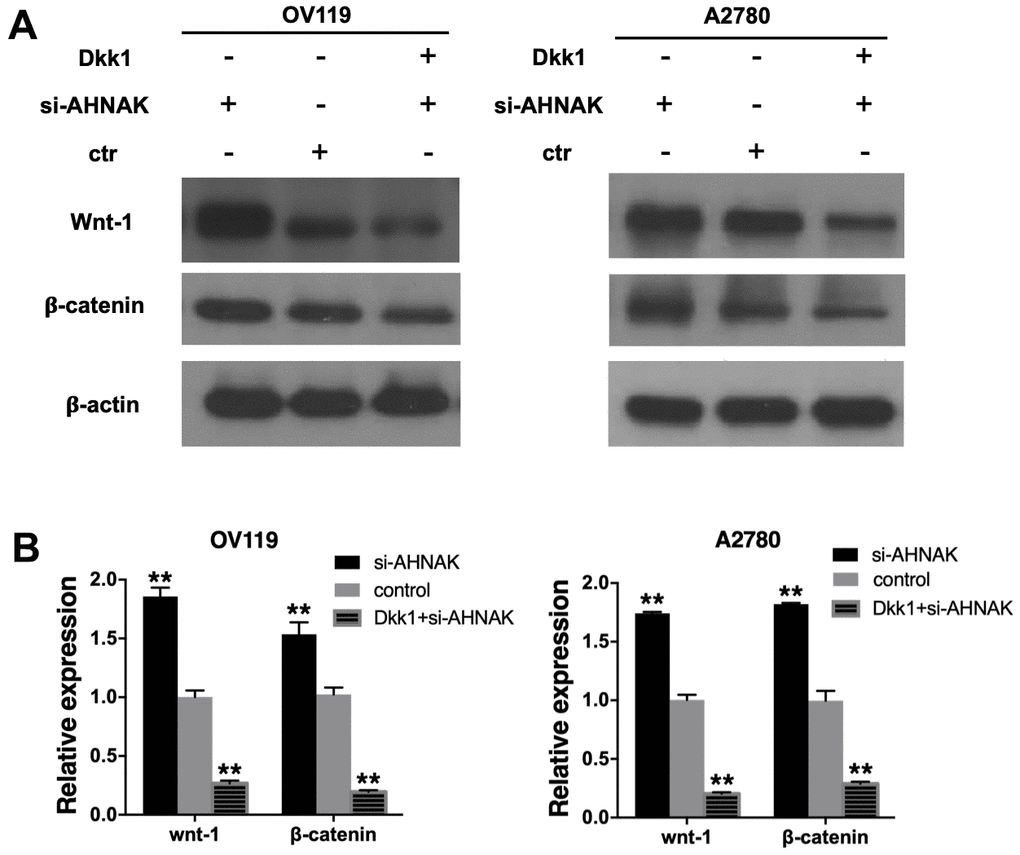 Globally, ovarian cancer has been reported to be the second most common cause of gynecologic-associated cancer fatalities among women, with most patients exhibiting metastatic disease at diagnosis. Despite the increasing improvement in surgery, chemotherapy, radiotherapy, and other targeted therapies, the prognosis of ovarian cancer is still unsatisfying [12–14]. Therefore, elucidating the molecular mechanisms underlying ovarian cancer progress and developing new targets are urgently needed.

AHNAK is a protein associated with various cellular processes, e.g., cell migration and infiltration. In prostate cancer, BRD4 regulates cell migration along with infiltration through the transcription of AHNAK [15]. In liver cancer, RNF38 was shown to induce cellular EMT by promoting TGF-β signaling through AHNAK ubiquitination and degradation [16]. Moreover, AHNAK is involved in chemotherapeutic responses. In breast cancer, there is a correlation between AHNAK and resistance to doxorubicin [17]. In non small-cell lung cancer, UBE3C ubiquitinated and promoted AHNAK degradation, resulting in enhanced stemness [18]. AHNAK is downregulated and remarkably linked with poor survival in numerous cancers, such as glioma [19] and melanoma [20]. Engqvist et al. recently reported that AHNAK was one of the most common fusion partners and functioned as a significant driver fusion transcript in early-stage ovarian cancer [21]. Nevertheless, the mechanism of AHNAK in ovarian cancer is still unclear.

The above experiments prompted us to examine the possible molecular mechanisms underlying the biological functions of AHNAK in ovarian cancer. Previous research documented that the Canonical Wnt cascade is related with the progress of cancer, especially with cell migration and infiltration [7–9]. The Canonical Wnt cascade promotes cancer progress in ovarian cancer through multiple mechanisms including EMT, cancer stemness, as well as therapy resistance [22]. In ovarian cancer, the regulatory mechanisms for Wnt/β-catenin cascade included gene as well as non-coding RNA alterations, epigenetic alterations, several soluble factors in ovarian cancer ascites, and extracellular vesicles such as exosomes.

Accumulative evidence documented that Canonical Wnt cascade has an indispensable role in metastasis of ovarian cancer through activation of EMT. S Bernaudo et al. reported that cyclin G2 suppressed ovarian cancer via repressing EMT through disrupting the Canonical Wnt cascade [23]. IQGAP2 was reported to inhibit ovarian cancer cell EMT, migration along with infiltration by suppressing the Wnt-induced nuclear translocation of β-catenin, as well as transcription [24]. Ovarian cancer has a unique mechanism of peritoneal migration. There are no anatomical barriers between the primary site and abdominal cavity. EMT is involved in initiation of exfoliated malignant cell dissemination; therefore, increases the metastasis and migration of ovarian cancer. Herein, we found that elevated AHNAK content decreased the quantities of Canonical Wnt cascade markers and epithelial marker β-catenin, illustrating that AHNAK functioned partly via modulation of the Wnt–β-catenin cascade (Figure 4). Besides, our results illustrated that AHNAK overexpression suppressed tumor growth along with migration in vivo and vitro. Taken together, the results illustrated that AHNAK might inhibit tumor infiltration and migration by repressing EMT via modulating the Canonical Wnt cascade.

In summary, AHNAK levels in ovarian cancer are suppressed while AHNAK overexpression inhibits ovarian cancer progression by targeting the Canonical Wnt cascade. Therefore, AHNAK might be a marker, as well as treatment target for ovarian cancer. However, there were some limitations in our study. One limitation is, for instance, the fact that other functions of AHNAK in cancer and its relevance to the current research are not described: for example, the role of AHNAK in EMT. Also, more clinical data would increase the validity of the results. Hence, further investigation of the underlying mechanism is warranted.

Gene expression of AHNAK in GEPIA

GEPIA (http://gepia.cancer-pku.cn/index.html), a web server for assessing RNA expression data for 9,736 cancers and 8,587 non-malignant samples from TGGA along with the Genotype-Tissue Expression projects. The expression profile of AHNAK in different cancers was explored in GEPIA.

Thirty paired serous ovarian tumor and neighboring non-malignant tissues were acquired from The First Affiliated Hospital of the University of South China. The immunohistochemistry (IHC) of AHNAK staining (1:250, Abcam, USA) was performed as described previously [5]. Certified pathologists evaluated the staining in a blinded manner.

Ovarian cancer OV119 and A2780 cell lines were obtained from the American Type Culture Collection (USA) and were grown as described by the manufacturer. Cells were validated to be mycoplasma infection-free, and the authenticity was confirmed via DNA fingerprinting.

For AHNAK overexpression experiments, an AHNAK-expressing lentivirus vector (EX-V0190-Lv122) as well as control plasmid (EX-NEG-Lv122) were provided by GeneCopoeia (USA). The Lenti-Pac™ HIV Expression Packaging Kit (Cat No, GeneCopoeia) was employed to generate lentiviruses. Lentiviral cell infections were performed using Lipofectamine 2000 (Cat No, Invitrogen, USA) and screened with puromycin (2 μg/mL) to obtain AHNAK-expressing cells. For AHNAK knockdown experiments, cells were inserted with si-AHNAK (Santa Cruz Biotechnology, sc-97060) via transfection as described by the manufacturer. A nontargeting siRNA was used as control. Then, the cells were grown and utilized in the subsequent assays.

RNA extraction was performed using the TRIzol reagent (Invitrogen). Denaturing agarose gel was employed to check RNA integrity via electrophoresis. PrimeScriptTM RT Master Mix as well as SYBR® Premix Ex TaqTM II (Cat No, Takara, Japan) were used to perform qRT-PCR using the Bio-Rad CFX96 PCR System (USA). Primers used in this study were synthesized by Invitrogen and they are shown in Supplementary Table 1. β-actin value served as the normalization standard and calculated by the 2-ΔΔCt approach. Each reaction was repeated in triplicates.

OV119 and A2780 cells (1 × 104) were cultured, and a medium supplemented with 10% FBS introduced in the lower compartment (BD Biosciences, USA) as a chemoattractant. Afterwards, we fixed the cells with methanol, followed by 0.1% crystal violet staining, and counting.

The animal study was performed as previously described [25, 26]. OV119 and A2780 cells were stably transfected with AHNAK or vector and suspended in PBS at 1 × 107 cells/ml, respectively. Then, cells (2 × 106) were subcutaneously inoculated into 4 week old female BALB/c nude mice using a 1-ml injector. (n = 3 per group to provide a power of 90% for a remarkable level of 0.05 with a two-tailed t-test). After 4 weeks, mice were anesthetized after which xenograft tumors were excised and tumor weights determined.

For lung metastasis experiments, OV119 and A2780 cells (1 × 105) were administered through the tail vein by using a microsyringe (n = 3 per group to provide a power of 90% for a remarkable level of 0.05 with a two-tailed t-test). Cells (2 × 106 cells/ml) were dispersed in PBS. After 8 weeks, mice were anesthetized after which lungs were excised. The number of lung macro metastatic nodules were counted and verified by hematoxylin and eosin (HE) staining, which was explored via certified pathologists in a blinded manner.

Statistical analyses were implemented using the SPSS 19.0 software. Between group comparisons were performed using t-tests. Data are presented as the mean ± SD for three independent experiments, unless otherwise stated. Differences were considered statistically significant when p ≤ 0.05.

The data supporting the findings in this study are available from the corresponding author upon reasonable request.

YC wrote the manuscript, YH and FY performed the experiment and collected data, WT, SW, and SS interpreted and analyzed the data, and JZ designed the study.

Thanks to Renjie Zhu for his assistance.

This study was financially supported by the grant from the Health Committee of Hunan Province (B2019132).