Copyright: © 2021 Song et al. This is an open access article distributed under the terms of the Creative Commons Attribution License (CC BY 3.0), which permits unrestricted use, distribution, and reproduction in any medium, provided the original author and source are credited.

Cathepsin like 2 (CTSL2) is a lysosomal cysteine protease, and may be associated with tumor metastasis. However, CTSL2 has not been reported as a biomarker in lung adenocarcinoma (LUAD). In this study, bioinformatics analysis using data from The Cancer Genome Atlas was performed. Wilcoxon rank-sum test and chi-square test were carried out. Kaplan-Meier and Cox regression were performed to evaluate the effect of CTSL2 expression in the overall survival. Our results indicated that CTSL2 in tumor was significantly higher than that in normal tissue (P < 0.001). High CTSL2 expression was significantly associated with age (P = 0.02), vital status (P < 0.001), and T classification (P = 0.03), and correlated with poor overall survival (HR = 1.62, 95% CI = 1.21–2.18, P = 0.001). CTSL2 expression was an independent risk factor for overall survival in patients with LUAD (HR = 1.52, 95% CI = 1.12–2.05, P = 0.006). A nomogram was plotted for illustration of CTSL2 expression on the risk of LUAD. Furthermore, in vitro cell experiments showed the CTSL2 promoted the proliferation and migration of A549 cells. In summary, high CTSL2 expression predicts poor prognosis in patients with LUAD.

Lung cancer is malignant with high incidence and mortality all over the world [1, 2]. The 5-year survival rate of lung cancer is 4–17% based on different stages when diagnosed [3]. Lung adenocarcinoma (LUAD) is the most common type of lung cancer in histology [1, 2].

The pathogenesis of LUAD is complicated [4]. In addition to genetic factors, the main risk factors are smoking, asbestos, radon and other environmental factors [5]. Although the targeting and immunotherapy of LUAD have made great progresses in recent years, its prognosis is still poor [6]. The main reason is the polymer heterogeneity of lung cancer [7]. Since the current diagnostic methods relying on low-dose CT scans and classic serum tumor markers are limited and not specific, LUAD is usually at an advanced stage when diagnosed [8, 9]. Therefore, it is greatly significant to carry out more in-depth explorations of LUAD, and to find new biomarkers related to its diagnosis and prognosis.

Metastatic progression is one of the biggest challenges, which limits the effect of cancer therapies. Proteolysis is involved in the invasion by cleavage of proteins that mediate adherence to neighboring cells. Cathepsins are a family of lysosomal proteases involved in proliferation, invasion and metastasis of different kinds of cancers [10]. The human cysteine cathepsin family is comprised of eleven members including Cat B, C, F, H, L, K, O, S, V, W, and X/Z, which shares a conserved active site. CTSL2 gene encodes cathepsin like 2 (cathepsin L2, also known as cathepsin V) [11]. CTSL2 is a lysosomal cysteine protease, and may be associated with tumor metastasis [10, 12]. Overexpression of CTSL2 has been found in various human cancers, including breast cancer, squamous cell carcinoma, thymic carcinoma, et al. [13–15]. Besides, CTSL2 is regarded as a potential drug target [16]. These findings indicate that CTSL2 may be a biomarker for cancer diagnosis and prognosis. Therefore, we focus on the role of CTSL2 in LUAD.

Characteristics of patients with lung cancer

The expression of CTSL2 in lung adenocarcinoma and normal lung tissues were compared (Figure 1A). The tumor CTSL2 level was significantly increased (P < 0.001) in comparison with normal tissue. The comparison of tumor and paired normal tissue further verified the high CTSL2 expression in LUAD (P < 0.001; Figure 1B).

Table 2. Logistic analysis of the association between CTSL2 expression and clinical characteristics. 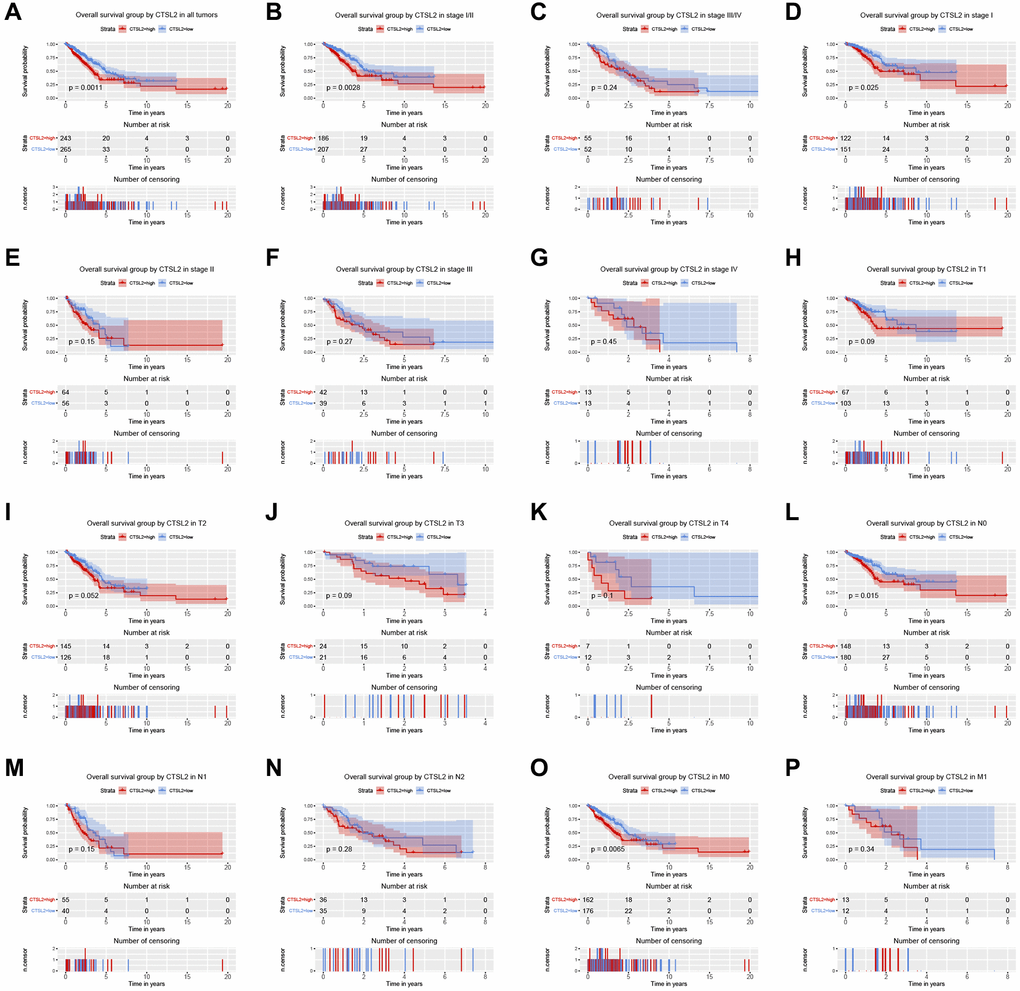 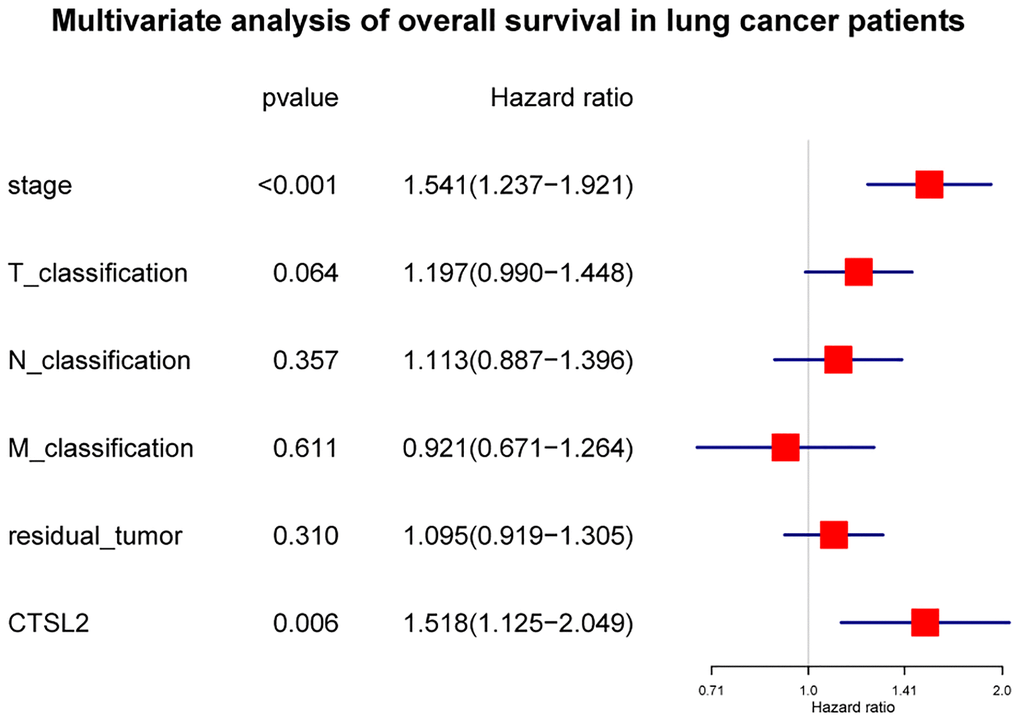 Diagnostic value of CTSL2 for LUAD

The ROC curves were drawn to examine the diagnostic value of for LUAD. The area was 0.881, indicating a modest diagnostic value of CTSL2 expression (Figure 5A). As shown in Figure 5B–5E, the AUC values were 0.763 for stage I, 0.827 for stage II, 0.816 for stage III, and 0.771 for stage IV, respectively. Furthermore, a nomogram model was established for predicting the survival probability of LUAD patients in different years, which involved stage and CTSL2 expression (Figure 6). To evaluate the discrimination and performance of the model, DCA, calibration, and ROC curves were plotted, indicating that the nomogram was stable in predicting the prognosis of LUAD patients (Supplementary Figure 1). 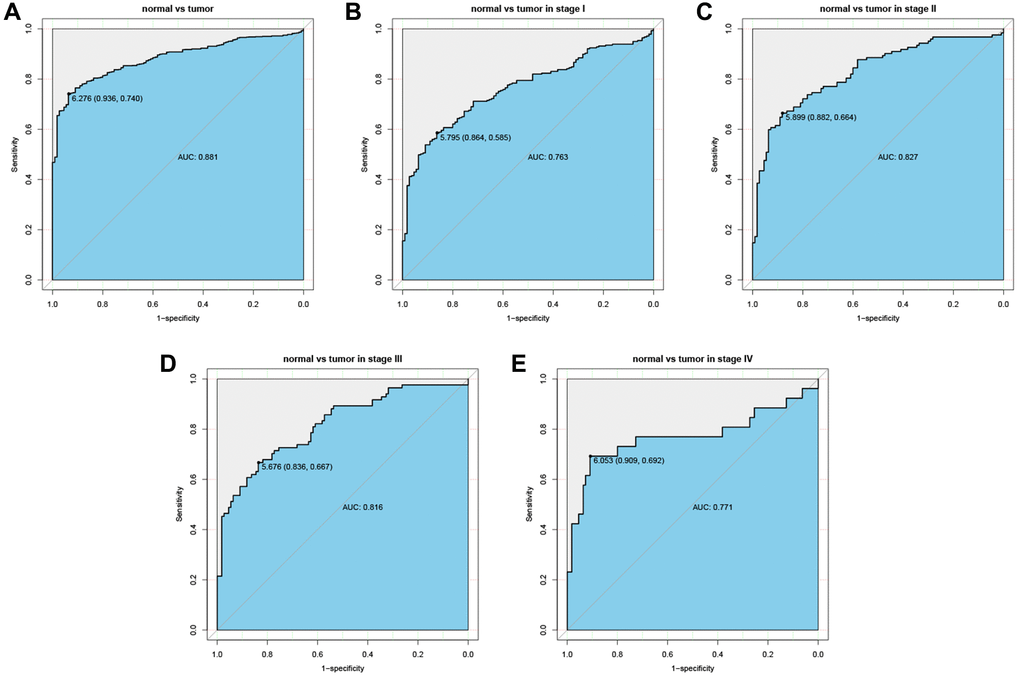 Figure 5. Diagnostic value of CTSL2 expression in lung adenocarcinoma. (A) ROC curve for CTSL2 in normal lung tissue and tumor; (B–E) Subgroup analysis for stage I, II, III, and IV. 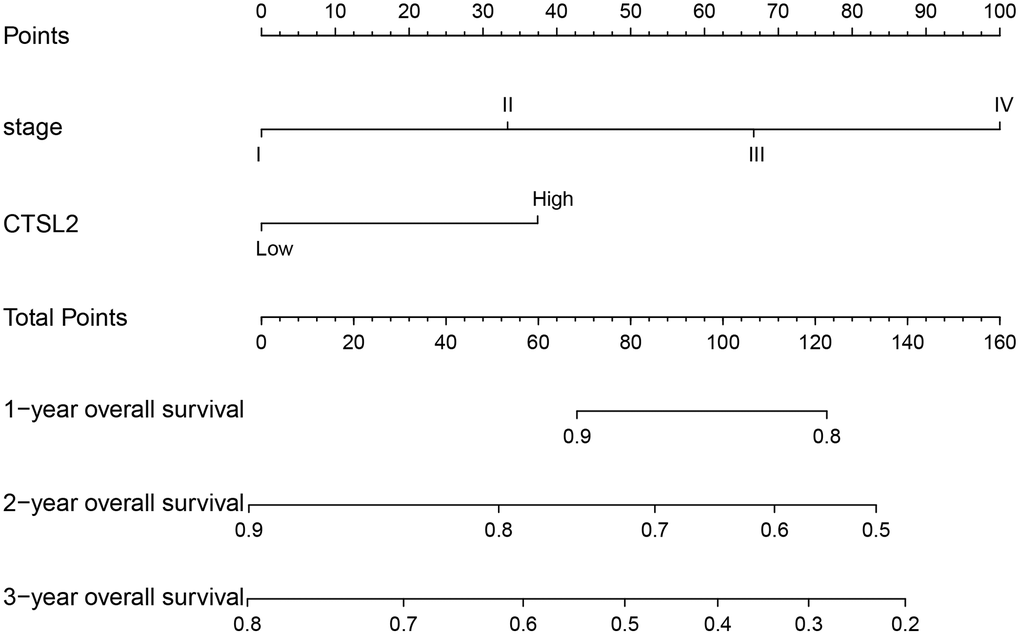 Figure 6. Nomogram for predicting probability of patients with 1-, 2- and 3-year overall survival. 1-, 3- and 5-year related survival probabilities were obtained by draw a line straight down to the Risk axis. 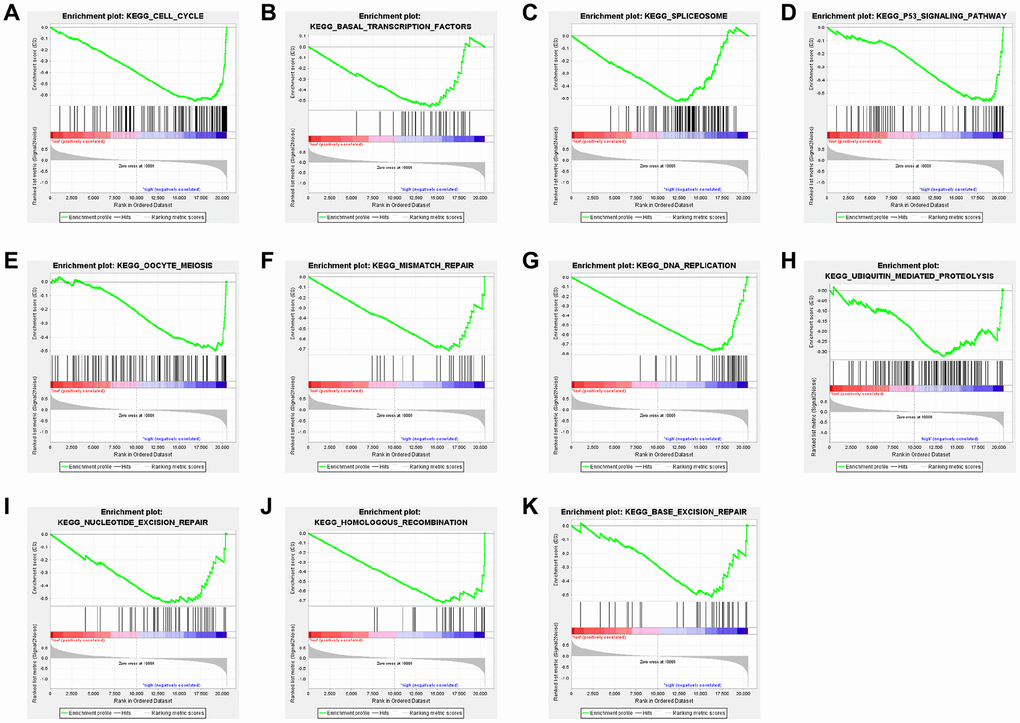 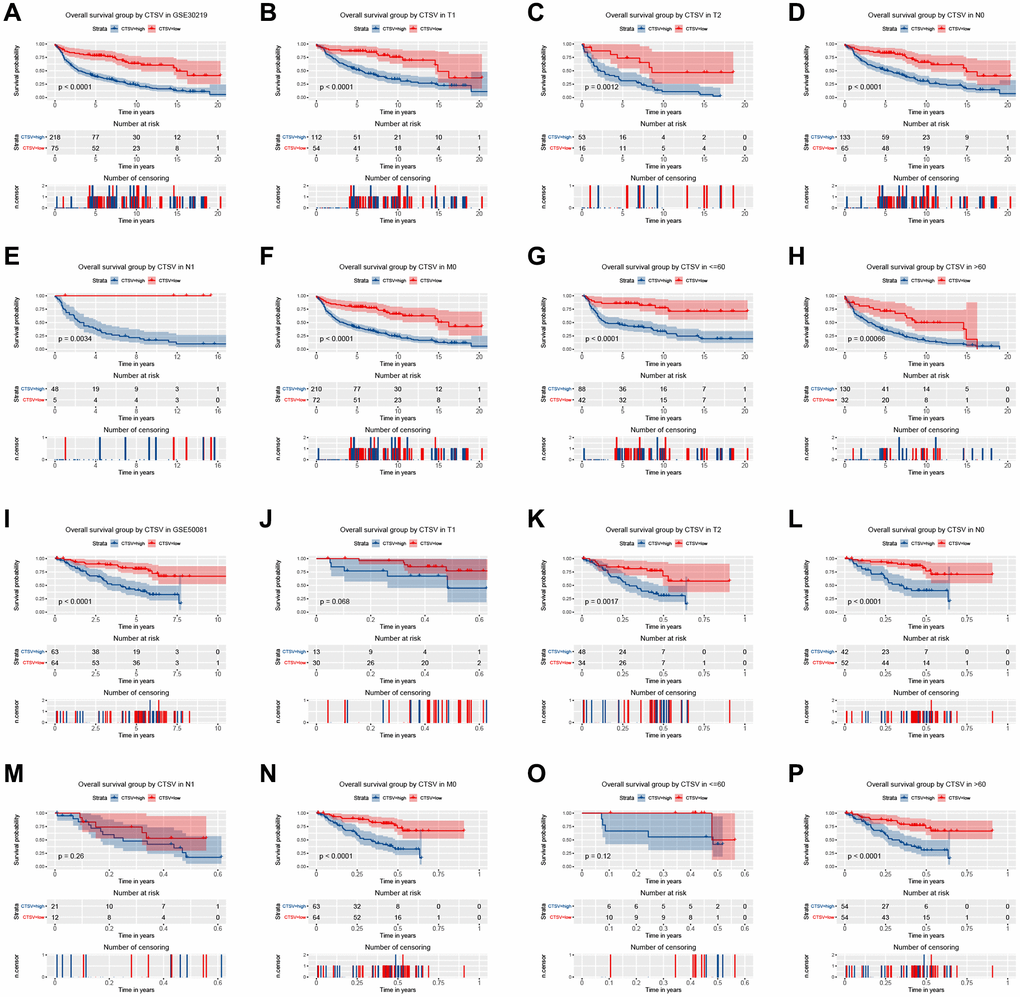 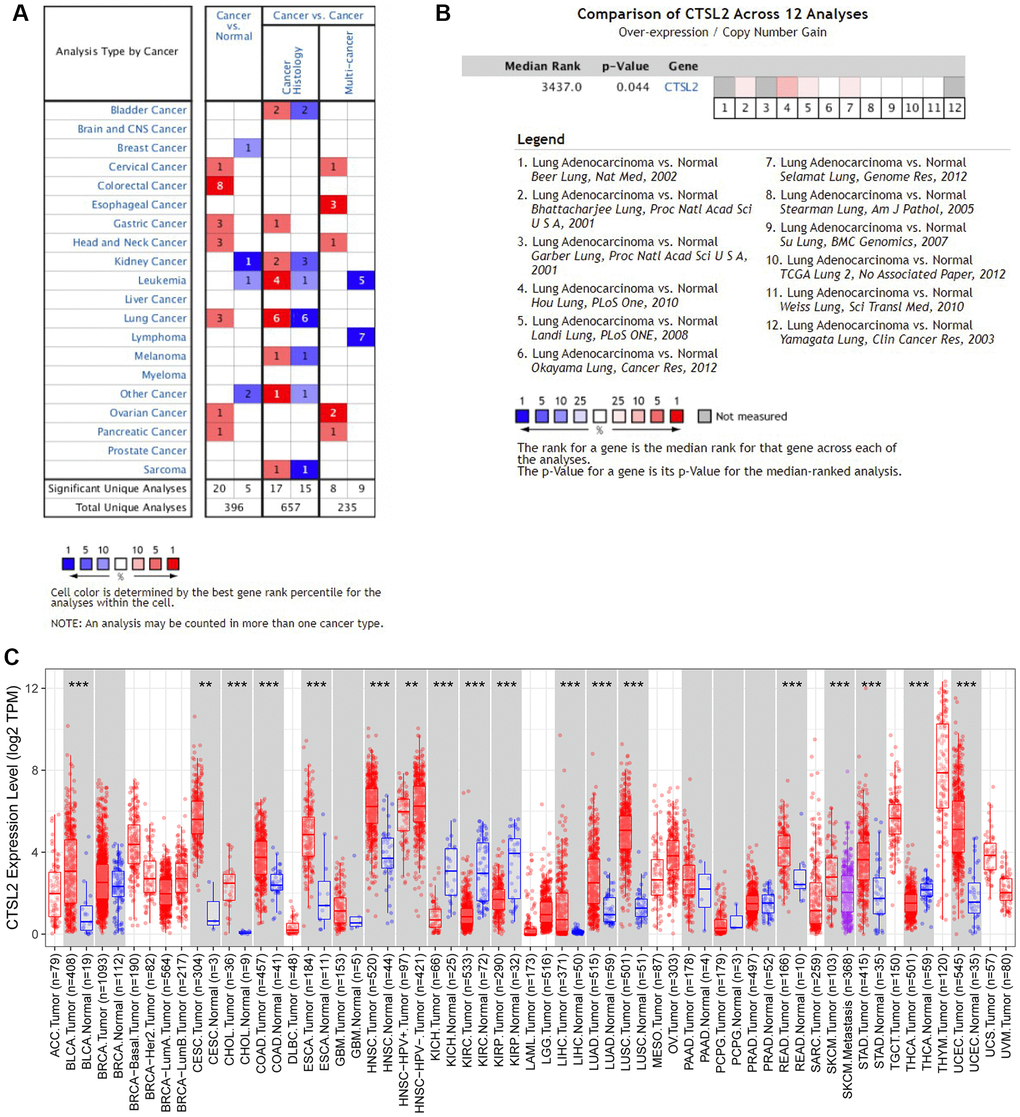 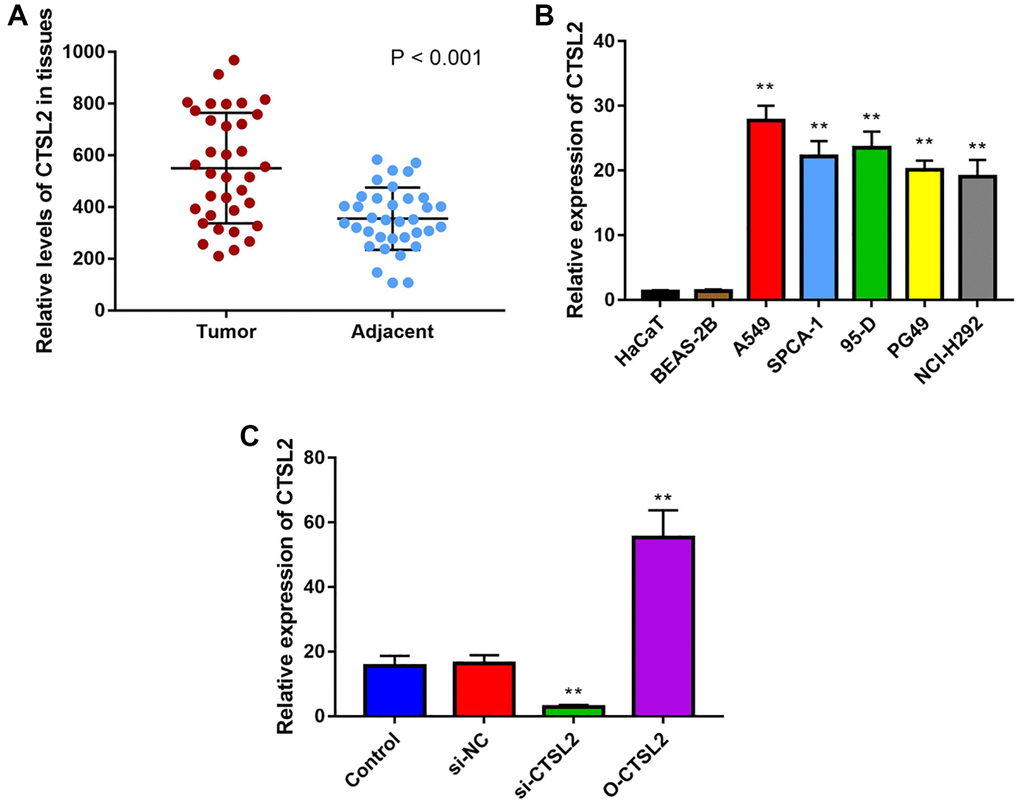 CTSL2 promoted the proliferation and migration of A549 cells

The role of CTSL2 on proliferation and migration of A549 cells was studied. As shown in Figure 11A, over-expression and knockdown of CTSL2 promoted and inhibited the proliferation of A549 cells, respectively. The results of CCK-8 were verified by the LIVE/DEAD staining (Figure 11B–11C). Compared with control and si-NC group, si-CTSL2 group showed significantly higher percentage of dead cells (P < 0.01). The results of colony formation were consistent with those of CCK-8 and LIVE/DEAD staining (Figure 11D–11E). Over-expression of CTSL2 showed significantly increased number of colonies (P < 0.05). The cell migration assay showed that si-CTSL2 significantly reduced and O-CTSL2 significantly increased the migration distance of A549 cells (Figure 11F–11G). 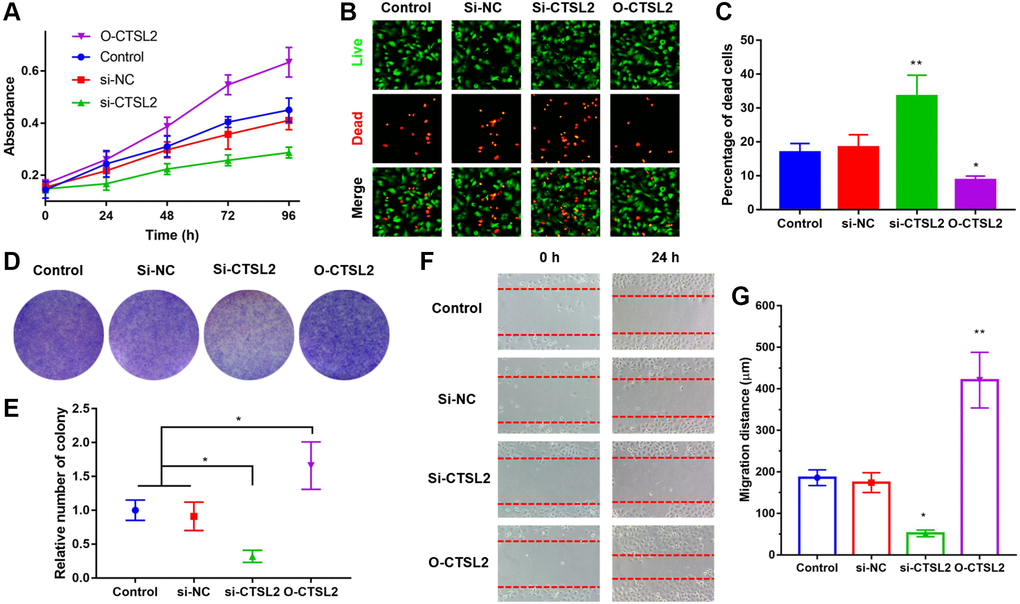 Exploration of biomarker have been performed in cancer such as breast cancer and liver cancer [28–30]. However, not too much progress has been made in LUAD. We first demonstrated that CTSL2 was highly expressed in LUAD, which was significantly associated with age, vital status, and T classification. Moreover, CTSL2 showed the moderate diagnostic value for LUAD. Data mining has been emerged as an approach to find novel biomarkers [31, 32]. The existed biomarkers have not shown satisfied diagnostic and prognostic value [33–35]. Therefore, it is necessary to explore novel biomarkers to further solve this problem [36–37]. The thymidine kinase 1 was found to improve its diagnostic value for LUAD when combined with carcinoembryonic antigen [38]. Moreover, newly reported biomarkers including uridine-cytidine kinase 2 and long non-coding RNA XLOC_009167 have shown potential value in prognosis [39–40]. Together with these findings, our finding that high CTSL2 expression predicts poor prognosis in patients with LUAD also contributes to the biomarker exploration for clinical practice.

CTSL2 belongs to the cathepsins family, which are involved in proliferation, invasion, and metastasis of different kinds of cancers. Upregulation of cathepsin L protein was observed in the conditional K-rasG12D mouse LUAC model [41]. High CTSL2 expression was found in squamous cell carcinoma by high-density oligonucleotide microarray [14]. mRNA level of CTSL2 is significantly increased in endometrial cancer especially in G3 tumors, indicating it may lead to the progression of endometrial cancer [42]. In our study, we found high CTSL2 expression in LUAD tissue and cell by performing bioinformatic analysis and q-PCR. Similarly, Michael et al. reported the prognostic significance of CTSL2 in breast ductal carcinoma in situ [43]. Moreover, our GSEA analysis suggested that high CTSL2 expression may be associated with cell cycle, basal transcription factors, spliceosome, p53 signaling pathway, oocyte meiosis, et al. The phenomenon that CTSL2 promoted the proliferation and migration of A549 cells may be associated with these biological processes and signaling pathways, which needs to be investigated in the future.

Public TCGA (The Cancer Genome Atlas) database was analyzed for data mining with no ethical concern, involving 517 LUAD patients. The RNA expression of CTSL2 was box-plotted. ROC (Receiver operating characteristic) curve was drawn with the AUC (area under curves) calculated using pROC package [44]. The high-expressed and low-expressed groups were determined by identified CTSL2 threshold level. The survival package in R and Cox model was used as previously reported [45]. The covariates included in the multivariate Cox regression model were stage, T, N, M classification, residual tumor, and CTSL2 expression. GSE30219 (analyzing 293 lung tumor and 14 normal lung specimen) and GSE50081 (analyzing 181 Stage I and II non-small cell lung carcinoma) were used for external validation. Evaluation of subgroups was performed as well. GSEA was carried out for identification of CTSL2 expression-related genes and examination of the survival significances. Oncomine database and TIMER database were used for validation of CTSL2 expression.

We collected LUAD and adjacent tissues from 35 patients. The samples were kept in liquid nitrogen immediately after resection, and stored at −80°C. The study was approved by the First Hospital of Jilin University Ethics Committee and conformed to the Declaration of Helsinki.

First, plasmid was added into each plate, followed by culturing for 24 h. After adding CCK-8 solution (10 μL), the cells were placed for 20 min. The 490 nm absorbance was measured, and the cell viability was calculated. Calcein AM and PI co-staining and colony formation assay were further performed [44].

Calcein AM was used to stain the live cells [44]. The cell migration was recorded using fluorescence microscope, and the migration distance was calculated.

R version 3.5.2 package and ggplot2 package in R were used for bioinformatics analysis [45–46]. The Wilcoxon rank-sum test and Kruskal-Wallis test were used. The chi-squared test and Fisher's exact test were used for assessing association. Kaplan-Meier and Cox regression were performed to evaluate the effect of CTSL2 expression in the overall survival [47]. GSEA was performed using data from TCGA. The student’s t-test (unpaired, two-tailed) was used to analyze experiment data. P < 0.05 was used as the threshold of statistical significance.

G.W., and W.P. designed this study and had full access to all of data in the study; J.S., and J.J. extracted the data; N.W., and Z.D. analyzed and interpreted the data; J.S., and J.J wrote the paper. All authors reviewed the manuscript.

This study was supported by Jilin university project (No. 2019XZC082).