MKRN2 inhibits the proliferation of gastric cancer by downregulating PKM2

Copyright: © 2022 Liu et al. This is an open access article distributed under the terms of the Creative Commons Attribution License (CC BY 3.0), which permits unrestricted use, distribution, and reproduction in any medium, provided the original author and source are credited.

Cumulative evidence suggests that dysfunction of ubiquitinating enzymes is responsible for multiple types of diseases including cancer. However, what role the ubiquitinating enzyme plays in gastric cancer remains unknown. In this study, using bioinformatics analysis and a series of experimental analyses, we found that an E3 ubiquitin-protein, MKRN2 was down-regulated in gastric cancer tissues. Kaplan–Meier survival analysis showed the low MKRN2 expression significantly indicated poor prognosis. Overexpression of MKRN2 notably inhibited cell proliferation in vitro and in vivo. Conversely, knockdown of MKRN2 had the opposite effects in vitro. Additionally, the mechanical analysis indicated that MKRN2 promoted ubiquitination-mediated degradation of PKM2 and attenuated its effect on ERK. Overall, the present study suggests that MKRN2 may be a potential therapeutic target for gastric cancer.

Gastric cancer (GC) is one of the most detrimental tumors in the digestive system, ranking fourth in morbidity and third in lethality, and >50% of GC cases occur in Eastern Asia [1–3]. However, due to the asymptomatic characteristics of the early stages of GC, diagnosis is often delayed, and the disease is diagnosed at an advanced stage, which further reduces the five-year survival rate [4, 5]. Therefore, investigating GC pathogenesis is very important to improve the clinical diagnosis and treatment of GC.

Abnormal protein degradation in cancer cells has emerged as one of the essential hallmarks of cancer and is an area of great interest in cancer research [6–8]. We found that MKRN2, an E3 ubiquitin-protein, is poorly expressed in GC from The Cancer Genome Atlas (TCGA) public database. As known, MKRN2 was involved in ubiquitin-dependent degradation of the p85α subunit of PI3K (PI3Kp85α) in lung cancer; additionally, several studies reporting that MKRN2 is a novel ubiquitin E3 ligase targeting the p65 subunit of NF-κB to inhibit the inflammatory response [9–11]. However, the association between MKRN2 expression and the development of GC remains unclear. The aim of our study is to examine the potential biological function of MKRN2 in carcinogenesis of GC.

Table 1. Association between MKRN2 and the clinicopathological characteristics of GC.

In vitro analyses revealed significantly reduced expression of MKRN2 in the four GC cell lines as compared with that in the normal gastric cell line GES-1. These results indicated downregulated MKRN2 expression in GC; thus, we further analyzed the role and possible mechanism of MKRN2 in GC.

To verify the role of MKRN2 in GC cells in vitro, we further established two overexpressed GC cell lines using MGC-803 and SGC-7901, as these cells showed relatively increased expression levels of MKRN2. SGC-7901 and MGC-803 cell lines with MKRN2 overexpression were established by lentiviral transfection (pLV-MKRN2), and MKRN2 mimics as a negative control. The results showed that tumor cell proliferation (Figure 2B) and colony formation (Figure 2D, 2F) were significantly inhibited in the MKRN2-overexpressed group in comparison with that in the control group. 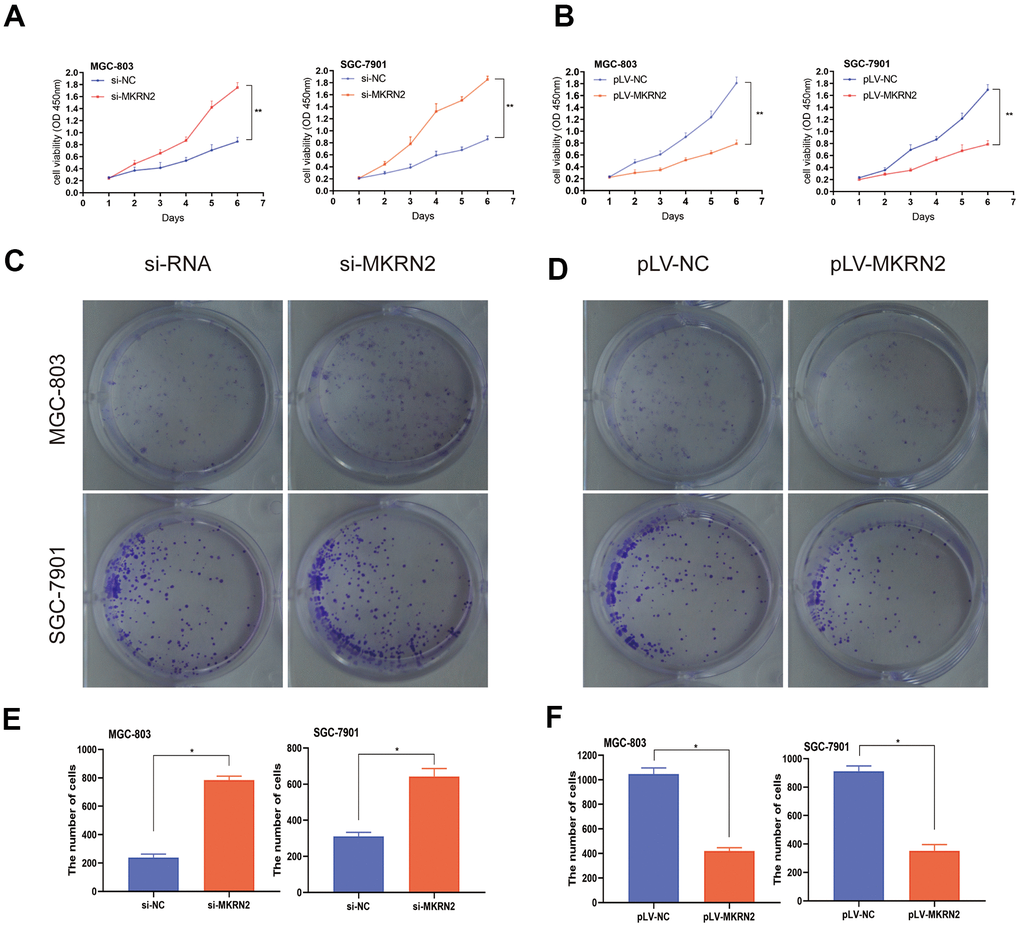 To determine whether an increase of MKRN2 expression suppresses the oncogenesis and growth of GC, we used nude mice bearing a subcutaneous xenograft tumor. Figure 3 shows that tumors derived from mice with pLV-MKRN2-transfected SGC-7901 and MGC-803 cells had significantly slower growth than those from the control group with pLV-NC transfected cells. (Figure 3A, 3B) After sacrifice, we found that the average weight of the xenograft tumors derived from mice with pLV-MKRN2 transfected cells was significantly lower than that of the tumors from the control group (Figure 3C). Hence, we infer that MKRN2 upregulation inhibits the proliferation of GC cells in vivo. 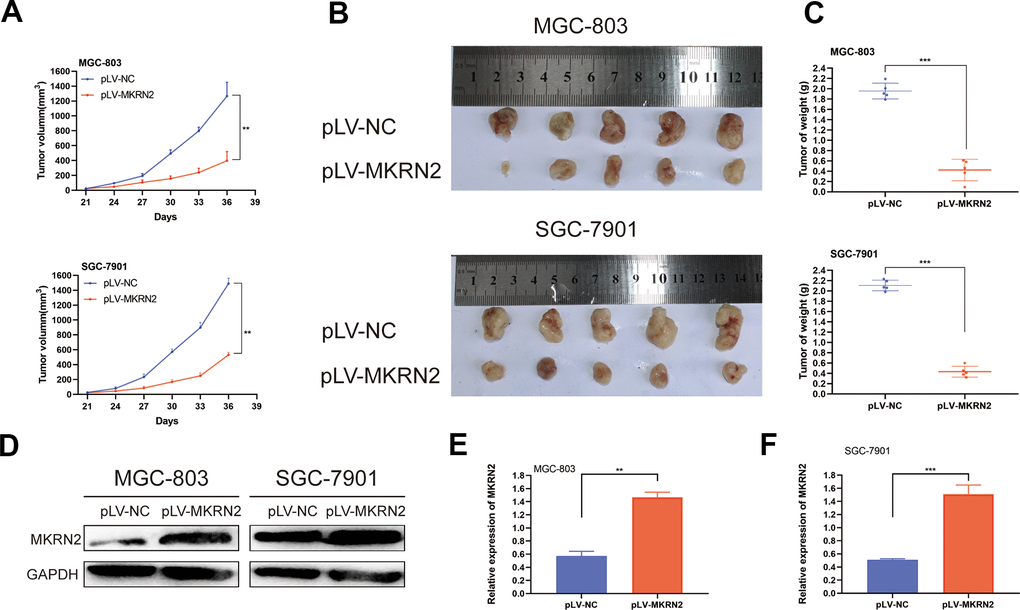 To investigate the molecular mechanisms involved in regulating GC by MKRN2, we compared the mRNA expression profiles between pLV-MKRN2 and NC (SGC-7901) by RNA-seq analysis. We found that MKRN2 inhibits the ERK signaling pathway, which plays a vital role in regulating tumor proliferation [12, 13] (Figure 4A). 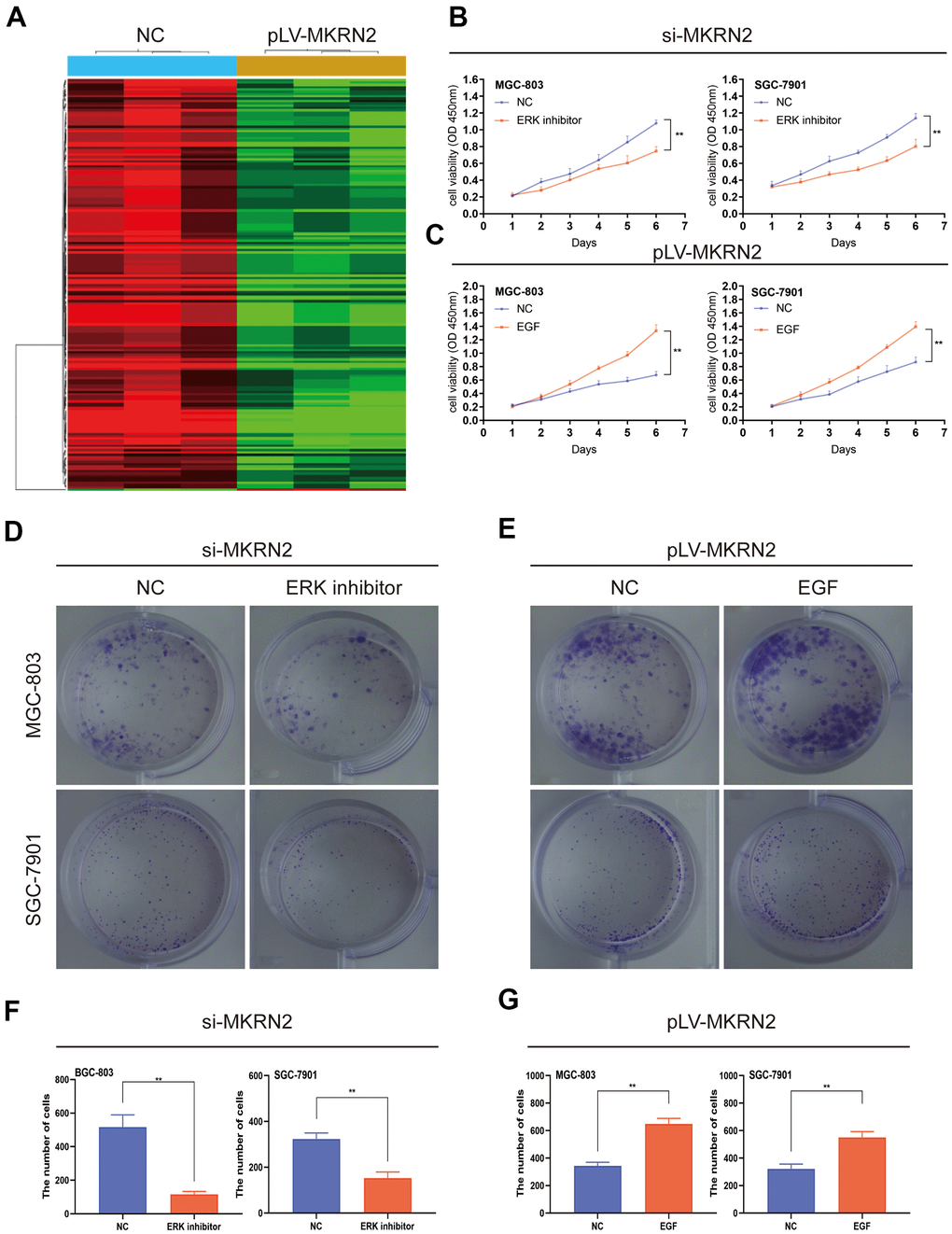 ERK1/2 and P-ERK1/2 protein levels were analyzed using western blot as we altered MKRN2 expression. Our results showed that MKRN2 expression was negatively correlated with P-ERK1/2 levels (Figure 5B). 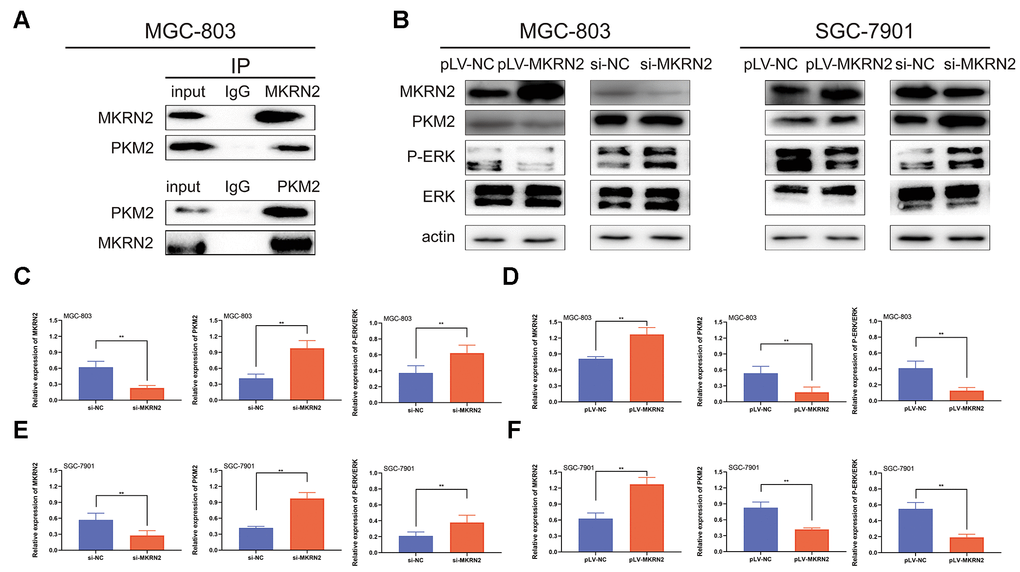 Previous reports shows that various proteins were involved in the regulation of ERK, such as EGFR, PKM2, and MEK [14–16]. To define the regulatory mechanisms of ERK by MKRN2, we assessed proteins associated with ERK activity by Co-immunoprecipitation (Co-IP) and immunoblotting. We found that MKRN2 bound to p65, which meant that MKRN2 inhibited ERK by degrading PKM2 (Figure 5A). 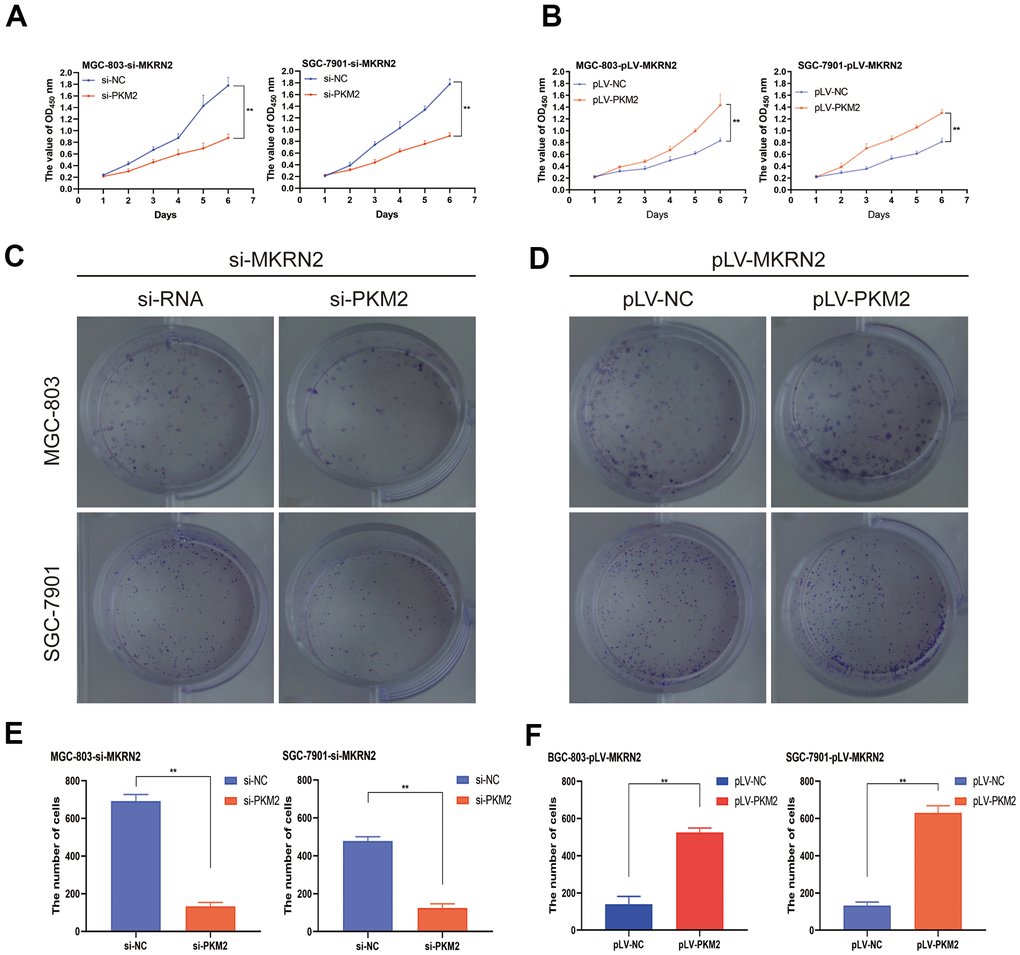 Mounting evidence suggests that MKRN2 plays an important role in tumor growth and development [19–21]. In our study, we found that MKRN2 is expressed at lower levels in GC tissues than in paracancerous tissues. Clinical correlation analysis showed that the expression level of MKRN2 is related to the size and the degree differentiation of tumor. Furthermore, GC patients with high expression of MKRN2 had better survival rates. This supports the importance of MKRN2 as a marker for preventing poor prognosis.

To further investigate the molecular mechanisms, RNA-seq and western blot were used to analyze the differential expression of ERK and PKM2 genes in MKRN2 overexpressed GC cells compared to control cells. We found that MKRN2 inhibited the ERK pathway. The rescue experiment further proved that MKRN2 inhibited cell proliferation by inhibiting ERK expression.

Co-IP and western blot analyses showed that MKRN2 could mediate the ubiquitination of PKM2, which promotes cancer proliferation [22]. The evaluation of the effects of PKM2 in GC cells showed that PKM2 plays an important role in the tumor proliferation and P-ERK expression.

In conclusion, the present study revealed that MKRN2 inhibits GC cell proliferation by degrading PKM2. These findings can be useful in diagnosing GC at an early stage, and the knockdown of MKRN2 could potentially lead to the development of better treatment strategies. Further study with a larger patient sample size is necessary in the future.

All cell lines were purchased from the Cell Bank of Chinese Academy of Sciences (Shanghai, China) and were cultured in DMEM (Gibco, NY, USA) supplemented with 10% fetal bovine serum (FBS; Gibco, NY, USA) and with 100 units of penicillin and 100 μg streptomycin per ml in a humidified atmosphere at 37° C with 5% CO2.

Lentiviral siRNAs against the same target genes (MKRN2 and PKM2) and corresponding negative controls were designed, synthesized, and verified by Shanghai Kaiji Biotech (Shanghai, China). The sequence of MKRN2 small interfering RNA (siRNA) was CAGATCACTTGCAGGTATT dTdT, and the sequence of the PKM2 small interfering RNA (siRNA) was “CATCTACCACTTGCAATTA”.

Proliferation was investigated using the Cell Counting Kit-8 (CCK-8, Dojindo, Japan) assay and colony formation assay. After infection, cells were seeded into 96-well plates (3,000 cells per well) and were incubated at 37° C. Next, CCK-8 solution (10 μl per well) was added, and the absorbance was measured at 450 nm using a microplate reader (Thermo Fisher Scientific, MA, USA). In the colony formation assay, single-cell suspensions were plated (800 cells per dish) with DMEM containing 10% FBS and cultivated. After three weeks, cells were stained with 0.1% crystal violet, and colonies were counted under the microscope.

Female BALB/c nude mice (Five-weeks old on average) were obtained from SLAC Laboratory Animal Center (Shanghai, China). Transfected MGC-803 and SGC-7901 cells (1×107 cells per injection) were subcutaneously injected into the flanks of nude mice. All procedures were conducted in accordance with the guidelines of the U.K. Animals (Scientific Procedures) Act, 1986. We calculated the tumor size every 2 days. At the end of the study, the mice were sacrificed and their tumors were removed, photographed, measured, frozen, and stored at -80° C until further analysis.

Samples were lysed in RIPA buffer (Beyotime Biotechnology, Shanghai, China) for 20 min at 4° C; then, we measured the protein concentrations using a BCA kit (Thermo Fisher Scientific, MA, USA). Next, protein samples were separated on 10% sodium-dodecyl sulfate polyacrylamide gel electrophoresis (40 μg/lane) and were transferred to polyvinylidene difluoride (PVDF) membranes (Sangon Biotech, Shanghai, China). Next, we blocked membranes in PBST with 5% skim milk and incubated the samples at 4° C with rabbit anti-human antibody (anti-MKRN2,1:1000, anti-PKM2,1:1000, anti-ERK,1:2000, anti-actin 1: 3000, anti-p-ERK,1:2000, All antibodies were purchased from Abcam. USA). Finally, horseradish peroxidase (HRP)-conjugated antibody was used as the secondary antibody, and the samples were incubated for 2h.

All quantitative data were presented as mean ± standard deviation (S.D.), and qualitative data as a percentage. The difference between groups was compared using unpaired Student’s t-test and Pearson’s chi-square test. Survival data were calculated by the Kaplan-Meier method, and the difference was compared by the log-rank test. All tests were two-sided, and P < 0.05 was considered statistically significant.

Data in this study were available on request, if necessary, please contact the corresponding author.

Jun Zhang conceived and conducted the study, Zheng Liu, Xingchen Guo and Shuyao Xiang participated in the experiments. Data were collected and analyzed by Jinghuan Zhou, Lixin Liao and Jiaxin Kou. The manuscript was written by Zheng Liu and Xingchen Guo, and revised by Shuyao Xiang.

The study was funded by the Fundamental Research Funds for the Central Universities (lzujbky-2019-54) and the National Natural Science Foundation of China (11975115).