Copyright: © 2021 Hadanny et al. This is an open access article distributed under the terms of the Creative Commons Attribution License (CC BY 3.0), which permits unrestricted use, distribution, and reproduction in any medium, provided the original author and source are credited.

In conclusion, for the first time in humans, the study provides direct evidence of HBOT is associated with transcriptome changes in whole-blood samples. Our results demonstrate significant changes in gene expression of normal aging population.

Aging can be defined by the gradual decline of physiological capacities, resulting in impaired functions and susceptibility for diseases and death. This biological deterioration is considered a major risk factor for Alzheimer’s disease, cardiovascular disease, diabetes mellitus, cancer among others. The aging rate is partially determined, by genetics and other evolutionary conserved biochemical processes [1].

The aim of the current study was to evaluate whether HBOT affects gene expression in the normal aging population (excluding pathological aging).

Thirty-five aging independent adults good functional and cognitive status over 64 years old were enrolled. The clinical study was performed in the Shamir (Assaf-Harofeh) Medical Center, Israel between 2016–2020. All included participants ruled out any history of cardiac or cerebrovascular ischemia for at least one year prior to inclusion. Patients with previous HBOT exposure in the last three months prior to inclusion, known malignancy in the year prior to inclusion, pathological cognitive decline, uncontrolled diabetes mellitus (HbA1C>8, fasting glucose>200), severe chronic renal failure (GFR <30), immunosuppressants, MRI contraindications or active smoking or pulmonary diseases were excluded.

The study cohort included only HBOT treated patients, who are part of a larger cohort of normal ageing population studied at the Shamir Medical Center, Israel (NCT02790541 [10]).

The HBOT protocol was provided using a multiplace chamber (Starmed-2700, HAUX, Germany). The protocol included 60 daily sessions, during a three-month period with five sessions per week. Each session comprised of 100% oxygen provided by mask at 2ATA for 90 minutes and intermittent air breaks for five minutes every 20 minutes of oxygen. Compression and decompression rates were controlled at 1 meter/minute. During the study, lifestyle and diet changes and medication adjustments were not allowed.

In brief, 100 ng total RNA and dNTP-T7 random primers were used for reverse transcription (RT). Amplified cRNA was made using Second strand synthesis and in vitro transcription amplified cRNA. Subsequent reverse transcription produced cDNA, followed by fragmentation. Fragments were labeled with biotin for hybridization to the replication and transcription activator (RTA). Array processing was done using an Affymetrix GeneChip® Hybridization, Wash, and Stain kit. Initially, 5.2 μg biotin-labeled fragmented ss-cDNA was added to 1× hybridization buffer containing oligo B2, hybridization controls, and DMSO. Following incubation at 95°C and 45°C for 5 minutes each, 200 μL hybridization mix was loaded onto each array. Arrays were incubated for 16th in a GeneChip 645 hybridization oven (Affymetrix) at 45°C while rotating at 60 rpm. Wash/stain procedures were performed on an Affymetrix 450 Fluidics Station using manufacturer specified instrument protocol settings. To remove the unbound sample, arrays were washed with non-stringent wash-Buffer A. GeneChips® were then stained 10 min in Stain Cocktail 1. Excess stain was removed by a subsequent wash in Buffer A. Arrays were incubated 10 min with Stain Cocktail 2 followed by 10 min incubation with Stain Cocktail 1 for signal amplification. GeneChips were washed with Buffer B then filled with Array Holding Buffer prior to removal from the fluidics station and scanned using the GeneArray® 3000 scanner (see Affymetrix target hybridization protocol).

Both baseline measurements were combined as one factor to exclude non-HBOT related changes. A repeated measures one-way ANOVA was used to compare differentially expressed genes (DEG) FC between the 60th session measurement and baseline, post-treatment measurement and baseline. Then a Benjamini-Hochberg method [15] was applied on the calculated p-values to correct for false discovery rate. A change was considered significant if met the criterion P < 0.01 following a false discovery rate correction.

Unless otherwise specified (see above for transcriptome analysis), demographic continuous data are expressed as means ± standard-deviation. The Kolmogorov-Smirnov test was used to determine normal distribution for all variables.

Thirty-five individuals were assigned to HBOT. Five patients were excluded since they did not complete baseline assessments. All other 30 patients completed baseline evaluations the HBOT protocol. Three blood samples did not include RNA tubes and were excluded from analysis (Figure 1). The average age was 70.39 ± 3.72 and 51.9% were males. The baseline characteristics and comparison of the cohorts following exclusion of the patients are in Table 1. 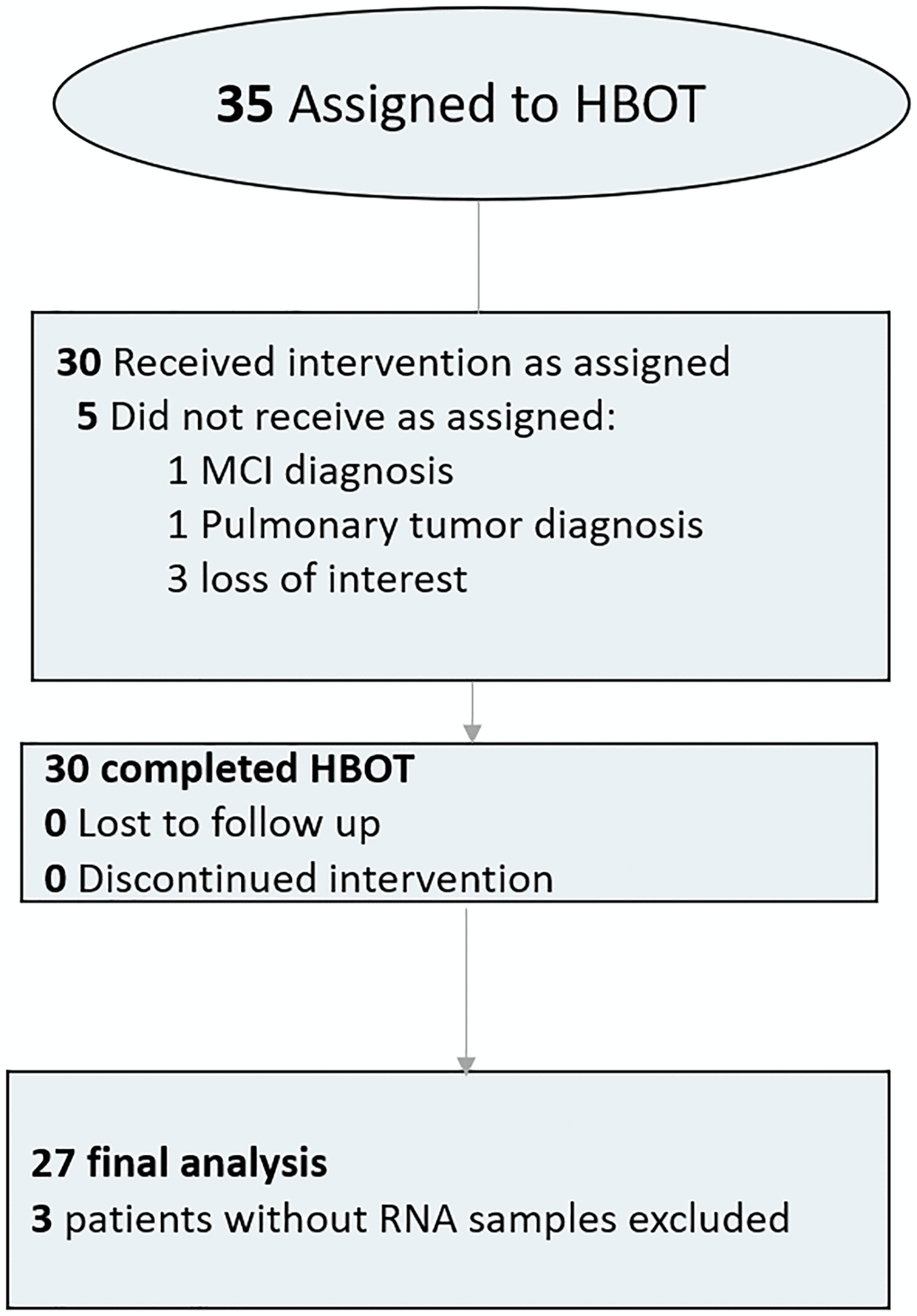 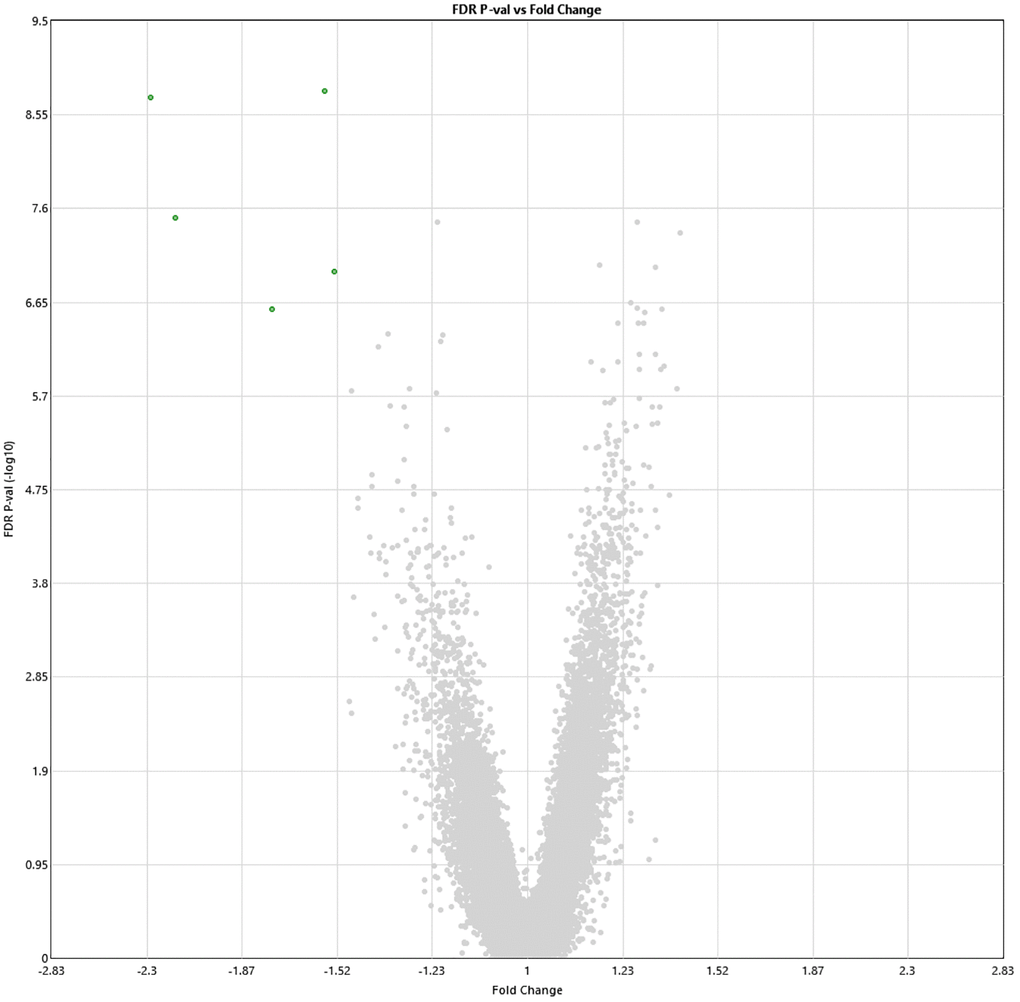 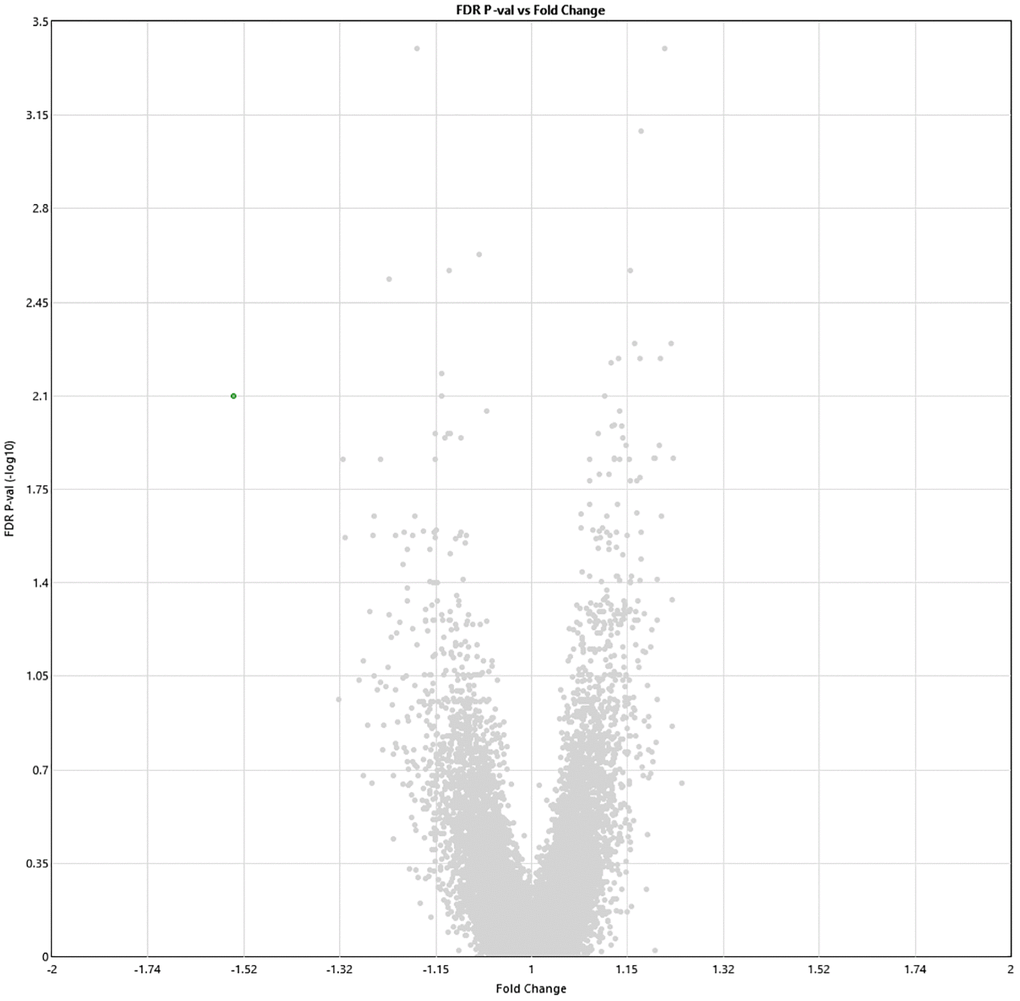 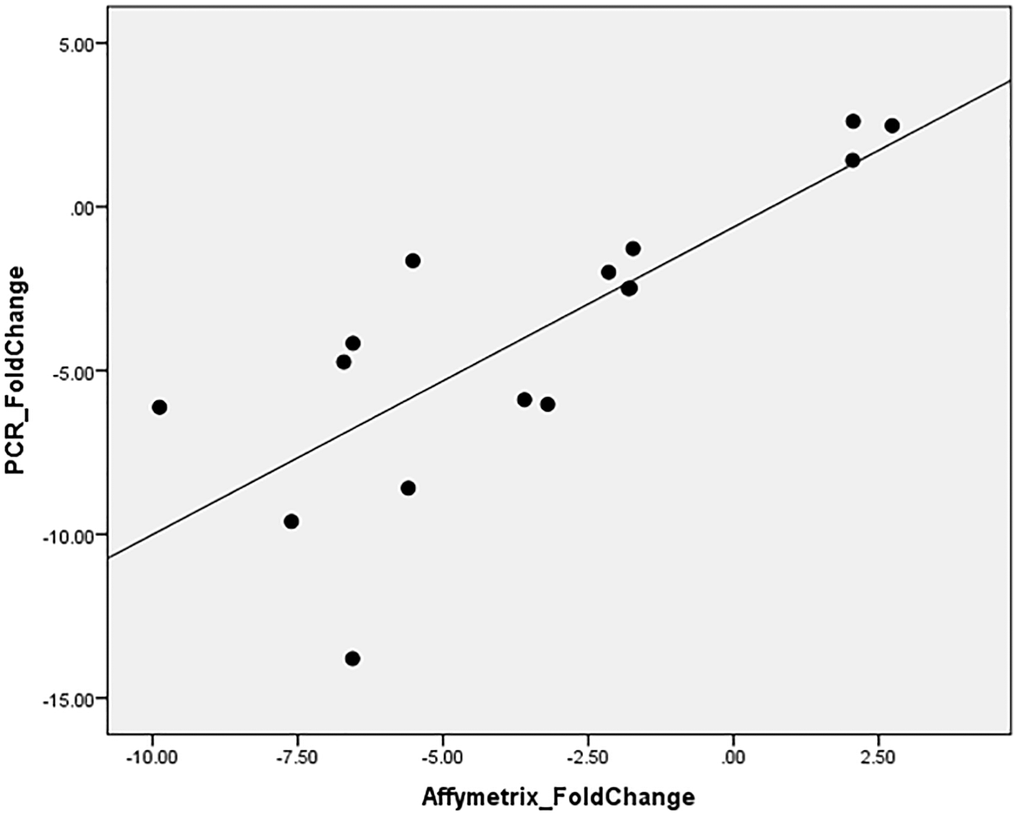 Due to the low number of significant DEGs (<10), functional enrichment and pathway enrichment could not be completed.

This longitudinal study of HBOT in healthy aging subjects demonstrates that HBOT strongly associated with blood cells gene expression profiles, as estimated by RNA microarrays. To the best of our knowledge, this serves as the first study assessing human in vivo HBOT-mediated changes in RNA expression. Most of the significant changes occurred during the HBOT program and normalized two weeks post-HBOT. However, 19 genes were significantly different even two weeks after the last HBOT session.

Multiple previous studies have demonstrated the effects of HBOT on single gene products in isolated cells [17–25]. Recently, gene array analyses have demonstrated differential gene expression of isolated cells exposed to either single hyperoxic exposure and/or high atmospheric pressure exposure [11–14]. Upregulated genes included anti-inflammatory and growth and repair hormones genes, while downregulated genes included apoptosis and pro-inflammation genes. However, isolated cell studies have significant disadvantages. First, in vitro oxygen diffusion is considerably different than in vivo diffusion. Obtaining rapid changes in PO2 within the cells/tissue culture medium proves to be difficult and limits a precise correlation between cellular processes/events and in environmental oxygen concentration changes [26, 27]. Second, the oxygen partial pressure that cells are truly exposed in vitro is significantly different than what is used in in vivo studies [28, 29]. Third, in vitro studies lack the microsystem interactions which occur in vivo. Fourth, gene expression was evaluated following a single hyperoxic exposure. The current clinical study, provides DEG, for the first time in humans, following 60 repeated hyperoxic exposures, both within 24 hours and two weeks after the last exposure.

HBOT is a well-established treatment modality for non-healing wounds, radiation injuries as well as different hypoxic or ischemic events (such as carbon monoxide toxicity, infections, etc.). In recent years, a growing body of evidence from preclinical as well as clinical trials demonstrates HBOT’s efficacy for neurological indications including post-stroke and post-traumatic brain injury [30–36], idiopathic sudden sensorineural hearing loss [37] central sensitization syndromes such as fibromyalgia [38, 39], age related cognitive decline [10] and animal models of Alzheimer’s disease [40]. For the first time, the current study aimed to evaluate the effects of HBOT on the transcriptome of aging humans without any functional limiting diseases.

With regards to ageing, Peters et al. identified 1497 genes that are differentially expressed as we chronologically age [2], out of which, 240 (16%) were differentially expressed in our study following the last HBOT session. For instance, polymorphism in the FOXO3 gene, which encodes forkhead box O-3 transcription factor has been associated with longevity in different human populations [41–43]. In the current study, FOXO3 gene expression changed by 1.22. RUNX3, a hematopoietic stem and progenitor cell factor whose levels decline with aging [44] increased by 1.29. It is important to note that these age genetic signatures generated by different groups show relatively little overlap with each other.

Whole blood transcriptomes are dynamic per definition and represent the cellular state at a certain point. Therefore, it is expected that most of the DEGs occurred during the repeated intermittent hyperbaric exposures, and gradually returned to their previous state two weeks following the last exposure. Previous studies have shown long-term systemic and cellular effects of HBOT, including angiogenesis, stem cells proliferation and mobilization and mitochondrial biogenesis [45] which may be partially explained by these DEGs. The effects last in the protein, tissue and system level compared with the temporal transcription level. ABCA13 is a member of the ATP binding cassette gene subfamily A (ABCA). High expression of ABCA13 has been demonstrated in prostate cancer, leukemia colorectal cancer, as well as several tumor cell lines in central nervous system [46–48]. Additionally, both schizophrenia and bipolar disorder were associated with ABCA13 high expression [48]. Interestingly, expression increases following an ischemic stroke. Lastly, ABCA13 has been shown to decrease significantly in bone-marrow derived mesenchymal stem cells [49]. It has been previously shown HBOT can induce significant recruitment and migration of bone-marrow derived stem cells, both hematopoietic [50] and mesenchymal types [51], which may partially explain the significant down regulation of ABCA13. ABCA13 was the single DEG which remained significant even two weeks following the last HBOT sessions.

The main limitations of the study are related to the lack of a placebo group, required for definitive causality of the observed transcriptome changes, and the relatively small sample size. Additionally, further study with longer observation time would shed better light on additional factors such as subject-specific expression levels differences and their relation to treatment response. These limitations are partially mitigated by the longitudinal design of the study with both the first and second baseline samples from each individual being combined to detect major changes associated with HBOT, rather than temporal/retest effects.

For the first time in humans, the study provides direct evidence of HBOT is associated with transcriptome changes in whole blood samples. Our results have demonstrated significant changes in specific gene expressions of normal aging adults.

We would like to thank Dr. Mechael Kanovsky for his editing of this manuscript.

The study was funded by a research grant from the Sagol network for neuroscience established by Mr. Sami Sagol.