Copyright: © 2021 Liang et al. This is an open access article distributed under the terms of the Creative Commons Attribution License (CC BY 3.0), which permits unrestricted use, distribution, and reproduction in any medium, provided the original author and source are credited.

Glioma is a primary intracranial tumor with high morbidity and mortality. We acquired miR-338-5p, which suppresses the development of glioma, from the GEO and CGGA databases. In addition, we predicted that hsa_circ_0072389, hsa_circ_0072386, hsa_circ_0008621, hsa_circ_0072387, and hsa_circ_0072391 could relieve the silencing of IKBIP by miR-338-5p. By analyzing genes related to IKBIP expression, possible pathways affecting glioma were identified. This study provides new ideas for investigating multiple circRNAs in ceRNAs.

Glioma is the most common primary malignant brain tumor and accounts for approximately half of all intracranial primary tumors [1]. The current effective treatment methods are surgery, radiotherapy, and chemotherapy, the survival of patients posttreatment is still suboptimal [2]. Fortunately, the development of molecular biotechnology provides new ideas for the diagnosis and treatment of glioma.

Circular RNA is a type of noncoding RNA lacking both a 5′ end cap and a 3′ end polytail that induces a circular RNA structure via covalent bonds [3]. Due to their closed circular structure, circRNAs are seldom degraded by exonuclease, which makes them more stable than linear RNAs [4]. An increasing number of studies show that circRNAs participate in the occurrence and development of a variety of cancers [5]. By regulating gene transcription, interacting with proteins, or translating into polypeptides, circRNAs can participate in the regulation of cancer [6, 7]. However, current research mainly regards circRNA as a competing endogenous RNA [8]. As miRNAs can not only silence downstream genes by targeting mRNAs but also bind sites located in circRNAs (miRNA response elements, MREs), circRNAs can prevent the suppression of target genes by competitively binding to miRNAs [9]. For example, Cen J et al. discovered that circular RNA circSDHC sponges adsorb miR-127-3p, which upregulates the expression of CDKN3 and E2F1 and promotes the proliferation and metastasis of renal cell carcinoma [10]. Chen LY et al. revealed that the circular RNA circ-ERBIN promoted colorectal cancer by sponging miR-125a-5p and miR-138-5p, thereby alleviating the silencing of 4EBP-1 [11]. According to multiple studies, we found that a miRNA could be sponged by multiple circRNAs in different cancers. For example, miR-942-5p could be adsorbed by hsa_circ_0015756 in ovarian cancer, circRNA-AKT1 in cervical cancer, and circ-CEP85L in gastric cancer [12–14]. However, studies of the mechanism by which multiple circRNAs regulate miRNAs in the same cancer have not been performed.

High-throughput data on circRNAs, miRNAs and mRNAs in glioma were obtained from the GEO database. The screening standard for circRNA was |logFC| ≥ 1.5 p <0.05 and |logFC| ≥ 2 p < 0.05 for miRNA and mRNA. The whole screening process was implemented with the limma R package [15].

Prediction of circRNAs and mRNAs

The prediction of circRNAs binding with miR-338-5p was based on the circBANK database (http://www.circbank.cn/), and mRNAs that targeted miR-338-5p were discovered according to the results from the miRwalk (http://mirwalk.umm.uni-heidelberg.de/), miRDB (http://mirdb.org/), and targetscan databases (http://www.targetscan.org/vert_72/). All these results indicated the presence of conserved 8-mer and 7-mer sites that match the seed region of miR-338-5p [16, 17].

Prediction of proteins bind to circRNA

The circinteractome database (https://circinteractome.nia.nih.gov/) was employed to reveal proteins that interact with circRNA. In addition, the TargetScan prediction tool enables the prediction and binding sites for RBPs on reported circRNAs that have yet to be mapped [18].

The protein–protein interaction (PPI) network was constructed by the STRING v11 database (https://string-db.org/) [20].

The correlation of gene expression

Pathway-related genes were obtained from the Pathcards database (https://pathcards.genecards.org/), and the correlation between IKBIP and gene expression in glioma was obtained through the GEPIA database.

The glioma cell Line U251 was cultured in MEM containing 10% fetal bovine serum and 1% glutamine, and the cell culture environment was 5% carbon dioxide in a 37°C incubator.

RNA was extracted by TRIzol reagent, and RT–qPCR was performed by a 7500 real-time PCR system (Thermo Fisher Scientific). The miR-338-5p inhibitor was obtained from Boshang Biotechnology (Shanghai). Taking GAPDH as a reference, the primer sequences were as follows:

A BCA Protein Detection Kit (Thermo Scientific™, Shanghai, China) was used to detect the protein concentration. SDS (5×) was added to the total protein, and the mixture was further heated at 100°C for 10 minutes. The protein was isolated by SDS–PAGE and transferred to polyvinylidene fluoride (PVDF) film. Five percent skim milk was sealed at room temperature for 2 hours and further incubated with primary antibody in a shaking bottle at 4°C for 8–12 hours. Then, we washed the film with Tris-buffered saline and Tween 20 (TBST) 3 times, and each wash lasted 10 minutes. After that, the secondary antibody was incubated with film at room temperature for 1 hour and washed with TBST once more 3 times (10 min each time). Proteins were observed by enhanced chemiluminescence.

The datasets used in the project are available from the corresponding author. The data that support the findings of this study are openly available in GEO at https://www.ncbi.nlm.nih.gov/geo/.

miR-338-5p inhibited the progression of glioma 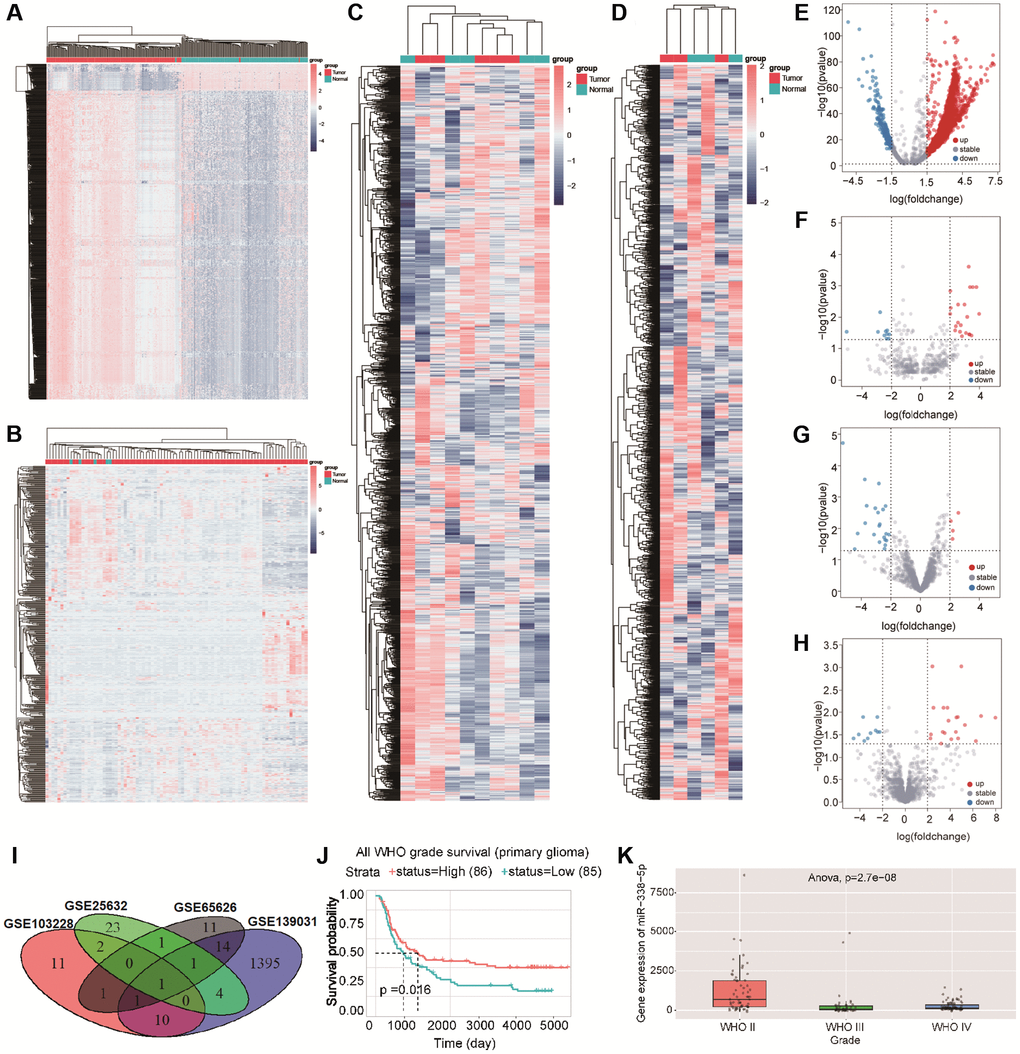 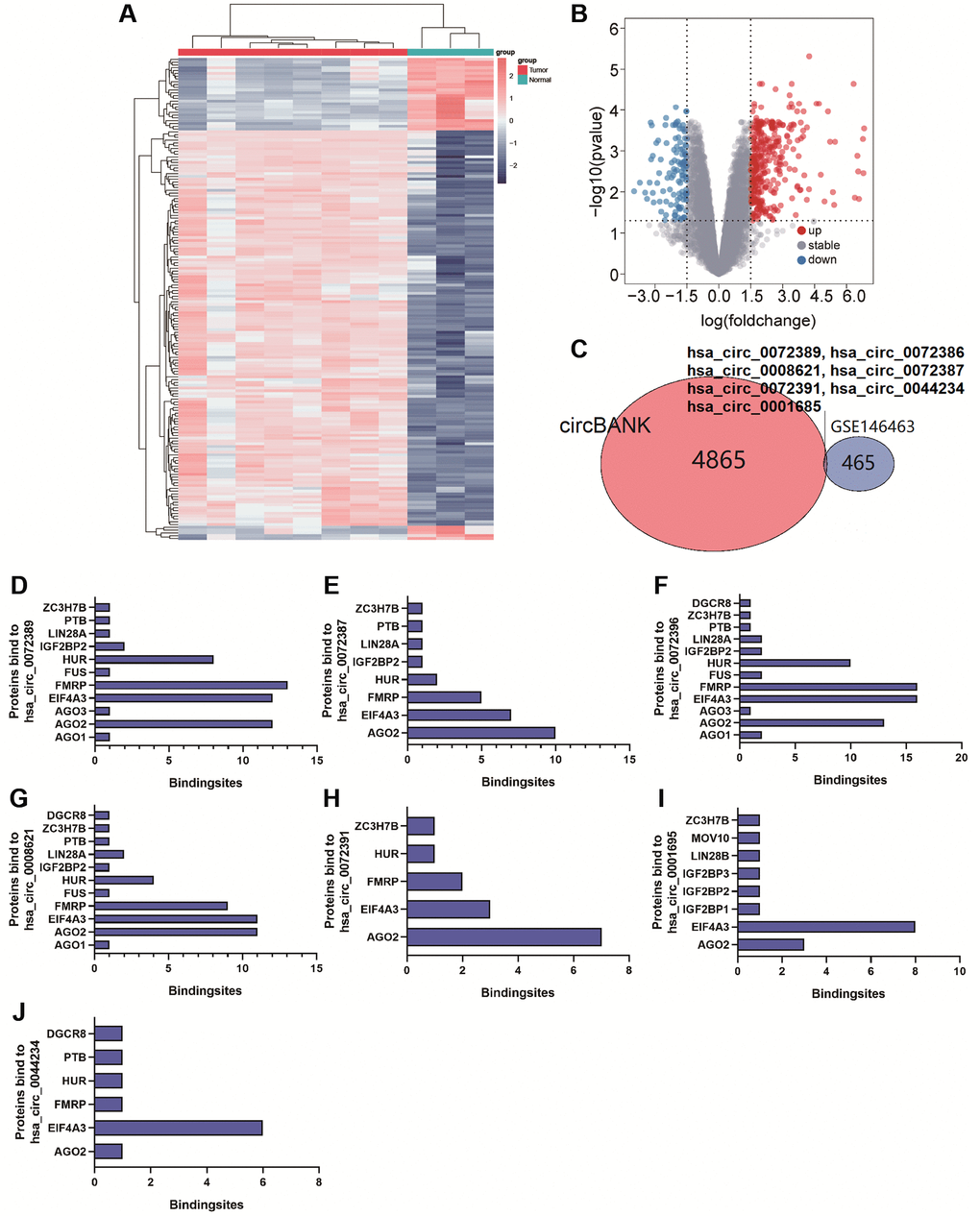 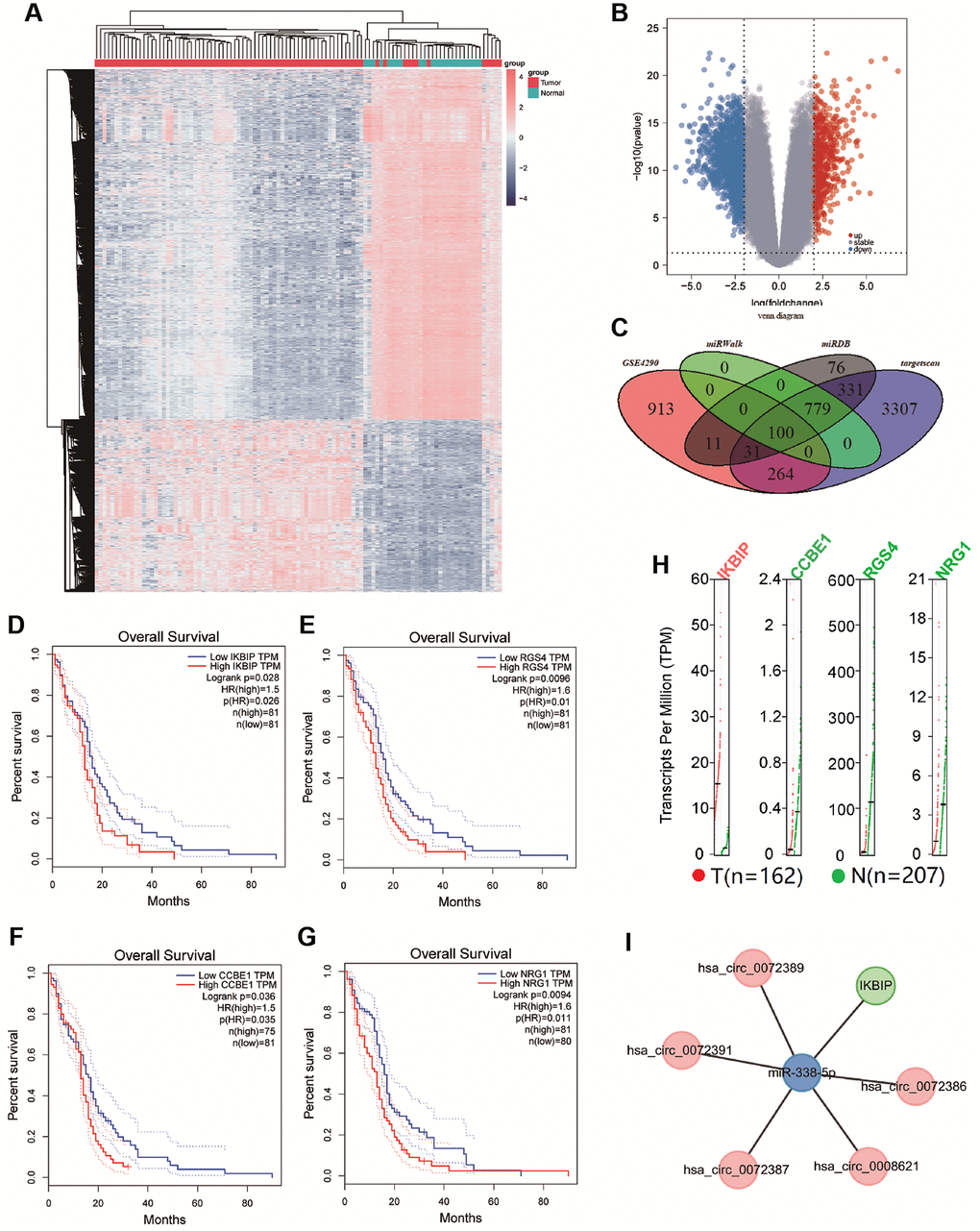 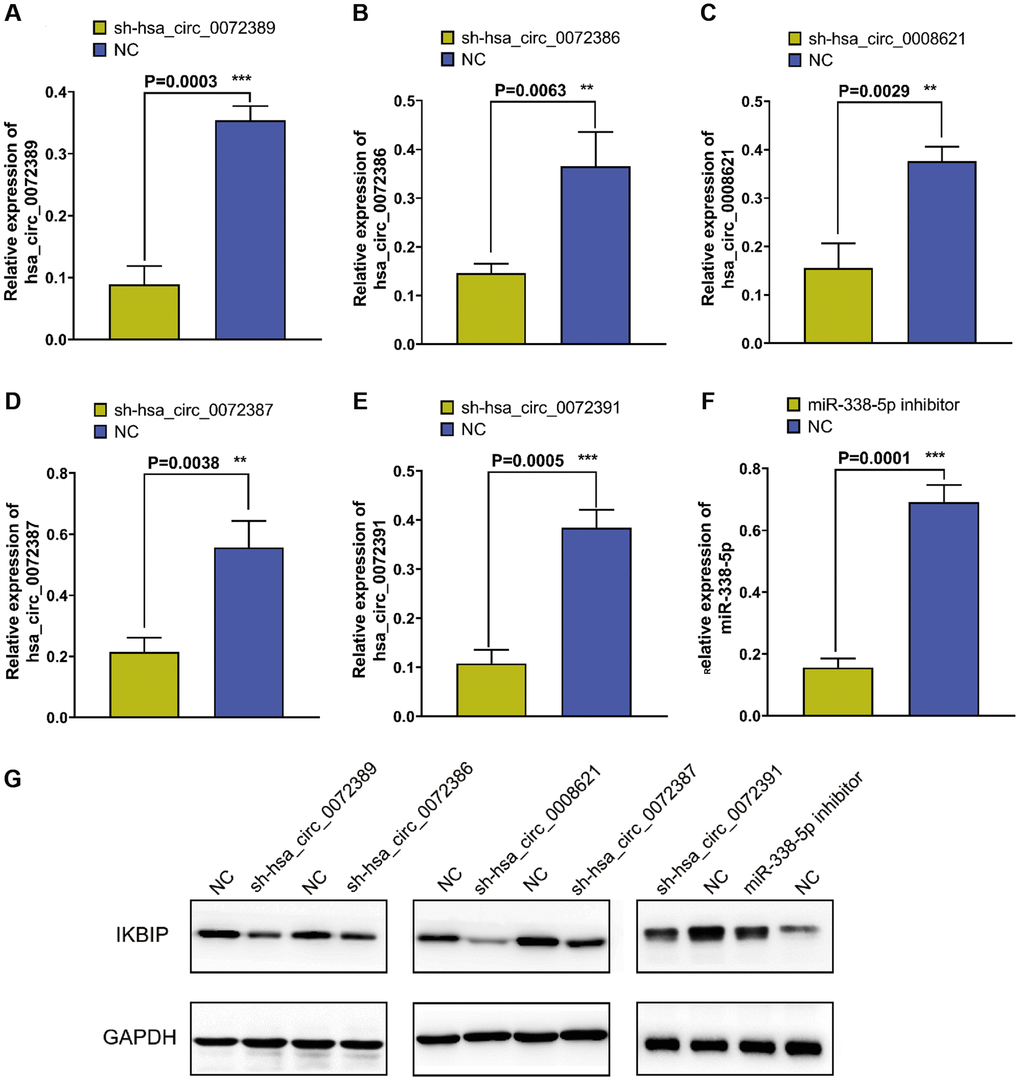 Pathways that may be affected by IKBIP in glioma 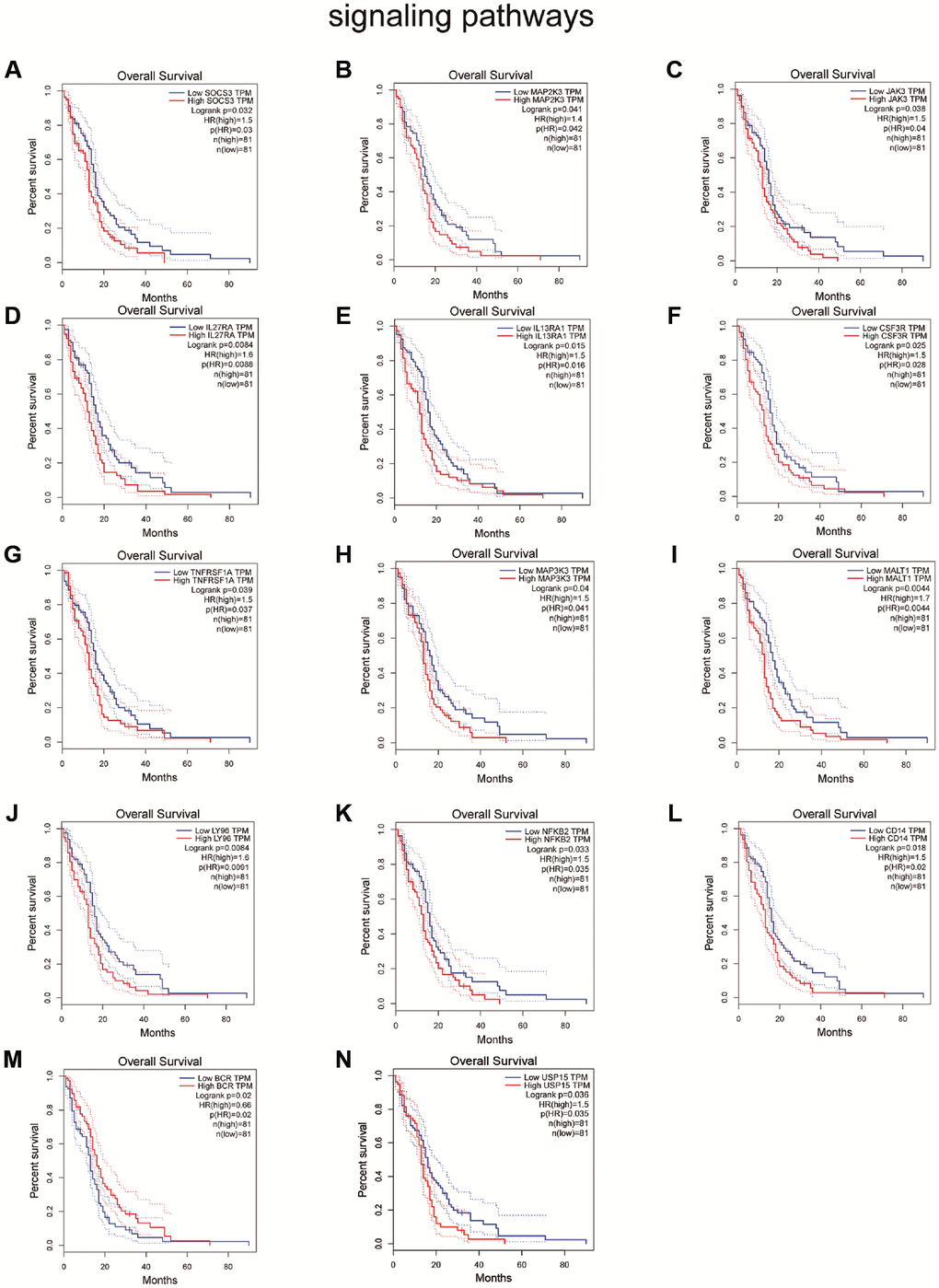 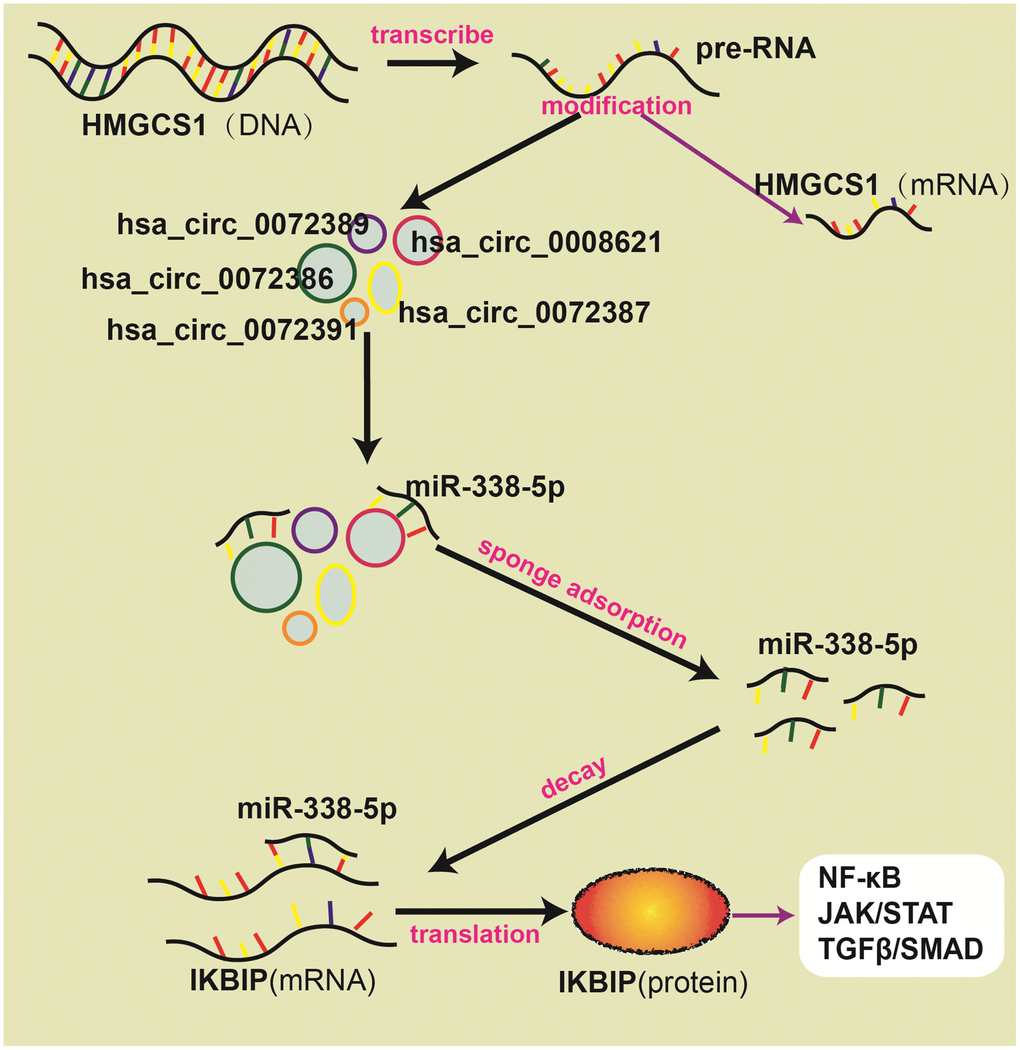 In most studies of ceRNAs in tumors, a single circRNA or mRNA could be screened from circRNA chips or mRNA chips. Then, the targeted miRNA could be predicted easily [31]. However, it was not determined whether a circRNA could only bind to a miRNA invariably [22]. Therefore, this study selected one miRNA, miR-338-5p, as the initial research object and analyzed relationships among circRNAs, miRNAs and mRNAs by exploring the circRNAs to which miR-338-5p may bind. In addition, all genes in 8 common pathways were screened to predict pathways that might be affected by IKBIP. We found that circRNAs (hsa_circ_0072389, hsa_circ_0072386, hsa_circ_0008621, hsa_circ_0072387, and hsa_circ_007239) that bind to miR-338-5p in glioma were all transcribed from the same host gene HMGCS1. In addition, these circRNAs all contained exons 4 and 5. Through the GEPIA database, we found that the change in HMGCS1 mRNA expression in glioma was not statistically significant when compared with the control group. Therefore, we speculated that pre-RNA splicing of hsa_circ_0072389, hsa_circ_0072386, hsa_circ_0008621, hsa_circ_0072387, and hsa_circ_007239 increased with the progression of glioma. As a large-scale research study based on bioinformatics analysis, this work inevitably lacks sufficient experimental verification, so we need to confirm its authenticity in future research. In addition, due to the lack of glioma data in the GEO and TCGA databases, follow-up data of patients are insufficient. Furthermore, although we revealed that hsa_circ_0072389, hsa_circ_0072386, hsa_circ_0008621, hsa_circ_0072387, and hsa_circ_007239 all originate from the same host gene HMGCS1, limited expression data of circRNAs in glioma prevents us from further investigating differences among these five circRNAs. We suspect that the five circRNAs may be differentially expressed not only in diverse grades or prognostic stages of glioma but also in exosomes, cytoplasm or blood, which play significant roles in different times or spaces. In summary, our study provides a novel idea for the study of the complex network among circRNAs-miRNAs-mRNAs, and we also hope to verify the interaction mechanisms among multiple circRNAs, multiple miRNAs, and multiple mRNAs in our future research.

This work is supported by grants from Science and Technology Program of Shenzhen (GJHZ20190821161601670). Thanks Jinan University and Shenzhen People’s Hospital for their education and support. Thanks all members for their efforts in this research.