Copyright: © 2021 Karikkineth et al. This is an open access article distributed under the terms of the Creative Commons Attribution License (CC BY 3.0), which permits unrestricted use, distribution, and reproduction in any medium, provided the original author and source are credited.

Taste is one of the five fundamental primary senses and plays a crucial role in our interactions with the environment. Increased interest in research related to both taste and smell has now been fueled by the present SARS-CoV-2 pandemic because as many as 80% of people infected report taste and smell loss and/or changes [1]. An unknown but increasing percentage of people with long-Covid syndrome also continue to report taste and smell changes.

Taste signaling begins in specialized chemosensory taste receptor cells within taste buds that are located within specialized structures called taste papillae on our tongues [2]. Fungiform papillae, one type of taste papillae, are densely packed on the anterior tongue (Figure 1A). There is a wide variation in the number of fungiform papillae across individuals, with reported estimates ranging from less than 10/cm2 to greater than 200/cm2 [3, 4]. The underlying reason for this wide variation is not clear. Studies in different populations have suggested that fungiform papillae density declines with aging. However, most of the published studies on the association of fungiform papillae density with age to date have been cross-sectional [4], and mostly in small study populations of less than a hundred individuals [5–7]. These studies are unable to distinguish between age related changes and cohort effects. One study which looked at longitudinal changes of fungiform papillae density examined a narrow age cohort, and was mainly designed to look at changes with obesity rather than longitudinal changes with age [8]. 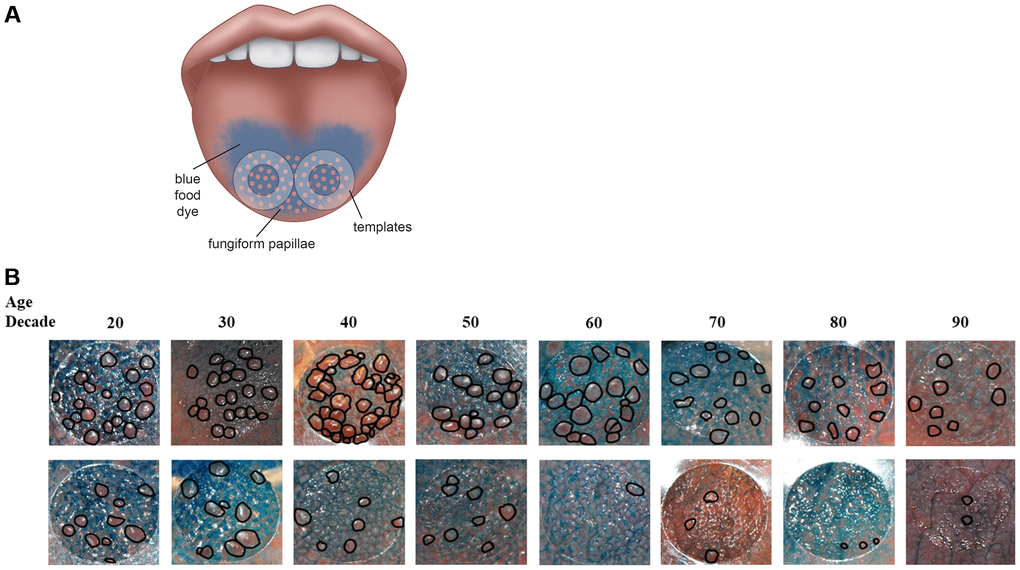 In longitudinal models (Table 3, Model 1), fungiform papillae density decreased with time of follow-up at a rate of approximately 6.46 papillae/cm2 per decade (p < 0.001). There was no interaction between the baseline age and time variable, indicating that the rate of decline was similar at all ages. The rate of decline in men and women over follow-up time was similar (Figure 2), indicated by the non-significant Sex X Time interaction term (p > 0.05). Similarly, interaction of race with time was not significant (p > 0.05), indicating that the decline in fungiform papillae density over time did not differ by race. 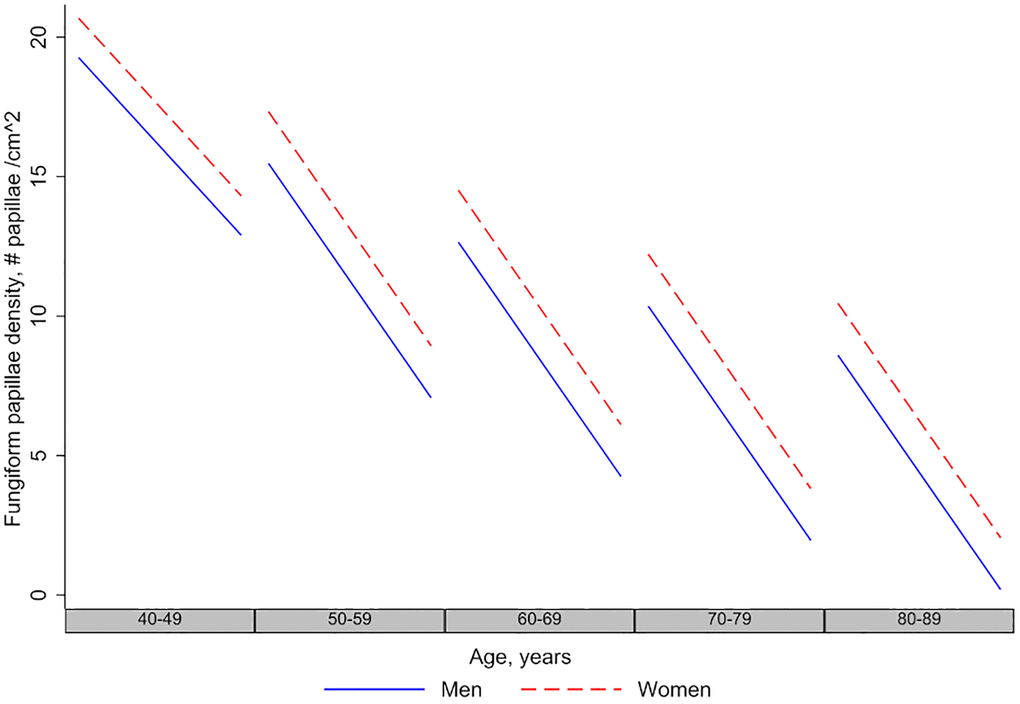 None of the anthropometric measures had a significant interaction with follow-up time (all p > 0.05), which means that they did not affect the fungiform papillae density rate of decline. Similarly, none of the smoking variables and none of the alcohol use variables affected the rate of decline, either tested in the model one at a time or together in a multivariate model (Tables 4–6).

Therefore, with fungiform papillae possibly being endocrine organs, decrease in the density or number of fungiform papillae might be an indicator of health for multiple cellular systems at the local level, as well as body systems such as the cardiovascular, peripheral nervous system, endocrine system, or metabolic system; this raises the question of whether fungiform papillae density and taste function could be a marker of aging. Interestingly, certain haplotypes of the TAS2R38 receptor have recently been found to be associated with longevity [43].

The etiology of the sex differences is not clear. It could be related to the sex hormones estrogen and progesterone, as demonstrated by changes in taste intensity and hedonic preferences in pregnancy, such as an increase in bitter intensity [45]. Sex steroid hormones have been shown to affect gustatory processing at the levels of the taste receptor, peripheral nerve, and the central nervous system, with receptors for sex hormones prominently present in several nuclei associated with central gustatory pathways [46].

Kaufman et al. found that mice fed with a high fat diet became obese and had a lower fungiform papillae density [51]; this association appeared to be mediated via inflammation, specifically TNF-alpha. However, studies showed mixed results when conducted among humans. A higher BMI was not associated with a lower fungiform papillae density. On the other hand, a study using a cohort of college-aged students found that an increase in neck circumference, taken as surrogate biomarker of obesity, was associated with a longitudinal decrease in fungiform papillae density [8]. However, neck circumference could be affected by other factors such as alcohol use and could be an indicator of other disease conditions such as sleep apnea or cardiovascular disease, which may also affect fungiform papillae density. In addition, the age range of the college-aged cohort studied was narrow. Finally, there are significant differences between the biological systems for taste in mice and men. In our study, we examined a large number of participants from a broad age range, adjusting for age, sex, and race. We also examined obesity in a variety of ways, using indicators of overall obesity as well as central adiposity, and using continuous as well as categorical measures. Our participants also had a broad range of BMI and waist hip ratios.

While obesity may not be related to fungiform papillae density over time, it is still possible that the reverse is true i.e., that fungiform papillae density may be predictive of weight gain over time, and this needs to be examined in future studies. fungiform papillae density has been shown to be associated with taste intensity [3, 10], and it seems plausible that taste and resulting dietary preferences could be associated with weight gain and obesity over time. While choosing a healthy diet high in fruits and vegetables is associated with smaller gains in BMI and waist circumference [52], those prone to obesity may have a heightened hedonic response to unhealthy foods such as sweet and salty food [16, 53, 54], or energy dense foods in general [31].

Current smokers and those who quit less than 10 years ago had a lower fungiform papillae density cross-sectionally in our study. This is in contrast to some previous studies [55], but consistent with more recent studies [4, 29]. Smokers have also been shown to have higher electrogustatory thresholds and lower taste sensitivity than non-smokers [16].

However, none of the various smoking measures that we used were associated with longitudinal changes in fungiform papillae density. Nevertheless, these results should be considered with caution because the BLSA population tend to be healthy, with a low prevalence of smokers and especially, of heavy smokers. Therefore, the lack of significant longitudinal association could be due to the small proportion of smokers that we had, although the association we observed cross-sectionally with categories of smoking status would argue against that. It is also possible that the reverse is true in that fungiform papillae density, through its associations with taste intensity, could be associated with changes in smoking preferences over time.

The strengths of our study include a well characterized cohort of over 1000 participants with wide age-range and multiple follow-up visits. More importantly, this is the first study to follow fungiform papillae density longitudinally and the first to provide a precious opportunity to distinguish effects of aging from cohort effects. However, our study has limitations. The morphology of the fungiform papillae varies among individuals and distinction between fungiform papillae and other papillae becomes less obvious with age, which may introduce variability into the counting of fungiform papillae.

Participants were selected from the BLSA, a study of normative human aging established in 1958, with a well-characterized cohort, and currently conducted by the Intramural Research Program of NIA. Participants are followed for life every 1 to 4 years, depending on age. The BLSA protocol was approved by the Institutional Review Board of the National Institutes of Health and written informed consent was obtained from all participants at each visit. Eligible participants for this study had to have measures of fungiform papillae density, and have anthropometric measures detailed below.

In the BLSA, we began to quantify fungiform papillae density in 2011 using modified procedure originally developed by Miller and Reedy [33]. Briefly, blue food coloring is used to provide optimal contrast between fungiform papillae (which do not take up blue dye and appear pink) and other tongue structures (coated blue). Two clear plastic hole reinforcement templates (7 mm inner diameter) are placed posterior to the apex of the tongue with one template on each side of the median sulcus (Figure 1A). Tongue images containing the two templates were taken using a digital camera. The fungiform papillae present within the two 7 mm holes were then counted and normalized to the area of the holes and expressed as fungiform papillae density (number of fungiform papillae/cm2).

Weight was measured in kilograms and height in centimeters. Body mass index (BMI) was calculated as weight in kilograms divided by the square of height in meters. BMI was used both as a continuous variable, as well as a categorical variable, defined as either obese (BMI > 30 kg/m2) or not obese (BMI ≤ 30 kg/m2). Waist circumference was measured as the minimal abdominal circumference between the lower edge of the rib cage and the iliac crests. The hip was defined as the maximal circumference around the gluteal muscles below the iliac crests. Waist hip ratio was then calculated, as a continuous measure, by dividing waist circumference by hip circumference.

Smoking status was examined two different ways. One method is to defined smoking using a categorical variable – “never smoker”, “quit more than 10 years ago”, “quit less than 10 years ago”, or “current smoker”. We also coded smoking as pack years of smoking, calculated as average number of packs of cigarettes smoked multiplied by years of use. Those who had never smoked were coded as 0 pack years.

First, we compared baseline characteristics between men and women using Student’s t-tests and chi-squared tests for continuous variables and categorical variables, respectively. Then we examined the baseline cross-sectional associations of fungiform papillae density with various covariates using age- and sex-adjusted linear regression models. Finally, we tested for longitudinal changes and determinants of fungiform papillae density using linear mixed effects models, which can handle unbalanced, unequally spaced observations that are typical of a longitudinal study such as the BLSA.

The authors would like to thank all the personnel, staff, and participants who were involved in the study. The authors are especially grateful to Lauren Brick of the NIDA/NIA Visual Media Section for illustrating the graphic figure in Figure 1A.