Copyright: © 2022 Hong et al. This is an open access article distributed under the terms of the Creative Commons Attribution License (CC BY 3.0), which permits unrestricted use, distribution, and reproduction in any medium, provided the original author and source are credited.

Methods: Original data were download from The Cancer Genome Atlas (TCGA) and the Gene Expression Omnibus (GEO). The analyses were performed using perl-5.32 and R-x64-4.1.1.

Conclusions: We established a comprehensive model that can predict prognosis and guide treatment.

Breast cancer is the most commonly diagnosed malignancy and cause of cancer-related deaths in females [1]. According to the statistics from 2020, approximately 276,480 female breast cancers were diagnosed in the US, and 42,170 patients are expected to die from breast cancer [2]. Despite early diagnosis, abundant treatments, and a decline in the mortality rate of this disease over the past year, patients with advanced and metastatic breast cancer still experience a high mortality rate [3]. Therefore, an effective risk model for breast cancer can play a vital role in individualized therapy.

Breast cancer is strongly correlated with changes in gene status, such as amplifications, downregulation, and mutations. Traditionally, according to immunohistochemistry for estrogen receptor (ER), progesterone receptor (PR), and human epidermal growth factor receptor2 (HER2), breast cancer is classified into the luminal A, luminal B, HER2-positive, and triple-negative subtypes [4]. However, with further exploration of the molecular mechanisms of breast cancer, more detailed molecular types have been presented, such as luminal A, luminal B, HER2-enriched, basal-like, normal-like, and claudin-low [5]. Different subtypes have been confirmed to have different prognoses and drug responses. With advances in statistical analysis, multigene signatures are widely used to predict patient prognosis and drug response [6, 7]. Some multigene prediction models, such as the Oncotype DX 21-gene test, Prediction Analysis of Microarray 50, and 70-gene signature (MammaPrint), have been applied in the clinic [8–10]. The Oncotype DX 21-gene test can evaluate the tumor recurrence and predict chemotherapy responses in patients with ER-positive breast cancer. MammaPrint signature and PAM50 can improve prognostic prediction in breast cancer patients. Nonetheless, despite their high power, these tools only consider gene status, and thus, a model with comprehensive consideration of additional factors is urgently needed.

To identify the DEGs, we used a multi-step approach (Figure 1). The limma and sva R packages were used for the differential expression analysis (log fold change [FC] >1, false discovery rate [FDR] < 0.05) and batch correction for the TCGA-BRCA [11–15] (Supplementary File 1). 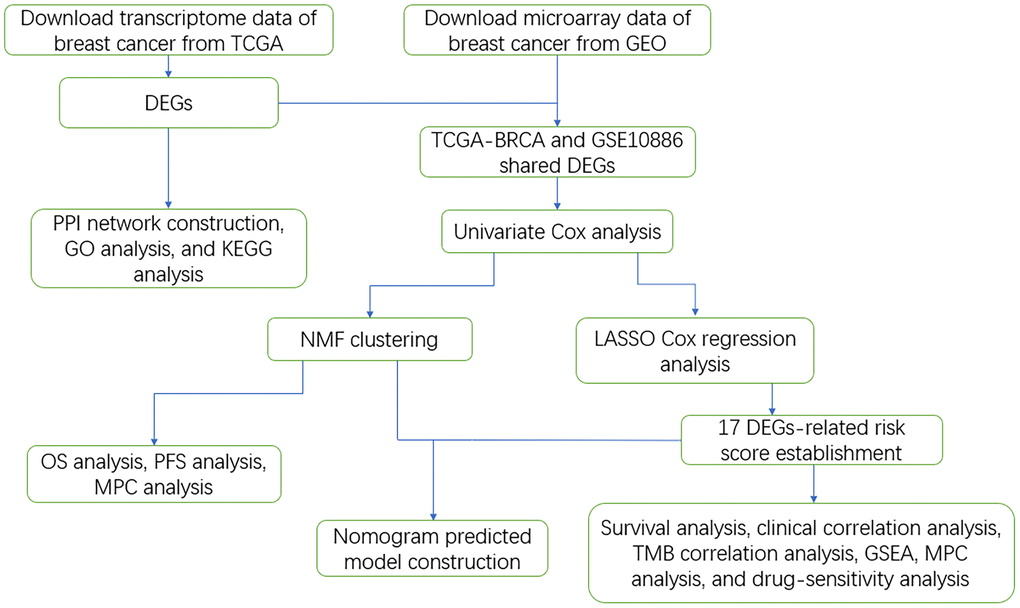 Figure 1. Work flowchart of the study.

First, we intersected the TCGA-BRCA and GSE10886 data to obtain the shared DEGs; then, we analyzed the DEGs using the survival and NMF R packages (Supplementary File 1), through which eight distinct subtypes were identified according to the cophenetic correlation coefficient for the cluster number from 2–10 [19]. Second, the overall survival (OS) and progression-free survival (PFS) differences among these subtypes, as observed by Kaplan-Meier (K-M) analysis and log-rank test, were analyzed using the survival and survminer R packages [20] (Supplementary File 1). Third, the analysis of microenvironment cell populations (MCP) differences among these subtypes was performed using the limma, ggpubr, and MCPcounter R packages [21] (Supplementary File 1).

Based on the DEG data, a univariate Cox analysis was performed to identify the survival related genes (P < 0.05). A modified LASSO regression analysis was conducted to find the genes most relevant to the OS of breast cancer patients (P < 0.05) [22–24] (Supplementary File 1). To verify the accuracy of our risk score predictor, analyses of training, and test groups were performed using data that were randomly obtained from the whole group. The predictive ability of the risk score was evaluated by survival probability curve, receiver operating characteristic (ROC) curve, and the area under the curve (AUC) [25] (Supplementary File 1). The risk computing formula is as follows: Risk score . In addition, univariate and multivariate analyses were performed to demonstrate the independent predictive ability of the risk score. A nomogram prediction model was established using clinical characteristics, NMF clustering, and risk score to predict the survival of breast cancer patients; the nomogram-predicted probability of the 1-, 3-, and 5-year OS is shown by the calibration curve [26]. To identify the superiority of the nomogram, a decision curve analysis (DCA) was conducted [27] (Supplementary File 1). The R packages survival, survminer, caret, glmnet, timeROC, ggDCA, regplot, and rms were used for these analyses (Supplementary File 1).

Gene set enrichment analysis (GSEA) was conducted between low- and high-risk score subsets [28] (Supplementary File 1). The “c2.cp.kegg.v7.4.symbols.gmt” was obtained from (https://www.gsea-msigdb.org/gsea/index.jsp). Signaling pathways with P < 0.05 and FDR < 0.05 were considered enriched.

We predicted the drug response in breast cancer patients based on the Genomics of Drug Sensitivity in Cancer database [33]. Six common chemotherapeutic and immunotherapeutic drugs (paclitaxel, cytarabine, camptothecin, lapatinib, erlotinib, and gefitinib) were selected for the analysis. The R package pRRophetic was used to conduct the analysis [34] (Supplementary File 1). The inhibitory concentration (IC50) was assessed to determine the drug sensitivities. ComBat was used to adjust for batch effects, and the average expression was calculated for repeated genes.

TCGA, GEO, THPA, and GSEA belong to public databases. Patients involved in them all had ethical approval. All analyses of us were based on them, therefore, no ethical issues existed.

The expression of 1086 DEGs was founded in the TCGA-BRCA cohort by comparing breast cancer tissue (1096 tumor samples) with normal tissue (112 normal breast samples) (Figure 2A, 2B). 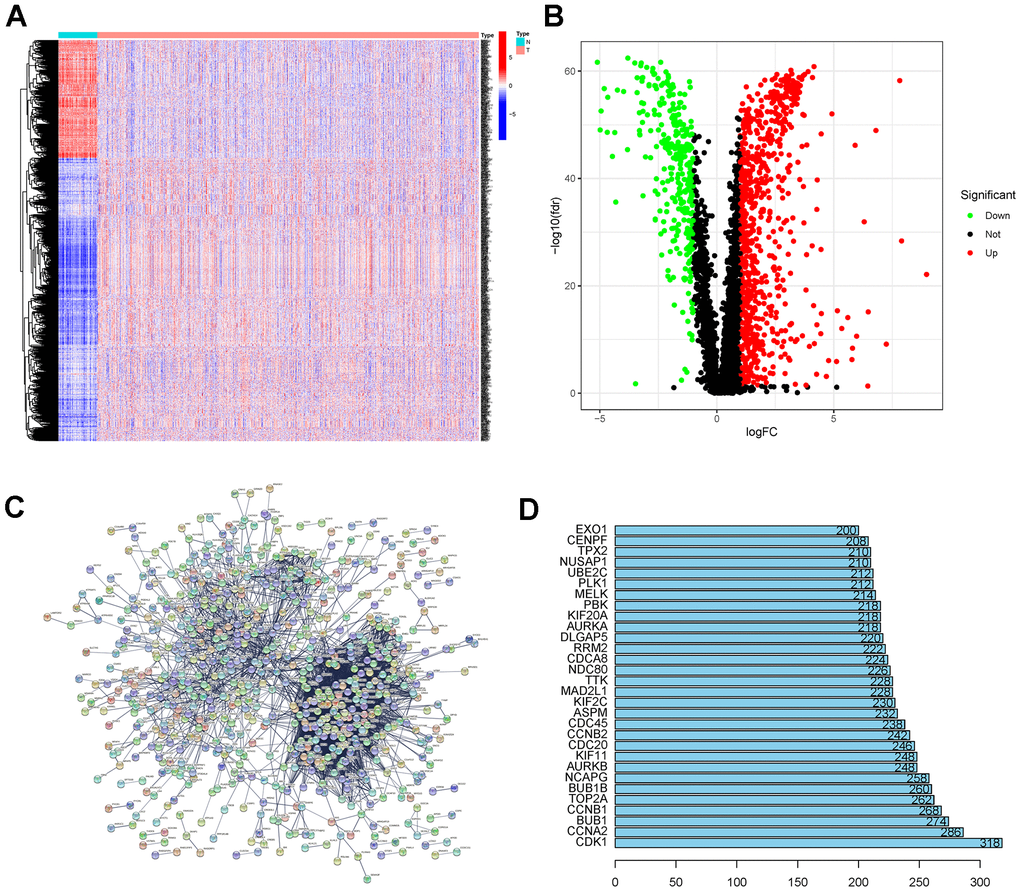 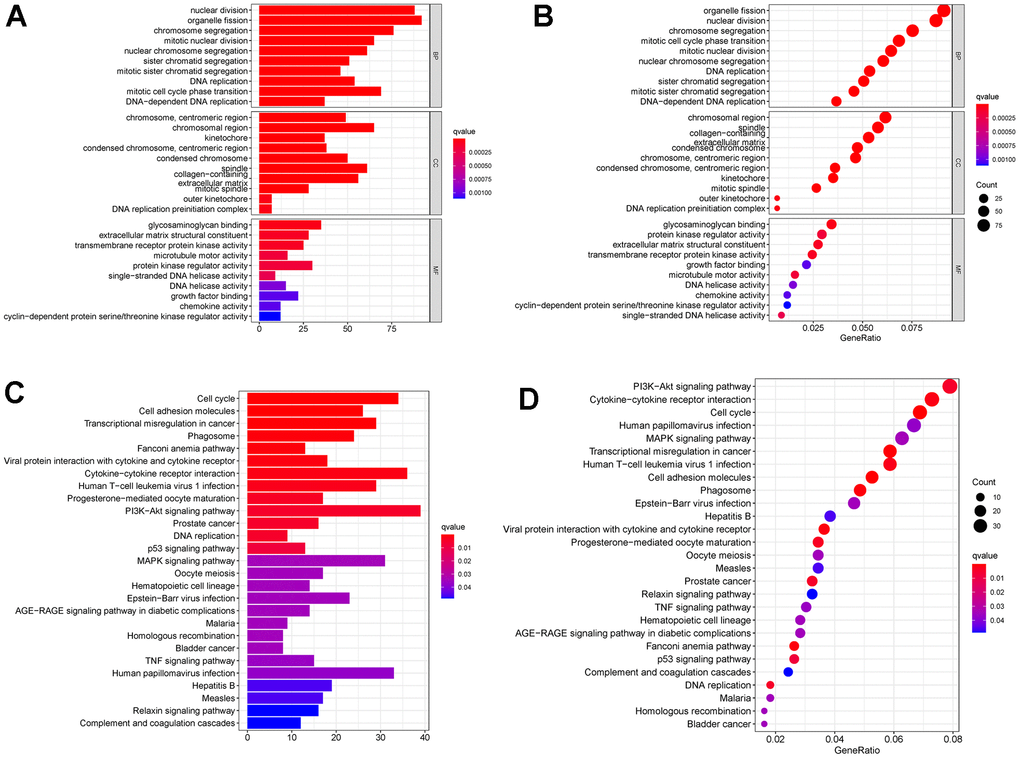 First, a univariate Cox regression analysis was performed using the data of the DEGs to increase the robustness of our cluster (P < 0.01). The NMF algorithm was then used to cluster the breast cancer cases based on gene expression, survival time, and survival status. We identified the optimal k value of 8 with the cophenetic correlation coefficients, and confirmed that the optimal cluster number was 8 (Figure 4A). As shown in Figure 4B, the boundaries of the eight subtypes (C1-C8) are clear, which indicates that the clustering is relatively reliable. According to the OS and PFS curves (Figure 4C, 4D), C4 and C5 breast cancer is associated with the best prognosis, and C6 breast cancer patients have the worst (P < 0.01). MCP counting for eight tissue-infiltrating immune cell types (B lineage, monocytic lineage, cytotoxic lymphocytes, neutrophils, myeloid dendritic cells, NK cells, T cells, and CD8+ T cells) and two stromal cell types (fibroblasts and endothelial cells) was performing using the R package MCPcounter (Supplementary File 1). We found that C1 had the greatest abundance of these cells, except neutrophils, in the microenvironment (Figures 4, 5). Moreover, fibroblasts, endothelial cells, and neutrophils were significantly high in C5, while tissue-infiltrating immune cells were significantly low in C6 (Figure 5B, 5C, 5F). 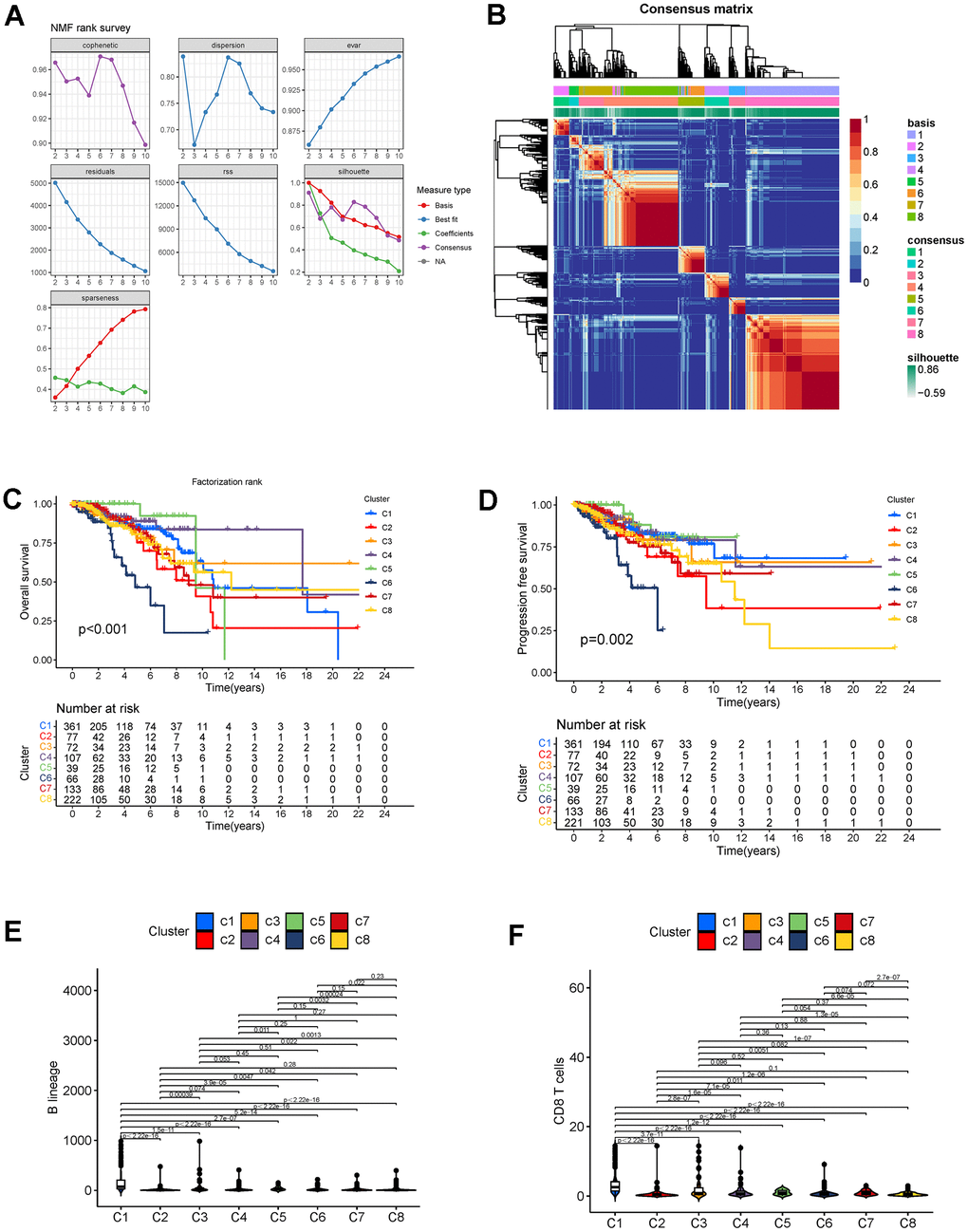 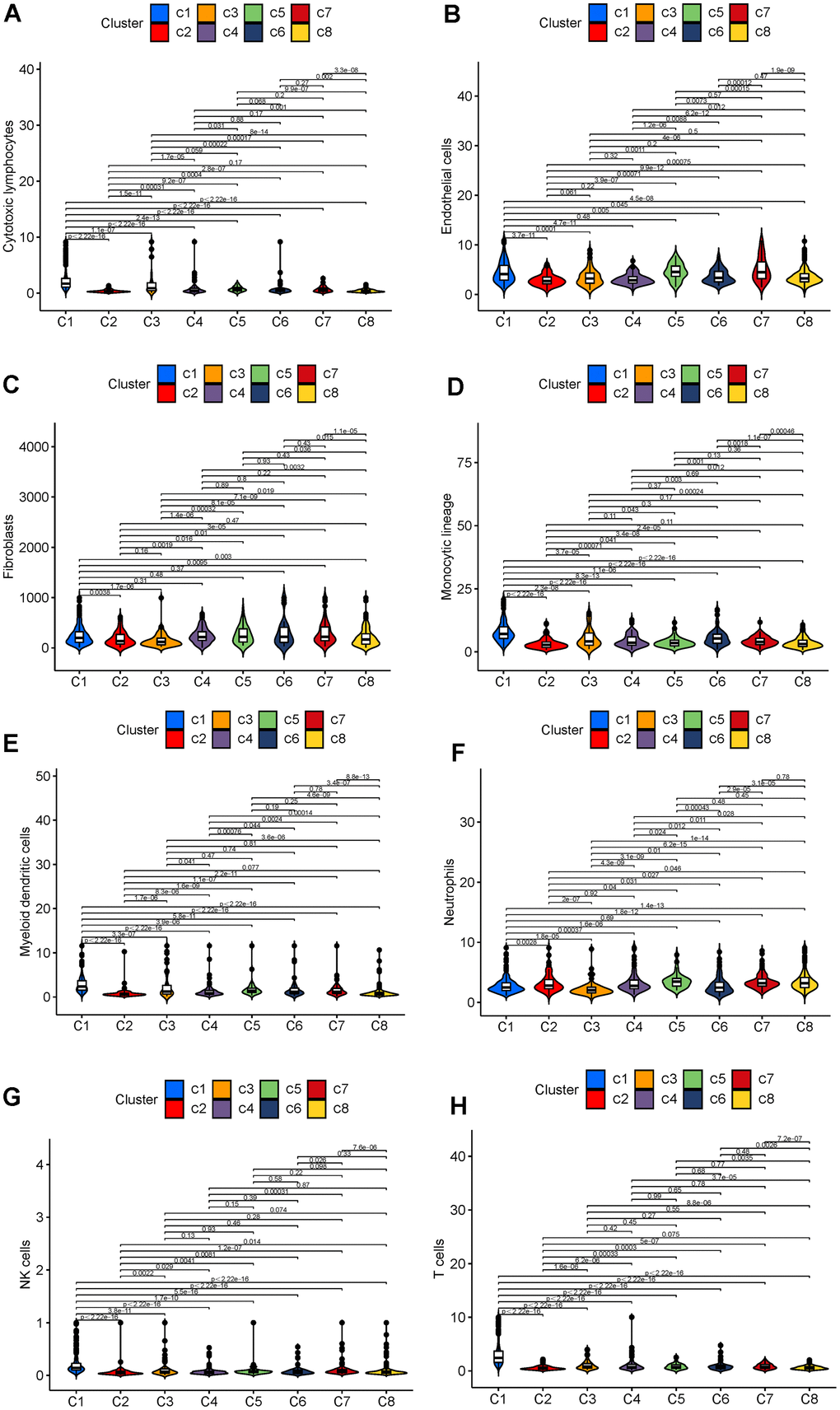 Construction of the prognostic model 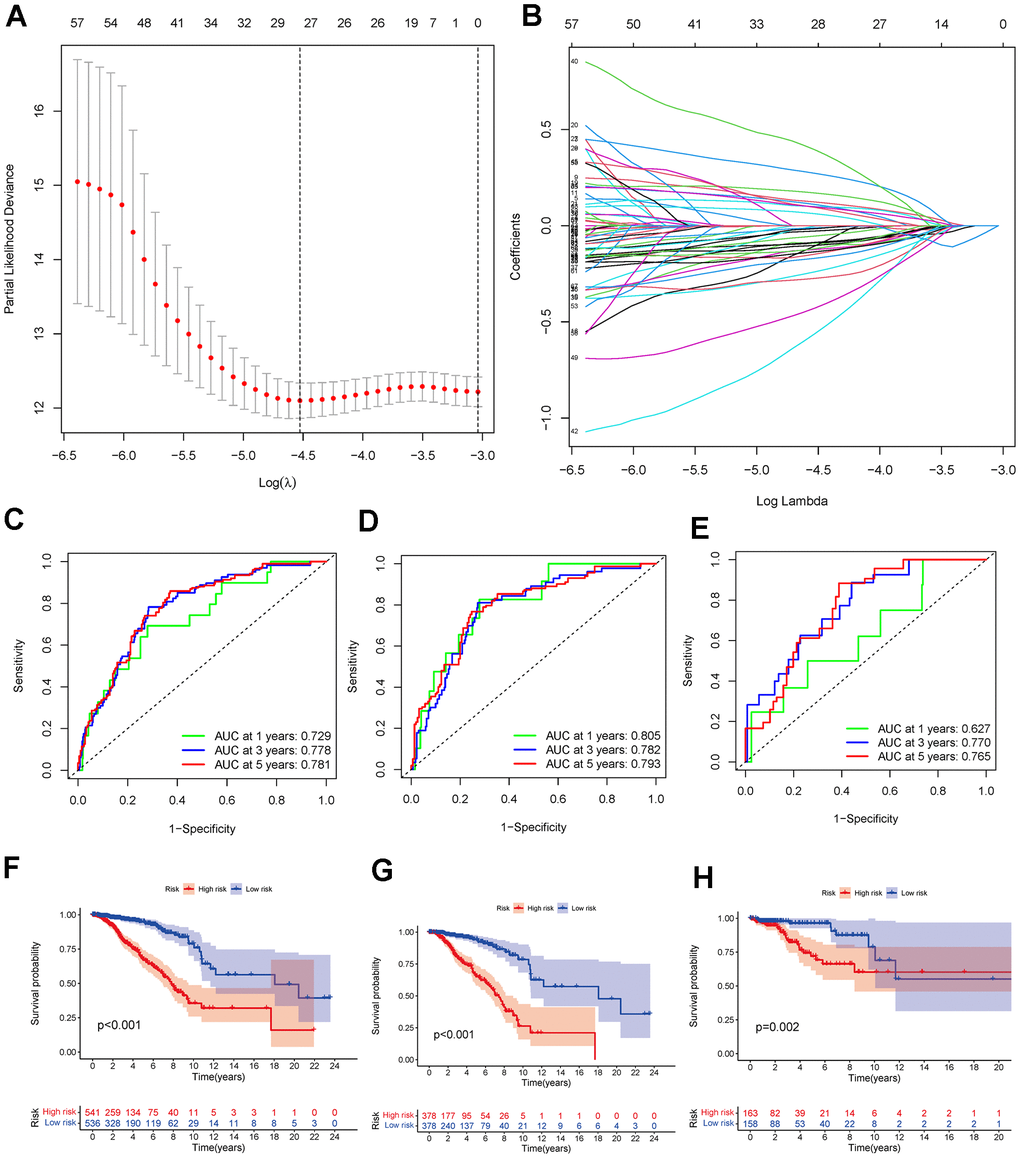 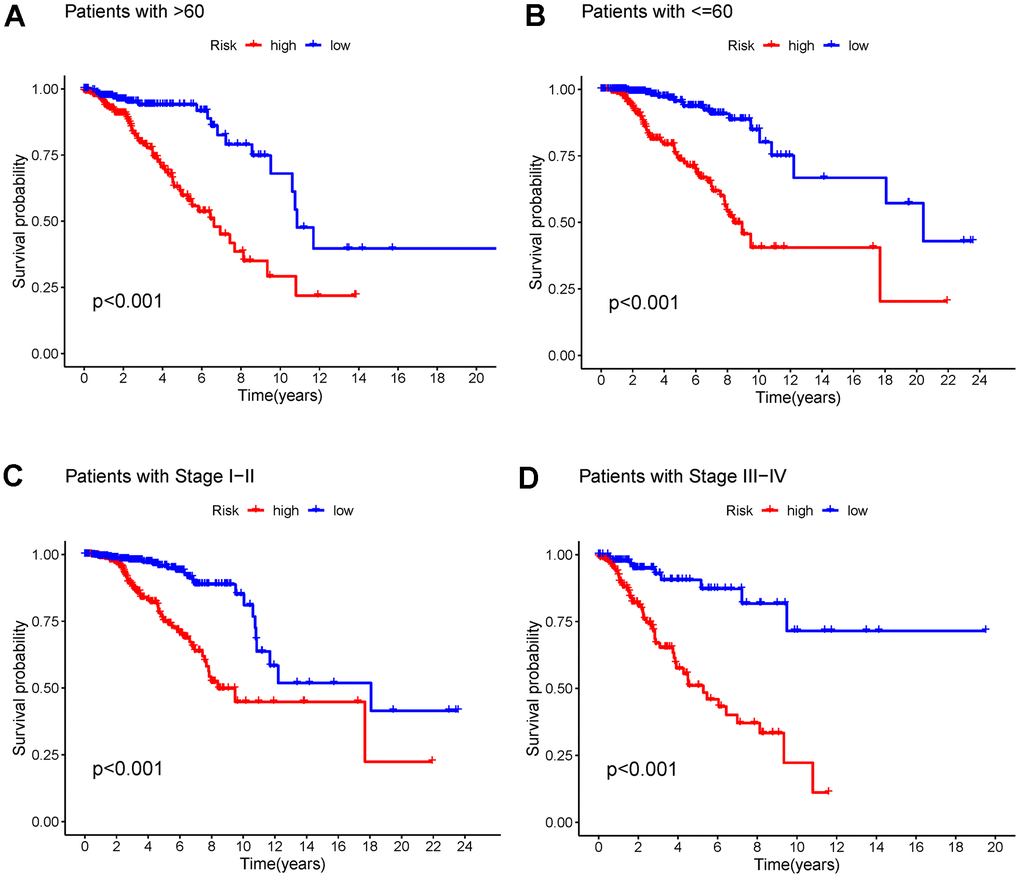 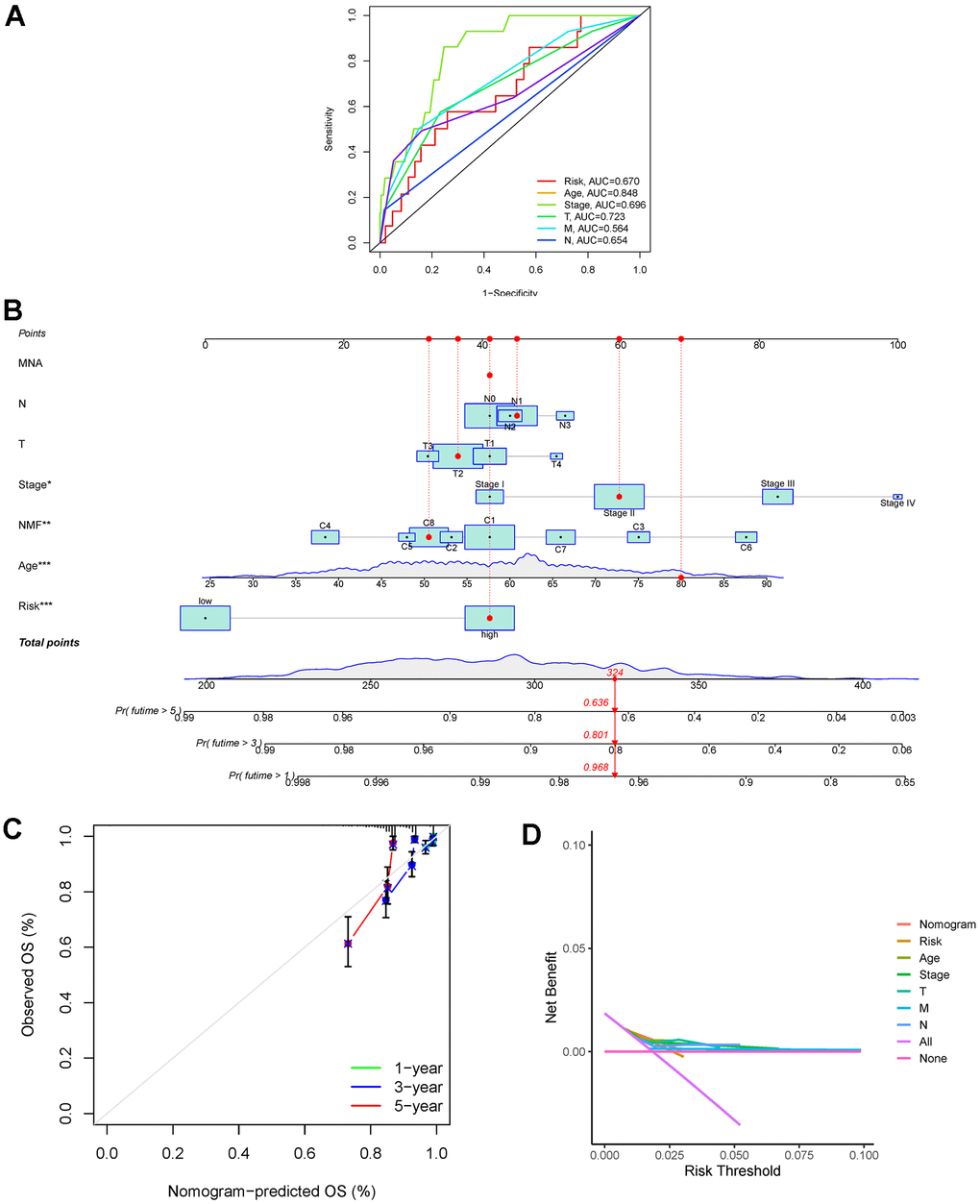 Potential signaling pathways in the low- and high-risk groups 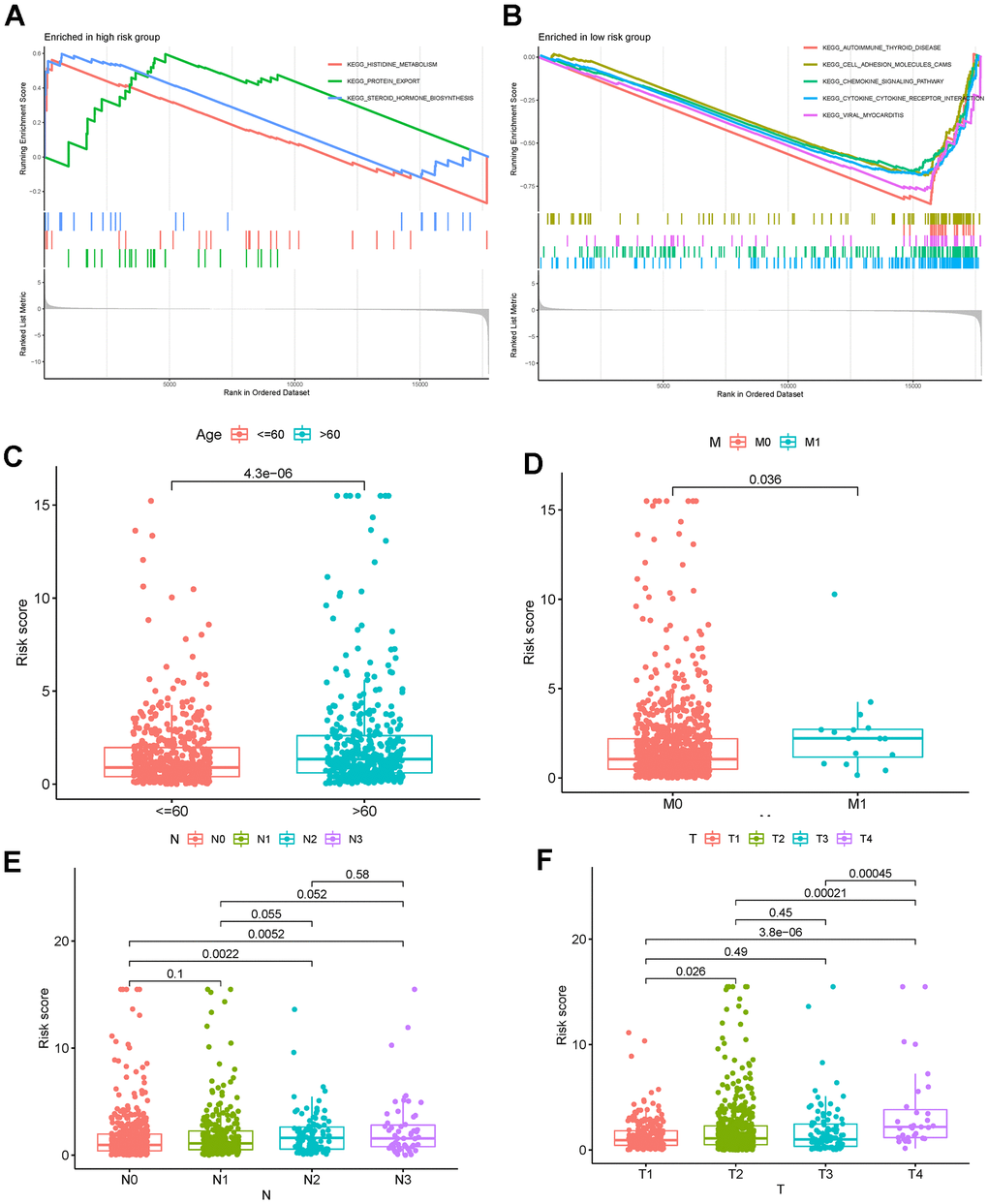 Factors correlated with the risk score 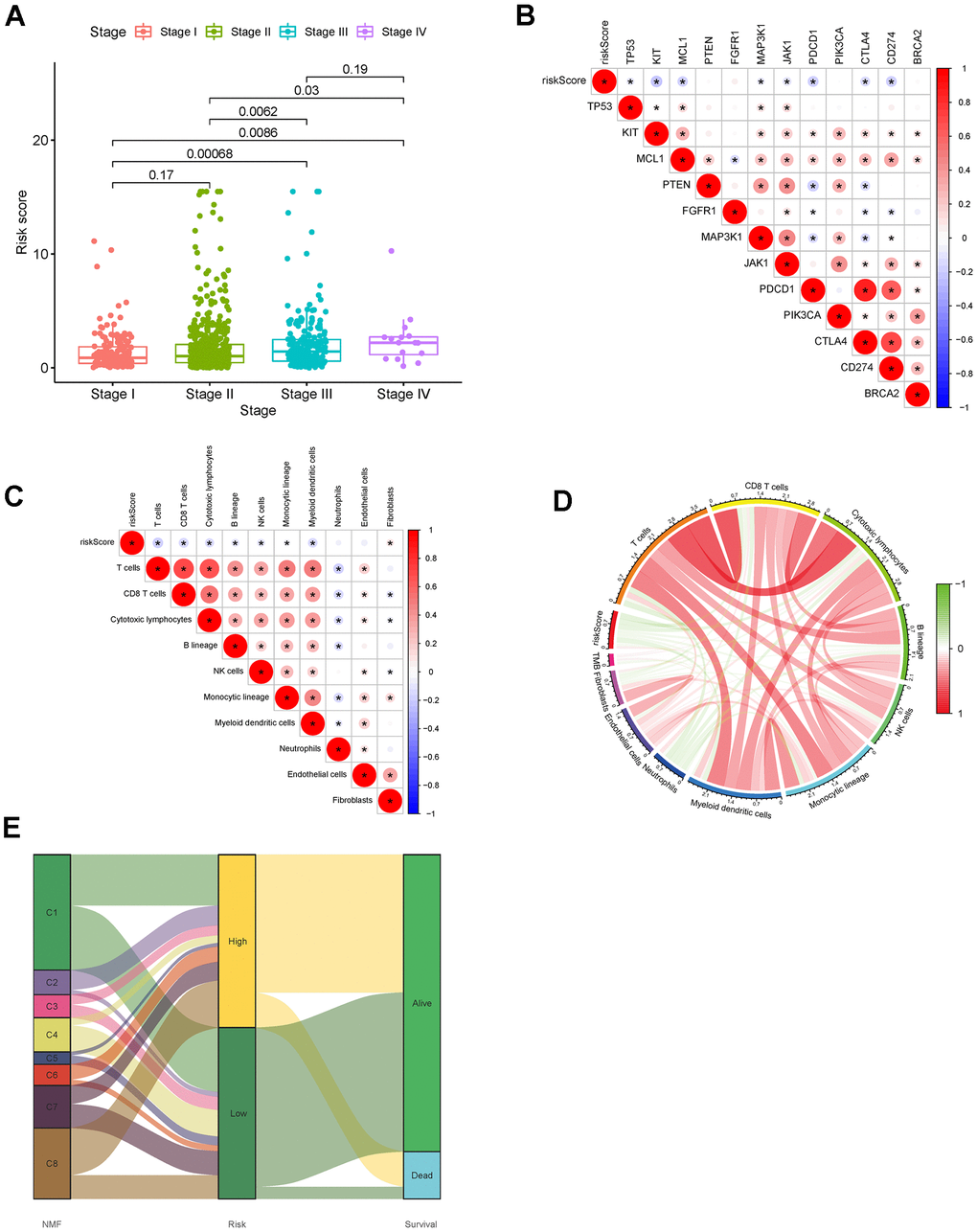 Correlation between NMF clustering and the risk score

To connect the NMF clustering and risk score, we generated a Sankey diagram (Figure 10E). The plot showed that more dead patients had high-risk scores, which further demonstrated the reliability of the risk score. Furthermore, the C2 and C6 subtypes mainly contained high-risk scores breast cancer and had the worse prognoses according to the survival curves, while the C4 and C5 subtypes included more low-risk breast cancer had better prognoses. These results demonstrated the accuracy of both the novel typing mode and the predictive factor.

Validation of the risk score-relevant genes in breast cancer tissue 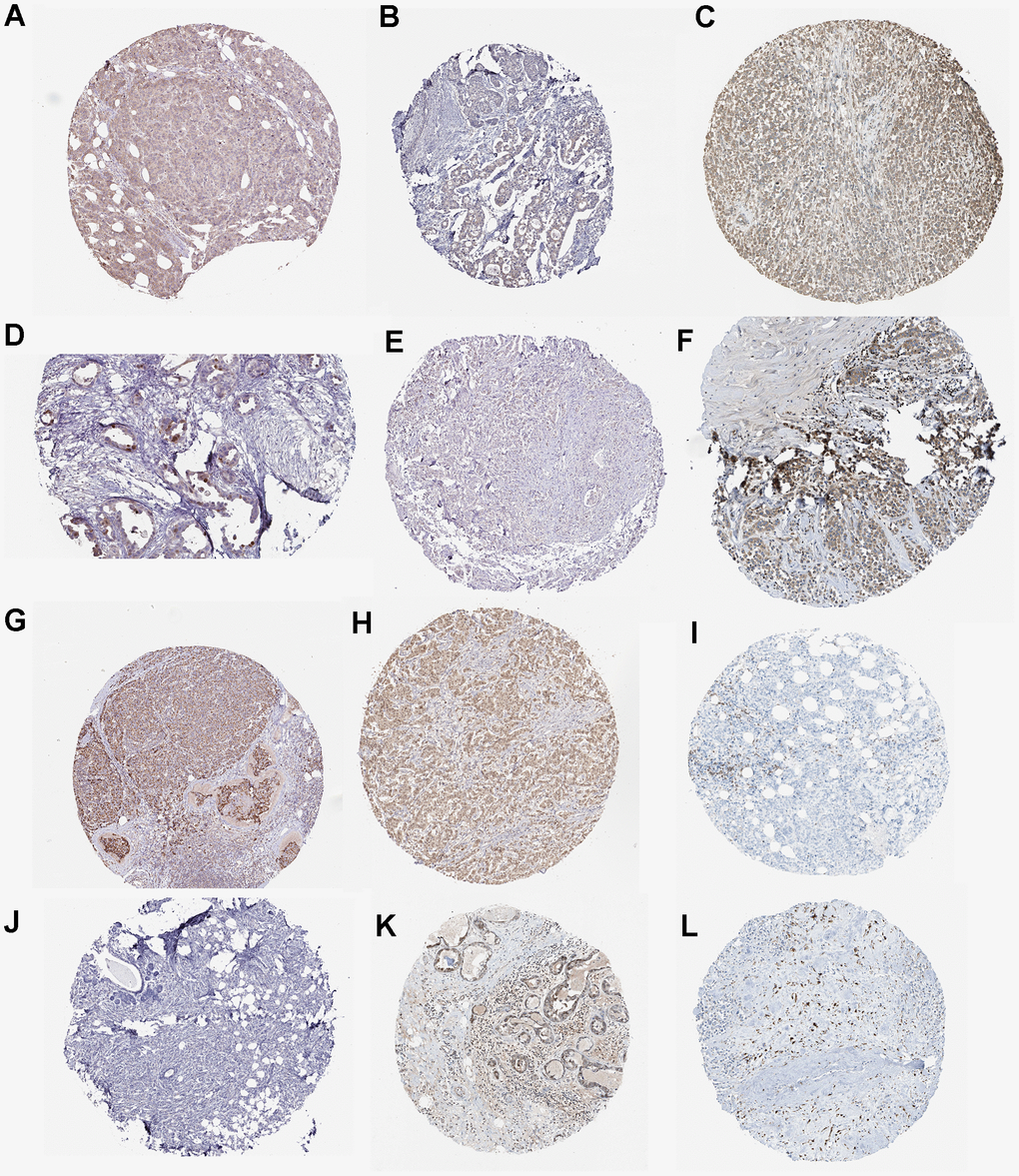 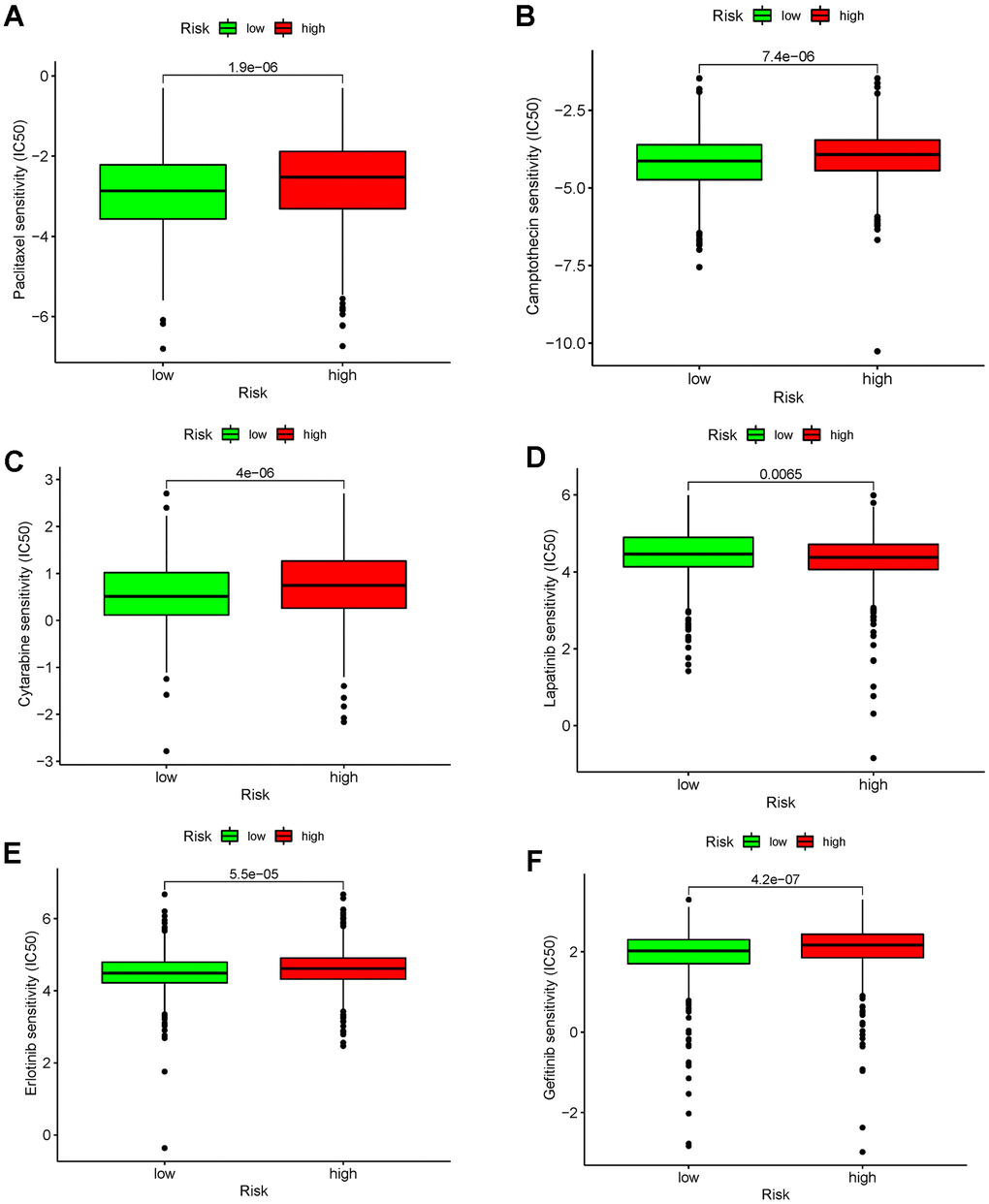 To construct a stable predictive model, we then conducted LASSO Cox regression analysis with DEGs to divide the breast cancer cases into low- and high-risk subsets. Finally, 17 DEGs were included in the risk score calculation. Next, we reviewed previous studies of these 17 DEGs (Table 2). Although the functions of some of these 17 DEGs were unclear and even controversial, and not all of them were reported to be related to breast cancer, we plan to perform additional research on these DEGs. To explore the potential signaling pathways among these 17 DEGs in the low- and high-risk groups, we performed the GSEA, from which we found that high-risk breast cancer was associated with histidine metabolism, protein export, and steroid hormone biosynthesis. Matboli et al. [47] demonstrated that histidine-rich glycoprotein expression was higher in basal-like breast cancer than in the normal-like subtype, while other evidence demonstrated that the basal-like breast cancer subtype had a worse prognosis [48]. Furthermore, Saha et al. [49] reported that steroid hormone receptors can drive cell cycle regulation and breast cancer progression, thereby controlling tumor proliferation. These enriched pathways suggested that the disease included in the high-risk group was more invasive and was associated with poorer survival than that in the low-risk group.

Based on these analyses, we believe that the risk score is valuable, but nevertheless, as a clinical predictive model, it should be better. Therefore, to further refine our model, we considered the risk score, clinical characteristics, and NMF clustering and constructed a nomogram. By summing the scores of these terms, we can predict the 1-, 3-, 5-year survival for every breast cancer patient, which might be a more precise and stable method. However, our analysis still has some limitations. First, our analysis only uses data from online databases, more real-word data are needed to further confirm our findings. Second, the detection of 17 DEGs would cost more than a model with fewer genes. However, our final prediction model has been confirmed to be effective, and since there are several other clinical prediction tools that require detection of more than 17 genes, our model is acceptable. Since breast cancer has varied subtypes, more detailed prediction models for the different subtypes should be constructed. We believe that these prediction models will be more powerful and cost-effective. Finally, although the HR of a single risk score was not very high, significant differences in OS and PFS as well as in AUC values were observed between the low- and high-risk score groups. To further improve the power of prediction model, we constructed a model using NMF clustering, the risk score, and clinical characteristics. Fortunately, our final nomogram model is shown to be better than any single factor.

In this study, we developed a novel predictive model using NMF clustering, clinical characteristics of breast cancer, and risk score based on 17 DEGs. The model was verified by randomly dividing the TCGA cohort into training and test cohorts, and separately analyzing the survival differences between low- and high-risk groups in these cohorts. Differences were observed in immune cell infiltration, clinical correlation, potential signaling pathways, and drug sensitivity.

We acknowledge all online databases for providing their public resources and the patients who participated in these projects.