Copyright: © 2022 Sun et al. This is an open access article distributed under the terms of the Creative Commons Attribution License (CC BY 3.0), which permits unrestricted use, distribution, and reproduction in any medium, provided the original author and source are credited.

Circular RNA (circRNA) plays a vital role in the occurrence and development of nasopharyngeal carcinoma (NPC). However, the role of certain specific circRNAs in NPC are still unknown. In this study, collect tumor samples and adjacent normal tissues from clinical NPC patients and detect the expression of circSOX9 by qRT-PCR. Use nucleoplasmic separation analysis, RNase R digestion assay and FISH to detect the characteristics of circSOX9. After knocking down circSOX9, clone formation experiment and transwell assay were used to detect the proliferation and invasion ability of nasopharyngeal carcinoma cells HONE1 and CNE2, and western blot was used to further detect the level of epithelial-mesenchymal transition (EMT). Use the database to screen for possible downstream target genes and verify them with dual-luciferase experiments. Bioinformatics analysis showed that circSOX9 was significantly up-regulated in NPC, and its expression level was positively correlated with the malignant progression of cancer. Data from function gain or loss studies showed that decrease of circSOX9 inhibited the invasion and proliferation of HONE1 and CNE2 cell lines. Further analysis proved that miR-485-3p was the downstream target of circSOX9. The luciferase test showed that by acting as a molecular sponge of miR-485-3p, circSOX9 promotes the proliferation and invasion of NPC cells, while miR-485-3p can target the expression of SOX9. In conclusion, circSOX9 acts as an oncogene in the progression of NPC through miR-485-3p/SOX9, indicating that circSOX9 can be used as a potential therapeutic target and predictive marker for nasopharyngeal carcinoma.

Nasopharyngeal carcinoma (NPC) is a highly prevalent malignant tumor in China [1]. Nasopharyngeal carcinoma has the pathological characteristics of rapid deterioration and poor prognosis, which often causes most patients to have developed to the middle and advanced stages at the time of diagnosis [2, 3]. Until recently, the underlying pathways and underlying mechanisms of NPC were unclear. The ability to characterize the cancer genome now provides insight into the origin and molecular basis of this disease.

CircRNA is a type of non-coding RNA that has been identified as an important gene expression regulator and is involved in cancer progression [4]. CircRNA mainly regulates cell state in three ways: encoding small peptides, ceRNA or directly binding to RBP protein [5, 6]. During the occurrence and development of tumors, many circRNAs participate in a series of biological processes related to invasion, metastasis, and proliferation [7, 8]. However, the role of circRNA in NPC is rarely reported.

Here, we examined the differentially expressed circRNA that was significantly up-regulated in NPC tissues and found that knockdown of circSOX9 significantly reduced its malignancy. Bioinformatics analysis showed that circSOX9 was significantly up-regulated in NPC, and its expression level was positively correlated with the malignant progression of cancer. Data from function gain or loss studies showed that decrease of circSOX9 inhibited the invasion and proliferation of HONE1 and CNE2 cell lines. Further analysis proved that miR-485-3p was the downstream target of circSOX9. The luciferase test showed that by acting as a molecular sponge of miR-485-3p, circSOX9 promotes the proliferation and invasion of NPC cells, while miR-485-3p can target the expression of SOX9. We studied the possible targeting of miRNA and noticed that circSOX9 targets miR-485-3p/SOX9 like ceRNA and thus enhances the progression of nasopharyngeal carcinoma.

CircSOX9 is increased in NPC cells and tissues 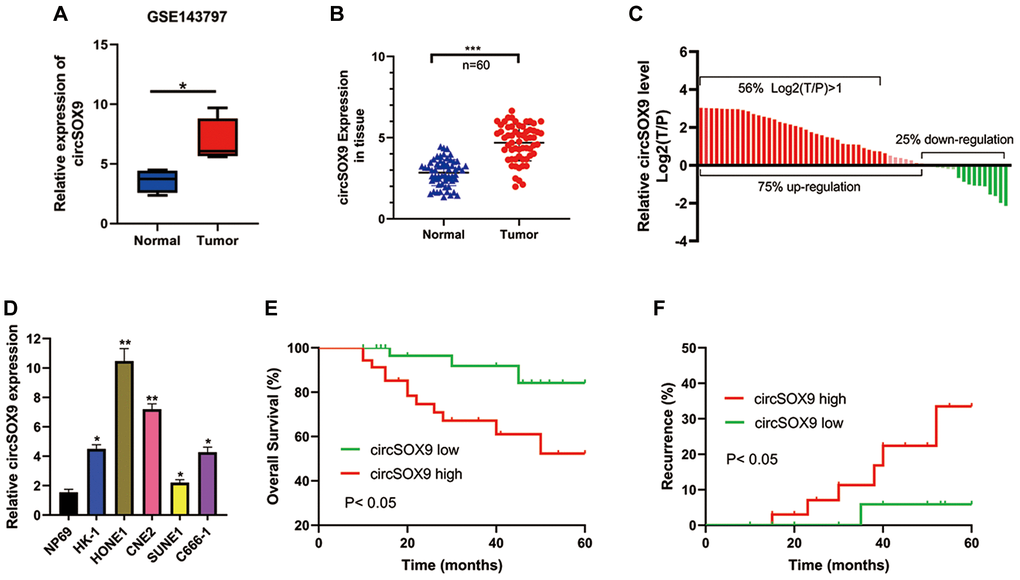 Table 1. The correlation of clinical features and circSOX9 expression in NPC patients.

The characteristics of the circSOX9

Before delving into the function of circSOX9 in NPC, it is necessary to investigate the characteristics of circSOX9. In the HONE1 cell line, circSOX9 is resistant to RNase R, while mSOX9 is significantly inhibited after RNase R treatment (Figure 2A, 2B). The analysis of cytoplasm and nuclear separation showed that most of circSOX9 were distributed in the cytoplasm (Figure 2C). We further repeated the above experiment in CNE2 (Figure 2D–2F). Figure 2G shows that circSOX9 was amplified by divergent primers, only from cDNA and not from gDNA. 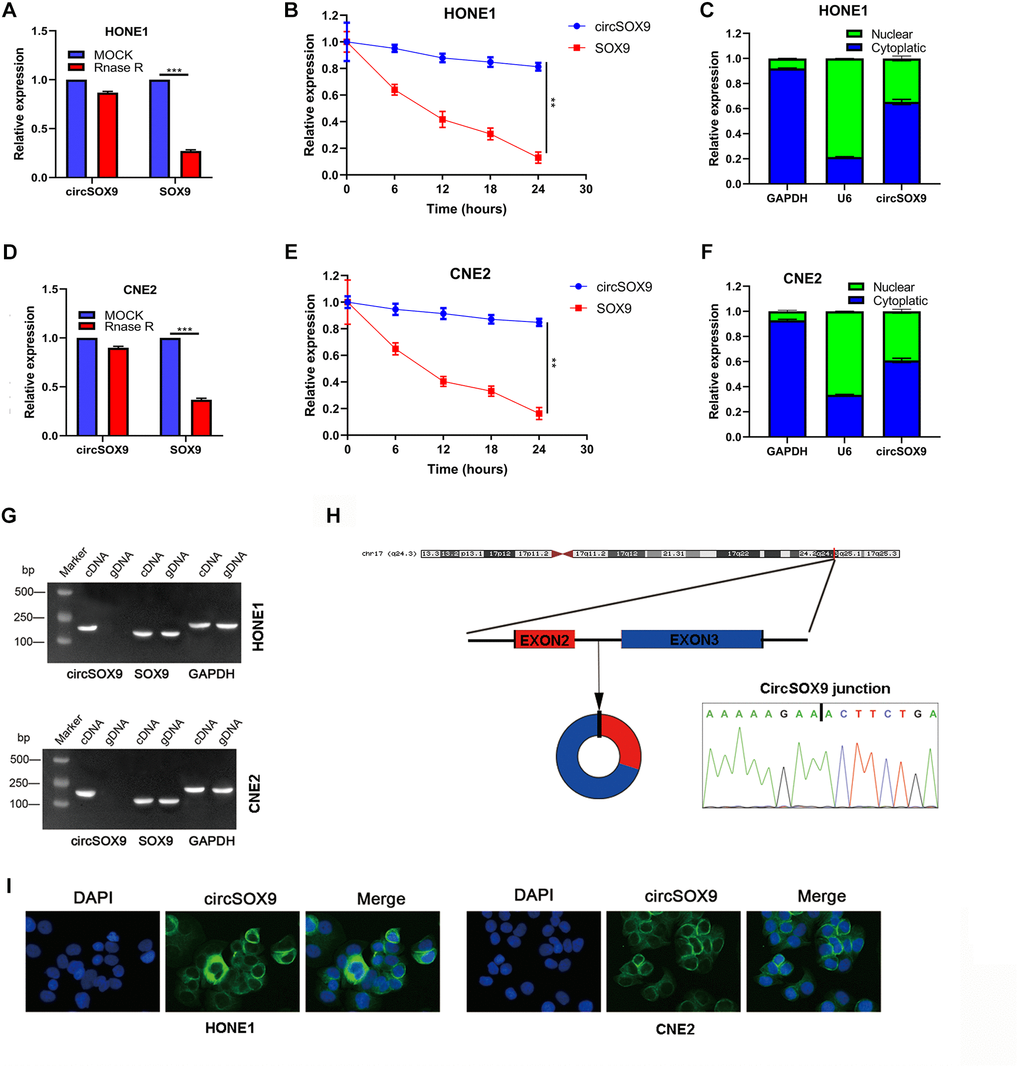 CircSOX9 promotes the proliferation and migration of HONE1 and CNE2 cells 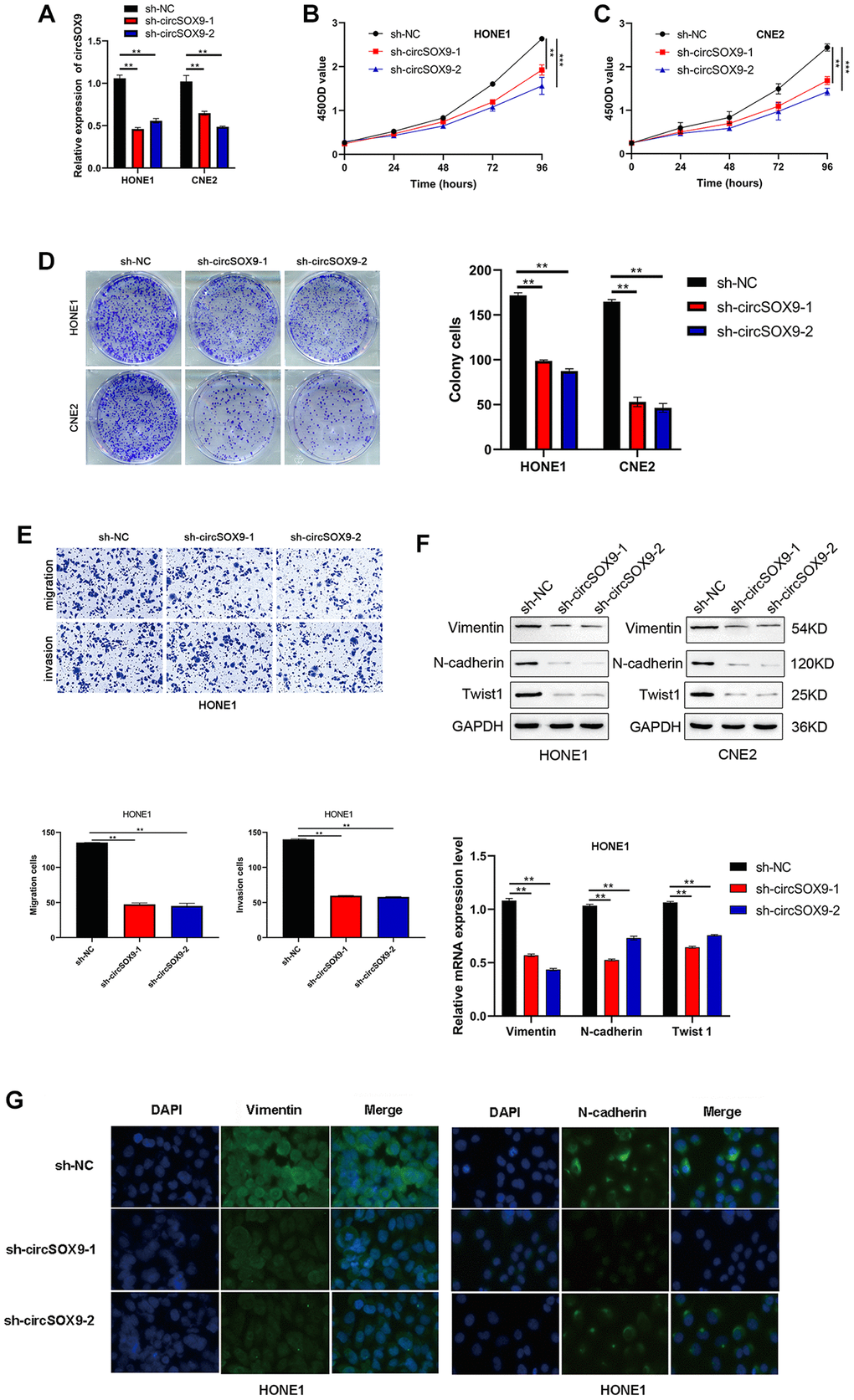 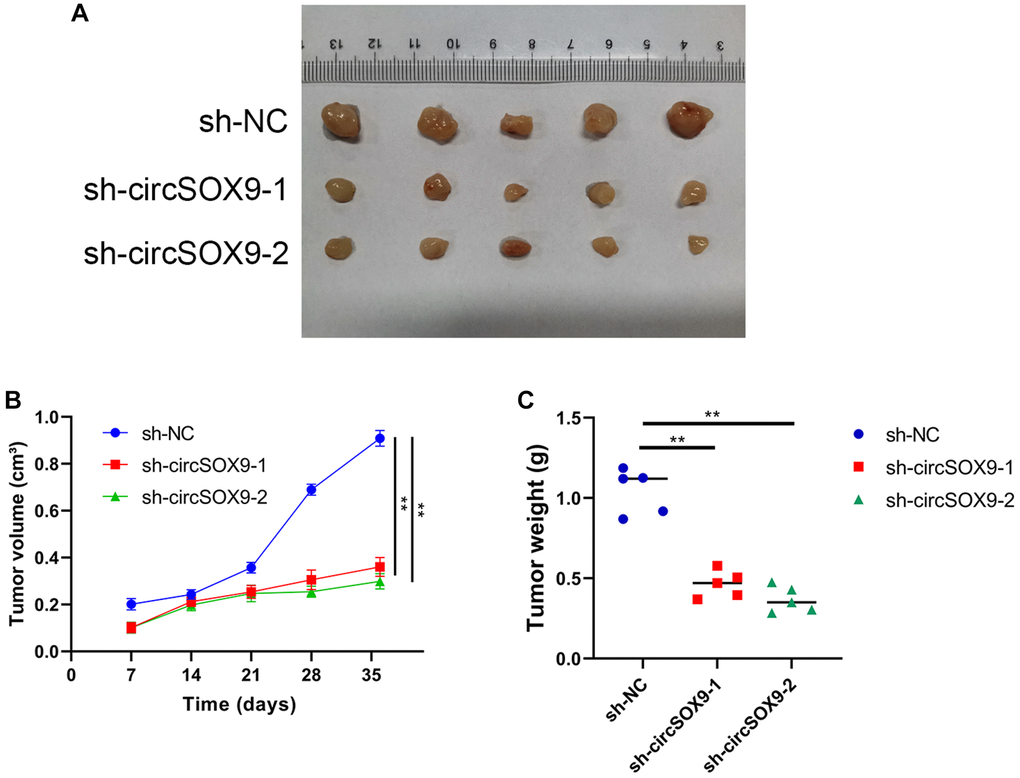 Screening the potential target genes of circSOX9 in NPC cells

Predictive software (CircInteractome, Starbase) was used to screen out potential circSOX9 target genes. Six miRNAs were selected as putative target genes for follow-up studies (Figure 5A). Among the 6 miRNAs, we found that miR-485-3p, miR-577, and miR-582-3p were significantly downregulated in NPC tumor tissues (Figure 5B). The data from the luciferase assay suggested that the miR-485-3p could inhibit the luciferase activity of circSOX9 3′UTR (Figure 5C). Subsequently, qRT-PCR was used to detect the expression of miR-485-3p and circSOX9 in NPC tissues, then Person analysis of the expression levels indicated that circSOX9 and miR-485-3p were negatively correlated in NPC tissues (Figure 5D). Bioinformatic analysis indicated that miR-485-3p was downregulated and positive correlation with NPC prognosis based on GEO database (Supplementary Figure 1). Data from luciferase assay showed that miR-485-3p could combine with circSOX9 both in HONE1 and CNE2 cells (Figure 5E, 5F). The RIP test shows that Ago2 can bind to circSOX9 and miR-485-3p, indicating that these two can act on Ago2 (Figure 5G). Together, these results indicate that circSOX9 perhaps sponge miR-485-3p both in HONE1 and CNE2 cells. 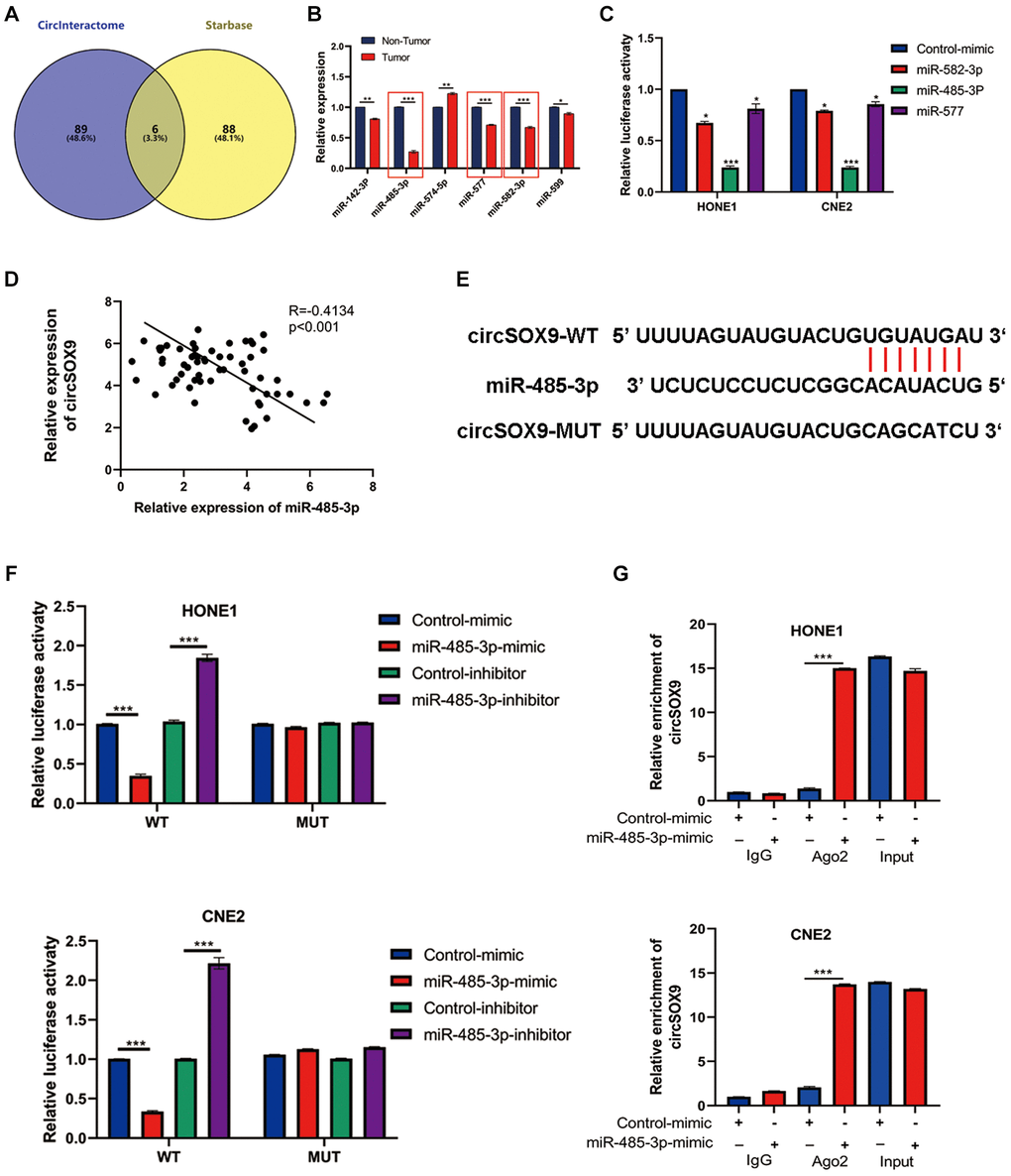 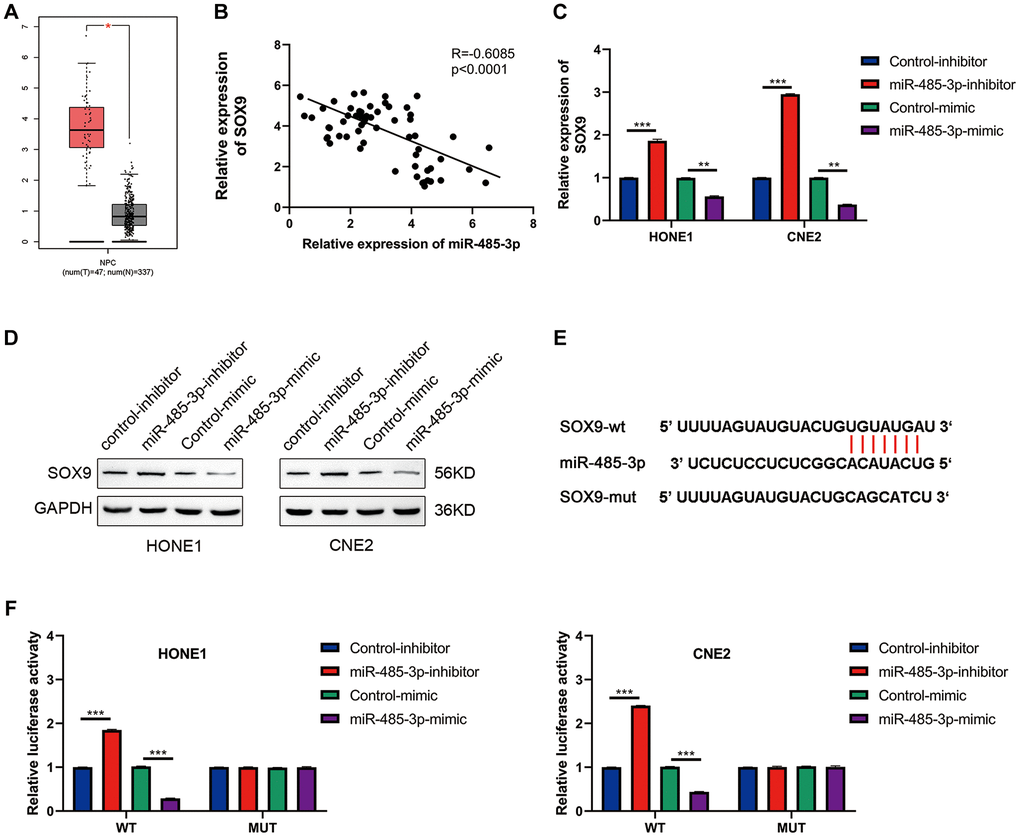 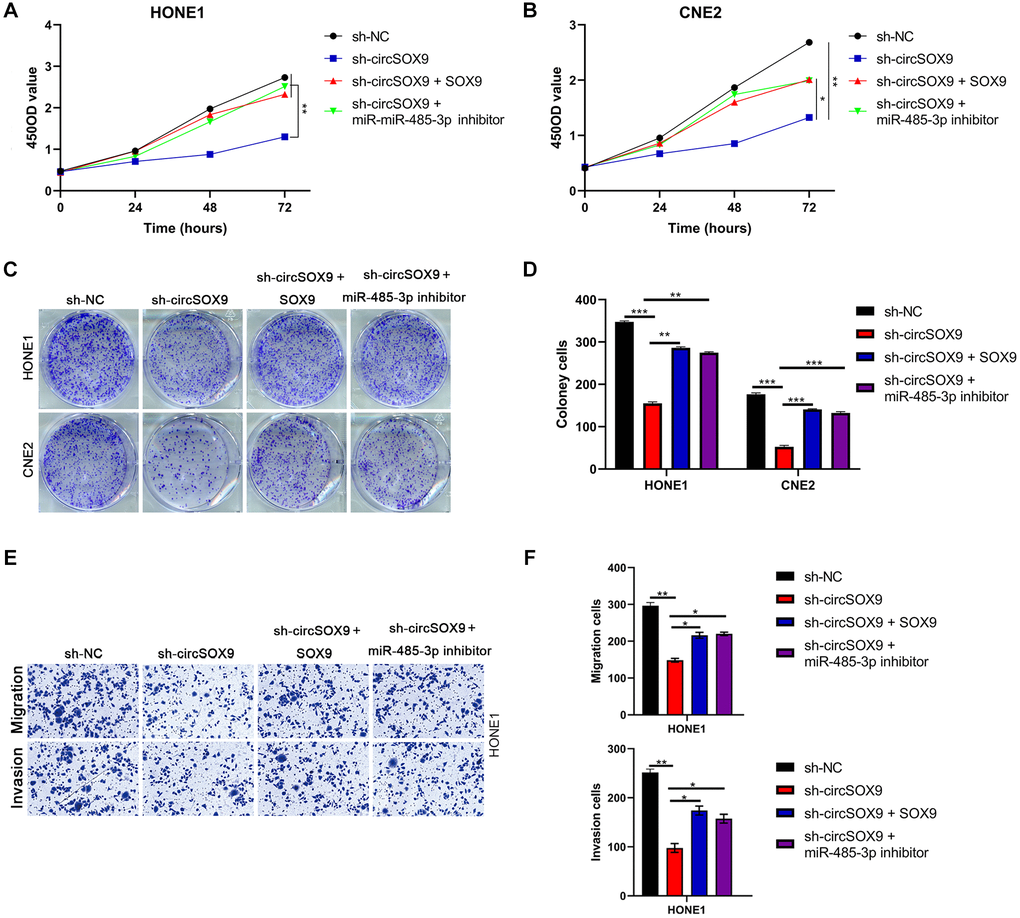 According to reports, many genes produce individual circRNAs in different cells, but their biological functions are unclear. With the development of high-throughput RNA sequencing and bioinformatics analysis, the distribution map of human circRNAs in different cells and tissues has been published. Studies have shown that abnormally expressed circRNAs is related to clinical characteristics and may become a biomarker of tumor occurrence and development. In this study, we found that the circular RNA from the SOX9 exon (named circSOX9) was significantly up-regulated in NPC tissues and the high expression of NPC was positively correlated with the progress of NPC.

Our study proved the relationship between miR-485-3p and circSOX9. Both circRNA and miRNA are important components of non-coding RNA [9, 10]. In tumor research, circRNAs use their own binding sites as sponges to adsorb miRNAs, and regulate miRNAs through competitive endogenous RNAs (ceRNAs), thereby regulating the expression of downstream target genes [11, 12]. Our research shows that miR-485-3p targeted by circSOX9 is closely related to the proliferation and invasion ability of NPC cells HONE1 and CNE2. It has been reported that miR-485-3p is located in the 14q32.31 chromosome region [13]. A large number of studies have frequently observed cancer mutations in this region, which suggests that miR-485-3p may have tumor suppressor potential [14, 15]. Our research shows that the expression of miR-485-3p in NPC is down-regulated, and it exerts a tumor suppressor effect by targeting SOX9.

SOX9 is an important transcription factor that regulates the DNA binding and transactivation domains of the high-mobility group box [16]. However, the work of SOX9 in NPC has not been reported. Studies have pointed out that SOX9 regulates some of its target genes through the abundant transcription enhancer clusters in histone H3 acetylated by lysine 27 (H3K27ac) [17, 18]. SOX9 participates in the progression of many cancers through this model. SOX9 has previously been shown to be highly expressed in aggressive cancers and has also been identified as a negative prognostic factor for lung cancer [19–21]. However, the biological function of SOX9 in NPC remains unclear. Here we identified the miR-485-3p/SOX9 axis as a signaling pathway that promotes tumor progression in response to circSOX9. The data shows that SOX9 can promote the progress of NPC, and its expression is regulated by miR-485-3p.

We collected tumor tissues and adjacent non-tumor (para-tumor) tissues of patients (n = 60) who underwent nasopharynx tumor biopsy and pathological diagnosis confirmed that it was nasopharyngeal carcinoma from March 2016 to March 2019. patient information is shown in Table 1. The study was approved by the ethics committee and all patients provided written informed consent.

HONE1 or CNE2 cells in each group were washed 3 times with cold PBS, and then lysed for 30 minutes. The protein concentration was then measured using the BSA kit. The measured protein was then loaded and separated by electrophoresis in a 10% SDS-PAGE gel and transferred to the PVDF membrane. Incubate the PVDF membrane with the corresponding primary antibody overnight, wash the membrane three times with TBST, incubate the membrane with the corresponding secondary antibody at room temperature for 1 h, wash the membrane three times with TBST, and detect by chemiluminescence.

The plasmid psiCHECK contains the cloned circSOX9 WT and its mutant sequence. HONE1 or CNE2 cells (4 × 104 cells/well) were cultured overnight in a 6-well plate and transfected with psiCHECKCirc-SOX9 mutant, psiCHECK-circSOX9 WT and psiCHECK vector for Renilla luciferase expression. Cells were lysed and the luciferase activity was studied by the dual-luciferase gene detection system after 24 h.

Use 8 μm-well Transwell inserts to determine the invasiveness of the cells. Inoculate 100 μL of cells (2 × 105) in serum-free medium into the upper chamber and 400 μL of medium containing 10% FBS in the lower chamber. After culturing in an incubator for 24 hours, the cells were fixed with methanol, stained with 0.1% crystal violet, and photographed and counted under an inverted microscope.

Data supporting the findings of this study are available from the corresponding author upon request.

This study was supported by “cochlear hearing mechanism of calcium pump Cav1.3(L-Type α1D) and PMCA2 and its role in the pathogenesis of senile deafness”, NO. 81771004.