Copyright: © 2022 Luo et al. This is an open access article distributed under the terms of the Creative Commons Attribution License (CC BY 3.0), which permits unrestricted use, distribution, and reproduction in any medium, provided the original author and source are credited.

As the leading cause of cancer-related death worldwide, non-small-cell lung cancer (NSCLC) is still in need of improved therapeutic strategies. CircKIF4A has been found to be involved in the progression of multiple cancers while its role in NSCLC remains unclear. To investigate the functions of circKIF4A, we assessed the expression of circKIF4A in NSCLC cells and tissues and performed experiments to determine the detailed functions of circKIF4A in NSCLC, including migration and proliferation. We found CircKIF4A expressed more heavily in the cells and tissues of NSCLC patients, and functional studies showed that inhibition of circKIF4A reduced NSCLC cells metastasis and proliferation. Furthermore, we seek to identify the underlying regulatory effect of circKIF4A in NSCLC. Studies revealed that circKIF4A sponged miR-1238 to promote NSCLC progression by up-regulating claudin14 (CLDN14) expression. In conclusion, circKIF4A is a potential diagnostic and therapeutic target in the circKIF4A/miR-1238/CLDN14 axis that plays an important role in NSCLC progression.

Lung cancer is still major burden of death around the world, mainly because of high metastasis rate [1]. Among of all lung cancers, non-small-cell lung cancer (NSCLC) occupies nearly 85%. Despite improvements in overall survival of patients by a variety of treatment strategies especially targeted therapy and immunotherapy, NSCLC still has a bleak prognosis. In order to develop novel and useful therapeutic tools to better control this disease, a further understanding of the mechanisms of NSCLC progression is urgently needed.

Deregulation of non-coding RNAs (ncRNAs) has been reported involved in lung cancer progressions [2, 3]. CircRNAs play key roles in lung cancer tumorigenesis, progress, invasion and metastasis and might be promising diagnosis and therapeutic targets [4, 5].

Previous studies have found that circKIF4A (hsa_circ_0007255) is vital in multiple cancer progressions. In ovarian cancer, circKIF4A was highly expressed and enhanced cell proliferation and migration [6]. In glioma, circKIF4A promoted tumor development through the miR-139-3p/Wnt5a axis [7]. Besides, circKIF4A regulated KIF4A expression to affect TNBC progression via sponging miR-375 [8]. However, it remains unclear how circKIF4A impacts upon NSCLC.

circKIF4A is upregulated in NSCLC

We performed qRT-PCR in NSCLC cell lines. Figure 1A showed that it over-expressed compared with normal cell line. Next, we collected 42 pairs of NSCLC tissues and normal tissues. The results further confirmed our conclusion (Figure 1B).

Figure 1. circKIF4A is upregulated in NSCLC. (A) The circKIF4A expression in NSCLC cell lines. (B) The expression of circKIF4A in 42 pairs of NSCLC tissues and adjacent normal tissues. **P < 0.01.

circKIF4A performs as a sponge for miR-1238

circRNAs could regulate gene expression by acting as microRNA decoys. Here, we explored the sub-location of circKIF4A in NSCLC cells. Figure 3A revealed circKIF4A was mostly located in cell cytoplasm. Next, Circular RNA Interactome was devoted. Figure 3B showed the predicted interaction and binding sites for miR-1238 in circKIF4A sequence. Therefore, luciferase reporter assay was conducted and the result showed that the co-transfected cells with wild type luciferase reporter and miR-1238 mimics led to the reduction of luciferase intensity (Figure 3C). We also performed RIP assay and found that MS2bs-circKIF4A group was enriched in miR-1238, suggesting that circKIF4A could directly bind with miR-1238 to sponge miR-1238 (Figure 3D).

circKIF4A functions as a ceRNA to regulate CLDN14 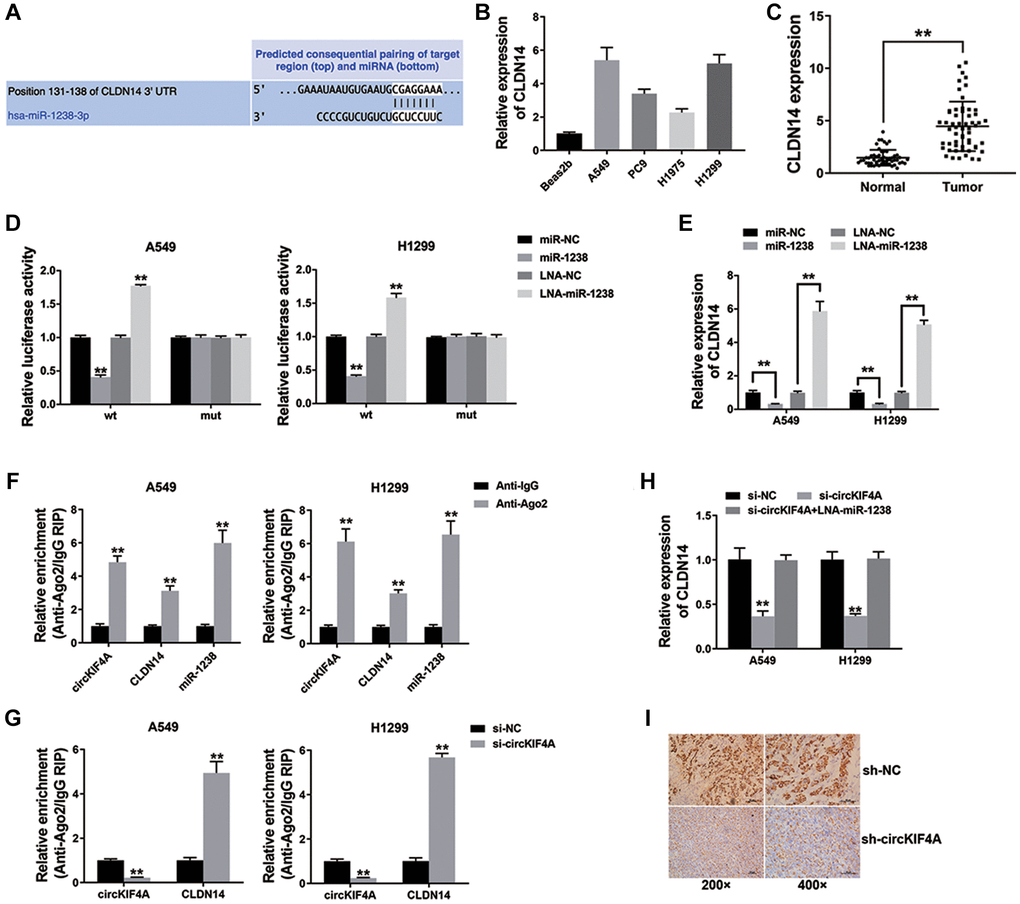 NSCLC remains major burden worldwide [9]. Despite various treatments have occurred, the mortality rate remains high [10]. There are still many problems to be solved urgently. Exploring the underlying mechanisms of NSCLC proliferation and metastasis could help develop individual therapeutic strategies.

Non-coding RNAs are associated with lung cancer progressions and could serve as predictive biomarkers [11]. CircRNAs are vital in NSCLC generation and progression [12, 13]. For instance, circRNA_102481 contributed to EGFR-TKIs resistance via the miR-30a-5p/ROR1 axis, which could be an underlying target in NSCLC [14].

CircKIF4A is a promotor in multiple cancers. CircKIF4A facilitated tumor malignant progress via the miR-1231/GPX4 axis in papillary thyroid cancer [15]. CircKIF4A sponged miR-375/1231 accelerates tumor progression via up-regulating NOTCH2 expression in bladder cancer [16]. Besides, circKIF4A promoted metastasis and reduced cell apoptosis by miR-152/ ZEB1 axis in breast cancer [17]. However, it has not been reported that how circKIF4A functions in NSCLC.

miR-1238 is reported as a suppressor in multiple cancers [18–20]. CircRNAs has the ability to sponge miR-1238 to enhance tumor progressions. circ0070934 promotes cell metastasis by sponging miR-1238/1247-5p in cutaneous squamous cell carcinoma, [21]. In osteosarcoma, circular RNA circ_0000502 accelerates cell proliferation and invasion via sponging miR-1238 [22]. In NSCLC, miR-1238 also suppressed tumor cells by targeting LHX2 [23]. Besides, the results also indicated that miR-1238 was lower expressed in NSCLC cell lines, and miR-1238 suppressed NSCLC cell proliferation and metastasis (Figure 4). Besides, circKIF4A could combine miR-1238 and serve as a sponge for miR-1238 (Figure 3).

It has been confirmed that Claudins (CLDNs) were up-regulated in multiple cancers [24]. Among them, CLDN14 could promote tumor proliferation, and invasion through the PI3K/AKT/mTOR pathway [25]. CLDN14 was also found up-regulated in gastric cancer tissues and was related to E-cadherin expression and lymph node metastasis [26]. However, the functions of CLDN14 in NSCLC are still unclear. Here, we assessed CLDN14 expression and found it up-regulated in NSCLC. Acting as a downstream target, CLDN14 could be regulated by miR-1238. Further experiments showed that circKIF4A served as a ceRNA for miR-1238 to enhance CLDN14 expression of NSCLC (Figure 5).

In conclusion, we showed that the circKIF4A/miR-1238/CLDN14 axis was involved in NSCLC proliferation and metastasis. Targeting circKIF4A is promising for NSCLC treatment.

Cell lines included Beas2b (normal lung cell line), A549, PC9, H1975 and H1299 (NSCLC cell lines). All of them were purchased from ATCC. DNA fingerprinting was performed to ensure cell authenticity. We also performed the detection for mycoplasma infection routinely.

The transfection was done with Lipofectamine 3000 (Invitrogen, USA). miR-1238 mimics and inhibitors, circKIF4A siRNAs, and circKIF4A shRNAs were purchased from GeneCopoeia (USA). Corresponding siRNA sequences of si-NC, si-circKIF4A#1, #2, and #3 were UUCUCCGAACGUGUCACGUTT, GCCUGGAUCUAUAACGUAUTT, GAUCUAUAACGUAUUAAUATT, and UAACGUAUUAAUAUUAACCTT, respectively.

We resuspended cells (1 × 103) were and titrated into 96-well plates after transfection. Cells were incubated for 48 h at a temperature of 37°C before adding 10 μl CCK-8 solution (Dojindo Laboratories, Japan). We measured the absorbance at 450 nM after incubation for 2 h at 37°C, with microtiter plate reader (Bio-Tek EPOCH2, USA).

We totally resuspended 1 × 103 cells and seeded in 6-well plates. By 14-days incubation at 37°C, methanol fixed with colonies and stained with 0.1% crystal violet. We used ImageJ software to enumerate the colony number.

We resuspended a total of 1 × 104 cells and seeded in the upper migration chambers (BD Biosciences, USA). Simultaneously, we added 10% FBS which was a chemoattractant to the lower chamber. The upper chambers were collected and the cells were further fixed with methanol after one day. Then, 0.1% crystal violet were applied for staining. The cells under the upper chamber were imaged and calculated by ImageJ software.

We got approval of animal experiments and the experiments were performed following the guidelines of Institutional Animal Care and Use Committee of the First Affiliated Hospital, Xi’an Jiaotong University. We subcutaneously injected a total of 2 × 106 A549 cells into 5 male nude mice (4-week-old). We excised the xenograft tumors with the condition of anesthesia to measure the weights of tumors.

The cells were seeded in 96-well plate with the amount of 3 × 104 cells per well. Mutation was made in the predicted miR-1238 binding sites of circKIF4A and 3′-UTR of CLDN14. The miRNA mimics, inhibitors and constructed reporting vectors (circKIF4A-wt/mut or CLDN14 3′-UTR-wt/mut) were co-transfected into cells for 48 h. The relative luciferase signal was further detected using dual-luciferase reporter assay (Promega, USA).

We performed RIP assays for AGO2 with Millipore. Relative abundance of circKIF4A, CLDN14 and miR-1238 was measured later.

The tissues on the slides were incubated in 3% H2O2 solution for 15 minutes after deparaffinization and rehydration at room temperature. The antigen retrieval was further performed using citrate buffer in a cooker at 96°C for 4 min. After blocking by goat serum, antibody against CLDN14 (dilution 1:200, Affinity, USA) were used for incubation overnight at 4°C. The slides were incubated at room temperature for 10 minutes with biotinylated secondary antibody, and finally HRP-Streptavidin. The slides were imaged after DAB staining.

We conducted statistical analysis with SPSS 25.0. T tests were applied to make comparisons between groups. We set P < 0.05 as a significant value. Unless specific description, we presented data as the mean ± 3 S.D.

In this study, all the procedures involving human participants were conducted according to the ethical standards of the medical Ethics Committee of the First Affiliated Hospital, Xi’an Jiaotong University and the 1964 Helsinki declaration and its later amendments or comparable ethical standards. All participants provided informed consents.

All procedures involving animals in this study were performed according to the ethical standards of the institutional standard guidelines of the First Affiliated Hospital, Xi’an Jiaotong University where the studies were conducted.