Patients of advanced age are at a high risk of developing acute kidney injury (AKI). Compared to younger patients with AKI, older ones have more severe renal pathology, develop more complications, and have a significantly high mortality [1–5]. Although blood purification techniques, such as continuous renal replacement therapy (CRRT), are available, studies have not demonstrated their beneficial effects for overall or renal survival among AKI patients [5–9]. Conversely, the use of an artificial biological kidney has been shown to reduce mortality among AKI [10,11]. We propose that, compared to artificial biologicalrenal system, blood purification techniques, including CRRT, neither effectively remove circulating renal injury-associated adverse factors, nor provide beneficial effects for facilitating recovery from AKI. Furthermore, which cytokines effectively removed by artificial biological kidney are still unknown, the mechanisms through which the technique decrease mortality among AKI are unclear. Parabiotic mice are used as an experimental model, which involves the surgical joining of the muscle and hypoderm of two mice, in order to create a shared circulatory system. Blood cells and soluble factors can freely circulate within this shared system continuously at physiological levels. Recently, the parabiotic model has been used to study the effect of a shared circulatory system on organ function and the extent of recovery after injury, based on mice with primary biliary cirrhosis (PBC) gene modifier and wild type mice, this approach successfully ameliorated the murine autoimmune cholangitis [12]. Another parabiosis study connected mice with surgery-induced myocardial infarction and healthy littermates. This study found that blood cells from the healthy animals facilitated the regeneration of injured cardiomyocytes in the diseased mice [13]. Parabiosis has also been shown to alleviate brain and peripheral amyloid-beta potentiation in mice with Alzheimer's disease [14], and to participate in early meniscal healing after injury [15]. The mechanisms through which these effects are exerted involve the achievement of protective immunity between two organs, mediated by soluble factors in the shared circulation [16]. Moreover, the non-injured individual can provide continuous biological renal support to the mice sustaining AKI through parabiosis. On the other hand, the circulating cytokines involved in influencing the prognosis of parabiotic IRI mice are still unclear. Aging kidneys exhibit increased oxidative stress, inflammation, dysregulated autophagy and mitochondrial homeostasis, and a delayed renal recovery after injury [17]. Elderly with AKI are less likely to recover than the young [18]. Our previous experiments involving parabiosis showed that youthful milieu might attenuate inflammation, apoptosis, and increase autophagy in older mice through the amelioration of renal senescence [19]. The aged mice IRI model that was established based on parabiosis found that youthful systemic milieu might decrease the level of oxidative stress, inﬂammation, and apoptosis, while increasing autophagy and improving the renal pathology after IRI in aged animals [20]. On the other hand, it was found that older mice sustaining renal IRI had a poor renal recovery compared to younger ones with IRI, while cytokines, such as GDF11, improved renal tubular proliferation, dedifferentiation, and the prognosis of renal IRI in elderly mice [21]. In this study, we administered IRI to aged mice, and provided them with exogenous biological renal support through parabiosis, followed by monitoring the mortality, renal function and pathologic changes, including tubular proliferation and dedifferentiation at 72 hours after IRI. Our aim was to identify whether exogenous biological renal support promoted renal recovery from IRI and improved prognosis, and to explore the preliminary mechanisms involved.

At 72 hours following the procedure, 21.4% of the old IRI mice survived. Conversely, 100% of the old-old parabiotic or the young-old parabiotic IRI mice survived for this time period. At 72 hours following IRI, the old IRI mice showed extensive loss of tubular brush borders, epithelial necrosis and degeneration of the basement membrane, cast formation, and tubular dilatation, accompanied by an increase in the acute tubular injury score. The expression of Kim1, a marker of renal tubular injury, was also elevated, as was serum Cr and BUN. Compared to the old: IRI group, the old parabiotic IRI mice of the O-O: IRI group and the Y-O: IRI group had significantly lower acute tubular injury scores, significantly lower Kim1 expression, and a significantly smaller increase in serum Cr and BUN. There was no significant difference between the aged IRI mice of the old-old parabiotic group and the aged IRI mice of the young-old parabiotic group, with regard to acute tubular injury scores, serum Cr, BUN, and mortality. These findings suggest that, at 72 hours following IRI, the exogenous biological renal support introduced by parabiosis from either an old-old or a young-old pairing could significantly alleviate renal histological injury and improve serum Cr, BUN, and mortality in old IRI mice (Figure 1). 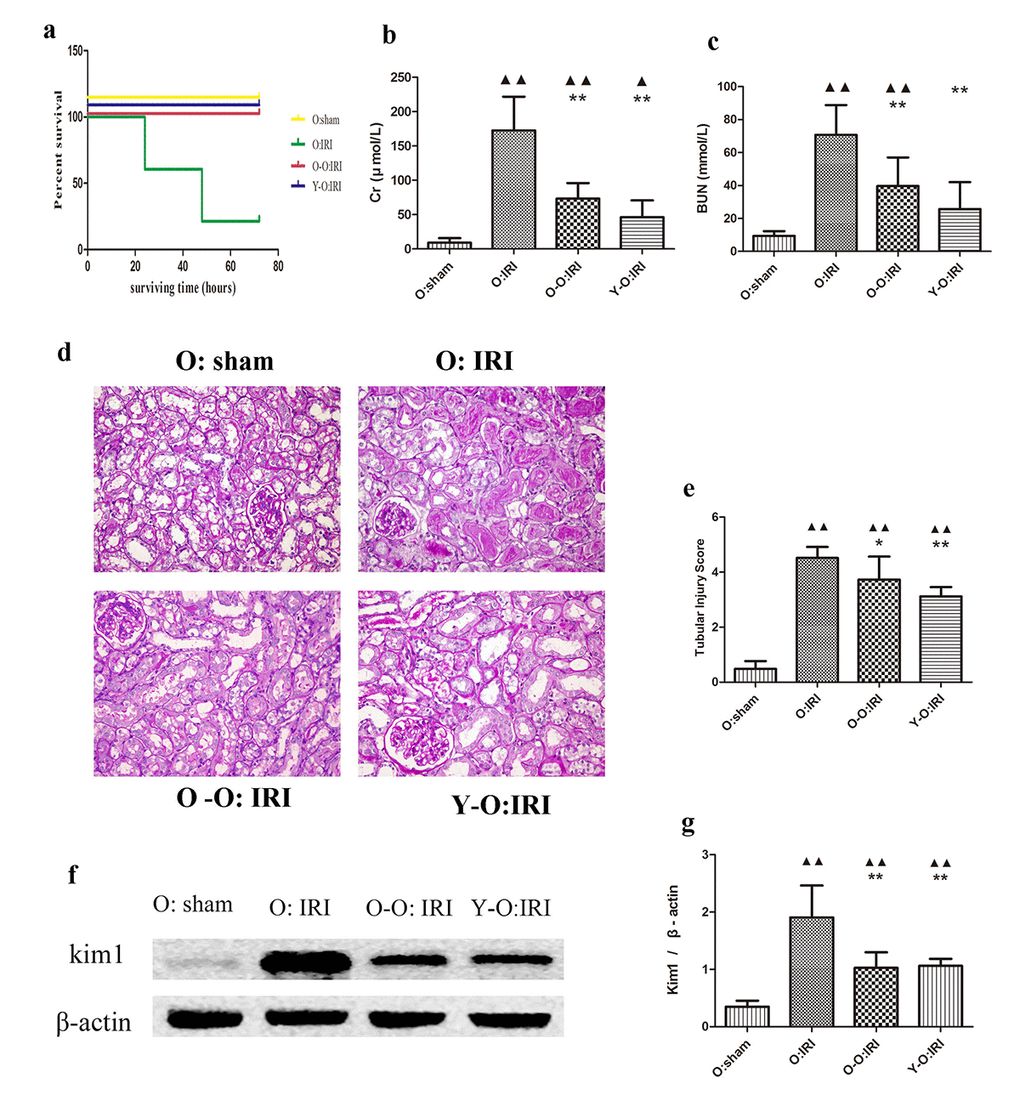 At 72 hours following IRI, the percentage of 5-Ethynyl-2-deoxyuridine (EDU)-positive and proliferating cell nuclear antigen (PCNA)-positive cells was higher in the old: IRI group than in the old: sham group. EDU-positive cells were mostly located outside the tubular brush borders, as marked by lotus tetragonolobus lectin (LTL), while PCNA-positive cells were mostly located within the tubular base membranes, as marked by periodic acid–Schiff (PAS) staining. Furthermore, the expression of cyclin D1 and cyclin E1 was also significantly higher in the old: IRI mice than in the old: sham group. In addition, the percentage of EdU-positive cells and PCNA-positive renal tubular cells in the O-O: IRI and the Y-O: IRI group were significantly higher than in the old: IRI group, accompanied by higher cyclin D1 and cyclin E1 expressions. Conversely, there was no significant difference regarding aged IRI mice between the old-old parabiotic group and the young-old parabiotic group. These findings indicate that the exogenous biological renal support provided by parabiosis can significantly improve tubular cell proliferation in old IRI mice kidney (Figure 2). 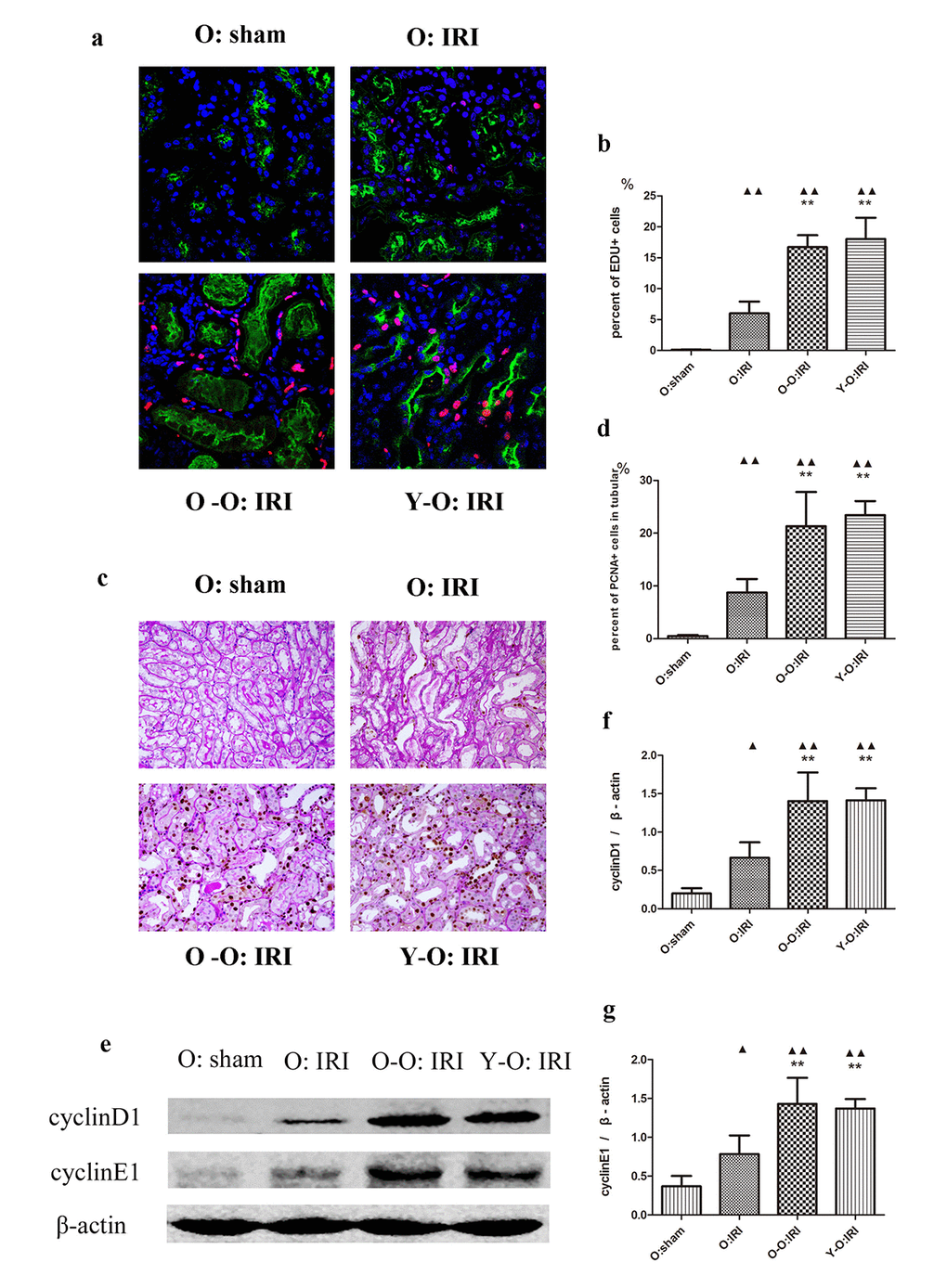 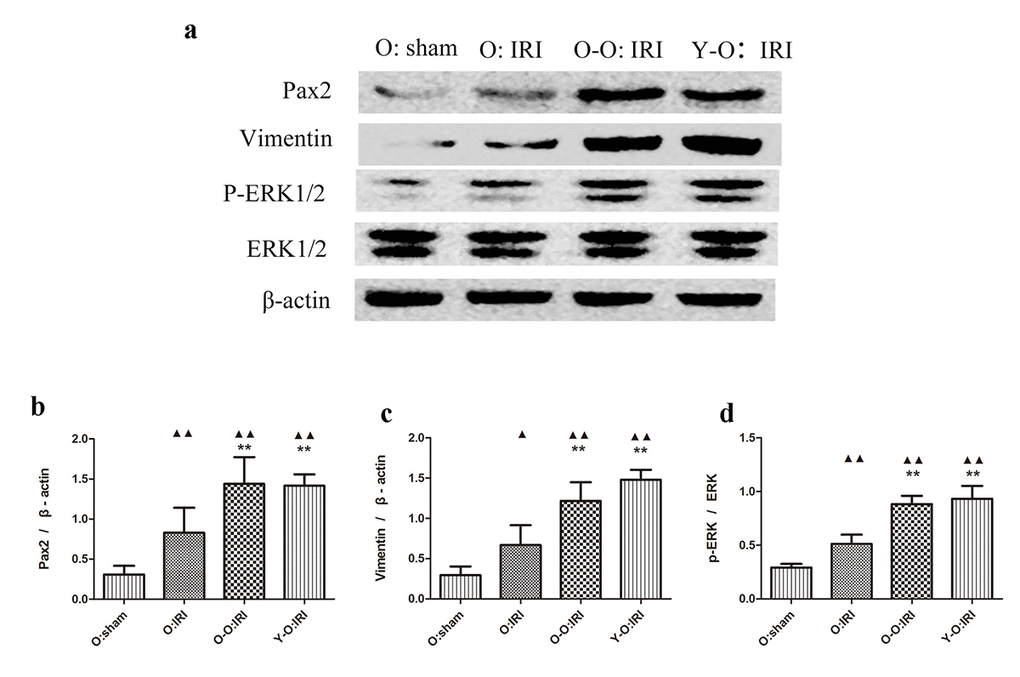 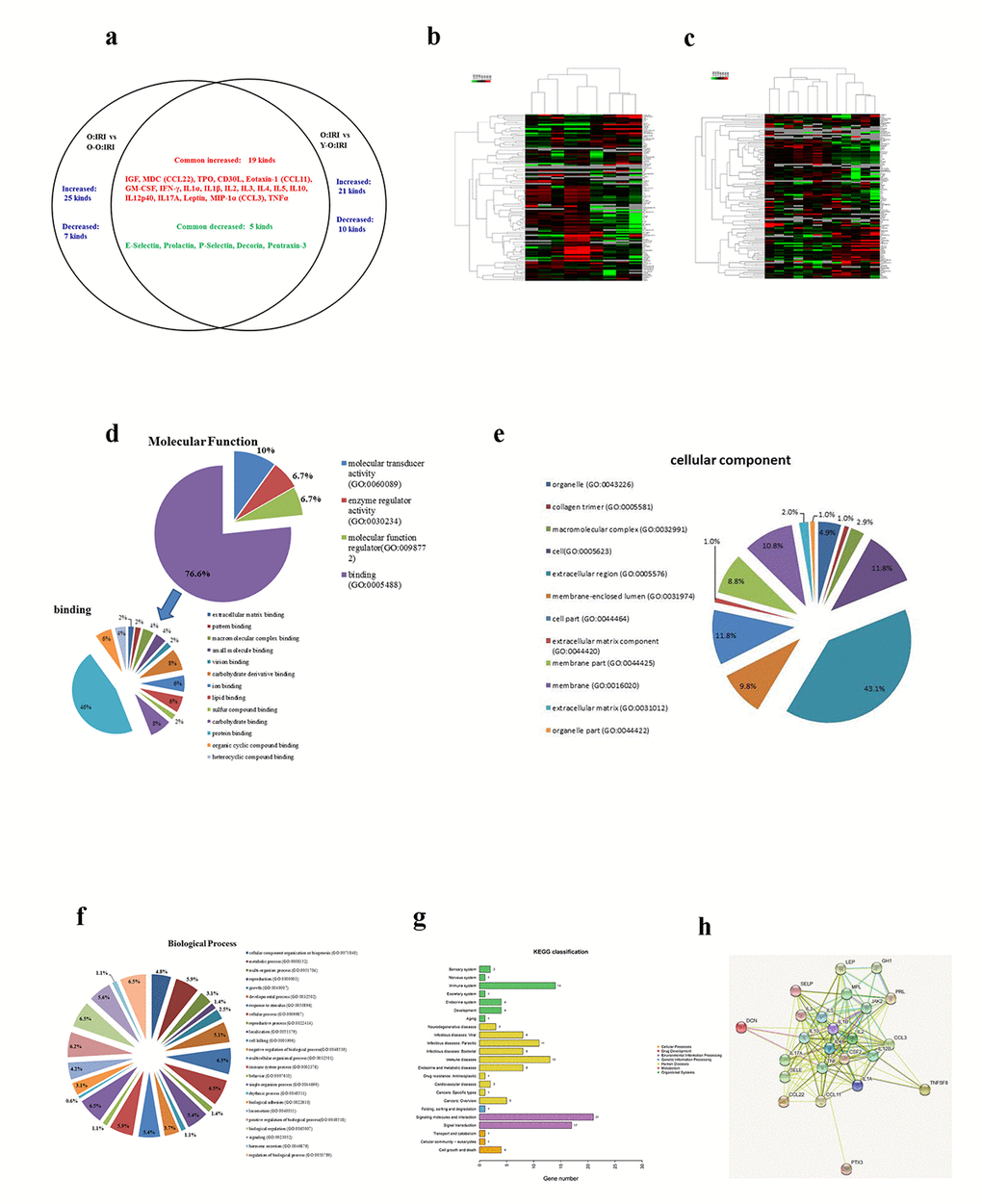 Paraffin-fixed sections were stained with periodic acid–Schiff (PAS), and pathologic examinations were performed by interpreters that were blind to patient identities. We examined pathologic characteristics including cell necrosis, loss of brush borders, cast formation, and tubular dilatation. We scored tubular injury semiquantitatively using a scale of 0–5, where 0, 1, 2, 3, 4, and 5 represents normal findings, ≤ 10%, 11–25%, 25–50%, 50–75%, and > 75%, respectively, based on previous studies [40,41]. We evaluated 10 random non-overlapping fields per animal for scoring [41].

EdU staining was performed according to the protocol of the Click-iT® EdU Imaging Kit (Life Technologies). We obtained frozen renal sections from old IRI mice; after being fixed with 4% paraformaldehyde and placed with 0.5% Triton X-100 for 5 min, sections were incubated with Click-iT® reaction mixture for 30 minutes. Sections were subsequently immersed with (Fluorescein isothiocyanate; FITC)-conjugated anti-LTL (FL-1321; Vector Labs; 1:1,000) at room temperature for 1 hour, with nuclei counterstained by DAPI. Finally, we used a confocal microscopy (Nikon C1 Eclipse; Nikon) and a standard fluorescence microscopy (Nikon Eclipse 90i; Nikon) to observe the stained sections, and quantified the percentage of EdU-positive cells.

We performed antigen retrieval from sections by microwaving them for 10 minutes in 10 mM sodium citrate buffer (pH 6.0), incubated them in 3% hydrogen peroxide for 30 minutes, and placed them in 1.5% normal goat serum for 40 minutes. Sections were subsequently incubated in PCNA (Abcam, 18197, 1:1000) at 4 °C overnight, followed by immersion in biotin-conjugated goat anti-rabbit IgG for 40 minutes, and finally in streptavidin-conjugated peroxidase for another 30 minutes. We also added 3,3′ diaminobenzidine and performed PAS staining. We observed the processed sections under a light microscopy, with percentages of PCNA-positive tubular cells quantified.

We collected peripheral blood and centrifuged the specimens, storing serums at -80 °C, followed by protein extraction. We measured 120 cytokines quantified by the Quantibody Mouse Cytokine Antibody Array 2000 (QAM-CAA-2000-4, RayBiotech, Inc., Norcross, GA, U.S.A) according to product instructions. A strict cutoff value is a fold change higher than 1.5 or lower than 0.67, with a P value lower than 0.05. We analyzed proteomic results and visualized them with a heat map using the Cluster and TreeView softwares (http://rana.lbl.gov/EisenSoftware.htm).

All data were analyzed using the SPSS Statistics 13.0 software. Data are expressed as means ± standard deviations (SDs). Statistical analyses were carried out by analysis of variance (ANOVA) followed by appropriate post hoc tests, including multiple comparison tests (least significant difference). Cumulative survival were carried out by an analysis of the log rank test (Kaplan–Meier). P-values < 0.05 were considered statistically significant.

All the authors declare no competing interests. The results presented in this paper have not been published previously in whole or part, except in abstract format.