Notch refers to a set of genes encoding a family of transmembrane receptors in mammalian cells. Previous evidence indicated that Notch receptors were implicated in the onset of gastric cancer. However, there is little evidence on the different genetic expression patterns of the four Notch receptors and their values for patient prognosis. Most recently, we investigated the transcriptional data of Notch receptors and related patient survival in patients with GC based on several databases, including ONCOMINE, GEPIA, Kaplan–Meier Plotter, cBioPortal and TIMER. According to our findings, gastric cancer tissues, compared with adjacent normal tissues presented a higher level of expression of Notch1/2/3. We also performed a survival analysis and noted that gastric cancer patients with high transcription levels of Notch1/2/3/4 had a low relapse-free survival. In gastric cancer patients, higher levels of infiltration in their CD4+ T cells, macrophages, neutrophils, and dendritic cells were positive associated with the expression of Notch receptors. Notch expression had significant association with diverse immune marker sets in gastric cancer. Overall, this study provides evidence that Notch1/2/3/4 could become the potential targets for precision treatment and new biomarkers in the prognosis of gastric cancer.

Gastric cancer (GC) is a very common disease worldwide and has the second highest mortality rate among all cancers. In the past decade, researchers have found that the deregulated expression of specific genes can increase the risk of GC. According to microarray analysis, previous studies revealed that in GC tissues the expression of specific genes is different from that in adjacent normal tissue. Although significant progress has been achieved in GC diagnosis and treatment, the five-year survival of patients is still unsatisfactory [1]. Researchers have identified epigenetic and genetic alterations as some of the main factors inducing GC. However, the underlying molecular pathogenic mechanisms on molecular level are still obscure. Hence, it is important to identify prognostic markers and potential drug targets to enhance prognosis and individualized treatments.

The Notch signaling pathway is highly conserved among various species. In mammals, four type I transmembrane Notch receptors (Notch 1-4) are synthesized, all of them with unique roles during the generation of immunocytes [2, 3]. Notch signaling also exerts important function in the development and tissue homeostasis of various organ [4, 5]. Provided the importance of Notch signaling in regulating cellular behavior, it is perhaps not surprising that Notch also has an important role in many types of cancer, particularly due to its importance in the regulation of stem and progenitor cells. Several mechanisms such as epigenetic regulation, posttranslational, modifications, gene overexpression and mutations, may lead to the dysregulation of the Notch pathway [2]. Interestingly, Notch activity is associated with oncogenic and tumor-suppressive functions [6, 7]. It is involved in cell survival, cell death pathways, proliferation and growth arrest, as well as cell differentiation into terminally differentiated cells versus cancer cell “stemness” [8]. These functions provide evidence of a context-dependent nature of Notch-induced cellular reactions.

The onset of GC can be described as the result of interactions between a series of factors concerning genetics, epigenetics and the external environment, which jointly lead to the deregulation of the signaling pathways that may induce the onset of cancer [9, 10]. Further, there has been a general belief that it is the dysfunctional oncogenic pathways that induce the onset of GC, which may include the epidermal growth factor receptor (EGFR), Notch, Hedgehog, nuclear factor-κB and Wnt/β-catenin pathway [11]. Among these pathways, Notch signaling is involved in direct cell-cell communication, cell differentiation, proliferation and apoptosis [12].

The balance between immune effector cells in the tumor microenvironment helps the malignant cells escape from the immune response. Tumor infiltrations of tumor associated macrophages, neutrophils, regulatory T cells are correlated with poor prognosis [13–15]. Tumor infiltrating CD8+ cytotoxic T lymphocytes and DCs are generally associated with favorable outcome of GC [16, 17], although some subsets of these immune cells have inverse prognosis prediction values. High ratios of Foxp3+/CD4+ and Foxp3+/CD8+ in tumors are associated with a poor prognosis [18, 19]; whereas high Th1/Th2 ratio in tumors predicts a good prognosis [20].

In previous studies, researchers have investigated the consequences of dysregulation of the Notch pathway and how it relates to clinicopathological features and prognosis in human GC. Nevertheless, the role of Notch family members in the development and progression of GC remains unknown. This study aims to address this question through in-depth analysis of the mutational activation and expression of Notch family members and their link with prognosis and immune infiltrates in GC patients.

Transcriptional levels of Notch in patients with GC 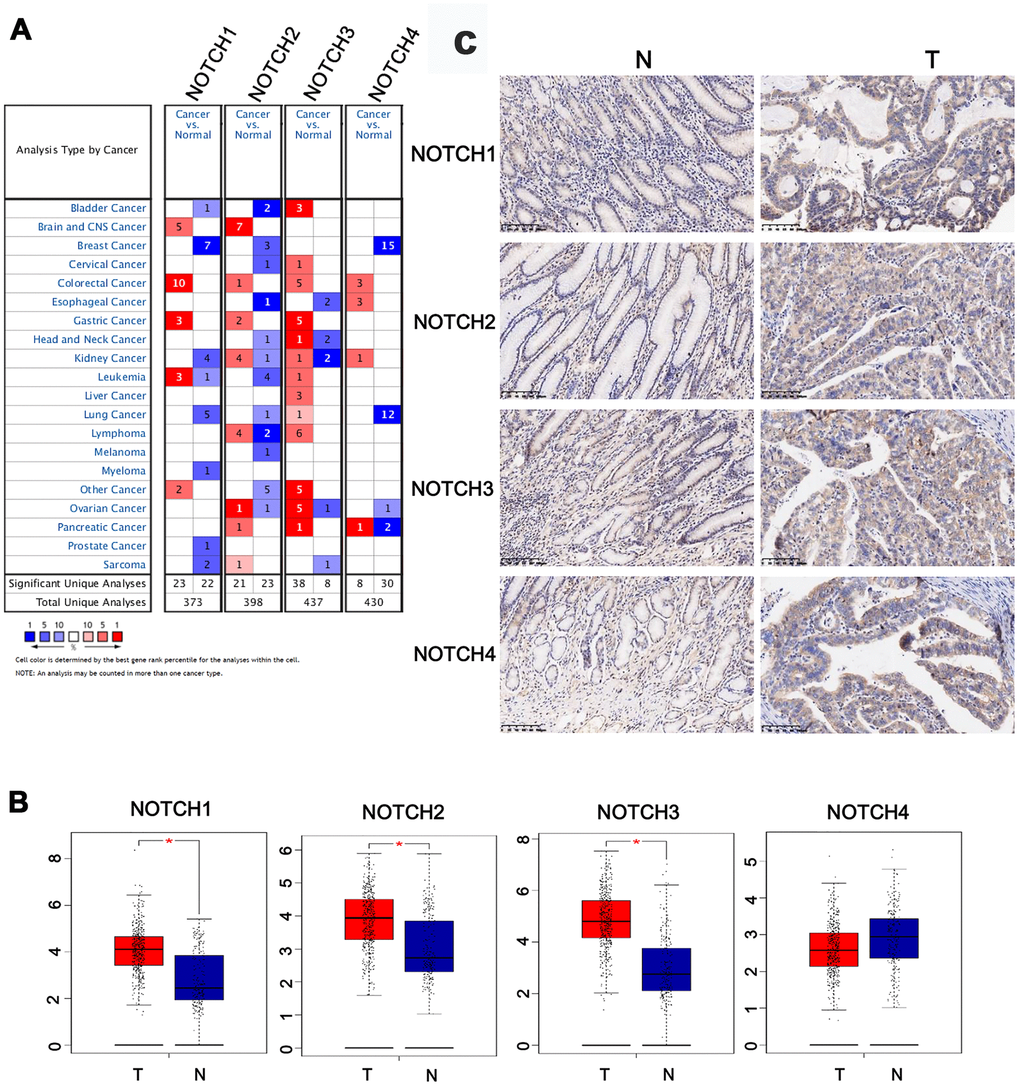 Table 1. The significant changes of Notch expression in mRNA level between different types of GC and stomach tissues.

In this study we also conducted further research to investigate how the survival of GC patients was affected by Notch. Kaplan–Meier Plotter tools were applied to analyze the correlation between Notch mRNA levels and the survival of patients with GC in 882 gastric tumors. According to the results of analysis, all the sampled GC patients were negative correlated with mRNA expression of all the four types of Notch in terms of post-progression survival (PPS), progression-free survival (FP), and overall survival (OS) (p < 0.05) (Figure 2A–2D). We further validated these results through the analysis of samples from gastric adenocarcinoma patients with immunohistochemistry (Figure 1C) and survival analysis. The patients with higher Notch1/2/3/4 expression levels had worse overall survival than those with lower Notch1/2/3/4 expression levels (Figure 3A–3D). Generally, lower Notch mRNA expression levels in GC patients indicated higher PPS, FP, and OS. 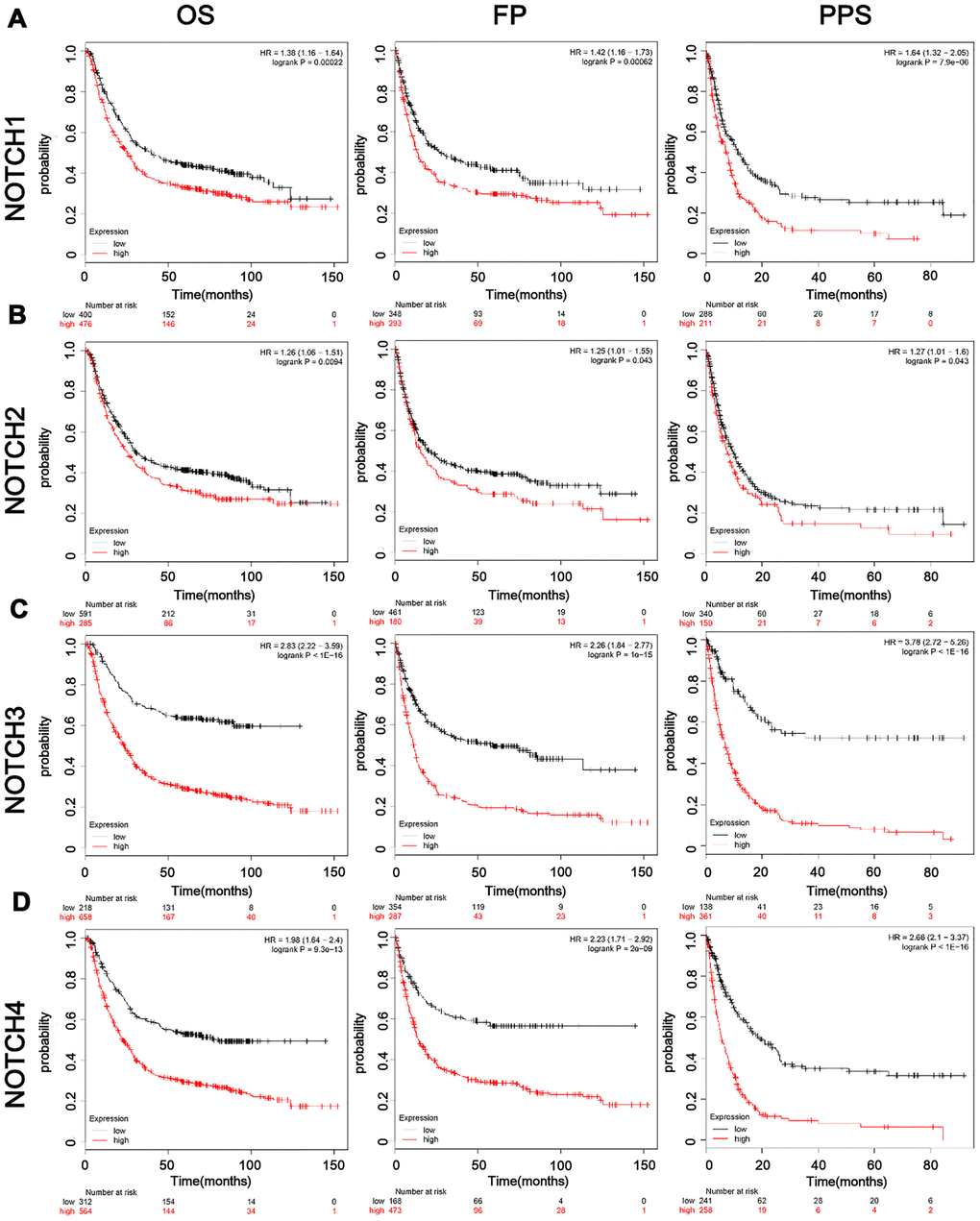 Figure 2. The prognostic value of mRNA level of Notch receptors in GC patients. (A–D). Logrank test was used in analysis of OS/FP/PPS. 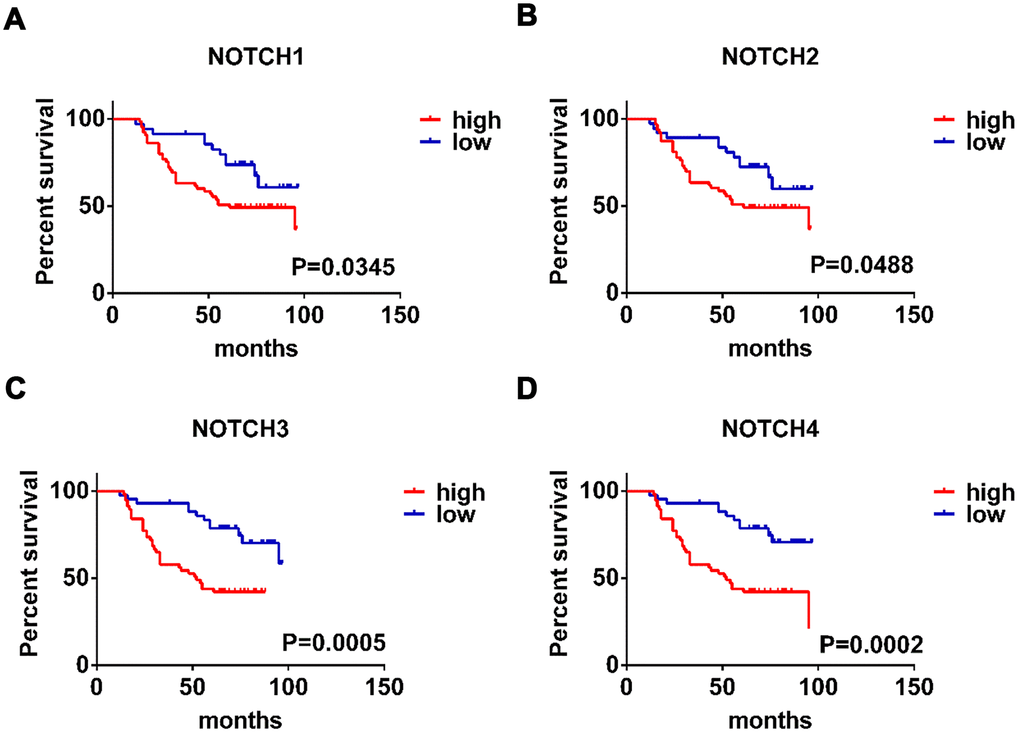 Cellular functions, pathways and frequently altered neighbor genes predicted to be affected by changes in Notch receptors in patients with GC 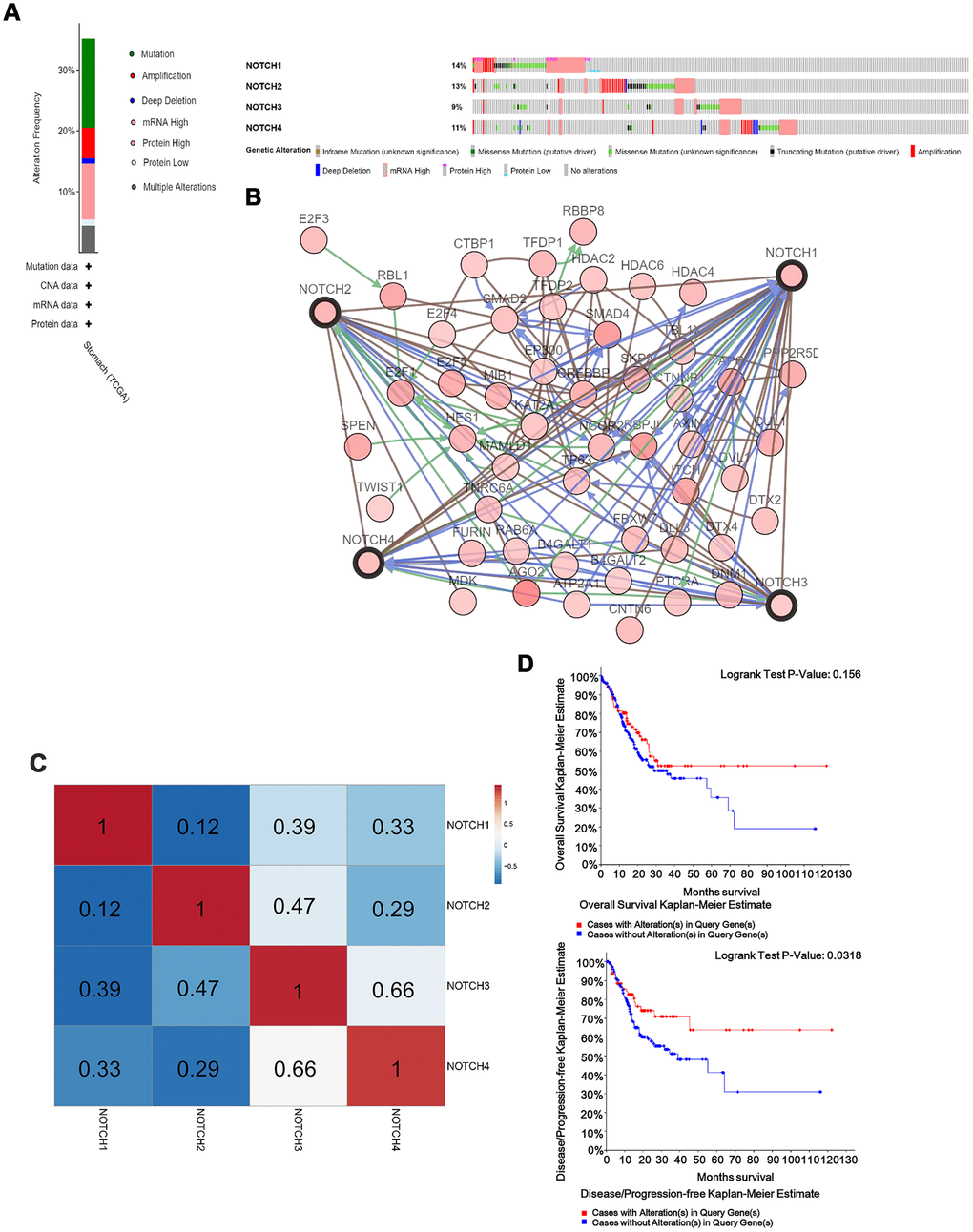 Figure 4. Notch genes expression and mutation analysis in GC. (A) Notch1, Notch2, Notch3 and Notch4 mutation rates were 14%, 13%, 9% and 11%, respectively. (B) Network for 4 Notch receptors and the 50 most frequently altered neighbor genes. (C) Genetic alterations in Notch receptor were correlated with longer DFS in gastric adenocarcinoma patients. (D) The relationship between genetic alterations in Notch and OS/DFS. Logrank test was used in analysis of OS/DFS. 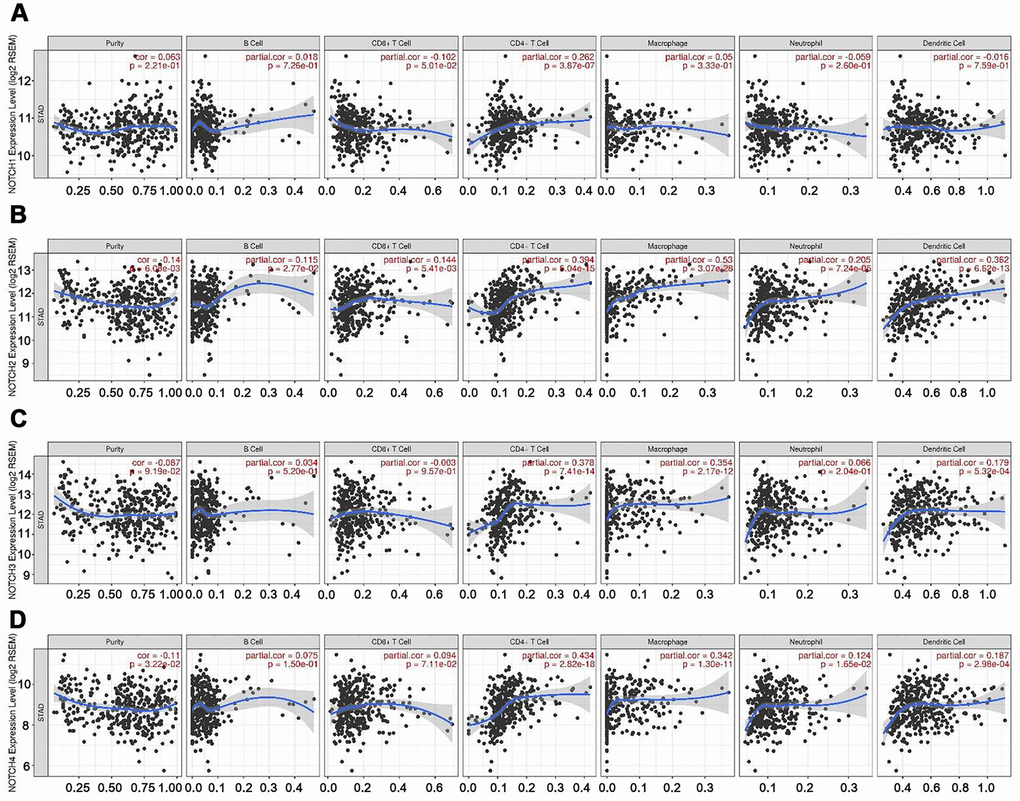 The importance and effect of the Notch signaling pathway on cellular activities and in cancer with either oncogenic or tumor-suppressive functions have been widely recognized [2, 25, 26]. Notch signaling functions as juxtacrine signaling between cells. This type of signaling allows Notch to regulate heterotypic interactions between stroma and tumor. These interactions are known to be of importance in various aspects of tumor biology, such as angiogenesis, cancer stem cell maintenance, immune infiltration, and resistance to therapy. Despite the already confirmed effects of Notch signaling on GC, the functions of different Notch family members in GC remain to be elucidated. In this study, we conducted detailed analyses on various members of Notch referring to mutation, expression and prognostic values in GC patients.

Results from our study showed that over-expression of mRNA and protein were found in Notch family members. Also, higher mRNA expressions of Notch1/2/3/4 were significantly associated with shorter OS in GC patients. Moreover, a high Notch mutation rate (47%) was observed in gastric adenocarcinoma patients. Further, genetic alteration of Notch receptors was associated with shorter DFS in gastric adenocarcinoma patients. Finally, the functions and pathways affected by mutations in Notch receptors as well as the most significant 50 frequently altered neighbor genes in gastric adenocarcinoma patients were analyzed. Results showed that cell cycle-related genes, including E2F1, E2F3, E2F4 and E2F5, and histone acetylation-related genes, including HDAC2, HDAC4 and HDAC6 were significantly affected by mutations in Notch receptors. Results also showed the following to be remarkably regulated by Notch mutation in GC: biological processes such as receptor activity, calcium ion binding and enzyme binding; cellular components such as Golgi membrane, endoplasmic reticulum membrane, and receptor complex; molecular functions such as Notch signaling pathway and transcription initiation from RNA polymerase II promoter; KEGG disease terms such as cancers, cancers of the digestive system and musculoskeletal diseases; KEGG pathways such as cell cycle, Notch signaling pathways and TGF-β signaling pathway.

Of note, Notch1 played a critical role in regulating the senescence secretome in fibroblasts [27], which was perhaps a part of its function in the regulation of stromal activation in the process of tumorigenesis. In breast cancer models, Notch1 was induced by fibroblast-derived CCL2 to maintain a stem cell phenotype and had a possible oncogenic role [17, 28]. Importantly, Notch1 activation enabled primary melanoma cells to acquire metastatic capabilities [29]. In gastric cancer, the AKT1/NF-kB/Notch1/PTEN axis had a significant role in the development of chemoresistance [30]. Notch1 activation also showed correlation with GC progression and was defined as an independent prognostic factor [31]. In B cell lymphoma, Jag1 induced the expression of FGF4 which in turn activated Notch2 in lymphoma cells [32]. Notch ligand Jag1 interacted with Notch3 to regulate the resistance [33]. Moreover, Notch3 triggered by stromal cell-derived exosomes activated antiviral signaling depending on STAT1 in cancer cells [33]. Induction of Notch3 by CAFs led to an increase in proliferation of cancer stem cells [34]. Meanwhile, the renewal of cancer stem cell could be induced by IL-6 through Notch3 in breast cancer [35]. Notch4 had a causative role in the tumorigenesis [36] and might affect the development of fibroblasts [37]. Recent data also showed that Notch is involved in liver glucose and lipid homeostasis [38, 39].

In this study, a systemic analysis was performed on Notch receptors expression, mutation and GC patients’ prognosis, which provided a further understanding of the biomolecular properties of GC. Our results demonstrated that the high expression of Notch1/2/3/4 in GC tissues might exert a significant function in GC tumorigenesis. High Notch1/2/3/4 expression could also act as molecular markers to categorized high-risk subgroups of GC patients. According to the present study, Notch1/2/3/4 could be potential therapeutic targets for GC, and transcription levels of Notch1/2/3/4 could be potential prognostic markers overall promoting GC survival and prognostic accuracy.

Using the online cancer microarray database, ONCOMINE (https://www.oncomine.org/), we analyzed the transcription levels of Notch in various cancers tissues. A students’ t-test was performed to conduct a comparative analysis of the different Notch expression in normal tissues versus cancer tissue samples. The cut-off value for a significant fold change was 1.5, while the cut-off value for significant p value was 0.0001.

GEPIA (http://gepia.cancer-pku.cn/), a web server for analyzing the sequencing expression data of RNA based on 9,736 tumors and 8,587 normal samples from the cancer genome atlas (TCGA) and the GTEx projects [40], was used for analysis of differential expression.

Kaplan-Meier Plotter (https://kmplot.com/) was applied to the assessment the prognostic value of Notch. This online database provides gene expression data and information on patients’ survival performance based on 882 clinical GC cases [41]. All the sampled patients were categorized into groups based on median expression of Notch (high vs. low expression) to analyze the overall survival (OS), progression-free survival (FP), and post progression survival (PPS) of GC patients using a Kaplan-Meier survival plot. We only chose the best JetSet probe set of Notch to obtain Kaplan-Meier plots.

This study was supported by the National Natural Science Foundation of China (grant No. 81270440).