Copyright: © 2020 Gu et al. This is an open access article distributed under the terms of the Creative Commons Attribution License (CC BY 3.0), which permits unrestricted use, distribution, and reproduction in any medium, provided the original author and source are credited.

Osteoporosis is a condition in which bone becomes weak which is characterized as low bone mass and structural deterioration. As a result, bone tissue becomes fragile and shows increased vulnerability to fracture. World wide, osteoporosis affects about 200 million people and is often unrecognized until one encounters a fracture due to the silent nature of the disease [1]. Under healthy conditions, bone is maintained by the constant process of bone remodeling. Normal bone remodeling maintains a balance between bone resorption and formation to maintain bone density. Osteoblasts are generated from the osteogenic differentiation of mesenchymal stem cells (MSCs). MSCs possess the capacity to self-renew and to differentiate into multiple cell types. It has been known that MSCs are common precursors for osteoblasts [2]. The direction of MSC differentiation depends on specific regulatory factors. RUNX-2 acts as a key transcriptional modulator that mediates the conversion of MSCs to osteoblasts [3]. Runx2 is a bone-related transcription factor homologous to the Drosophila protein, Runt [4]. Runx2 is post-translationally modified (PTM) downstream of a diverse set of signaling pathways whose coordinated action controls osteoblast differentiation and bone development [5]. Genes associated with matric formation, remodeling, and mineralization have been reported to be regulated by RUNX2 [6]. Runx2 is regulated by the p38 MAPK pathway, which plays an important role in osteoblast differentiation and bone formation [7]. As osteoblasts mature, they begin producing the bone extracellular matrix by secreting bone matrix proteins, including collagen type 1 alpha 1 (Col-I), osteocalcin (OCN), and alkaline phosphatase (ALP). Type I collagen is the main constituent of bone, comprising the non-mineralized bone matrix. The accumulation of calcium phosphate in the bone matrix by ALP leads to the mineralization of bone. Mature osteoblasts express ALP, Col-I, osteocalcin, and osterix [8]. It has been recognized that the normal differentiation capacity of MSCs is altered in osteoporosis, thereby hindering osteoblast formation [9].

GPR173 belongs to a subfamily of G protein-coupled receptors and is also referred to as super conserved receptor expressed in brain (SREB). These receptors are highly conserved and uniquely expressed in central neural systems. GPR173, originally termed SREB3, is the most conserved receptor in this family as human GPR173 and rodent GPR173 share 99% of the same amino acids [10]. GPR173 has been found to be present in various tissues and organs and possesses a diverse range of biological functions. Now, several studies have linked GPR173 as the receptor of phoenixin, a newly identified hormone. Phoenixin has been reported to be involved in the modulation of memory formation, depression, reproduction, and food intake [11, 12]. Two members of the phoenixin family, phoenixin-14 amide and phoenixin-20 amide, which are comprised of 14 or 20 amino acid chains, respectively, have been isolated and identified. It has been shown that the hypothalamus is the tissue with the greatest expression of phoenixin, and phoenixin 20 is the predominant isoform of phoenixin [11]. Previous studies have reported pleiotropic roles of phoenixin in regulating sensory perception, body weight, reproduction, and the cardiovascular system [13]. For example, phoenixin plays an important role in the release of luteinizing hormone (LH) by augmenting the release of gonadotropin-releasing hormone (GnRH), which is mediated by GPR173 [14]. Although this peptide has been linked with the development of obesity, diabetes, cardiovascular diseases, anxiety, and depression, further investigations are helpful in specifying the physiological functions of phoenixin, and especially peripheral phoenixin. In this study, we aimed to investigate the biological function of GPR173 and its agonist phoenixin 20 in osteogenic differentiation. Our results indicate that the GPR173 agonist phoenixin 20 promotes osteoblastic differentiation mediated by the p38/RUNX-2 pathway.

GPR173 is expressed in osteoblast cells

To clarify the function of GPR173 in osteogenic differentiation, we first assessed its expression profile in osteoblastic precursor cells MC3T3-E1. MC3T3-E1 cells are a pre-osteoblast cell line and possess the ability to differentiate into osteoblasts, which have been widely used for an ideal model for the differentiation, matrix deposition, and mineralization of osteoblastic cells [15]. We used mouse brain lysate as the reference, which is known to express GPR173. By RT-PCR, we revealed that the relative mRNA expression of GPR173 in MC3T3-E1 is comparable to its expression in brain tissue (Figure 1A). By western blot, we further confirmed the abundant expression of GPR173 as compared to its level in mouse brain (Figure 1B).

GPR173 is induced for osteoblast differentiation

Next, we monitored the expression profile of GPR173 during osteoblastic differentiation of MC3T3-E1 cells. In our experiment, the cells were fed with osteogenic medium (OM) to induce osteoblastic differentiation. Our time-course experiment showed that the mRNA level of GPR173 was gradually induced up to about 4-fold after 3, 7, and 14 days of induction (Figure 2A). Meanwhile, the western blot experiment confirmed a similar trend of time-dependent induction of GPR173 over the same periods of time (Figure 2B).

The p38 MAPK kinase is important for osteoblastic differentiation. Compared to non-treated cells, two hours in the osteogenic media with phoenixin 20 induced a significantly greater increase in the amount of p-p38 (Figure 5). To verify the involvement of p38 in phoenixin 20-mediated osteoblast differentiation, we added the p38-specific inhibitor SB203580 in our 14-day differentiation experiment. The experimental results show that as compared to normal media, the induction of RUNX-2 transcripts was reduced by about 50% when SB203580 (10 μM) [16] was added to the media supplemented with phoenixin 20 (Figure 6A). Alizarin Red S staining demonstrated that matrix mineralization from the cells in media with SB203580 was less than half of that observed in the normal media (Figure 6B). The cells treated with SB203580 had about 505% ALP activity (Figure 6C). 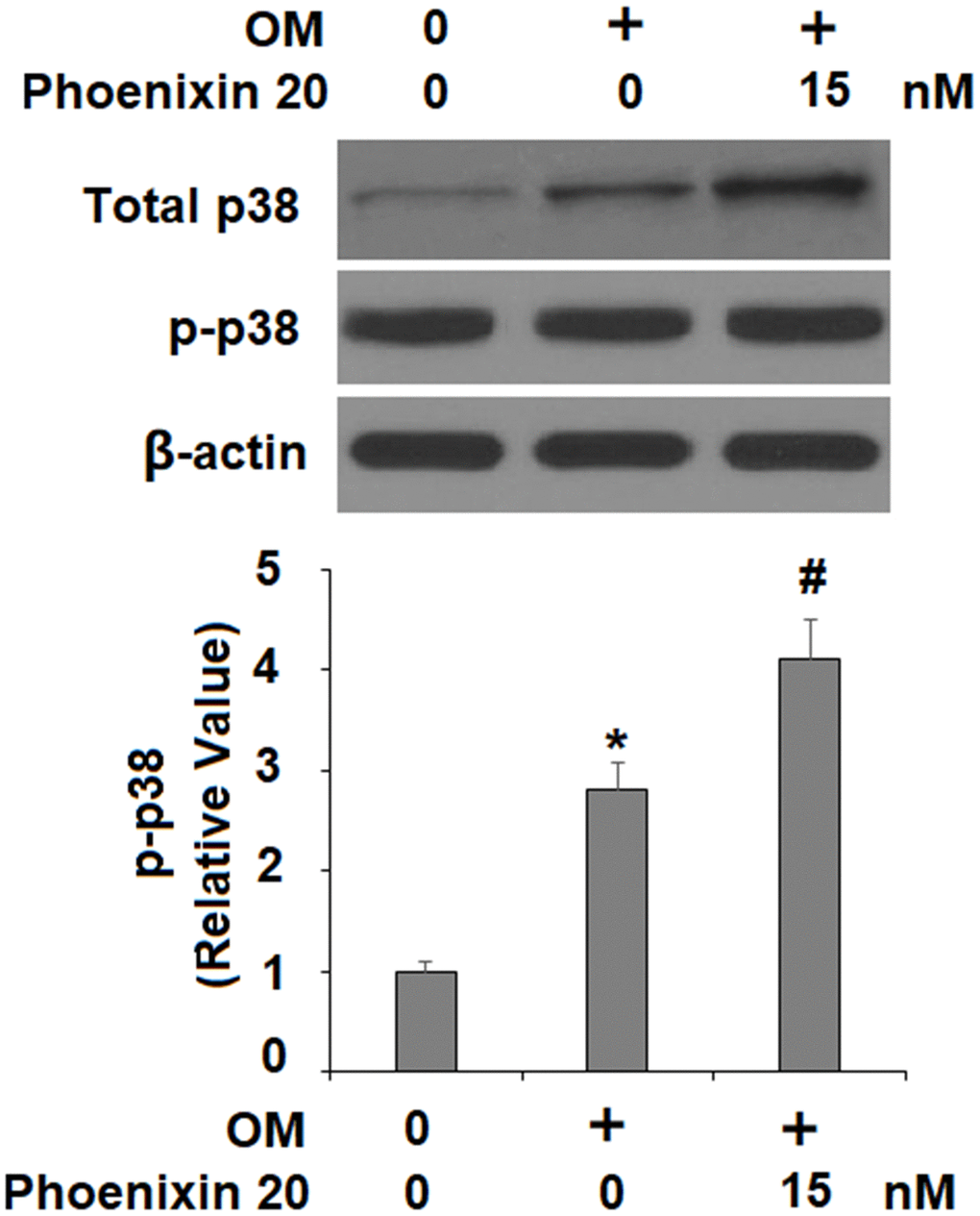 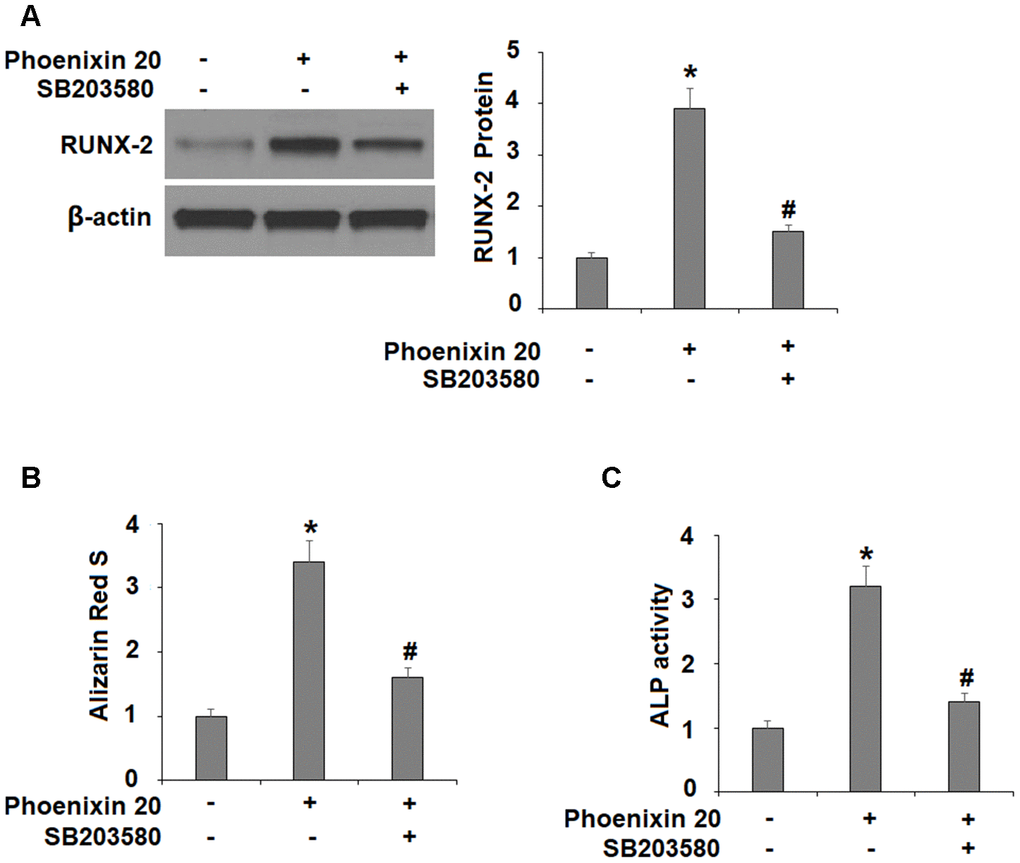 Finally, we silenced GPR173 in MC3T3-E1 cells and evaluated the effects of its loss of function on phoenixin 20-mediated osteoblastic differentiation. Our western blot experiment confirmed that GPR173 was silenced by more than 60% after transfection with specific siRNA (Figure 7A). Compared to scramble cells, phoenixin 20-mediated osteoblastic differentiation was significantly weakened in GPR173-silent cells. RUNX-2 induction (Figure 7B), matrix mineralization (Figure 7C), and ALP activity (Figure 7D) were each reduced by about half in knockdown cells as compared to scramble cells. 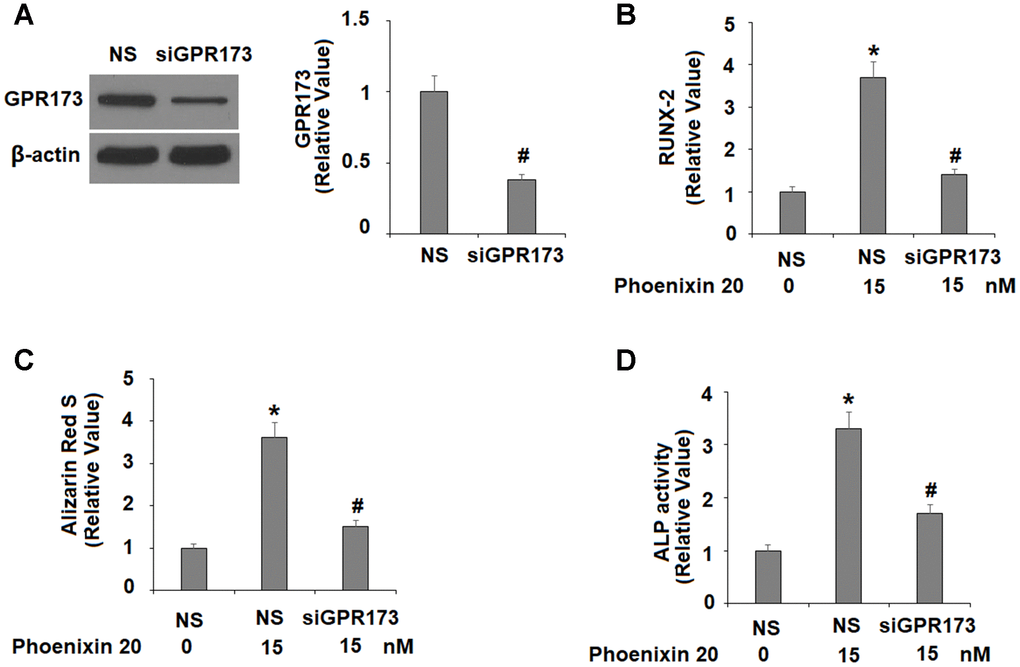 Osteoblasts are bone-building cells, and the fine regulation of osteogenic differentiation is critical to the process of bone formation, modeling, and remodeling. The understanding of signaling pathways involved in osteogenic differentiation may result in the discovery of potential targets of osteoporosis. The most common risk factors for osteoporosis include age, menopause-associated hormone changes in women, changes in physical activity, drugs, and other diseases [17, 18]. It is widely accepted that age-associated growth hormone, estrogens, and other hormones play a key role in the maintenance of bone homeostasis and the development of osteoporosis [19, 20]. Phoenixin represents a class of newly identified secreted peptides which influence neural and reproductive function in mammals [11, 12]. In 2013, a Stanford group successfully identified this peptide and dubbed it phoenixin [14]. Since then, collaborative efforts have led to the discovery of two major cleavage isoforms of phoenixin: a 20 amino acid peptide named phoenixin-20 and an N-terminally truncated form with 14 amino acid named phoenixin-14. The same group also reports that phoenixin 20 and phoenixin 14 have very similar biological actions [21]. However, both phoenixin 20 and phoenixin 14 were recently isolated from diverse tissues, including the brain, heart, lung, and stomach, suggesting that this class of peptides could have diverse functions [22].

Metabolic control of bone remodeling is influenced by systematic hormonal regulation and local factors. The rate of remodeling is determined by loading and endocrine influences. Endocrine hormones, neural transmitters, and peptides produced by the CNS deliver signaling molecules to the environment surrounding bone cell surface receptors and thus influence bone remodeling [26]. Our study indicates that phoenixin 20, a newly recognized reproductive or neuronal hormone, could be another candidate for a neuronal regulator of bone metabolism.

So far, the signaling mediators of phoenixin 20 and its receptor GPR173 remain largely unknown, and our finding demonstrates that phoenixin 20-GPR173 signaling could play important roles in the regulation of bone remodeling. The main challenge in stem cell-based osteoporosis therapy is the direction of differentiation. How this ligand and receptor achieve regulatory function in bone metabolism and how they may interact with other signaling pathways to fine tune specific biological event would be of great interest for future studies, as they are potentially druggable molecular targets for treating various physiological diseases. Additionally, we only used an in vitro cell model in the current study. Future study using animal models will shed light on its potential therapeutic implications for osteoporosis.

Cells were collected for gene expression profiling related to osteogenic differentiation. To perform qRT-PCR, RNA was isolated using Trizol (Invitrogen, USA) [29]. cDNA was produced from 2 μg RNA with reverse transcriptase as described by the M-MLV manual (New England Biolabs). For RT-PCR, GPR173 primers were used. The relative quantity of GPR173 was normalized to GAPDH. The expression of RUNX-2, ALP, Col-I, Osx, and OCN was detected using qPCR with SYBR Green Mix Kits (Applied Biosystems, USA). All results were quantitated using the 2-ΔΔCt relative quantification method. The primer sequences were included in Table 1.

After reaching full confluence, the cells were equilibrated with ALPL buffer and incubated with 0.2 mg/mL nitro blue tetrazolium and 5-bromo-4-chloro-3-indolyl-phosphate (Sigma-Aldrich, USA). Cells were stained with ALPL buffer at room temperature for 2 hours. The fluorescent signal was measured using a microplate reader (405 nm).

Matrix mineralization was assessed through staining with Alizarin Red S. After stimulation, the cells were washed, followed by fixation with ethanol (70%) for 45 minutes. Cells were then stained with the dye Alizarin Red S. Fluorescence signals were visualized using a fluorescence microscope.

Experiments were repeated for 3 times. Results are presented as means ± Standard Deviation (S.D.). The multiple group differences were assessed by analysis of variance (ANOVA) using the SPSS software (version 22.0), followed by the Bonferroni’s post-hoc test. A p-value < 0.05 was considered to be statistically significant.

This study is supported by the National Science Foundation for Young Scientists of China (Grant No. 81802237).