Copyright: © 2020 Pan et al. This is an open access article distributed under the terms of the Creative Commons Attribution License (CC BY 3.0), which permits unrestricted use, distribution, and reproduction in any medium, provided the original author and source are credited.

Mendelian randomization (MR), using genetic variants as instrumental variables, is a method that enables strong causal inference between a risk factor and a disease [9]. In this study, we aimed to use MR analysis to evaluate the causal association between glycemic traits and Alzheimer’s disease. 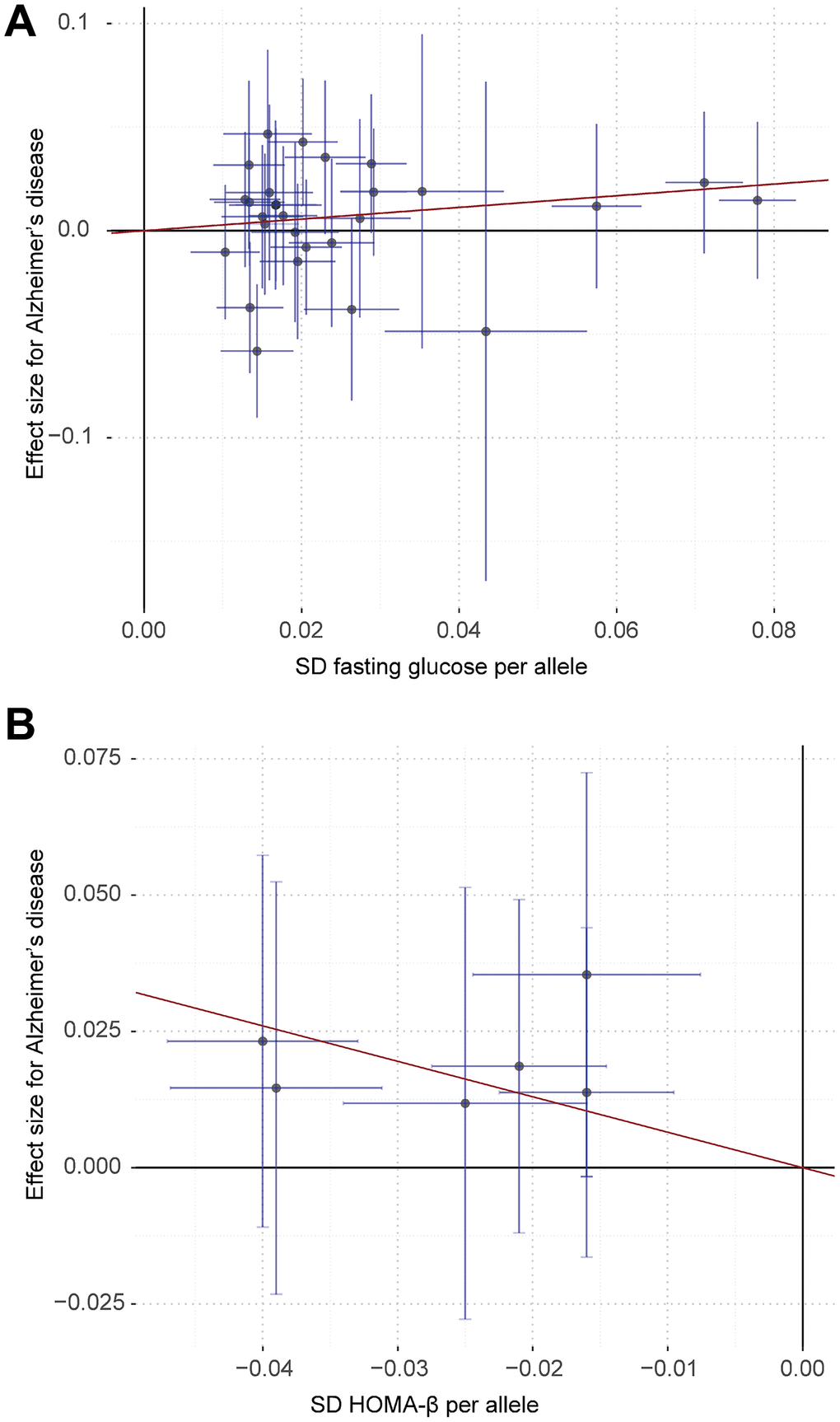 Impaired glucose metabolism, which is modifiable, contributes to Alzheimer’s disease pathogenesis. It was even proposed that Alzheimer’s disease may be a brain-specific form of diabetes mellitus, a “type 3 diabetes” [10]. However, the precise mechanisms involved in the association of glucose metabolism with cognitive decline and Alzheimer's disease are not yet fully understood. Several assumed mechanisms have been proposed. Hyperglycemia may induce increased peripheral utilization of insulin and reduce insulin transport into the brain, ultimately producing brain insulin deficiency [11]. Impaired glucose metabolism, such as type 2 diabetes and insulin resistance, may lead to impaired neuronal insulin signaling, neuroinflammation, oxidative stress, resulting in amyloid-β accumulation, tau hyper-phosphorylation and subsequent cognitive decline and Alzheimer's disease [12, 13]. Recent studies showed that diabetes and insulin resistance were also associated with brain atrophy and aberrant functional connectivity [14, 15].

In the last decades, accumulating observational evidence has demonstrated that type 2 diabetes and insulin resistance were associated with cognitive decline or Alzheimer’s disease [3–7]. A meta-analysis showed that diabetes mellitus was associated with a 1.6-fold higher risk of Alzheimer’s disease [3]. In the English Longitudinal Study of Ageing study with 5189 participants and 10-year follow-up, HbA1c levels and diabetes status were associated with long-term cognitive decline [4]. Other longitudinal studies from Finland also observed significant association between insulin resistance and long-term cognitive decline [6, 7]. However, the association was nonsignificant between type 2 diabetes, insulin resistance or HbA1c and cognitive state or Alzheimer’s disease in a recent British cohort study and previous MR analyses [8, 16, 17]. The present study further emphasized the causal effect of high fasting glucose, pancreatic β-cell dysfunction on high risk of Alzheimer’s disease. This also indicated that the prediabetic stage could be a potential time-point for preventative treatment of Alzheimer’s disease. This result was supported by a recent study with 34year follow-up that found an U-shaped relationship between fasting insulin and dementia and excess risk for dementia in subjects with low level of insulin [18]. Potential explanation of the negative associations for fasting insulin and HOMA-IR in our study included weak instruments and small sample size. Furthermore, this might be caused by that HOMA-IR mainly reflect hepatic insulin resistance instead of brain insulin resistance [19].

The strength of the study is the design of MR analysis based on large-scale GWAS studies. The MR design uses genetic variants as instrumental variables to estimate the association between an exposure and a disease. As genetic variants are randomly allocated at meiosis and independent of other factors that may bias observational studies, MR analysis is not prone to potential reverse causation and unmeasured confounders, such as dietary and lifestyle preference, and thus can strengthen the evidence for causal inference [9]. Using two-sample MR method, we were able to test the effect of glycemic traits on Alzheimer's disease based on data from a large-scale cohort (17,008 cases and 37,154 controls). Nevertheless, potential bias may exist due to the nature of two-sample MR method since data of associations of SNP-exposure and SNP-outcome were derived from 2 different populations. Results in previous one-way or two-way MR analyses showed nonsignificant association between type 2 diabetes or fasting insulin with Alzheimer’s disease [16, 17, 20], but were not consistent for fasting glucose [16, 17, 21]. Another MR study found insulin sensitivity polygenic score formed from a subset of type 2 diabetes associated SNPs, but not the overall type 2 diabetes polygenic score, was causally associated with Alzheimer’s disease [22]. Our study distinguished from previous MR studies [16, 17, 20–22] by comprehensive evaluation of six glycemic traits and strict selection of instruments via exclusion of SNPs with potential pleiotropic effects.

Our study has several limitations. First, our analyses were performed in the population of European ancestry and may not be generalized to those of non-European ancestry. However, recent studies provided evidence of shared genetic architecture for glycemic diseases across ethnic groups [23]. The uniformity of ancestry minimizes the risk of bias by population admixture. Second, the estimates may still be biased by potential for residual pleiotropy (SNPs affect the outcome via a different pathway other than the exposure) [24]. However, we had a strict exclusion of instruments with potential pleiotropy and pleiotropic effect was not observed in MR-Egger regression. Third, further studies with large sample size are needed since the results were not validated in some sensitivity analyses in our study.

In conclusion, our two-sample MR analysis provides evidence of causal associations between glycemic traits, especially hyperglycemia and pancreatic β-cell dysfunction, and high risk of Alzheimer's disease. However, validating and replicating these findings in large-scale studies is warranted.

We designed a two-sample MR analysis to evaluate the causal effect of glycemic traits on Alzheimer’s disease (Figure 3). The MR design assumes that the genetic variants are associated with glycemic traits, but not with other confounders, and the genetic variants are conditionally independent of Alzheimer’s disease given glycemic traits and the confounding factors. Using the genetic variants as instrumental variables to assess the association between an exposure and an outcome, MR approach is a method that strengthens causal inferences and addresses susceptibility to potential confounding and reverse causation prone to conventional observational studies [9]. Six glycemic traits, including type 2 diabetes, fasting glucose, fasting insulin, HbA1c, HOMA-IR and HOMA-β, were evaluated. Data on the associations of SNPs with these glycemic traits and Alzheimer’s disease were obtained from recently published large-scale GWAS (Table 2) [25–30]. The protocols of the original studies were approved by the institutional review board of participating sites and informed consents were obtained from all participants.

Table 2. Characteristics of the GWAS used in this study.

All these SNPs were in different genomic regions and not in linkage disequilibrium with other SNPs in the same glycemic trait (r2<0.20). We performed a look-up of these SNPs in Phenoscanner to evaluate whether these SNPs were associated with other diseases or traits at genome-wide significance level (P< 5.0×10−8) which may indicate potential pleiotropic effects [31]. We found that eight SNPs for type 2 diabetes, eight SNPs for fasting glucose, six SNPs for HbA1c and one SNP for HOMA-β were also associated with other diseases or traits, such as white blood cell count, neutrophil count, low density lipoprotein cholesterol, high density lipoprotein cholesterol, triglycerides, total cholesterol, self-reported hypertension, coronary artery disease, years of educational attainment, serum urate (Supplementary Table 1). After exclusion of these SNPs and one SNP (rs12621844) for HbA1c not found in outcome datasets, we used the remaining 43 SNPs for type 2 diabetes, 28 SNPs for fasting glucose, 19 SNPs for fasting insulin, 36 SNPs for HbA1c, 6 SNPs for HOMA-β and 2 SNPs for HOMA-IR as the instrument in the MR analysis. Supplementary Table 2 shows the characteristics and associations of these included SNPs with the corresponding glycemic traits.

Two-sample MR approaches were used to compute estimates of each glycemic trait- Alzheimer’s disease association using summarized data of the SNP-glycemic trait and SNP-Alzheimer’s disease associations. The causal effect for each glycemic trait was evaluated by IVW method in which SNP-outcome coefficients were modeled as a function of SNP-exposure coefficients weighted by the inverse-variance of genetic associations with the outcome, assuming all SNPs were valid instruments [32]. In sensitivity analyses, we also performed complementary MR analyses using the penalized robust IVW, MR-Egger, simple median, weighted median, weighted MBE and MR-PRESSO methods for the traits of type 2 diabetes, fasting glucose, fasting insulin, HbA1c and HOMA-β. Sensitivity analyses were not performed for HOMA-IR since these methods require more than 2 variants. The penalized robust methods improved the robustness by penalizing the weights of candidate instruments with heterogeneous ratio estimates and providing robustness to outliers by performing robust regression [33]. The MR-Egger method was performed by the same weighted linear regression as IVW method but with the intercept unconstrained. The slope coefficient from the MR-Egger regression is a robust estimate of the causal effect against potential violations of assumptions due to directional pleiotropy (genetic variants affect the outcome via a different biological pathway from the exposure) [24]. The weighted median method used the weighted median ratio estimate with less weight given to outlying estimates and can provide a robust estimate even if up to 50% of instrumental variables are invalid [34]. The weighted MBE method used the mode of the IVW empirical density function as the effect estimate and can provide an estimate robust to horizontal pleiotropy [35]. The MR-PRESSO approach can detect and correct for pleiotropy via outlier removal in multi-instrument summary-level MR testing [36]. Heterogeneity between genetic variants was estimated by Q statistic in IVW method [34]. Potential pleiotropic effects were estimated by the values of intercept in MR-Egger regression. An intercept term that differs from zero indicates overall directional pleiotropy [24]. For the traits of fasting glucose and HOMA-β, we also performed a leave-one-out sensitivity analysis by leaving each genetic variant out of the MR analysis in turn to estimate the influence of outlying SNPs [37].

The associations between genetically predicted glycemic traits and Alzheimer’s disease were presented as ORs with their 95% CIs per 1-unit-higher log-odds of type 2 diabetes, 1-SD higher fasting glucose, fasting insulin and HOMA-IR, %-units higher HbA1c, and 1-SD lower HOMA-β (indicating pancreatic β-cell dysfunction), respectively. Trait values for fasting insulin, HOMA-IR and HOMA-β were naturally log transformed. The associations of each genetic variant with fasting glucose and HOMA-β were further plotted against their effects for the risk of Alzheimer’s disease. The threshold of statistical significance was 2-sided p-value <0.05. All analyses were performed using R version 3.5.3 (R Development Core Team). All data generated or analyzed during this study are included in this published article.