Copyright: © 2020 Liu et al. This is an open access article distributed under the terms of the Creative Commons Attribution License (CC BY 3.0), which permits unrestricted use, distribution, and reproduction in any medium, provided the original author and source are credited.

In this study, we constructed a model using a Cox proportional hazards model based on the expression of eight immune-related genes that were associated with prognosis in prostate cancer: EDNRB, ANGPTL2, TNFSF15, TNFRSF10D, EDN2, BMP2, NLRP14, and PLK1. We then identified associations between risk scores calculated with the model, tumor microenvironment characteristics, and immune cell infiltration. Prostate cancer patients in the high score group had poorer prognoses, and validation with the external GSE54460 dataset confirmed that the scoring model predicted biochemical recurrence with AUC values of 0.749 at 1 year, 0.804 at 3 years, and 0.774 at 5 years. Proportions of infiltrated M2 macrophages and regulatory T cells were increased in the high risk group, while CD8+ T cells were increased in the low risk group. Network analysis revealed that PLK1 may be a key regulator of the immune-suppressive microenvironment in prostate cancer. Double immunofluorescence labeling of a prostate cancer tissue microarray indicated that PLK1 expression correlated positively with numbers of infiltrating macrophages. These results indicate that an immune- related, gene-based risk score effectively reflects immune microenvironment characteristics and predicts prognosis in prostate cancer.

Prostate cancer poses a serious threat to the health of men all over the world [1, 2]. Although radical surgical excision and radiation therapy are effective in treating prostate cancer, only lung cancer has a higher mortality rate. In China, where prostate cancer screening is relatively uncommon, most patients have locally advanced or metastatic prostate cancer upon diagnosis. In these cases, endocrine therapy is typically used as the primary treatment. After about 18 months of endocrine therapy, most prostate cancers become resistant to hormone treatments, and no other effective clinical treatments are currently available. Novel immunotherapies are an important development in tumor treatment, and immune checkpoint inhibitors may be particularly effective. However, recent phase II clinical trials indicate that immune check point inhibitors are only effective against specific types of prostate cancer, and the disease control rate does not exceed 20% [3, 4]. 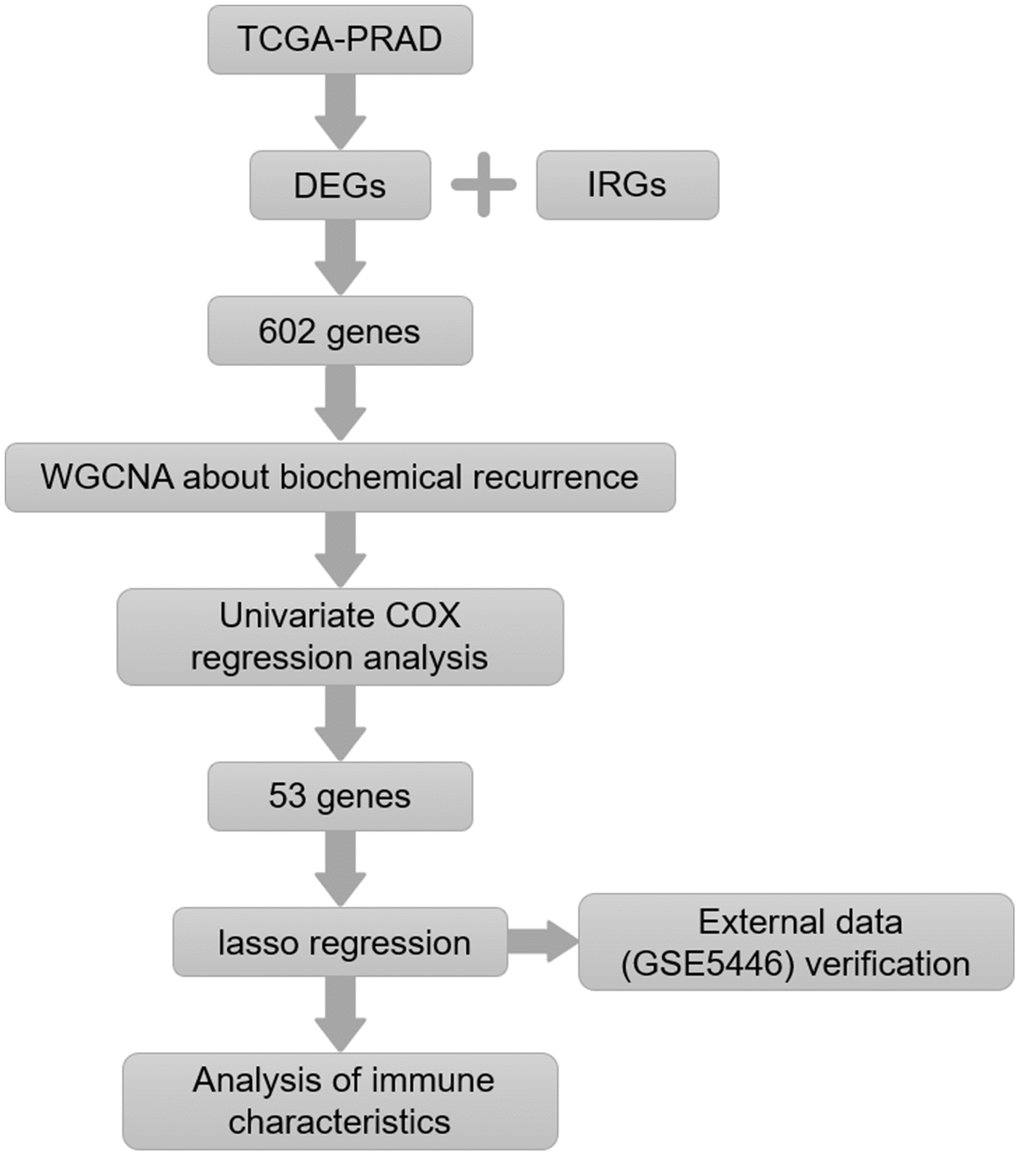 The TCGA database includes 5132 genes that are differentially expressed in prostate cancer compared to normal prostate tissue. Among them, 602 were immune-regulated genes (IRGs). Weighted correlation network analysis (WGCNA) was performed using these 602 candidate genes based on TCGA PRAD cancer sample expression profiles (Figure 2). Eight samples with abnormal clustering were removed during the screening process. The soft-thresholding power in the WGCNA (β=5) was determined based on scale-free R2 > 0.85 (Figure 3A). Eight modules were identified by average linkage hierarchical clustering based the soft-thresholding power (Figure 3B). According to the hierarchical clustering of modules, there were significant correlations between most modules (Figure 3C). A network heatmap of all genes is shown in Figure 3D. 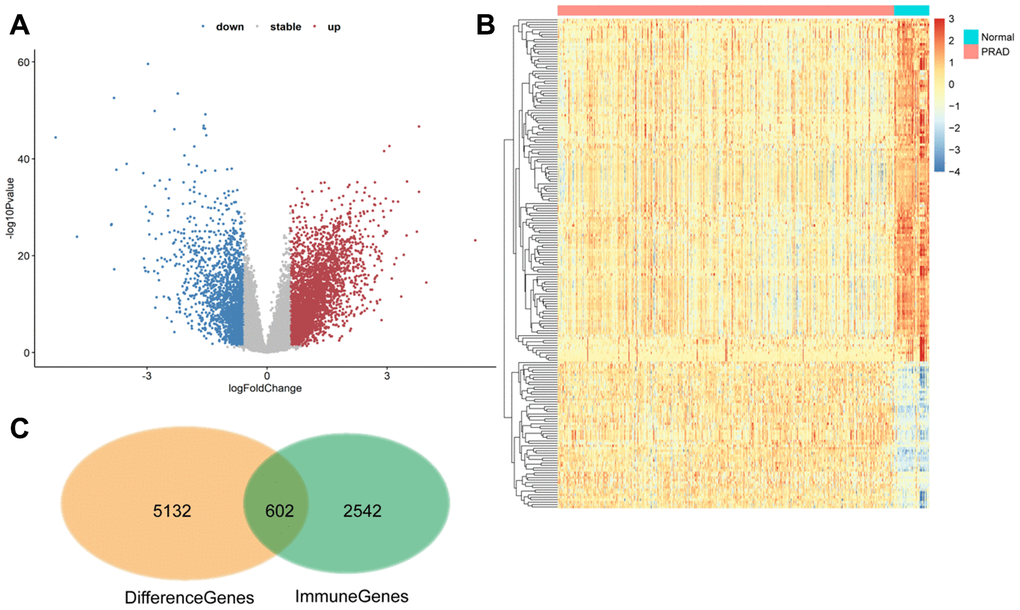 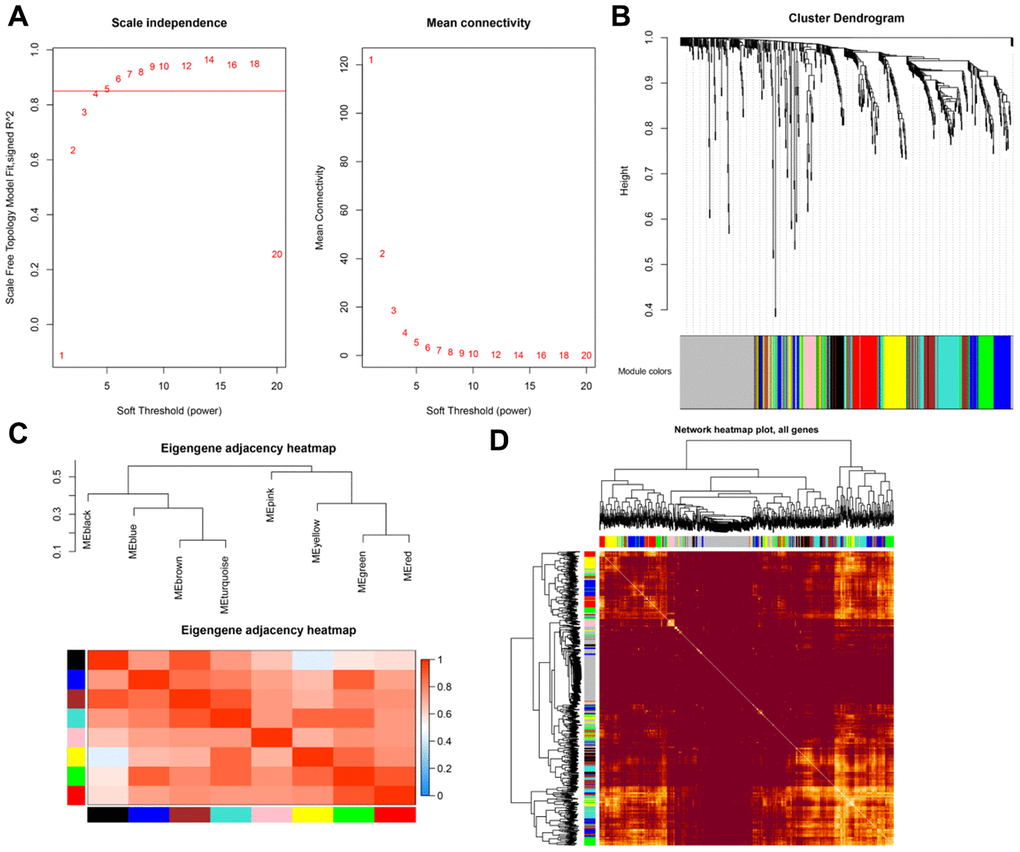 We analyzed associations between all modules and clinical characteristics of prostate cancer patients. The brown, turquoise, pink, and yellow modules were highly associated with time to BCR, and the pink and red modules were also associated with BCR (Figure 4). Further screening of the genes included in these modules revealed a correlation coefficients of greater than 0.1 between their expression and BCR in prostate cancer and of greater than 0.5 for gene expression correlations within the modules. In total, 221 immune-related genes were associated with BCR in prostate cancer (Supplementary Table 3). We then performed Cox univariate regression analysis to identify correlations between the above genes and BCR based on clinical information for prostate cancer patients in TCGA. A log-rank test revealed that 53 genes were associated with BCR in prostate cancer. Among these 53 genes, eight survival-associated IRGs (EDNRB, ANGPTL2, TNFSF15, TNFRSF10D, EDN2, BMP2, NLRP14, PLK1) were also identified using lasso regression analysis (Figure 5A, 5B). KM curves for PLK1, NLRP14, TNFRSF10D, and FGFR2 are shown in Figure 5C–5F; lasso regression coefficients for all eight IRGs are show in Table 1. 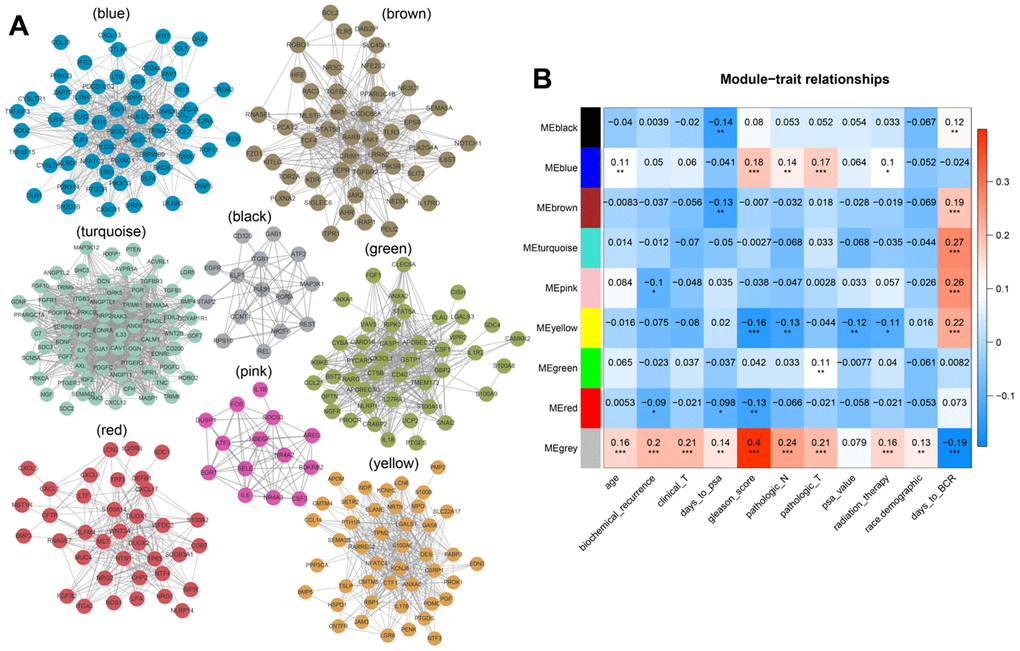 Figure 5. Construction of the IRG-based prognostic model. (A, B) The number of factors included in the model was determined through LASSO analysis. (C–F) KM curves for PLK1, NLRP14, TNFRSF10D, and FGFR2.

Immunogenetic risk score is associated with BCR in prostate cancer 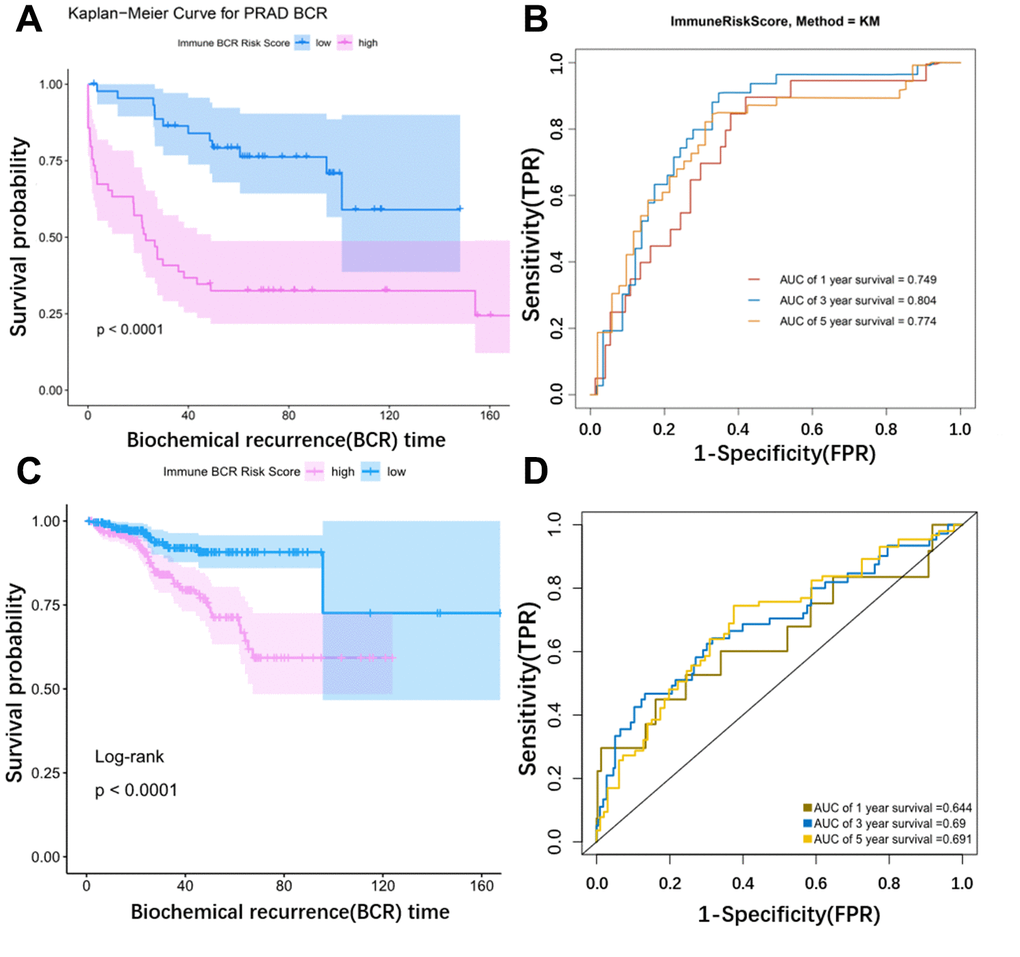 Differences in immune characteristics between high and low risk groups 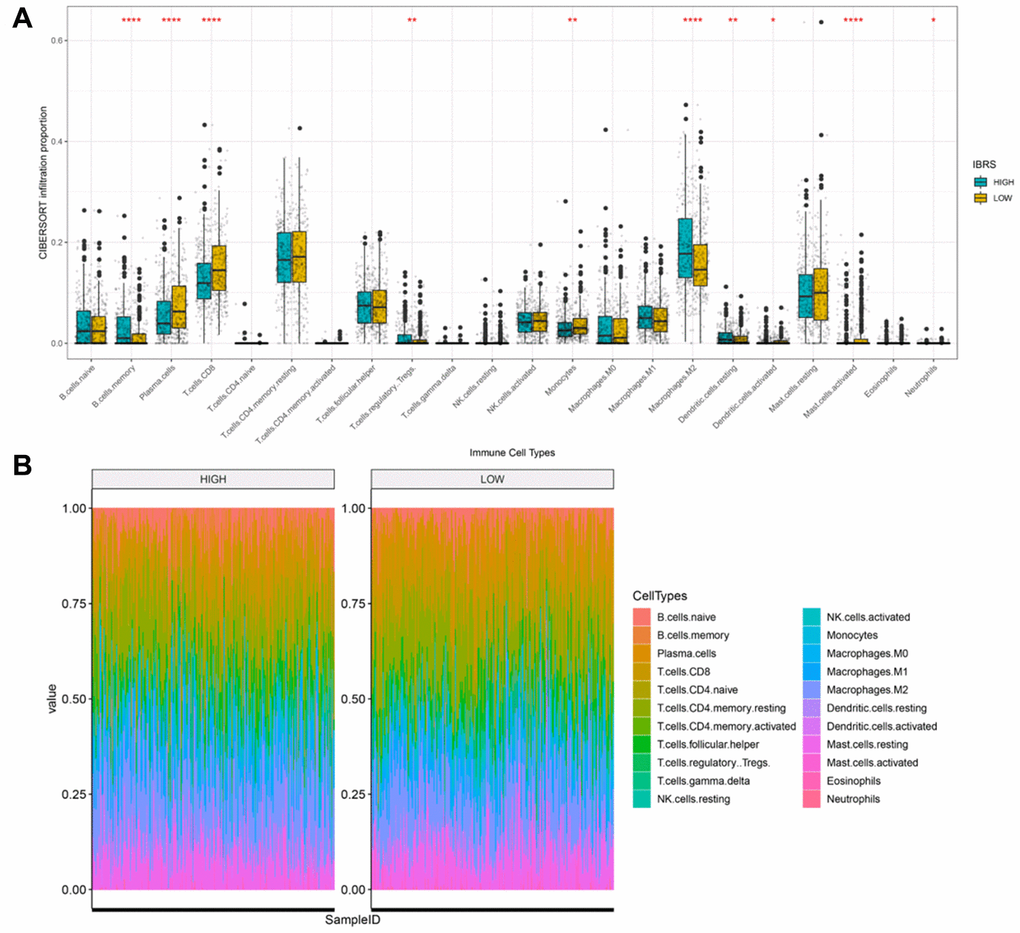 The LnCeVar database contains transcription factor regulation data validated in the literature. As shown in Figure 9, PLK1 is part of a rich regulation system. In a previous study, we found that infiltration of M2 macrophages promotes prostate cancer progression. Here, risk score was also associated with M2 macrophages. Among the genes included in the risk score, PLK1 had the largest coefficient, indicating that it may be the most critical factor in the model. We therefore performed double immunofluorescence labeling of CD163, a marker of M2 macrophages, and PLK1 in a prostate cancer tissue microarray (Figure 10A). PLK1 was positively correlated with CD163 in prostate cancer (Pca) samples (r=0.69, p<0.01), but not in benign prostatic hypertrophy (BPH) samples (r=0.12, p=0.63) (Figure 10B). Furthermore, PLK1 expression was significantly increased in prostate cancer compared to prostatic hyperplasia. (p=0.022) (Figure 10C). 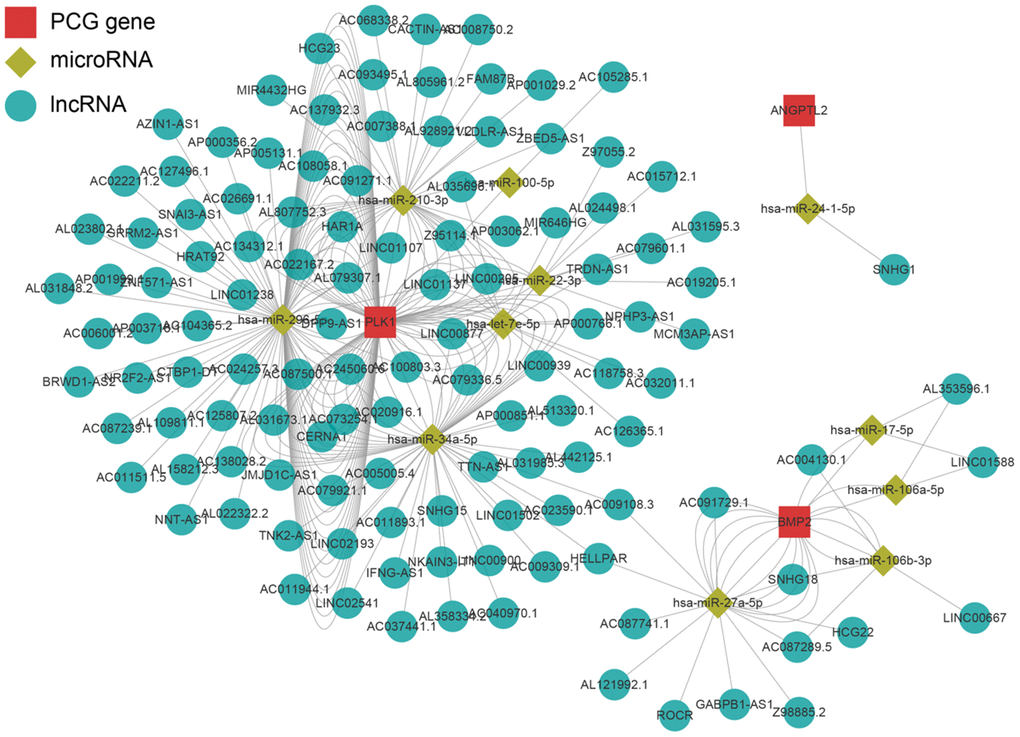 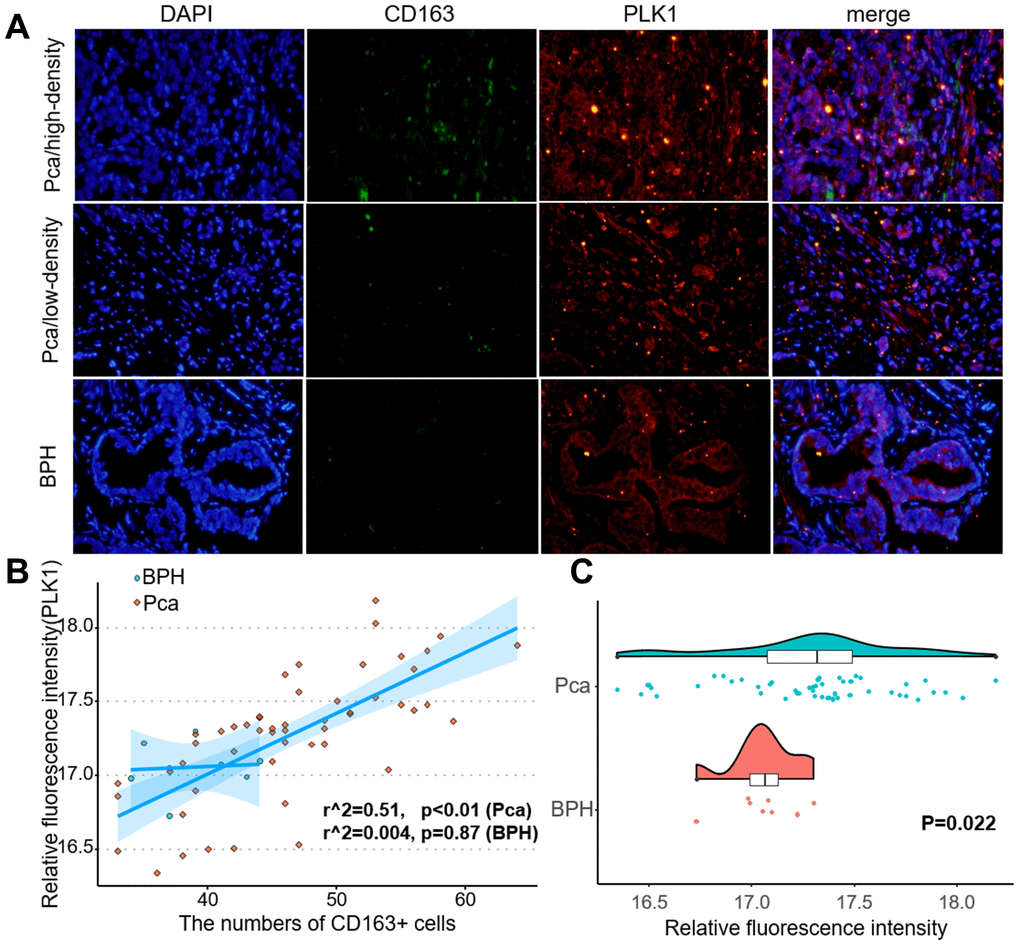 We found that 53 immune-related genes were associated with biochemical recurrence in prostate cancer. Among these, eight were identified as key genes by lasso regression. Validation with an external dataset indicated that the prediction model was highly accurate (5 year AUC=0.774). Moreover, biochemical recurrence occurred sooner and survival rates were lower in the high risk score group. Analysis of the LnCeVar database indicated that PLK1 had a particularly rich regulatory system in prostate cancer among the eight key genes.

Decreased expression of EDNRB, TNFSF15, TNFRSF10D, EDN2, and NLRP14, as well as increased expression of ANGPTL2, BMP2, and PLK1, were associated with higher risk scores; EDNRB promoter methylation status was also associated with risk score. A meta-analysis of 11 similar studies indicated that the frequency of EDNRB methylation was substantially higher in prostate cancer compared with normal prostate tissues (OR = 5.42, 95 % CI = 1.98–14.88, P = 0.001), suggesting that EDNRB promoter methylation might increase the risk of prostate cancer [11]. Here, TNFSF15 expression was inversely associated with prostate cancer risk. This is consistent with the role of TNFSF15 as a downstream effector of AMPK that inhibits prostate cancer growth [12]. TNFRSF10D expression is also associated with prostate cancer and with the direct p53 effectors and ERK signaling pathways; here, TNFRSF10D was inversely related to prostate cancer biochemical recurrence risk score. Endothelins are involved in the regulation of various physiological processes, including plumage development in chickens, pigmentation, neural crest cell proliferation, differentiation, migration, cardiovascular development and functions, and pulmonary hypertension [13]. The endothelin EDN2 was inversely associated with prostate cancer immunological risk score in our model. As a member of a family of molecules that belong to a signal-induced multiprotein complex termed the inflammasome that activates proinflammatory caspase-1 and caspase-5, NLRP14 may play a regulatory role in the innate immune system. NLRP14 is considered an oncogene, and increased expression of NLRP14 is associated with increases in prostate cancer mortality [14]. This contradicts the inverse association found here between NLRP14 and risk score, and further study is warranted. ANGPTL2 is a secreted glycoprotein with homology to angiopoietins that may exert autocrine or paracrine effects on endothelial cells. ANGPTL2 also promotes M2 polarization of macrophages in non-small cell lung cancer [15]. In addition, ANGPTL2 may promote acquisition of androgen independence and tumor progression in prostate cancer by exerting autocrine and/or paracrine effects via the integrin α5β1 receptor [16]. Here, we found a positive association between ANGPTL2 expression and immune-related risk score in prostate cancer. Finally, several studies suggest that BMP2 promotes progression and induces biochemical recurrence in prostate cancer [17–19], which is consistent with the positive association found here between BMP2 and risk score.

Genes that were differentially expressed between normal and prostate cancer samples were identified based on the screening criteria of p value > 0.05 and log(fold-change) > 1.5.

TCGA expression data for 602 immune-related genes was used for WGCNA (weighted gene co-expression network analysis) to identify associations between gene expression modules and clinical characteristics [30]. During sample clustering, eight samples with abnormal clustering were identified and removed from the analysis (Supplementary Figure 1). The co-expression network was then constructed and divided into modules. A scale-free network coefficient of greater than 0.85 was used to ensure that the co-expression network conformed to the scale-free network standards. Gene significance (GS) indicates the strength of linear correlations between the expression of different gene modules and clinical features. Modules with P≤0.01 and higher GS values were identified as survival-related modules and included in subsequent analysis.

The Survival package for R was used to perform univariate Cox regression and the KM test. The Glmnet package was used for lasso regression. Prognosis related genes were screen and correlation regression coefficients were obtained. The resulting risk score was validated in the GEO dataset (GSE54460). “TimeROC” was used to draw receiver operating characteristic curves (ROC), and the area under the curve (AUC) was calculated. Samples were divided between the high and low risk groups using the median risk score (RS) as a cutoff value. KM curves were used to evaluate the survival of prostate cancer patients.

The authors declare that there are no conflicts of interest regarding the publication of this paper.