Copyright: © 2020 Hu et al. This is an open access article distributed under the terms of the Creative Commons Attribution License (CC BY 3.0), which permits unrestricted use, distribution, and reproduction in any medium, provided the original author and source are credited.

Acute myeloid leukemia (AML) is a malignant cancer of the hematopoietic system, and is characterized by growth of hematopoietic cells located in the bone marrow (BM). It goes into the bloodstream and infiltrates various tissues and organs, leading to a series of clinical manifestations [1, 2]. AML is still the most frequently diagnosed malignant BM disease in adults, and accounts for approximately 80% of adult leukemia cases [3]. In spite of the developments in diagnosis and therapy, the 5-year overall survival (OS) among AML patients remains stubbornly low at approximately 30% [4, 5]. Thus, exploring the potential molecular mechanism of AML is crucial to improve the therapeutic effects.

With more advanced high-throughput sequencing technology and bioinformatics, multiple dysregulated circRNAs have been observed in multiple cancers, such as AML. For example, Shang et al. showed that circPAN3 facilitates drug resistance as an autophagy inducer via the AMPK/mTOR pathway in AML cells [14]. Sun et al. showed that circMYBL2 regulated FLT3 translation by enlisting PTBP1 to encourage FLT3-ITD in AML development [15]. Shang et al. found that circPAN3-mediated drug resistance in AML by regulating the miR-153-5p/miR-183-5p-XIAP pathway [16]. Although there have been many studies on circRNA in AML tumorigenesis and progression, the roles of circRNAs and the underlying mechanism are yet to be determined. 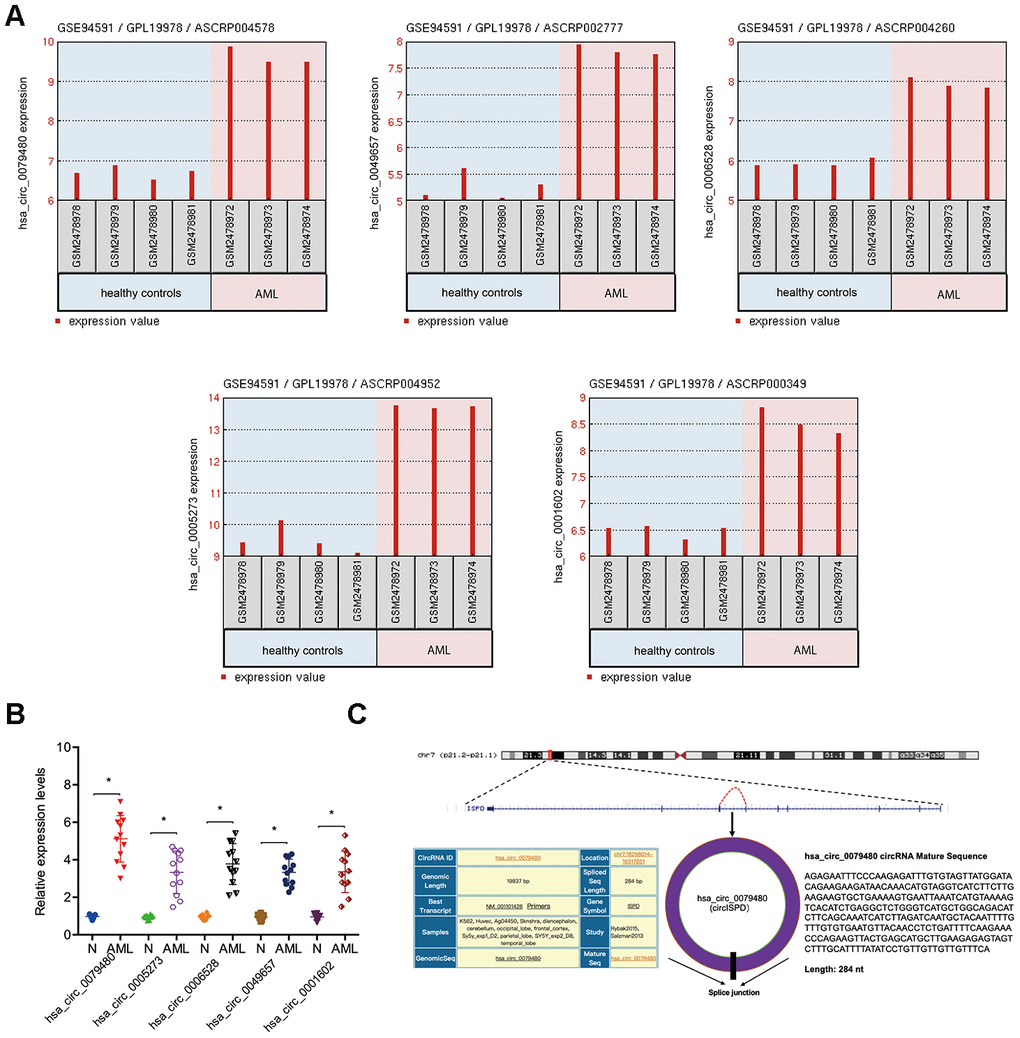 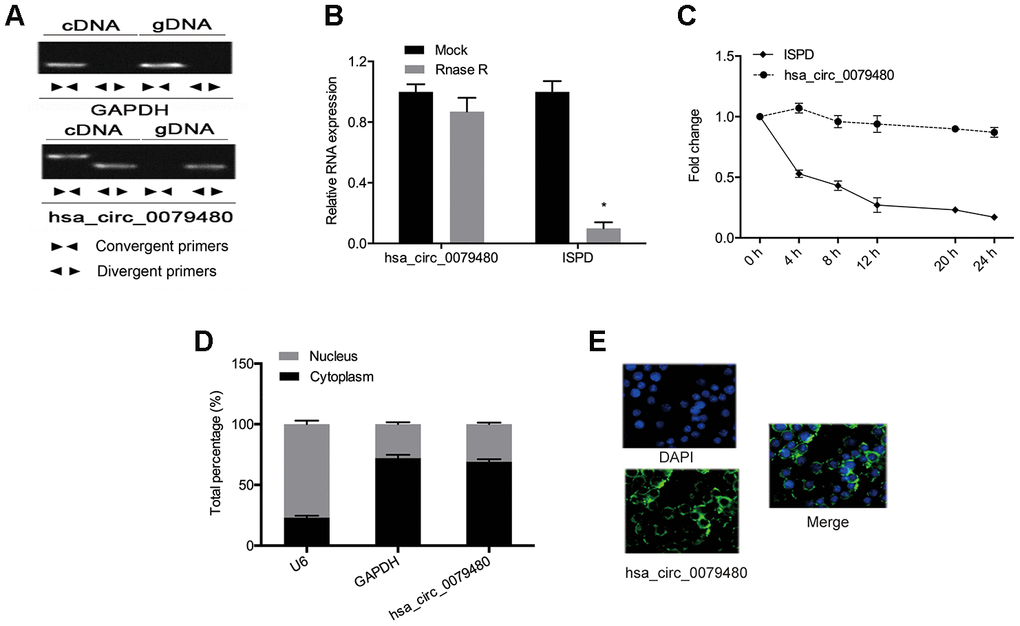 Loss-of-function experiments were performed by transfection of si-circ0079480 (si-circRNA) was into AML cells to identify the oncogenic role of hsa_circ_0079480 in AML. Additionally, qRT-PCR was carried out to identify the knockdown efficiency of si-circRNA (Figure 3A, 3B). CCK-8 assay demonstrated that viability of MOLM-13 and AML-193 cells was lower in si-circRNA knockdown group in comparison to the controls (si-NC) (Figure 3C, 3D). From flow cytometry assay we can see the AML cells apoptosis rate was markedly increased by hsa_circ_0079480 knockdown (Figure 3E, 3F). The data confirmed the tumor promoter functions of hsa_circ_0079480 in AML advancement. 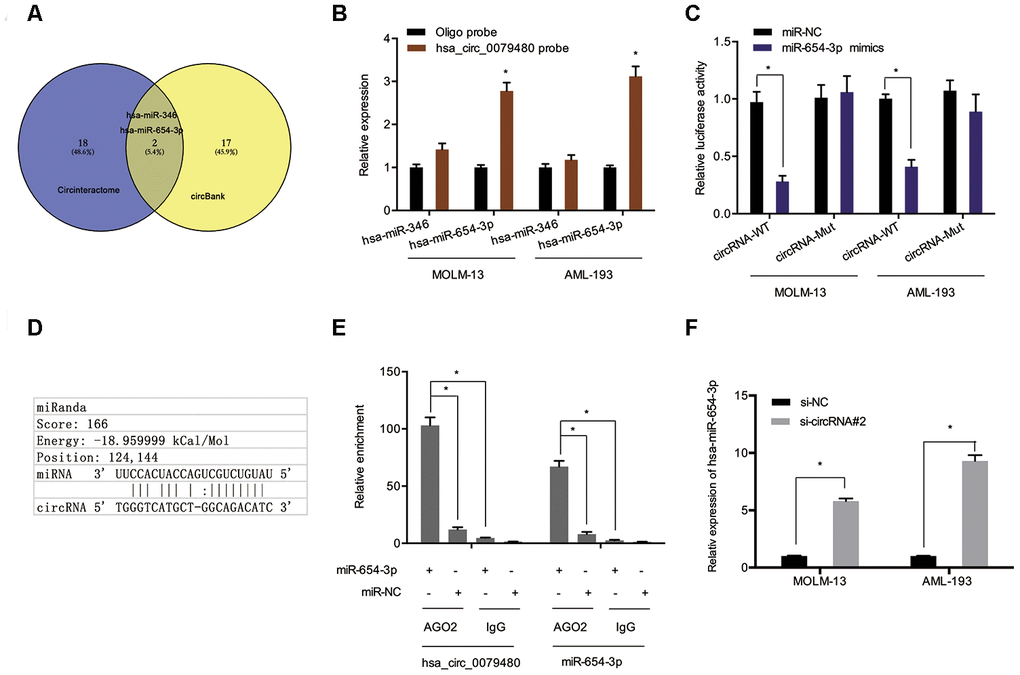 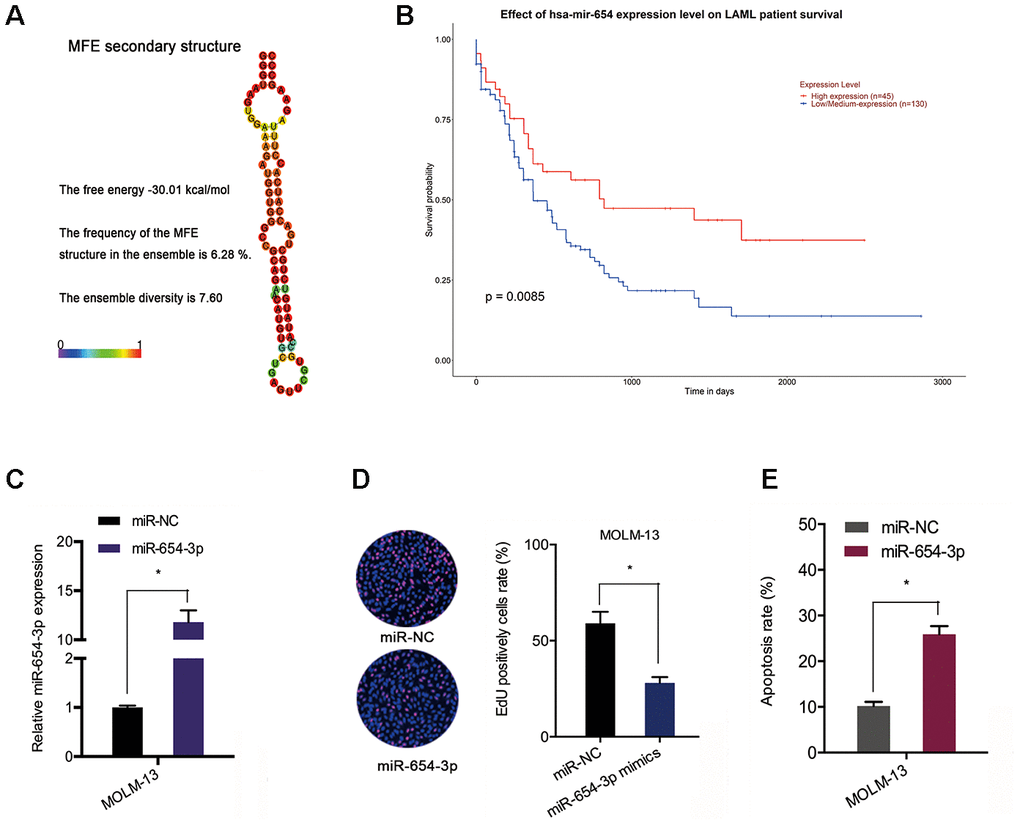 Bioinformatics analysis (miRTarBase; MicroT-CDS; miRDB [21–23]) was carried out to predict the miR-654-3p targets (Figure 6A). Among potential targets, we focused on HDGF (Figure 6B, 6C), which is known to be involved in tumorigenesis [24]. TCGA database demonstrated that HDGF levels were decreased in normal tissues and significantly increased in AML tissues (Figure 6D, 6E). High HDGF levels were related to poor OS rate in AML patients (Figure 6F). HDGF-Wt group activity was observed to be suppressed by miR-654-3p mimics through luciferase reporter assay (Figure 6G). What’s more, HDGF expression was also observed to be significantly inhibited by miR-654-3p mimics in AML cells (Figure 6H, 6I). Together, these data illustrated that miR-654-3p inversely modulated HDGF levels in AML. 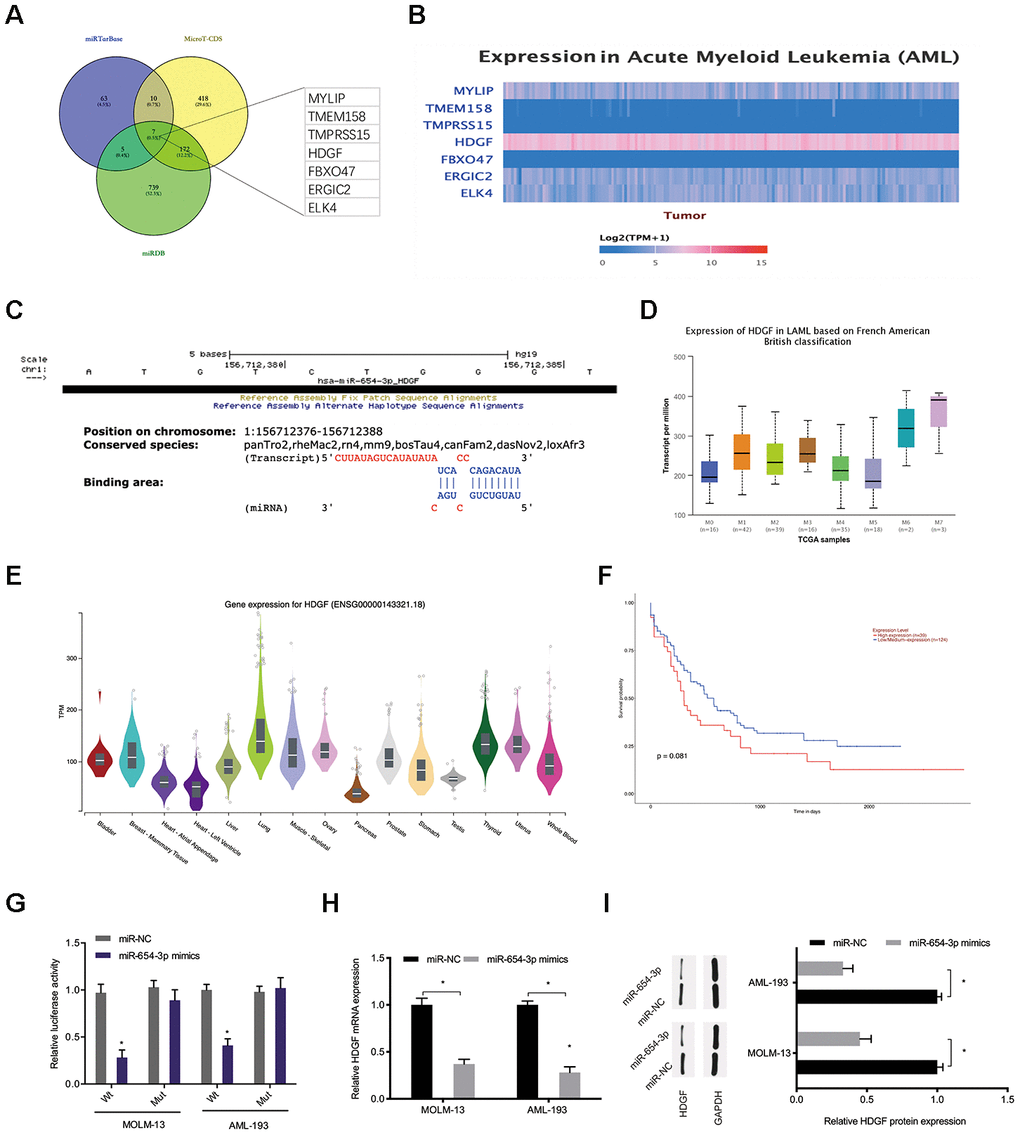 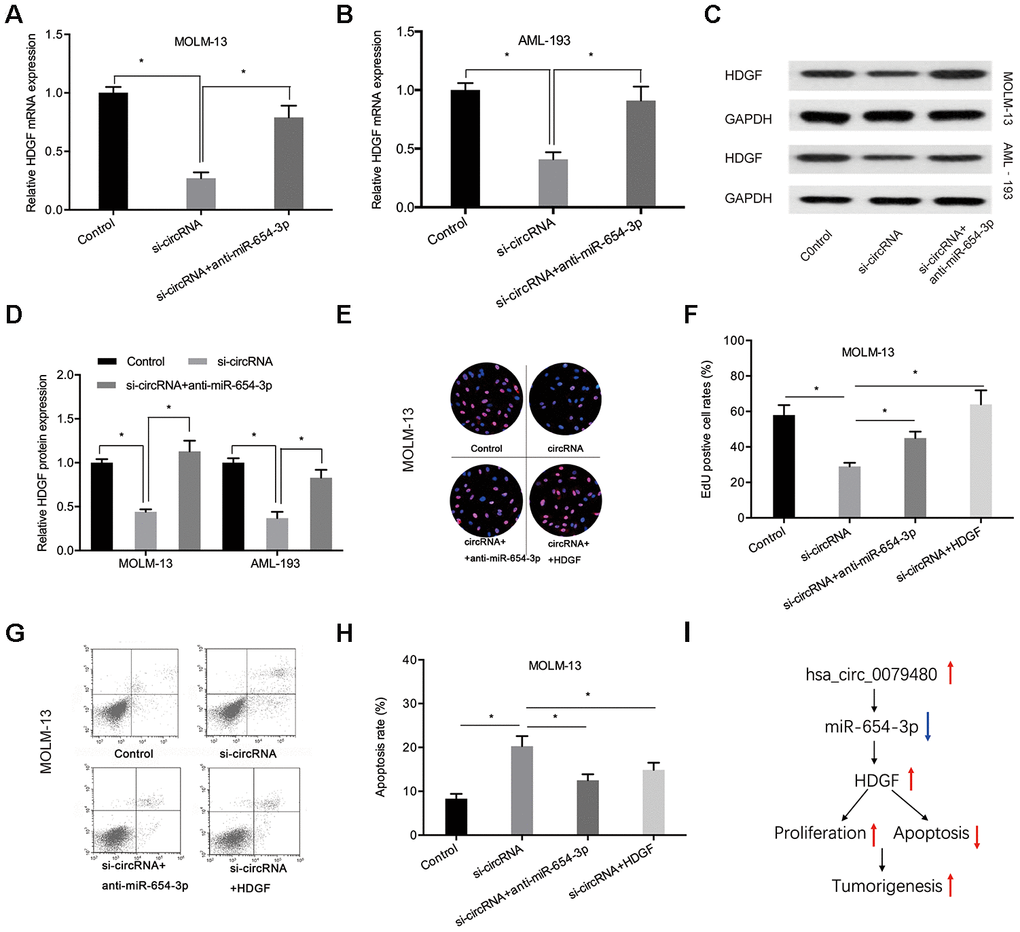 circRNA is an endogenous ncRNA that has attracted widespread attention owing to its unique loop structure, high stability, and conservation across evolution [25]. Accumulating data suggests that the dysregulated levels of circRNAs seen in AML exerted a crucial function in cancer progression and development. In this study, based on circRNA expression profile (GSE94591) analysis, a novel circRNA hsa_circ_0079480 was identified as being increased in AML. Herein, we identified that hsa_circ_0079480 was highly abundant and largely localized to the cytoplasm of circRNA molecules. Furthermore, hsa_circ_0079480 level was upregulated in BM samples obtained from AML patients. Remarkably, hsa_circ_0079480 inhibition was found to reduce advancement of AML by alleviating cell proliferation and stimulating cellular apoptosis.

An increasing number of studies demonstrated the interaction between circRNAs and miRNA, therefore regulating downstream target genes, which is a common method to regulate tumorigenesis [26, 27]. In this analysis, we predicted miRNA targets of hsa_circ_0079480 using Circular RNA Interactome and circBank tools. Among possible targets, we chose miR-654-3p for additional analysis due to their anti-tumor characteristics. For example, Yang et al. showed that miR-654-3p is reduced in liver cancer and hinders tumor cell growth and invasion in vitro [28]. Duan et al. demonstrated that lncRNA EMX2OS encouraged the progression of ovarian cancer cells by targeting the miR-654-3p/AKT3/PD-L1 pathway [29]. Jin et al. demonstrated that circRNA circHIPK3 is a prognostic biomarker in glioma development by modulating the miR-654/IGF2BP3 axis [30].

Herein, we also identified that miR-654-3p was decreased in AML, and low expression was linked to poor disease outcomes. Next, functional assays showed that miR-654-3p mimics suppressed growth and induced apoptosis of AML cells. Moreover, luciferase reporter and RIP assays further demonstrated that hsa_circ_0079480 could directly interact with miR-654-3p in AML. Thus, we demonstrated that hsa_circ_0079480 may have a role as a sponge of miR-654-3p in AML development.

HDGF, heparin-binding nuclear growth factor, was obtained from conditioned media of the hepatoma cell line Huh-7 [31]. Recently, some studies have demonstrated that HDGF serves an oncogenic function in many cancer types. For instance, Zhang et al. showed that high HDGF promoted bladder cancer cell development by stimulating the PI3K-AKT signaling axis [32]. Zheng et al. indicated that lncRNA AGAP2-AS1 promotes glioma cell progression by regulating the miR-15a/b-5p/HDGF/Wnt/β-catenin axis [33]. Though, the function of HDGF in AML remains unknown. In this analysis, we demonstrated that high HDGF expression in AML was related to poor OS in patients. Next, bioinformatics analysis suggested that HDGF serves as a possible target of miR-654-3p, and the binding between the two molecules was further confirmed by luciferase reporter assay. We also discovered that HDGF levels were inhibited after hsa_circ_0079480 silencing, and miR-654-3p inhibition rescued HDGF expression. Furthermore, functional rescue assays showed that the influence on cell viability and apoptosis stimulated by si-circ0079480 were hindered by miR-654-3p inhibition or HDGF overexpression. This information showed that hsa_circ_0079480 modulated AML cell development by regulating the miR-654-3p/HDGF pathway.

In summary, this analysis validated that hsa_circ_0079480 was highly expressed in AML, which promoted cell proliferation by upregulating HDGF expression via sponging miR-654-3p. Thus, the current findings provided an in-depth understanding of the basic research of circRNA intervention in AML in order to identify a new target for AML therapy.

Bone marrow (BM) samples from 12 AML patients were included in this analysis. Among the 12 samples, 7 were from patients with idiopathic thrombocytopenic purpura (ITP), which were regarded as negative controls (N). All tissues were acquired from The First People’s Hospital of Shangqiu. All participants in the present study provided informed consent, and the study was granted approval by ethics committee of the hospital.

siRNA that target hsa_circ_0079480 (si-circRNA), miR-654-3p mimics, miR-654-3p inhibitors, and negative controls [17] were acquired through GenePharma (Shanghai, China). The transfection was conducted through the use of Lipofectamine 2000 (Invitrogen, Carlsbad, CA, USA) as per established guidelines.

The FITC-labeled hsa_circ_0079480 probes were designed and produced by Geneseed Biotechnology (Guangzhou, China). AML cells were grown on round coverslips, fixed, permeabilized in phosphate-buffered saline (PBS) with 0.5% Triton X-100, and dehydrated in ethanol. The FISH probes were diluted (1:50), denatured, balanced, and added to cells at 37° C overnight. After hybridization, the cells were labelled using DAPI-antifade for 10 min at room temperature. Finally, slides were sealed using rubber cement, placed in the dark for more than 20 min, and detected using a Leica microscope (Leica DM6000B, Switzerland).

EdU assays were conducted utilizing a Cell-Light EdU DNA Cell Proliferation Kit (RiboBio, Guangzhou, China). Cells were then added into 96-well plates and treated with EdU for 2 h, followed by PBS washes and labelling with Apollo for 30 min. Subsequently, cells were fixed in 4% paraformaldehyde and labelled with DAPI (100 μL, 10 min). The images were taken using a fluorescence microscope (Olympus).

The relationship among hsa_circ_0079480 and miR-654-3p was assessed utilizing RIP assay through the EZ-Magna RIP kit (Millipore, Billerica, MA, USA), as per published instructions [18].

Data was assessed by GraphPad Prism 6.0 and SPSS 21.0 software, and represented as mean ± SD of three individual experiments. Additionally, student’s t-test or one-way ANOVA was utilized to assess any variation among different groups. P-value < 0.05 represents significance.

The authors declared no conflicts of interest.