Copyright: © 2020 Zhou et al. This is an open access article distributed under the terms of the Creative Commons Attribution License (CC BY 3.0), which permits unrestricted use, distribution, and reproduction in any medium, provided the original author and source are credited.

The miR-17-92 cluster (miR-17, miR-18a, miR-19a, miR-20a, miR-19b-1 and miR-92a) contributes to the occurrence and development of various diseases by inhibiting multiple target genes. Here, we explored the effects of miR-18a on insulin sensitivity. Quantitative real-time PCR indicated that serum miR-18a levels were lower in type 2 diabetes mellitus patients than in healthy controls, suggesting that miR-18a may influence blood glucose levels. Global overexpression of miR-18a in transgenic mice increased their glucose tolerance and insulin sensitivity, while it reduced expression of the phosphatase and tensin homolog deleted on chromosome ten (PTEN) in their skeletal muscle and adipose tissue. Western blotting indicated that overexpressing miR-18a in 3T3-L1 and C2C12 cells enhanced insulin-stimulated AKT phosphorylation and suppressed PTEN expression, while inhibiting miR-18a had the opposite effects. These results suggest that miR-18a improves insulin sensitivity by downregulating PTEN. This makes miR-18a a potentially useful target for the treatment of diabetes mellitus in the future.

Across the world, type 2 diabetes mellitus (T2DM) is a prevalent chronic disease [1] that seriously threatens human health [2]. The critical contributors to the pathogenesis of T2DM include insulin resistance (which impairs glucose disposal in skeletal muscle, adipocytes and the liver), inactivity, increasing obesity rates and advancing age [3]. However, the pathogenesis of T2DM is not fully understood.

microRNAs (miRNAs) influence the sensitivity of tissues to insulin, the activity of pancreatic β-cells, the development of the pancreas and the pathogenesis of T2DM [4–6]. For instance, miR-103/miR-107, miR-802 and miR-143 have been demonstrated to reduce insulin sensitivity in mice [7–9]. In addition, miR-375 and miR-9 have been shown to reduces insulin secretion, and miR-34a and miR-375 are involved in the development of pancreas [10–12]. However, further research is needed to determine how miRNAs alter blood glucose levels, and to identify miRNAs that promote insulin sensitivity and glucose metabolism, in order to discover potential therapeutic targets for T2DM.

The polycistronic miR-17-92 cluster includes six miRNAs—miR-17, miR-18a, miR-19a, miR-19b-1, miR-20a and miR-92a—and regulates multiple cellular processes that are involved in proliferation, oncogenesis, differentiation, angiogenesis, survival and blood glucose control [13, 14]. The miRNAs in this cluster can work independently or cooperatively to influence the occurrence, development and prognosis of various diseases; for example, miR-19 has been confirmed to drive the tumorigenicity of the miR-17-92 cluster in MYC-induced B-cell lymphoma [15]. However, the involvement of miR-18a in blood glucose regulation is not clear.

Phosphatase and tensin homolog deleted on chromosome ten (PTEN), a well-known tumor suppressor and major inhibitor of the phosphoinositide 3-kinase (PI3K)/AKT pathway, has also been reported to be an important regulator of glucose and lipid metabolism. Although PTEN deficiency induces multiple forms of cancer, it can also trigger a series of metabolic alterations that effectively enhance insulin sensitivity. Moreover, several studies have demonstrated that PTEN polymorphisms are associated with insulin resistance [16–18].

In the present study, we assessed serum miR-18a levels in T2DM patients, and examined the effects of miR-18a on PTEN expression and insulin sensitivity.

Downregulation of miR-18a in serum from T2DM patients 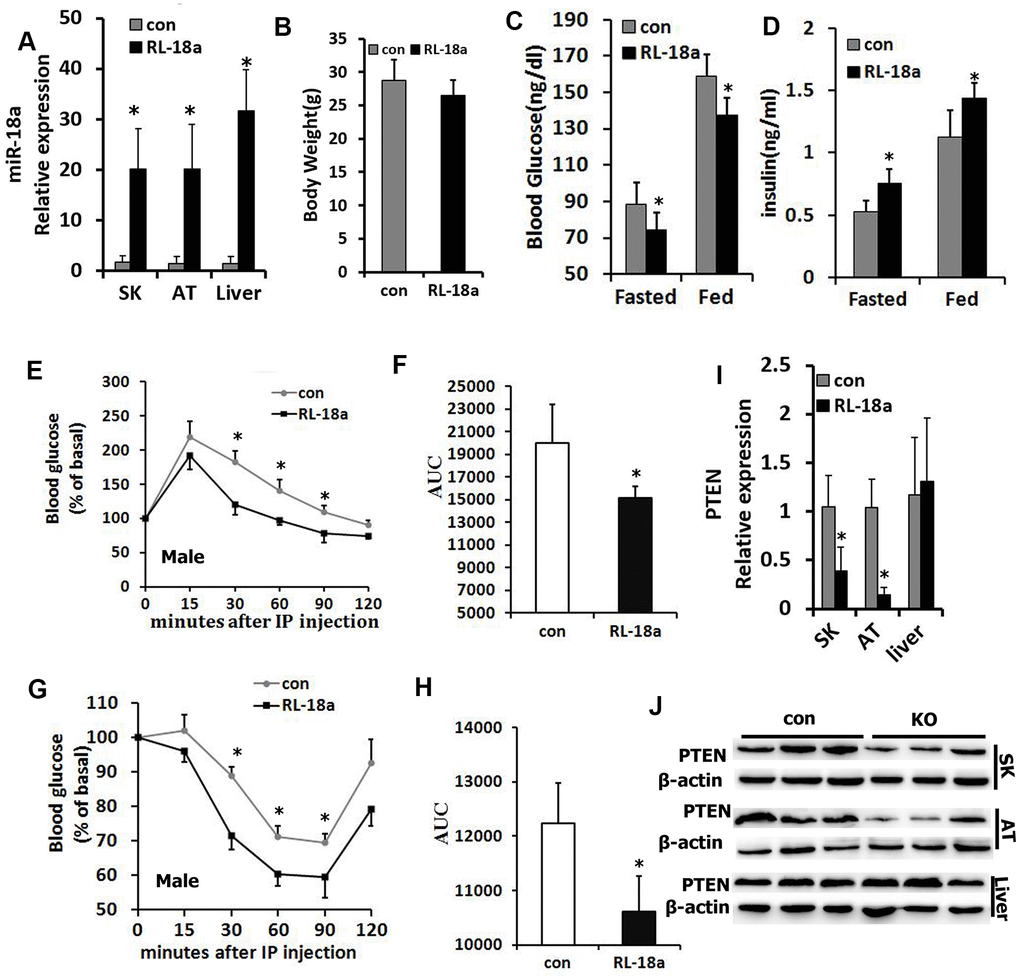 PTEN is a known negative regulator of insulin sensitivity [21]; thus, we used qRT-PCR (Figure 2I) and Western blotting (Figure 2J) to analyze PTEN expression in skeletal muscle, adipose tissue and liver samples from male RL-18a mice. As expected, PTEN levels in skeletal muscle and adipose tissue were lower in RL-18a mice than in control mice; however, there were no obvious changes in PTEN levels in the liver.

Insulin activity and sensitivity depend on PI3K-AKT pathway activation [22]. To further investigate the function of miR-18a in insulin target cells, we transiently transfected 3T3-L1 preadipocytes and C2C12 myoblasts with miR-18a mimics or inhibitors (‘anti-miR-18a’). The upregulation and inhibition of miR-18a expression in these cells was confirmed using qRT-PCR (Figure 3A, 3B). Western blotting indicated that the insulin-induced phosphorylation of AKT increased in 3T3-L1 and C2C12 cells transfected with miR-18a mimics (Figure 3C, 3D) but decreased in 3T3-L1 and C2C12 cells transfected with miR-18a inhibitors (Figure 3E, 3F). These results verified that miR-18a can enhance insulin sensitivity. 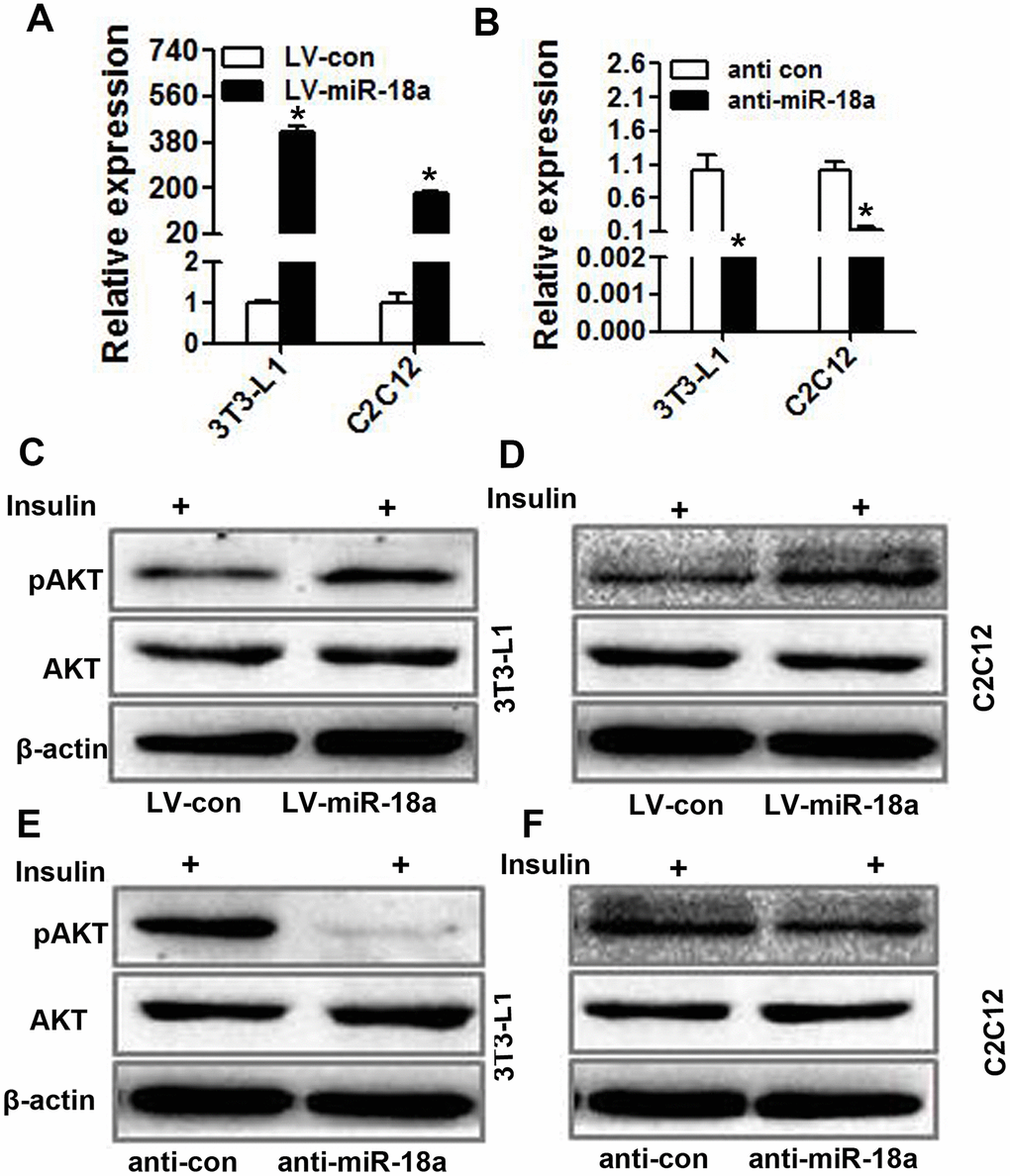 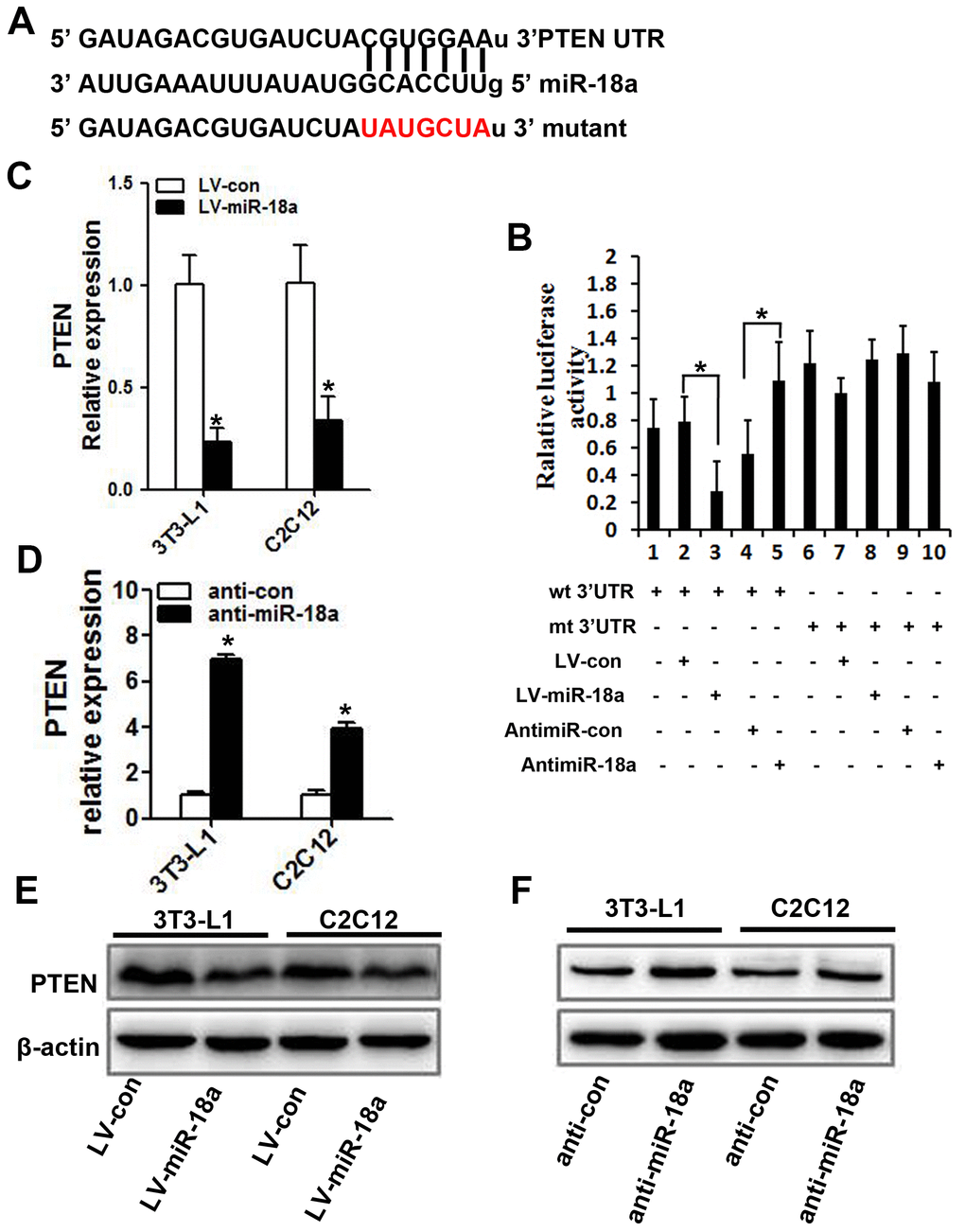 Overexpression of PTEN reverses the miR-18a-induced phosphorylation of AKT

Previous studies have shown that the miR-17-92 cluster of genes is involved in embryo differentiation, is widely expressed in lymph, breast, liver, testis, intestinal, pancreatic and other tissues, and is upregulated in some tumor tissues [27, 28]. In addition, recent studies have indicated that miR-17-92 may regulate blood glucose levels [29, 30]. The miR-17-92 gene cluster includes six components—miR-17, miR-18a, miR-19a, miR-20a, miR-19b-1 and miR-92a—some of which are involved in the pathogenesis of diabetes. For example, miR-19b-1 can inhibit NeuroD1 expression, ultimately downregulating insulin 1 expression [31]. MiR-17, miR-20a and miR-92-1 levels were found to be reduced in diabetic heart disease [32]. While poor adipocyte differentiation promotes insulin resistance, the miR-17-92 gene cluster can significantly accelerate the differentiation of adipocyte precursor cells [33]. These results indicate that the miR-17-92 gene cluster may be associated with diabetes and islet cell function; however, the clinical significance and function of each component need to be further studied. Since little research has examined the effects of miR-18a on glucose metabolism, we selected this miRNA as the focus of our study.

The target tissues of insulin are skeletal muscle, adipose tissue and liver; thus, we measured the expression of PTEN in these tissues. However, in our analyses of RL-18a mice, we did not find that PTEN was a target of miR-18a in the liver. To elucidate the mechanism responsible for insulin sensitization in insulin target cells, we performed in vitro studies in 3T3-L1, C2C12 and HepG2 cells. These results suggested that miR-18a does not improve insulin sensitivity by inhibiting PTEN in the liver. Previous research has shown that one miRNA may have several target genes, while several miRNAs can inhibit a particular mRNA [34], contributing to the complexity of post-transcriptional regulation [35, 36]. Therefore, we speculate that other miRNAs inhibit PTEN in the liver. Moreover, in view of the tissue specificity of certain miRNAs [37], we postulate that miR-18a does not function in the liver. In addition, the miR-17-92 cluster and the paralogous miR-106b-25 cluster have been shown to cooperate during embryonic development [38] and to inhibit some of the same mRNAs [14]. Therefore, the component miRNAs of these two gene clusters may also cooperate in the liver. However, further experiments are needed to determine why miR-18a did not alter insulin sensitivity in the liver by inhibiting PTEN.

In conclusion, miR-18a enhanced insulin sensitivity by inhibiting PTEN in 3T3-L1 and C2C12 cells. Given that the downregulation of PTEN is known to increase insulin sensitivity [18, 39], miR-18a overexpression may be a beneficial strategy to restore insulin function in patients with T2DM.

Wild-type FVB/N mice and homozygous EIIa-Cre transgenic mice (FVB/N-Tg (EIIa-Cre) C5379Lmgd/J) were purchased from the Model Animal Research Center of Nanjing University. miR-18a was overexpressed in RL-18a transgenic mice using a Cre/loxP system on a C57BL/6 background, as reported previously [40]. All procedures involving animals adhered to the Guide for the Care and Use of Laboratory Animals of Wenzhou Medical University. The mice were anesthetized with sodium pentobarbital during all surgeries, and the suffering of the animals was minimized.

Samples were collected from the Department of Endocrinology of the Second Affiliated Hospital of Guangzhou Medical University. The Hospital Ethics Committee of the Second Affiliated Hospital of Guangzhou Medical University approved this study. Serum samples from healthy subjects (n=44) and patients with a new diagnosis of T2DM (n=49) were analyzed using qRT-PCR. T2DM was diagnosed based on the diagnostic standards of the World Health Organization [41]. The healthy subjects had no familial diabetes history, and their fasting plasma glucose levels were <6.1 mM, while their two-hour post-load plasma glucose concentrations after a 75-g oral glucose tolerance test were <7.8 mM. Clinical data for the patients and controls are shown in Supplementary Table 1.

The miRNAs in serum samples from T2DM patients and healthy controls were extracted using a microRNA RNeasy Mini Kit (Exiqon) according to the vendor’s instructions; the product information is listed in Supplementary Table 2. Trizol, an iScript cDNA synthesis kit and a SYBR PrimeScript miRNA RT-PCR Kit were obtained from TaKaRa Bio. RNA was isolated, reverse transcribed into cDNA and assessed via qRT-PCR in accordance with the manufacturer’s protocols and our prior publication [42]. The primers used to amplify PTEN (Invitrogen, Shanghai, China) were: 5’-TGGCATTTGCTGAACGCATTT-3’ (forward) and 5’- TGCAGCCAGGTCTAATTGTTTT-3’ (reverse). Other primers are reported in Supplementary Table 2. The results were calculated using the relative quantification protocol (2-ΔΔCt).

The Western blotting procedures were detailed in our previous report [42]. The antibodies used in this study are shown in Supplementary Table 3.

A dual-luciferase reporter assay kit was obtained from Promega Corporation (USA). The experiments were performed according to the manufacturer’s directions and a previous report [43].

Data were analyzed with SPSS 18.0 software. All data are shown as the mean ± standard deviation (SD). Values were deemed statistically significant at *P<0.05.