Copyright: © 2021 Tian et al. This is an open access article distributed under the terms of the Creative Commons Attribution License (CC BY 3.0), which permits unrestricted use, distribution, and reproduction in any medium, provided the original author and source are credited.

Lung cancer is the leading cause of cancer-related deaths in the world [1]. In China, an estimated 733,300 new lung cancer cases and 610,200 lung cancer deaths were recorded in 2015 [2]. Lung adenocarcinoma is a complicated subtype of lung cancer [3]. Numerous studies have explored the molecular mechanisms of this cancer [4–6]. In our study, we investigated its pathomechanism to provide reliable diagnostic and therapeutic biomarkers in lung adenocarcinoma.

AMOTL2 is a member of Amot family [7] which could interfere cells polarity to promote the migration ability [8]. The results show that AMOTL2 plays a vital role in migration of endothelial cells [9]. AMOTL2 functions as an oncogene or anti-oncogene in different human tumors. For instance, AMTOL2 induces the angiogenesis of pancreatic cancer through UCA1/miR-96-5p/AMOTL2 axis [10]. mTORC2/AMOTL2/YAP axis promotes the proliferation and invasiveness of glioblastoma cells [11]. However, in breast cancer, high expression level of AMOTL2 was significantly negative correlated with clinical grade [12]. In non-small cell lung cancer, AMOTL2 functioned as negative regulator of tumor cells proliferation via AMOTL2/PPP2R2A/JUN axis [13]. Thus, it is urgent to explore the detailed biological mechanism of AMOTL2 in lung adenocarcinoma.

In this study, we constructed a WGCNA co-expression network to identify the key exosomal miRNA. Moreover, we explored that exosomal miR-149-5p accelerated growth and suppressed apoptosis of tumor cells via inhibiting AMOTL2.

Normalized data for each group in GSE111803 was showed in Figure 1A. The result plotted the similar expression distribution in each group. According to the criterion of adjusted p<0.05 and |log2FC|>2, a total of 559 miRNAs were identified. Among them, 36 significantly expressed exosomal miRNAs were displayed in the heat map (Figure 1B). 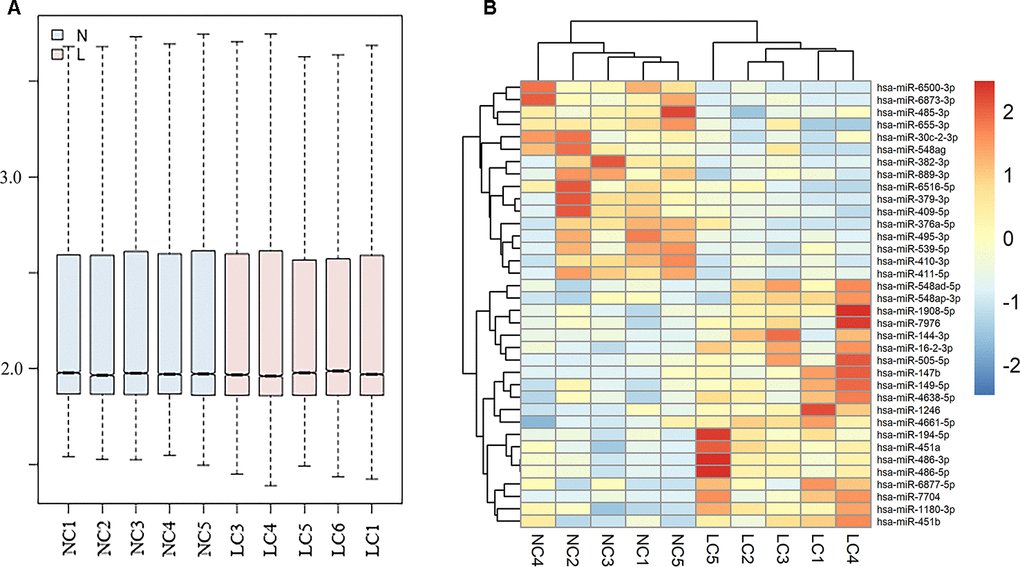 The power of β=12 was chosen as the soft thresholding power value when the scale free R2=0.95 (Figure 2A). A total of 10 modules were identified (Figure 2B). Each module had different numbers of exosomal miRNAs (Table 1). The modules were highly independent of each other (Figure 2C). In addition, to explore co-expression similarity of each module, we calculated the eigengenes based on their correlation (Figure 2D). These ten modules yielded two main clusters; one contained six modules, while the other contained four modules. The heatmap plot of the adjacencies also supported this result (Figure 2E). Furthermore, we explored the relation between ten modules and lung adenocarcinoma (Table 2). The results showed that the turquoise module had the strongest connection (P<0.001) with NSCLC (hsa05223). In turquoise module, we found that the function of exosomal miR-149-5p in lung adenocarcinoma remained unclear. Thus, we investigated the role of exosomal miR-149-5p for the following experiment. 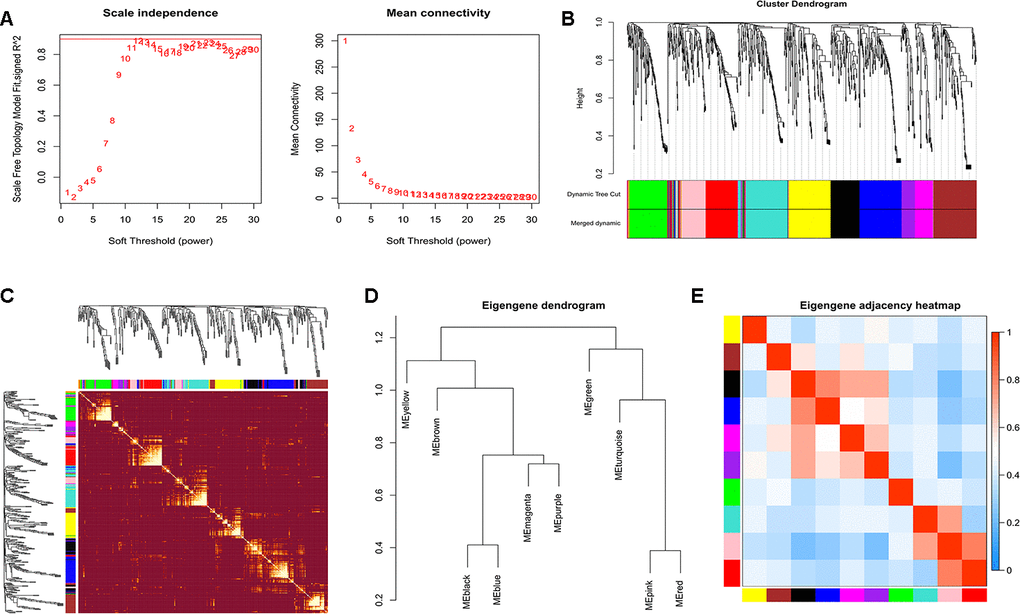 Table 1. Numbers of exosomal miRNAs in each module.

Table 2. Pathways of exosomal miRNAs in each module.

Firstly, we found the upregulation of exosomal miR-149-5p in peripheral serum of lung adenocarcinoma patients in GSE111803 (Figure 3A). Then we isolated exosomes from conditioned media and identified the cup-shaped structure and size by electron microscopy (Figure 3B). In addition, we detected the known exosome biomarkers, CD63 and TSG101 (Figure 3C). The results verified that the isolated particles were exosomes. 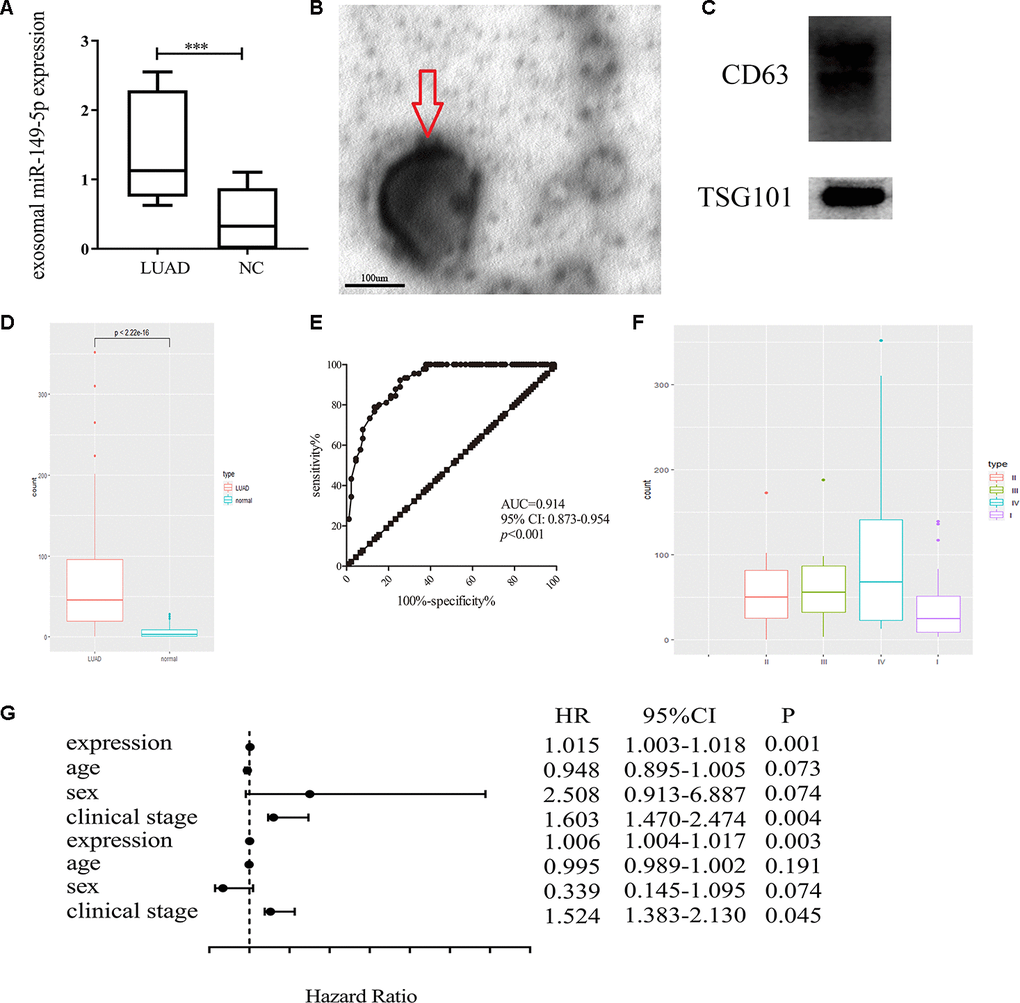 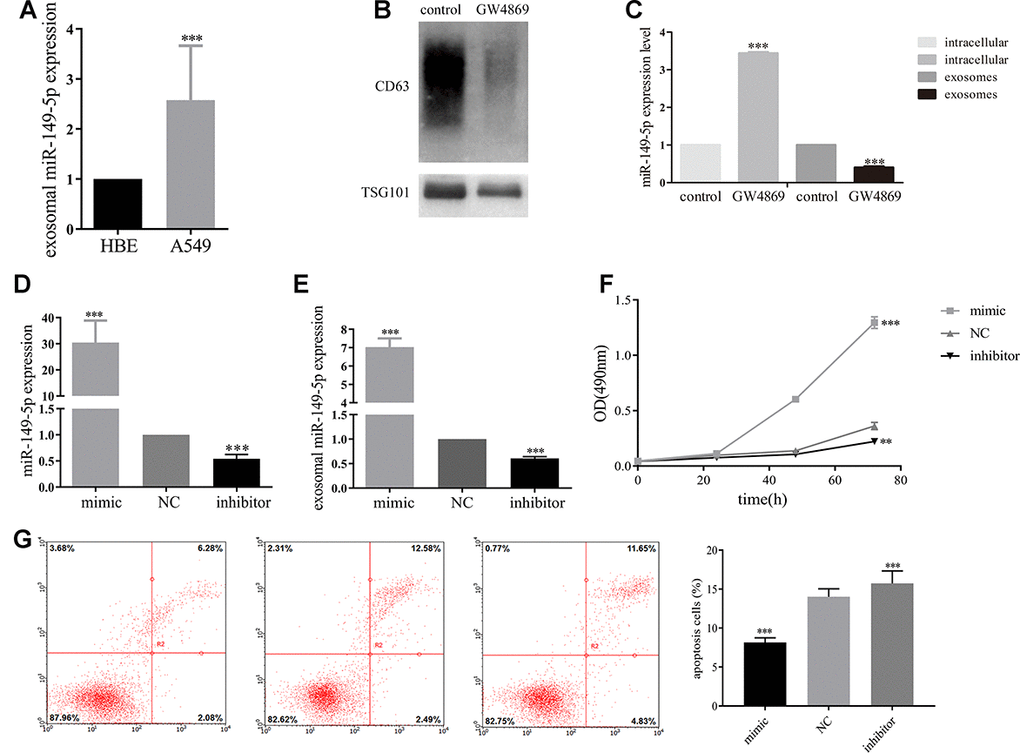 We summarized the target genes from Targetscan, miRWalk, miRDB and miRDIP bioinformatic websites and a total of 17 common genes were identified (Figure 5A). We observed that 8 target genes, AMOTL2, BCL2L2, CACHD1, MSRB3, NFIB, S1PR2, SORT1 and SRF, were significantly down-regulated in lung adenocarcinoma (Figure 5B). Results from THPA data also revealed the decreased expression of those genes (Figure 6A–6H) in lung adenocarcinoma tissues.

Figure 5. Identification of target genes of exosomal miR-149-5p. (A) Venn map of common target genes. (B) The expression profile of 8 target genes in TCGA-LUAD cohort. 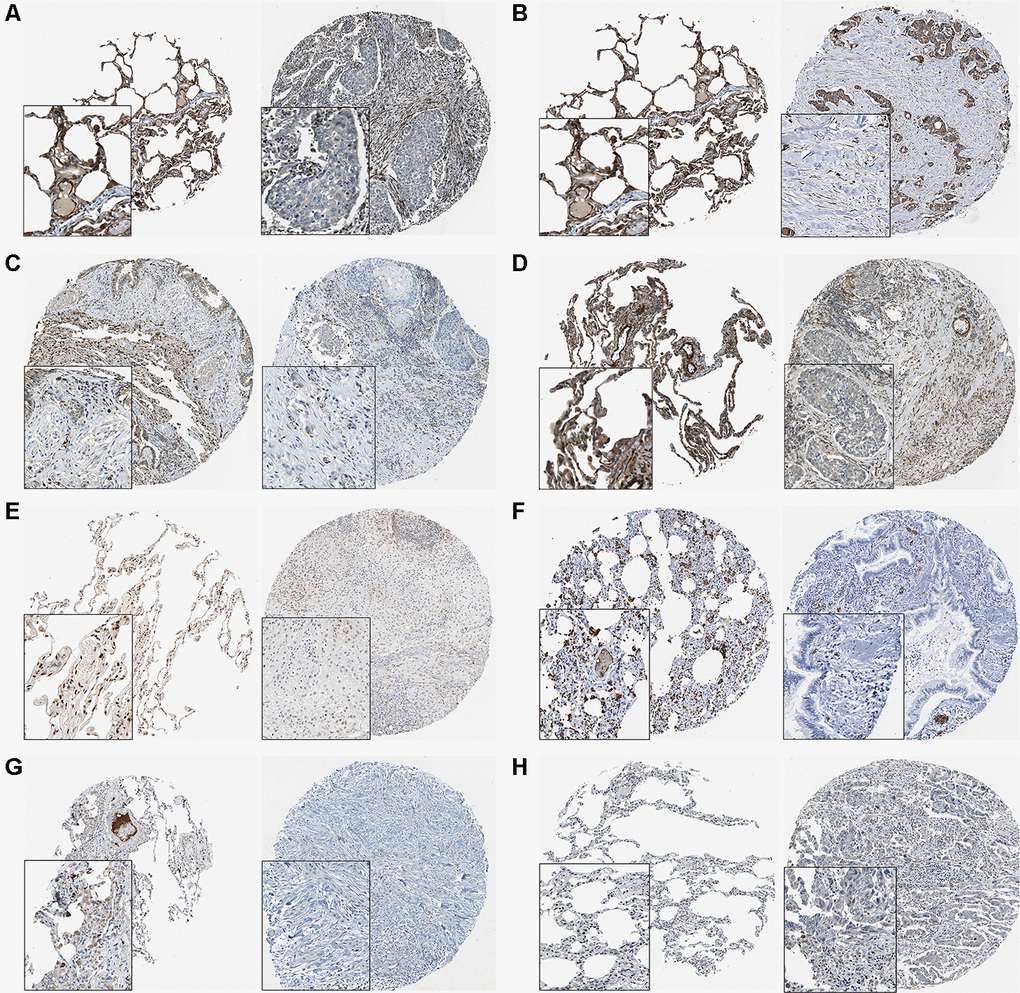 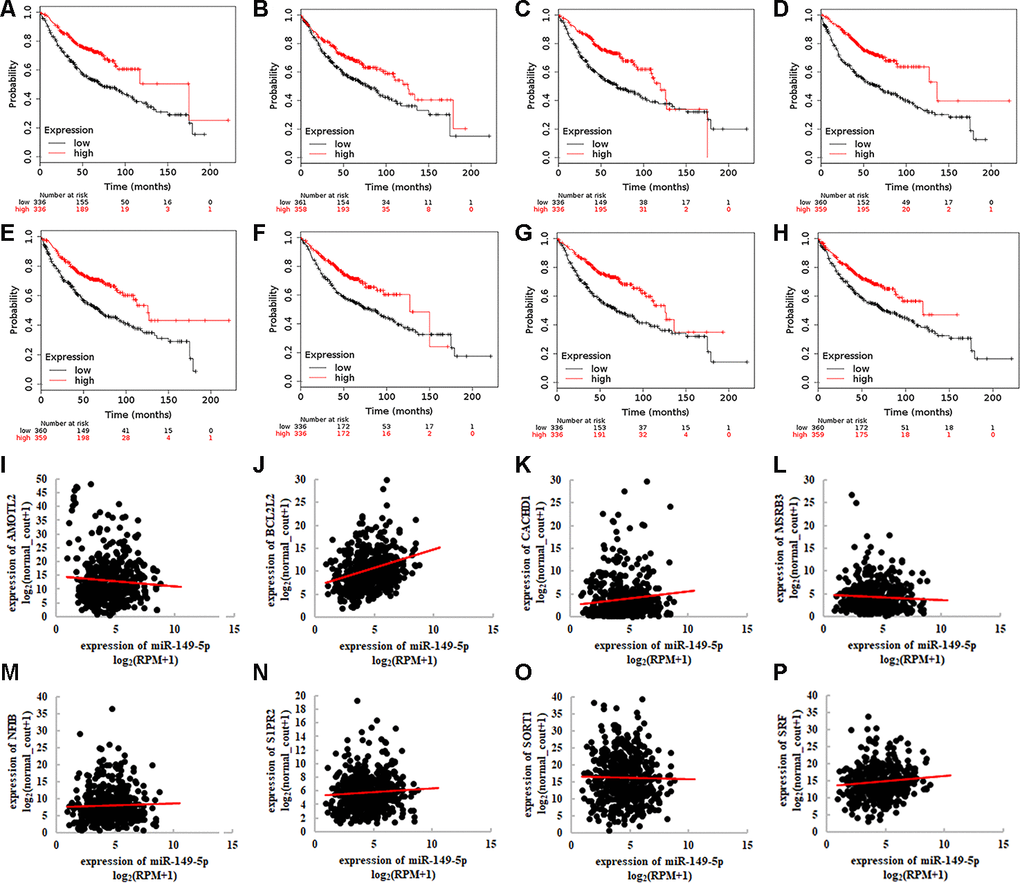 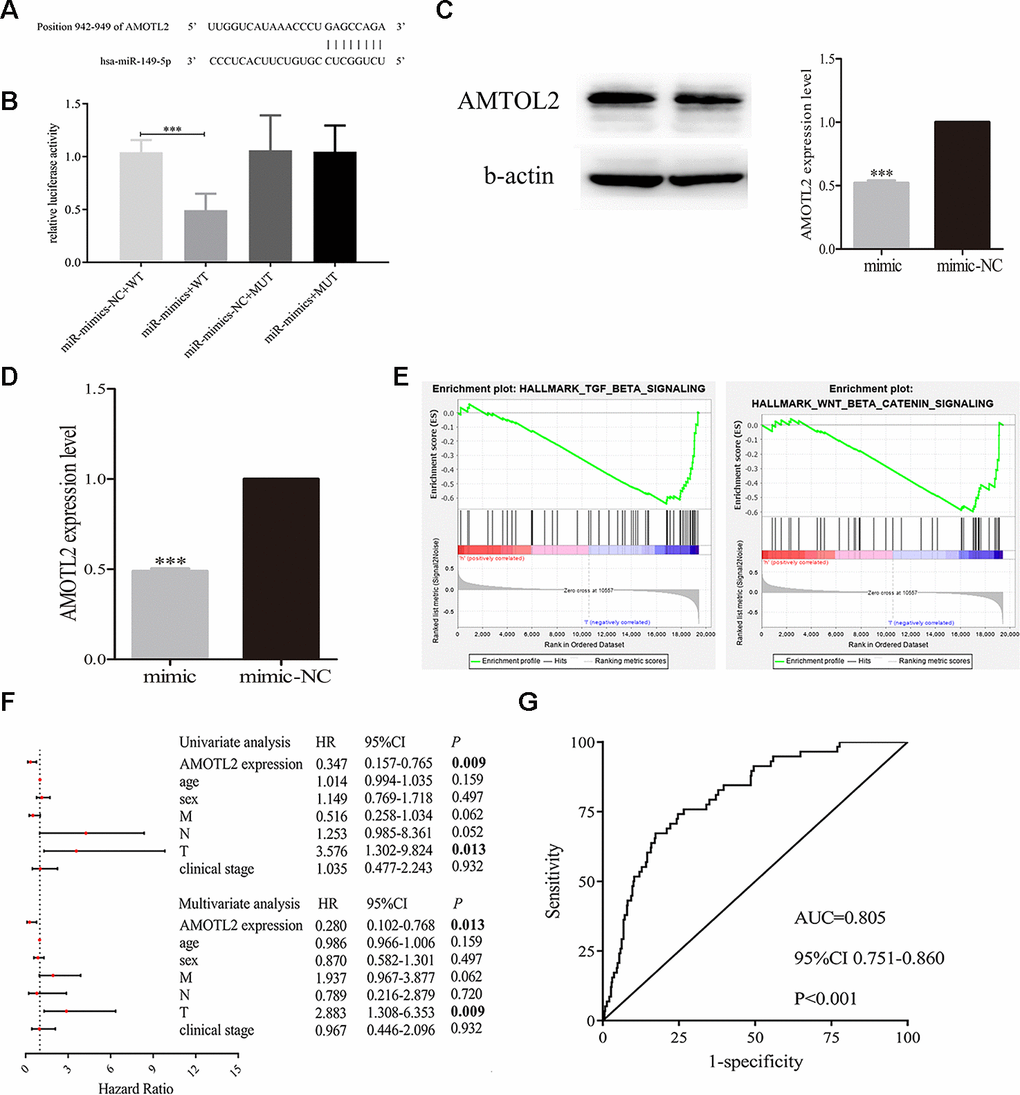 Additionally, we detected whether exosomal miR-149-5p regulated the growth and apoptosis of tumor cells by inhibiting AMOTL2. We transfected AMOTL2-siRNA or AMOTL2-NC and miR-149-5p inhibitor or miR-149-5p NC into A549 cells. We found that the downregulation of AMOTL2 reversed the impacts of miR-149-5p downregulation on proliferation (Figure 9A). The apoptotic assay showed that the promotive effect of miR-149-5p inhibitor on the apoptotic abilities of tumor cells could be rescued by the inhibition of AMOTL2 (Figure 9B). 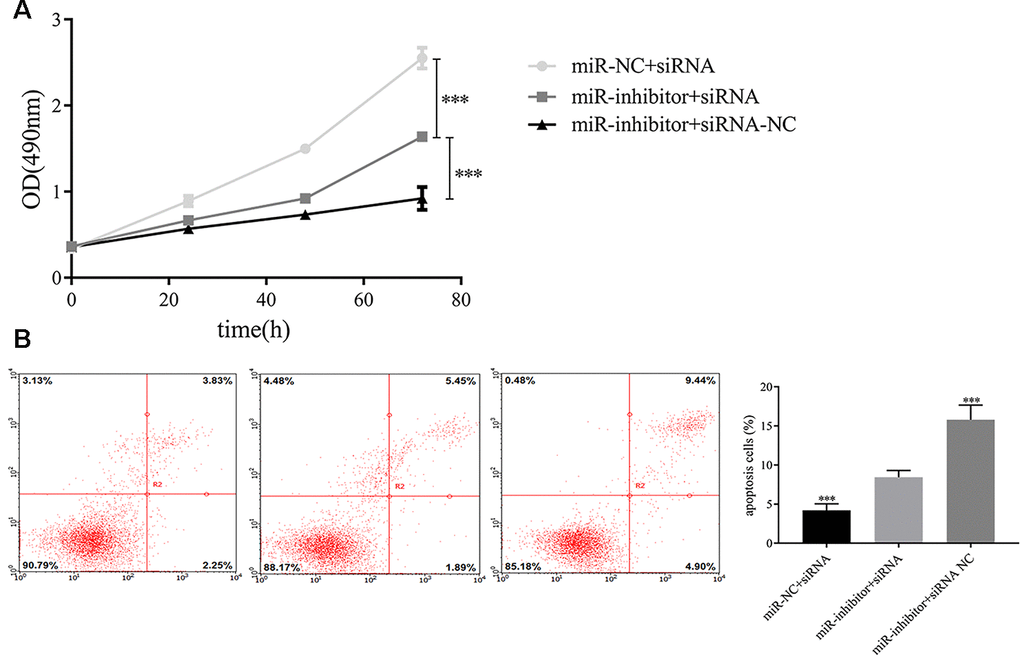 To identify the downstream targets of exosomal miR-149-5p, bioinformatics tools were used to predict target genes. Among them, 8 genes were aberrantly expressed in lung adenocarcinoma. The immunohistochemical results also proved the similar tendency. The survival analyses of those genes revealed the protective factors in lung adenocarcinoma. Further, the results of expression analyses in TCGA-LUAD revealed that miR-149-5p was a negative regulator of AMOTL2, indicating that exosomal miR-149-5p regulated metastasis of tumor cells by targeting AMOTL2 gene.

In summary, we analyzed GSE111803 raw data and identified genes for construction of a WGCNA co-expression network. Our results demonstrated that exosomal miR-149-5p activated the growth and reduced apoptotic rate of tumor cells in lung adenocarcinoma via targeting AMOTL2. Our study suggests that exosomal miR-149-5p may be a reliable tumor microenvironment biomarker in lung adenocarcinoma.

Raw data were downloaded from GEO and normalized using the R package. GSE111803 contained 5 lung adenocarcinoma patients and 5 healthy controls. Adjusted p<0.05 and |log2FC|>1 were set as the criterion for differently expressed exosomal miRNAs. Raw count data and clinical characteristics of TCGA-LUAD cohort were downloaded using the R TCGAbiolinks package. A total of 90 clinical couples from the case-control study were collected to analyze the relationship between exosomal miR-149-5p expression and clinical information. All patients were informed of the study and provided written informed consent. The experiment was approved by the Institutional Review Board of China Medical University (No.67 in 2010) and conducted using methodologies conforming to the standards set by the Declaration of Helsinki.

WGCNA co-expression network was constructed via the R WGCNA package. Exosomal miRNAs were classified into different modules. The soft threshold was calculated when scale-free R2>0.9. Then the cluster dendrogram and network heatmap of selected miRNAs were executed. Eigengene values of modules were calculated and the eigengene adjacency heatmap was carried out.

DIANA-miRPath provides miRNA pathway analyses and accurate statistics. Pathways of exosomal miRNAs in each module were predicted. The prediction of pathways for AMOTL2 was performed via GSEA software.

Exosomes were isolated by Minute™ Hi-Efficiency Exosome Precipitation Reagent (Invent EI-027) according to the protocol and then filtered with a 0.22 μm filter to purify the exosomes. The exosomes were identified by transmission electron microscope observation and exosomal protein biomarkers. The exosomes were fixed with 4% glutaraldehyde at 4° C for 2h, and then rinsed three times with 0.1mol/L PBS and fixed with 1% osmium tetroxide for 2h. Next, dehydrated by conventional ethanol and gradient acetone, exosomes were immersed, embedded, polymerized in epoxy resin and then observed under a transmission electron microscope. The proteins from exosomes were lysed with cell lysis buffer (Takara 635656). CD63 (Abcam 125011) and TSG101 (Abcam 134045) were used as exosome markers.

Total RNA was isolated by RNAiso Plus (TAKARA 9108). Reverse transfection was conducted according to the TAKARA 638313 kit manufacturer's instructions. And then RT-PCR was performed using TAKARA RR820A kit. The sequence of miR-149-5p was as follows: Forward 5’-GTCTTCACTCCCGTGCTTGT-3’; Reverse 5’-CCCGAAACACCCGTAAGATA-3’.

Exosomes were lysed in RIPA buffer (Cell Signaling Technology, Danvers, MA). The total proteins were separated by 10% SDS-PAGE and transferred to PVDF membranes. The membranes were incubated with primary antibodies at 4° C overnight with CD63 diluted 1:2000 (Abcam 217345) and TSG101 diluted 1:1000 (Abcam 125011). Then the membranes were incubated with the corresponding HRP-conjugated secondary antibodies for 2 hours at room temperature.

A549 cells were divided into three groups: miR-149-5p-mimic, miR-149-5p-inhibitor and NC. Plasmids were designed from Syngeneiech (Beijing, China). siRNA-AMOTL2 was used to knockdown the expression of AMOTL2. 1*105 cells were seeded into 6-well plates and transfected plasmids using jetPRIME transfection reagent (Ployplus transfection). After transfection 24 hours, cells were collected for the following experiments.

Cells proliferation was tested using MTS (Promega G3580) according to manufacturer`s instructions. 5*103 cells were seeded into 96-well plates and cultured for 0-72h. 20μL MTS solution was added into each well and incubated for 3h at 37° C with 5% CO2. The OD was measured at 490nm.

The cells were harvested when they reached 80% confluence and washed with PBS twice. Annexin V-APC/7-AAD kit (KeyGEN BioTECH KGA1023) was used to test treated cells apoptosis according to manufacturer`s instructions. The percentage of apoptotic cells were assayed by flow cytometry.

There were no conflicts of interest to disclose.

This study was supported by Fund of National Natural Science Foundation of China (No. 81773524).