Vascular calcification (VC) is the main cause of death in dialysis patients [1]. VC is prevalent in ESRD patients and is predictive of cardiovascular events and mortality [2]. However, there is no effective drug for VC treatment. Apoptosis of vascular smooth muscle cells (VSMCs) produces apoptotic bodies that act as the core of calcification and promote calcification [3]. Medial VC, which is associated with enhanced mortality of CKD patients, is caused by osteogenic transdifferentiation of VSMCs [4]. Osteogenic differentiation of VSMCs is the main cytological basis of VC [5].

Cells produce various extracellular vesicles such as exosomes, which are involved in cell-to-cell communication [6–8]. Recent research has shown that bone mesenchymal stem cells (BMSCs) also secrete exosomes [9, 10]. Exosomes possess the ability to transfer nucleic acids and proteins. Therefore, exosomes affect a wide variety of physiological functions of cells [11]. The potential role of exosomes in many diseases has been studied [12–14]. However, there have been few studies on the effect of BMSCs-derived exosomes (BMSC-Exos) on VC of VSMCs. Our previous studies showed that BMSC-Exos inhibit VC of VSMCs, but the specific mechanism had remained unclear [15].

Long noncoding RNAs (lncRNAs) are transcription products of >200 nucleotides in length without a coding function [16, 17]. LncRNA regulates gene expression through a variety of mechanisms, such as acting as a competitive endogenous RNA [16, 18]. Research has shown that lncRNAs play an important roles in multiple biological processes including proliferation, apoptosis, and cellular senescence [19]. These RNAs have been identified as important regulators in development of VC [20]. LncRNA H19 regulate mineralization of the aortic valve by altering the NOTCH pathway [21]. LncRNA-ES3 regulates VC by acting as a competing endogenous RNA for miR-34c-5p [22].

In our previous study, we systematically examined the expression of NONHSAT 084969.2 induced by high phosphorus (Pi) [23]. Next, we aimed to investigate whether NONHSAT084969.2 regulated VC and its mechanism. In this study, we compared the microarray results of Pi and Pi plus BMSC-Exos (Pi + Exo) groups and found that NONHSAT 084969.2 was significantly increased in the Pi group. On the basis of RT-qPCR results, we speculate that NONHSAT 084969.2 plays a regulatory role in VC.

TEM showed that extracellular vesicles of the samples were bowl-shape (Figure 1A). NTA showed that the size of most of BMSC-Exos was approximately 30-150 nm (Figure 1B). Enrichment of exosome markers CD63 and CD 81 was detected in vesicle-enriched fractions. Conversely, histone H3 and cytochrome c, which are negative markers of exosomes, were absent in isolated vesicle-enriched fraction samples (Figure 1C). 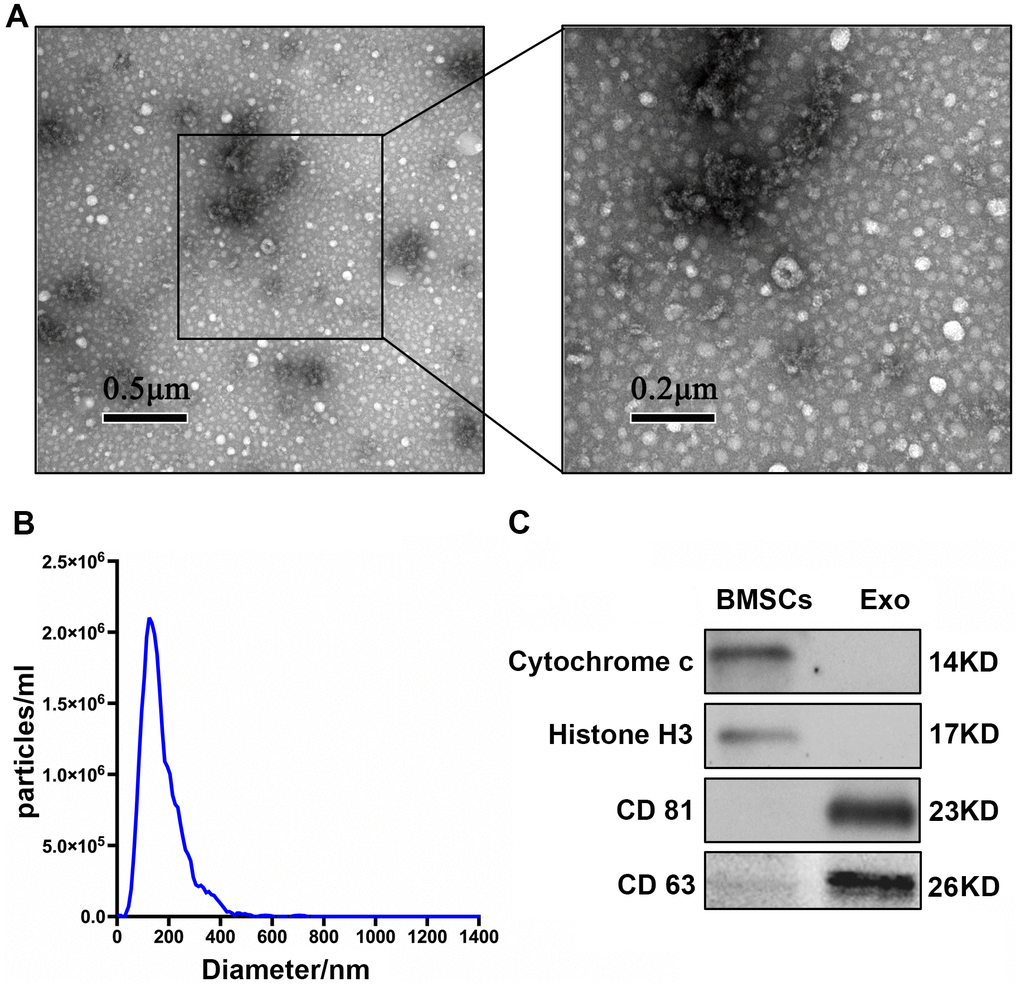 Figure 1. Characterization of BMSC-Exos. (A) TEM analysis of BMSC-Exos is shown. (B) NTA showed that the main peak of the particle size was 132.4 nm. (C) CD81, CD63, cytochrome C, and histone H3 were detected by western blot.

HA-VSMCs were divided into 3 groups: negative control (NC), Pi, and Pi + Exo. Almost no calcium deposit was observed in the NC group. After stimulating the HA-VSMCs with 2.5 mmol/L Pi, extensive mineral deposits can be observed. After administration with BMSC-Exos, mineral deposits were significantly lower than in the Pi group (P <0.05, Figure 2A). Next, we investigated the AKP activity and Ca2+ concentration. Compared with the NC group, the AKP activity and Ca2+ concentration of the Pi group increased. However, BMSC-Exos incubation inhibited the production of Ca2+ and AKP induced by high Pi (Figure 2B). We next detected indicators of transdifferentiation of HA-VSMCs. RT-qPCR and western blot showed that the expression of Runx2, BMP2, and osteocalcin increased significantly, while the expression of Pi + Exo group decreased (Figure 2C–2F). These results suggested that BMSC-Exos ameliorated high Pi-induced transdifferentiation and calcification of HA-VSMCs. 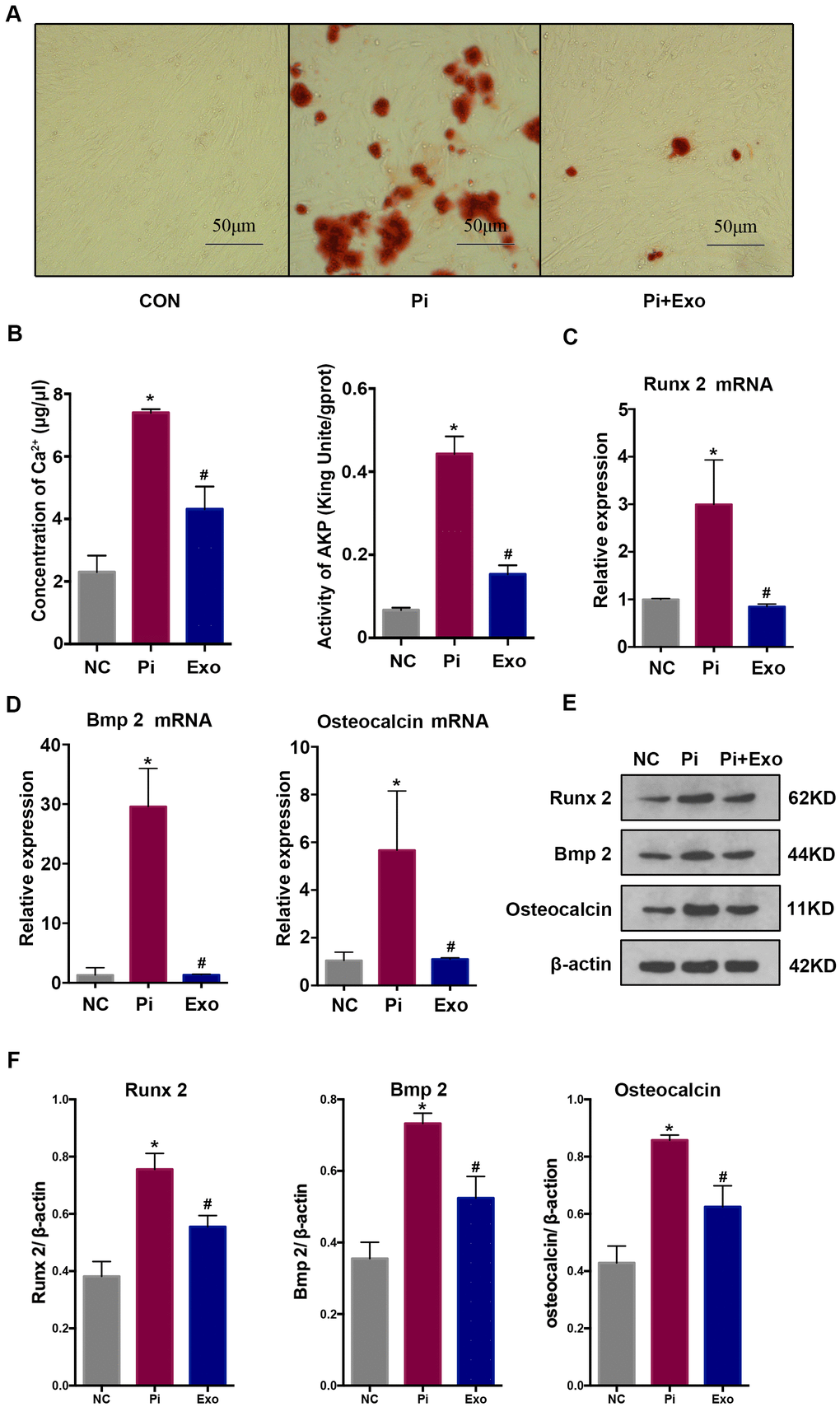 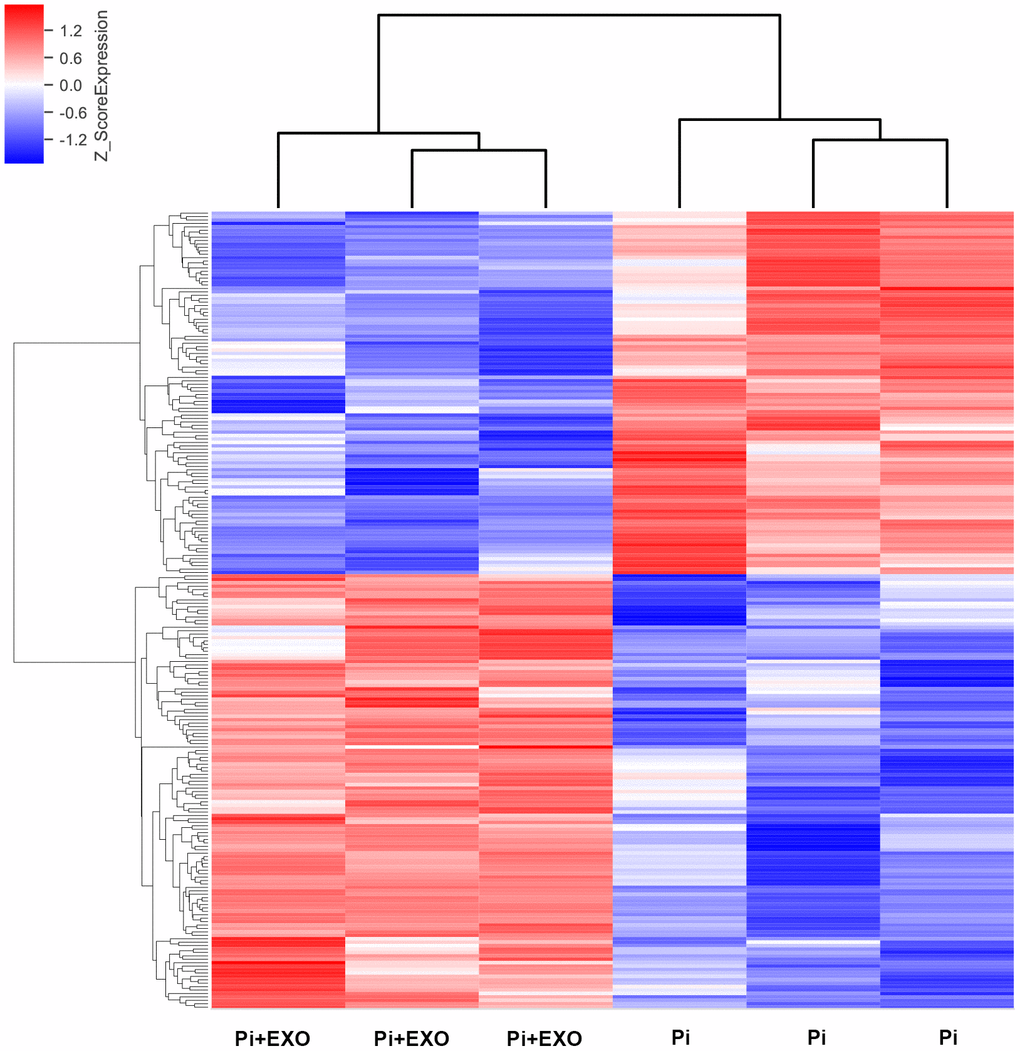 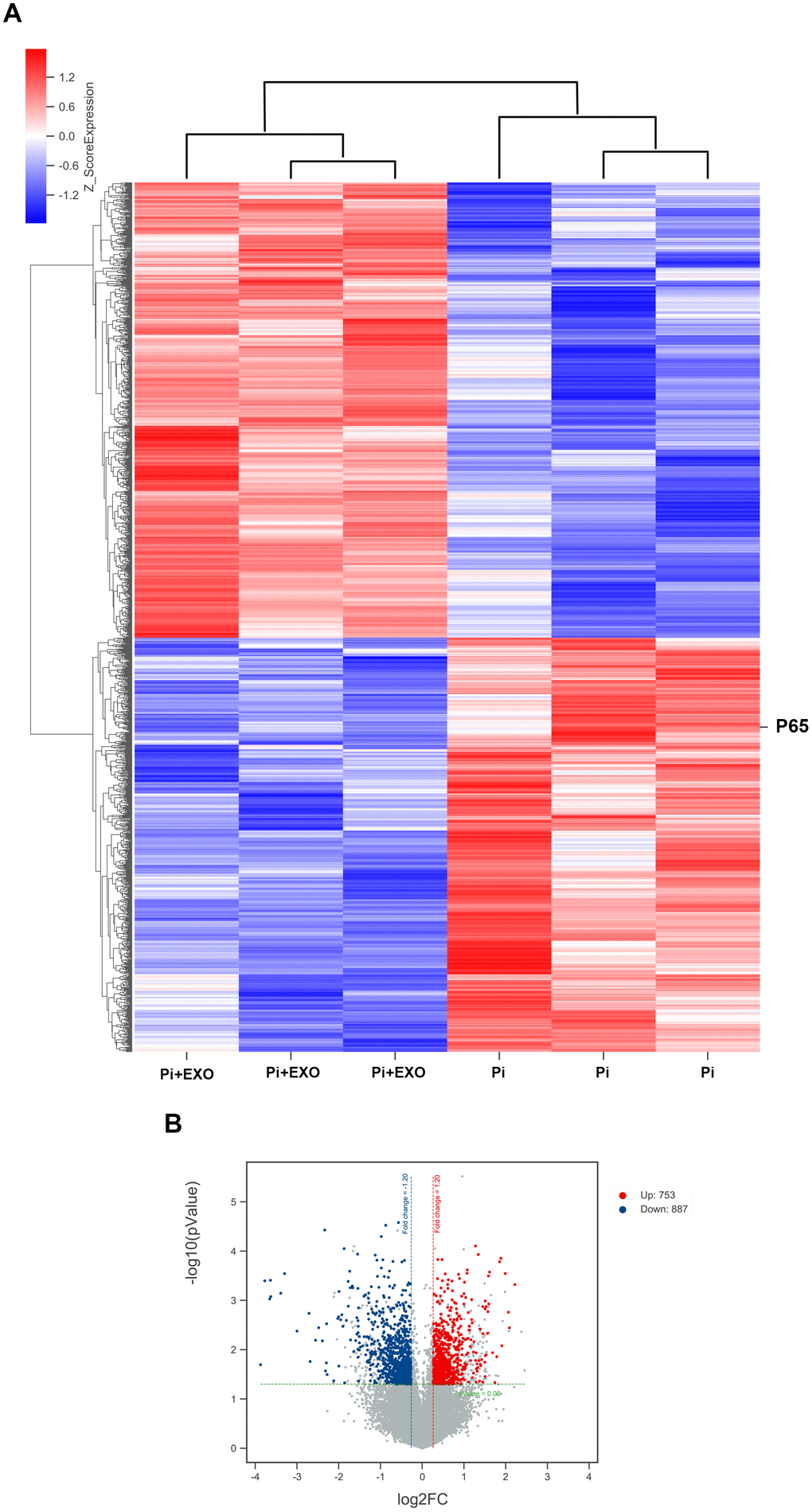 Figure 4. (A) Hierarchical clustering analyses. (B) Volcano map of DEGs.

Table 1. The five most significant downregulated lncRNAs in the Pi+Exo group.

Although we found that BMSC-Exos may reduce calcification, its molecular mechanism was unclear. Using KEGG and GO enrichment pathway analyses of genes, we found that the DEGs were enriched in many classical pathways such as the nuclear factor (NF)-κB pathway (Figure 6). RNA interaction software RIsearch 2.0 was used to predict the direct binding site of NONHSAT 084969.2 and DEGs (number of directly interacting bases: >10, base binding free energy: <−50). We found that NONHSAT 084969.2 and p65 may have a directly regulated relationship. 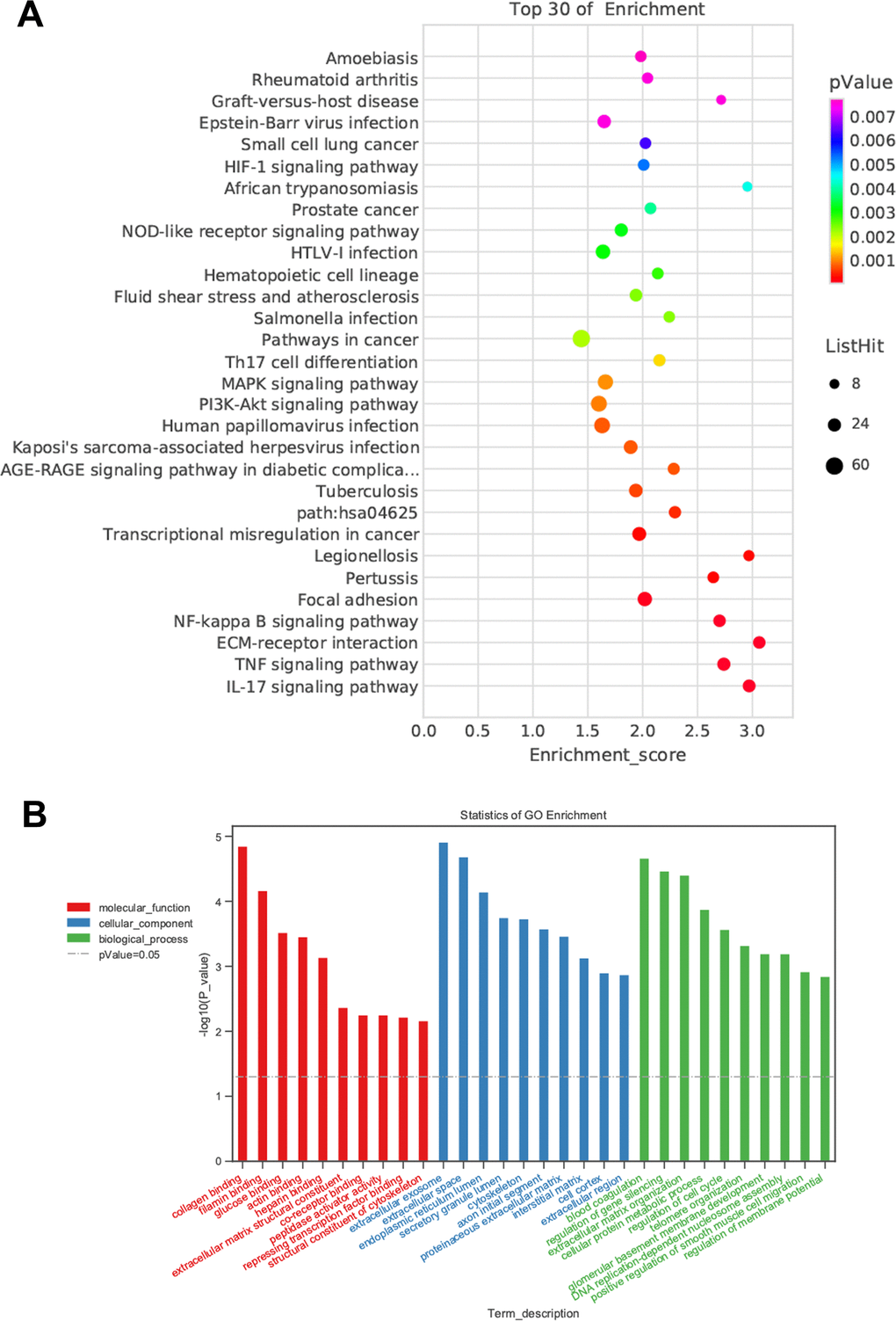 NF-κB p65 and NF-κB p50 expressions were detected by RT-qPCR and western blot (Figure 7A, 7B). The P65 and p50 mRNA and protein levels of the Pi group were significantly higher than those of the Pi + Exo group, the same trend as NONHSAT 084969.2. The Ikk-α enzyme is responsible for degrading IκB-α and activating NF-κB. We found that Ikk-α was downregulated in the Pi + Exo group compared with the Pi group (Figure 7). This is consistent with prediction of the microarray. Therefore, we speculated that NONHSAT 084969.2 promoted the occurrence of VC and regulated activity of the NF-κB pathway. 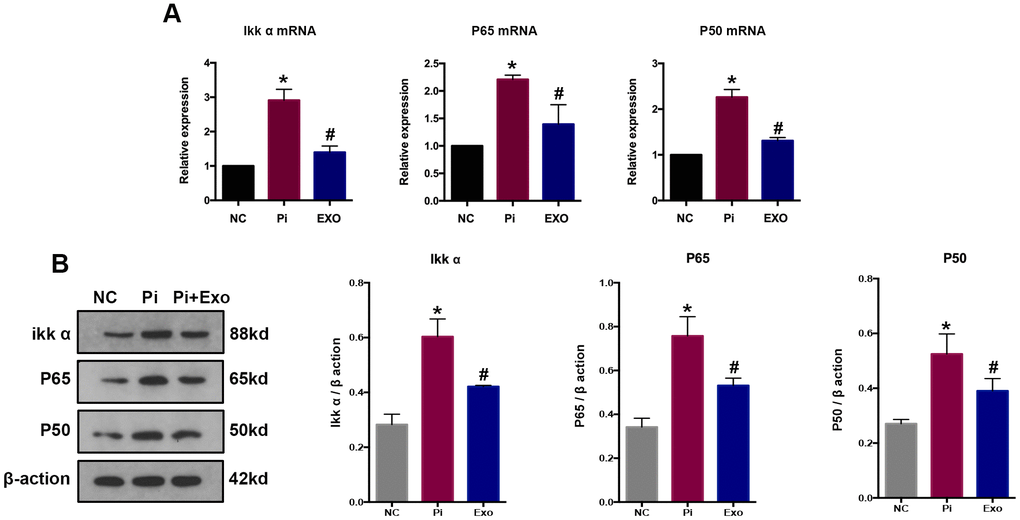 Knock down of NONHSAT 084969.2 enhances the inhibitory effect of BMSC-Exos on high Pi-induced transdifferentiation and calcification 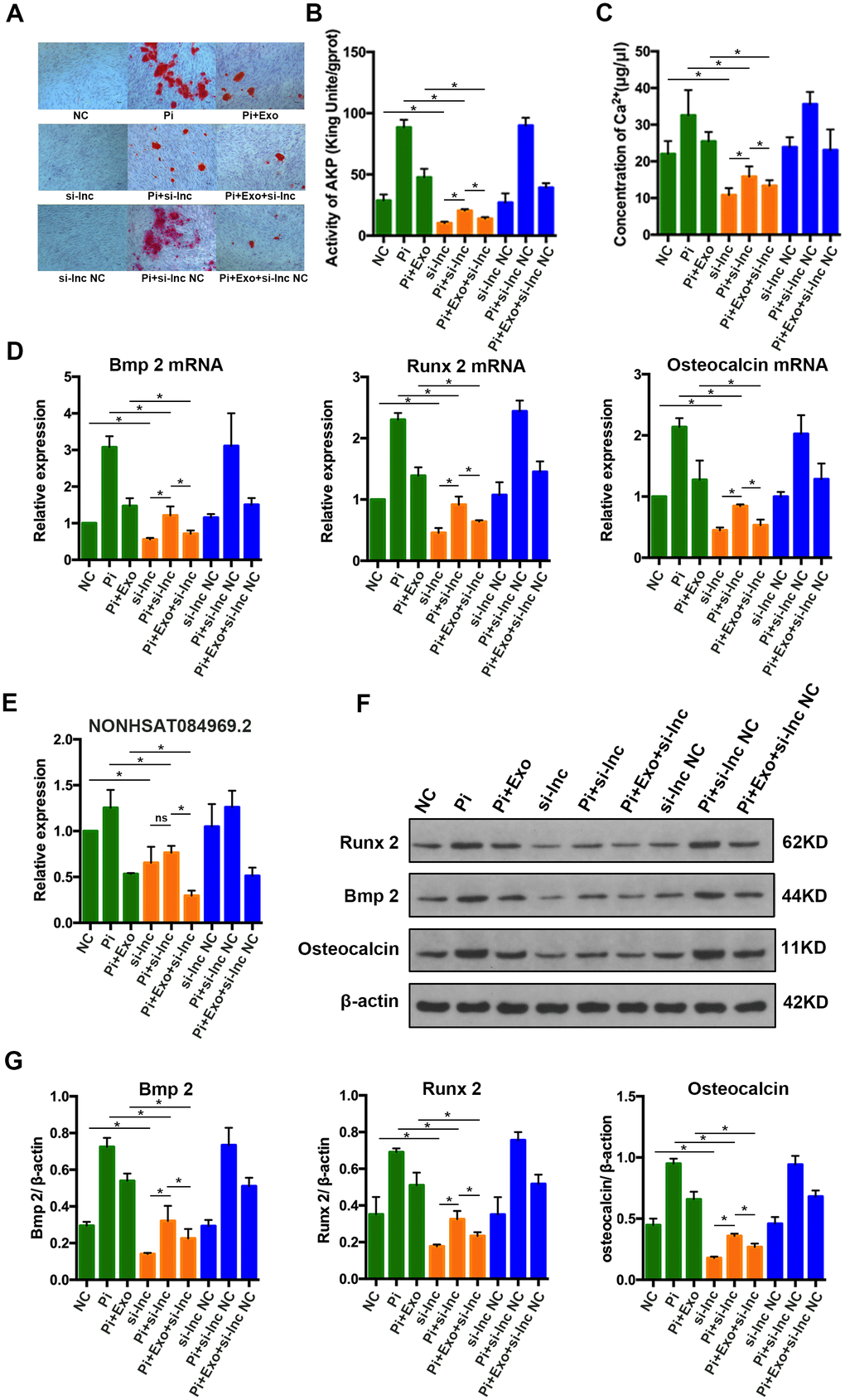 As shown in Figure 8D–8G, RUNX2, BMP2, and osteocalcin mRNA and protein expression levels were significantly decreased in HA-VSMCs after knockdown of NONHSAT 084969.2. This finding was consistent with the trend of NONHSAT 084969.2 expression (Figure 8E), which suggested that NONHSAT084969.2 regulated transdifferentiation and calcification of HA-VSMCs.

Knock down of NONHSAT 084969.2 enhances the inhibitory effect of BMSC-Exos on activity of the NF-κB signaling pathway 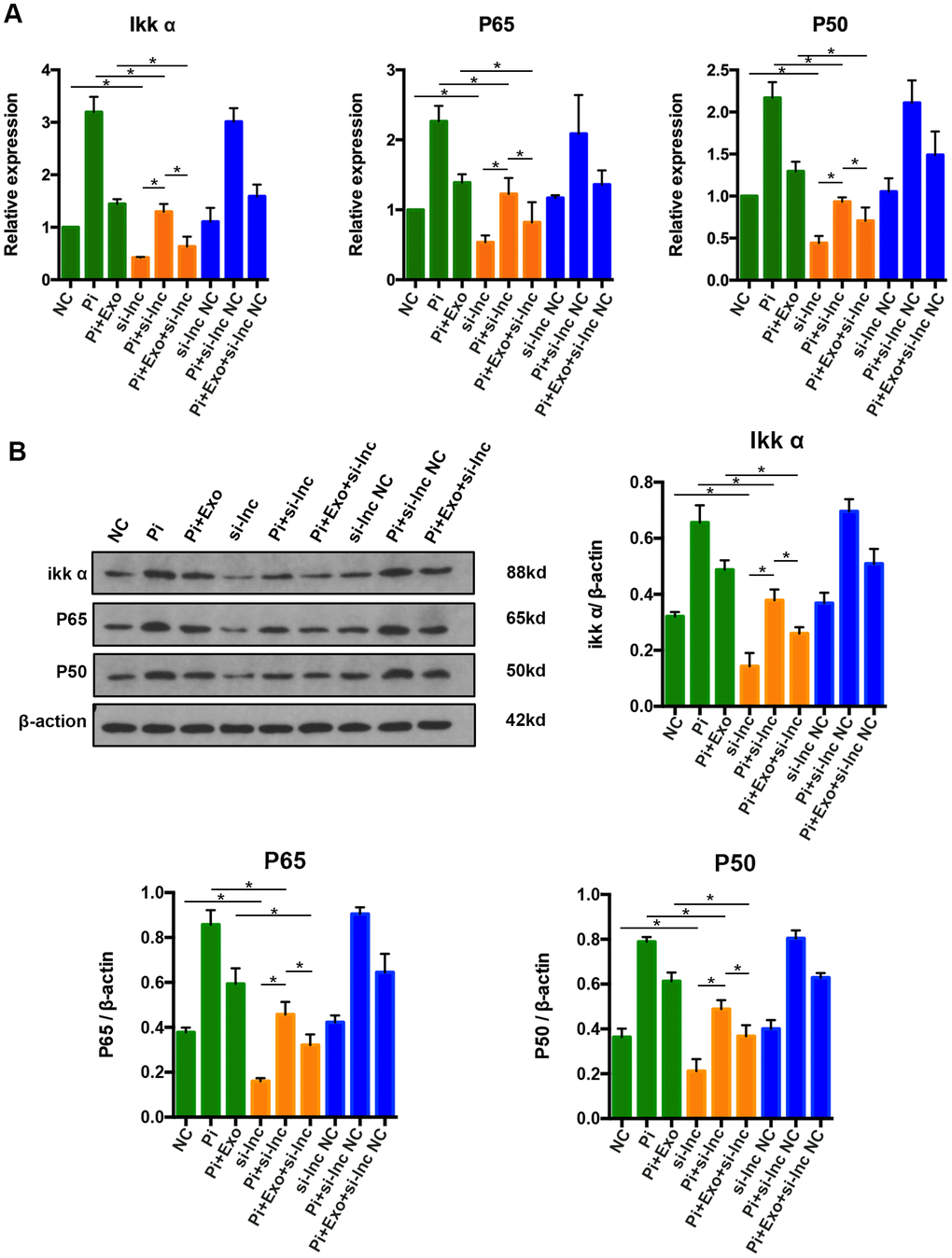 Exosomes are extracellular vesicles with a diameter of 30-150 nm, containing miRNA, lncRNA, mRNA and protein for cell-to-cell communication [24, 25].

Various types of cells can release exosomes for intercellular communication, as well as the transfer of lncRNA, mRNA and microRNA [26]. Currently, various strategies and techniques can be used to obtain exosomes including ultracentrifugation, density gradient separation, Polyethylene glycol coprecipitation and immunoaffinity capture [24]. The density gradient centrifugal extraction method has the highest purity [27].

The following various characterization methods have been developed to identify exosomes. First, biophysical techniques based on spectroscopy, such as TEM and atomic force microscopy. Second, identification of specific antibodies by flow cytometry and western blot. Third, Nanoparticle Tracking Analysis have been developed [28].

Polyethylene glycol coprecipitates with hydrophobic proteins and lipid molecules, which is currently used to collect exosomes. This method is simple and easy to perform, but the recovery and purity are low, which was used to extract exosomes in the current study. Therefore, the therapeutic dose of exosomes was also based on this extraction method. If other methods of purification of exosomes are applied, the therapeutic dose of exosomes should also be adjusted. In fact, under various pathological conditions, exosomes in blood circulation increase and some have been identified as potential disease biomarkers [29]. The occurrence of VC involves complex mechanism networks such as production of stromal vesicles or exosomes, osteogenic differentiation, decreased cell viability, and aging. However, owing to the poor therapeutic effects of existing treatment methods for VC, new treatments are required for VC. Secretory exosomes carrying microRNAs have also been shown to regulate the VC process in receptors of VSMCs [30]. At present, the cause of VC is complex, involving the instability of VSMCs, the deposition of calcium and phosphate, and the transdifferentiation and apoptosis of cells [31].

In the current study, BMSC-Exos were used to stimulate VSMCs. We found that BMSC-Exos inhibited calcification of VSMCs induced by high Pi concentrations. BMSC-Exos contain a large amount of RNAs. When the membrane of these vesicles fuses with the VSMCs membrane, it releases RNAs from the exosomes and regulates various biological processes of smooth muscle. We found many different lncRNAs by microarray analysis. We chose to further study NONHSAT 084969.2, which was the most significant differentially expressed RNA. When NONHSAT 084969.2 was silenced, p65, p50, and Ikk-α were decreased significantly, the NF-κB pathway was inhibited, and VC was weakened. These findings indicate that NONHSAT 084969.2 may be a new target for VC treatment and that its mechanism of regulating VC is related to the NF-κB pathway.

We intend to continue to examine the effect of other substances in BMSC-Exos on VC in the future. Additionally, the mechanism of BMSC-Exos in the inhibition of VC should be clarified to provide a new theoretical basis for clinical treatment of VC.

BMSCs at passages three to six were cultured in exosome-depleted FBS for 72 h.

The conditioned medium was collected, and Exosome Isolation Reagent (Invitrogen, USA) was used in accordance with the manufacturer’s protocol to isolate exosomes.

Exosome-enriched solution was placed on a copper mesh and stained with a uranyl acetate solution. TEM (H-7650; Hitachi Ltd., Tokyo, Japan) was used to photograph the samples.

After fixing with 4% paraformaldehyde, the cells seeded in a six-well plate were stained with 1% Alizarin Red S (pH 4.2) for 15 minutes. Alizarin Red combines with calcium ions to identify calcification components. Orange-red deposits (i.e., calcium nodules) indicate the presence of calcification.

The cells seeded in a six-well plate were digested with trypsin, and disrupted by ultrasonication. The supernatant was used to determine the AKP activity and Ca2+ concentration in accordance with the manufacturers’ instructions. A Calcium Assay kit was purchased from Sigma and an AKP assay kit was purchased from Nanjing Jiancheng Bioengineering Research Institute (China).

Data were presented as the mean ± standard deviation (SD) and were analyzed by GraphPad Prism 6.0 software (USA). The significance of differences was analyzed by the one-way factorial ANOVA followed by LSD test.

The work was supported by the Beijing Natural Science Foundation (No. 7194251) and Beijing Municipal Administration of Hospitals Clinical Medicine Development of Special Funding Support (No. ZYLX201824).