Copyright: © 2021 Xu et al. This is an open access article distributed under the terms of the Creative Commons Attribution License (CC BY 3.0), which permits unrestricted use, distribution, and reproduction in any medium, provided the original author and source are credited.

Osteoporosis is an ageing-related disease, clinically featured by bone loss and increased risk of fracture [1]. The prevalence of osteoporosis usually ranges from 2 to 8% among males and 9 to 38% among females [2]. In China, the incidence of osteoporosis has increased over the past several years, affecting nearly 1/3 of people over 50 years old [3]. The majority of osteoporosis cases occur due to an imbalance between bone resorption and bone formation [4]. There are well documented studies that suggest that microRNAs (miRNAs), non-coding RNAs, are critical regulators of osteoblast-mediated bone formation and remodelling [5]. Deregulation of miRNA expression is clearly associated with bone resorption, bone formation and osteoporosis [5–8]. The selective expression of miR-34c in osteoblasts from ageing mice resulted in defects in osteoblast proliferation and mineralization [9]. It was reported that lupus patients with higher level of miR-148a expression shown reduced bone mineral density (BMD), which was consistent with the finding that increased expression level of miR-148a lead to pro-osteoclastic effects [10]. Additionally, miR-133a expression is linked to lower BMD [11].

Extracellular vesicles (EVs) are characterized as membrane-bound nanoparticles (30–400 nm) [12]. Specifically, circulating EVs are differentially changing in size [12]. In healthy bone, exosomes can transmit molecules involved in both bone synthesis and resorption and are also involved in bone remodelling and even extracellular matrix mineralization. Till now, it remains elusive of EVs contents and function in osteoporosis. In this study, we examined the concentration, cargo and function of extracellular vesicles in osteoporosis. We evaluated the effects of osteoporosis on the EV profile and on alterations in miRNAs and the Wnt signalling pathway in osteoporosis-derived EVs. We further examined the potential roles of osteoporosis-related EVs in regulating mineralization in osteoclast cells.

To examine the role of EVs in osteoporosis, plasma EVs were isolated by subjecting to sequential low- and high-speed centrifugation. Exosome markers Annexin-V and TSG101 were found in all EV samples (Figure 1A). In addition, we observed the intact round vesicles of 50–200 nm under the electron microscopy (Figure 1B). Nanoparticle tracking analysis confirmed that the EVs were 50–150 nm (a peak around 83 nm) spherical particles with a complete membrane structure (Figure 1C), demonstrating that these vesicles are characteristic of exosomes. 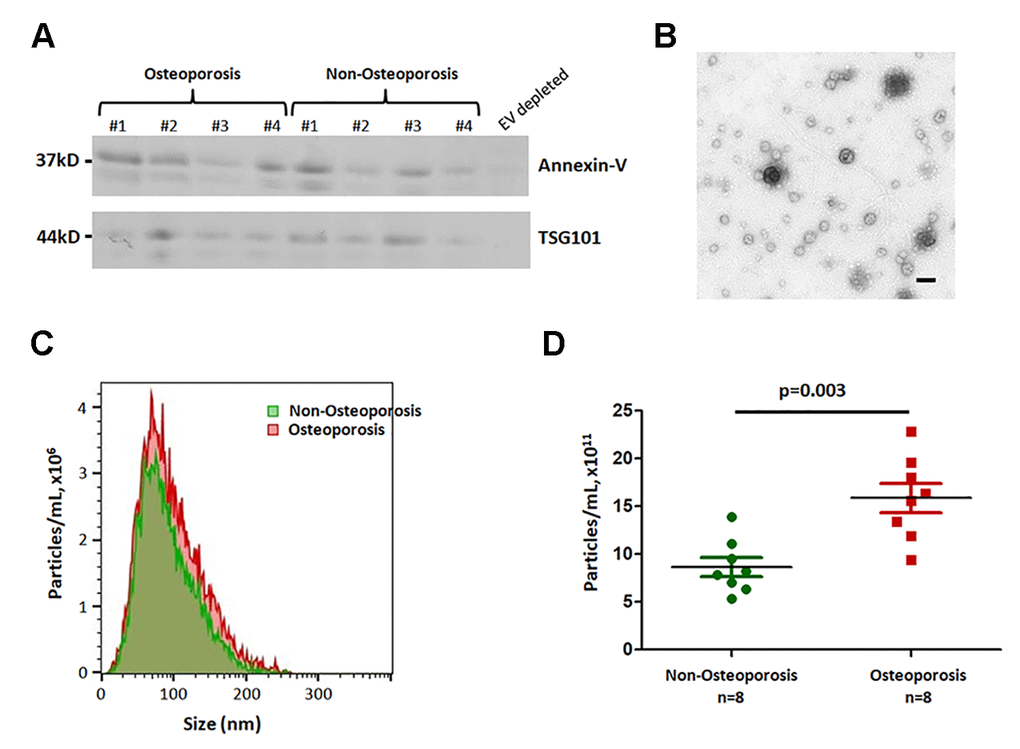 Figure 1. Characterization and concentration analysis of extracellular vesicles. (A) Plasma-derived EVs isolated from four individuals with osteoporosis, four individuals without osteoporosis, one EV-depleted plasma sample were subjected to SDS-PAGE and probed for EV-enriched proteins, Annexin-V and TSG101. (B) Electron microscopy of EVs. Scale bar = 500 nm. (C) and (D) Nanoparticle tracking analysis (NTA). The area under the curve in (C) is shown in (D).

Table 1. Summary of characteristics of clinical samples enrolled in the pilot study.

A differential ultracentrifugation protocol [13] was employed to further evaluate the EV concentration. Higher concentration of EVs was found in osteoporotic subjects when EVs were spin down at the speed of 10,000 × g and 120,000 × g (Supplementary Figure 1).

We further test the correlation of EVs with BMD by using a cohort of 7 normal controls, 7 Osteopenia and 7 Osteoporotic patients. Results shown EVs concentration had a linear correlation with BMD values (r = 0.9542, p < 0.001) (Figure 2A). We further recruited an independent cohort to evaluate the effect of gender on EV concentration (Table 2). There were no significant differences in EVs concentrations (Male, p = 0.02; Female, p = 0.03, Figure 2B) comparing to non-osteoporotic and osteoporotic males. We further confirm the results using a mouse model of osteoporosis [14], mice were divided into 3 groups: AC, HU, and US. Results shown that the number of extracellular vesicles in HU mice was higher than AC (both p = 0.015, Figure 2C). US mice had reduced numbers of EVs compared to that of HU mice (both p = 0.013, Figure 2C). 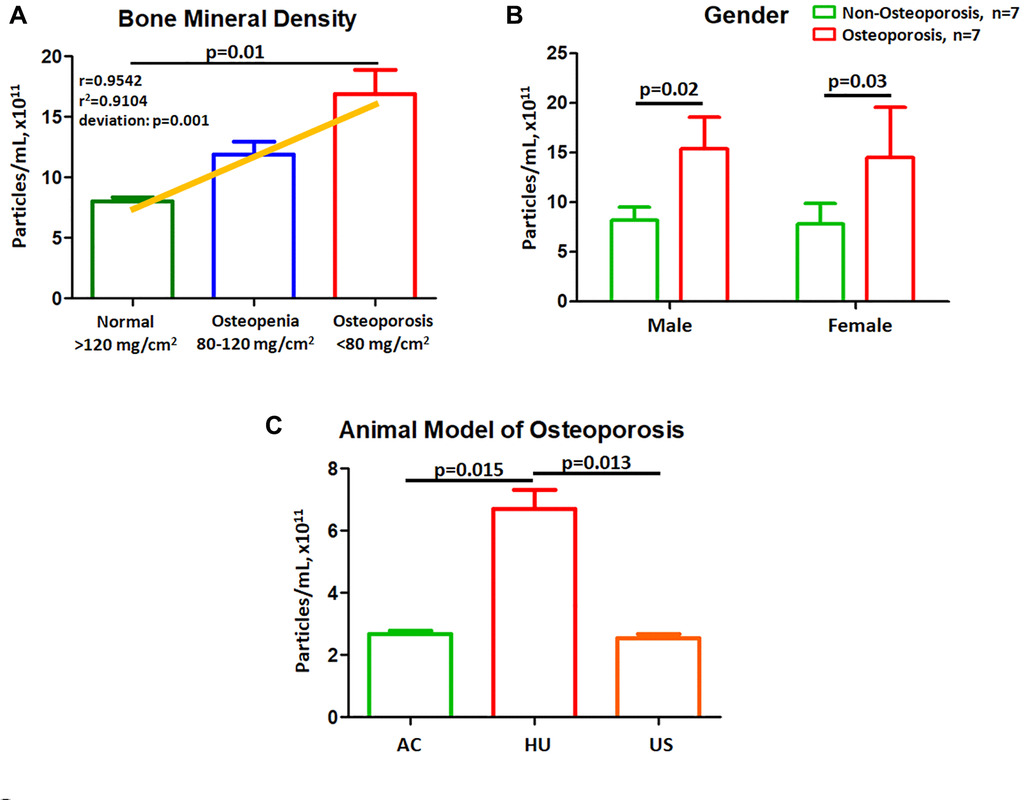 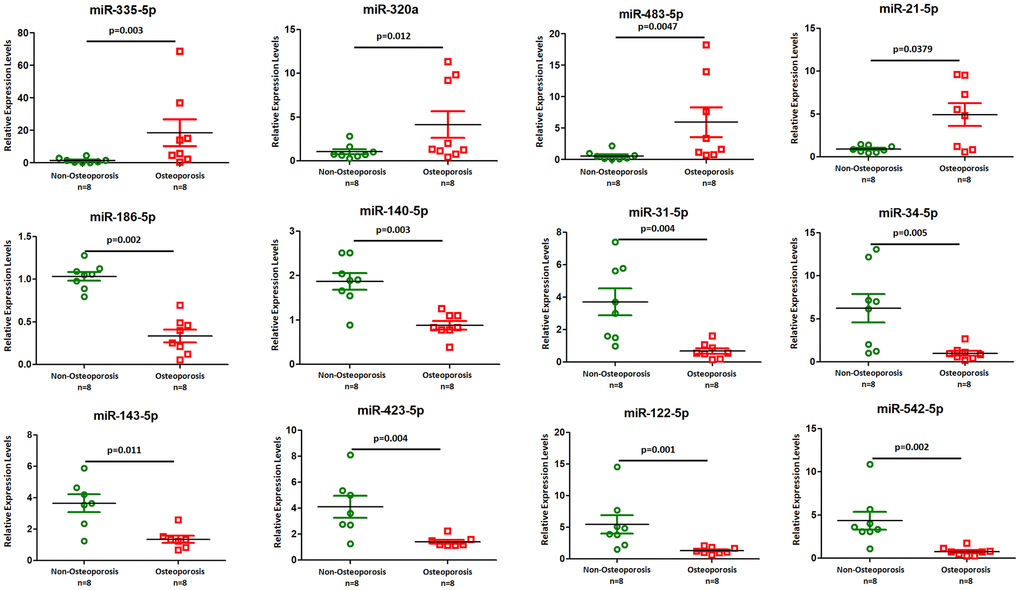 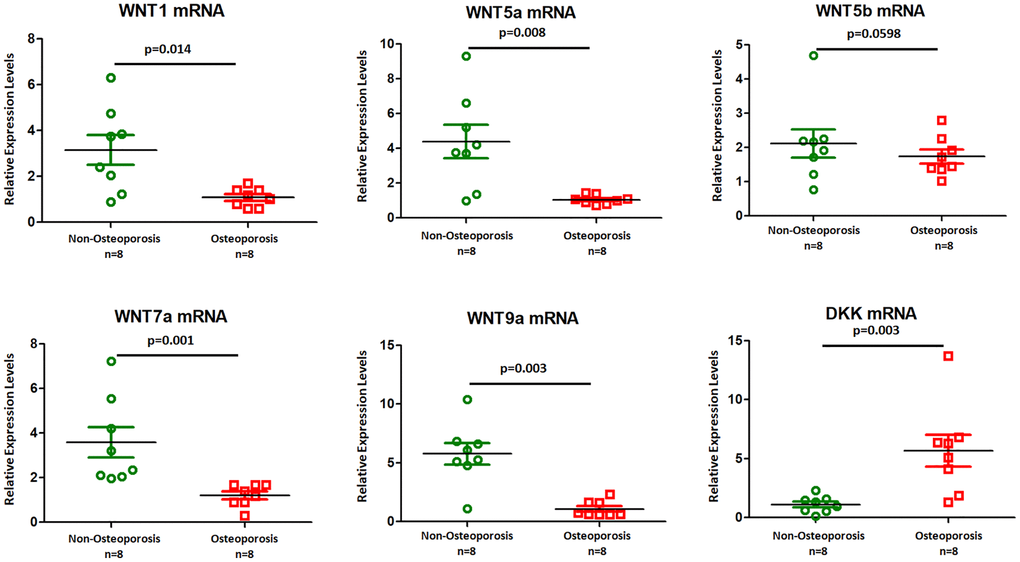 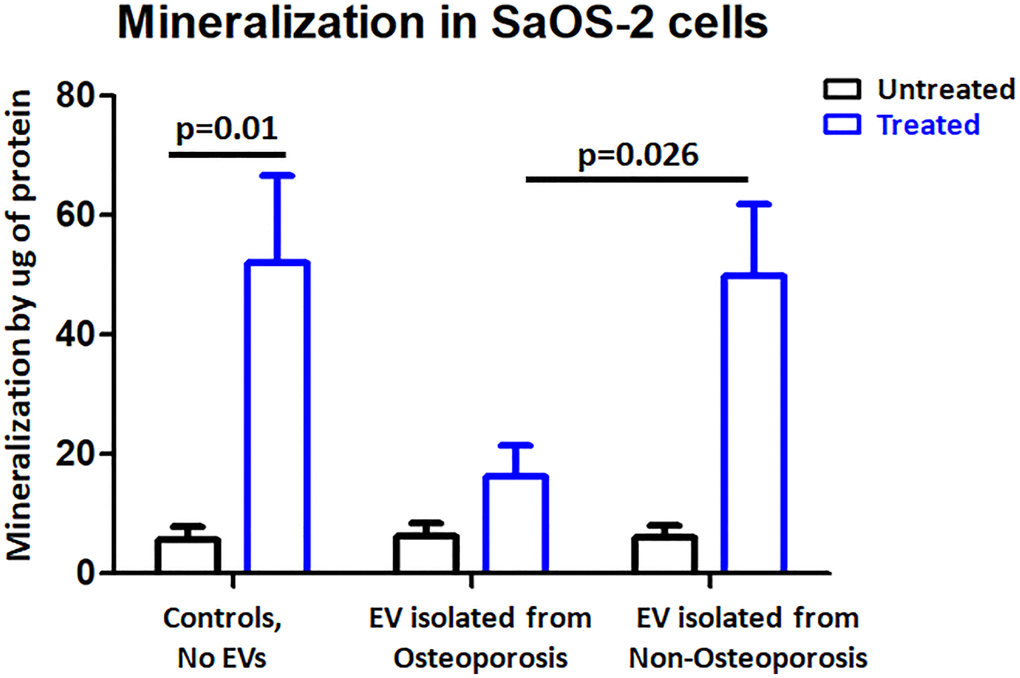 Osteoporosis is the most common systemic bone disease characterized by a rapid decline in bone mass [16, 17]. In this study, we investigated the effects of osteoporosis on EV profiles and alterations in osteoporosis-related miRNAs and the Wnt signalling pathway. The results of our study revealed a remarkably higher concentration of EV in osteoporotic subjects than in non-osteoporotic individuals (P = 0.003). In addition, plasma EV concentrations were found to be related to BMD, and this effect was gender independent in osteoporotic patients. More importantly, significantly more extracellular vesicles were present in a mouse model of osteoporosis than in control mice. EVs are heterogeneous nanosized vesicles, and their cargo contains nucleic acids and proteins on the surface or in the lumen. EV structure allows for the transfer of EV cargo to specific acceptor cells; thus, through this mechanism, EVs communicate between cells during osteoporosis. Patients with type 1 diabetes tend to have the pro-osteogenic properties of stem cells-derived exosomes, consistent with the pathogenesis of diabetes-related osteoporosis [18]. In addition, the systemic injection of stem cell derived EVs can inhibit osteoporosis by promoting osteoblastic bone formation [19].

miRNAs are involved in bone formation and resorption [5, 7, 8]. Claudine Seeliger et al. identified that serum miRNAs and tissue miRNAs are associated with osteoporotic fractures [20]. Hongqiu Li et al. detected the plasma expression levels of miR-21, miR-133a and miR-146a that related with BMD in osteoporosis [21]. miR-140-3p and miR-214 were reduced in the animal models of osteoporotic fractures, while miR-148a and miR-218 were associated with osteoclastogenesis [22]. miR-21 was found to be up-regulated in osteoporotic individuals and shown antiosteogenic effect by inhibiting SMAD7 protein and subsequently down regulating ALP, OCN, and RUNX2 [23]. miR-155 found in endothelial progenitor cell-derived exosomes could inhibits osteoporosis by blocking osteoclast induction [24]. In addition, miR-125 could promote bone regeneration by inducing angiogenesis during distraction osteogenesis [25]. More importantly, several miRNAs were validated to regulate Wnt signaling. For example, miR-152-3p and miR-335 could target Dickkopf-1 [26, 27], while miR-22-3p and miR-34a-5p specifically target WNT1 [28, 29]. The results of our study demonstrated that the miRNA expression profile was dysregulated in osteoporosis-derived EVs. We found that four miRNAs, including miR-335-5p, miR-320a, miR-483-5p, and miR-21-5p, were significantly more highly expressed in osteoporotic patients than in non-osteoporotic individuals (Figure 3). Furthermore, the abundance of eight miRNAs, including miR-186-5p, miR-140-5p, miR-31-5p, miR-34-5p, miR-143-5p, miR-423-5p, miR-122-5p, and miR-542-5p, was significantly lower in osteoporotic patients than in non-osteoporotic individuals (Figure 3). These findings indicated that dysregulated vesicle non-coding small RNAs may be involved in osteoporosis development. In addition, the results of our study demonstrated that the mRNA levels of Wnt1, Wnt5a, Wnt7a, and Wnt9a were lower in osteoporosis-derived EVs than in non-osteoporosis-derived EVs (Figure 4), while DKK mRNA was up-regulated in osteoporotic individuals compared to non-osteoporotic individuals. Our results suggest that Wnt signalling is a potential regulator of osteoporosis development. Many studies demonstrated a role for the Wnt pathway in osteoporosis [30, 31]. When Wnt is active, adipogenic transcription factors are reduced expressed, and preadipocytes are thus maintained in an un-differentiated state [32]. Defective Wnt signalling in osteoporotic bone lead to impairment of tissue response, and further increased risk of fracture. β-catenin as the downstream effector of Wnt activation has a role in bone remodel and bone damage repair [33, 34], which further determined the bone mass distributions in the patients with osteoporosis.

Our study still has some limitations. First, small sample size and the results need independent validation with a larger cohort. In addition, which subtypes of EVs are responsible for the regulation of osteoporosis development remains to be investigated. Third, we have not assessed the in vivo function of EVs in osteoporosis with an animal model. We will extend the findings of this study to the effects of EVs on biochemical pathways known to regulate osteoclast maturation and hydroxyapatite metabolism (e.g., RANK, RANKL, Osteoprotegerin, PTH).

In conclusion, our pilot study demonstrated for the first time a significantly higher EV concentration in osteoporosis patients than in individuals without osteoporosis. There were significant alterations in EV cargo contents, including miRNAs and Wnt RNA molecules. More importantly, a functional assay indicated that osteoporotic-derived EVs notably decreased the mineralization capacity of osteoblasts. These findings provide potential novel strategies for therapeutic intervention.

EVs were fixed in 2% paraformaldehyde solution and processed into ultrathin sections. All sections were examined by transmission electron microscopy. EV size distribution and concentration was evaluated using a NanoSight NS500.

Mann-Whitney test and Kruskal-Wallis test were chosen as indicated for data analysis. BMD correlation was analyzed by D’Agostino-Pearson test. GraphPad Prism 6.0 was used in this study. P < 0.05 was considered significant.