Copyright: © 2021 Kao et al. This is an open access article distributed under the terms of the Creative Commons Attribution License (CC BY 3.0), which permits unrestricted use, distribution, and reproduction in any medium, provided the original author and source are credited.

Breast cancer is a complex disease, and several processes are involved in its development. Therefore, potential therapeutic targets need to be discovered for these patients. Proteasome 26S subunit, ATPase gene (PSMC) family members are well reported to be involved in protein degradation. However, their roles in breast cancer are still unknown and need to be comprehensively researched. Leveraging publicly available databases, such as cBioPortal and Oncomine, for high-throughput transcriptomic profiling to provide evidence-based targets for breast cancer is a rapid and robust approach. By integrating the aforementioned databases with the Kaplan–Meier plotter database, we investigated potential roles of six PSMC family members in breast cancer at the messenger RNA level and their correlations with patient survival. The present findings showed significantly higher expression profiles of PSMC2, PSMC3, PSMC4, PSMC5, and PSMC6 in breast cancer compared to normal breast tissues. Besides, positive correlations were also revealed between PSMC family genes and ubiquinone metabolism, cell cycle, and cytoskeletal remodeling. Meanwhile, we discovered that high levels of PSMC1, PSMC3, PSMC4, PSMC5, and PSMC6 transcripts were positively correlated with poor survival, which likely shows their importance in breast cancer development. Collectively, PSMC family members have the potential to be novel and essential prognostic biomarkers for breast cancer development.

The PSMC family is comprised of six members, namely PSMC1, PSMC2, PSMC3, PSMC4, PSMC5, and PSMC6, which partially constitute formation of the 19S regulatory complex. This complex plays an important role in regulating the 26S proteasome, which in turn, catalyzes the unfolding and translocation of substrates into the 20S proteasome. In addition, members of the PSMC gene family, except for PSMC3, are known to cause N-CoR degradation [12]. Previous studies showed that PSMC6 promotes osteoblast apoptosis and cancer cell proliferation, while PSMC2 inhibits apoptosis. Furthermore, PSMC6 also inhibited activation of the PI3K/AKT signaling pathway in an animal model of ovariectomy-induced osteoporosis [13–15]. PSMC5 participates in degradation of Tln1 and angiogenesis [16]. In hepatocellular carcinoma cells, knockdown of PSMC3IP resulted in suppression of xenograft proliferation and tumorigenesis [17].

High-throughput technologies are widely used as systemic approaches to explore differences in expressions of thousands of genes for both biological and genomics systems [18–20]. It is well recognized that many upregulated and downregulated genes are associated with oncogenic or tumor-suppressive functions in cancer development [21–26]. Nevertheless, a holistic approach to exploring messenger (m)RNA levels of the entire PSMC family in breast cancer has not been conducted.

Therefore, in the present study, we analyzed all available mRNA data from public breast cancer databases, comparing datasets from breast cancer patients with those from normal tissues. We also predicted interactive networks and gene regulatory networks related to the PSMC family to determine potential biomarkers. A meta-analysis approach was adopted to screen downstream molecules associated with PSMC genes. Based on our analysis, PSMC family members and their downstream-regulated genes are potential candidates for new therapeutic targets in breast cancer progression. 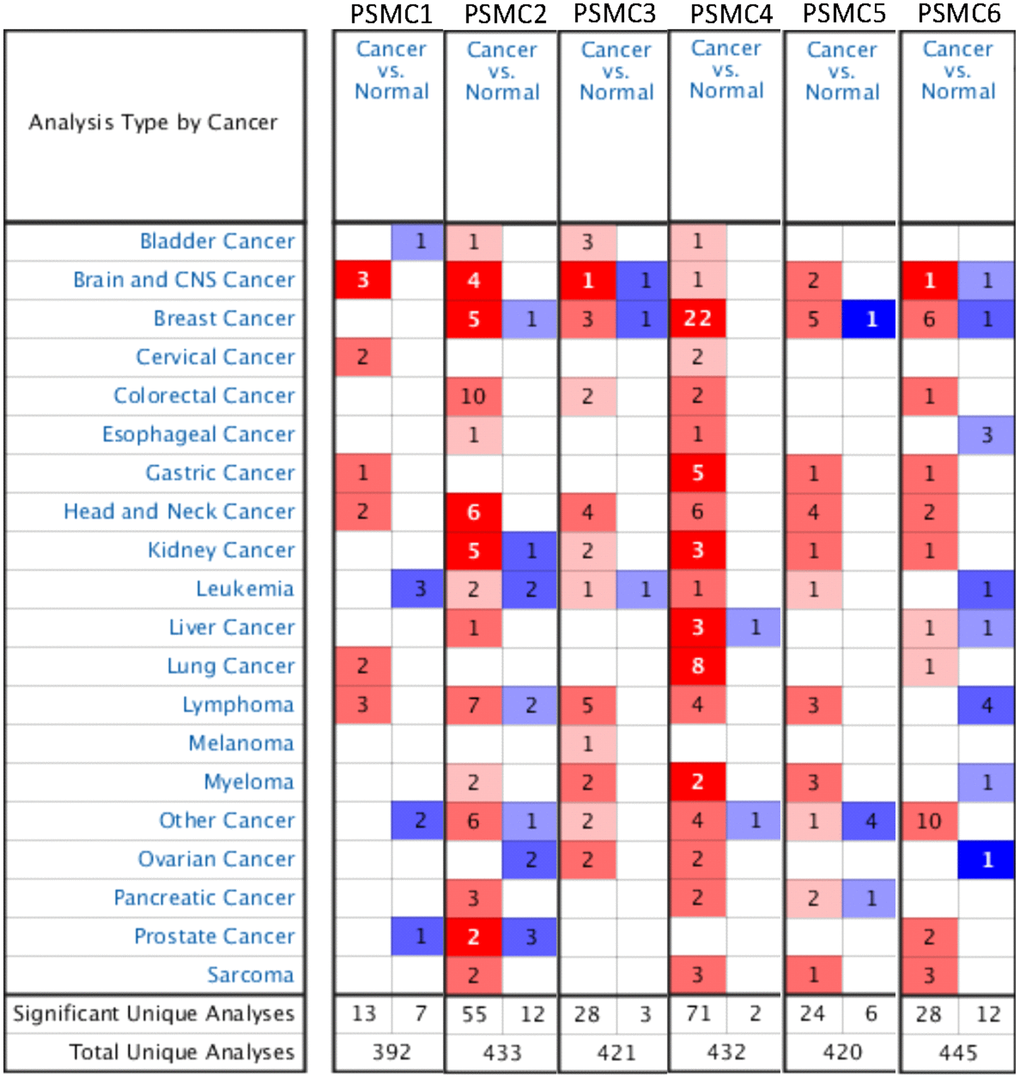 Figure 1. Overview of mRNA expression levels of proteasome 26S subunit, ATPase (PSMC) genes in multiple types and subtypes of cancer from the Oncomine database. The analysis compared expressions of target genes in breast cancer tissues relative to normal matched tissues. Red and blue gradients display the top-ranked genes in specific datasets. Significant unique analysis means the number of datasets that satisfied the threshold of >2 multiples of change, p<0.05, and in the top 10% gene ranking. 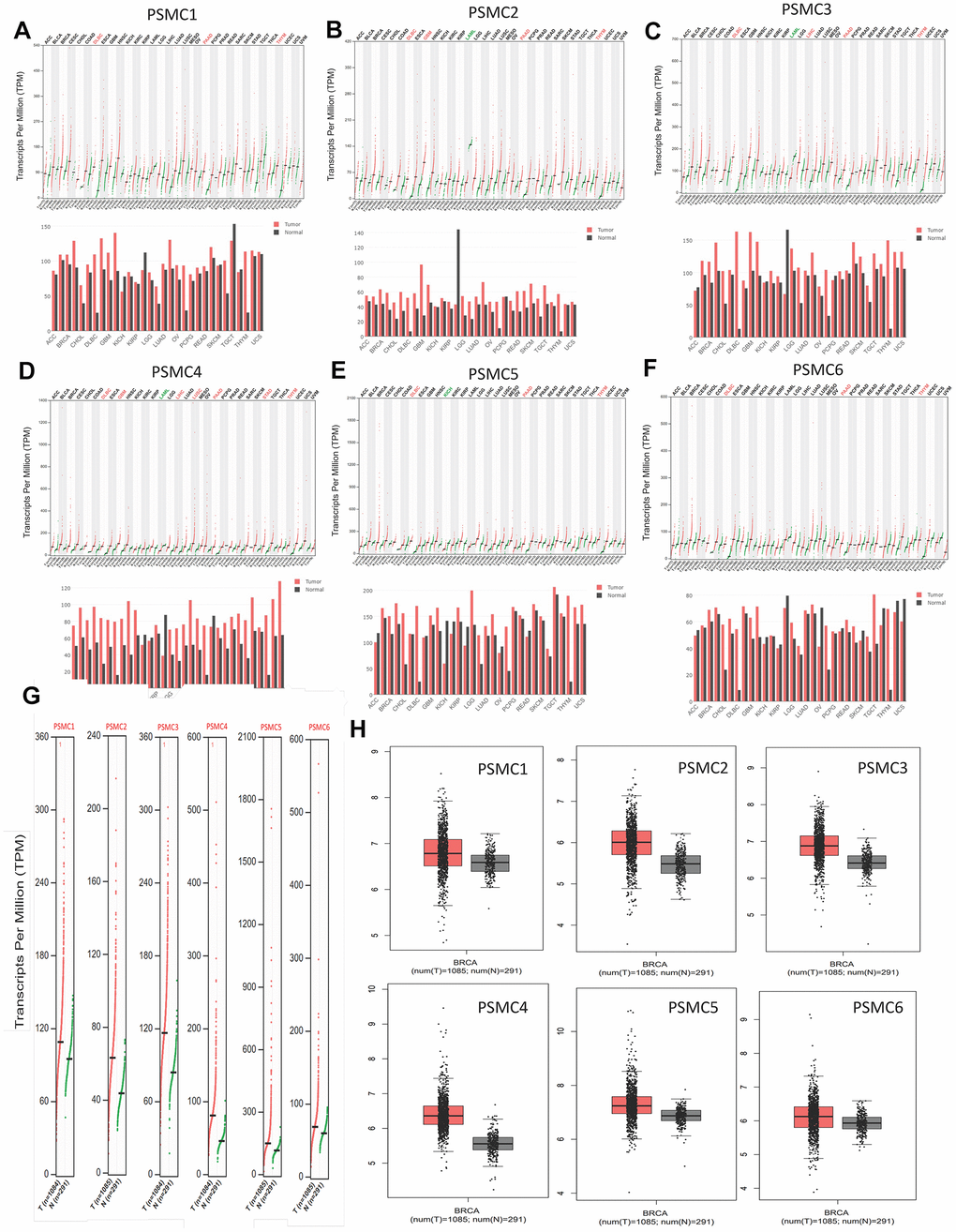 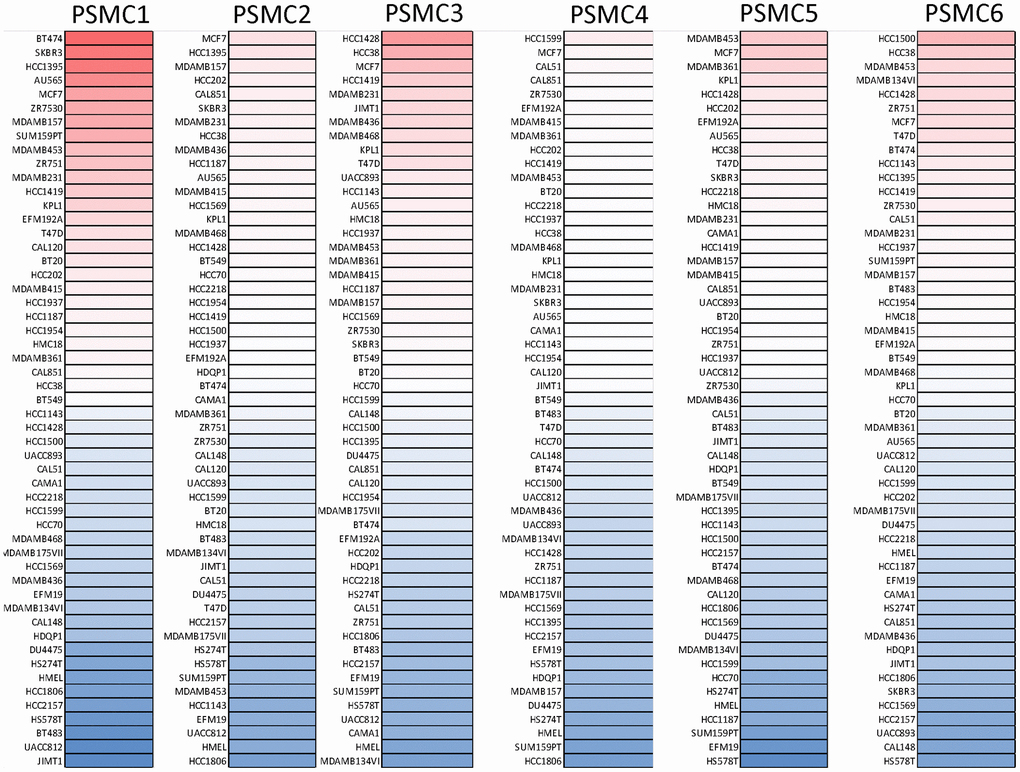 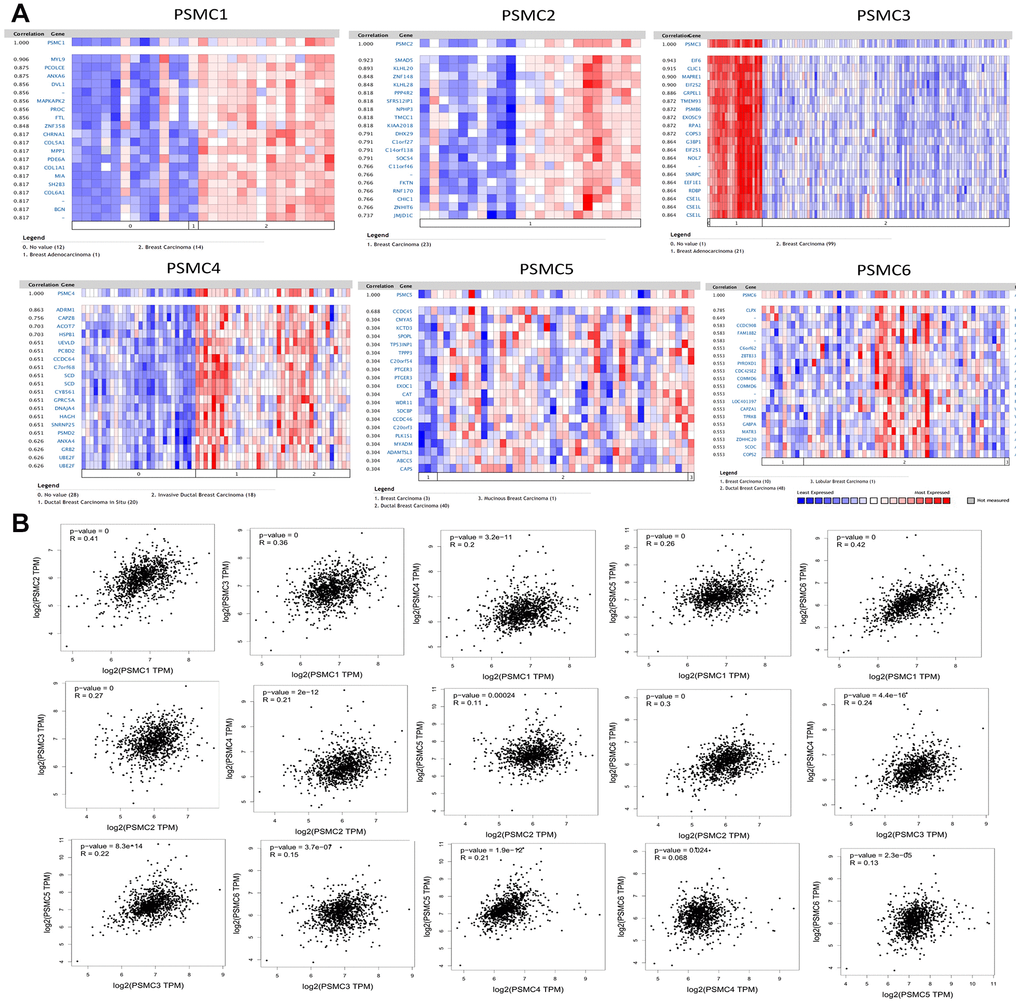 Since PSMC family genes were differentially expressed in samples from breast cancer patients, we next explored the potential roles of these genes in human breast cancer tissues, correlating their expressions with other potential biomarkers related to molecular subtypes of breast cancer. To determine expressions of PSMC family members and their clinical relevance, we analyzed protein expressions of individual PSMC members in clinical specimens from the Human Protein Atlas. The data demonstrated that PSMC1-6 presented moderate protein expressions, and PSMC2, PSMC3, and PSMC5 were highly expressed in certain clinical tissues from breast cancer specimens (Figure 5). The Kaplan–Meier plotter database also showed that PSMC1, PSMC3, PSMC4, PSMC5, and PSMC6 had high expression levels in breast cancer tissues may have oncogenic roles in breast cancer progression. High transcription levels of PSMC1, PSMC3, PSMC4, PSMC5, and PSMC6 predicted poor survival, whereas PSMC2 did not show the same pattern (Figure 6). 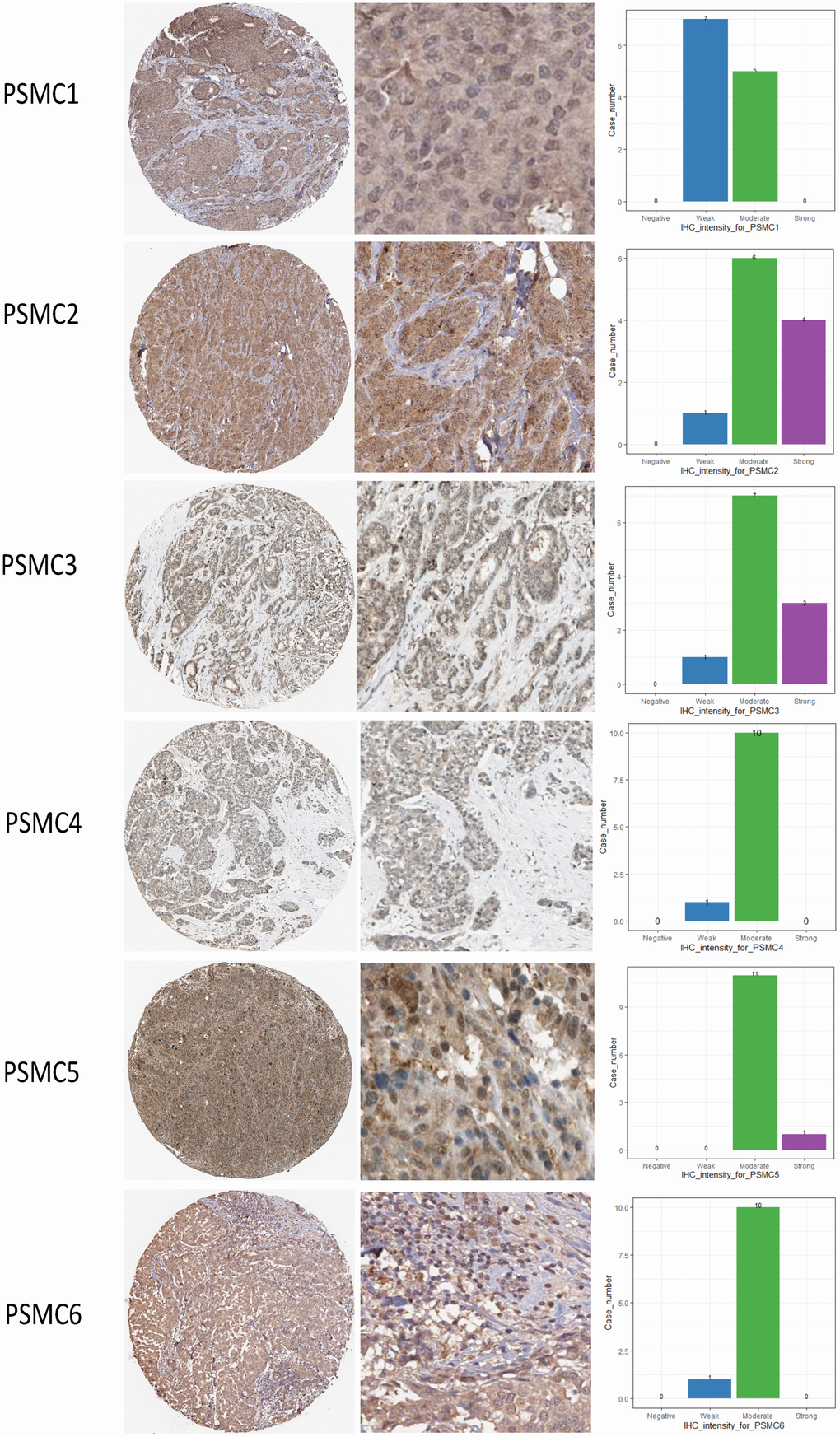 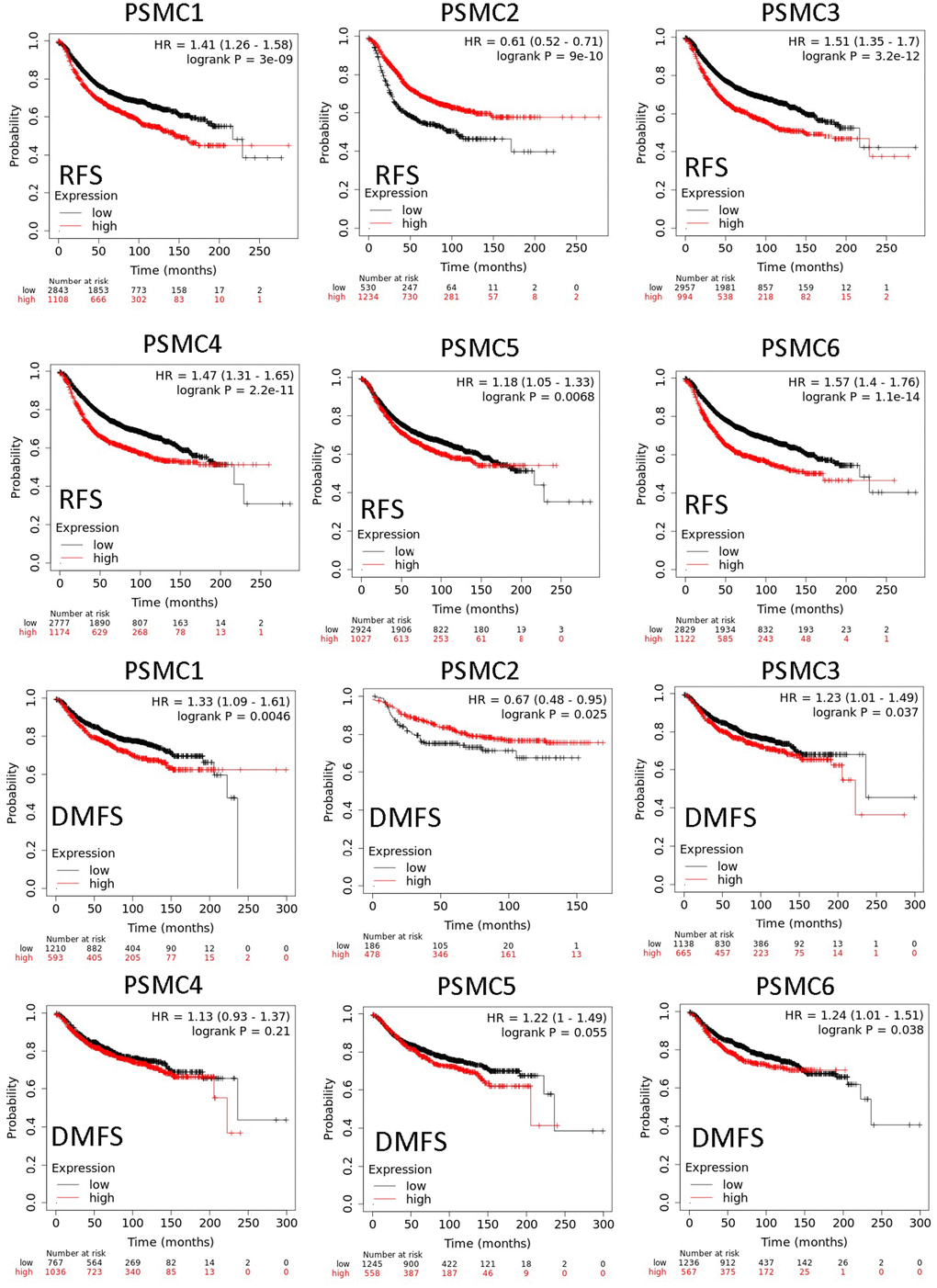 First, to explore the universally regulated pathways of the entire PSMC family, GeneGo Metacore was leveraged to investigate downstream networks according to coexpression patterns of PSMC genes. An analysis on the GeneGo Metacore platform demonstrated that genes coexpressed with the six PSMC genes participated in biological processes related to cancer progression. MetaCore can be used to construct downstream networks associated with biological processes from uploaded genes. By uploading PSMC coexpressed genes from the METABRIC database into the Metacore platform, we found that several cancer progression-related pathways were correlated with genes of the PSMC family (Supplementary Figures 4, 5 and Supplementary Table 2), including "Cytoskeleton remodeling_Regulation of actin cytoskeleton organization by the kinase effectors of Rho GTPases", "Cell cycle_Role of APC in cell cycle regulation", "Cell cycle_Chromosome condensation in prometaphase", "Cell cycle_Nucleocytoplasmic transport of CDK/Cyclins", and "Transcription_Role of heterochromatin protein 1 family in transcriptional silencing" (Figure 7). Next, the STRING platform was used to externally validate and search for potential protein-protein interactions (PPIs). The resulting network with a core cluster contained all of the genes associated with cancer progression and metastasis (Figure 8). 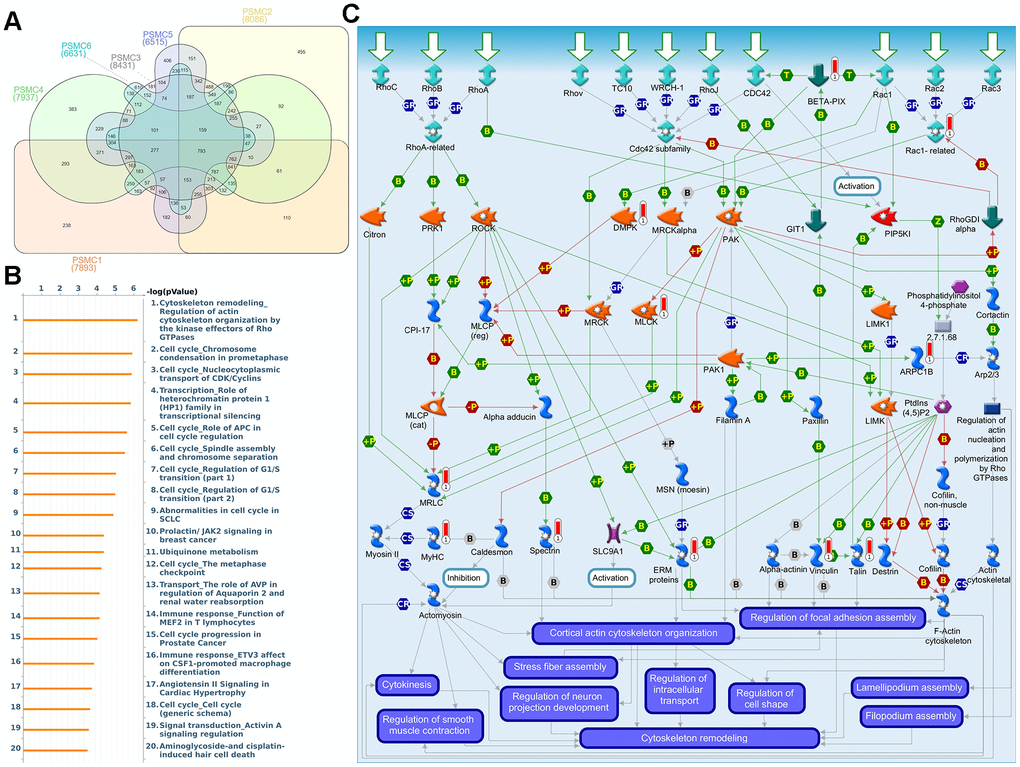 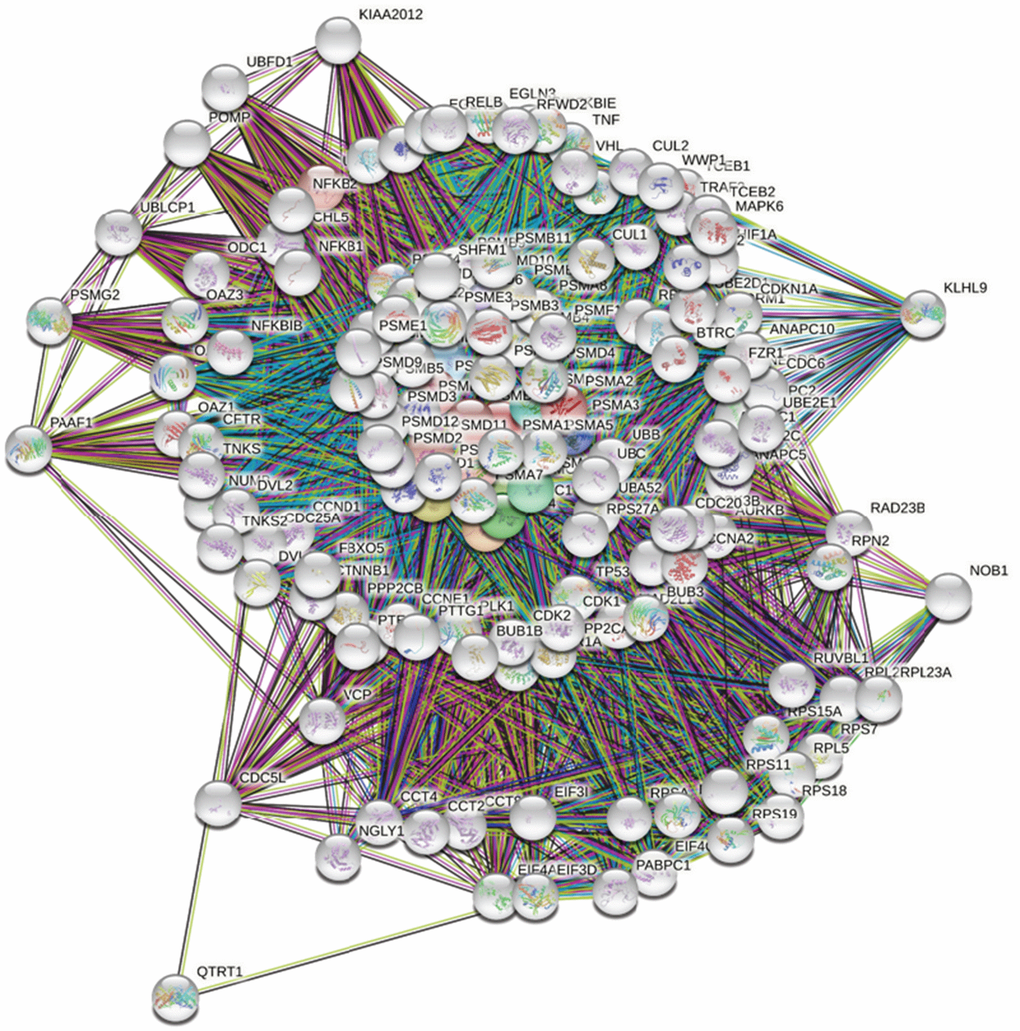 Figure 8. Network analysis of protein-protein interactions (PPIs) by the STRING platform. Genes associated with the proteasome 26S subunit, ATPase (PSMC) family were uploaded to the STRING platform to establish the network. Using k-means clustering, the network was further separated into different clusters.

Breast cancer has the highest prevalence rate compared to other types of cancer, particularly in females. Despite several years of extraordinary efforts to increase our knowledge of tumor biology and improve surgical treatments and chemotherapies, prognoses of advanced breast cancer patients have not improved [27–32]. Therefore, it is very important to investigate new diagnostic tools and novel biomarkers that can allow us to refine patient prognoses and investigate effective interventions.

Most genes of the PSMC family are upregulated in many types and subtypes of cancer. PSMC members were proven to be involved in tumor progression. For example, overexpression of PFN1 is associated with PSMC1 in the MDA-MB-231 triple-negative breast cancer cell line and may involve multiple mechanisms for cancer progression [33]. PSMC2 is highly expressed in pancreatic cancer, and PSMC2-knockdown significantly decreased cell proliferation. PSMC3 was identified as a crucial node in a PPI network in glioma cells [34]. PSMC4 and PSMC5 contribute to prostate tumorigenesis [35]. Additionally, PSMC4 was identified as one of the best biomarkers for endometrial cancer [36], and risk model construction revealed that it is also a prognostic marker for the same type of cancer [37]. PSMC5 acts as a novel regulator and is involved in the extracellular signal-regulated kinase 1/2 signaling pathway [38], and it was observed to have a relatively higher cytoplasmic expression pattern in most cancer types [39]. Both the PSMC6 and MAPK8 genes were upregulated in melanosis coli patients [40], and CRISPR Genome-Wide Screening demonstrated that the PSMC6 subunit is an important and sensitive target for bortezomib in multiple myeloma cells [41].

Since the roles of PSMC family members in breast cancer are poorly described, the present findings show their importance, by providing preliminary clues for prospective studies in breast cancer research. Findings from the current study are in line with previous reports on the roles of PSMC genes in cancer. Both mRNA and protein levels of PSMC2, PSMC3, PSMC4, PSMC5, and PSMC6 were significant in cancer tissues, and PSMC1, PSMC3, PSMC4, PSMC5, and PSMC6 overexpression was associated with poor prognoses of breast cancer patients. Meanwhile, to further clarify its role of PSMC family genes in pan-cancer, we also used GEPIA2 database to confirm that PSMC family genes had prognostic value in these integrated analyses (Supplementary Figure 12), as well as the PSMC family gene expressions in CCLE database (Supplementary Figure 13), The coexpression analysis revealed the positive correlative roles of PSMC family genes in cytoskeletal remodeling and CDK/cyclins, as well as cell cycle-related pathways and networks, which are consistent with previous studies. To some extent, this is the first report on both mRNA and protein expressions of the PSMC family in cancer cell lines and tissues, together with their associations with breast cancer patient survival.

Collectively, by integrating multiple high-throughput databases, our study uncovered that PSMC genes have prognostic and predictive value in breast cancer. To comprehensively provide a complete picture of the PSMC members not only in breast but also in other types and subtypes of cancer, our results can be used as hints for further examination of this family, and possibly they can serve as novel biomarkers and potential prognostic indicators in breast cancer.

Oncomine (https://www.oncomine.org/), a well-known high-throughput database for mRNA, was used to query expressions of PSMC family members [42]. In brief, each gene symbol of the PSMC family was used to search for expression levels in 20 types of cancer relative to matched normal-type samples. The search thresholds included a multiple of change of 2-fold, a p value of <0.01, and a gene ranking in the top 10%. The search output displayed the number of datasets that satisfied the above thresholds among all unique analyses. Upregulated genes in the generated dataset were displayed in a red gradient, decreasing with the top-ranked percentage, while downregulated genes in the generated dataset were presented in a blue gradient that decreased with the gene ranking. A gene could be upregulated in one dataset and downregulated in another depending on the search thresholds and study parameters. It is useful to examine discrepancies in gene expressions among studies, and plots of breast cancer subtypes were conducted with the ggpubr package in R environment as we previously described [43–46].

In addition to investigating mRNA expressions of PSMC family members in cancer tissues from the Oncomine database, we further searched for their expression levels in cell lines via the CCLE database (https://portals.broadinstitute.org/ccle) [47]. The CCLE is a high-throughput web-based tool with large numbers of human cancer cell lines (n = 1457) and unique datasets (n = 136,488). An RNA sequencing method was selected to search for expressions of PSMC family members in 60 breast cancer cell lines, and results were plotted with default settings as we previously described [48–50].

To acquire coexpression patterns of PSMC family members in the METABRIC and cBioPortal databases [51], a Venn diagram was created using InteractiVenn (http://www.interactivenn.net/). Then, 1588 coexpressed genes were further uploaded to Gene Ontology for pathway and network analyses using the MetaCore platform (https://portal.genego.com/), a functional annotation platform for exploring the biological significance behind a large list of genes. Statistical significance as the boundary criterion was set to p<0.05, as we previously described [52–54].

Search tool for the retrieval of interacting genes (STRING)

Together with investigating mRNA expression levels, we concomitantly performed searches for PPI networks of PSMC family members based on coexpressed genes using the STRING database. STRING has protein data comprising 24.6 million proteins in more than 5000 organisms, resulting in more than 2 billion interactions [55]. We selected the k-means clustering algorithm to classify target proteins into different clusters.

To further analyze the infiltration level of immune cells, we applied TIMER 2.0 (http://timer.comp-genomics.org) across 31 cancer types comprising of more 10,000 samples [59, 60]. The differences between normal and tumor in mRNA expression of PSMC genes were obtained using DiffExp module. We then selected B cells, T cells clusters including CD4+ and CD8+ together with neutrophils, macrophages, and dendritic cells for our analysis.