Clear cell renal cell carcinoma (ccRCC) is the most common type of malignant tumor in the kidney. With numbers of patients whose physical condition or tumor stage not suitable for radical surgery, they only have a narrow choice of using VEGF/mTOR targeted drugs to control their tumors, but ccRCC often shows resistance to these drugs. Therefore, identifying a new therapeutic target is of urgent necessity. In this study, for the first time, we concluded from bioinformatics analyses and in vitro research that FK506 binding protein 10 (FKBP10), together with its molecular partner Lysyl hydroxylase 2 (LH2/PLOD2), participate in the process of type I collagen synthesis in ccRCC via regulating crosslinking of pro-collagen chains. Our findings may provide a potential therapeutic target to treat ccRCC in the future.

Clear cell renal cell carcinoma (ccRCC) is the most lethal cancer in the urinary system [1]. Characterized by an asymptomatic disease course, the disease is often diagnosed late and survival prognosis is often poor [2]. According to investigations, males are almost 2 times vulnerable than females [3]. Due to lacking of biomarkers in the early diagnosis of renal cancer, nearly 20–30% of patients have found distant metastasis at the time of diagnosis [4]. Moreover, numbers of patients whose physical condition not suitable for radical surgery or with late-stage tumors have a narrow choice of using VEGF (vascular endothelial growth factor) or mTOR (target of rapamycin) targeted drugs to control their tumors. Although the development and application of VEGF/mTOR targeted drugs have extended the survival period of many patients, however, these existing targeted drugs often fail to show satisfactory efficacy because of drug resistance. In this circumstance, such patients must undergo cycles of drug resistance and finally be sensitive to no drug. Thus, identifying a new therapeutic target for ccRCC patients is of urgent necessity.

As the most abundant component of extracellular matrix (ECM), collagen has been found not only to be a physical barrier but also involved in tumor infiltration, angiogenesis, invasion, and migration [5]. The aberrantly regulated collagen is found in cancer at the levels of expression, modification, deposition, and degradation [6]. Of all the processes of collagen synthesis, crosslinking is a key step for pro-collagen chains to assemble into collagen triple helix. It has been reported that massive synthesis, thickening, and linear crosslinking facilitates metastasis of tumor cells [7].

FK506 binding protein 10 (FKBP10) and its collaborative protein lysyl hydroxylase 2 (LH2/PLOD2) are the most critical molecules in this collagen crosslinking process. FKBP10 is the gene that encodes the highly conserved 65-kDa protein FK506 binding protein (FKBP65). FKBPs are identified as chaperones and as peptidylprolyl isomerase (PPIase) involved in protein conformation folding during the process of protein transportation and secretion [8]. FKBP10 mainly localizes in the endoplasmic reticulum (ER). In ER, FKBP10 forms a complex with PLOD2, and promotes PLOD2 dimerization, which is crucial for PLOD2 enzymatic activity to hydroxylate Lys residues in the telopeptides of pro-collagen chains [9]. Defect of FKBP10 in fetus leads to collagen synthesis failure and therefore renders a congenital disease named Bruck Syndrome which is characterized by bone fragility and recurring bone fractures [10].

Recent studies revealed that FKBP10 was actively involved in cancers. Giorgio et al. reported that FKBP10 was negatively correlated with the survival of lung cancer patients [11], a similar result was also reported in gastric cancer [12]. A single in vitro study also found FKBP10 regulates cell cycle progression and invasion of ccRCC cell line [13]. However, the exact mechanism of FKBP10 in ccRCC remains unclear, its role in collagen synthesis and cancer cell proliferation needs to be elucidated.

In this study, we conclude that FKBP10, together with its collaborative protein PLOD2, are high expressed in ccRCC, and the two genes are negatively correlated with patients’ survival. FKBP10 is involved in the process of collagen biosynthesis in ccRCC cell line. Down-regulation of FKBP10 induces ER stress in ccRCC cell line. Based on the results, we further hypothesize that FKBP10 influences proliferation of ccRCC, reduced collagen crosslinking induced by targeted down-regulation of FKBP10 may sensitize ccRCC to adjuvant therapies.

The difference of FKBP10, PLOD2 and pro-collagen I chains in ccRCC and normal kidney tissues 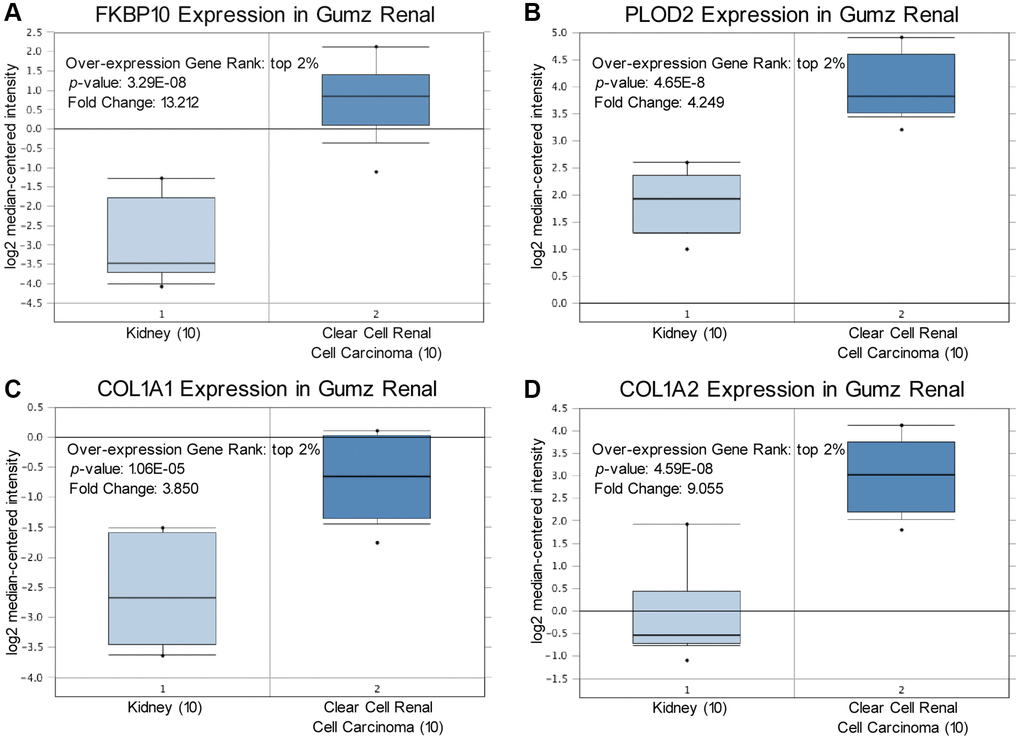 FKBP10 and PLOD2 are strongly stained in IHC analysis

As shown in Figure 2, IHC data obtained from the public database HPA [16] gave us a direct visual result that FBP10 and PLOD2 displayed a strongly stained pattern in ccRCC tissues (Figure 2A, 2B), in contrast, normal kidney tissues have a relatively low level of FKBP10 and PLOD2 (Figure 2C, 2D). 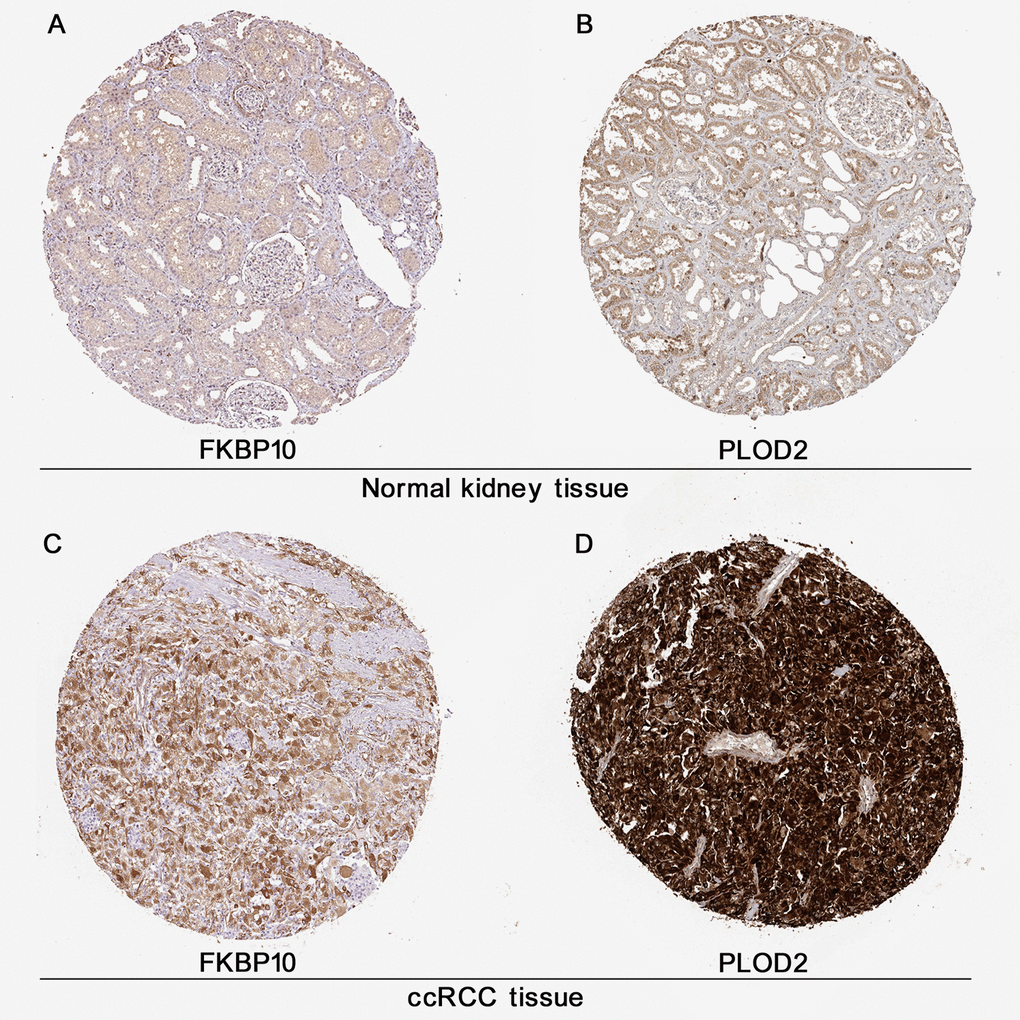 The prognostic values of FKBP10 in ccRCC

Next, we investigated prognosis data of FKBP10 and PLOD2 in ccRCC patients. Kaplan-Meier plotter [17] was employed in this section. As shown in Figure 3A and 3B, the Kaplan-Meier plotter calculated that higher mRNA expression of FKBP10 and PLOD2 were significantly associated with poor ccRCC patients’ Overall Survival (OS). Further survival analysis of different gender subgroups using UALCAN showed that regardless of different gender, patients with higher FKBP10 and PLOD2 mRNA expression levels presented shorter OS than those with lower levels (Figure 3C and 3D). 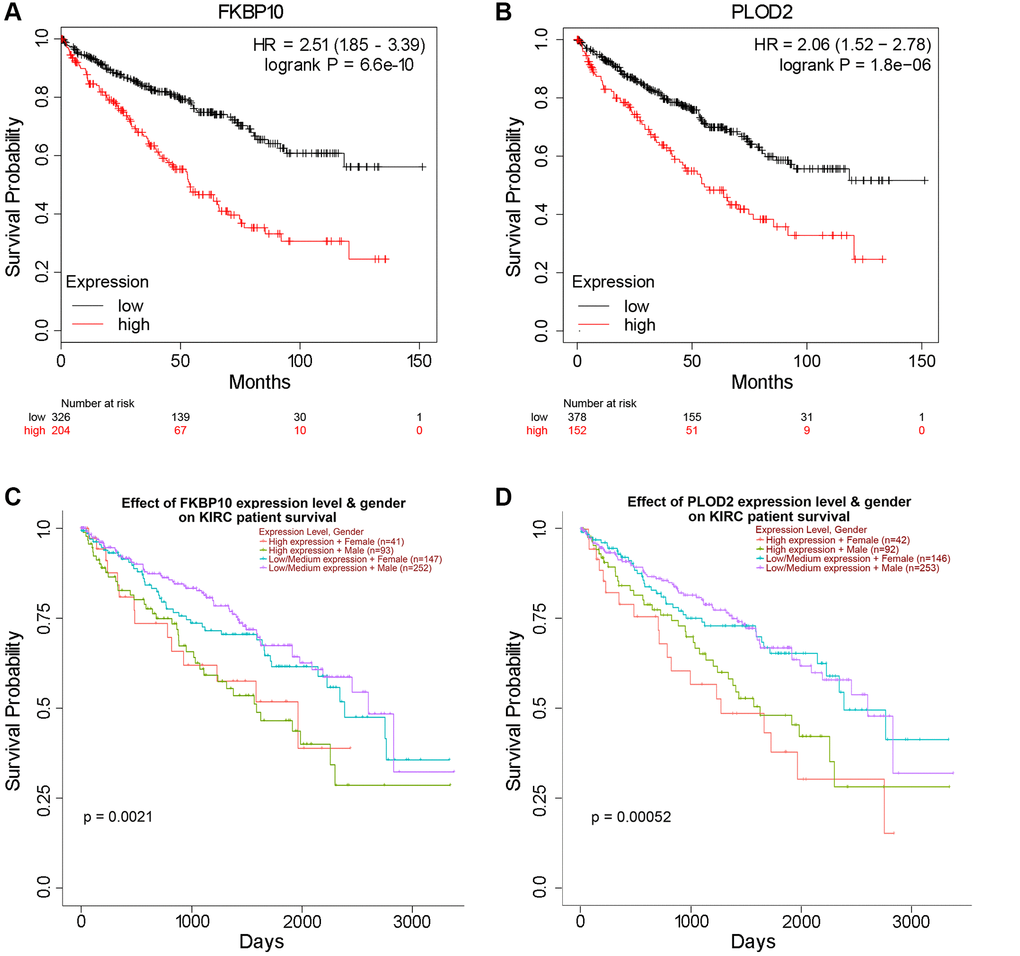 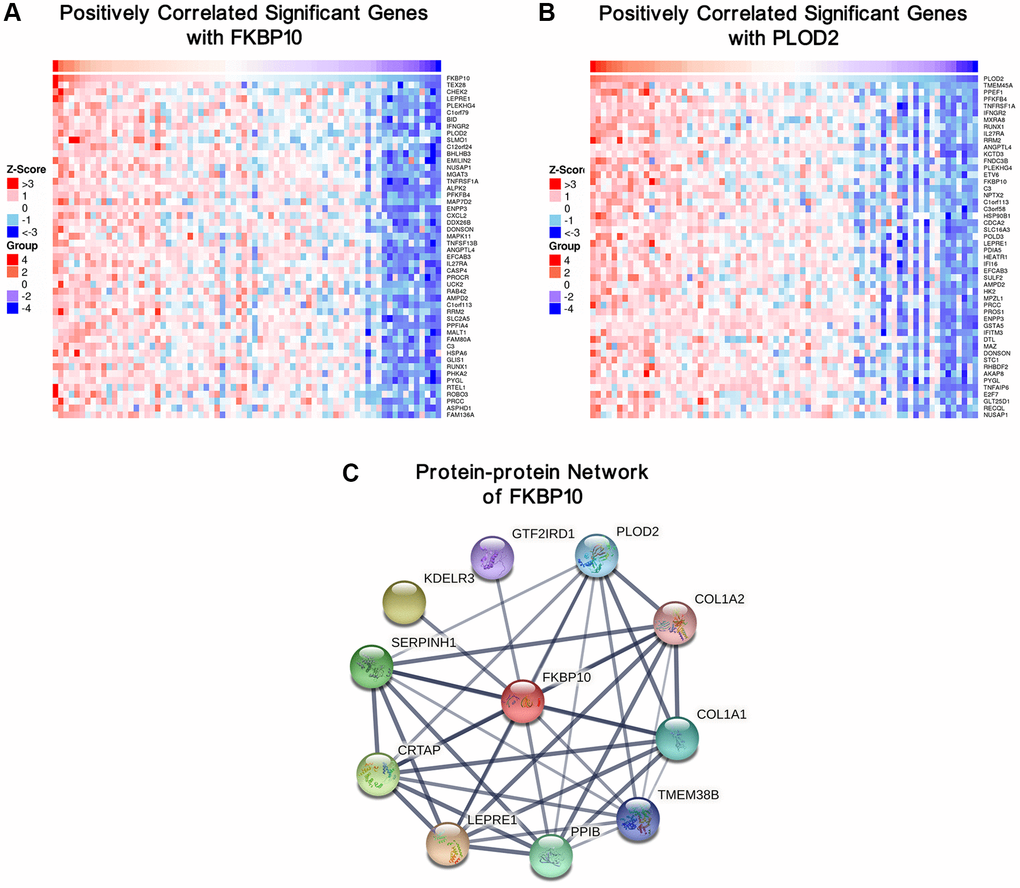 To explore the biological function partners of FKBP10, we used String to construct and analyze the protein-protein interaction (PPI) network via public database String [18]. The result indicates that PLOD2, COL1A1, COL1A2 list among the top 10 proteins which interact with FKBP10 (genes combined score > 0.7) (Figure 4C). 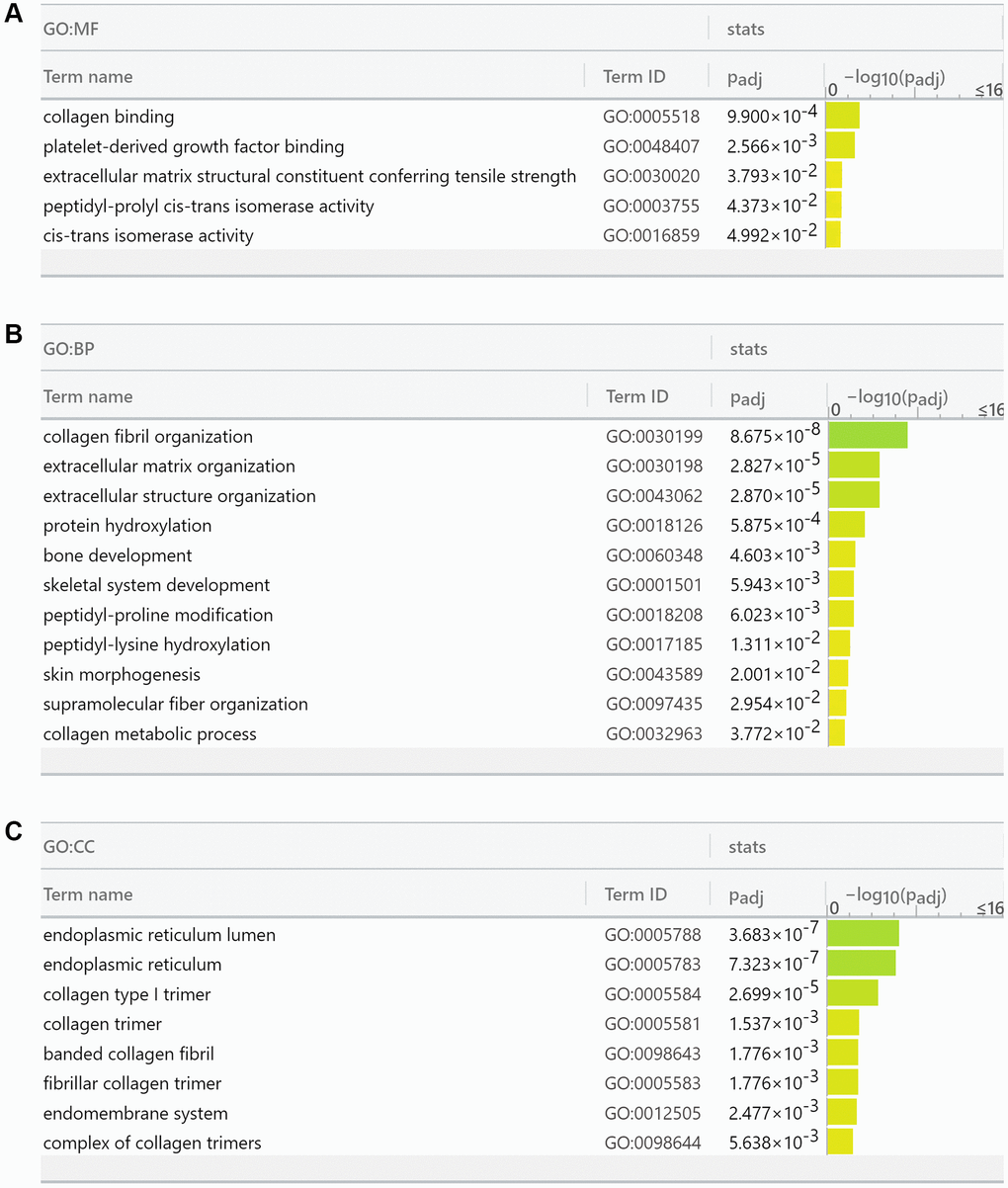 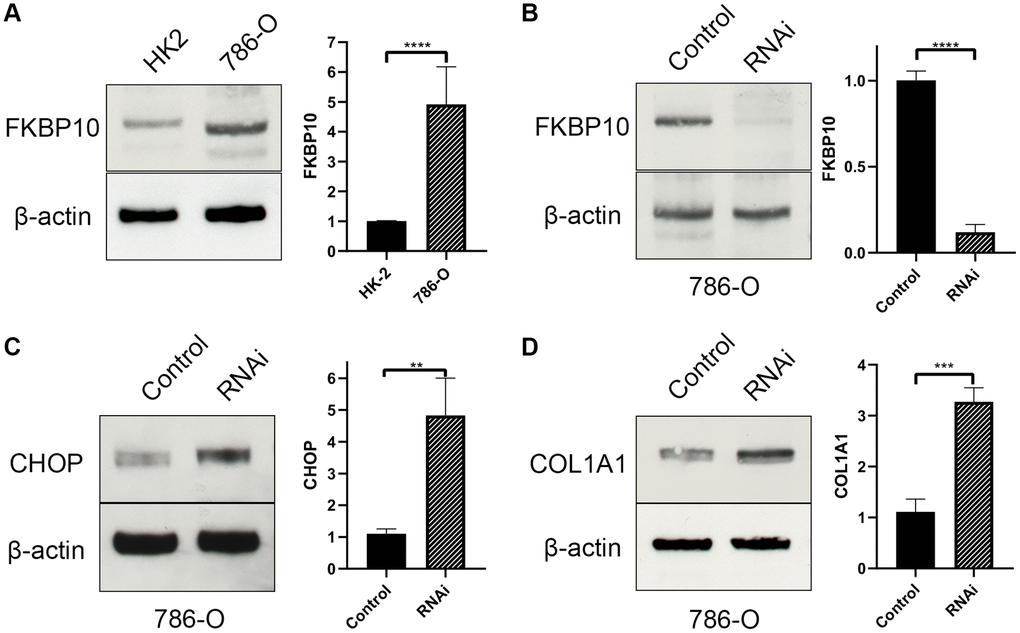 Down-regulation of FKBP10 brings about the rise in ER stress

Our study identified FKBP10 as a promising therapeutic target in ccRCC based on bioinformatics analyses by inquiring various public databases and in vitro research. Initially, we found FKBP10 and its molecular partner PLOD2, together with their potential substrate COL1A1 and COL1A2 presented a high-expression profile in ccRCC patients using a database that analyzes GEO datasets. To achieve a direct visual comprehension of FKBP10 and PLOD2 protein levels in ccRCC, IHC data from the HPA database were employed. IHC data were consistent with mRNA expression data that ccRCC expressed high level of FKBP10 and PLOD2. Besides, patients with higher FKBP10 and PLOD2 levels inclined to have poorer OS and RFS than the ones with lower expression. No obvious OS differences were observed between different genders, indicating that FKBP10 has the potential to be a therapeutic target for all genders. Biological function analyses revealed FKBP10 and its correlated genes participate in various biological processes and pathways, especially in the processes related to collagen modification, indicating FKBP10 did actively participate in collagen synthesis in ccRCC. Finally, in vitro experiments verified that FKBP10 was aberrantly high expressed in ccRCC cell lines and a following RNA interference of FKBP10 presented accumulation of pro-collagen I and rise in ER stress.

Being the most abundant component of the extracellular matrix, collagens act more as a progression facilitator for malignant tumors than just a protective physical barrier. As reported, collagen gets involved in linearized deposition, hypoxia response, tumor angiogenesis, tension derived epithelial–mesenchymal transition of malignant tumor [7]. Almost all these processes require remodeling or rearranging of collagen fibers, which relies on frequent crosslinking and re-crosslinking of collagen chains.

FKBP10 was first thought to be involved in diseases such as idiopathic pulmonary fibrosis [20] and osteogenesis imperfecta [21]. Interestingly, almost all previous studies proved that FKBP10 was greatly involved in collagen synthesis. In recent years, researchers turn to elucidate its role in cancers such as gastric cancer [12], prostate cancer [22], and ovarian cancer [23]. Ge et al. even gave a glimpse into the phenotype effect of FKBP10 in ccRCC at cell line level and a small number of samples [13]. Most cancers just mentioned presented an FKBP10 positively correlated behavior, i.e., high expression level of FKBP10 promotes cancer and predicts poor prognosis [12, 13, 22, 24].

Here we postulate a mechanism that FKBP10, together with its collaborative molecule PLOD2, are engaged in the process of massively synthesizing and secreting type I collagen from ER in ccRCC. FKBP10-dependent PLOD2 dimer stabilization may be indispensable for type I collagen crosslinking [9]. Telopeptide lysyl hydroxylation mediated by FKBP10 and PLOD2 is critically important for proper crosslinking and polymerization of collagen I fibrils [25]. This high activity leads to dynamical homeostasis in the process of protein precursors folding into correct conformation. Once this fragile homeostasis gets imbalanced, such as FKBP10 mutates defectively or being inhibited by targeted drugs, un-crosslinked pro-collagen I will accumulate. These accumulated protein precursors brought about high ER stress.

ER stress emerges as a novel cancer treatment mechanism in the recent decade based on the theory that cells tend to undergo apoptosis when ER proteins, including FKBP10, fail to correctly fold protein precursors to be synthesized afterwards [26] such as pro-collagen. It has been proved by a study that pro-collagen I appeared to aggregate in FKBP10 null cells, then ER stress induced by pro-collagen I bursts [21, 27]. Under this stressed circumstance, cells tend to proceed apoptosis [28].

In conclusion, we analyzed the expression and prognostic value of FKBP10 in ccRCC in this study. Our results indicate that FKBP10 and its collaborative molecule PLOD2 are involved in crosslinking of type I collagen in ccRCC. Silencing of FKBP10 interrupts the crosslinking and brings about high ER stress. With the ER-stressed apoptotic tending status, cancer cell may be vulnerable to physio-chemical environment changes, such as ionizing radiation beam, chemical therapy drugs or radiofrequency ablation. The high FKBP10 expression could also serve as a prognosis predictor. Furthermore, FKBP10 may be a candidate therapeutic target for ccRCC patients or other cancer types with high FKBP10 level.

ONCOMINE (https://www.oncomine.org), an online cancer microarray database, was used to analyze the transcription level of FKBP10 in ccRCC. The mRNA expression of FKBP10, PLOD2, COL1A1 and COL1A2 in clinical cancer samples were compared with that in normal people, using a Students’ t-test to generate a p-value. The cut-off of p-value and fold change were set as 0.01 and 1.5, respectively.

The LinkedOmics database (http://www.linkedomics.org) is a web-based platform for analyzing 32 TCGA cancer-associated multi-dimensional datasets. LinkedOmics was used to study genes differentially expressed in correlation with FKBP10 and PLOD2 in TCGA ccRCC data (n = 533). Results were analyzed statistically using the Pearson correlation test. All results were graphically graphed in volcano plots and heat maps.

String (https://string-db.org/) To further investigate the biological function of FKBP10 in ccRCC, we analyzed the possible interactions of FKBP10 using a protein-protein interaction (PPI) network. An interaction score of 0.7 was set as a cut-off value.

Y.Z., Y.Y. and R.A. conceived and designed the study. Y.Z., Y.Y., S.L. and L.Y. performed the experiments. Y.Z., L.Y. and C.S. proceeded all the figures. Y.Z. and Y.Y. wrote the paper. R.A. provided financial support and supervised the whole study. All the authors reviewed and edited the manuscript.

This work was supported by the National Natural Science Foundation of China (NFSC, No. 81370803).