Copyright: © 2021 Wei et al. This is an open access article distributed under the terms of the Creative Commons Attribution License (CC BY 3.0), which permits unrestricted use, distribution, and reproduction in any medium, provided the original author and source are credited.

The anticancer effect of zinc oxide nanoparticles (ZnO NPs) largely relies on cellular responses such as alteration of gene expression. Although ZnO NPs have been reported to induce transcriptional changes, the potential of ZnO NPs to affect cellular translatome remains largely unknown. Using ribosome profiling, we demonstrated that the transcription of 78 genes and the translation of 1,448 genes are affected during one hour of ZnO NPs exposure in A549 human lung cancer cells. The mitogen-activated protein kinase (MAPK) pathway is up-regulated upon ZnO NP treatment. The upstream open reading frame (uORF) plays a pervasive role in the induction of up-regulated genes, including TLNRD1 and CCNB1IP1. Knockdown of TLNRD1 or CCNB1IP1 reduces ZnO NP-induced cytotoxicity. Together, our study characterizes the landscape of translational alteration under ZnO NPs treatment and provides potential targets to augment the anticancer effect of ZnO NPs.

Nanotechnology has made remarkable progress in recent years. Due to their unique physical and chemical characteristics, nanoparticles (NPs) are progressively being used for various industrial/household applications as well as clinical purposes [1]. As one of the most widely used nanomaterials, ZnO nanoparticles (ZnO NPs) have been proven to be effective in tumor treatment both in vitro and in vivo [2–4]. Importantly, it was reported that cancer cells are more sensitive to ZnO NPs treatment than normal cells [4]. Oxidative stress is the leading cause of ZnO NP-induced cancer cell toxicity [1]. In response to ZnO NP-induced oxidative stress, cells alter gene expression, which regulates cytotoxicity of ZnO NPs. mRNA-sequencing (mRNA-seq) studies have provided insights into the transcriptional responses to ZnO NPs [5]. However, gene expression is controlled at both transcriptional level and translational level. The changes in mRNA abundance are not necessarily predictive of changes at the protein level.

Evidence has indicated that ZnO NPs affect mRNA translation. In response to ZnO NPs exposure, mTORC1 signaling is inhibited, which averts eIF4F complex establishment and inhibits the rate of translation initiation [6]. ZnO NPs also phosphorylate the serine 51 of eIF2α [7]. eIF2α phosphorylation inhibits the GTP/GDP exchange activity of eIF2B, thus inhibiting the recycling of eIF2 and global translation [8, 9]. In addition to the inhibition of global protein synthesis, eIF2α phosphorylation enables the translation of stress-responsive genes such as activating transcription factor 4 (ATF4) and ATF5 [10, 11]. However, due to the lack of detecting methods, our understanding of ZnO NPs-induced translational changes, especially the up-regulated genes, remains poor.

Ribosome profiling or Ribo-seq, on account of deep sequencing of ribosome-protected mRNA fragments (RPFs), has proven to be effective in determining the translated sequences and quantifying the translational level of genes across the entire transcriptome [12]. Coupled with regular mRNA-seq, Ribo-seq provides data on the real mRNA sequences that are being translated, the characteristics of reading frames, and ribosomal density at each location. Ribo-seq also evaluates translational regulation by examining translation efficiency (TE), which is the quantity of footprints normalized to mRNA level. We reasoned that ribosome profiling is a powerful tool for the study of mRNA translational regulation during ZnO NPs exposure, facilitating the development of more effective cancer therapeutics based on ZnO NPs.

In this study, we systematically evaluated translational changes after ZnO NPs treatment in A549 cells by using ribosome profiling. The translational signature provides new insights for understanding the biological effects of ZnO NPs and potential targets for augmenting the anticancer effect of ZnO NPs.

Lung cancer cells (A549) were cultured in DMEM supplemented with 10% fetal bovine serum (Thermo Fisher Scientific, United States). Cells were cultured at 37°C with 5% CO2. For ZnO NPs treatment, cells were seeded in 6-well plates. After 24 hours of culture, cells were treated with ZnO NPs at different concentrations for the indicated time.

Real-time quantitative PCR analysis (RT-qPCR) was performed using TB Green Premix Ex Taq II (Takara, Japan). The related mRNA level was normalized to the β-actin mRNA level. The 2−ΔΔCt method was used to analyze the data [13]. Sequences of all the primers used for PCR amplification are listed in Supplementary Table 1.

A549 cells plated in a 96-well plate were treated with ZnO NPs for 24 hours. 10 μl of CCK8 reagent (Dojindo Laboratory, Japan) was added to each well and the cells were incubated for 2 hours at 37°C. The optical density at 450 nm was measured by using a VarioskanFlash (Thermo Scientific, United States).

After ZnO NPs treatment for 24 hours, both floating and attached cells were harvested. Cells were stained with 5 μl of annexin V-FITC and PI (Beyotime, China) for 5 minutes in the dark and analyzed by flow cytometry (Beckman Coulter, United States).

Total ROS was detected by using a fluorescent probe 2′, 7′-dichlorofluorescein-diacetate (DCFH-DA) (Beyotime, China). Briefly, A549 cells treated with or without ZnO NPs were incubated with 10 μM of DCFH-DA at 37°C for 30 minutes. Cells were harvested in 0.5 ml PBS and the fluorescence intensity was monitored with flow cytometry.

The 3’ adaptors and low-quality bases were trimmed by Cutadapt3. Reads with length < 20 nucleotides were excluded. The remaining reads were mapped to the human transcriptome using Bowtie. For read alignment, a maximum of two mismatches was permitted. For Ribo-seq, the reads mapped to CDS were used to calculate the RPKM values for translation levels. For RNA-seq, the reads mapped to the entire transcript were used to calculated RPKM. Translation efficiency (TE) was defined as the ratio of FPKM of Ribo-seq over FPKM of RNA-seq.

The biological effects of ZnO NPs vary due to their size and shape. Therefore, we first used a transmission electron microscope to determine the size of ZnO NPs. Data revealed that the ZnO NPs used in our study were spheroid in shape with particle sizes ranging between 23 nm and 55 nm. The average size of ZnO NPs was 37.8 ± 7.0 nm (Figure 1A). 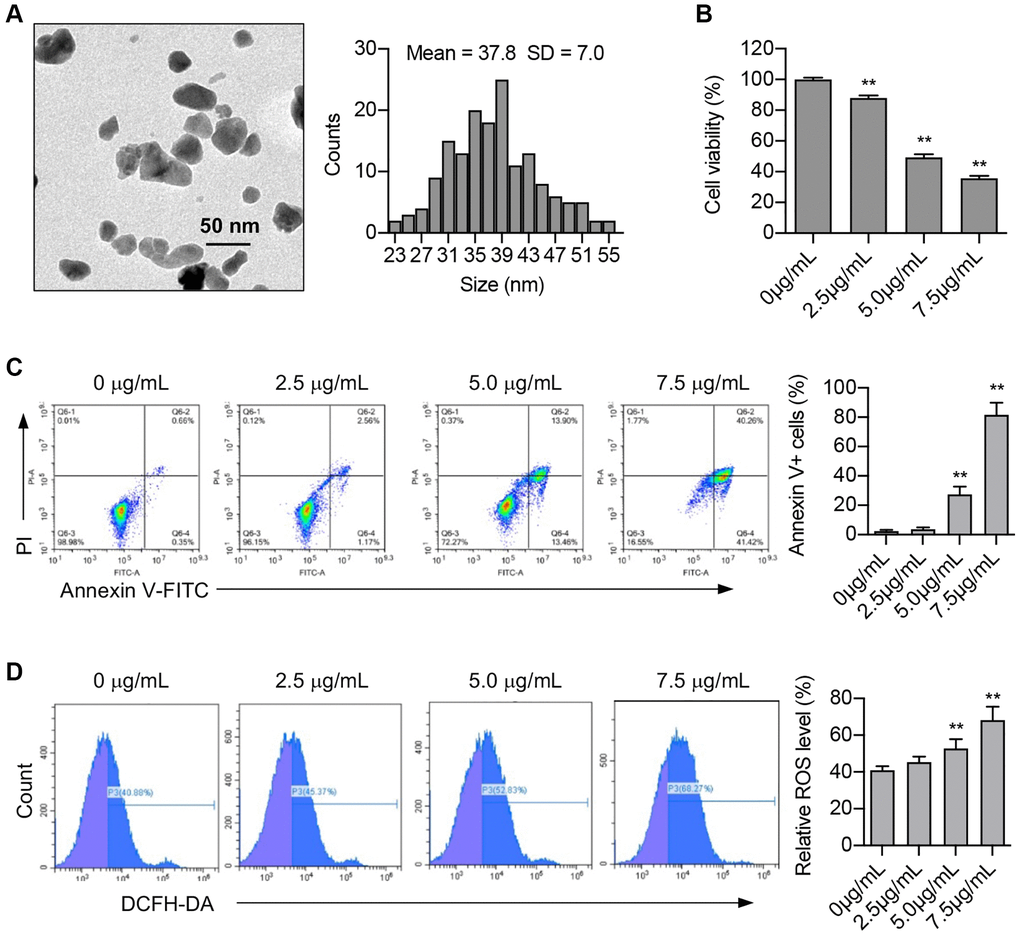 Studies have demonstrated the cytotoxic effect of ZnO NPs on a range of cancer cells. Our study revealed that ZnO NPs caused an obvious decrease in A549 cell viability at the concentration of 2.5 μg/mL. Moreover, ZnO NPs decreased cell viability in a dose-dependent manner (Figure 1B). Apoptosis is one of the main causes of decreased cell viability. Our study showed that the number of Annexin V-positive cells significantly increased at the concentration of 5.0 μg/mL, and further increased at 7.5 μg/mL, indicating that ZnO NPs treatment induces apoptosis (Figure 1C).

Nanoparticles have been reported to induce the production of reactive oxidative stress (ROS). We determined cellular ROS levels treated with different concentrations (0, 2.5, 5, and 7.5 μg/mL) of ZnO NPs for 6 hours. The results showed that 5 μg/mL of ZnO NPs indeed caused a significant increase in ROS production, suggesting that ROS might participate in cellular responses to ZnO NPs treatment (Figure 1D).

Figure 2. ZnO NPs repress global protein synthesis. (A) Measurement of the newly synthesized proteins with different treatments using puromycin labeling. Cells were treated with 5 μg/mL of ZnO NPs. (B) Polysome profiles of A549 cells treated without or with ZnO NPs (5 μg/mL) or together with NAC. The ratio of polysome/monosome was calculated. (C) Immunoblot analysis of A549 cells without or with ZnO NPs (5 μg/mL) treatment or together with NAC. 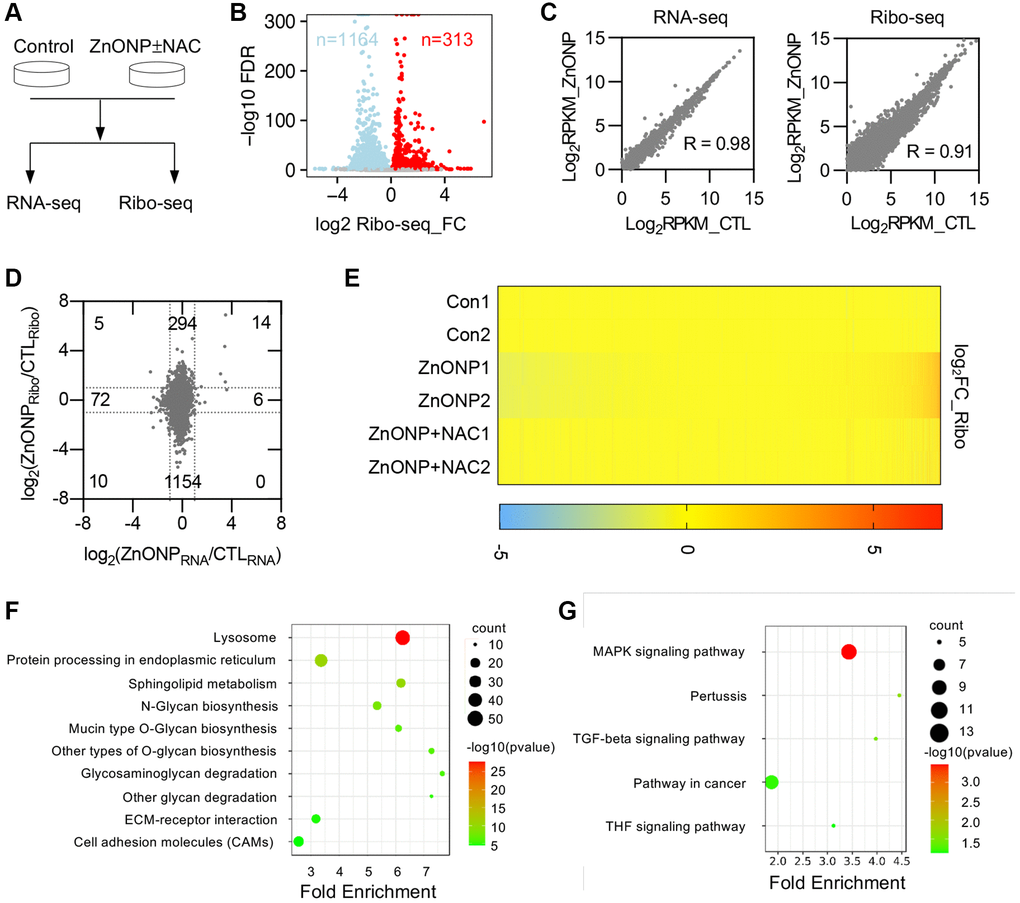 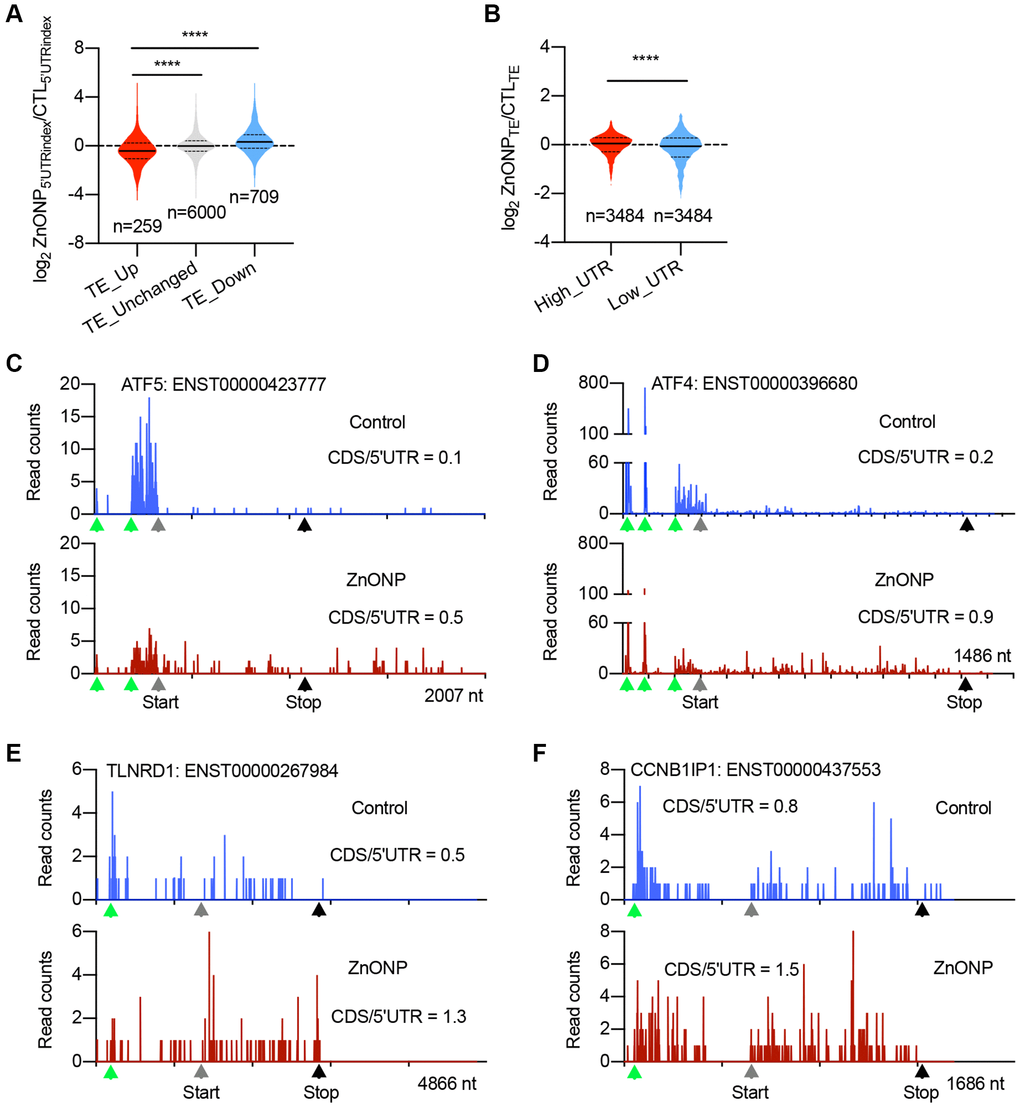 Figure 4. uORFs regulate the expression of upregulated genes. (A) Violin plots showing the RPFs of 5′UTR in translationally (TE) up-regulated, unchanged, and down-regulated genes after ZnO NPs treatment. The upper and lower quartiles and the median are shown for each group. ****P < 0.001, one-way ANOVA. (B) Violin plots showing the translation efficiency change after ZnO NPs treatment between high-UTR and low-UTR genes. The upper and lower quartiles and the median are indicated for each group. ****P < 0.001, t-test. (C–F) The indicated mRNAs whose ribosome densities increase at CDS and decrease at 5′UTR during ZnO NPs treatment. Ribosome density in ATF5 (C), ATF4 (D), TLNRD1 (E), and CCNB1IP1 (F) mRNAs are shown. The ratio of CDS RPFs to 5′UTR RPFs was indicated. The green triangles indicate the predicated start codons of uORF. The grey triangles indicate the start codons of CDS. The black triangles indicate the stop codons of CDS. 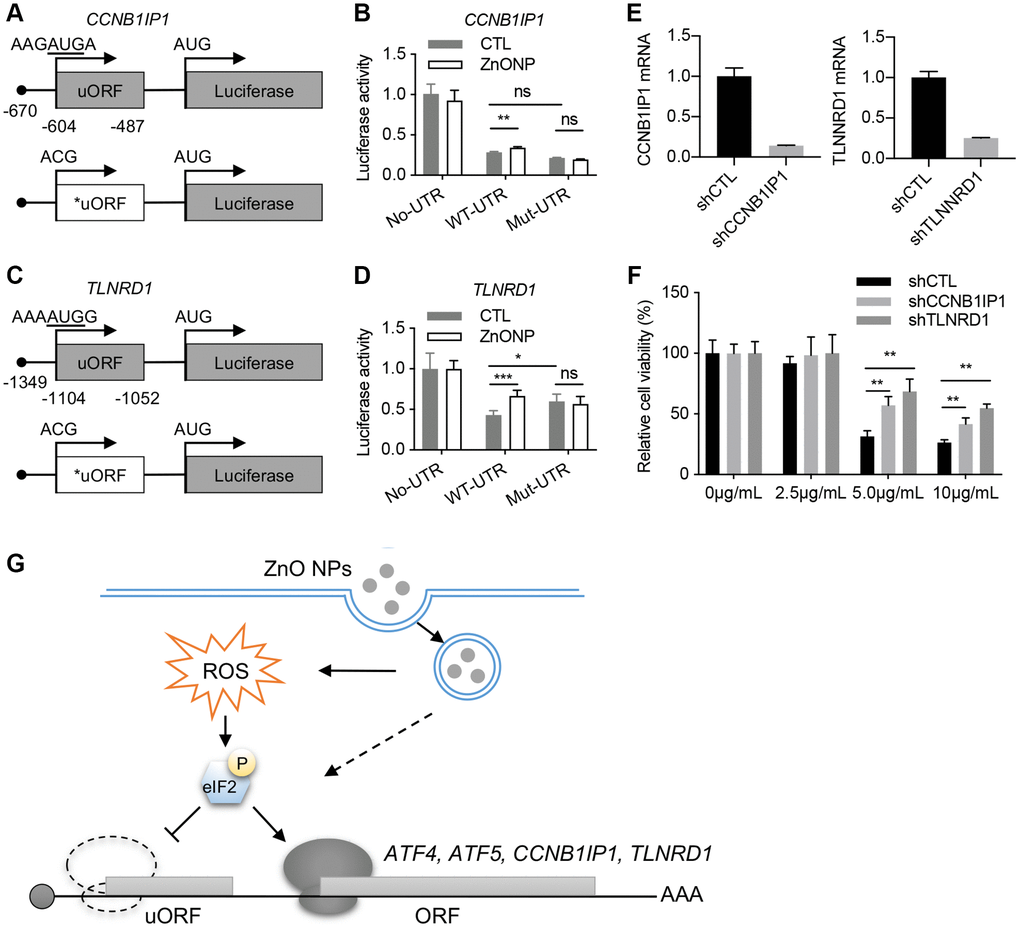 ZnO NPs induce cytotoxicity in cancer cells largely through ROS [2–4], while whether cancer cells undergo survival or enter one of the cell death pathways depends on the intensity of oxidative stress and cellular responses [16]. Translational response does not need to produce new mRNA, therefore providing a more rapid way to alter gene expression than transcriptional response [17]. Our data revealed that only 61 genes are altered at the transcriptional level during one hour of ZnO NPs treatment, while approximately 1,448 genes are affected at the translational level. We performed Gene Set Enrichment Analysis (GSEA) analysis and found that ROS pathway is not enriched in ZnO NPs-dysregulated translatome (P = 0.989, data not shown), implying that ROS pathway components are not regulated at the translational level. The up-regulated genes were enriched in the MAPK pathway. Many of these genes are vital for cell-fate determination. Elucidating the function of these ZnO NPs-responsive genes may provide potential targets to augment the anticancer effect of ZnO NPs.

Recent ribosome profiling data showed that ~50% of human transcripts have at least one uORF. uORFs play an important role in regulating stress-induced translation [23–25]. Our ribosome profiling data clearly identified ATF5 and ATF4, two well-known uORF-regulating genes as the top genes responsive to ZnO NPs. In addition, we also identified some novel uORF-regulated genes such as TLNRD1 and CCNB1IP1 (Figure 5G). Based on the current reinitiation model, ATF4 protein production is repressed due to the ribosome dissociation caused by CDS-overlapping uORFs under normal conditions [26]. Under stress conditions, eIF2α phosphorylation reduces the eIF2/GFP/Met-tRNAMet ternary complex, avoiding the ribosomes to scan the inhibitory uORFs and promoting translation from the CDS of ATF4 [27]. Since our data indicated eIF2α phosphorylation in response to ZnO NPs treatment, the delayed translation reinitiation may also contribute to the induction of TLNRD1 and CCNB1IP1.

Under normal conditions, the translation of uORF inhibits the translation of main ORF (mORF). Therefore, mutation of uORF is supposed to induce the upregulation of mORF translation. However, the impact of uORF on translation depends on several variables, such as the context in which uORF AUG is located, the length of the uORF, the secondary structure of the uORF, and the distance between 5′ cap and uORF, et al. [28]. Strong uAUG context and increased distance from the cap induce greater translation inhibition. In our experiments, mutation of TLNRD1 uORF dramatically upregulates Luc translation (Figure 5D), while mutation of CCNB1IP1 uORF did not induce significant change (Figure 5B). In line, the response of CCNB1IP1 uORF to ZnONPs treatment was also slight compare to TLNRD1 uORF (Figure 5B and 5D). By analyzing the sequence of the two uORFs, we found that CCNB1IP1 uAUG is less optimal than TLNRD1 uAUG (Figure 5A and 5C). Moreover, cap-to-uORF distance of CCNB1IP1 is shorter than that of TLNRD1 (Figure 5A and 5C). These features may explain the finding that CCNB1IP1 uORF is less inhibitory than TLNRD1 uORF.