Copyright: © 2021 Zheng et al. This is an open access article distributed under the terms of the Creative Commons Attribution License (CC BY 3.0), which permits unrestricted use, distribution, and reproduction in any medium, provided the original author and source are credited.

In this study, we examined whether and how miR-545 modulates ferroptosis in colorectal cancer (CRC). HT-29 and HCT-116 human CRC cell viability was examined using a CCK-8 assay and malondialdehyde (MDA) and Fe2+ levels were measured after treatment with the ferroptosis inducers Eradicator of Ras and ST (erastin) and Ras selective lethal 3 (RSL3) with or without miR-545 overexpression or knockdown vectors. Our results demonstrate that miR-545 overexpression inhibited, while miR-545 knockdown further increased, erastin and RSL3-induced upregulation of MDA, reactive oxygen species (ROS), and Fe2+ levels. Similarly, miR-545 overexpression partially reversed, while miR-545 knockdown enhanced, the erastin and RSL3-induced reduction in HT-29 and HCT-116 cell survival rates. Transferrin (TF) was identified as a target gene of miR-545. To determine whether miR-545 suppresses ferroptosis via TF, we overexpressed TF in HT-29 and HCT-116 cells. We found that TF overexpression blocked miR-545-induced changes in ROS, MDA, and Fe2+ levels in HT-29 and HCT-116 cells, thereby inducing CRC cell death. An in vivo assay showed that inhibition of miR-545 decreased tumor growth in nude mice treated with erastin. Together, these findings indicate that miR-545 promotes CRC cell survival by suppressing TF.

Colorectal cancer (CRC) is one of the most common digestive tract cancers, and its incidence rate is increasing year by year [1]. Multiple genetic and environmental factors modulate the occurrence and development of CRC [2, 3]. However, the pathogenesis of CRC remains largely unclear, and additional studies are needed to identify key molecules involved in the growth and metastasis of CRC.

Ferroptosis is a programmed cell death which depends on iron and lipid peroxidation [4]. It affects various morphological, biochemical, and genetic processes in a distinct manner compared to apoptosis, autophagy, and necrosis [5, 6]. Eradicator of Ras as well as ST (erastin) and Ras selective lethal 3 (RSL3) are two important ferroptosis-inducing compounds [7, 8]. In the canonical pathway, glutathione peroxidases (GPXs) induce ferroptosis by inactivating the major membrane mechanisms that protect against peroxidation damage [9]. Glutathione (GSH) and antioxidant enzymes can decrease the levels of reactive oxygen species (ROS) and then reduce the lipid peroxidation products, such as malondialdehyde (MDA), 4-hydroxynonenal (4-HNE) [10]. In addition, non-canonical ferroptosis is initiated when the labile iron pool (LIP) increases [9]. Specifically, abnormal activation of heme oxygenase 1 (HMOX1), reduced the expression of ferroportin, and enhanced the expression of transferrin expression [9].

MicroRNAs (miRNAs, miRs) are a class of small, non-coding RNAs which suppress the translation of target messenger RNAs [11, 12]. Accumulating evidence has shown that miRs play key roles in tumor initiation, progression, and metastasis [13, 14]. Recently, miR-137 was found to participate in ferroptosis by suppressing glutaminolysis, suggesting that it might have therapeutic potential in melanoma [15]. In CRC, miR-424-5p acts as a tumor suppressor by inhibiting ACSL4 [16]. A previous study demonstrated that LINC00342 affects various cellular processes in colon adenocarcinoma (COAD) both in vivo and in vitro by modulating miR-545-5p/MDM2 expression [17]. However, whether miR-454 is involved in ferroptosis-related cell death in CRC remains unknown.

miR-545 was elevated in CRC cells 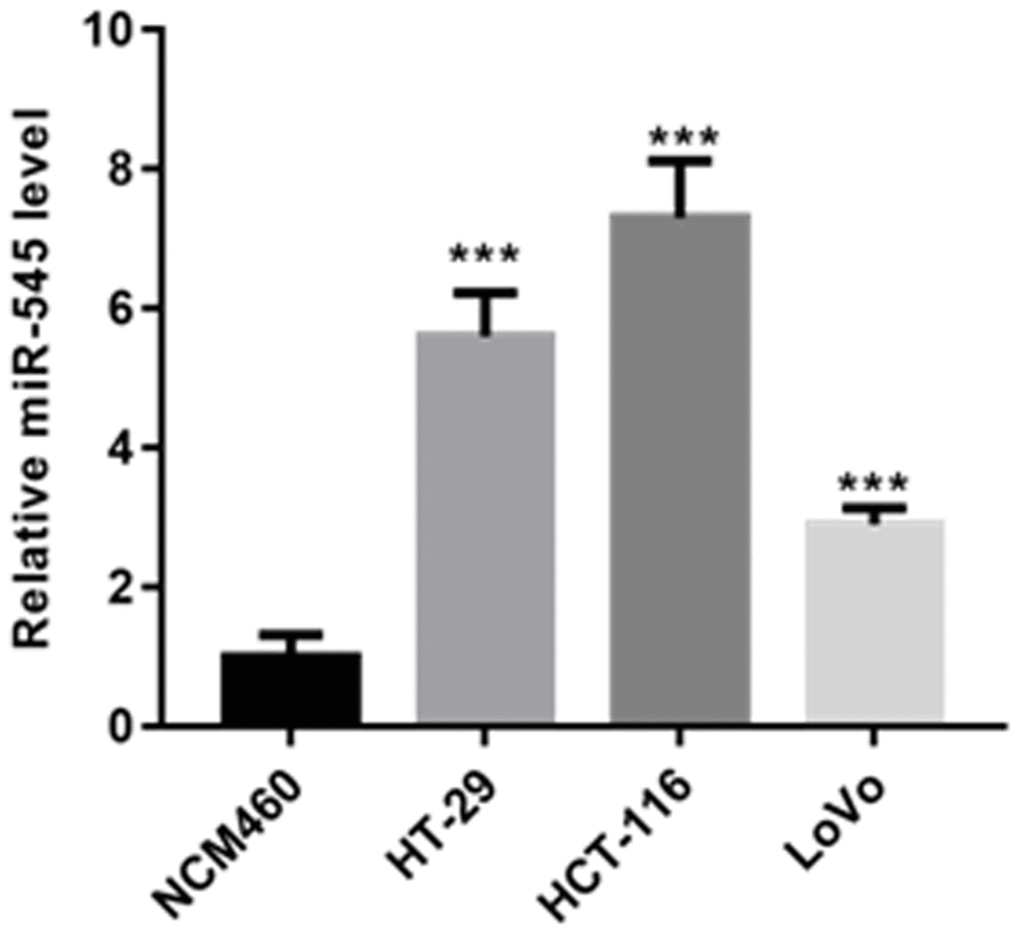 Figure 1. RT-PCR analysis demonstrated that the level of miR-545 was significantly increased in HT-29, HCT-116 and LoVo cells than that of NCM460 cells.

Erastin and RSL3 were used to treat HT-29 and HCT-116 cells. The results showed that erastin and RSL3 significantly reduced HT-29 and HCT-116 cell survival by the dose dependence way (Figure 2A). Furthermore, suppression of ferroptosis via ferrostatin-1 abolished CRC cell death induced by erastin and RSL3, but preincubation with apoptosis inhibitor, ZVAD-FMK and necroptosis inhibitor, necrosulfonamide did not (Figure 2A). These data indicate that CRC cells were susceptible to ferroptosis inducers. 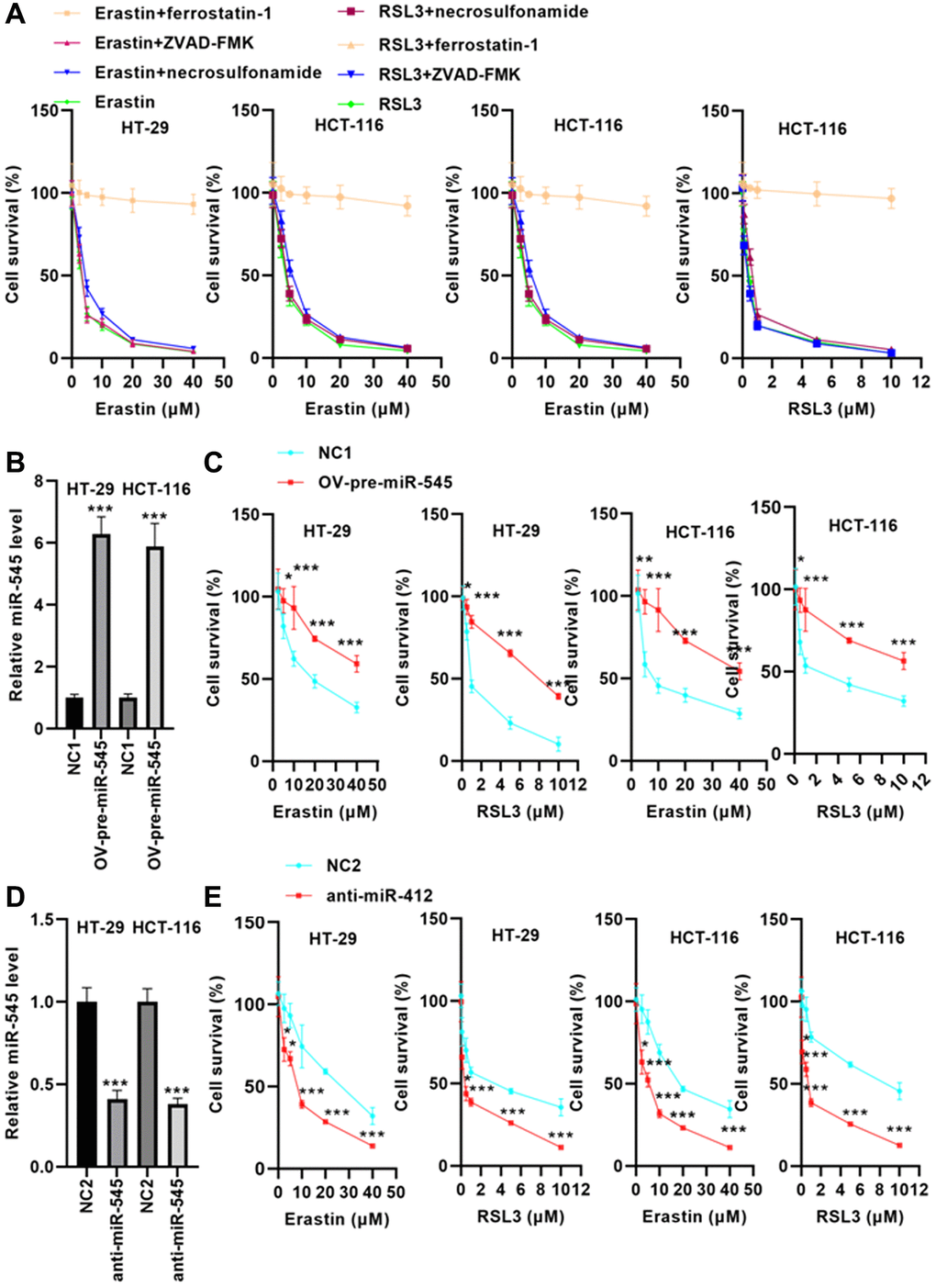 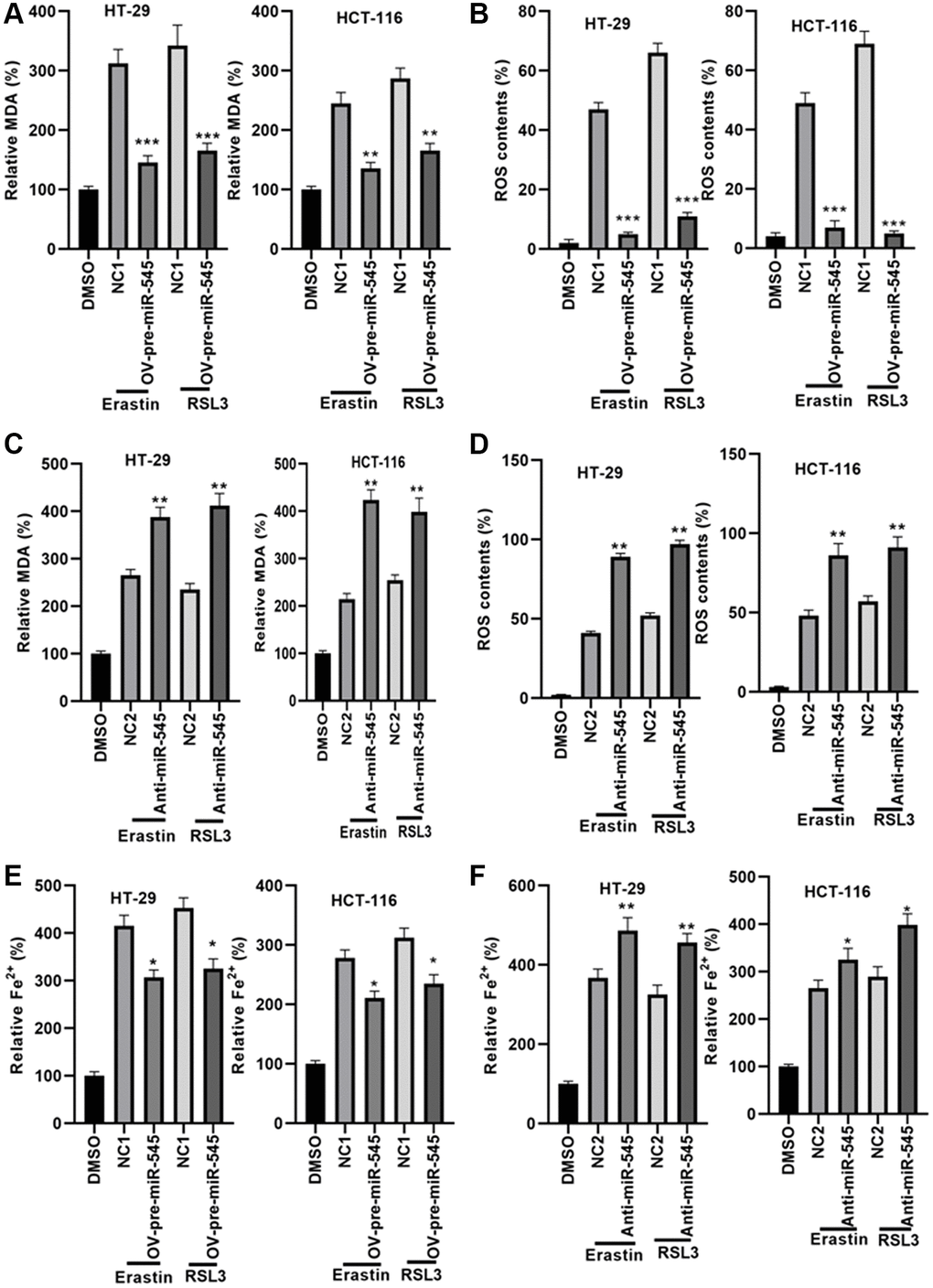 We identified a conserved miR-545 binding site in the 3’UTR of transferrin (TF) (Figure 4A). A dual luciferase reporter assay demonstrated that miR-545 significantly inhibited the relative luciferase reporter activity of pmirGLO-TF-3’UTR, but no changes were found in the luciferase activity of pmirGLO-TF-3’UTR-Mut (Figure 4B). Furthermore, overexpression of miR-545 decreased, while inhibition of miR-545 increased, TF expression in CRC cells (Figure 4C, 4D). These data indicate that miR-545 targets the TF gene. 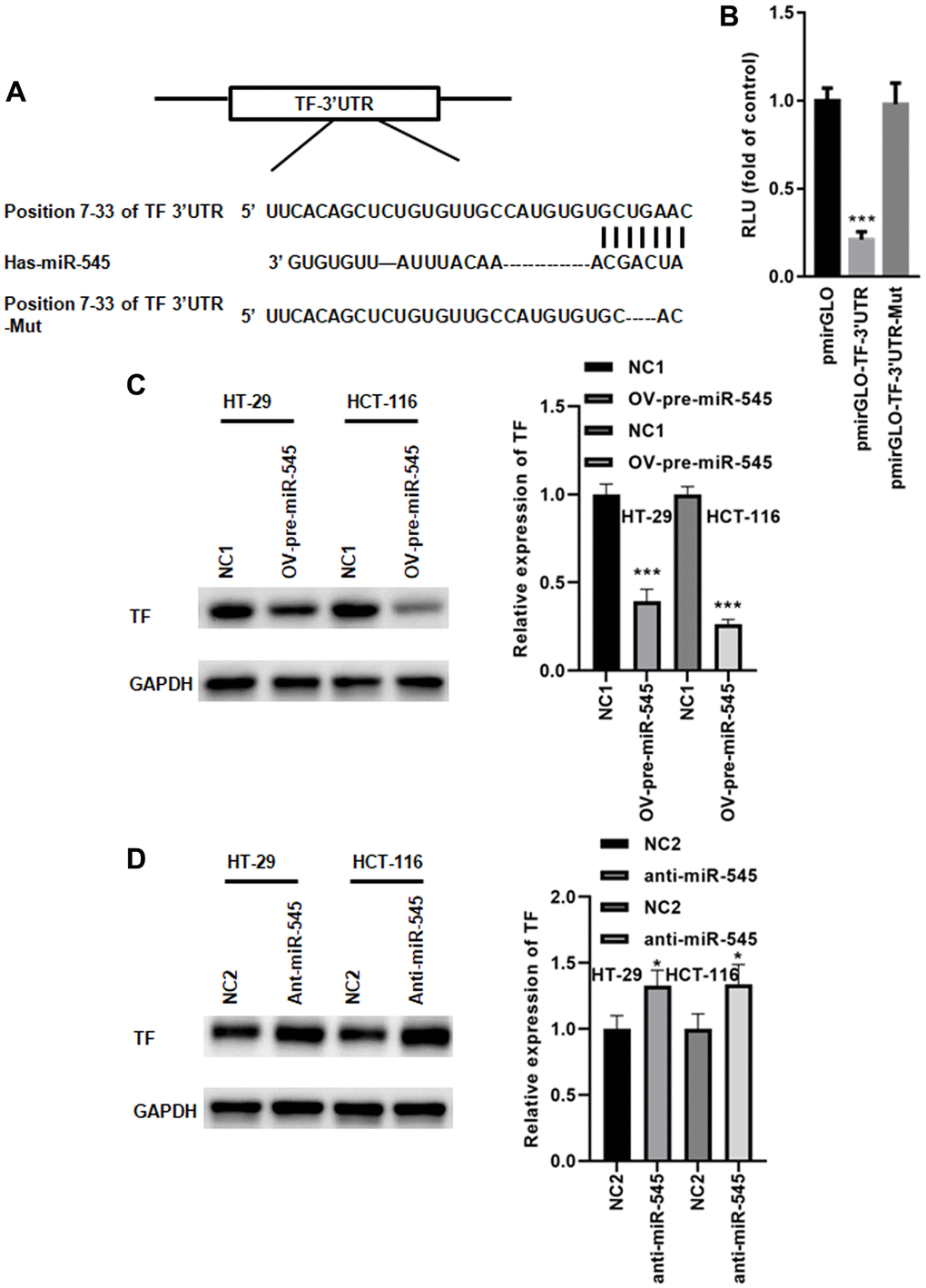 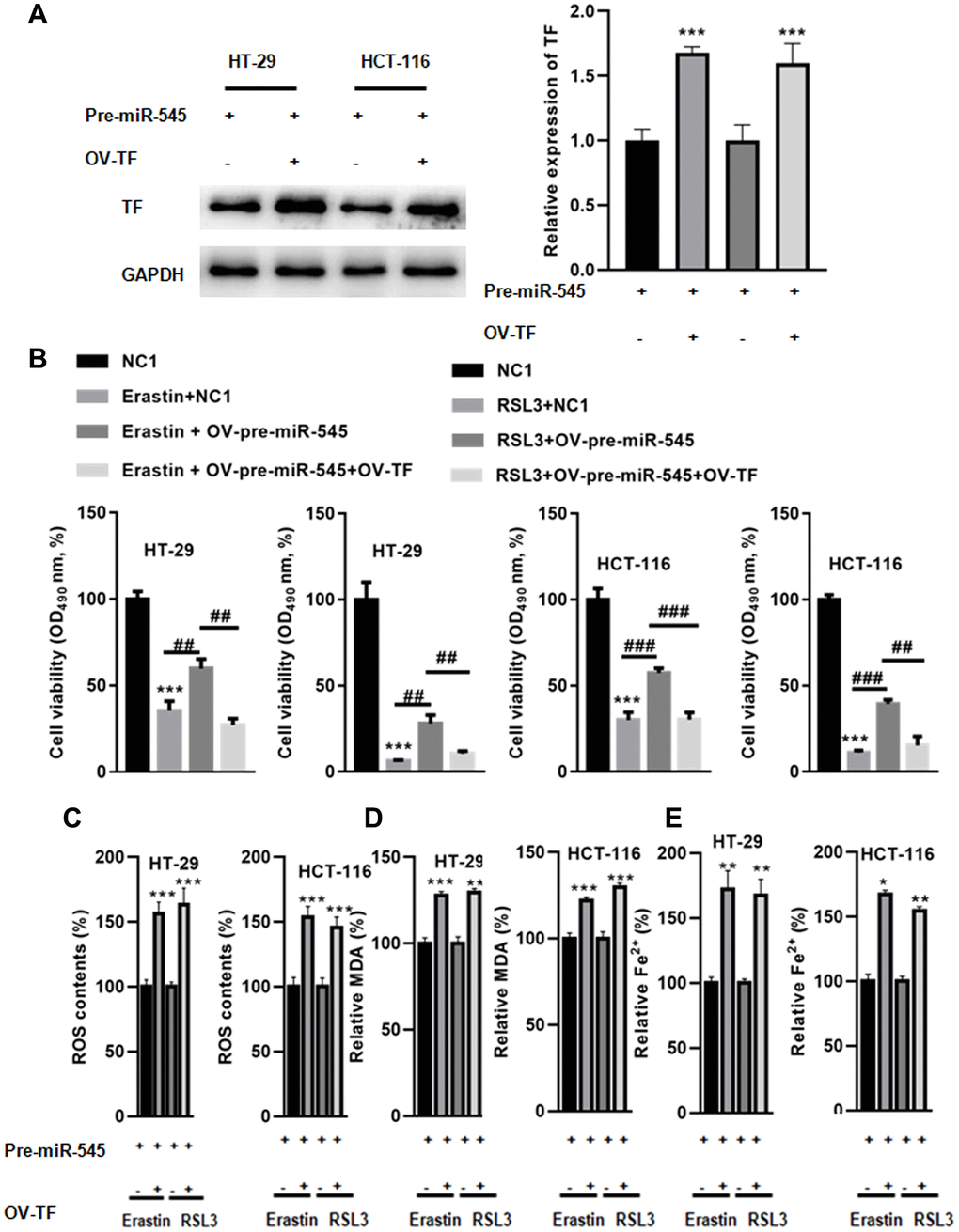 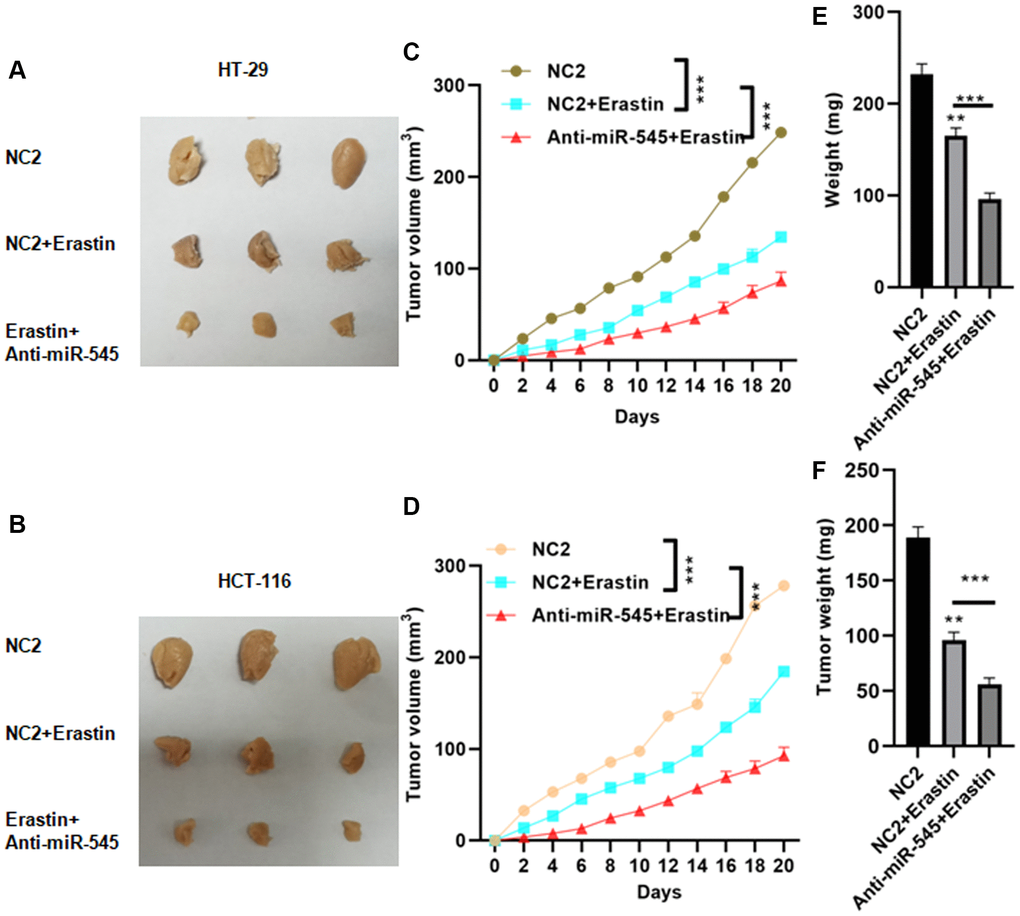 Ferroptosis is a regulated necrosis via iron-induced accumulation of ROS [20]. In the canonical pathway, inhibition of the peroxidation damage repair system induces ferroptosis [21]. Among the GPX enzymes, only GPX4 may be able to defend biomembranes from peroxidation damage [22]. Non-canonical ferroptosis induction is associated in changes in iron levels. The labile iron pool (LIP) is a small pool that contains iron-related compounds and it induces the production of ROS via Fenton reactions and thereby promote lipid peroxidation [9, 23]. In addition, over activation of heme oxygenase 1 (HMOX1), or increased TF expression may increase the LIP, thereby inducing non-canonical ferroptosis [9].

To determine whether miR-545 suppresses ferroptosis via TF, we overexpressed TF in CRC cells. We found that TF overexpression blocked miR-545-induced increases in ROS, MDA, and Fe2+ levels in CRC cells, thereby promoting CRC cell death. These results suggest that miR-545 inhibits ferroptosis in CRC cells by inhibiting TF. An in vivo assay indicated that inhibition of miR-545 decreased tumor growth in nude mice treated with erastin, confirming that miR-545 may play an oncogenic role in CRC.

Taken together, our findings illustrate a novel mechanism in which miR-545 inhibits ferroptosis by regulating iron accumulation in CRC cells.

Plasmids for miR-545 overexpression (OV-pre-miR-545) and its associated negative control 1 (NC1), as well as miR-545 suppression (anti-miR-545) and corresponding NC2, were constructed by Genchem (Shanghai, China). Vigofect transfection reagent (Vigorous, Beijing, China) was used for the transfection of plasmids into HT-29 and HCT-116 cells according to instructions.

The sequences used in the present study were listed as follows:

To construct pmirGLO-TF-3′UTR or pmirGLO-TF-3’ mutant reporter plasmids, the 3’untranslated region (3′UTR) of TF was cloned into pmirGLO plasmids using EasyPure® Genomic DNA Kit or Fast Mutagenesis System (TransGen Biotech, Beijing, China). In brief, 293T cells were seeded at 6 well plate at a density of 106 cells/well for 24. After that, the cells were co-transfected with miR-545 mimic/pmirGLO-TF-3′UTR or miR-545 mimic/pmirGLO-TF-3′UTR-Mut using Vigofect transfection reagent (Vigorous, Beijing, China) for 48 h. Dual-Luciferase® Reporter Assay system (Promega Corporation) was used to analyze the relative luciferase activity according to the manufacturer’s protocol.

In brief, HT-29 or HCT-116 cells were transfected with NC1/OV-pre-miR-545 or NC2/anti-miR-545 in the presence of erastin or RSL3 for 24 h. After that, the cells were incubated with 2′, 7′-dichlorodihydro-fluorescein diacetate (DCFH-DA) at 37°C for 20 min. After washing with PBS for three times, the cells were re-suspended in 500 μL PBS. Finally, ROS levels were measured using a FACS Calibur flow cytometer equipped with CellQuest software (BD Biosciences).

All animal experiments were in accordance with the Guidelines for the Care and Use of Laboratory Animals and were approved by the Animal Research Committee of Zhejiang University School of Medicine.

5-week-old immunodeficient nude mice (male, weight, 16–20 g, n = 40 mice for each group) were purchased from Cyagen bio. Co. (Beijing, China). Before experiments, the mice were adapted to the breeding environment for two weeks. All mice were maintained at a 12 h/12 h light/dark cycle with free access to water and food. A total of 5 × 106 HT-29 or HCT-116 cells were suspended in 100 μL PBS and injected subcutaneously into the right posterior flanks of nude mice. After three weeks, the mice were killed and the tumor xenografts were dissected, weighed and fixed in 10% buffered formaldehyde for further IHC analysis. The tumor volumes were calculated using the following formula: a2 × b × 0.4 (“a” represents the smallest diameter and “b” represents the diameter perpendicular to “a”).

This study was supported by the Zhejiang Provincial Natural Science Foundation of China (Grant No. LY21H160016).