Copyright: © 2022 Wang et al. This is an open access article distributed under the terms of the Creative Commons Attribution License (CC BY 3.0), which permits unrestricted use, distribution, and reproduction in any medium, provided the original author and source are credited.

Osteosarcoma is the most frequently occurring bone cancer and accounts for over half of sarcomas [1]. Epidemiological studies indicated that children and adolescents are more susceptible to this cancer [1]. Although the surgical techniques and neo-adjuvant chemotherapy have greatly advanced, only 25-60% of the osteosarcoma patients respond well, and the rest of the patients with advanced or metastatic osteosarcoma would eventually die due to resistance to anticancer treatments [2]. It is indicated that OS cells originate from several sources, including the undifferentiated mesenchymal stem cells (MSCs), which could develop into cancer stem cells (CSCs) after accumulation of genetic and epigenetic alterations [3]. CSCs play a key role in the onset, treatment resistance, tumor metastasis, and relapse by utilizing their self-renewal and differentiation properties [4]. For example, the embryonal transcriptional regulator Oct-4, SOX2, and Nanog are previously found in osteosarcoma tissues and cells and play important roles in its development [5]. Besides, activation of Wnt/β-catenin pathway leads to transition of osteosarcoma cells into a stem-like state, and subsequently causes chemotherapy failure [6]. Hence, suppressing the cancer cell stemness is a potential therapeutic approach for osteosarcoma. Of note, a recent study determined that MAFB is differentially expressed between tumor section and normal tissues in osteosarcoma, and MAFB transcriptionally regulated the portion of CSCs in osteosarcoma [7].

Levobupivacaine is a commonly used local anesthetics in clinical application [8]. Recent studies disclosed that administration of local anesthetics could also affect the development of cancers in various cancers through inhibiting cell growth and migration [9, 10]. For instance, it has been indicated that levobupivacaine treatment caused impeded growth and metastasis of melanoma cells [11]. Jose and colleagues revealed that levobupivacaine treatment led to a combined suppression of glycolysis and oxidative phosphorylation in human prostate cancer cells [12]. Nevertheless, whether levobupivacaine affects the function of CSCs, especially in osteosarcoma, is not clear.

Lysine acetyltransferase 5 (KAT5) belongs to acetylases family that epigenetically regulate gene expression, and is the first human acetylases identified to be capable of inducing acetylation of both non-histone and histone proteins [13, 14]. KAT5 is one of the most important lysine acetyltransferases (KATs), which has recently been suggested as a potential therapeutic target for cancers, such as breast and colon cancers [13, 15, 16]. Meanwhile, KAT5 plays a crucial role in the modulation of osteosarcoma progression [17, 18].

In this study, we exploited the function of local anesthetics levobupivacaine on osteosarcoma, identified suppressed proliferation, migration and stemness of osteosarcoma cells after treatment. Additionally, levobupivacaine administration inhibited the expression of KAT5, which epigenetically regulated the acetylation of MAFB and subsequently cancer cell stemness. Therefore, levobupivacaine might act as a novel therapeutic agent for osteosarcoma via targeting CSCs.

Levobupivacaine inhibits osteosarcoma cell proliferation in vitro and in vivo 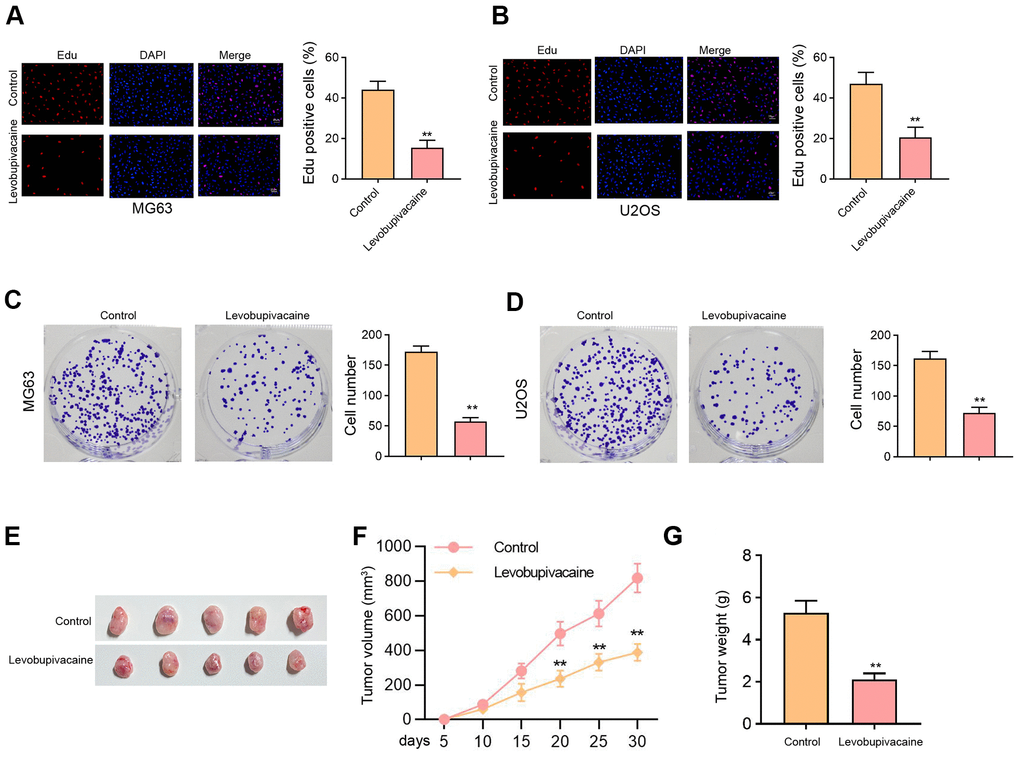 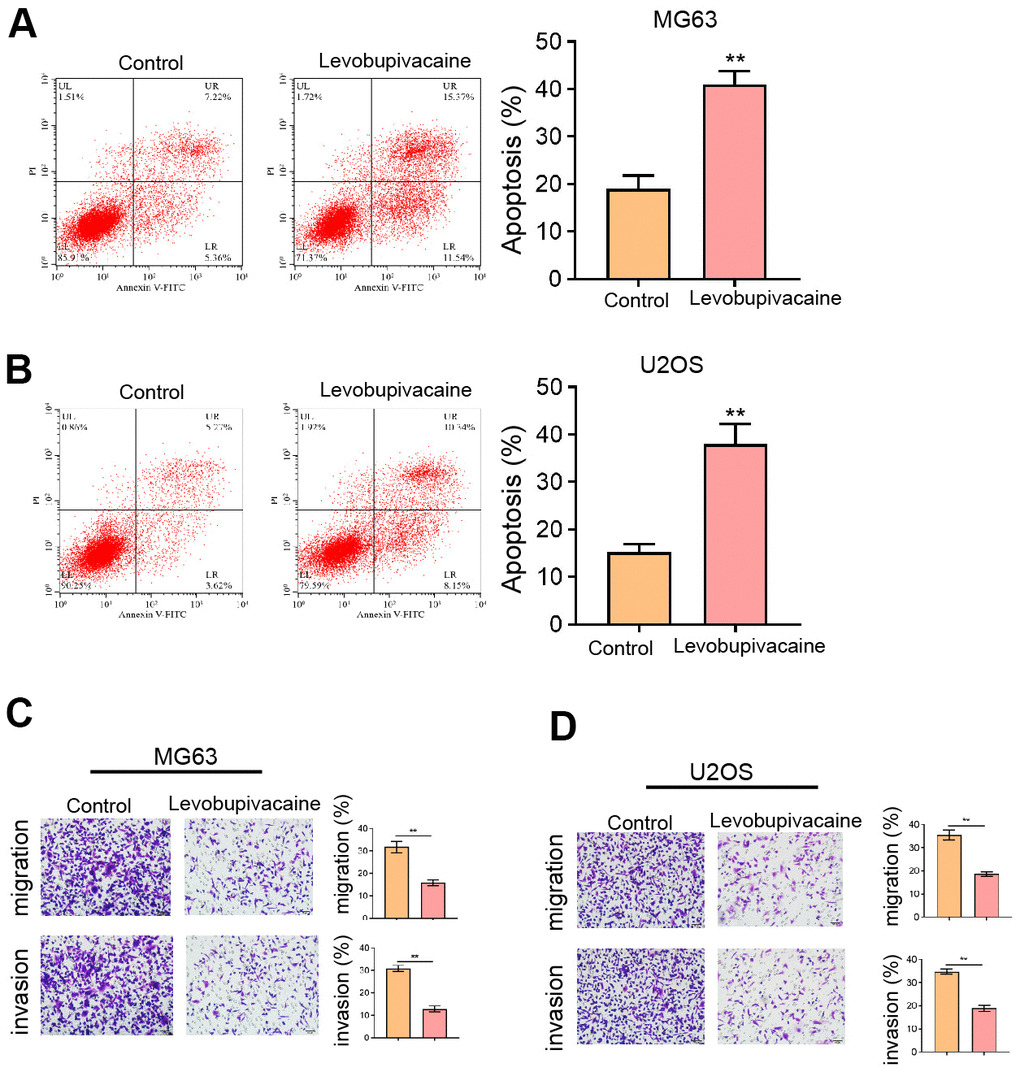 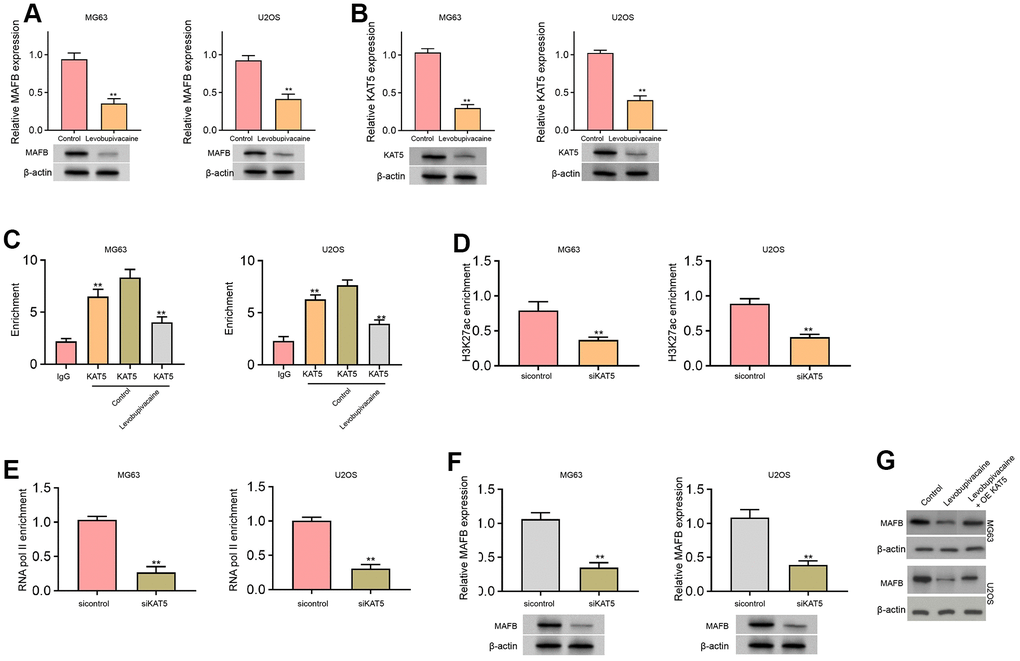 The inhibition of KAT5 represses CSCs properties of osteosarcoma cells

Figure 6. The inhibition of KAT5 represses CSCs properties of osteosarcoma cells. (A–D) MG63 and U2OS cells were transfected with KAT5 siRNA. (A, B) The stemness was measured by sphere formation assays. (C, D) The protein levels of Sox-2, Oct3/4, and Nanog were analyzed by Western blot. mean ± SD, ** P < 0.01. 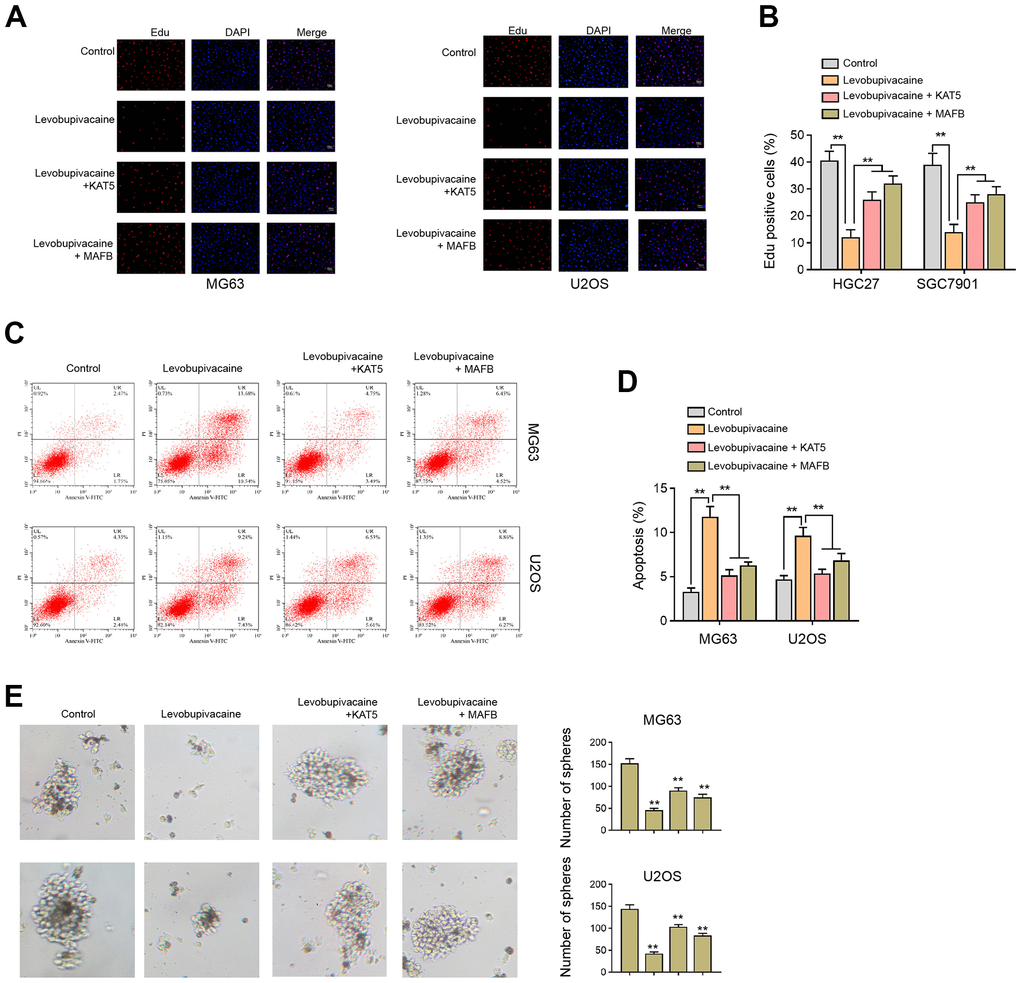 Moreover, it has been reported that KAT5 regulates the acetylation of KDM2B to enhance progression of osteosarcoma [18]. Circular RNA circRHOT1enhances non-small cell lung cancer progression by epigenetically enhancing C-MYC expression through recruiting KAT5/H3K27ac axis [25]. Ketamine inhibits proliferation and promotes ferroptosis and apoptosis of breast cancer cells via targeting KAT5 KAT5/H3K27a/GPX4 axis [26]. MAFB plays a crucial function in regulating CSCs properties. The deficiency of p53 promotes progression of myeloma by reprogramming hematopoietic stem cells to malignant plasma cells by regulating MAFB [27]. MAFB contributes to tumorigenesis and stemness of osteosarcoma by targeting Sox9 [7]. But the correlation of MAFB with KAT5 and H3K27ac is still unreported. Our mechanical study showed that levobupivacaine inhibited MAFB and KAT5 expression in osteosarcoma cells. KAT5 epigenetically enhanced MAFB expression in osteosarcoma cells. Levobupivacaine repressed MAFB expression by reducing KAT5. Our finding identifies a new epigenetic mechanism of levobupivacaine-mediated cancer development. Meanwhile, we provide a new function of KAT5 for the epigenetically inducing MAFB expression in the regulation of CSCs properties of osteosarcoma. The clinical significance and association of KAT5 and MAFB need more evidence and investigations.

The osteosarcoma cell lines MG63 and U2OS were ordered from the Shanghai Institute of Biochemistry and Cell Biology (China), and cultured in MEM medium (HyClone, USA) and MoCoy’s 5a medium (HyClone), respectively. All medium were added with 10% fetal bovine serum (FBS, Gibco) and 1% penicillin/streptomycin solution (Thermo, USA). All cells were placed at a 37° C humidified incubator containing 5% CO2. Overexpressing plasmids inserted with the CDS regions of KAT5 (pCMV-KAT5) and MAFB (pCMV-MAFB), and small interfering RNA targeting KAT5 (siKAT5) and the corresponding negative control were obtained from GenePharma (China). For cell transfection, the plasmids or siRNAs were mixed in transfection reagent lipofectamine 2000 (Invitrogen, USA) in opti-MEM medium (HyClone) and added into cultured MG63 and U2OS for 24 hours. Cells were then collected for subsequent experiments. The dose of levobupivacaine was used at 2 mM according to the previous report [28].

The primary chondroma and osteosarcoma tissues were collected from 27 patients before the neo-adjuvant chemotherapy. The patients were histologically characterized by a pathologist using the criteria described by the World Health Organization. The application of the samples was underwritten informed consent of the patients, and all study protocols were approved by the Ethics Committee of The First Hospital of Lanzhou University.

Colony formation experiment was conducted to evaluate cell proliferation. The MG63 and U2OS cells were seeded in 6-well plates (600 cells/well) and treated with Levobupivacaine at 0 or 2mM for 14 days till the visible colonies formed. The colonies were sained by 0.5% crystal violet in methanol solution for 15 minutes, photographed by a microscope (Leica, Germany) and counted.

For 5-ethynyl-2′-deoxyuridine (EdU) assay, MG63 and U2OS cells were placed in 96-well plates and treated by levobupivacaine or indicated transfection. The cells were labelled by EdU and stained by Hoechst 33342 in accordance with the protocol of EdU-labeling kit (Thermo, USA). The intensity of positive staining was captured by a fluorescence microscope (Leica) and counted.

MG63 and U2OS cells were placed in 96-well plates and treated by levobupivacaine or indicated transfection for 24 hours. Then the cells were collected and stained by a Annexin V/PI apoptosis detection kit (Thermo) under manufacturer’s instruction. In short, cells were suspended in binding buffer and stained by FITC-conjugated Annexin V reagent and PI for 15 minutes in dark, respectively. The labelled cells were detected by a flow cytometer (BD Biosciences, USA).

Transwell assays analyzed the invasion and migration by using a Transwell plate (Corning, USA) according to the manufacturer's instruction. To analyze the cell migration, the cells were cultured for 24 hours and resuspended by serum-free culture medium, then plated into the apical chamber of transwell at a density of 5 × 103 cells/well. The culture medium was made up to 150 μL and the basolateral chamber was added with 600 μL complete culture medium. After 24 hours, culture at 37° C and 5% CO2, the cells were fixed through 4% paraformaldehyde 10 minutes, stained by crystal violet dye for 20 minutes, followed by the analysis using the intelligent biological navigator (Olympus, Tokyo, Japan). The migrated cells were recorded and calculated by using the ImageJ software.

To analyze the cell invasion, Matrigel was melted overnight at 4° C and diluted by presold serum-free culture medium (ratio 8: 1). The medium (50 μL) was plated into the transwell polycarbonate membrane with a pore diameter of 8 μm, making all the wells were covered by Matrigel at 37° C for 2 hours. The cells were cultured for 24 hours and resuspended by serum-free culture medium, then plated into the apical chamber of transwell at 1 × 105 cells/well, the medium was made up to 150 μL. The basolateral chamber was added with 600μL complete medium with 50% FBS. After 24 hours, the cells were fixed using 4% paraformaldehyde for 15 minutes, stained by crystal violet dye for 10 minutes. The invaded cells were analyzed and calculated by using the ImageJ software.

Total protein was extracted from MG63 and U2OS cells by a Protein Extraction Reagent (Thermo). An equivalent amount of 30 μg cell lysates were loaded and separated in the 10% SDS-PAGE and shifted to the nitrocellulose membrane (Bio-Rad, USA). Membranes were soaked in 5% bovine serum albumin (BSA) for 1 hour, followed by incubation with primary antibodies against MAFB (ab243902), Sox-2 (ab92494), Oct3/4 (ab230429), Nanog (ab109250), GAPDH (ab8245) and subsequently with corresponding secondary antibodies. All antibodies were purchased from Abcam (USA) and diluted according to the manufacturer’s protocols. The bands were visualized by an enhanced chemiluminescent reagent (ECL, Millipore, USA) in a gel image system (Bio-Rad, USA).

MG63 and U2OS were subjected to appropriate transfection, and seeded in ultra-low attachment 24-well plates (Corning) at a density of 200 cells per well. The culture medium consists of DMEM/F12 medium (Hyclone) added with EGF, bFGF, methyl cellulose, and B27 supplement (PeproTech, USA) following manufacturer’s protocols. Cells were cultured for two weeks and the medium was changed every three days. The formed spheres were photographed by a microscope (Leica).

Total RNA was isolated from MG63 and U2OS cells via a TRIzol reagent (Sigma) after indicated treatment in each experiment. The extracted RNA was subjected to Maxima H Minus cDNA Synthesis Master Mix (Thermo) to obtain cDNAs, and subsequent quantification by an Applied Biosystem SYBR kit (Thermo). The relative expression of MAFB and KAT5 were normalized to the internal control GAPDH. Primers were listed:

ChIP assays were conducted to determine the epigenetic regulatory of MAFB by using a ChIP assay kit (Thermo) following the manufacturer’s description. In short, MG63 and U2OS cells were transfected with siKAT5 or NC, collected, fixed with formaldehyde and lysed. The extracted DNA were sonicated to short fragments of around 200 to 500 bp. Subsequently, the fragments were incubated with antibody against KAT5, H3K27Ac, or RNA Polymerase II (Abcam) at 4° C for 12 hours in rotation, and the following binding with Protein A agarose beads (Thermo) for 3 hours at room temperature. The precipitants were washed and the DNA-protein complex was striped off the beads. PCR assay was used to measure the level of DNA segments.

SCID/Nude mice at 4-weeks old were subcutaneously injected with osteosarcoma cells (106 cells/site) suspended in Matrigel and DMEM medium (1:1), and were fed with free access to water and food. Levobupivacaine were administrated at a dose of 40 μmol/kg every day [28]. The size of the subcutaneous tumors was measured every 3 days and calculated by the following formula: volume = 0.5 × length × width2. Mice were ordered from Vital River Laboratory Animal Technology (China). All animal experiments were approved by the Institutional Animal Care and Use Committee (IACUC) of the First Hospital of Lanzhou University.

Each experiment was conducted at least three times independently and data was presented as mean ± SD. Statistical differences were analyzed using Student’s t-test or one-way ANOVA by using the SPSS 17.0 software (USA). A p value less than 0.05 was regarded as statistically significant.