Increased calcium channel in the lamina propria of aging rat

The alterations of the extracellular matrix (ECM) in lamina propria of the vocal folds are important changes that are associated with decreased vibrations and increased stiffness in aging vocal fold. The aim of this study was to investigate the differences in gene expression of lamina propria using next generation sequencing (NGS) in young and aging rats and to identify genes that affect aging-related ECM changes for developing novel therapeutic target molecule. Among the 40 genes suggested in the NGS analysis, voltage-gated calcium channels (VGCC) subunit alpha1 S (CACNA1S), VGCC auxiliary subunit beta 1 (CACNB1), and VGCC auxiliary subunit gamma 1 (CACNG1) were increased in the lamina propria of the old rats compared to the young rats. The synthesis of collagen I and III in hVFFs decreased after si-CACNA1S and verapamil treatment. The expression and activity of matrix metalloproteinases (MMP)-1 and -8 were increased in hVFFs after the treatment of verapamil. However, there was no change in the expression of MMP-2 and -9. These results suggest that some calcium channels may be related with the alteration of aging-related ECM in vocal folds. Calcium channel has promising potential as a novel therapeutic target for the remodeling ECM of aging lamina propria.

The changes in age-induced gene expression over 22 months old rats compared to 6 months old rats were first evaluated at each of the group points (Table 2A). And then, we obtained corresponding annotation results as each DEG mapped into the well annotated genes (Table 2B). Detailed information for Table 1A and Table 1B shown in Supplementary data for Table 1 and Supplementary data for Table 2. At this point, we determined vocal fold aging related genes that are common between each sample comparison (Y1-4 vs O1-4, Y1-4 vs O5-8, Y5-8 vs O1-4, Y5-8 vs O5-8, and Y1-4, Y5-8 vs O1-4, O5-8). We identified 40 and 79 differentially expressed genes by aging process, which were up- or down-regulated by fold changes, respectively, across all of the group-points (Table 1C). Detailed information on aging related genes is provided in Supplementary data for Table 3. 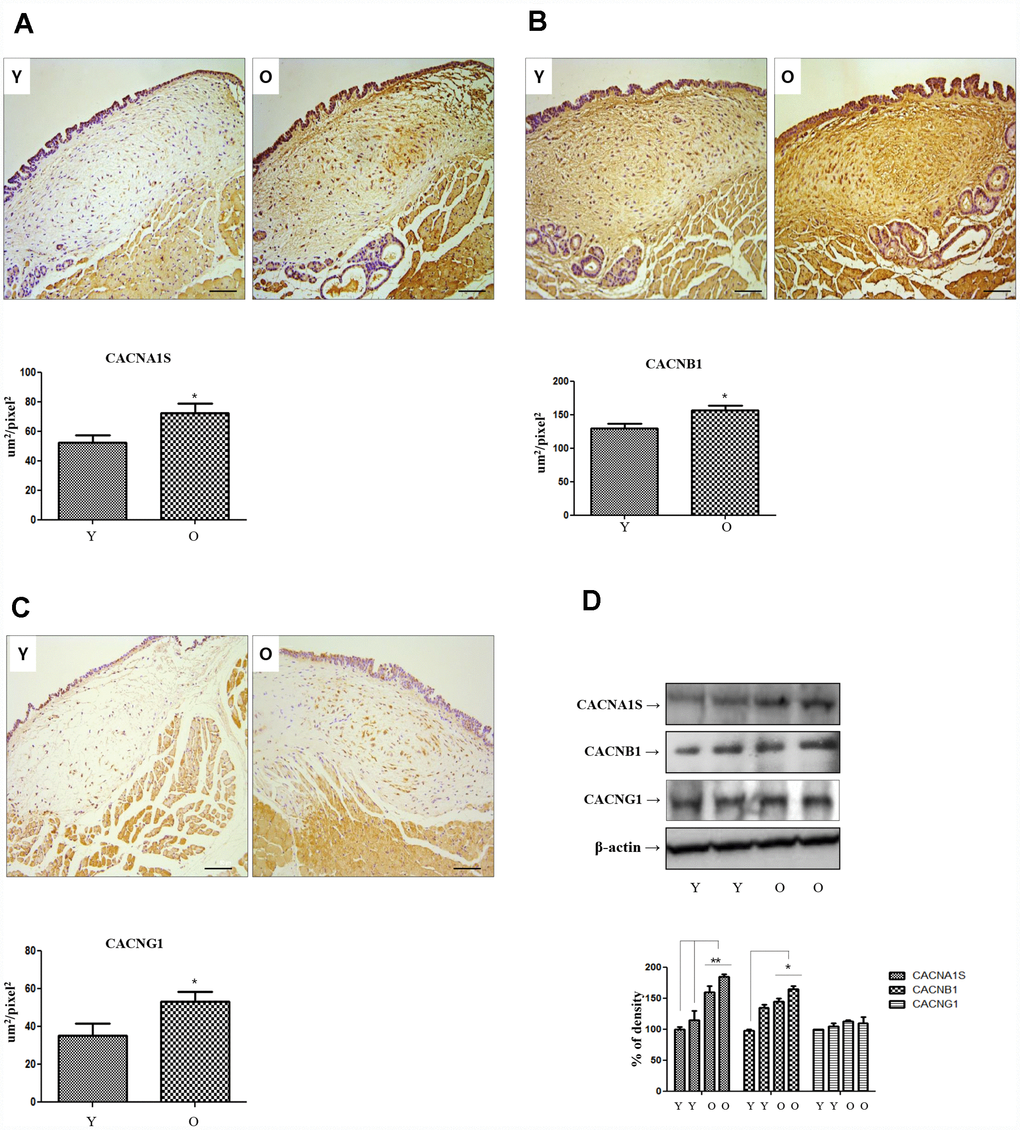 The three calcium channel genes (CACNA1S, CACNB1 and CACNG1) which were significantly increased by the immunohistochemistry and NGS studies in the aging lamina propria of rat were expressed as hVFFs (Figure 2A). To investigate the relationship between these genes and the alteration of extracellular matrix in aging lamina propria, the changes of collagen and hyaluronic acid were observed by knockdown using siRNA for these calcium channel genes. We confirmed by qPCR and western blotting under non-reducing condition whether these genes were effectively knocked down (Figure 2A). After that, the protein expression of collagen I, III, hyaluronic acid and elastin was examined. The results show that these knockdown cells suppressed collagen I and III expression. Especially, CACNA1S knockdown cells significantly inhibited collagen I and III protein synthesis compared to CACNB1 and CACNG1 knock down cells (Figure 2B). However, hyaluronic acid and elastin were not affected by knockdown of these calcium channels genes (Figure 2C and 2D). These knockdown cells did not show a significant change in the expression of MMP-1, 2, 8, and 9 associated with collagen degradation (Figure 2E). 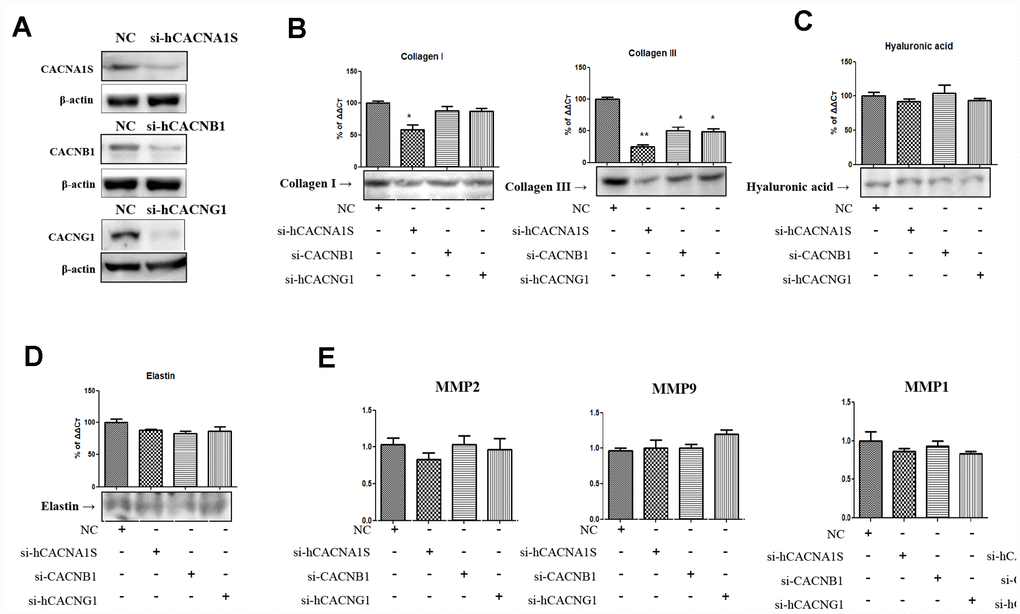 Proliferation and viability of hVFFs after verapamil treatment 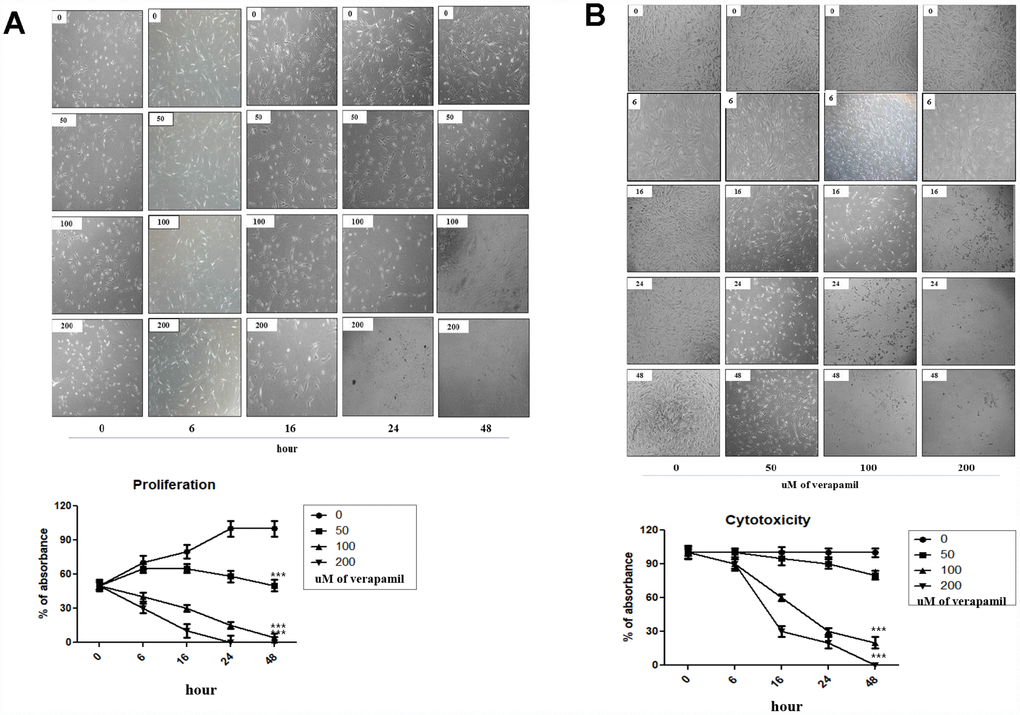 CACNA1S that is most relevant to changes in aging-related ECM is one of the subtypes of voltage-gated calcium channels subunit alpha1 (CACNA1). CACNA1 is the primary function unit of the calcium channel and has 10 sub-types [15]. So, the expression of other hCACNA1 subtypes was investigated in hVFFs. hCACNA1B, hCACNA1S, and hCACNA1A are highly expressed compared to other subtypes (Figure 4). 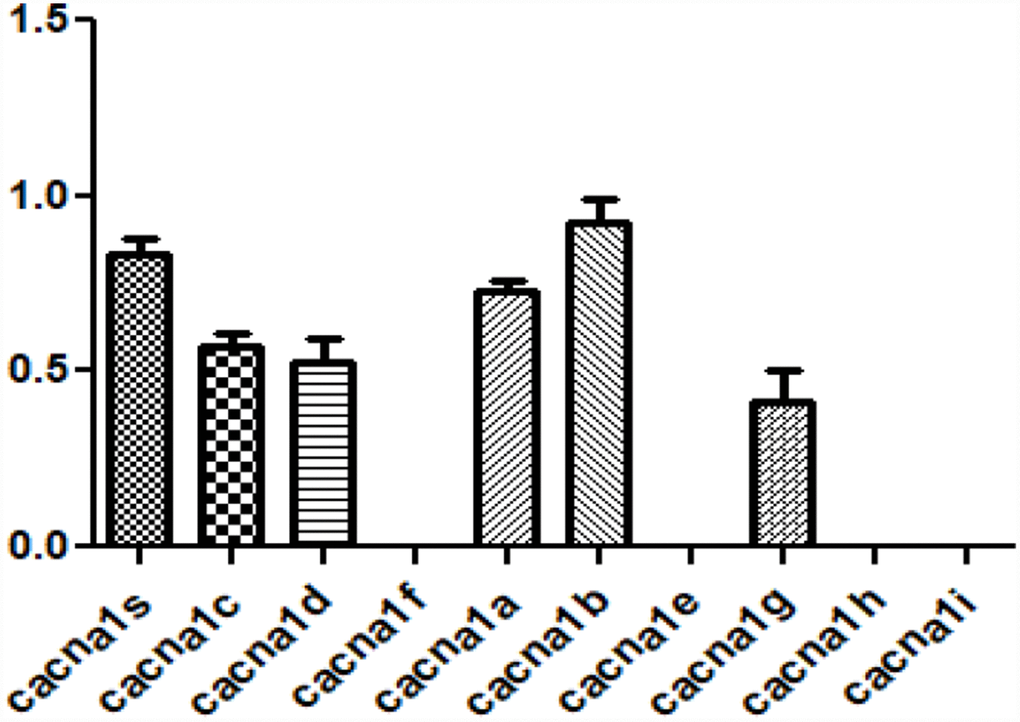 Figure 4. Expression of voltage-gated calcium channel subunit alpha subtypes in hVFFs. The expression of 10 hCACNA1 subtypes are investigated in hVFFs. hCACNA1B, hCACNA1S, and hCACNA1A are highly expressed compared to other subtypes.

When the verapamil was treated with hVFFs for 6 hours, the expression of CACNA1S decreased in qPCR and Western blot (Figure 5A). Also, the synthesis of collagen I and III in hVFFs decreased according to the concentration of verapamil (Figure 5B). However, there was no effect on the synthesis of hyaluronic acid or elastin (Figure 5C and 5D). MMP-1 and -8, which are associated with the degradation of collagen, increased the expression and activity as the concentration increased (Figure 5E and 5F). However, there was no change in the expression of MMP-2 and -9 (Figure 5E). 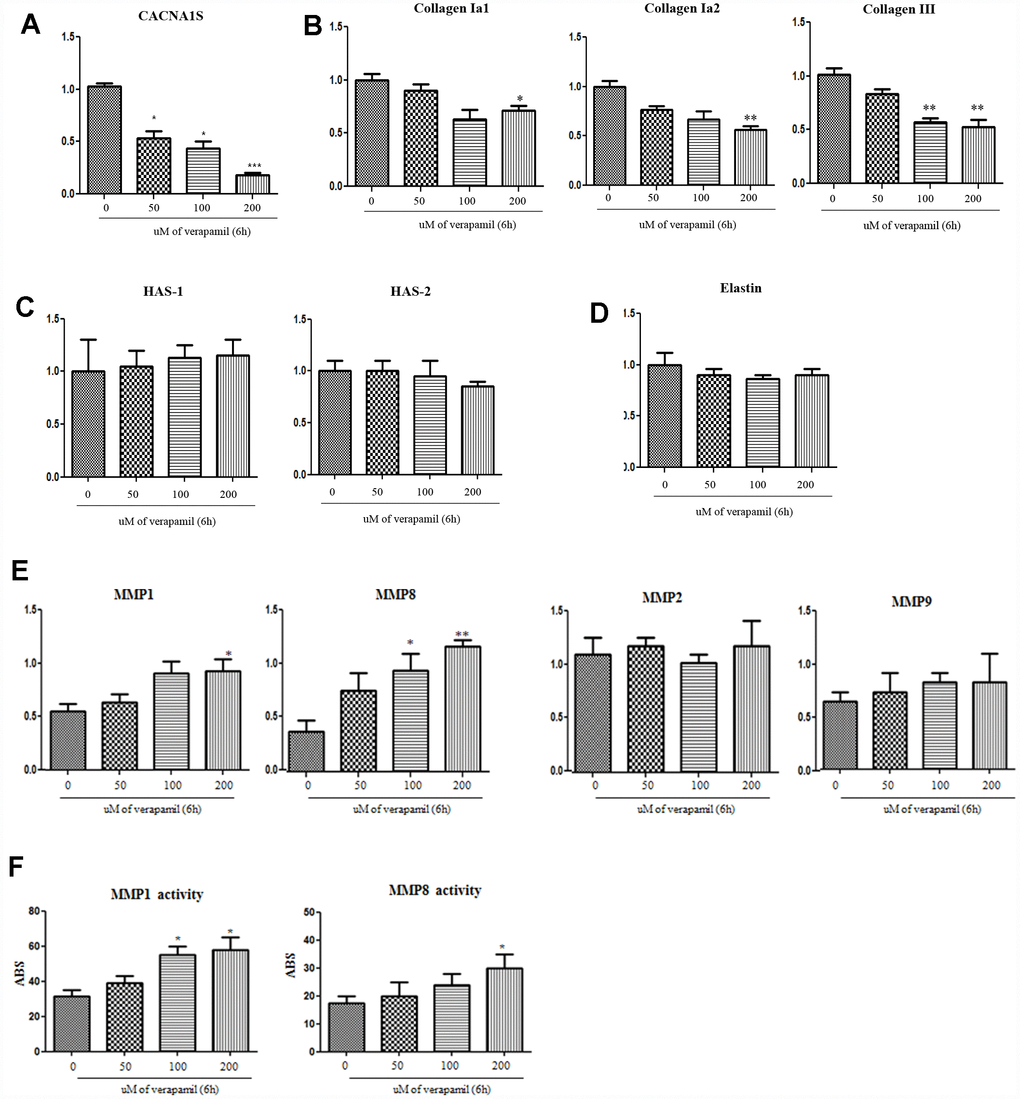 Figure 5. Alteration of CACNA1s gene and ECM protein with verapamil treatment in hVFFs. After the verapamil treatment for 6 h in hVFFs, the expression of CACNA1S decreases in RT-PCR as dose-dependent manner (A). The synthesis of collagen I alpha 1 and 2 and collagen III in hVFFs decrease according to the concentration of verapamil (B). However, there are no effect on the synthesis of HA or elastin (C and D). MMP-1 and -8 are increased the expression and activity as the concentration increased (E and F). However, there was no change in the expression of MMP-2 and -9 (E). Relative gene expression (fold change) was normalized to the respective housekeeping gene (18s RNA) controls. HAS, hyaluronic acid synthase. MMPs, matrix metalloproteinases. One-way ANOVA test; NS as no significant, *p<0.05, **p<0.01 and ***p<0.001.

Figure 6. Summary of our study. CACNA1S, CACNB1, and CACNG1 are significantly increased in the NGS study and immunohistochemistry in the lamina propria of aging vocal folds. The synthesis of collagen I and III of hVFFs with si-CACNA1S are reduced significantly. When verapamil is treated in hVFFs, the expression of CACNA1S and the synthesis of collagen I and III are decreased and the expression of MMP-1 and 8 are increased. Voltage gaited calcium channel, especially CACNA1S, has promising potential as a novel therapeutic target for remodeling ECM of lamina propria.

The animal protocol used in this study was reviewed and approved beforehand by the Pusan National University-Institutional Animal Care and Use Committee (PNU-IACUC) with respect to ethicality and scientific care. To investigate the difference of genes expression of age-related lamina propria in rat vocal fold during aging process, we used 6 and 22 months old male Sprague-Dawley rats (n=8, each group) for NGS. Six and 22 months old male SD rats (n=12, each group) were used for immunohistochemistry validation and western blotting of the molecules proposed in the NGS study.

Larynges were harvested immediately after sacrifice and frozen with liquid nitrogen and storage in -80°C freezer for RNA-seq and real time qPCR. NGS was performed on 2 young samples (young 1-4, young 5-8) and 2 old samples (old 1-4, old 5-8). Tissue RNA extraction was commissioned by Teragene (Osong, Korea). Ahead of cDNA library construction, the 2ug of total RNA and magnetic beads with Oligo (dT) were used to enrich poly (A) mRNA from it. Then, the purified mRNAs were disrupted into short fragments, and the double-stranded cDNAs were immediately synthesized. The cDNAs was subjected to end-repair, poly (A) addition, and connected with sequencing adapters using the TruSeq RNA sample prep Kit (Illumina, CA). The suitable fragments automatically purified by BluePippin 2% agarose gel cassette (Sage Science, MA) were selected as templates for PCR amplification. The final library sizes and qualities were evaluated electrophoretically with an Agilent High Sensitivity DNA kit (Agilent Technologies, CA) and the fragment was found to be between 350–450 bp. Subsequently, the library was sequenced using an Illumina HiSeq2500 sequencer (Illumina, CA).

Low quality reads were filtered according to the following criteria; reads contain more than 10% of skipped bases (marked as ‘N’s), reads contain more than 40% of bases whose quality scores are less than 20 and reads whose average quality scores of each read is less than 20. The whole filtering process was performed using the in-house scripts. Filtered reads were mapped to the human reference genome, Ensembl release 72, using the aligner STAR v.2.3.0e [45, 46]. Gene expression level was measured with Cufflinks v2.1.1 using the gene annotation database of Ensembl release 72. Non-coding gene region was removed with mask option. To improve the accuracy of measurement, multi-read-correction and fragbias-correct options were applied. All other options were set to default values.

We isolated whole lamina propria of vocal fold with a needle of syringe under microscopic view for the primary culture of rat vocal fold fibroblast. Lamina propria tissues were dissociated and digested with 0.1% trypsin and 200 unit/ml type I collagenase (Gibco, Carlsbad, CA) at 37 °C for 1 hour, strained through a 40-μm filter, rinsed, resuspended in Dulbecco's modified Eagle's medium (DMEM)/F12 medium containing 10% fetal bovine serum (FBS) and 100 U/mL penicillin-streptomycin (Sigma-Aldrich, St. Louis, MO), and plated on culture plates. The dishes were kept at 37°C in a cell culture incubator with 5% CO2-95% air. The medium was changed every 2 to 3 days until cells had migrated from the explant. The remaining tissue pieces were removed, and cells were allowed to reach subconfluence (ie, 90% confluent). For Western blotting analysis, cells were harvested and lysed in PROPREP lysis buffer (Invitrogen). Equal amounts of protein were separated on 10-12% SDS-PAGE gels (Life Technologies) as described by Laemmli (Laemmli, 1970) with primary anti-CACNA1S, anti-CACNB1 (Abcam, Cambridge, United Kingdom) and anti-CACNG1 (Life Technologies, Rockville, MD) were used.

The hVFFs were kindly provided by Professor Susan Thibeault of the University of Wisconsin, USA [47]. The small interfering RNA (siRNA) oligonucleotides that specifically target human CANCA1S, CACNB1 and CACNG1 were prepared and synthesized by Dharmacon Inc. (Austin, TX, USA). A negative control siRNA (scrambled) was included to monitor nonspecific effects. Cells were transfected with 60 pmoles of ON-TARGETplus human CANCA1S, CACNB1 and CACNG1 siRNA against calcium channel genes for 24~36h using the Lipofectamin 2000 transfection reagent (invitrogen) in OPTIMEM medium (Invitrogen) according to the manufacturer’s protocol. Scramble siRNA using as negative control. The efficiency of knockdown is confirmed with Western blot analysis under non-reducing and reducing condition.

For all experiments, cells were treated with various dosage of verapamil. After time period, cells were incubated with MTT at 37 °C for 4 h, and the precipitate was dissolved in DMSO. Subsequently, the absorbance (optical density, OD) at 570 nm was measured using a microplate reader (Model 680; Bio-Rad Laboratories, Hercules, CA, USA) and cell viability was calculated according to the % formula. Cellular RNA was extracted using the TRIzol system (Life Technologies, Rockville, MD). Reverse Transcription Kit (Applied Biosystems, Foster City. California) was used to perform reverse transcription according to the manufacturer's recommended reaction protocol. Real-time PCR was performed according to the SYBR Green PCR protocol (Applied Biosystems Foster City CA). Gene-specific PCR products were continuously measured by an ABI PRISM 7900 HT Sequence Detection System (PE Applied Biosystem Norwalk, CT). The information on primer sequences are as following Table 2.

The general activity of MMP enzyme was determined using an assay kit purchased from Abcam (Cat No. ab112146) according to the manufacturer’s protocol. Cells were treated with vehicle (control) and various dosage of verapamil and the MMP activity was assayed in the conditioned media. A kinetic measurement was then performed for the MMP activity by using a microplate reader with a filter set of Ex/Em = 490/ 525 nm.

Unless otherwise noted, all quantitative data were reported as the mean standard error of the mean from at least three parallel repeats. Two-way analysis of variance was used to determine significant differences between groups in which P < 0.05 was considered statistically significant. The analyses were performed using Graph Pad Prism 5 (Graph Pad software, La Jolla, CA, USA).

We take this opportunity to thank the Aging Tissue Bank (Busan, Korea) for supplying aged tissue.

The authors have no potential conflicts of interest to declare.

This work was supported by the National Research Foundation of Korea (NRF) grant funded by the Korea government (No. 2016R1D1A3B01015539).