Considering the predominant role of rare variants of the Bone morphogenetic protein 9 (BMP9) gene in the occurrence of idiopathic pulmonary arterial hypertension (IPAH), here we conducted a case-control study, together with functional validation, to explore the relationships between variants of the BMP9 gene and development of IPAH. We found minor alleles of rs3740297 (OR: 0.72, 95% CI: 0.59-0.87, P=7.77×10-5) and rs7923671 (OR: 0.76, 95% CI: 0.62-0.93, P=0.009) were significantly associated with decreased risk of IPAH. Minor alleles of rs3740297 and rs7923671 were significantly associated with increased plasma level of BMP9 in both IPAH cases and controls (P<0.001). An allele of rs7923671 showed higher relative luciferase activity compared to that containing G allele (P<0.001). Mechanism exploration found that pulmonary artery smooth muscle cells (PASMC) cell line transfected with rs3740297 C allele construct, miR-149 mimic, and antagomir miR-149 showed more sensitive change of the relative luciferase activity and BMP9 expression. This means minor allele T of rs3740297 could significantly decrease susceptibility of IPAH in Chinese population, possibly by increasing BMP9 expression through losing a miR-149 binding site. Our study provides evidence for genetic associations between two specific variants in the BMP9 gene and plasma level of BMP9, occurrence of IPAH.

Pulmonary arterial hypertension (PAH), a severe vasculopathy characterized by progressive narrowing and obliteration of the pulmonary arterioles, resulted in heart failure and premature death, and had raised the public concerns [1–3]. PAH was still associated with high rate of severe cardiovascular events and dismal mortality, although the treatment of PAH has advanced substantially over the past 20 years [4, 5]. It was estimated that the incidence of PAH ranges from 2.0 to 7.6 cases per million adults per year, and its prevalence varies from 11 to 26 cases per million adults worldwide [6]. Although growing evidence revealed multiple genetic and environmental mechanisms contributed to PAH development, including the incapacitation or mutation of the bone morphogenetic protein receptor type-2 (BMPR2) gene, epigenetic abnormality, or the sex hormone imbalance, the exact pathogenesis still remains unclear [6]. These factors could only explain a fraction of PAH cases, suggesting additional PAH genes awaiting exploration [6, 7].

Previous studies had supported a pivotal contribution of Bone morphogenetic protein 9 (BMP9, also known as growth differentiation factor 2) signaling axis to PAH [8–11]. Homozygous nonsense mutations in BMP9 had been reported in a child with severe PAH [11]. Recently, Wang et al. [9] conducted an exome-wide gene-based burden analysis and reported that the rare coding mutations in BMP9 gene occurred in 6.7% of idiopathic PAH (IPAH) cases, ranking this gene second to the BMPR2 gene. Later study in Caucasians also provide independent validation of a critical role for BMPR2 in PAH [12]. Besides, BMP9 was also identified as a sensitive and specific biomarker of porto-pulmonary hypertension (POPH) [10]. Considering the predominant role of rare variants of the BMP9 gene in the occurrence of PAH, none studies have explored the contributions of the common variants of the BMP9 gene to the pathogenesis susceptibility of IPAH. Thereby, here we conducted a case-control study, together with functional validation, to explore the relationships, if any, between common variants of the BMP9 gene and development of IPAH.

The characteristics of 836 patients with IPAH and 900 control subjects included in this study were shown in Table 1. There were no significant differences in the distribution of age, gender, smoking and drinking status, as well as BMI between the IPAH cases and controls (P > 0.05 for all). These results indicate the comparability of this case-control study design.

The relationships of the BMP9 SNPs in IPAH risk

Table 2. Genetic variants of the BMP9 gene and susceptibility of IPAH. 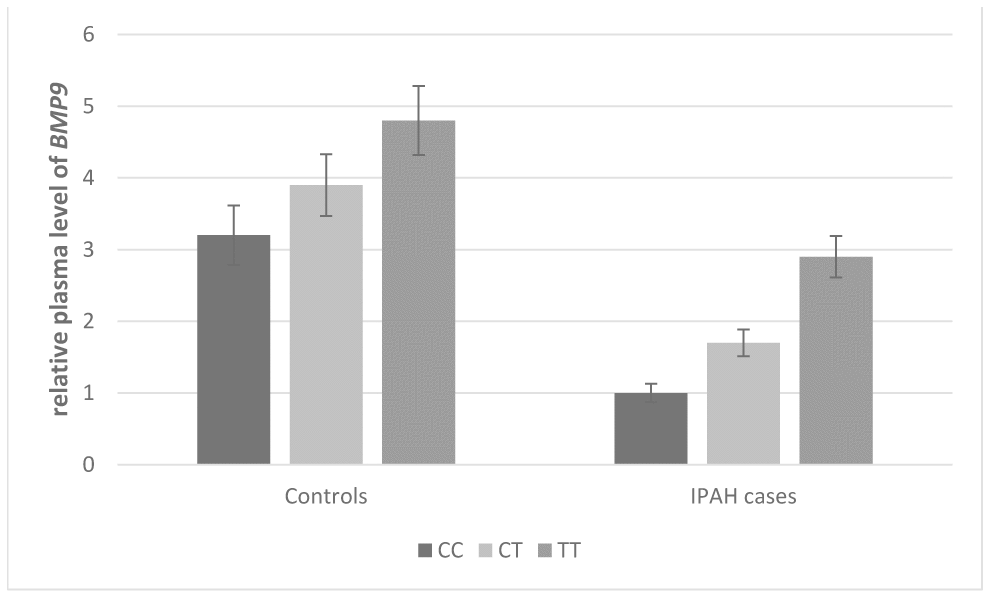 Figure 1. Effect of BMP9 rs3740297 on plasma level of BMP9. The plasma levels of BMP9 were relative to those with major homozygotes in IPAH cases. 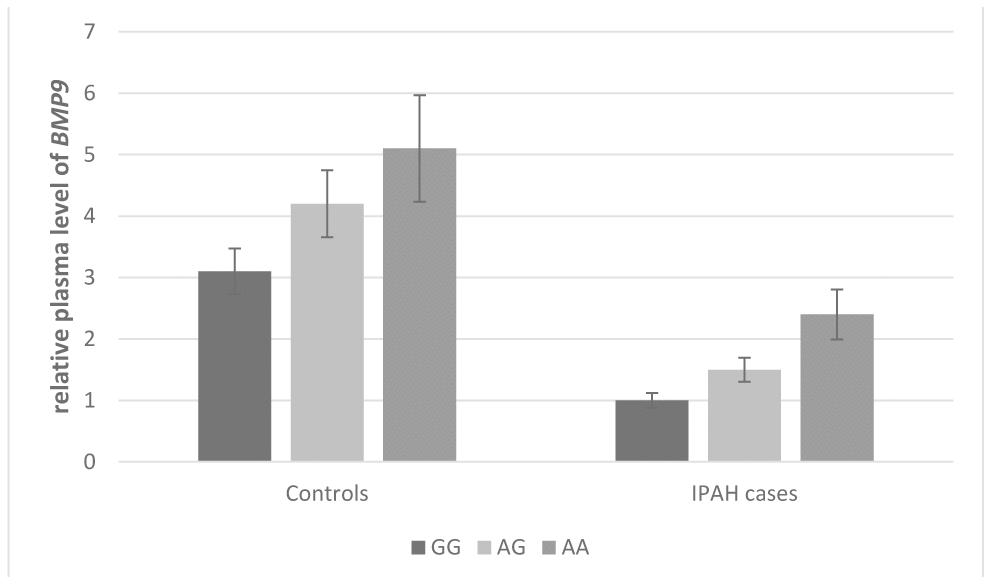 Figure 2. Effect of BMP9 rs7923671 on plasma level of BMP9. The plasma levels of BMP9 were relative to those with major homozygotes in IPAH cases.

HaploRegv4.1 and miRNASNP V2 were used to annotate the functional elements for BMP9 rs3740297 and rs7923671. We found that rs7923671 was located at a locus with multiple transcription factor (Myc, Pax-2, Pou5f1, P300) binding site, and rs3740297 was located at the 3’ UTR region of the BMP9 gene and its C>T transition could cause a binding site loss of miR-149 (Figure 3B), which suggest their potential allele-specific regulatory effect. To verify our hypothesis, we first measured the expression level of miR-149 in plasma of and PASMC cells, respectively. As shown in Figure 4, the expression level of miR-149 was not influenced by the genotypes of SNP rs3740297, as well as the disease status of IPAH (P >0.05). Meanwhile, the PASMC cells transfected with vectors containing the C allele of rs3740297 showed identical expression level of miR-149, compared to those containing the T allele (Figure 5A, P >0.05). 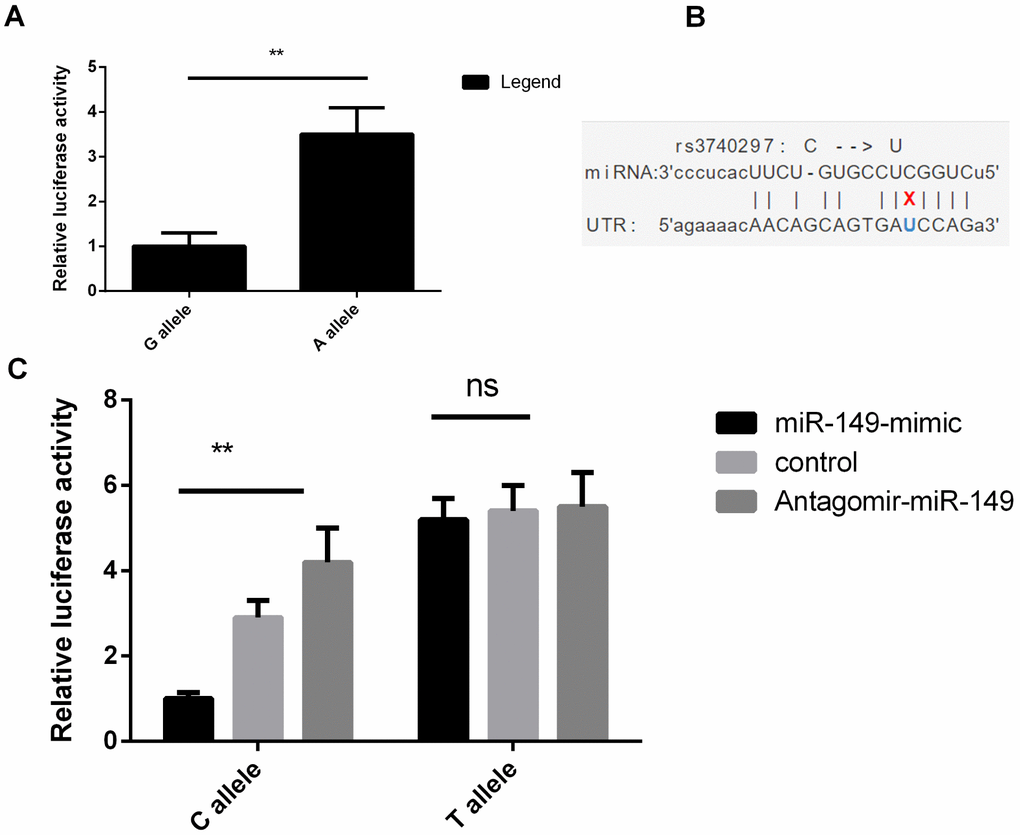 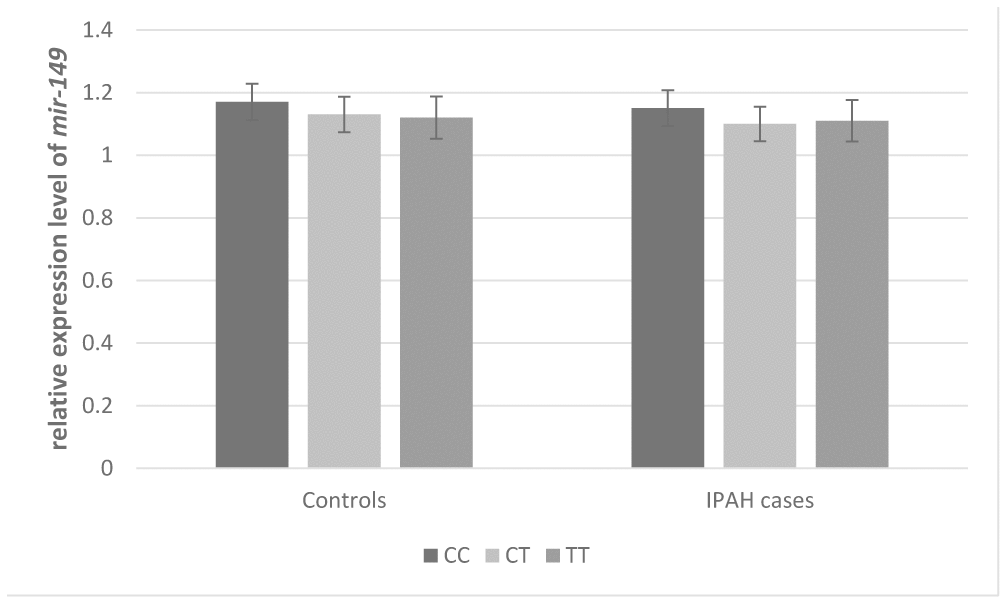 Figure 4. Effect of BMP9 rs3740297 on plasma level of MIR-149. The plasma levels of BMP9 were relative to those with major homozygotes in IPAH cases.

The genetic basis of IPAH has been studied extensively, and the candidate gene approach of genetic association studies have identified many loci for the susceptibility of IPAH, although large part still remains unclear [13–18]. Different with heritable PAH which mainly caused by the mutation of the BMPR2 gene, the genetic etiology of IPAH is more complex [19]. In 2009, as a landmark event, Yu et al. [20] revealed that -254 (C>G) SNP in the TRPC6 gene promoter may predispose individuals to an increased risk of IPAH by linking abnormal TRPC6 transcription to nuclear factor-kappaB. Following that, genetic variants in vascular endothelial growth factor (VEGF), Rho/Rac guanine nucleotide exchange factor 18 (ARHGEF18), lncRNA metastasis associated lung adenocarcinoma transcript 1 (MALAT1), superoxide dismutase 2 (SOD2), and many more were identified to be associated with the susceptibility of PAH consecutively [13, 14, 16, 17].

The BMP9 gene, which was located at 10q11.22, owns two exons, and belongs to the transforming growth factor beta superfamily. It contains an N-terminal TGF-beta-like pro-peptide and a C-terminal transforming growth factor beta superfamily domain [21]. In Nikolic’s study, BMP9 was identified as a sensitive and specific biomarker of PoPH, which could predict transplant-free survival and the presence of PAH in liver disease [10]. In current study, we also found the plasma level of BMP9 in IPAH cases was significantly lower than that in controls, which indicated the potential as a plasma biomarker for IPAH. Besides, genetic variations of the BMP9 gene have been linked to many diseases [9, 12, 22–24]. Ren et al. [22] found that allele C of BMP9 rs7923671 (P = 0.0026; OR: 1.33, CI: 1.10–1.60) was significantly associated with risk of Ossification of the posterior longitudinal ligament (OPLL), which had the same direction with our findings.

In our study, BMP9 rs3740297, which was predicted to locate at the binding site of miR-149, was significantly associated with increased plasma level of BMP9 and decreased susceptibility of IPAH. We have 93.2% statistical power for rs3740297 to detect such a genetic association. Xie et al. [25] previously identified that miR-149 promotes human osteocarcinoma progression via targeting BMP9. In our study, we also tested whether interaction between miR-149 and BMP9 existed in a rs3740297 allele-specific manner in PASMC cells, and confirmed that rs3740297 C allele (major allele) was a target of miR-149. Taking together, these results indicate that miR-149 is an inhibitor of BMP9 [C] but not BMP9 [T]. This means minor allele T of BMP9 rs3740297 could significantly decrease susceptibility of IPAH in Chinese population, possibly by up-regulating BMP9 expression through losing a miR-149 binding site.

Conclusively, this study provides evidence for genetic associations between two specific variants in the BMP9 gene and plasma level of BMP9, as well as the occurrence of IPAH. The results could contribute to the understanding of the mechanisms and molecular etiology of IPAH, which might lead to further biomedical or functional studies and recommendations for biomarkers of disease screening and personalized prevention that will finally reduce the incidence of this disease.

We totally recruited 836 IPAH cases, and 900 frequency-matched healthy controls by age and gender. All patients were primarily diagnosed by pulmonary angiography and right heart catheterization. The diagnosis of IPAH was made by at least 2 experienced PAH experts according to WHO criteria that a mean pulmonary arterial pressure equal to or exceeding 25 mmHg associated with normal pulmonary capillary wedge pressure. Patients with heritable, and associated PAH were not included in the present study. Controls were enrolled from the normal physical examination during the same period. Each participant was interviewed face to face to collect the demographic information. After that, each subject was asked to donate 10 mL of peripheral venous blood using sodium ethylene diamine tetra -acetic acid (EDTA) tubes. After centrifugation at 3000 × g and 4 °C for 15 minutes, the supernatants and cell sediment were frozen at -80 °C, respectively. All patients provided informed consent for participation and recruitment protocols were approved by the institutional review boards of Zhongshan Hospital.

The tagSNPs covering the BMP9 gene and its 5kb flanking region were selected from 1000 genome CHB data (phase 3, minor allele frequency ≥ 5%, pairwise r2 ≥ 0.8) using the Haploview 4.2 software. Finally, five SNPs (rs3740297, rs7923671, rs73299055, rs3781226, rs4922508) were selected as the candidates. Genomic DNA was extracted from the stored cell sediment of the blood samples using a DNA Blood Mini Kit (Qiagen, Valencia, CA, USA) according to the manufacturer’s protocol. The genotyping for the SNPs was performed using the TaqMan allelic discrimination assay on an ABI 7900 system (Applied Biosystems Inc, Foster City, CA, USA). A random 10% samples for each of the five SNPs were repeatedly genotyped and the concordance rate was 100%.

The plasma level of BMP9 in 100 randomly selected IPAH cases and 100 randomly selected controls was measured using a Sandwich Enzyme-linked Immunosorbent assay (ELISA) kit (R&D Systems, Minneapolis, MN) according to the manufacturer’s protocol, respectively. The inter-assay coefficient of variation was 8%, and the intra-assay coefficient of variation was 5%. All the assays were replicated in three times independently.

Total RNA was extracted from plasma and PASMC cells using TRIzol reagent (Invitrogen, Carlsbad, CA, USA). Then cDNA was synthesized with M-MLV reverse transcriptase (Invitrogen). Real-time reverse transcription-polymerase chain reaction (RT-PCR) with SYBR Green assay (TaKaRa Biotechnology, Dalian, China) was performed to examine expression level of miR-149 and the BMP9 gene. Glyceraldehyde 3-phosphate dehydrogenase (GAPDH) was used as an internal control. The assay was conducted using the ABI 7300 system (Applied Biosystems). All reactions were done in triplicate and the expression level was calculated according to the equation 2-Δ Δ Ct.

All analyses were conducted with SAS 9.3 software (SAS Institute, Inc., Cary, NC, USA), and a P value of < 0.05 for two-side was considered statistically significant. Differences in the distribution of selected demographic variables were evaluated by Pearson’s χ 2 test. For quantitative variables, statistical significance was determined using unpaired t-test or one-way ANOVA. Hardy-Weinberg equilibrium (HWE) for each SNP among controls was tested using a goodness of-fit χ 2 -test. The associations of each SNP with IPAH susceptibility were estimated by unconditional logistic regression analyses with odds ratios (ORs) and 95% confidence intervals (CIs), adjusted for age, gender, smoking and drinking status, and body mass index (BMI).

C.J. and G.K. conceived and designed the research and supervised the studies. G.K., X.L., J.L., W.H, R.Y., H.Y., and Y.Y performed the experiments and analyzed data. C.J. and G.K. wrote the manuscript.

This study was supported by the Clinical Research and Cultivation Project of Zhongshan Hospital of Fudan University (2018ZSLC31).