Esophageal cancer (EC) is one of the most common malignant tumors of the digestive tract, representing a serious threat to human health and life [1]. Esophageal squamous cell carcinoma (ESCC) is the major pathological type of EC, accounting for ~85% of all patients [2]. Radical surgery, radiotherapy and chemotherapy are the main treatments for EC [3, 4]. However, the overall prognosis of patients with EC remains poor and the infiltration and metastasis of this tumor is the major cause of treatment failure and mortality [5].

Non-coding RNA (ncRNA) is a type of RNA that serves various regulatory functions [6]. Circular RNA (circRNA) is a novel class of endogenous ncRNA with covalently linked 3’- and 5’-ends, creating a closed-loop structure that is not easily degraded by exonucleases [7]. The abnormal expression of circRNAs is observed in various tumors, suggesting that circRNAs are involved in tumorigenesis and cancer progression [8]. Recent studies have revealed that circRNA serves a regulatory role by competitively binding to miRNA, ultimately affecting target gene expression [9]. CircRNAs are considered to be one of the most ideal and specific biomarkers for patient diagnosis and prognosis in various types of cancer [10]. 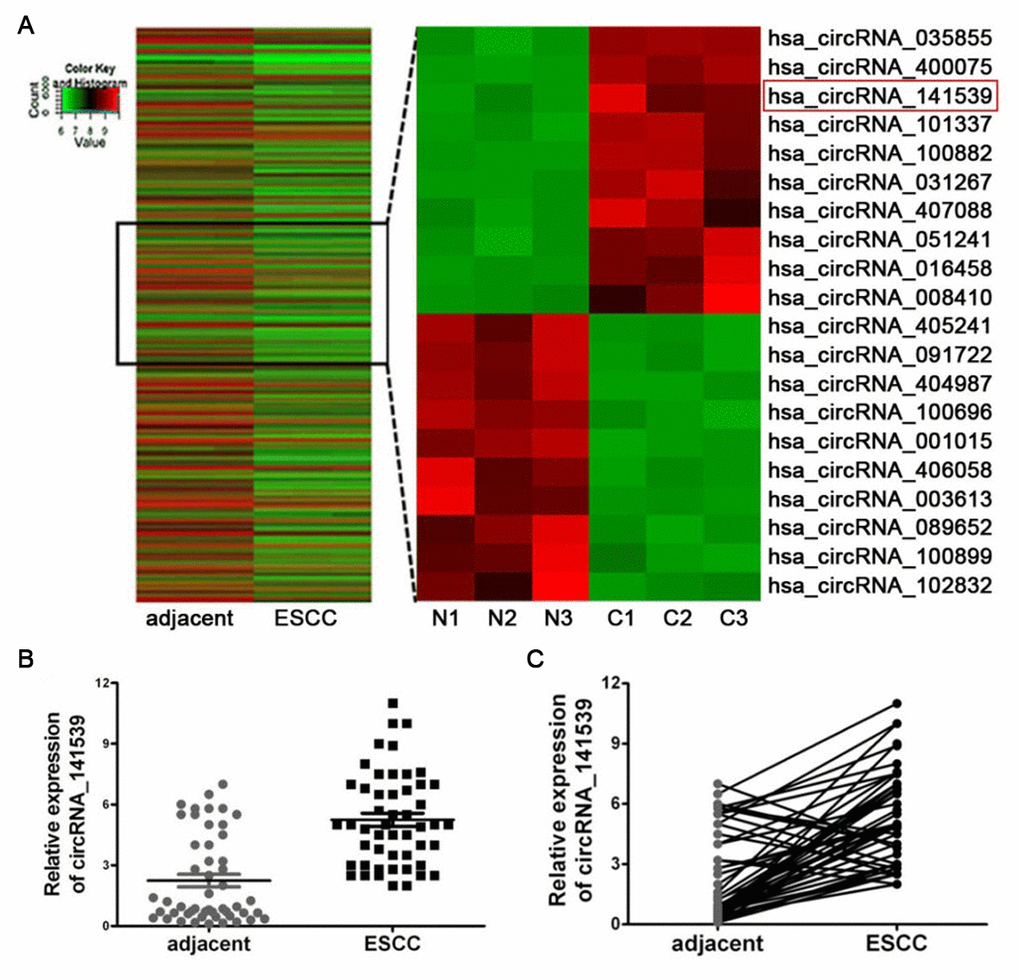 circRNA_141539 is associated with patient diagnosis and prognosis in ESCC 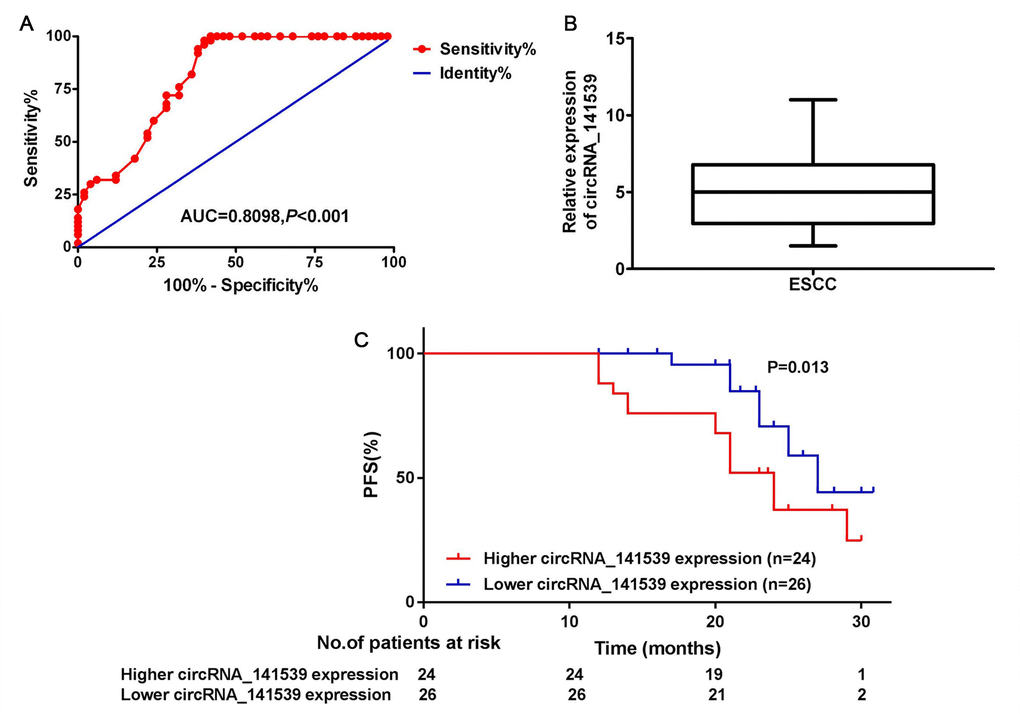 circRNA_141539 is associated with clinicopathological characteristics in patients with ESCC 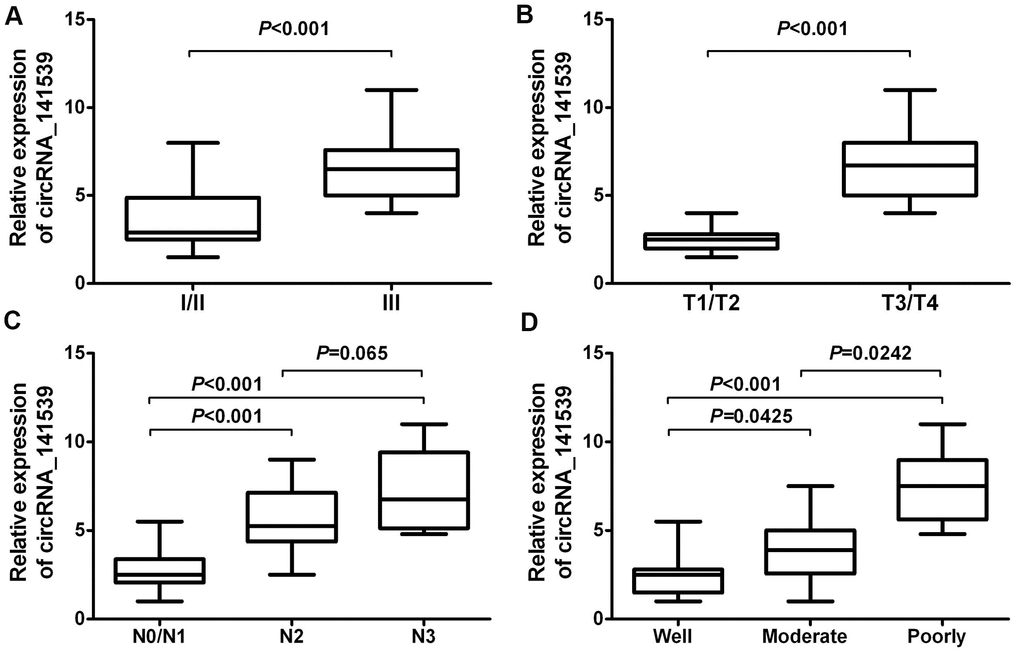 Figure 3. circRNA_141539 was associated with clinicopathological characteristics in ESCC. (A) The association of circRNA_141539 with TNM stage, (B) with T stage, (C) with N stage, and (D) with histological grade. 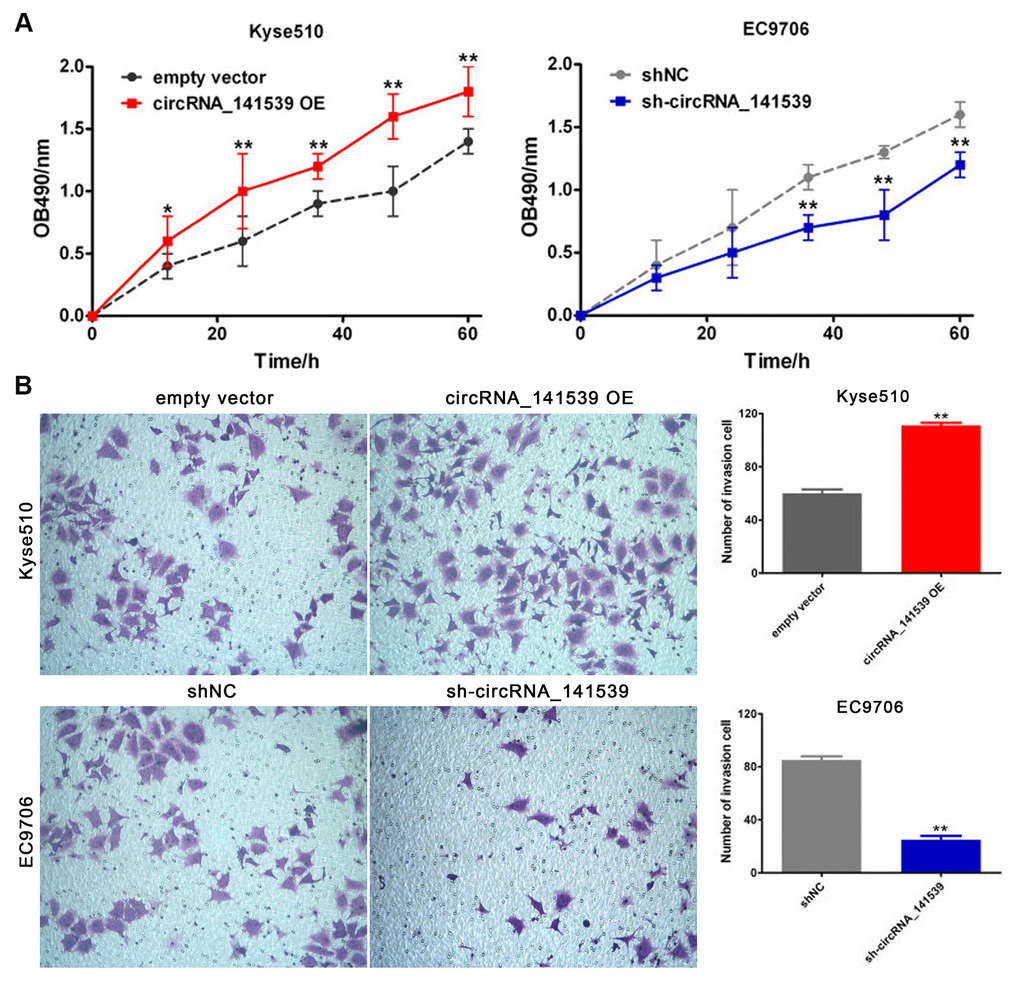 The miR-4469 mimic and inhibitor were transfected into Kyse510 and EC9706 cells. RT-qPCR showed that miR-4469 was significantly increased in the mimic group, and reduced in inhibitor group, compared with the group (Supplementary Figure 2A, 2B, both P<0.05).Dual-luciferase reporter assay was performed to determine whether CDK3 was a direct target of miR-4469. The schematic diagram revealed that miR-4469 specifically binds to the Wt 3’-UTR sequence of CDK3 (Figure 6A). The results also demonstrated that relative luciferase activity in the psiCHECK2-CDK3-3'-UTR-wt and miR-4469 mimic co-transfection group was significantly lower compared with miR-4469NC or psiCHECK2-CDK3-3'-UTR-mut groups. However, no significant differences were identified in the psiCHECK2- CDK3-3'-UTR-mut group compared with the miR-4469 mimics and miR-4469 NC groups (Figure 6B; P<0.05). Additionally, the results of RT-qPCR indicated that CDK3 mRNA was significantly up-regulated in ESCC tissues (n=50) compared with corresponding adjacent tissues (Figure 6C; P<0.05). Pearson's correlation analysis also demonstrated that CDK3 mRNA was negatively correlated with miR-4469 expression (Figure 6D; P<0.05). Furthermore, western blotting and RT-qPCR results confirmed that CDK3 protein and mRNA expression were significantly and negatively regulated by miR-4469 in Kyse510 and EC9706 cells (Figure 6E, 6F; P<0.05).

miR-4469 and CDK3 are associated with clinicopathological characteristics in ESCC 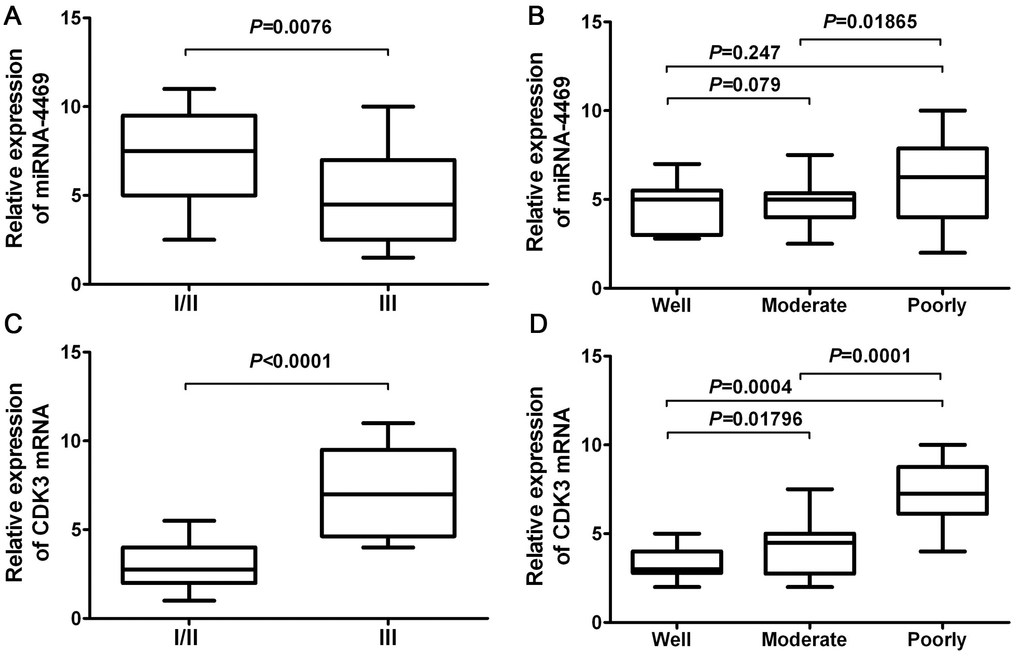 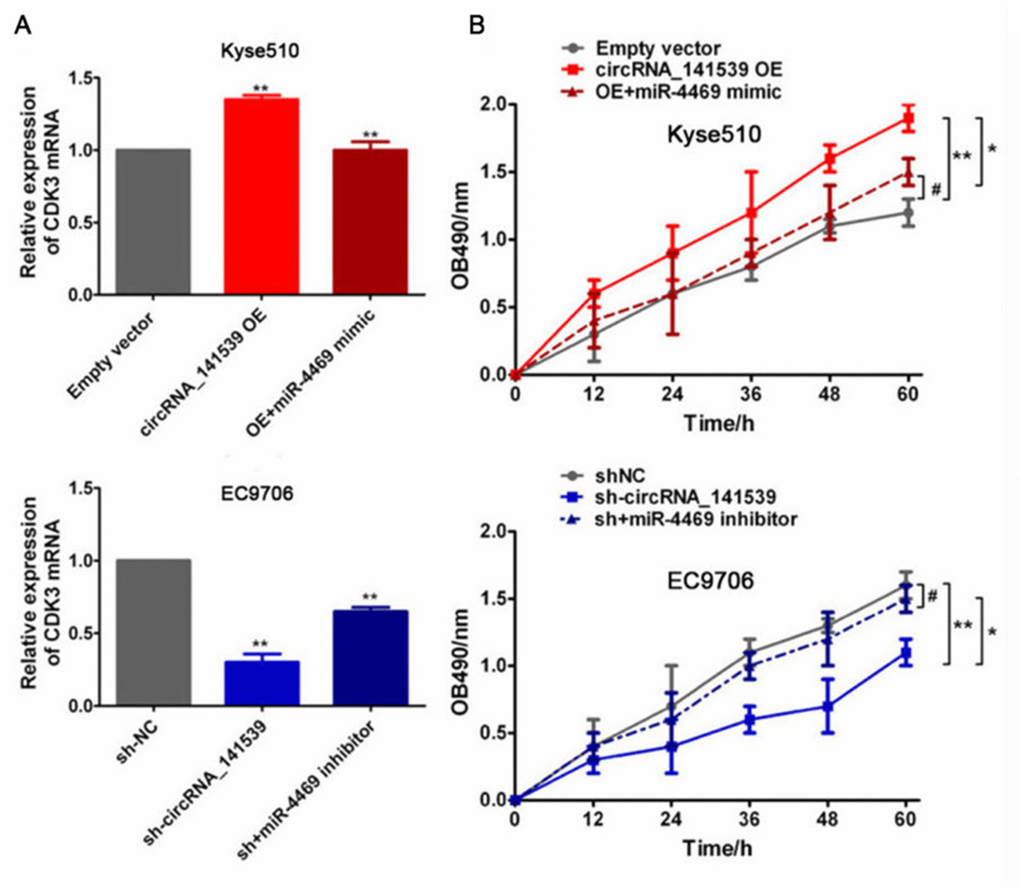 CircRNA is characterized by a covalent closed loop that lacks 5’ caps and 3’ tails, which is conserved and stably expressed in mammalian cells. Recent studies [11–13] have revealed that circRNAs are abnormally expressed and serve important roles in the development and progression of cancer, serving as potential diagnostic biomarkers and therapeutic targets for patients. Additionally, the function of the circRNAs-miRNA-gene axis in the development and progression of various types of cancer is being elucidated. For example, the circ_0016788/miR-486/CDK4 axis regulates hepatocellular carcinoma tumorigenesis [14, 15]. Furthermore, the circRNA_0084043/miR-153-3p/Snail axis promotes malignant melanoma progression [16, 17] and the circRNA-000911/miR-449a/Notch1 axis promotes chemotherapy resistance in breast cancer [18, 19].

To the best of our knowledge, the present study was the first to assess circRNA_141539 in the occurrence and development of ESCC. Very limited data regarding circRNA_141539 is available. However, Liu et al [20] reported that circRNA_141539 was significantly up-regulated in cervical carcinoma and was correlated with FIGO stage and pathological grade. In the present study, the results revealed that circRNA_141539 was up-regulated and acted as an oncogenic factor in ESCC. Furthermore, high circRNA_141539 expressions were significantly associated with TNM stage, differentiation and poor prognosis, and exhibited high diagnostic value in patients with ESCC. The results indicated that circRNA_141539 may serve as a biomarker for the diagnosis and prognosis of patients with ESCC. Although the sample size of the current study included >50 tissues, large-scale clinical validation is still required. Also, in vivo experiments are fundamental as a mandatory step of the bench work to achieve a better correlation with the clinical implications, so further validation in vitro was also required in the future.

It is well known that circRNA affects miRNA-target gene expression. The results of the dual-luciferase reporter assay performed in the current study identified that circRNA_141539 directly binds to miR-4469 and that CDK3 is negatively regulated by miR-4469. A previous study [21] reported that miR-4469 was significantly down-regulated in breast cancer and that miR-4469 suppressed breast cancer metastasis by inhibiting the Wnt/β-catenin pathway. CDK3 is a member of the cyclin-dependent kinase family and is directly involved in cell cycle regulation for G1 exit and S entry [22, 23]. The activation of CDK3 leads to G1 arrest and serves an important role in cell proliferation and malignant transformation [24]. CDK3 is abnormally expressed in several types of cancer, including gastric cancer, lung cancer, liver cancer, pancreatic cancer, colorectal cancer, head and neck squamous cell carcinoma, cervical cancer and breast cancer [25]. Furthermore, CDK3 expression may be regulated by certain miRNAs in a variety of different cancers, including miR-873 [26], miR-125a-3p [27] and miR-150 [28]. Also, there are some other factors that can regulate CDK3 expression such as NFAT3, pRb and Ik3-2 gene. MicroRNAs are only one of the important parts of the regulatory mechanism of CDK3.The results of the present study indicated that miR-4469 was down-regulated and CDK3 was up-regulated in ESCC tissue. In addition, miR-4469 was associated with TNM stage and CDK3 expression was associated with TNM stage and histological grade in patients with ESCC. The rescue assays performed in the current study indicated that miR-4469 reversed the effects of circRNA_141539 on cell proliferation. The results indicated that circRNA_141539 promoted ESCC progression via the miR-4469/CDK3 pathway. However, the underlying mechanism still requires further elucidation.

ESCC tissues and adjacent non-cancer tissues (50 pairs) were obtained from patients admitted to the First Affiliated Hospital of China Medical University from February 2016 to August 2017. All tumor samples were obtained following surgery and stored in liquid nitrogen at -80° C until further use. Additionally, all samples were confirmed via histopathology and the clinicopathological features of tissue were determined (Supplementary Table 2). Patient follow-up started from the date of surgery until the disease procession or the last follow-up (median follow up period, 23 months, the maximum follow-up time, 31months). In addition, the following human ESCC cell lines were purchased from the Cell Bank of Type Collection of the Chinese Academy of Sciences: Kyse410, Kyse510, EC9706, ECA109 TE7 and Het-1A. All experiments performed in the study current were approved by the Hospital Ethics Committee.

Total RNA was isolated using the TRIzol® reagent. The forward (F) and reverse (R) primers utilized in RT-qPCR were designed and synthesized by GeneChem, Inc. The sequences were as follows: circRNA_141539 F, 5’-CAGCTGTGACAGCATGATGA-3’ and R, 5’-TCGGGCAT CACCCGAAACAA-3’; miR-4469 F, 5’-GAATTCATCTCGACACGC-3’ and R, 5’-A CTCG GCAG CACAGACAG-3’; CDK3 F, 5’-CCAGCTCTTTCGTATCTTTCGT-3’ and R, 5’-TTCCTGGTCCACTTAGGGAAG-3’. RNA was reverse transcribed into cDNA using the High-Capacity Reverse Transcription kit and RT-qPCR was performed with the SYBR Green PCR Master mix system. Relative expression was calculated using the 2−Δ∆Ct method. RNA levels were normalized to GAPDH (for circRNA_141539 and CDK3 mRNA) or U6 (for miR-4469).

Transfected ESCC Kyse510 and ECA109 cells in the logarithmic growth phase were seeded into 96-well culture plates and incubated for 0, 12, 24, 48 and 72 h at 37° C with 5% CO2. Following culture for various durations, MTT solution (20 μl; 2.5mg/ml) was added to each well for 4 h. Subsequently, dimethyl sulfoxide (100 μl) was added to each well to dissolve the resulting crystals. Absorbance values at 490 nm (OB490 nm) were measured using an FL600 microtiter plate reader.

Transfected ESCC Kyse510 and ECA109 cells in the logarithmic growth phase were digested, counted and seeded into the upper membrane of a Transwell chamber. The lower chamber was coated with fibronectin (1 mg/ml) and medium containing 20% fetal bovine serum. After culture for 24 h, cells that passed through the fibronectin layer were fixed with 2% paraformaldehyde and stained with crystal violet. Stained cells (invading Kyse510 and ECA109 cells) were subsequently observed and imaged under an Olympus microscope (magnification, x400). The number of stained cells was counted with ImageJ 1.47 software (National Institutes of Health) in five random fields of view.

Wild-type (Wt; circRNA_141539-Wt and CDK3-Wt) or mutant (mu; circRNA_141539-Mu and CDK3-Mu) psiCHECK2 plasmids were designed and synthesized by GeneChem, Inc. Plasmids were co-transfected into Kyse510 and ECA109 cells with miR-4469 mimics and miR-4469 NC according to the manufacturer’s protocol. Luciferase assays were performed using a dual-luciferase reporter gene assay kit. Mu plasmids were used as controls. Luciferase activity was measured using the dual-luciferase reporter gene assay system and Renilla luciferase activity was normalized against that of firefly luciferase. The aforementioned processes were conducted by GeneChem, Inc.

SPSS17.0 statistical software (version 7.0) and GraphPad Prism (version 5.01) were used for statistical analysis. Experiments were repeated at least three times and data are presented as the mean ± standard deviation (x±s; α=0.05). The chi-square test, Kaplan-Meier method and Multivariate Cox analysis were performed to investigate the association between circRNA_141539 expression and the clinicopathologic characteristics and prognosis of patients with ESCC. Paired and independent t-tests or rank-sum tests were applied when only two groups were compared, whereas comparisons among multiple groups were analyzed via one-way analysis of variance followed by Tukey's multiple comparison test. P<0.05 was considered to indicate a statistically significant difference.