Copyright: © 2021 Ren et al. This is an open access article distributed under the terms of the Creative Commons Attribution License (CC BY 3.0), which permits unrestricted use, distribution, and reproduction in any medium, provided the original author and source are credited.

Adult neurogenesis is the key neural plasticity to regulates emotional and olfactory functions [7]. Neural stem cells (NSCs) resident at subventricular zone (SVZ) and hippocampus remain its proliferative activity and continuously differentiate into functional neurons, which are recognized to regulate the olfactory functions and antidepressant behaviors. NSCs in SVZ develop into neural progenitors and migrate to olfactory bulb to participate the encoding of olfactory memories. As in hippocampus, NSCs get commitment into adult neurons and regulates emotional functions by interacting with local circuit network. Thus, improving adult neurogenesis is the key target for antidepressant treatment and olfactory functional recovery as well. Intranasal treatment of the antidepressant might also effective in promoting neurogensis in olfactory system as thereby gain the antidepressant effects. It was widely reported that analogs of incretin glucagon-like peptide-1 (GLP-1) cannot only serve as the metabolic regulators but also play as the important neuroprotective agent. lixisenatide (LXT) a.k.a Adlyxin is the GLP-1 analog anti-diabetic medication. It mimics the effects of GLP-1 to control the blood glucose level [8]. It was reported that LXT could improvement behavioral functions in neurodegenerative diseases like Alzheimer’s disease and Parkinson’s disease [9, 10]. However, as one of the medication in anti-diabetic treatments, peripheral treatment of LXT or other metabolic drugs might adversely affect the blood glucose level. Other adverse clinical effects such as nausea, vomiting, and diarrhea were also reported [8]. Herein, a new treatment pathway is necessary for further apply LXT into neurological disorders. Given the importance of olfactory functions as well as the olfactory neurogenesis in depression treatment. Whether intranasal administration of LXT could obtain the antidepressant functions remains unknown. Exploring its effects and underlying mechanism could provide a new therapeutic method with better safety in antidepressant clinical practice. 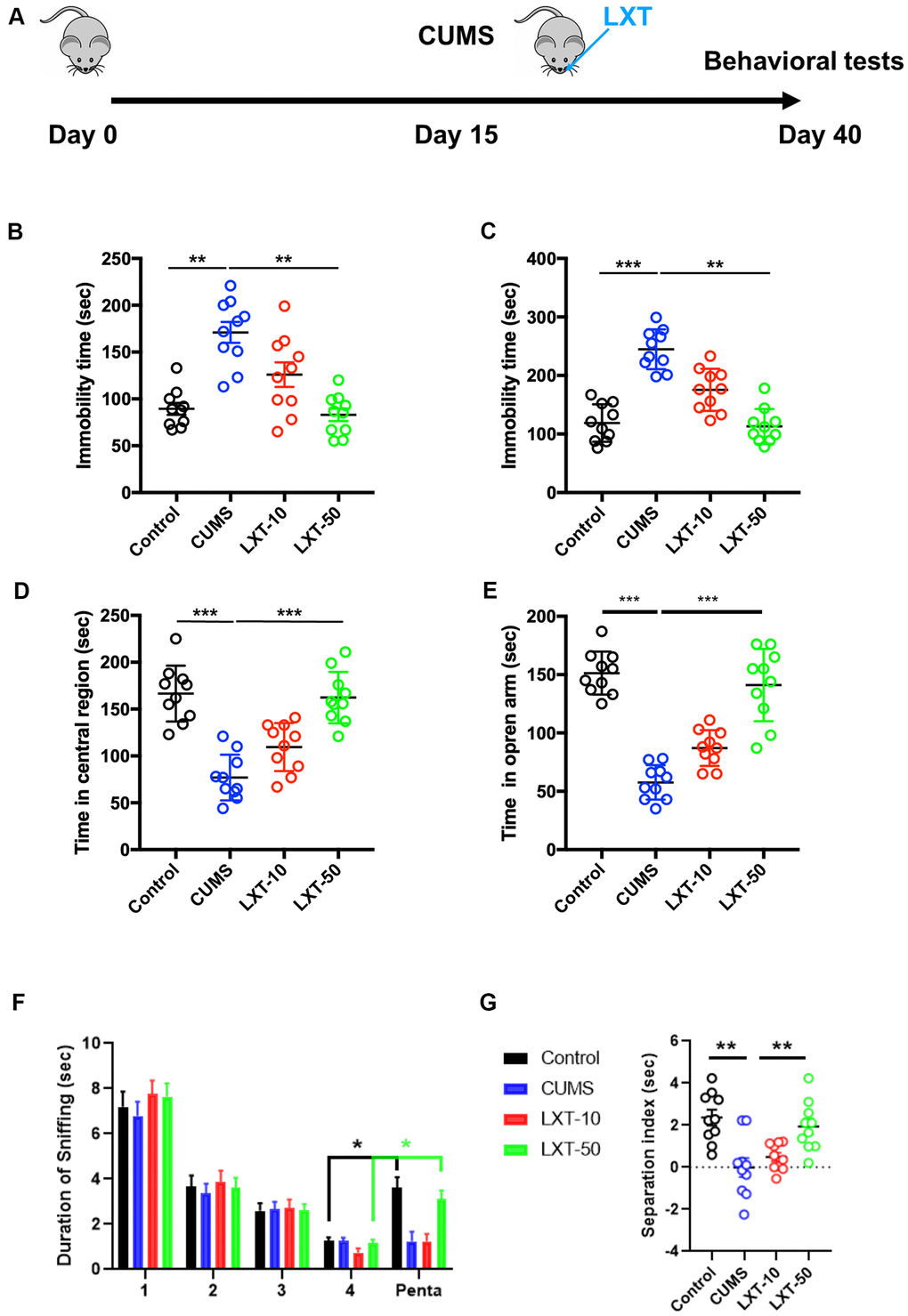 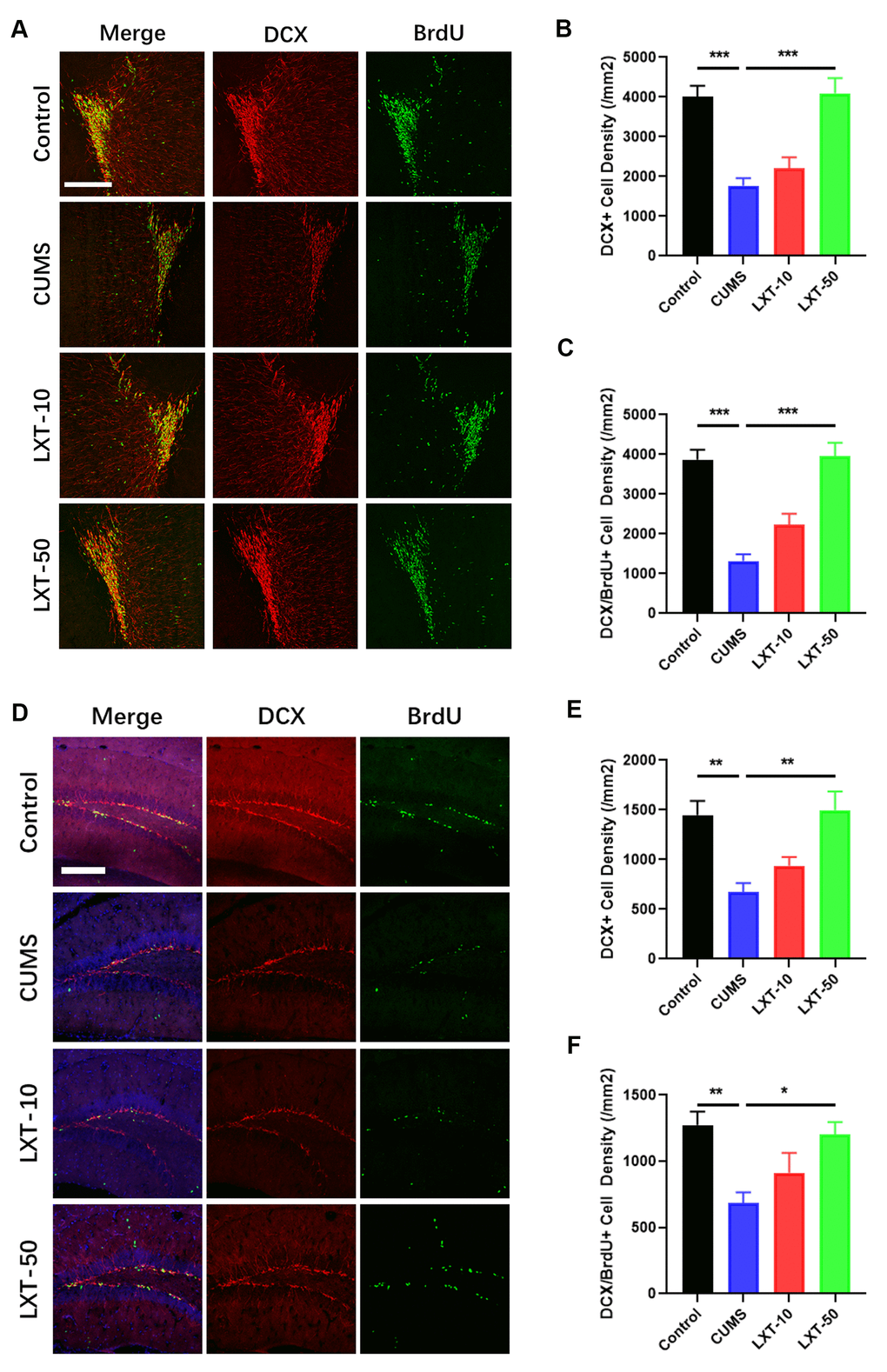 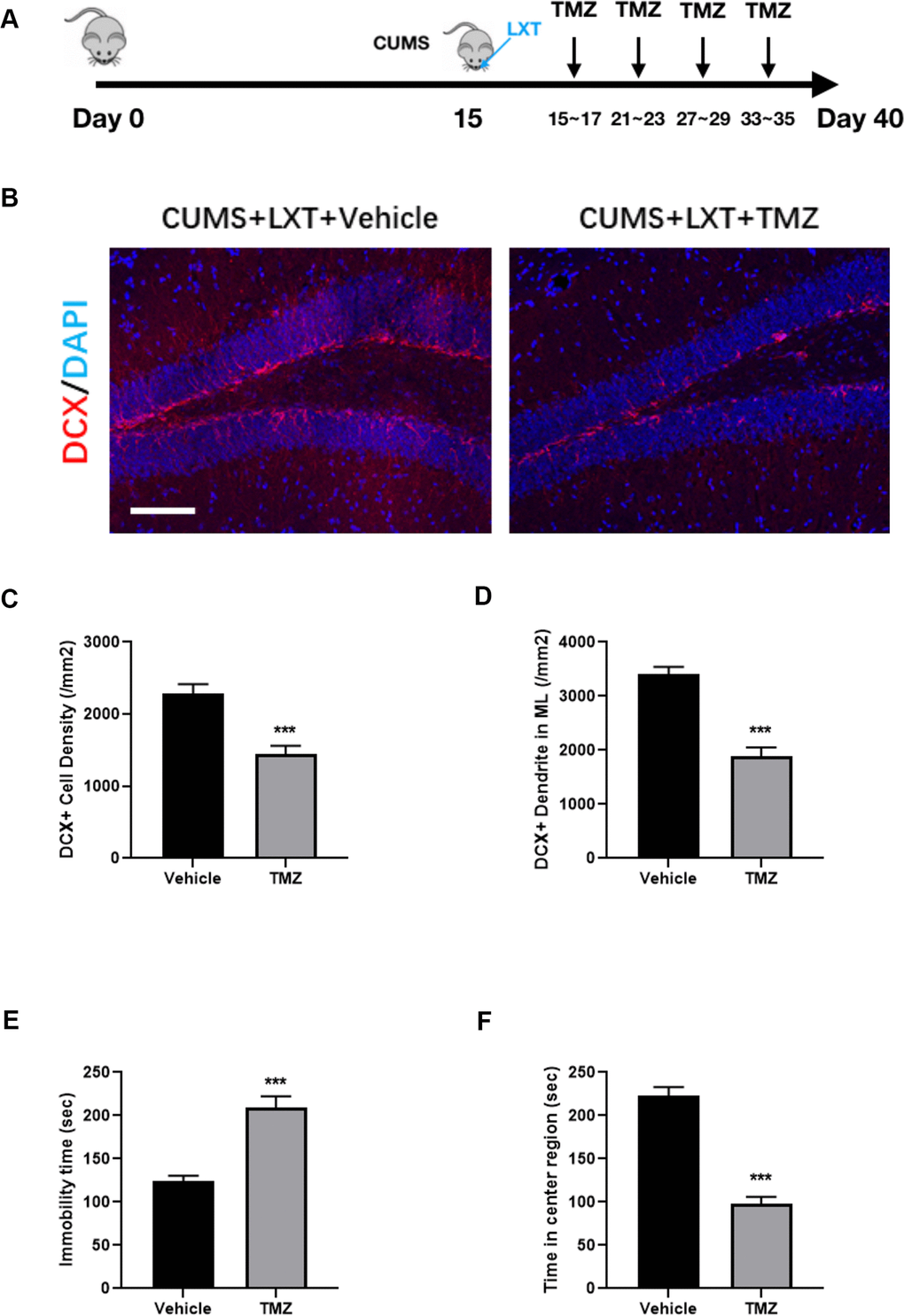 CREB pathway is the critical signaling to regulate adult neurogenesis. In hippocampal tissue, we observed that LXT intranasal treatment significantly elevated the CREB phosphorylation level at Ser133 in comparing with CUMS mode, which suggesting LXT recovered the activity of CREB (Figure 4A, 4B, one-way ANOVA, p<0.05, LXT50 vs. CUMS). This result indicates that CREB might be one of the important regulators involving with the effects of LXT to improve behaviors via promoting neurogenesis. To further confirm the role of CREB signaling in therapeutic effects of LXT intranasal treatment, we injected the treatment mice with 666-15 to inhibit the activation of CREB (Figure 4C, 4E). By labelling the immature neurons in hippocampal DG region with DCX, we detected that 666-15 administration to LXT treatment group remarkably decreased the density of DCX+ immature neuronal density (Figure 4D, 4E, one-way ANOVA, p<0.05 CUMS+LXT50 vs. CUSM+LXT50+666-15). Behavioral test showed that 666-15 treatment prolonged the immobility time in FST and inhibited the duration of sniffing to Penta in olfactory discrimination test (Figure 4F, one-way ANOVA, p<0.05 CUMS+LXT50 vs. CUSM+LXT50+666-15; G, two-way ANVOA, p<0.001, CUMS+TLX50 trail 4 vs. Penta; in significance, p=0.9937, CUMS+TLX50+666-15 trail 4 vs. Penta). These two behavioral tests indicate that inhibition of CREB signaling blocked the behavioral effects of LXT with intranasal treatment. Thus, CREB mediated adult neurogenesis the critical mechanism underlying the effects of LXT intranasal treatment to depression. 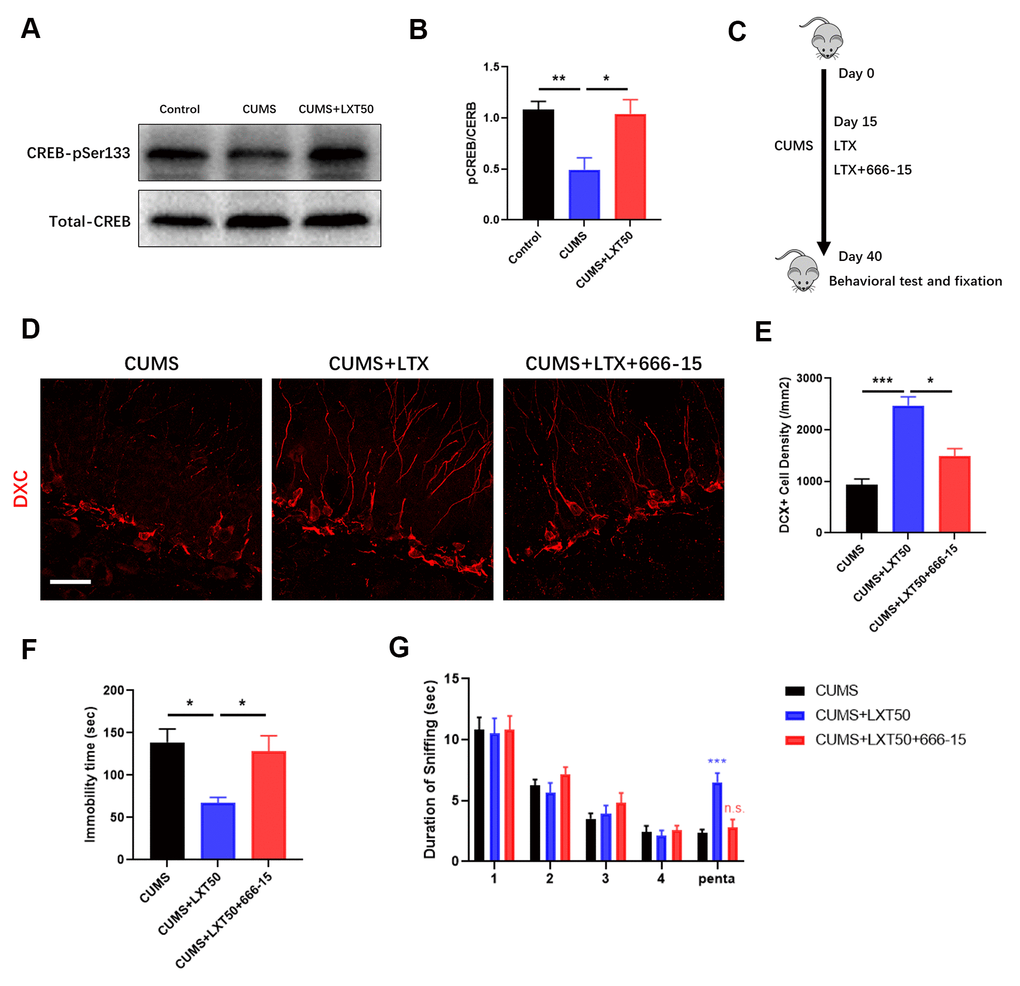 Previous publications indicated that GLP-1 analogs have significant neuroprotective effects in neurodegenerative diseases including Alzheimer’s disease (AD), Parkinson’s disease (PD) and stroke [12, 13]. The effectiveness of incretins to neurodegenerations as well as close relationship between neurodegenerations and metabolic disorders suggest the possibility to use anti-diabetic drugs for neuroprotection. Indeed, the intranasal treatment of insulin has been proved could attenuate the symptoms in AD and mild cognitive impairment [14]. Improvement of olfactory functions was also indicated as the alternative strategy for antidepressant therapy [15]. Treatment of antidepressant including fluoxetine and natural compound baicalin were also demonstrated could improve the olfactory and depressive like symptoms in depression model [4, 6]. In this study, we used intranasal treatment of LXT to CUMS induced depression model. Long-term intranasal treatment of LXT improved the olfactory functions and obtained the antidepressant effects (Figure 1). Oral or injection administration of GLP-1 analogs or GLP-1R agonists were demonstrated with the antidepressant and pro-neurogenesis effects in depression model [16, 17]. Our behavioral results suggest that intranasal treatment of the GLP-1 analogs may also have the behavioral protection against depression.

CREB is the important signaling in regulating neural plasticity. Dysfunctional CREB mediated synaptic plasticity were considered plays the vital roles in neurological and psychiatric diseases [21, 22]. CREB can response to neurotrophic signaling and regulate the adult neurogenesis including survival, maturation and integration of new neurons [23]. With the inhibitor of CREB 666-15, we detected the prohibited neurogenesis in hippocampus as well as the decreased antidepressant effects of LXT intranasal treatment (Figure 4). The improvement effects of LXT in olfactory and emotional functions were all reduced by CREB administration. In conclusion, the CREB-mediated adult neurogenesis plays the key role in regulating the antidepressant effects of LXT. It was reported that CREB/CRTC2-dependent transcriptional pathway is critical for regulating glucose homeostasis by controlling production of GLP-1 [24]. Combined with the effects of TMZ reduced the LXT effects, our results indicate that CREB mediates the antidepressant effects of LXT by controlling adult neurogenesis (Figure 3). In conclusion, our study provides the effectiveness of intranasal treatment of LXT to reduce the depression induced emotional and olfactory dysfunctions. Moreover, CREB-mediated the adult neurogenesis plays the critical role in this effect. This study could offer the new evidence for exploring new antidepressant enabling intranasal treatment and the relative biological underpinning.

C57BL/6N mice (age of 8 weeks, male) were obtained from laboratory animal center in Shanxi Medical University. Mice were maintained in the standard environment (12 h light/dark cycle, with lights on at 8:00 A.M., ad libitum access to dry food pellets and water). All animal performance were followed the guidelines of the Committee for Research and Ethical Issues of the International Association for the Study of Pain and were approved by the Animal Care and Use Committee of Shanxi Medical University Research Ethic Committee. After a 1-week adaptation period, mice were processed for the chronic unpredictable mild stress (Figure 1A). Briefly, the CUMS paradigm consisted in exposure, once daily, to one of the following aversive stressors: restraint-mice were placed in a 50 ml plastic tube (Falcon) with openings in both sides for breathing, for 1 h; shaking-groups of five mice were placed in a plastic box container and placed in an orbital shaker for 1 h at 150 rpm; social defeat-mice were introduced in a cage of an aggressive mice and after being defeated, they were placed in a transparent and perforated plastic container, to avoid further physical contact, inside the resident homecage for 30 min; hot air stream-mice were exposed to a hot air stream from a hairdryer for 10 min; overnight illumination-mice were exposed to regular room light during the night period; inverted light cycle-regular room light was off during daytime and on during nighttime for 2 days; tilted cage-homecages were tilted in a 45° angle during 1 h [25]. The process was repeated for 40 days, and the LXT treatment were conducting from the 15th day of modelling process. LXT were treated based on clinical dosage and separated with dosages as 10 nmol/kg and 50 nmol/kg, dissolved in PBS and performed intranasal treatment to mice with total volume of 50μl daily. The CREB inhibitor 666-15 (10 mg/kg) was injected to the mice with i.p. every two days. Administration was conducted using a gentle pipette of 2.5 μL per nostril with no anesthetics. Temozolomide (TMZ) was treated to the mice with i.p. on a daily dosage of 20mg/kg.

FST was conducted in a water tank (cylinder 30 cm height x 20 cm diameters). Mice were gently placed into the water and allowed for total 6 min free swimming. First 2 min was considered as the environmental habituation, and mobility time including swim and struggle in last 4 min was recorded to analyze the learned helplessness.

Mice were suspended on the tap-top of their tails for 6 min. Distance from mice nose to the floor was 25cm. The mobility time (excluding the swim-like oscillations and pendulum) was recorded as the indicator of depressive mood.

OFT was processed in the 40cm×40cm×40cm white box. Mice were put into the box with allowance of free movement for 10min. The time percentage of the mice in central regions (20cm×20cm in center) was analyzed for evaluating the anxiety mood.

Mice were performed with EPM to further confirm the anxiety mood. Mice were placed on the platform comprises two open arms (25 x 5 x 0.5 cm) across from each other and perpendicular to two closed arms (25 x 5 x 16 cm) with a center platform (5 x 5 x 0.5 cm), allowing for move freely for 10 min. The time of the mice staying on open arm were recorded for analyzing the anxiety-mood.

Mice were sacrificed with cardiac perfusion by 4% paraformaldehyde (PFA). Before cardiac perfusion, mice were anaesthetized with 100-200 mg/kg body weight for Ketamine and 5-16 mg/kg body weight for Xylazine injected intraperitoneally. Brain was collected and post-fixed in 4% PFA for 24 h. Tissue was then embedded after dehydration with 30% of sucrose. Hippocampal and olfactory bulb cryosections were prepared with 20μm thickness. Briefly, sections after antigen retrieve (pH 6.0 citrate acid) and washing with 0.3% TritionX-100 PBS were incubated with 5% goat serum (0.3 TritionX-100). For BrdU staining, sections were incubated with 2M HCl for 1 h at room temperature (RT) and wash with PBST for 3 times (15min each time). Primary antibodies (Mouse-anti-BrdU, CST, 1:400; Rabbit-anti-DCX, CST, 1:400) were incubated with tissue sections at 4° C overnight. Secondary antibodies (Goat-anti-Rabbit-Alexa fluor 488, ThermoFisher, 1:800; Goat-anti-Mouse-Alexa fluor 568, ThermoFisher, 1:800) were incubated with sections for 2 h RT. DAPI (Sigma) was incubated with sections for 10min. Tissue IF images were obtained with confocal microscopy (Carl Zeiss, LSM 700) with Z-stack for 20μm. Image was shown as maximum projection of Z-stack. Required positive cell number was calculated and displayed as the cell density per mm2.

All values are expressed as mean ± SEM. For analyzing across multiple groups, comparisons were performed by one-way or two-way analysis of variance (ANOVA) followed by multiple comparison test via GraphPad Prism 5 (GraphPad software Inc, CA, USA). Two group comparing was performed with student t-test. A p value of 0.05 was cut off as statistically significance.

All listed authors have no conflicts of interest.