Copyright: © 2021 Gao et al. This is an open access article distributed under the terms of the Creative Commons Attribution License (CC BY 3.0), which permits unrestricted use, distribution, and reproduction in any medium, provided the original author and source are credited.

As one of the most prevalent psychiatric disorders worldwide, major depressive disorder (MDD) not only increases the likelihood of negative lifestyle conditions, such as smoking, obesity and drug abuse [1, 2], but also imposes serious mental and economic pressure on the family and society [3]. Virtually all drugs used to treat depression target the same basic mechanisms identified more than 60 years ago, but these existing pharmacotherapies induce full remission in fewer than 50% of patients [4]. Recent neurobiological studies have highlighted the complexity of depression pathogenesis, which may involve dysregulation of the hypothalamic/pituitary/adrenal axis and the monoaminergic system as well as various neurotransmitters/neuromodulators, such as acetylcholine, GABA, substance P, cholecystokinin, and endogenous opioids [5–10]. Despite progress in such mechanistic investigations, the clinical treatment of MDD has remained largely restricted to symptomatic management.

As a central neurotransmitter system, the serotonergic system is responsible for modulating mood and emotion. Dysregulation of this system has been implicated in various psychopathological states including anxiety, depression, impulsivity, and aggression [11, 12]. The essential amino acid tryptophan (TRP) is a common precursor for the biosynthesis of the neurotransmitter serotonin (5-HT) and the metabolite kynurenine (KYN), which play apparently divergent roles in the pathophysiology of MDD [13]. Consistently, hypofunction of the serotonergic system is a salient clinical feature of MDD [14, 15]. It is noteworthy that majority of the 5-HT-producing neurons in the central nervous system (CNS) are located in the dorsal raphe nucleus (DRN) [16]. Histological studies of the DRN in the post-mortem tissues of suicide victims with MDD have revealed altered expression levels of 5-HT-specific markers, such as 5-HT1A and 5-HT2A receptors [17], and of certain transcription factors controlling gene expression in 5-HT neurons [18–21].

Notably, increased activity of indoleamine 2, 3 dioxygenase 1 (IDO1), the first and rate-limiting enzyme of the KYN pathway [22] has been associated with diminished CNS 5-HT content, which is negatively correlated with the severity of depression symptoms [13, 23]. On the other hand, elevated KYN production and neuroplastic changes mediated by its derivatives, such as quinolinic acid, seem to play detrimental roles in the development of depression [24, 25]. These findings raise the possibility that aberrations in TRP metabolism in the DRN (especially in terms of 5-HT content and IDO1 activity) may have strong implications for MDD pathogenesis.

The hippocampus has been extensively studied as a brain region vulnerable to stress and depression [26, 27]. As a pivotal memory processing centre, it is densely innervated by serotonergic neurons of the DRN and is populated by the majority of 5-HT receptor subtypes. Brain-derived neurotrophic factor (BDNF) is ubiquitous in various tissues of the CNS, where it regulates key cellular processes ranging from plasticity to neurogenesis. In MDD, reduced BDNF expression occurs as a consequence of compromised serotonergic signalling, leading to the development of hippocampal dysfunction [28]. Indeed, it has been demonstrated that hippocampal neurons undergo atrophy and downregulation of BDNF expression in response to unmitigated stress [29]. Moreover, our previous studies had demonstrated that depression induced by chronic stress could generate disorder of hippocampal blood oxygen level dependent (BOLD) signals, accompanied by the reduction of BDNF level and the number of adult neurons in the dentate gyrus.

In order to better understand how BDNF downregulation and neurogenesis hypofunction are linked to IDO1 dysregulation in chronically stressed hippocampus, both clinical study and experimental investigation in animal models are warranted. In this study, we conducted WT and IDO1 mutant mice studies with functional magnetic resonance imaging (fMRI) analysis to confirm that IDO1 was the critical regulator in biochemical imbalances of TRP metabolites, and disorder of brain BOLD signals in the pathophysiology of depression. We used the chronic unpredictable mild stress (CUMS) mouse model to reconstitute chronic stress conditions reminiscent of depression in order to testify hypotheses that IDO1 hyperactivity predicts 5-HT reduction, compromised brain function and lowered neurogenesis in the hippocampus in depressive disorder. Our findings thus shed light on a potential strategy for treating depression through pharmacologically targeting an under examined signalling pathway regulating TRP metabolism. 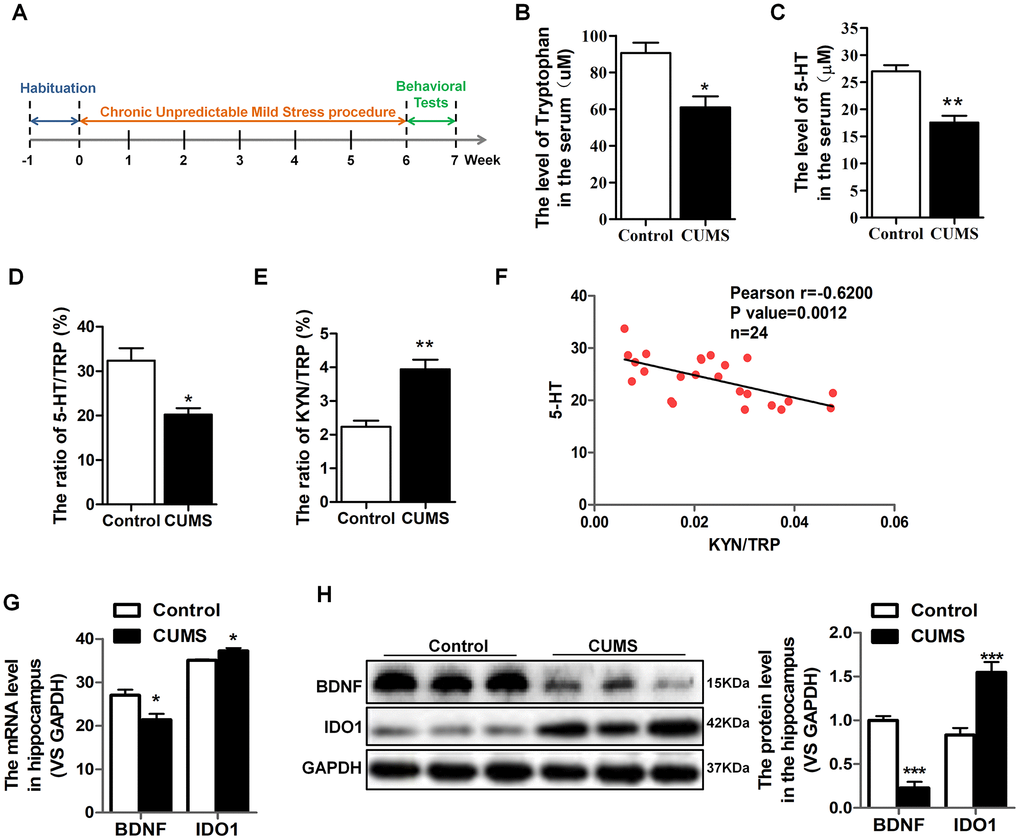 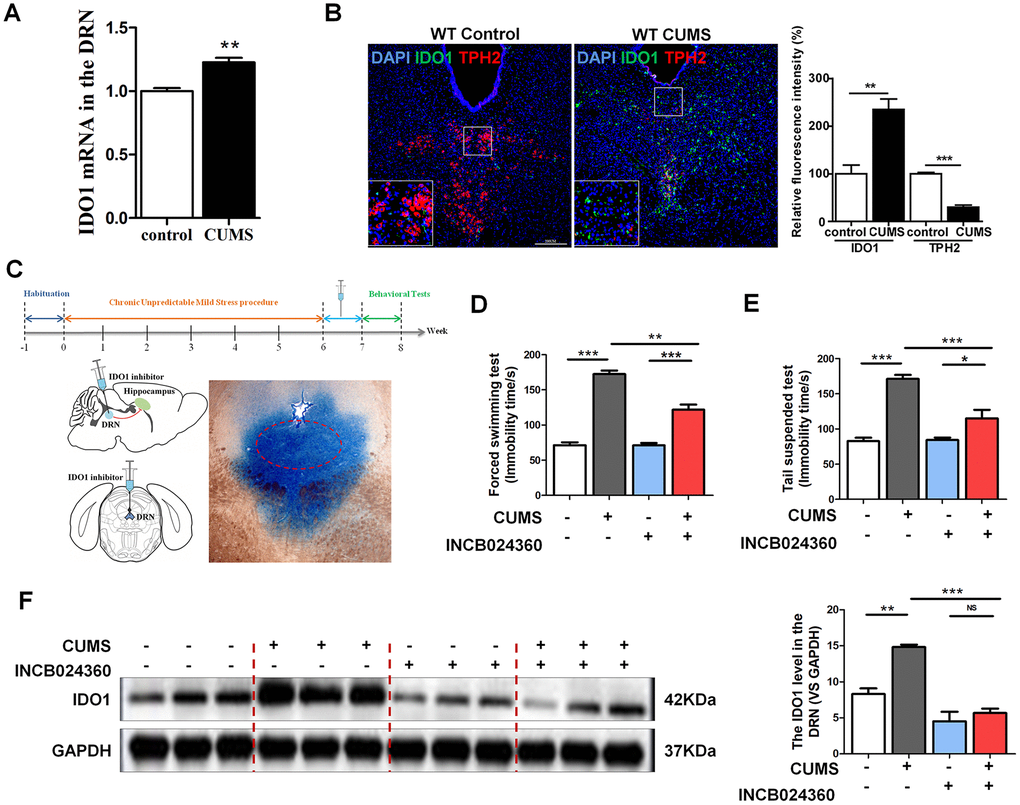 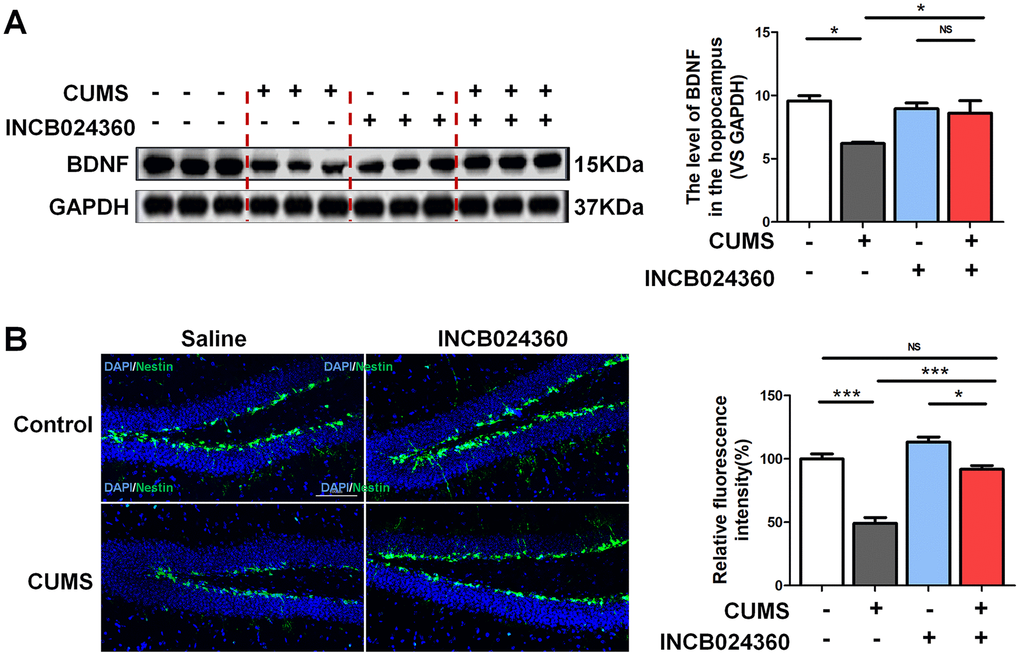 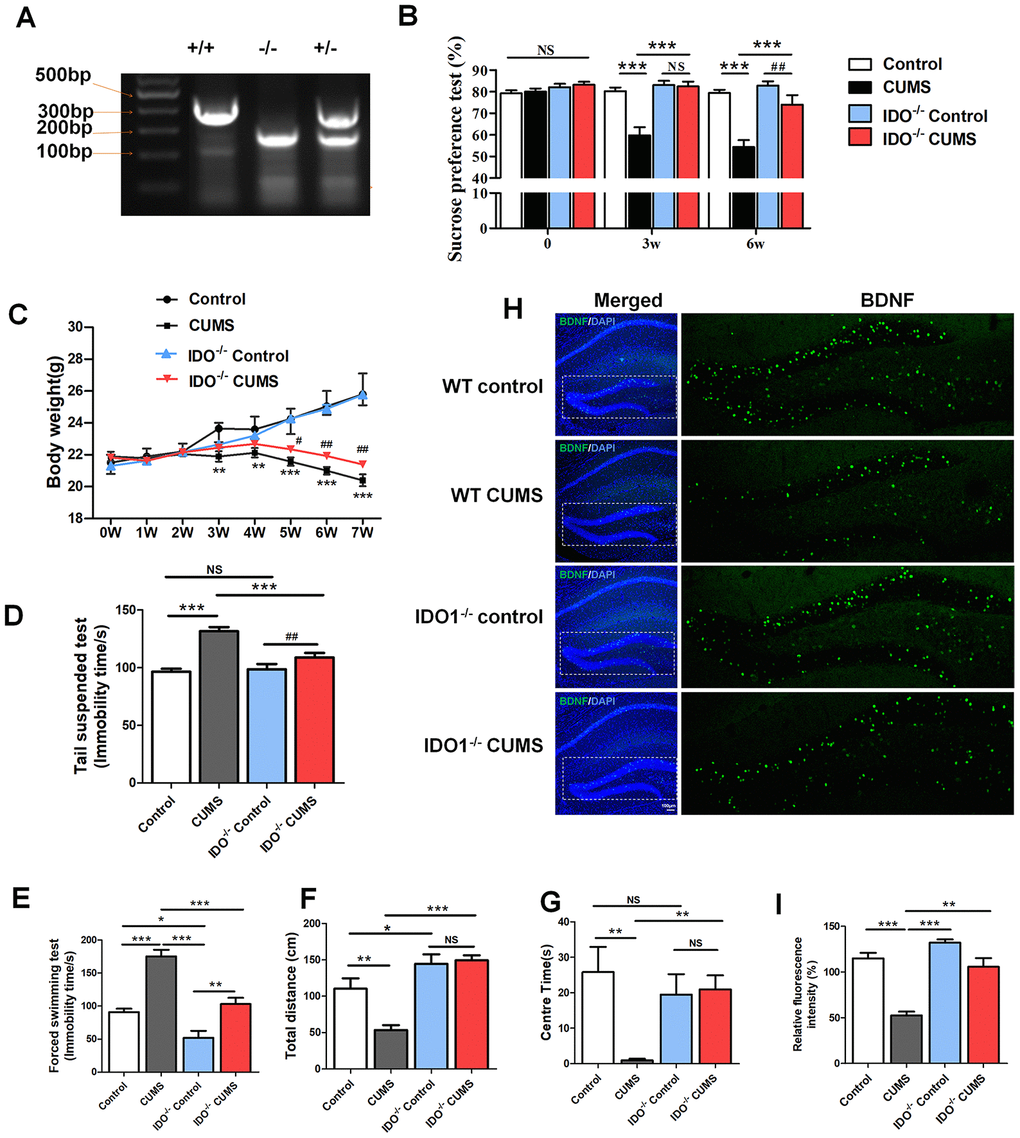 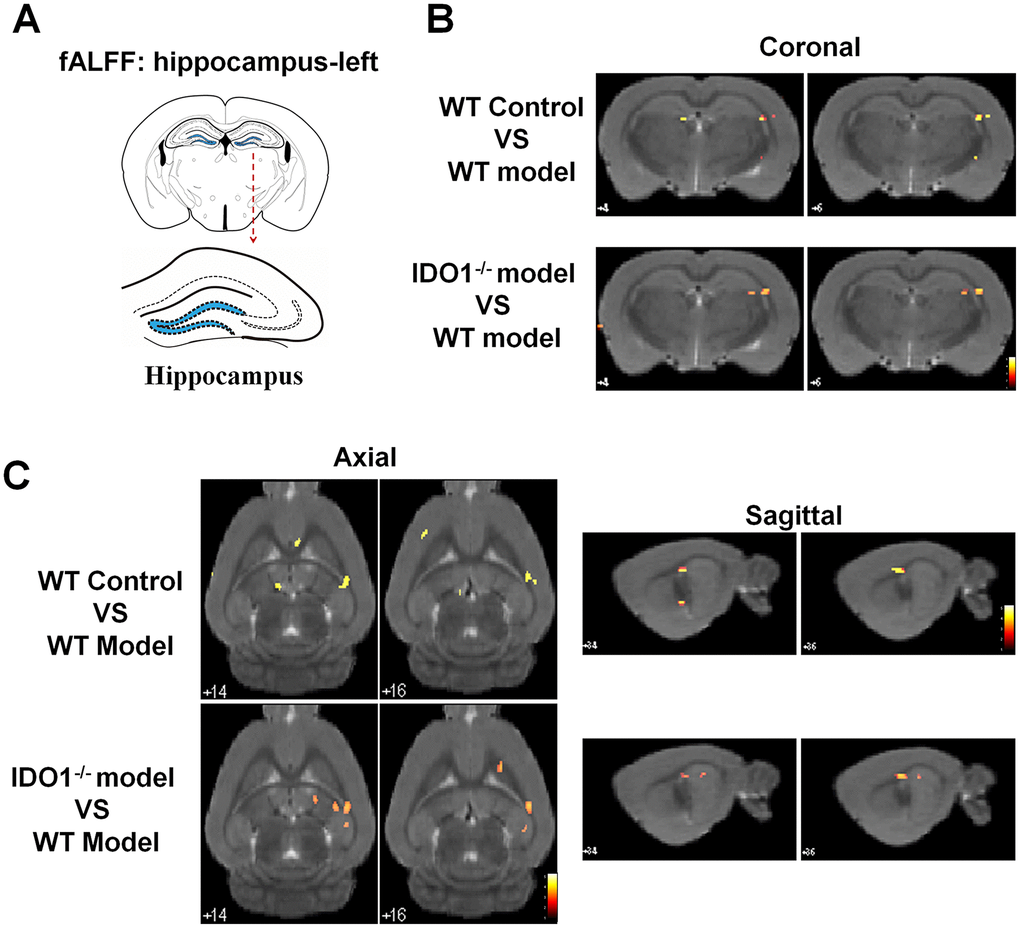 Epidemiological studies have supported a strong functional link between BDNF and 5-HT in MDD, with 5-HT being a pivotal neurotransmitter regulating BDNF function in the hippocampus [38]. As noted, gene knockout or pharmacological inhibition of IDO1 promoted stable normal expression of BDNF and immature neurons in the hippocampus. Our experimental results shown that deletion of IDO1 could effectively improve depression behaviour in the CUMS mice and indicated that IDO1 ablation could be a powerful method for controlling depression-related phenotypes. Surprisingly, based on fMRI analysis, we also found that loss of IDO1 prevented the CUMS induced disorders of BOLD signals in hippocampus, suggesting that hippocampus might be the specific region regulated by IDO1 in depression. Therefore, as a key TRP metabolism enzyme, IDO1 plays a critical role in the pathogenic mechanisms of depression associated with the regulation of endogenous KYN and 5-HT biosynthesis. Downregulation of 5-HT signalling in the hippocampus can be logically anticipated as a result of IDO1 hyperactivity in the DRN, leading to compromised 5-HT-dependent expression of BDNF in the hippocampus. These results are consistent with these findings and further indicate that a high KYN/TRP ratio, as a function of IDO1, predicts reduced BDNF levels and aberrant BOLD signals in the hippocampus.

Our findings highlight an antidepressant effect by injection of IDO1 inhibitor into the DRN of mice and raise the possibility that IDO1 is involved in controlling depression in humans and may thus represent a novel drug target. This new strategy is based on the prevention or reversal of depression-like phenotypes by targeting IDO1, whose activity and expression are pathophysiologically linked to imbalances in TRP metabolites in the brain. Since there are different subtypes of depression, future investigation is warranted to test the more detail mechanisms of IDO1 in brain functional regulation and preclinical settings with human subjects and to validate the robustness of IDO1 intervention as a therapeutic strategy.

Adult C57BL/6J mice and Ido1-/- mice (strain IDO1tm1Alm/J, Jax Strain #005867) were bred at the Animal Experimental Centre of Southern Medical University. All animals were maintained in a temperature- (21 ± 2° C) and humidity (55% ± 5%)-controlled room with a 12-h light-dark cycle, with food and water provided ad libitum. Eight-week-old mice were used at the start of the experiments. All animal studies were performed under the approval of the National Institutional Animal Care and Ethics Committee of Southern Medical University.

Tests of sucrose preference and fear conditioning, as well as the fMRI data acquisition were conducted following the previous reports [30, 31] and described in the Supplementary Material.

Methods used in this study were based on modified protocols [42–44] for stereotactic injection into the DRN of mice. Mice were anaesthetized by a combination of ketamine (0.1 mL/100 g, 100 mg/kg), xylazine (0.01 mL/100 g, 2 mg/kg) and midazolam (0.05 mL/100 g, 0.5 mg/kg). Anaesthetic doses appropriate to the mouse’s body weight (0.1 mL/10 g) were administered intraperitoneally. Then, the animal was placed in a stereotaxic instrument (RWD Life Science, China). Erythromycin eye ointment was applied to prevent corneal drying, and a heating pad (RWD, China) was used to maintain the body temperature at 37° C. A small craniotomy hole was made of a dental drill (OmniDrill35, WPI). A micropipette (KDS310, USA) connected to a Quintessential Stereotaxic Injector was used for injection. IDO1 inhibitor (INCB024360, 1mg/(kg.d)) was injected into the DRN (2 μL per injection; AP: 5.2 mm; ML: ± 0 mm; DV: 2.7 mm, with a 15° angle) for 7 consecutive days after CUMS, while WT control mice were injected with 0.9% NaCl solution. Following injection, the wound was sutured. Antibiotics (bacitracin and neomycin) were applied to the surgical wound, and ketoprofen (5 mg/kg) was injected subcutaneously. The animals were then allowed to recover from anaesthesia under a heat lamp.

Analysis by LC–MS/MS was conducted as detailed in the Supplementary Material.

Data were analysed with the SPSS software (version 20.0) and were presented as Mean ± SEM. Statistical analysis was performed by using an unpaired t-test or one-way ANOVA followed by Tukey’s multiple-comparisons test depending on experimental designs. Correlation tests were performed via Pearson's coefficient test for linear regression. Statistically significance was determined at p< 0.05.

The authors assert that all procedures contributing to this work comply with the ethical standards of the relevant national and institutional guides on the care and use of laboratory animals.