Copyright: © 2021 Zheng et al. This is an open access article distributed under the terms of the Creative Commons Attribution License (CC BY 3.0), which permits unrestricted use, distribution, and reproduction in any medium, provided the original author and source are credited.

Lung cancer remains one of the deadliest malignancies worldwide [1]. Despite current advances in lung cancer diagnosis and treatment in the era of liquid biopsy and immunotherapy, disease refractoriness and distal organ metastasis have always been tough challenges for oncologists. For example, nearly 20% of advanced non-small cell lung cancer (NSCLC) patients suffered from disease refractoriness, which significantly shortened their survival [2, 3]. Therefore, it is of vital importance to understand the underlying detailed molecular mechanism in order to develop novel therapeutic interventions.

Circular RNAs (circRNAs) are a group of novel small RNAs that function as molecular sponges that modulate the expression of microRNAs through direct binding [4, 5]. Previous studies have indicated that circRNAs play an important role in the pathogenesis of several cancers including colorectal cancer [6], hepatocellular carcinoma [7], breast cancer [8] and gastric cancer [9]. Evidence from previous studies also provided an intriguing connection of tumor epithelial to mesenchymal transition (EMT) process to circRNAs biogenesis [10], which suggests potential roles of circRNAs in the metastasis of tumor cells.

circUBAP2 has been indicated as an important promoter in proliferation and chemo-resistant in multiple malignancies [11, 12]. However, it is still not known which gene modulates circUBAP2, especially in lung cancer. Therefore, in this study, we aimed to explore the molecular impact of circUBAP2 on lung cancer tumor cells and further delineate the detailed modulatory effects on its gene targets.

RNase treatment experiment indicated that circUBAP2 was highly stable, compared with UBAP2 mRNA (Figure 1A). Further experiments demonstrated that upon treatment with actinomycin D, which is a transcription inhibitor, circUBAP2 circular transcripts exhibited significantly higher stability compared with linear transcripts of UBAP2 mRNA (Figure 1B). In addition, we compared the expression level of UBPA2 mRNA and circUBAP2 in cytoplasm and nuclear. Results indicated both UBAP2 mRNA and circUBAP2 were significantly enriched in cytoplasm (Figure 1C).

Expression of circUBAP2 in NSCLC samples 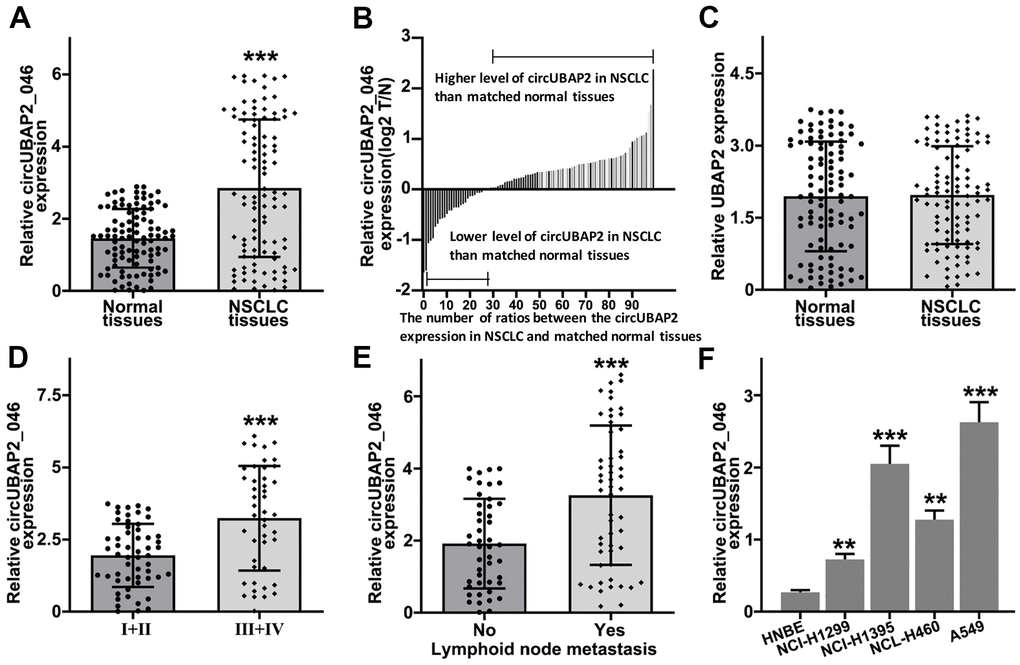 Effects of circUBAP2 on biological behavior of NSCLC cell lines 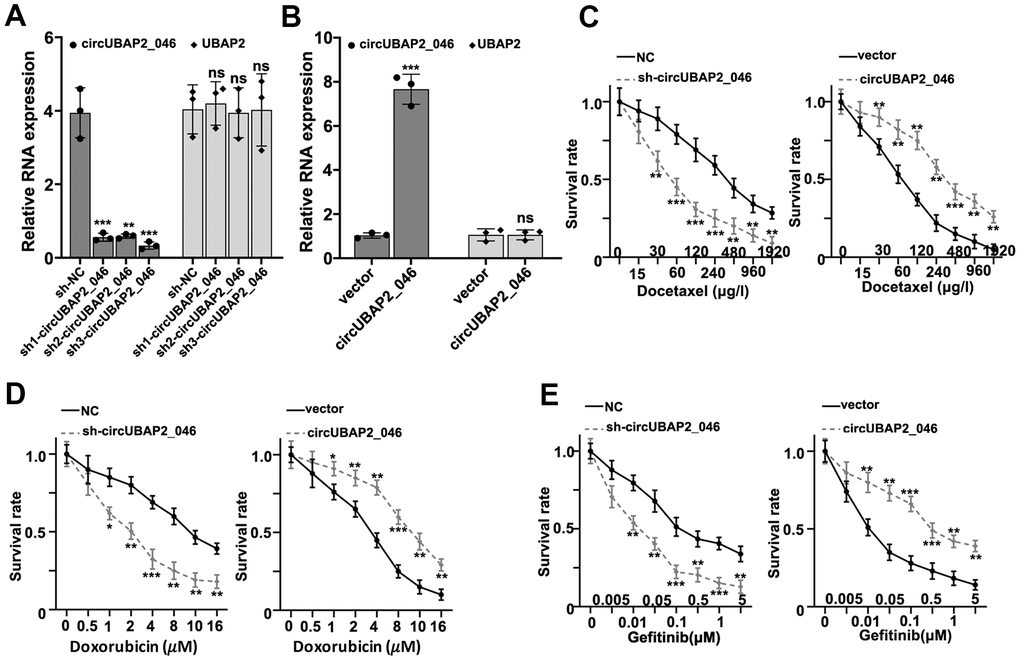 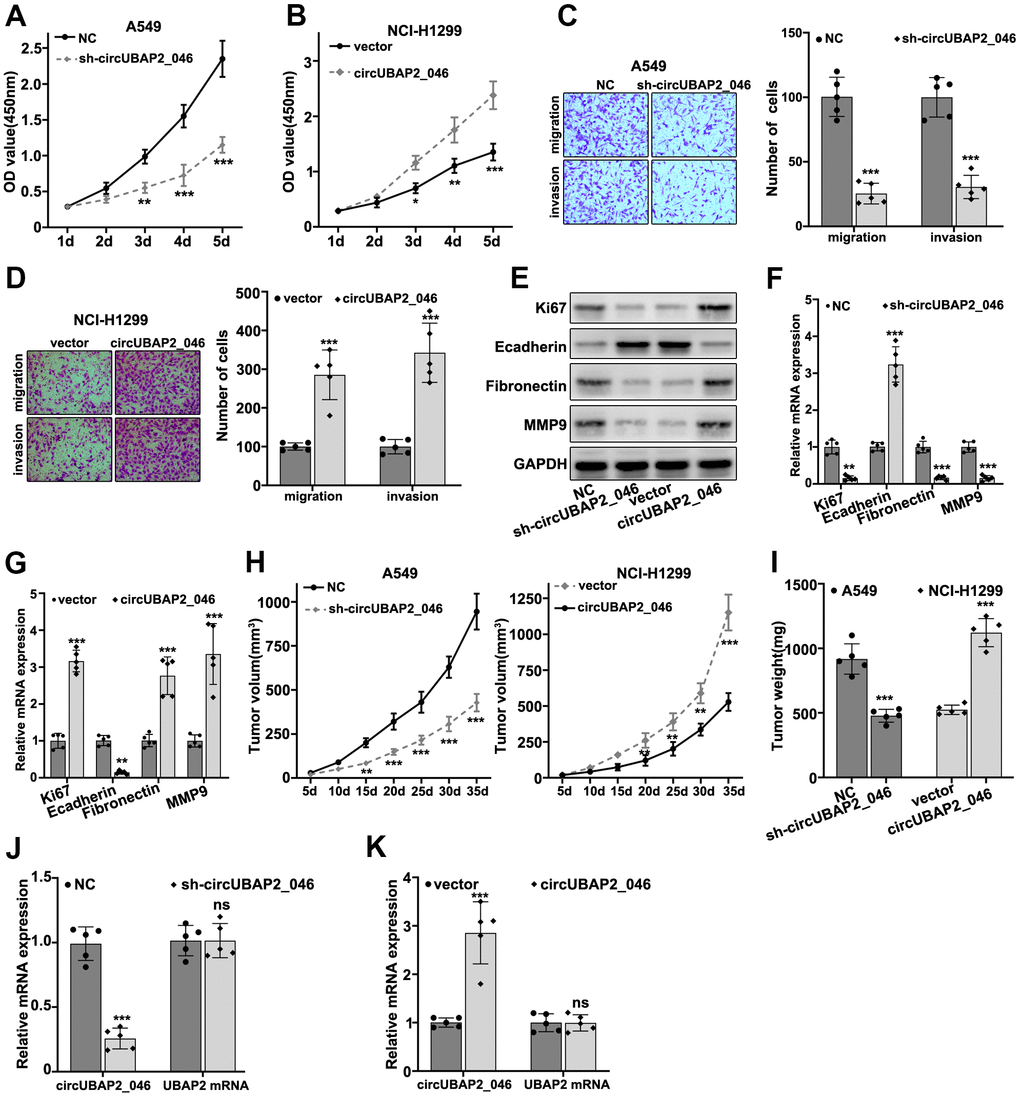 Through interaction with RNA-induced silencing complex (RISC), circRNAs modulate miRNAs expression by acting as molecular sponges. In order to further explore the detailed molecular mechanism of circUBAP2, we performed bioinformatic analysis on binding prediction of circUBAP2. As depicted in Figure 5A, miR-3182 was predicted as potential target miRNA of circUBAP2. NSCLC clinical sample analysis also confirmed that miR-3182 expression level was negatively correlated with circUBAP2 expression (P<0.001). To further validate the potential interaction of miR-3182 and circUBAP2 in vitro, luciferase reporter gene assay was conducted and results indicated that miR-3182 demonstrated significantly decreased luciferase activity compared to control group when transfected with wild-type circUBAP2, while mutated circUBAP2 vectors had no influences on miR-3182 luciferase activity (Figure 5C, 5D). Through RNA immunoprecipitation (RIP) assay, we demonstrated that in A549 and NCI-H1299 cell lines, both circUBAP2 and miR-3182 bind with Ago (Argonaute) antibodies, which is the core protein of RISC, with significantly higher level of enrichment compared with those counterparts binding with control IgG (P<0.001) (Figure 5E, 5F). Moreover, miR-3182 expression was significantly suppressed by circUBAP2 over-expression and was significantly elevated by sh-circUBAP2 treatment (P<0.001). 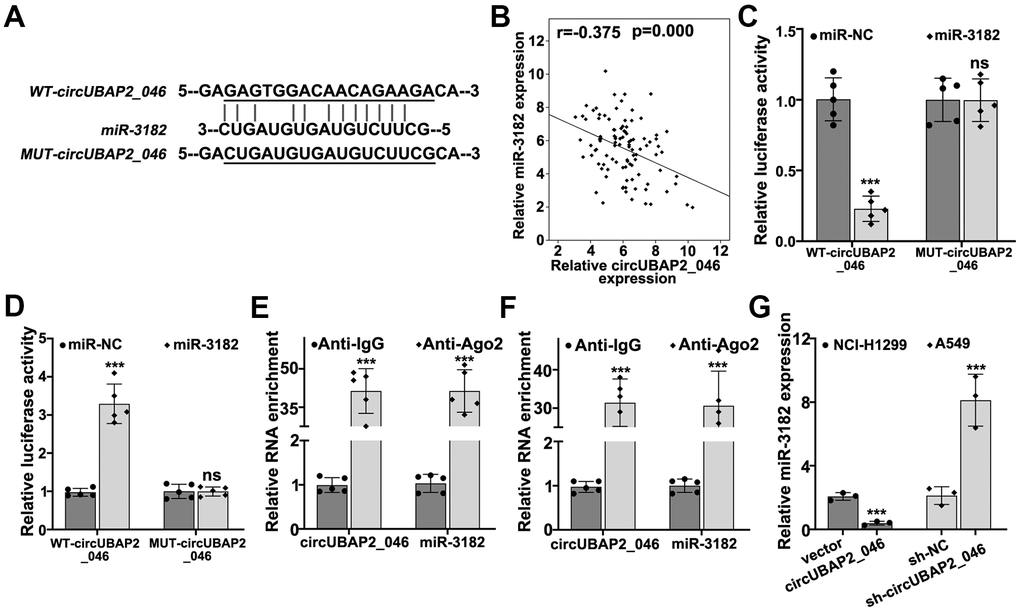 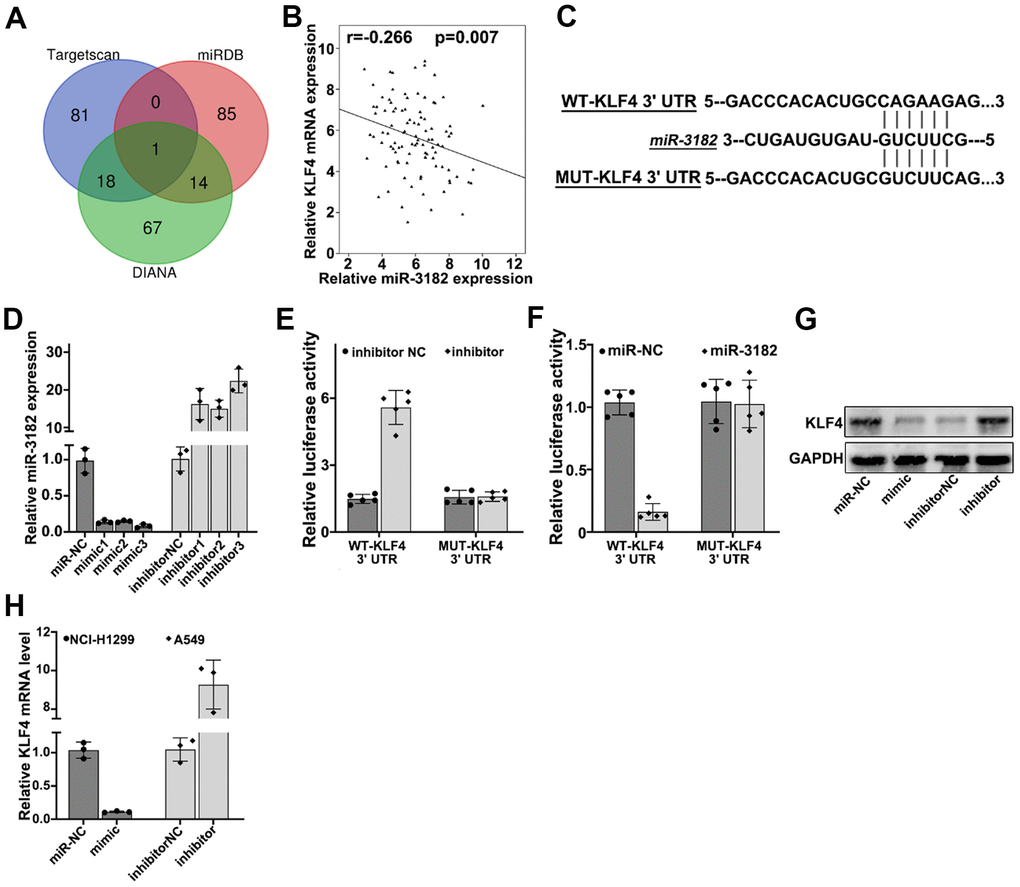 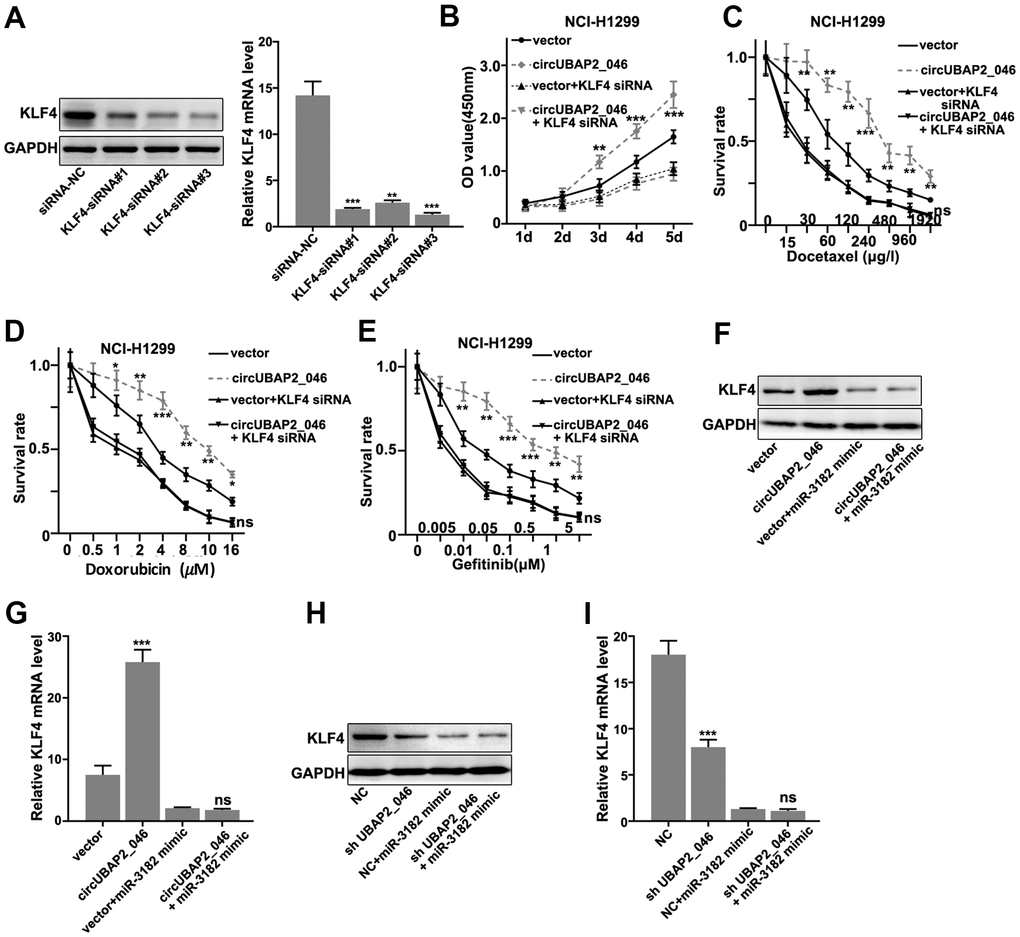 NSCLC causes severe mortalities worldwide. Despite the fact that current standard chemoradiotherapy with/without surgery are effective in majority of patients, portions of patients suffered refractory disease and distal organ metastasis. Therefore, it is of great importance to unveil the underlying mechanism of lung cancer chemo-resistance. CircUBAP2 has been implicated to exhibit influences in tumor cell proliferation and survivability in multiple cancers [11, 12]. Our study confirmed that circUBAP2 level was not only higher in tumor compared with normal tissue, but was also positively correlated with disease severity. Therefore, once confirmed in larger scale of cohort, circUBAP2 could become a potential biomarker for accurate evaluation of lung cancer severity in clinical settings. Moreover, our research demonstrated via in vitro NSCLC cell line model that circUBAP2 played an important role in modulating the cellular chemo-resistance and migration. These results provided clues that novel target therapeutic interventions could be effective in refractory cases by targeting circUBAP2.

Our further analyses indicated that circUBAP2 modulated KLF4 expression by targeting miR-3182 through acting as molecular sponges. It has been suggested in several studies that miR-3182 was dysregulated in the pathogenesis of several malignancies [13, 14]. miR-3182 down-regulation was associated with up-regulation of genes involving several vital signaling pathways in carcinogenesis and tumor metastasis, including mTOR [15] and MMP2 [14]. miR- 3182 was also investigated as target of other circRNAs, such as linc00858 [13]. Our study provided further information on the complex regulation network of interaction between circRNAs and microRNAs in lung cancer cells, which requires further delicate experiments to quantify the impact of each element respectively.

Our results also indicated that KLF4 was the main target for circUBAP2 regulatory network. KLF4 has been confirmed to exert crucial functions in the physiological process of multiple organs, including intestine, eye, skin, bone and teeth [16–19]. Interestingly, KLF4 has been previously considered as tumor suppressor in several studies [20–23]. Recent research has indicated that KLF4 demonstrated anti-metastatic effects on NSCLC cells through SIRT6/Snail/KLF4 axis [21], and anti-proliferative effects through PLAC8/KLF4 axis [22]. However, our results provided seemly conflicting evidence that KLF4 overexpression caused by circUBAP2 dysregulation generated promoting influences on NSCLC proliferation and chemo-resistance. Other researchers also claimed that KLF4 could also serve as an oncogene under specific cellular conditions [24, 25]. Therefore, it is of value to further delineate the exact role of KLF4 on lung cancer pathogenesis and disease progression as well as metastasis. Moreover, other potentially affected gene pathways by circUBAP2 and miR-3182 should also be further investigated to fully understand the impact of circUBAP2 dysregulation on NSCLC patients.

It is worth mentioning that our study was generally based on limited number of clinical samples and in vitro cell line models, future studies of expanded clinical cohorts and in vivo animal models are required to further validate our findings in this study.

Our study demonstrated for the first time that circUBAP2 played an important role in promoting proliferation, invasion and chemo-resistance of NSCLC tumor cells. circUBAP2 might be informative biomarker for NSCLC clinical severity and metastasis prediction. circUBAP2-miR3182-KLF4 regulative network demonstrated in this study could be a novel therapeutic target for future NSCLC treatment.

Our clinical cohort was recruited from patients diagnosed of NSCLC in cancer center from Aug 2018 to Jun 2019. A total of 60 patients’ tumor biopsy samples and adjacent normal tissues were retrieved during surgery. No prior treatments were conducted before surgery. Tissues were stored using liquid nitrogen immediately after resection for subsequent experiments. The study was approved by Ethical Committee of Fujian Provincial Hospital. Informed consent was obtained for all patients enrolled in this study.

NCI-H1299 and A54-9 cells were placed into 8-well plates at the density of 1x106 cells per well. Lipofectamine 2000 (Invitrogen, Carlsbad, CA, USA) was used for transfection of vectors including circUBAP2_46 overexpression plasmid, miR-3182 mimics and inhibitor, sh-CircUBAP2_46, KLF4 siRNAs according to the instructions of manufacturer.

Cells were inoculated into 96-well plates at a density of 1×103 cells/well. 10 μL of Cell Counting Kit-8 (CCK-8; Dojindo Molecular Technologies, Kumamoto, Japan) solution was added to each well after 1d, 2d, 3d, 4d and 5d, respectively, followed by incubation at 37° C for 1 h. The absorbance was recorded by a microplate reader of each well at 450 nm.

1×106 Cells for each group were treated with escalated dosage of Docetaxel, Doxorubicin Gefitinib for 4h, and then cells were washed with cold PBS, and then incubated in 75% ethanol at -20° C overnight. Cells were stained with 10 μL propidium iodide (PI) and Annexin V-FITC (Thermo Fisher Scientific) for 20 min at room temperature, and apoptotic cells were analyzed by flow cytometry (FACScan™, BD Biosciences, Franklin Lakes, NJ, USA). 5×104 transfected cells were seeded into the upper chamber (8-μm) (Corning, Lowell, MA, USA). The medium with 10% fetal bovine serum (FBS; Gibco, Grand Island, NY, USA) was added to the bottom chamber. The cells were incubated under 37° C, 5% CO2 condition for 48 h. Penetrating cells were fixed in 70% ethanol for 30 min and stained with 0.1% crystal violet for 10 min. Five randomly selected fields per sample was counted for the number of penetrating cells.

Nuclear proteins of cells were extracted according to the manufacturers’ instructions. 10% of the total nuclear protein was used as input control. The remaining protein were incubated with anti-IgG and anti-Ago2 antibodies at 4° C for 3 h, and subsequently incubated with protein A/G plus-agarose at 4° C overnight. The proteins were then centrifuged at 4° C, 2000 r/min for 1 min. The precipitate was then re-suspended in NETN100. 10% of precipitate, protein level was quantified using input control and IgG sample. Meanwhile, the remaining samples were used for RNA isolation, purification and identification.

Ethics approval and consent to participate

The study was approved by Ethical Committee of Fujian Provincial Hospital (Approval number: 2019-36). Informed consent was obtained for all patients enrolled in this study.

This work was supported by the Sailing Fund Project of Fujian Medical University (No.2016QH114).