Copyright: © 2021 Lin et al. This is an open access article distributed under the terms of the Creative Commons Attribution License (CC BY 3.0), which permits unrestricted use, distribution, and reproduction in any medium, provided the original author and source are credited.

Aim: Circular RNAs (circRNAs) control gene expression in a series of physiological and pathological processes, but their role in heart disease is unknown. This research illustrates the role and potential mechanism of circRNA in cardiac hypertrophy.

Cardiac hypertrophy can be divided into physiological and pathological types related to normal cardiac function and impaired cardiac function [1, 2]. Pathological hypertrophy of the myocardium is associated with several adverse cardiovascular events, including arrhythmias and heart failure. Studies have shown that chromatin remodeling and histone modification play essential roles in myocardial development and heart disease [3]. Non-coding RNAs are critical participants in cardiovascular physiological and pathological processes [4]. One of the non-coding RNAs, miRNAs, are 20–23 nucleotide RNAs that mediate various physiological functions and diseases by regulating target genes. Previous reports showed that miR-498 [5], miR-206 [6], miR-155 [7], and miR-451 [8] were all involved in cardiac hypertrophy progress.

Circular RNA (circRNA) serves as an essential class of non-coding RNA (ncRNA) and is mainly produced by reverse splicing of mRNA from the 3′ and 5′ end precursors of thousands of exons in eukaryotes [9, 10]. Increasing evidence has identified that circRNAs possess the binding sites of miRNAs and function as sponges of miRNAs to regulate target genes [11, 12]. CircRNA is involved in a variety of heart disease processes [10, 13]. Pan RY et al. found that 66 circRNAs are involved in the regulation of coronary artery atherosclerosis and may be applied as the therapeutic or diagnostic markers [14, 15]. ATP2A2 performed a ceRNA relationship with hsa_circ_0046159, which could regulate chronic thromboembolic pulmonary hypertension within the miR-1226-3p-circRNA regulatory network. [16]. Circ-HIPK3 promoted function of adrenaline via controlling miR-17-3p binding with ADCY6 during heart failure [17]. In addition, CircFndc3b modulates FUS/VEGF-A axis after myocardial infarction and performs a protection effect [18].

Here, we performed that circ_0001006 was induced in cardiac hypertrophy mice and Ang II-treated cardiomyocytes, which displayed pro-hypertrophy effect by inhibiting miR-214-3p and demonstrated a mechanism of circ_0001006 via the miR-214-3p/PAK6 axis.

Upregulation of circ_0001006 in cardiac hypertrophy mice and AngII-treated cardiomyocytes

Firstly, the mice were randomly divided into two groups, including sham and TAC group. The TAC group performed the ventricles wall thickened. We also overserved the enhanced heart weight to body weight (HW/BW) ratio (Figure 1A and 1B). We observed the expression of the biomarkers indicating hypertrophy, such as ANP, BNP, and β-MHC, by RT-PCR and Western blot assays. The result showed an increased level in the TAC group compared with the sham group (Figure 1C and 1D). Then, a microarray was performed to screen the differential expression of circRNA. Among them, circ_0001006 was the most significant change in TAC tissues (Figure 1E). RT-PCR assays results were also performed that circ_0001006 was upregulated in the TAC group (Figure 1F). 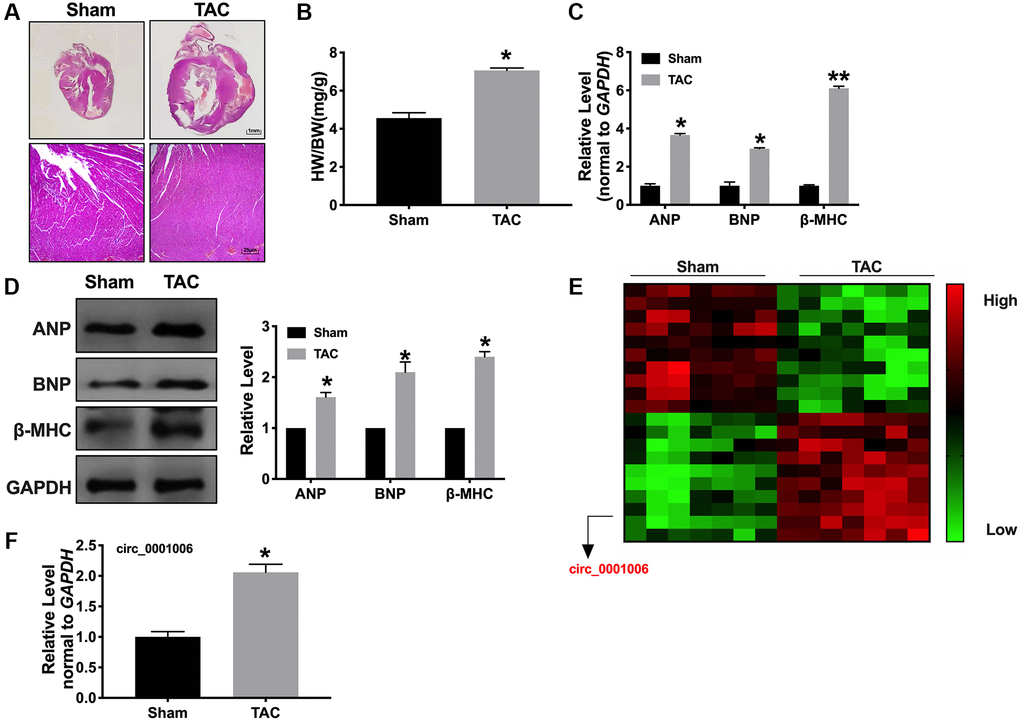 Then, we would like to determine whether the loss function of circ_0001006 performs inhibition function on cardiac hypertrophy, and we, therefore, created short hairpin RNA (shRNA) sh-circ_0001006 or sh-Scramble (sh-Scr) and transfected into cardiomyocytes treated with Ang II (200 nmol/L) for 48 hrs (Figure 4A). The cell surface area was performed by immunofluorescence (Figure 4B), loss function of circ_0001006 decreased cell cross area and the protein/DNA ratio after disposing of Ang II (Figure 4C), the levels of hypertrophic markers were also reduced compared with the sh-Scr group (Figure 4D and 4E). 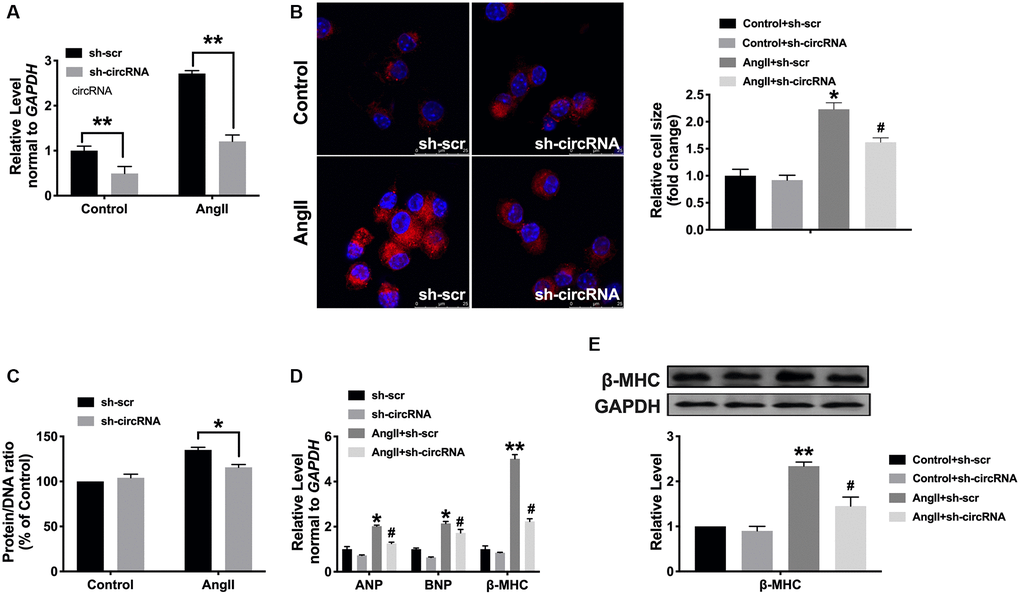 Figure 4. Silencing of circ_0001006 prevents cardiomyocyte hypertrophy. (A) The transfection efficiency of sh-circ_0001006 was verified. (B) Representative immunofluorescence results performed the effect of knocking down circ_0001006 (The scale bar is 25 μm). (C) Protein/DNA ratio of the cardiomyocytes after transfecting with sh-circ_0001006/sh-Scr treated with or without Ang II. (D) ANP, BNP, and β-MHC expression level in cardiomyocytes. (E) The expression of β-MHC in cardiomyocytes. *P < 0.05 and **P < 0.01 vs. Control+sh-scr group, #P < 0.05 vs. Control+sh-circRNA. Data are shown as mean ± SEM. All experiments were repeated at least three independent experiments. 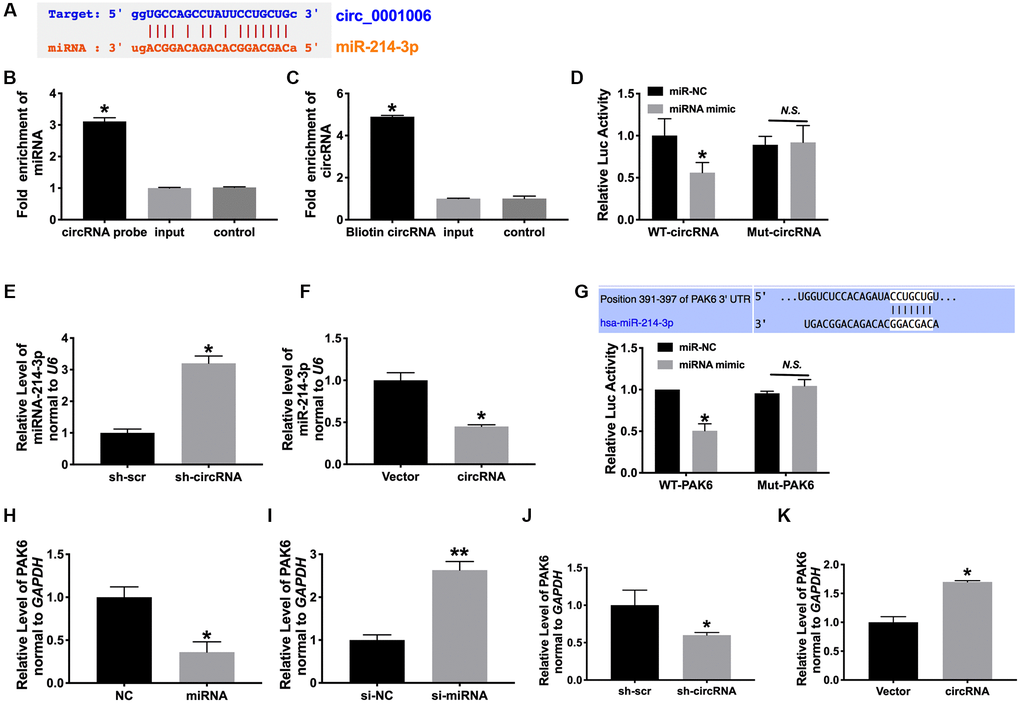 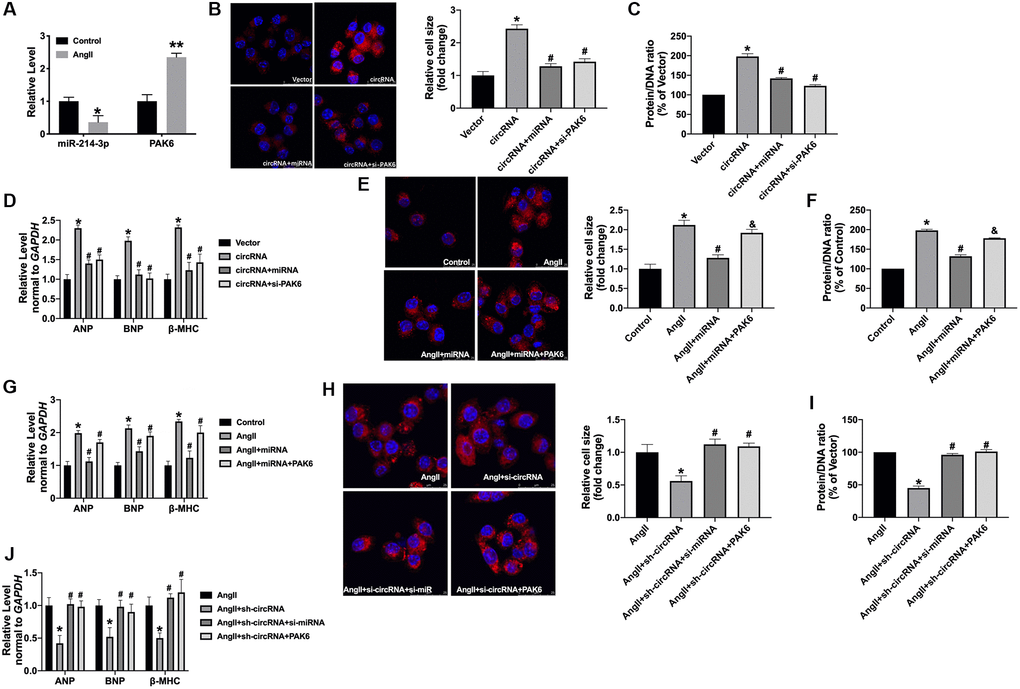 Figure 7. Knockdown of circRNA_0001006 alleviated cardiac hypertrophy in vivo. (A and B) EF (%) and FS (%) were assessed by echocardiography. (C) The histogram results of HW/BW ratios in different groups. (D) Western blot assay analysis of ANP, BNP, and β-MHC expression level in the tissue. (E) Representative histological results of the (H and E) Staining of the mouse heart tissues. (F) The AAV9 transfection efficiency of circ_0001006 in the mouse heart. (G) The miR-214-3p level in heart tissue. (H) The mRNA level of PAK6 in mice. *P < 0.05 and **P < 0.01 vs. Sham+AAV9-sh-scr group, #P < 0.05 vs. Sham+AAV9-sh-circRNA group. Data are shown as mean ± SEM. All experiments were repeated at three independent experiments.

Pressure load-induced cardiac hypertrophy was mediated by different signaling pathways. Signaling pathways are numerous, link between each other, and form a complex network. Exploring the occurrence and development of cardiomyocyte hypertrophy is of profound significance for the prevention and treatment of myocardial hypertrophy.

Due to its unique molecular biological characteristics, circRNA plays a crucial role in the diagnosis of a variety of diseases. However, the fact that circRNAs are highly maladjusted in condition and exhibit a high degree of tissue and disease specificity makes them ideal candidates for disease diagnosis. CircRNA also plays a decisive function in heart disease. It was reported that circRNA_000203 suppressed miR-26b-5p/miR-140-3p to abolish the inhibition of Gata4, which aggravates cardiac hypertrophy [21]. As an endogenous sponge, circSlc8a1 can interact with miR-133a in cardiomyocytes, which indicated circSlc8a1 might play a key role in cardiac hypertrophy [22].

In previous reports, circ_0001006 was identified as a potential biomarker and therapeutic target in breast cancer brain metastasis [23]. In the plasma of gastric cancer patients, circ_0001006 may be used as diagnostic indicators due to anomalous change [24]. Up to now, studies of circRNA in heart disease, especially in cardiac hypertrophy, are limited, which requires us to explore the characteristics and mechanisms further. Our data report that circ_0001006 interacted with miR-214-3p. Functionally, circ_0001006 could promote the increases of cell cross area and the level of biomarkers, ANP, BNP, and β-MHC in Ang II-treated cardiomyocytes by targeting miR-214-3p.

All mice were fed under standard conditions, with standard food and water. Adult male C57BL/6 mice (~25 g, 8 weeks) previously described were used in this study [25]. Cardiac hypertrophy was induced by TAC (transverse aortic constriction) operation. The similar surgery without ligation was conducted in the sham group. Then the mice were fed for 4 weeks. Before 1 week of TAC surgery, the animals were injected with AAV9 sh-Scr or sh-circ_0001006 (Biocobio, Tianjin, China) was injected in the left ventricle myocardium. The effect of AAV9 reaches highest about 3 weeks. The animal study was reviewed and approved by Baotou Medical College.

TRIzol reagent (Invitrogen) was used to extract total RNAs from heart tissues, followed by the quantified analysis (NanoDrop). After the standard protocol of Arraystar, we conducted the microarray hybridization. Briefly, fluorescent complementary RNAs (cRNAs) were produced from the purified RNAs and hybridized in circRNA array. The arrays were scanned by Agilent Scanner G2505C and the images and the data were analyzed by gilent Feature Extraction software (version 11.0.1.1) and R software, respectively. The differently expressed circRNAs were shown in the heat map based on the criteria (fold change >2 and P < 0.05).

The cardiac function was analyzed by echocardiography measurement with a Vevo 2100 Imaging System furnished with a 30 MHz phased-array in mice with TAC for 8 weeks. Diastolic and systolic volumes were acquired by applying Simpson’s rule of discs to the serially acquired short-axis images (Table 1).

Cells were fixed with 14% formaldehyde and embedded in paraffin. Immunohistochemical staining was performed according to the instructions of the primary antibody (α-actinin, Abcam, Cambridge, UK). The nucleus was stained using DAPI. The images were observed by an optical microscope (Olympus, Japan).

The cells were washed using PBS and subjected in the cellular protein and DNA content quantitative analysis. The sample was centrifuged (10,000g, 10 minutes) after the treatment of 0.2 N perchloric acid (1 ml), followed by the incubation of NKOH (250ml, 0.3N, 60°C, 20 minutes). The Lowry method was used to analyze protein content, in which serum albumin served as the standard. The Hoechst dye 33258 was used to analyze DNA content, in which salmon sperm DNA served as the standard.

Cells were transfected with vectors and/or oligonucleotides indicated in each experiment. RNA, and were treated with Trizol reagent (Sigma, USA) to isolate total RNA. The RNA was reverse-transcript to cDNA by using a superscript reverse transcriptase (Invitrogen, Carlsbad, CA), and quantified by a ViiA7 Quantitative PCR System (Applied Biosystems, Carlsbad, CA). The relative change of RNA levels was calculated by 2–ΔΔCT method and normalized to GAPDH or U6.

The wild type sequences or mutant sequence of circ_0001006 and 3′UTR region of PAK6 were cloned into the pmirGLO vectors (Promega, USA). The cells were transfected with circ_0001006-WT and Mut, or PAK6-WT and Mut, along with miR-214-3p or NC. After 48 hours incubation, the cells were lysed and the luciferase intensity was detected by a Dual Luciferase assay kit (Biovision, China).

Cells with the indicated treatment were lysed by ice-cold RIPA buffer (Thermo, USA) added with a cocktail of protease inhibitors (Thermo). The lysates were then subjected to the SDS-PAGE and shifted to nitrocellulose membranes (absin, China). The protein bands were interacted with primary antibodies at room temperature for 2 hours and 4°C overnight, followed by secondary anti-mouse and anti-rabbit antibodies. The bands were then visualized by using an Odyssey in an Odyssey software (LI-COR, USA).

The heart tissue was gathered and fixed in 4% paraformaldehyde for 24 hrs. Then the fixed tissues were embedded in paraffin. Next, a Paraffin slicer machine was used to cut slices (5-μm cross-sectional). H&E staining was used to evaluate cardiac morphology. The results were calculated with image J 6.0.

Biotin-coupled miRNA and circRNA pull-down assays were executed according to the protocol [27, 28]. Briefly, HEK293 cells were transfected with 3′ end biotinylated circ_0001006 (20 nM) for 1 day. 4 MyOne streptavidin C1 Dynabeads was carried out to pull down biotin-coupled RNA complexes. The enrichment of circ_0001006 or miR-214-3p was measured by PCR.

All data is statistical as a mean ± S.E.M. We performed Student’s t-test or a one-way ANOVA for statistical analysis. P < 0.05 was described as statistically significant.